12 Things about Luxor Temple in Egypt

1. Where is Luxor Temple?

Luxor Temple is located on the east bank of the Nile River of Luxor. Just 2 km away from Karnak Temple.  It is the west side of Karnak Temple.

2. Why Luxor Temple was built?

It was dedicated to the king of the Egyptian gods Amon-Ra, his consort Mut, and their son Khons. The temple consists of a large court and a complex of halls ad chambers beyond. 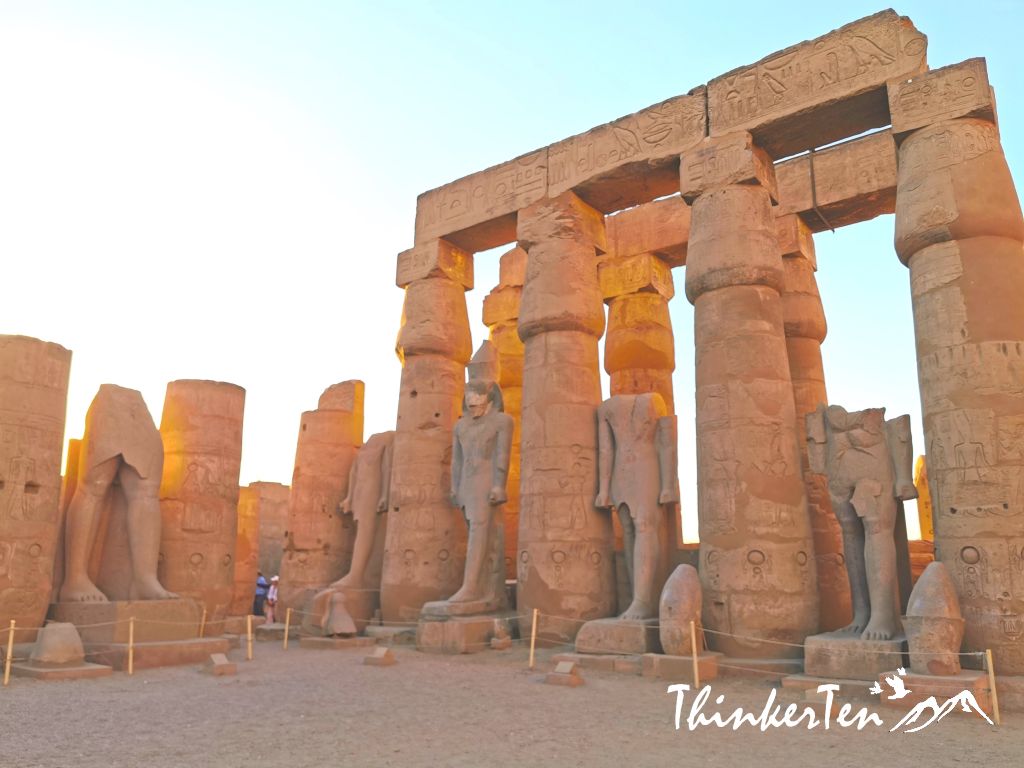 3. Who were the pharaohs that built Luxor Temple?

Yes and no, if you want a fast tour, do it with a guide.  A guide will explain all the important things to look at in the temple. If you like to have some quiet time alone, take your own sweet time to shoot pictures, you can do without a guide and you can still explore it yourself with a guide book or do your own research beforehand.

5. What to expect at the entrance?

At the entrance, there are 6 giant statues of Ramesses II, with two seated.  The other one did not seem to survive and the face was gone.  The statues are huge and you will realize Ramesses love building big statues of himself. When I said big, it meant giant.  Those big statues will make you feel like a midget. 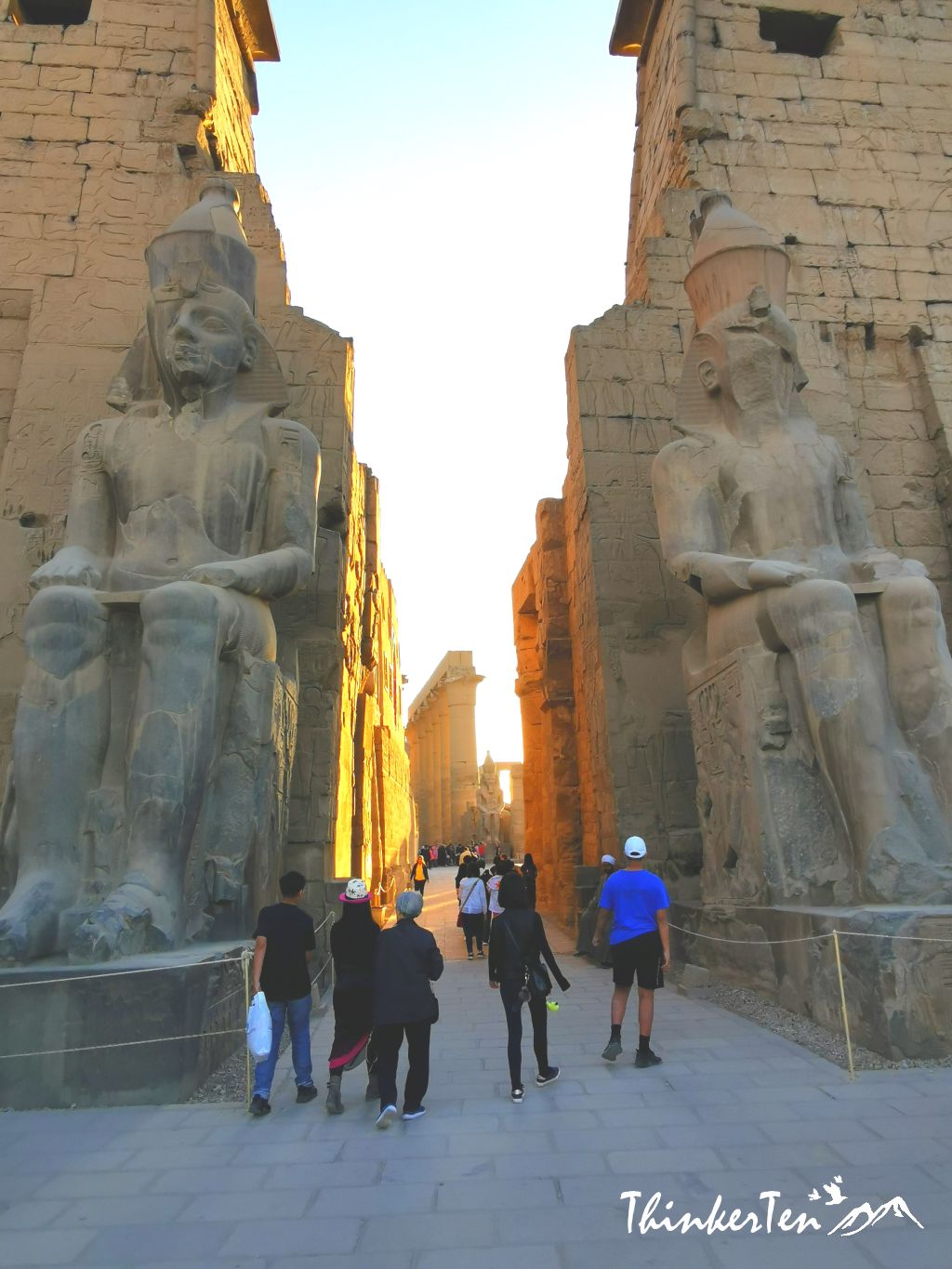 6. Where is another obelisk gone to?

There are two obelisks originally but you can only find one now and it is in pink. The other one was given to France and trade in a clock at the Mohammed Ali Mosque in Cairo. 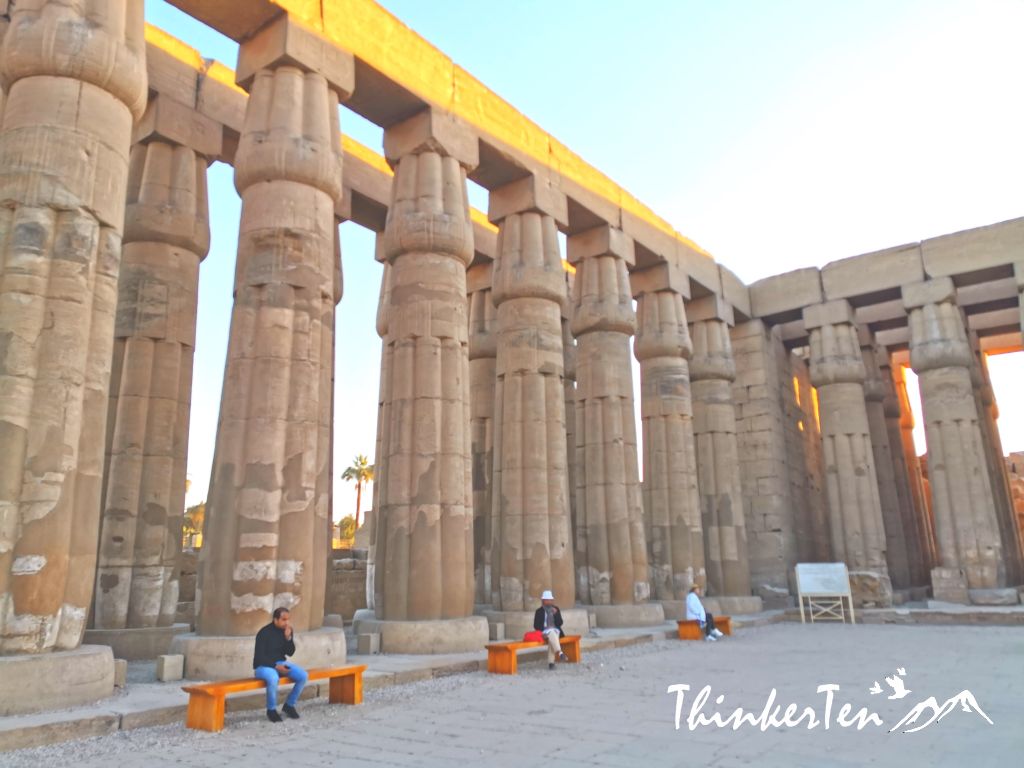 7. How many giant columns altogether?

The big columns were carved to represent a papyrus flower. Total of 74 papyrus columns.  The papyrus plant grows in the Nile river and ancient Eygptian used this plant to make a variety of things, such as paper and perfume.

8. Can you spot King Tut’s statue?

Statues of a young Tutankhamun and his consort Ankesenamun outside at Luxor Temple, Luxor, Egypt.

9. Where is Alexander the Great in Luxor Temple?

On the sandstone walls, you will see carved and painted details of hieroglyphics texts and temple ritual scenes. Luxor temple is a ceremony place for the Pharoah to celebrate their festivals.

You also see Alexander the Great name in hieroglyphics inside a small chamber. 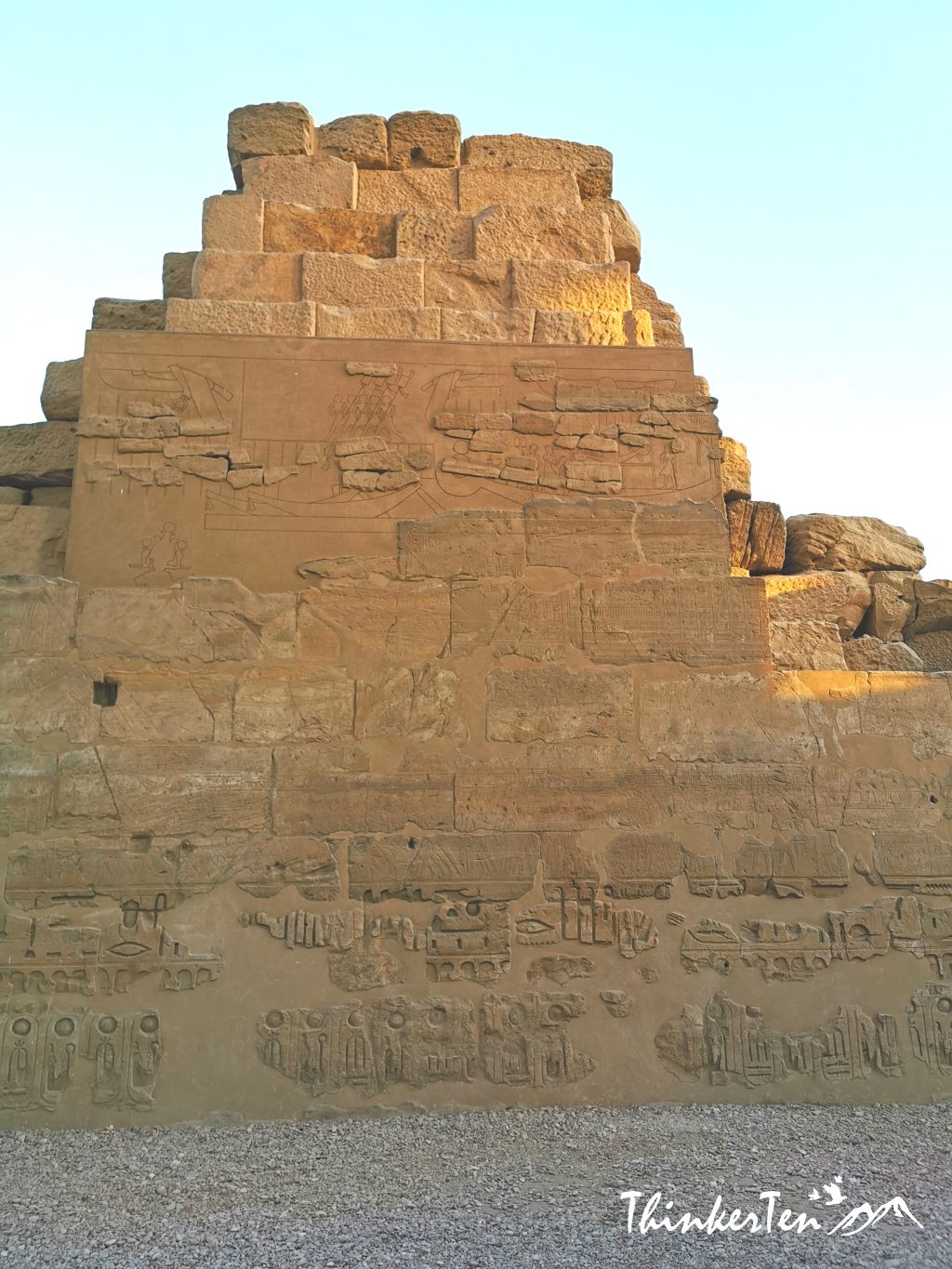 10. Why all Christians and Muslims were here?

It is interesting to find some Christian paintings on the wall in Luxor Temple. During the Roman era, the temple was used by the Roman government and they made this place a church.  Later, a mosque (13th-century Mosque of Abu el-Haggag) was built that continues to be used today.

How cool to find Egyptian, Christianity and Muslim history all are in one place. 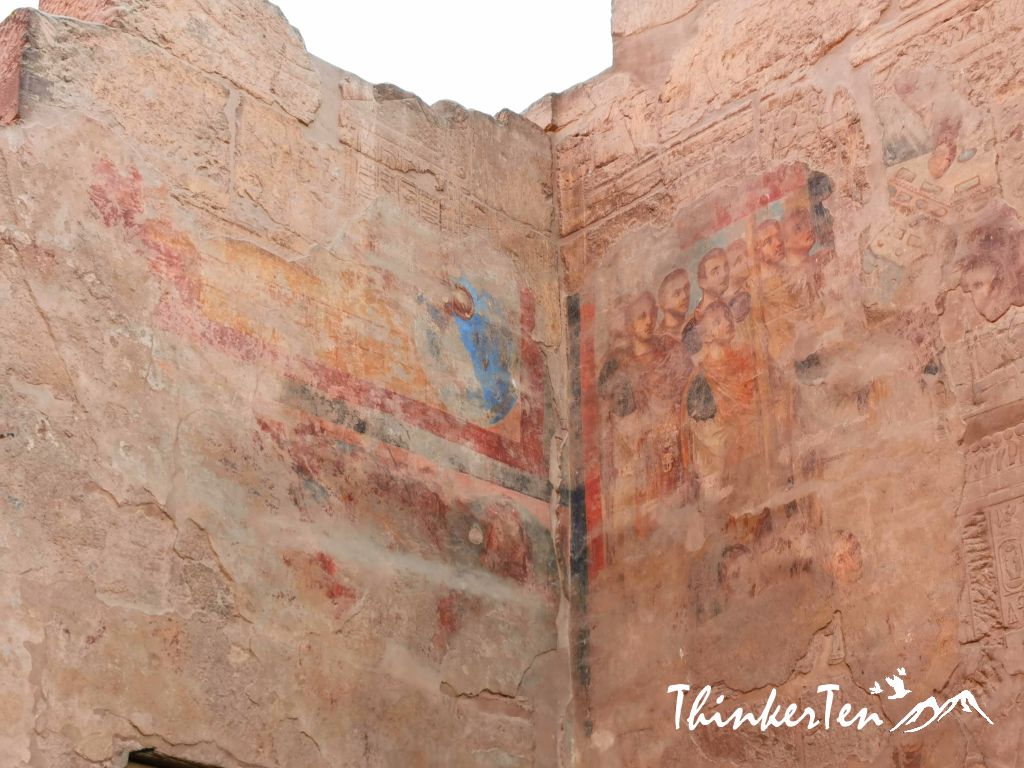 11. Where were these sandstone blocks coming from? 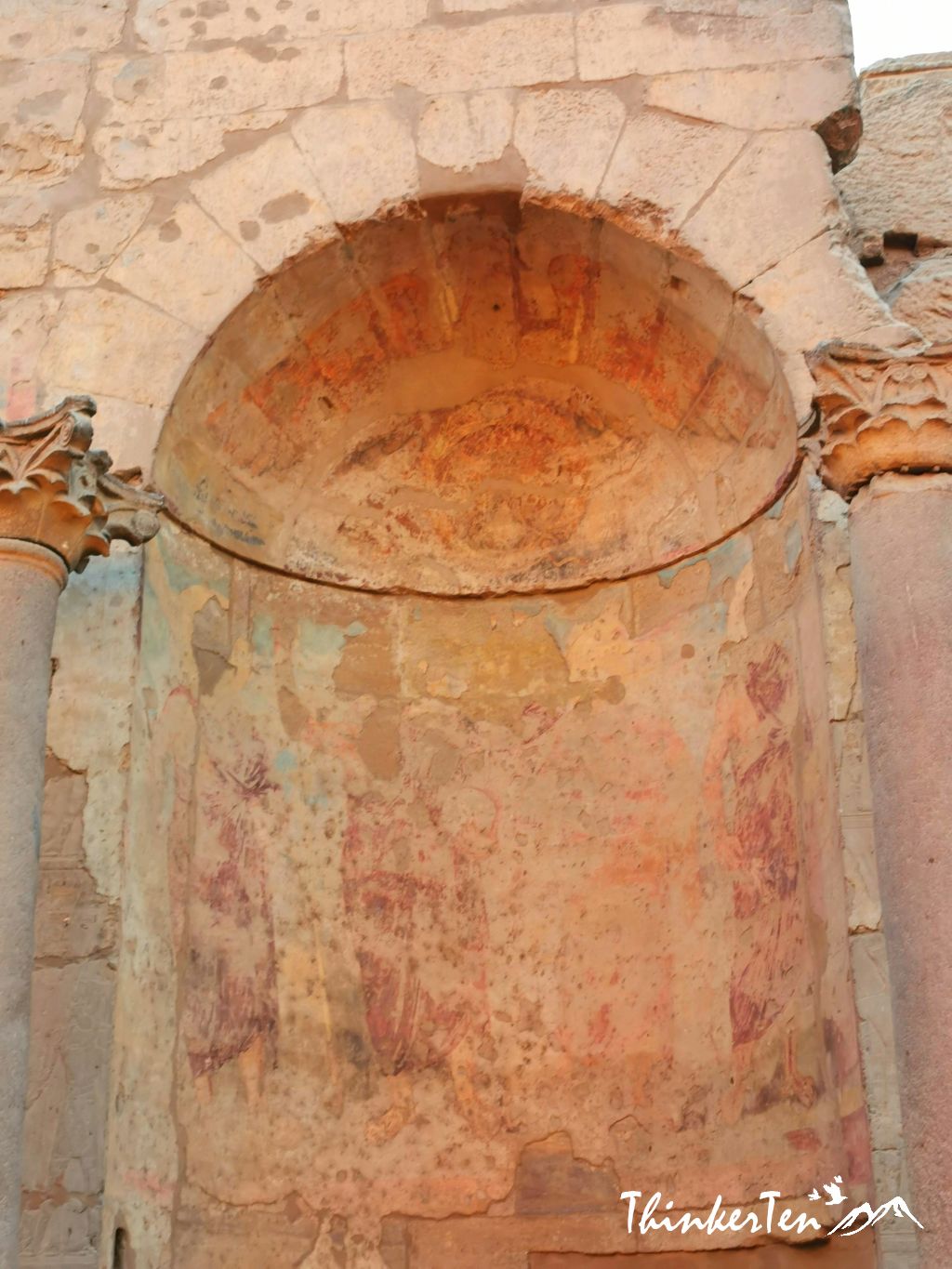 The crowds are always there in Luxor Temple, so visiting early before the crowds arrive. You can always come back after sunset when the whole place is lit up. It will be a different scene totally.

Egypt is so high on my list. I love seeing all of the incredible things to do here! Can’t wait to hopefully visit it this summer

Egypt is definitely somewhere I want to visit, and Luxor looks incredible. I’ll definitely remember these tips in the future, especially about visiting early. I hate crowds!

Your pictures are so cool! This looks like a really neat place to visit!

Egypt seems like an adventure awaiting to be discovered. I would love to go and visit Luxor it seems as if you had a marvelous experience.

I am loving these pictures from your time at the Luxor Temple in Egypt. I definitely learned a lot about the temple reading this post.

Wow such wonderful photos, it looks steeped in history and a real delight to visit.

The Luxor Temple is stunningly beautiful and I truly enjoy your travel posts! I so would love to get to Egypt as I was always intrigued with their history and such. My favorite subject for sure and need to see for myself. Thank you for sharing… and someday 🙂

The more I read about Egypt, the more I want to visit. I am hoping we can take our girls sometime in the next few years.

I love these travel posts you do. It all looks so beautiful.

How interesting to find out that the Luxor Temple has Christian drawings on the wall and the temple later became a mosque. I would love to see this temple in person.

This is on my travel bucket list. I am hoping I can take my son and explore the beauty and history of this place soon