Our River Nile cruise stopped at Aswan city and we will visit Abu Simbel which is about 3 hours desert drive from Aswan. Our bus departed at midnight at 2 am to drive us from Aswan to Abu Simbel, hoping to arrive at around 5 am to watch the sunrise at around 6 am. This is the second time we traveled at midnight in Egypt so we would expect roadblocks from the security checkpoints. But the highway leading to Abu Simbel, there are a lot more security checkpoints.  Over here, you can’t drive without a permit license, there is a police car in front leading our bus to Abu Simbel.

You can view vlog of Abu Simbel 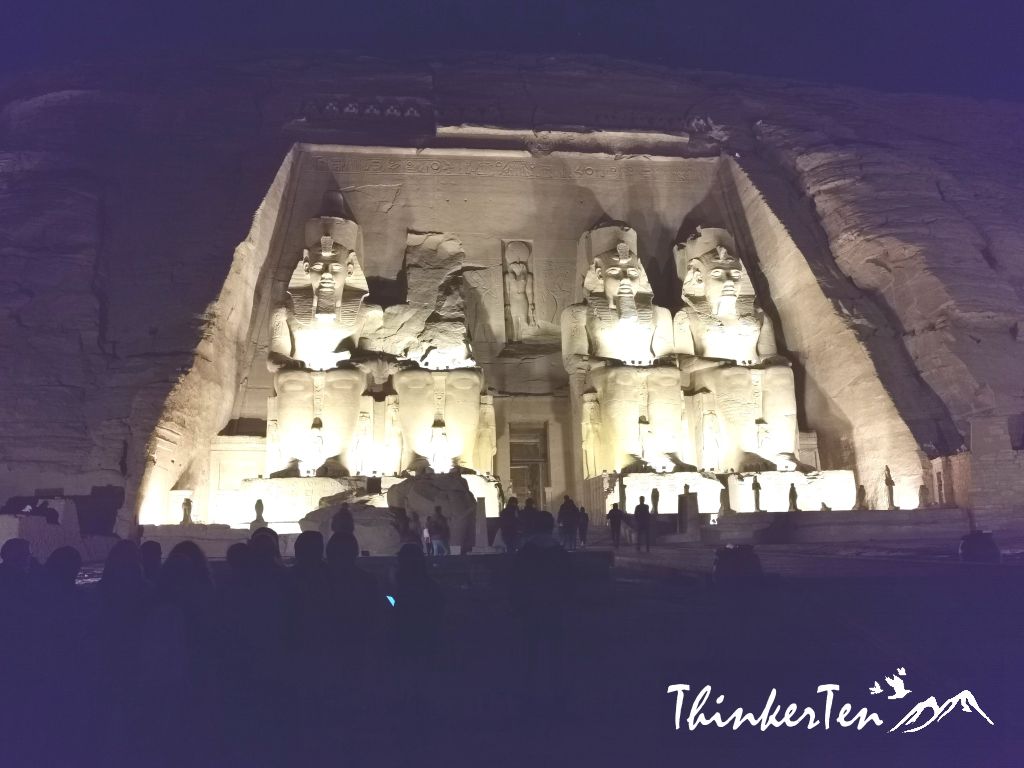 The main temple was dedicated to the gods of Amun, Ra, and Ptah, and to Rameses himself.

These seated statues (picture below) are Amun, Ra, Ptah and Rameses II himself. He made himself a god too and let people worship him.

The design of the temple is highly related to sunlight. The original construction allowed the sun to light the inner chamber twice a year which happens only twice a year, which is on Feb 22 and Oct 22.  These two special dates are meant to mark the anniversary of Rameses ascension to the throne on February 22 and on his birthday on October 22.  Sunlight on these two dates will shine exactly on the status of these gods, with the exception of Ptah god as he was the god of the underworld.

The Abu Simbel temple was built in celebration of the victory of the Battle of Kadesh against the Hittites. You will find some of the walls inside are carved with battle scenes. 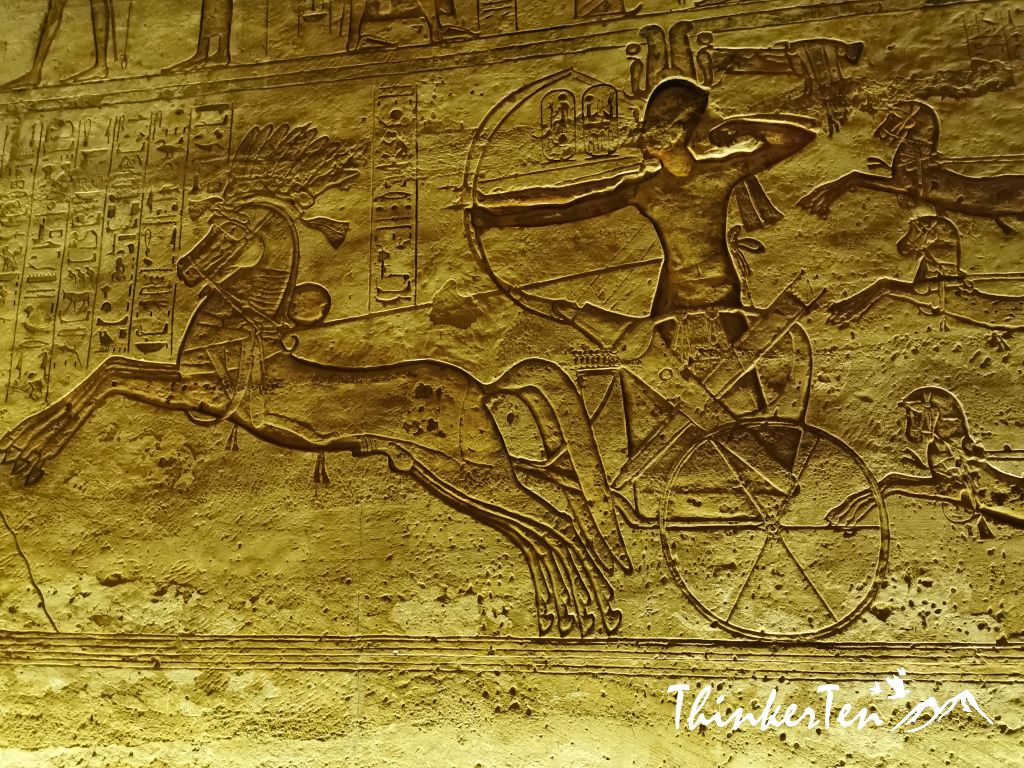 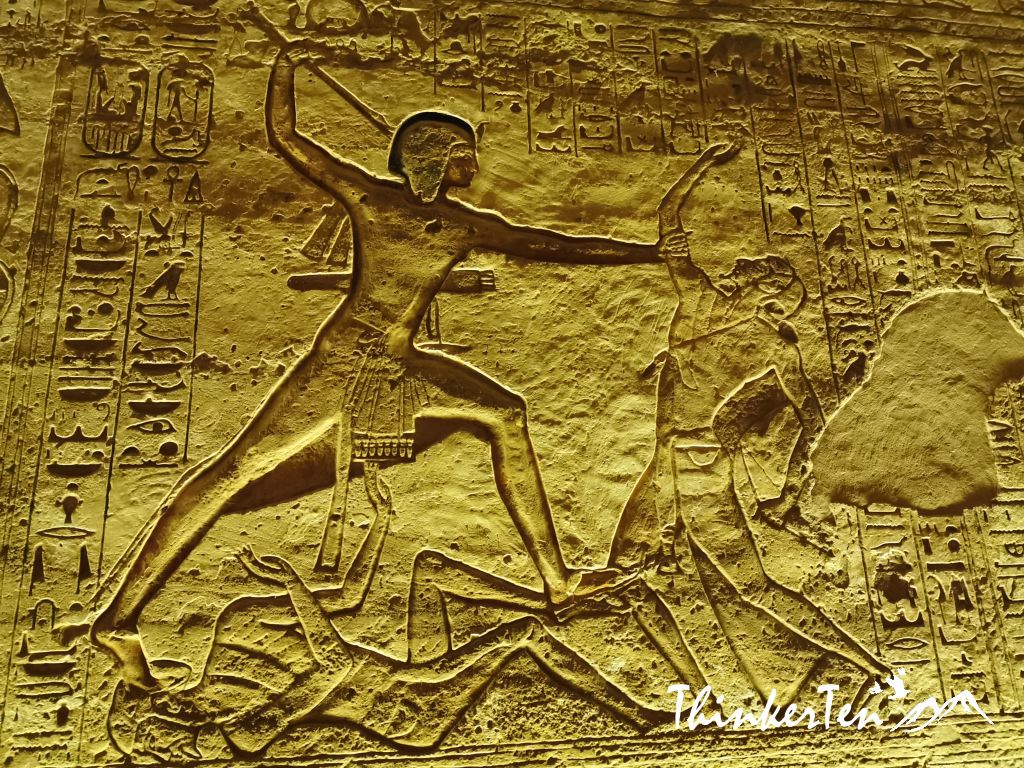 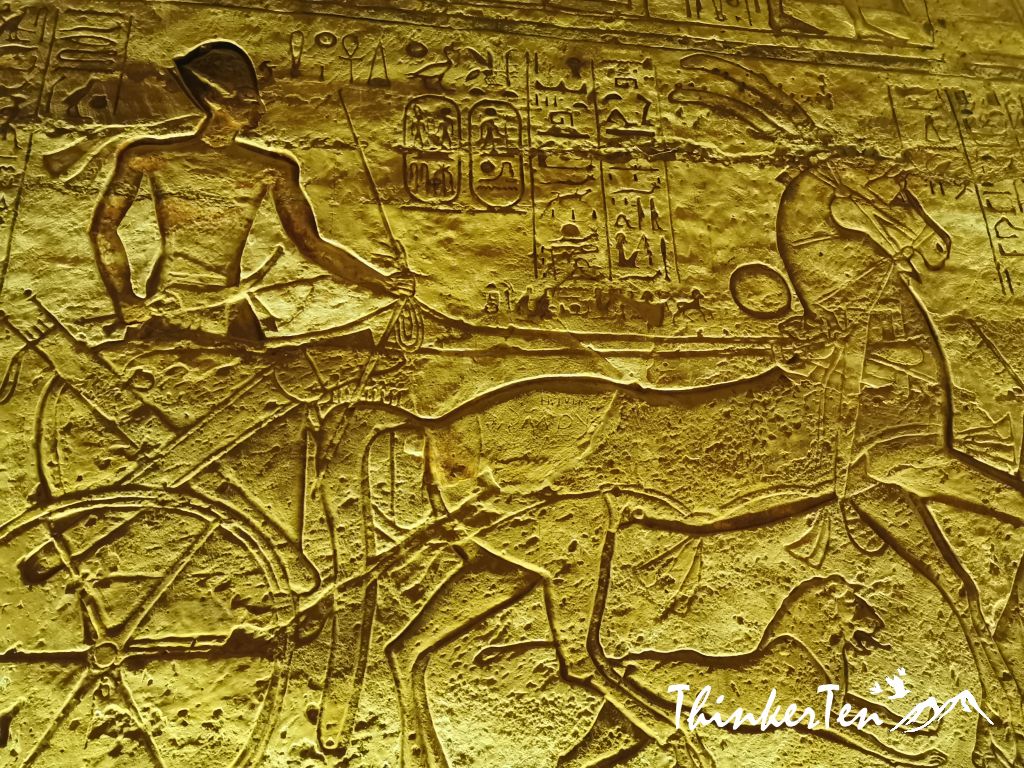 It has been relocated

This is not the original location of the temple of Abu Simbel, it has been moved from another site because of the flood from the river Nile.  It was a multinational effort to save Abu Simbel. With the help of Unesco and international agency, the plan was to move the monuments completely away from the river onto an artificial hill. Inside the hill, a concrete dome would house the interior of the temple. The relocation started in 1964, first, they have to cut the statues and temples into big blocks and then put back together on the new site, just like Lego. It was completed in 1968 and cost USD 40 million to save this piece of treasure. 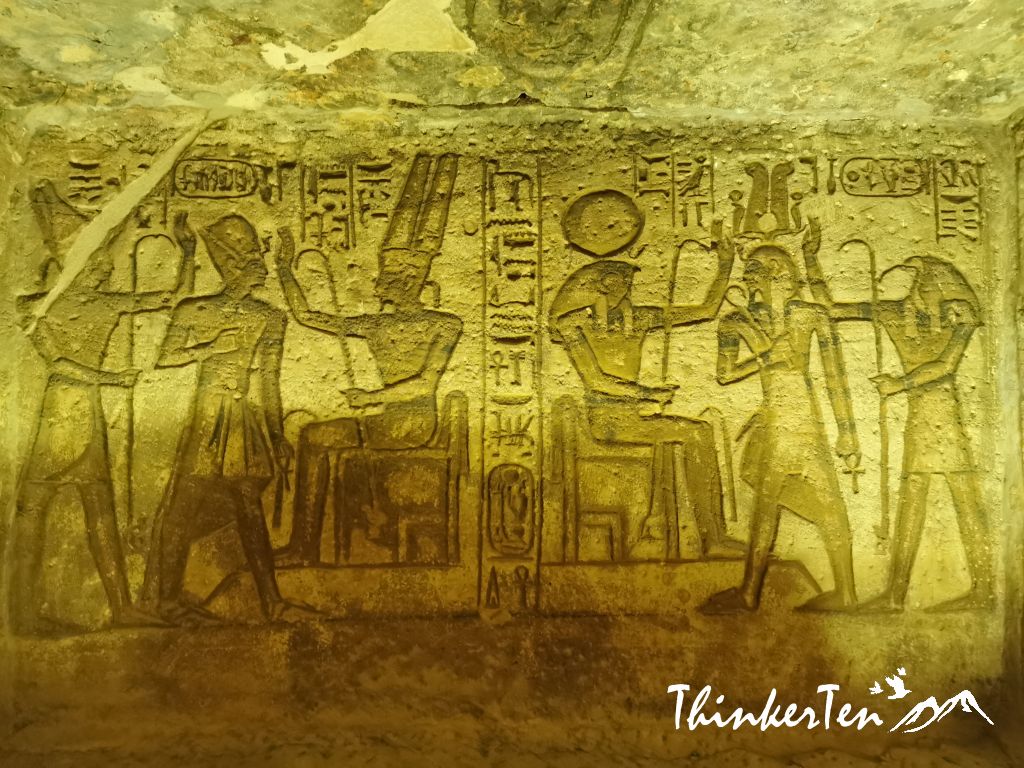 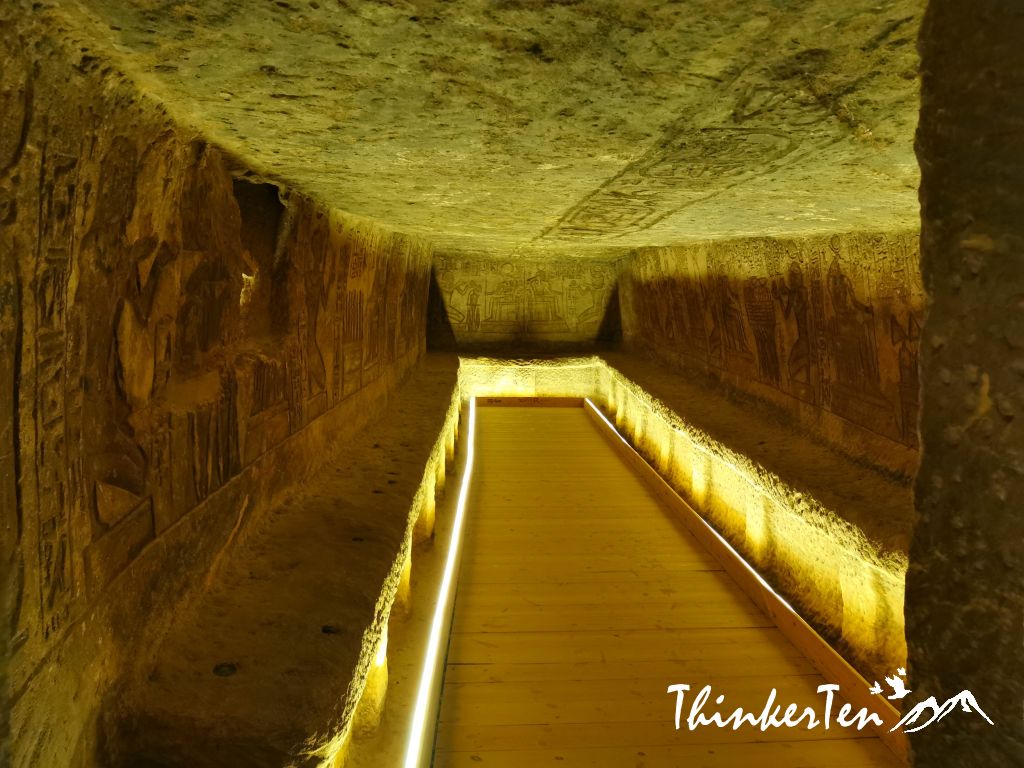 The hieroglyphics depict different stories ranging from the King defeating his enemies to transforming to God. 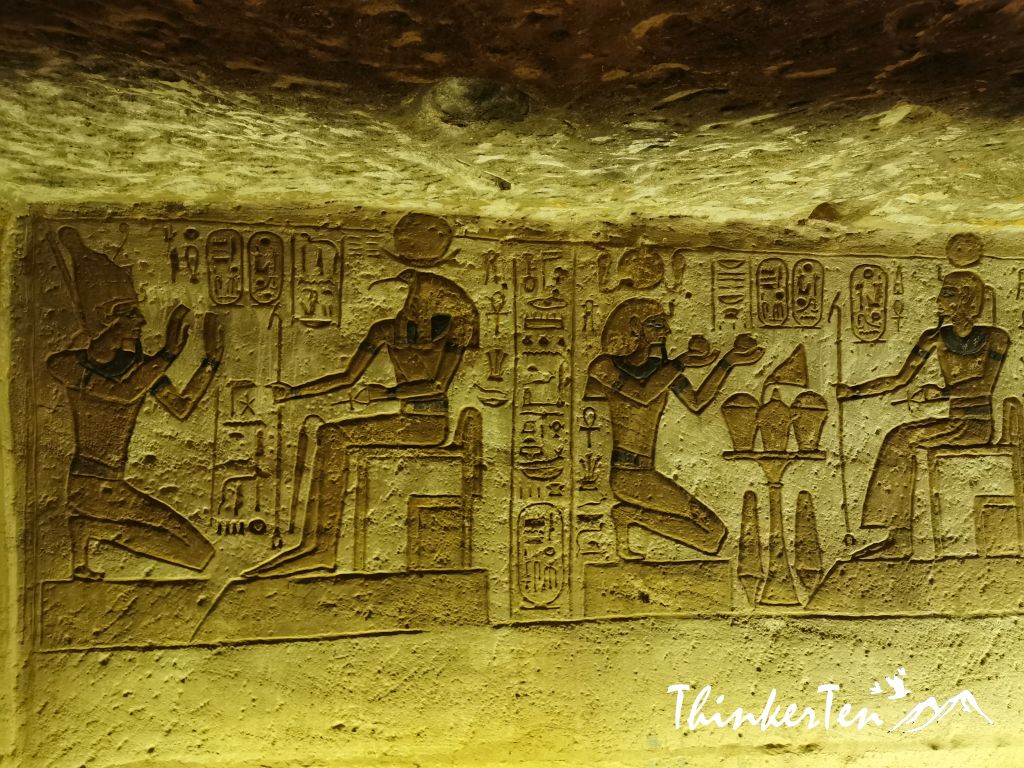 The mural depicts one of the famous battle scene showing Rameses II killing his enemy. 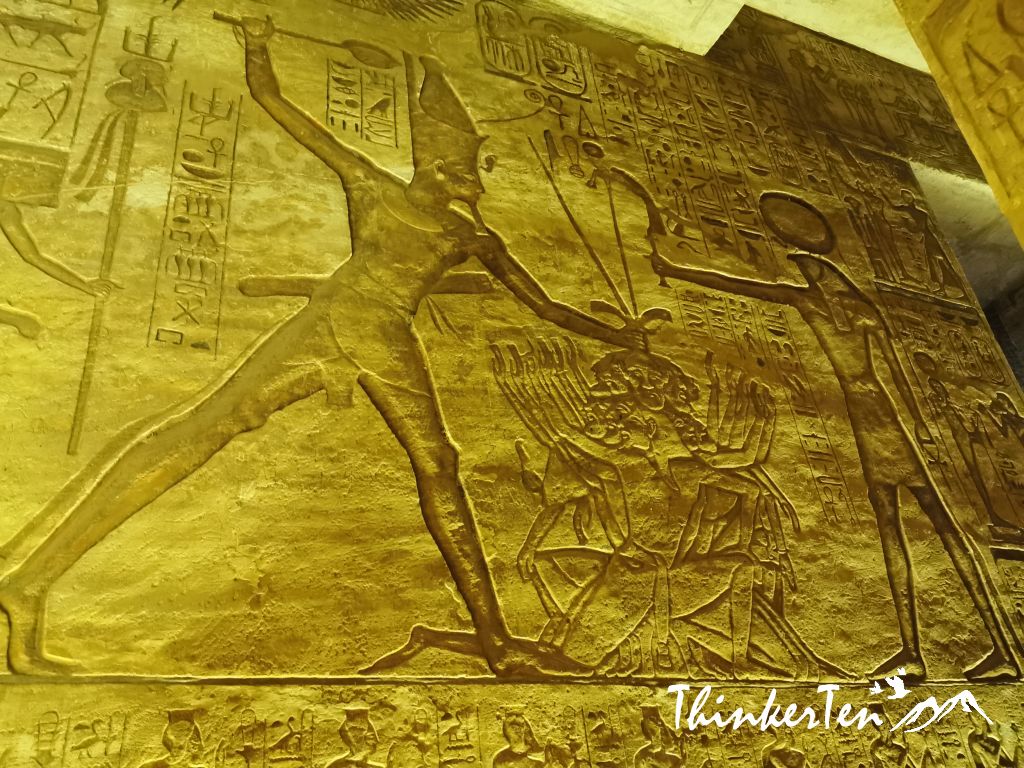 This is an artificial hill. 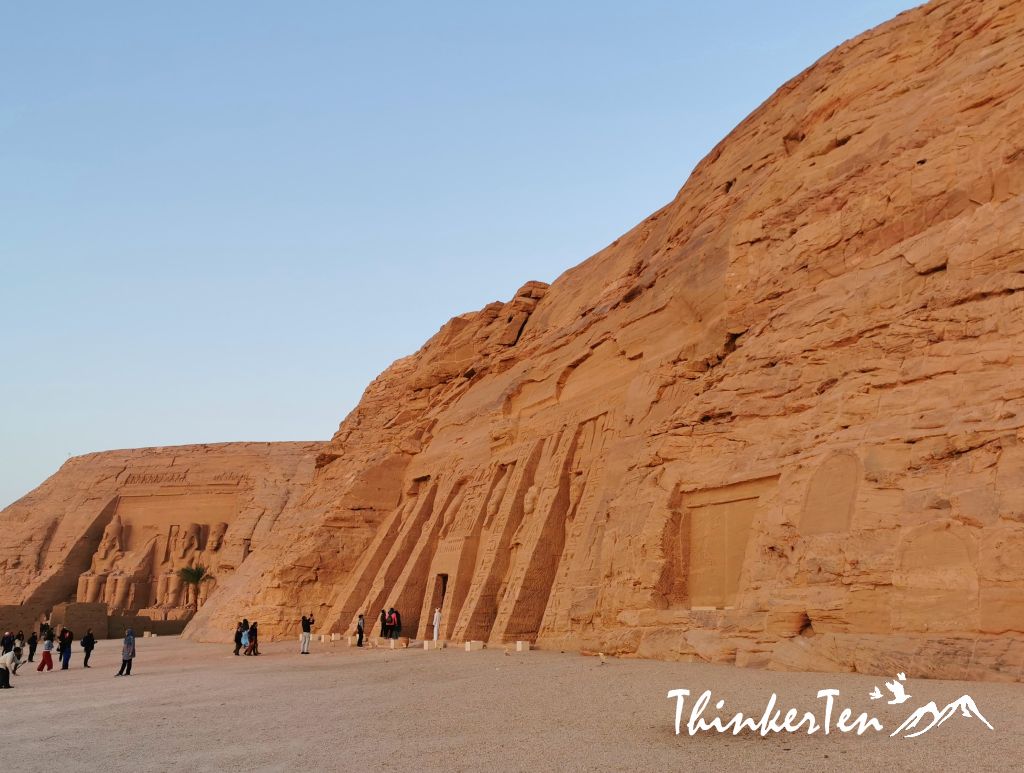 Just about 100 meters away from The Temple of Ramses II, there is a smaller temple that was dedicated to Hathor, goddess of women, love, and fertility. It was also dedicated to Rameses beloved wife, Nefetari.

It is quite unusual to see a big statue at this size dedicated to Queen in Egypt. There are 6 statues that are found at the entrance about 10 meters high. Four of them represent Rameses II and two depict Queen Nefertari.  It is very special to see the statue of the queen is the same size as the pharaoh!  It shows the importance of Queen Nefertari in Rameses II’s heart and how much he treasures and love Queen Nefertari.

There are smaller statues next to these big statue of Rameses II and Queen Nefertari, which represent their children but only as high as knee level.

At the age of 13, Nefertari married the 15 years old Ramses II.  She was the first queen of Rameses II.

Our guide told us that Nefertari is a Nubian girl, a Nubian origin. It could be that she was shown in images with dark skin as a symbol of her fertility and to emphasize her position as the mother of Egypt. 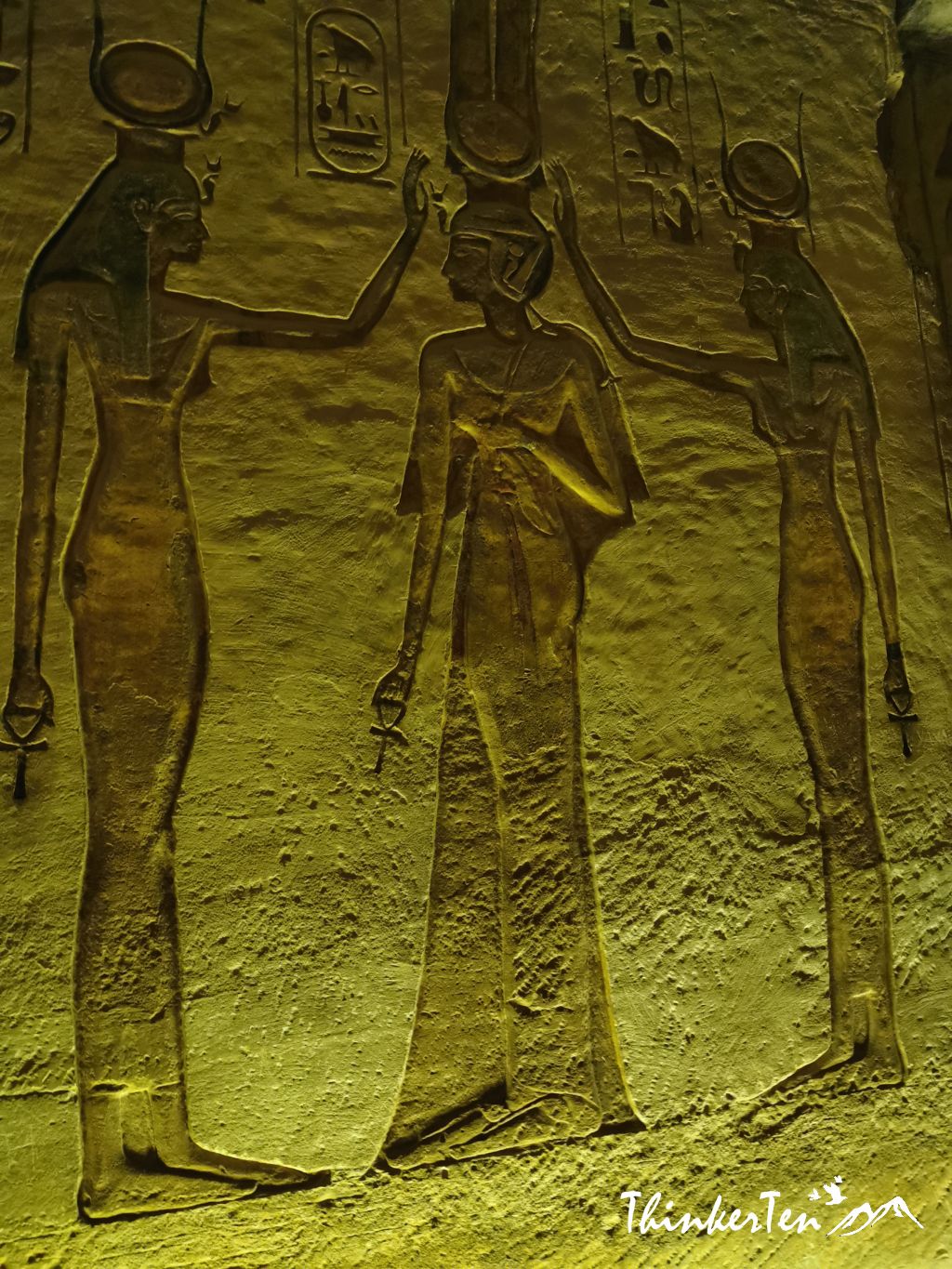 This temple is so much smaller but it still has stunning illustrations on the walls, many that still have color. The below wall depicts Queen Nefertari standing behind Rameses II together offering lotus flower to offer to Hathor Goddess. 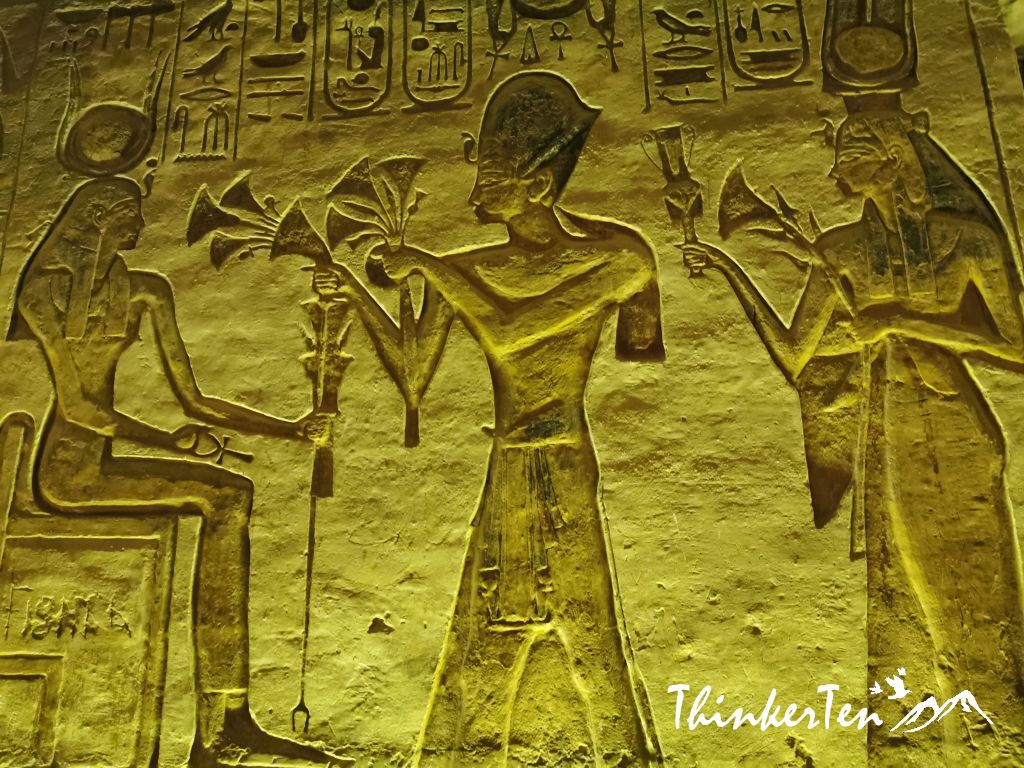 Abu Simbel was named after a young boy who led the Swiss explorer Johann-Ludwig Burckhardt to the site in 1813 as it was lie buried for many centuries. 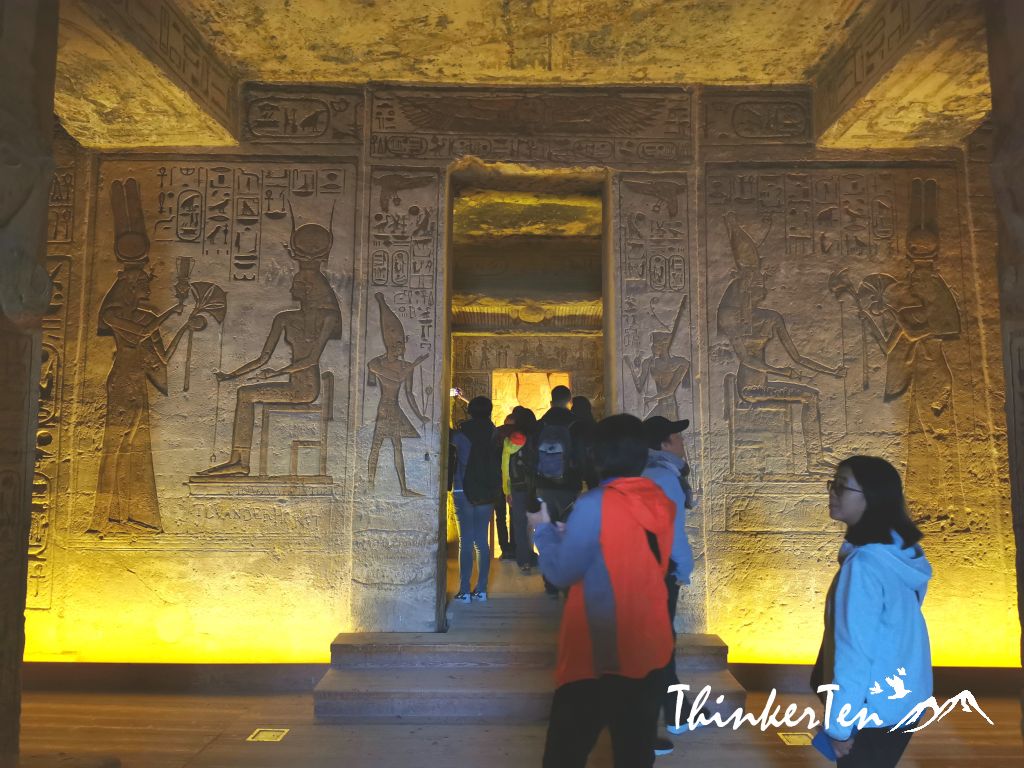 The temple of Abu Simbel looks out over Lake Nasser and tourists can enjoy the early sunrise if arrive early. 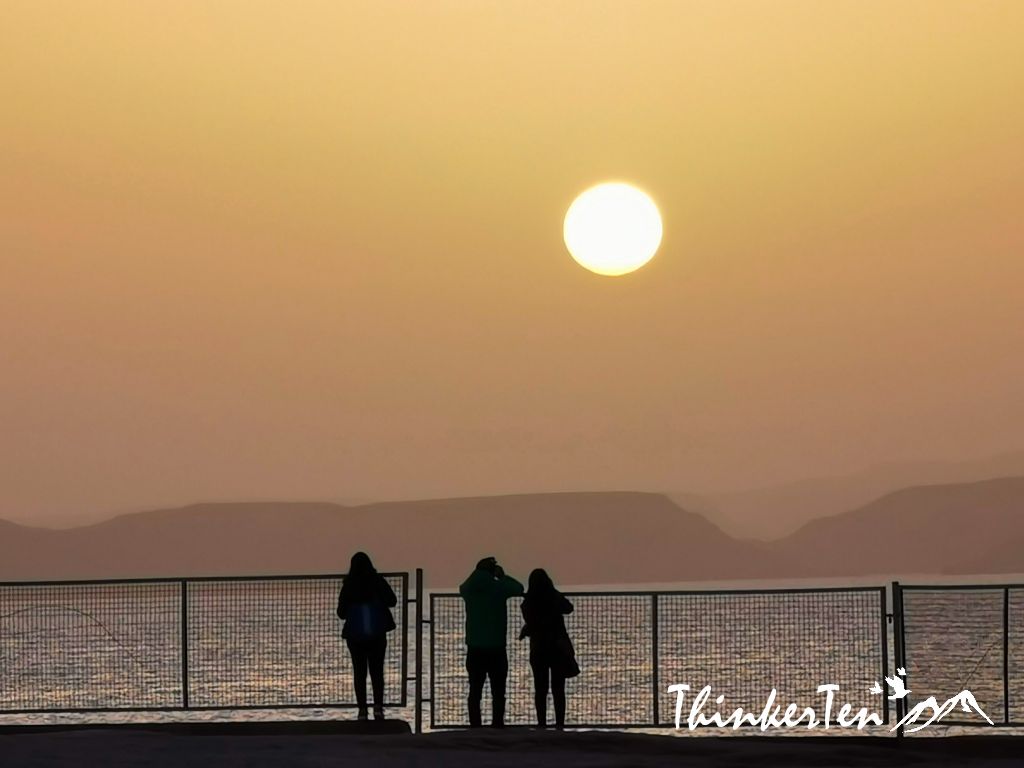 Abu Simbel is the most visited ancient site in Egypt after the Pyramids of Giza and even has its own airport to cater to the thousands of tourists who arrive at the site each year. They are flight direct from Cairo. However, most people come from Aswan by tour buses from very early in the morning, as early as 2 am.

1. It was cold as we travel at midnight through the desert, you need a thick jacket as there is a man-made lake in front of the temple which adds up the coldness of this area.

2. There are toilets at the entrance, you need 5.00 EP / USD 0.30. There are a dozen buses arrived before us and all needed to use the bathroom. So I am pretty sure the toilets make the best business in Egypt.

3. There are men in traditional long clothing holding the ancient Egyptian hieroglyphic symbol, the ankh walking around in the temple waiting for tourists to shoot pictures of them. If you have taken pictures of them, you need to pay tips.  Please note.

4.  Always have small notes with you for toilet access snd tips.

The more I read your blog posts, the more my desire to leave goes up. I have dreamed of ancient Egypt for a lifetime.

Nice picture and the tips will be helpful for first time travellers. So much history to learn from the temple.

Wow, what a beautiful place! I would love to visit Egypt. It’s definitely at the top of my list. The history that took place there is just hard to believe.

The pyramids and temples of Egypt are breathtaking..the image of the sunrise reminded me of the Mummy. Truly something straight out of movie..I wish I could travel there!

Visiting here is at the top of my list. I love sunrises and I would love to experience them all over the world.

OMG! I would love so much to visit Egypt one day! This temple is simply amazing!

I’ve read so much about Queen Nefertari hence would love to visit her temple. Looks like you had such an adventure travelling to these wonderful temples

Oh wow, this is amazing! I haven’t been to any place like this and would definitely want to experience this myself. I’m very jealous!