The Scam in the Great Pyramids of Giza Egypt

The Pyramids of Giza are the largest and most recognizable pyramids in the world, and we were so excited to be able to visit this bucket list on our second day of arrival in Egypt. We departed pretty early in the morning, first we went to Saqqara, about an hour drive from Cairo to visit the oldest step pyramid, then in the afternoon, we came to Giza. Giza is about 14 km from Cairo, a city of its own but heavily-populated. 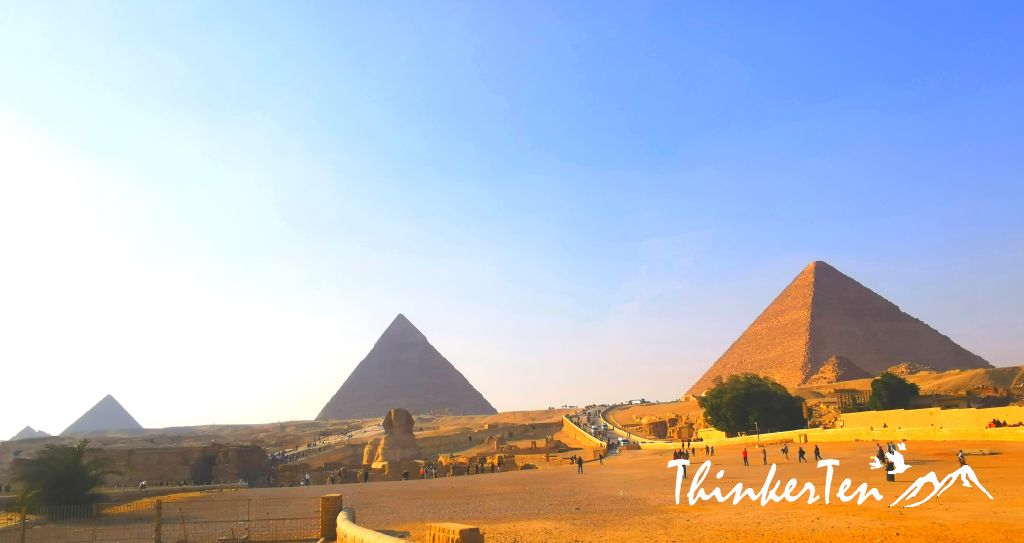 There are about eighty pyramids known today from ancient Egypt and the three largest and best-preserved of these were built at Giza at the beginning of the Old Kingdom. It was built as a tomb for the Egyptian Pharaoh Khufu from the fourth dynasty. 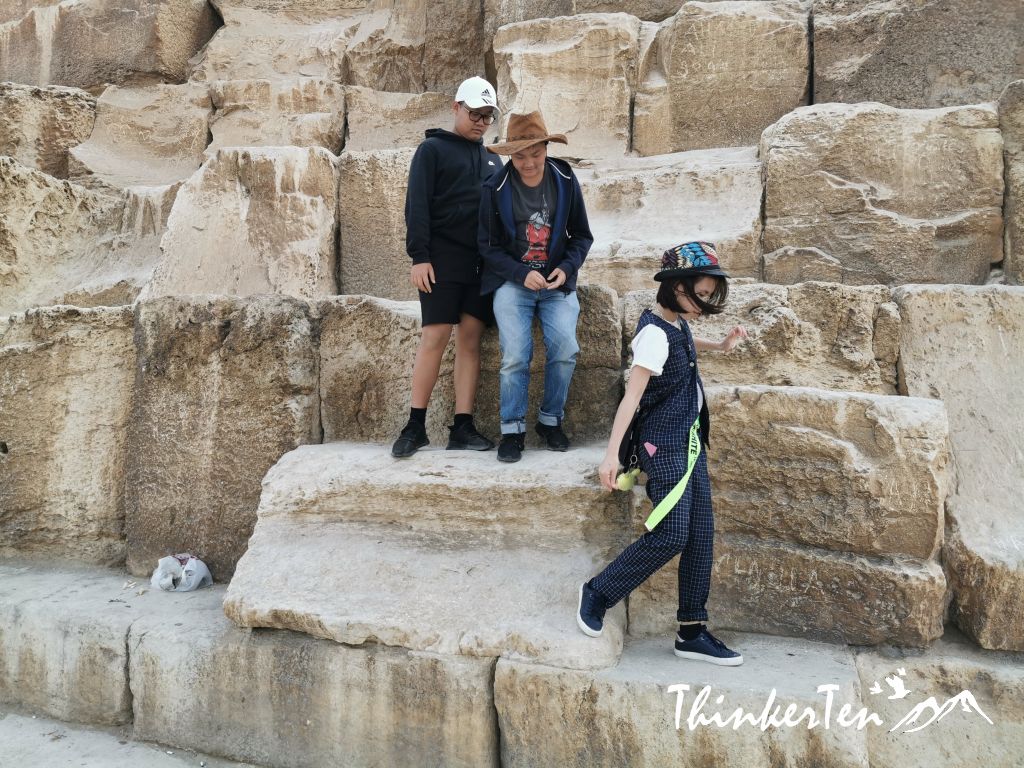 Khufu got famous for building the Great Pyramid at Giza which is also one of the seven wonders of the world. He has a very tiny statue in Cairo Museum and the only surviving one on earth which depicted the Pharoah sits on the throne wearing the red crown of Lower Egypt. I was kind of shocked to see the statue at this size, how could his statue so small and his tomb is so huge? 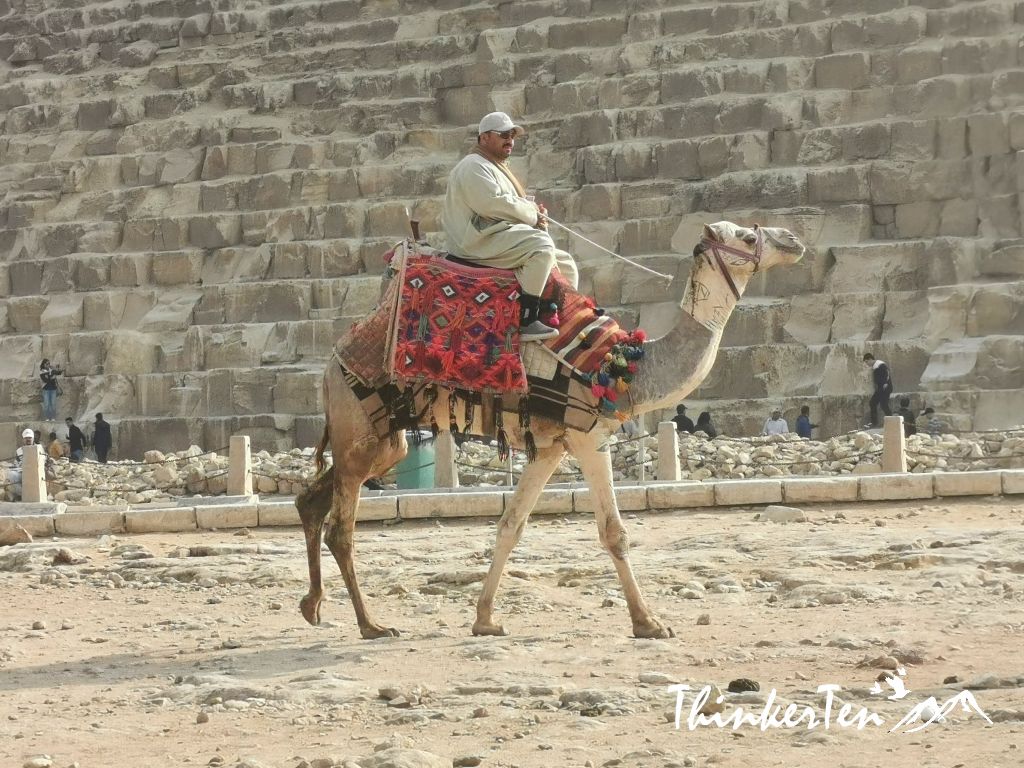 How to take a nice picture of the Great Pyramid of Giza?

A tip for you is not to go too near the pyramid as it is so huge. You will only see big stack of stones pilling up. Go a bit further away from the pyramid so that you could see the shape and take the whole picture.  You may want to wear a bright outfit so that you will stand out from the picture. 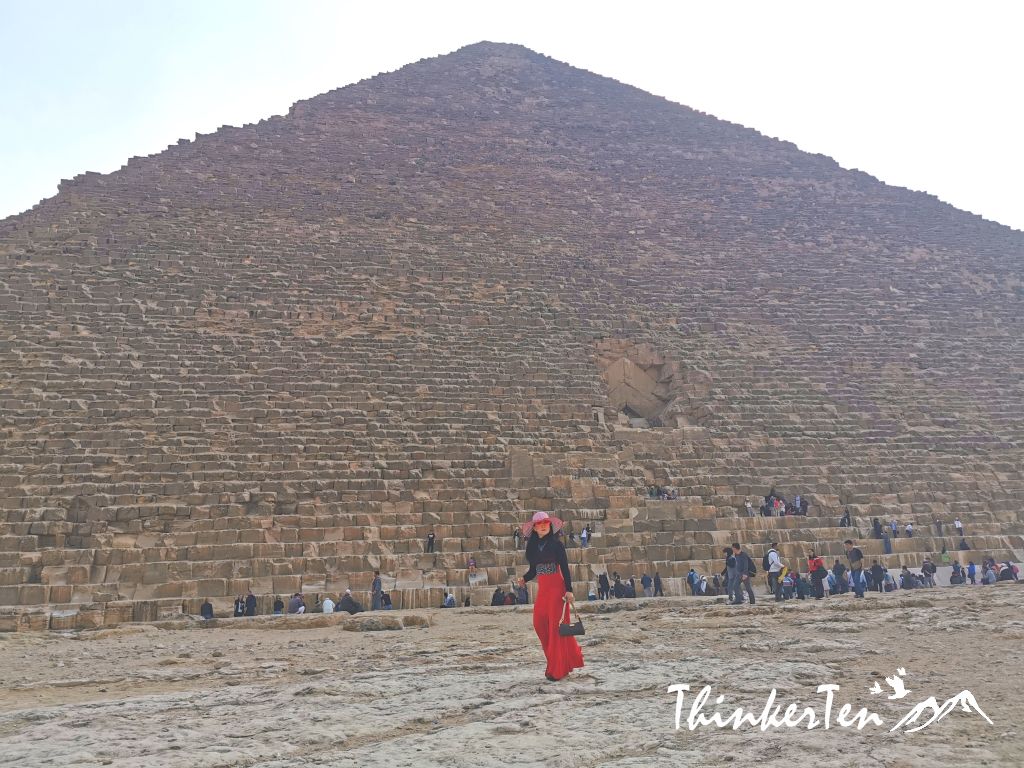 Can you climb up the Pyramid of Giza?

Visitors are not allowed to climb the structure and it is also very dangerous to do so as the stone are very huge. However, there is a small portion for visitors to experience the climb. 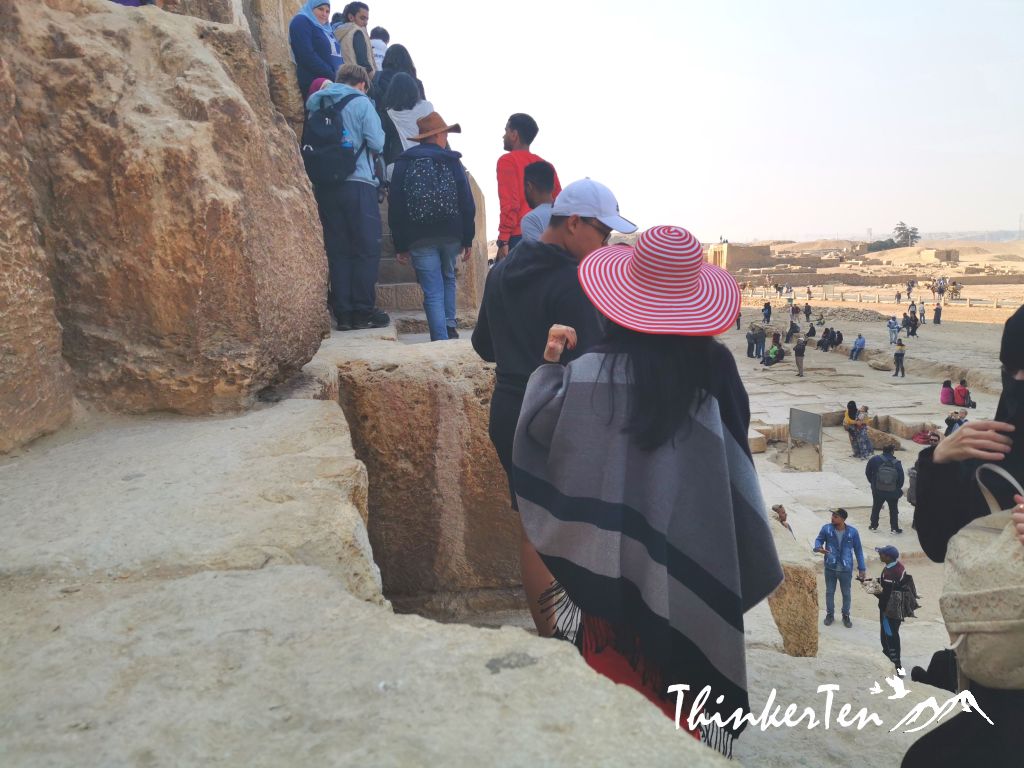 I am pretty sure every tourist would love to experience a camel ride here. Why not? It is the best spot in the world to try out a camel ride, with the perfect backdrop of the desert.

But I have something to share here, please be extra careful with the camel ride in Giza Pyramid. Camels over here in Egypt and the Sahara Deserts are one-humped also known as the Arabian camel or called dromedary. These camels have long legs and very tall. Imagine you have to sit on top of its hump which makes you even higher from the ground. Previously, I had camel ride experience in Xinjiang Silk Road at the Gobi Desert so I thought this one at Giza Pyramid would be the same. Unfortunately, I was wrong, the one at Gobi Desert was two humps camels and they are shorter, tamer and the good thing is you sit between the two humps which means the chances of falling down is lower because you are being protected by two humps, one at the front and one at the back. In fact, it feels pretty comfortable and safe when the camel walks on the sand dunes.

My advice to you is if you are not agile and flexible, it is best to think twice whether to do the camel ride, especially when they get up from the ground and lower you down, you really need some balancing in order not to fall down. 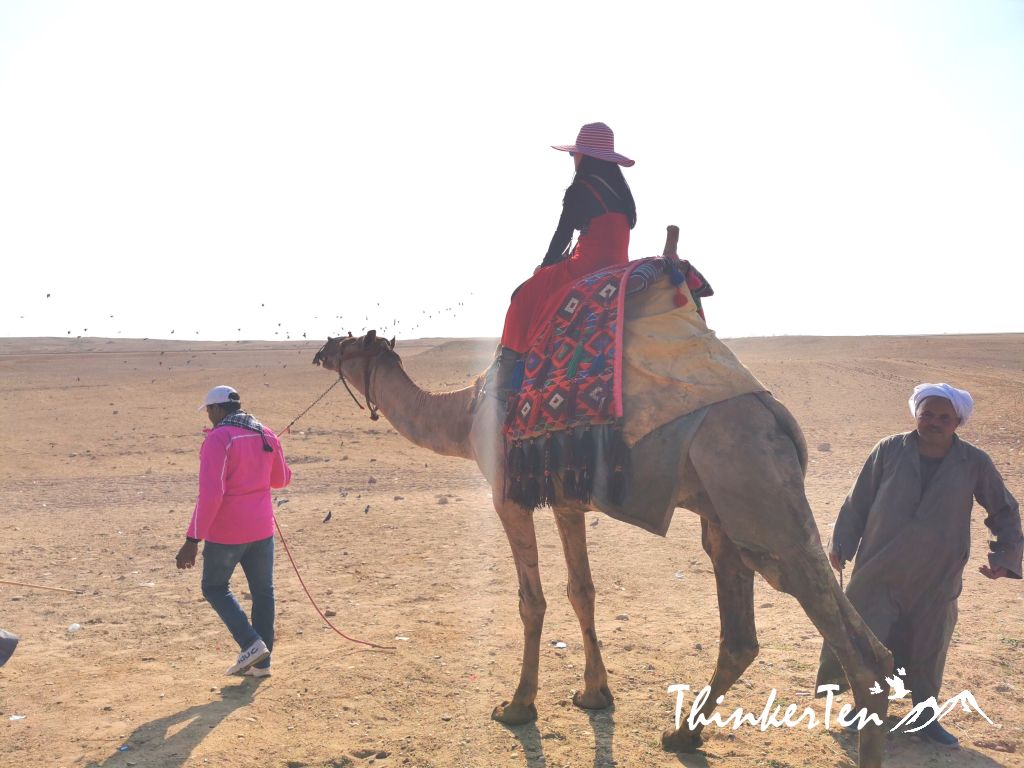 Can you enter the pyramid?

You need to get an additional ticket to enter the pyramid. The walk inside the pyramid is not easy and if you are unfit, you better quit this wishlist. The tunnel inside is very narrow and lack of air.  When you reach the chamber, you will be quite disappointed to find out it is all empty and nothing left as all treasures were looted by the grave robbers many thousand years ago.

Should you still enter? Well, it is really up to you. For some young travelers, why not. Try to experience what it is like inside the pyramid.  There is a limit on the pyramid per day, 300 tickets per pyramid per day. 150 are offered in the morning and the rest are issued in the afternoon.  So you may not be so lucky to get the ticket to enter. 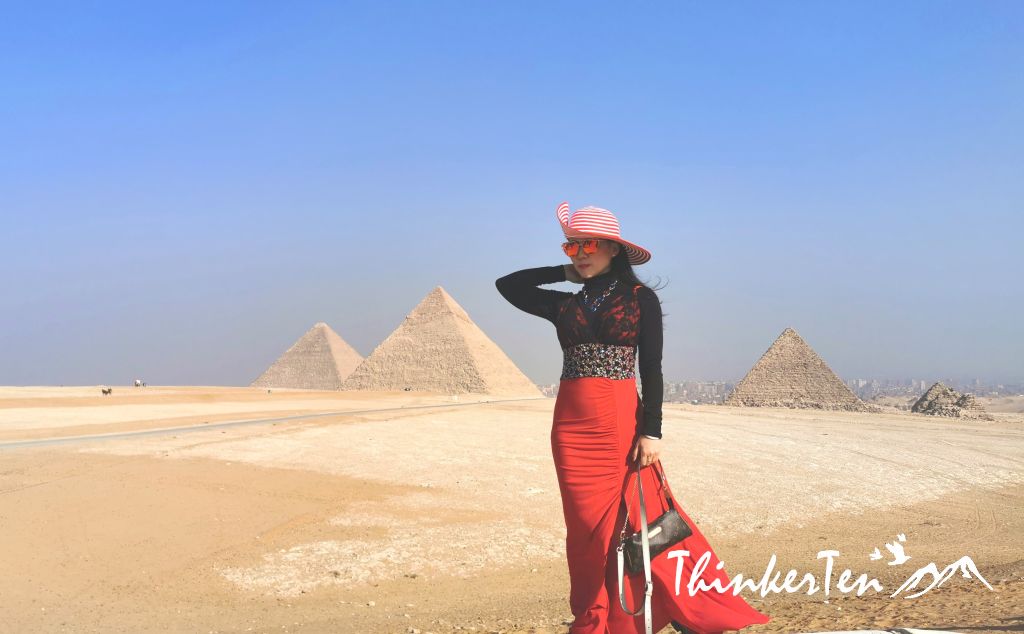 Guess how many stone blocks were used to build the Giza Pyramids?

The big stone blocks used to build the Giza Pyramids came from Aswan and that was about more than 800km away from here.  I wonder how they transported these stones without advance technologies like now.

In total there are 2.5 million stone blocked cut and moved and positioned. 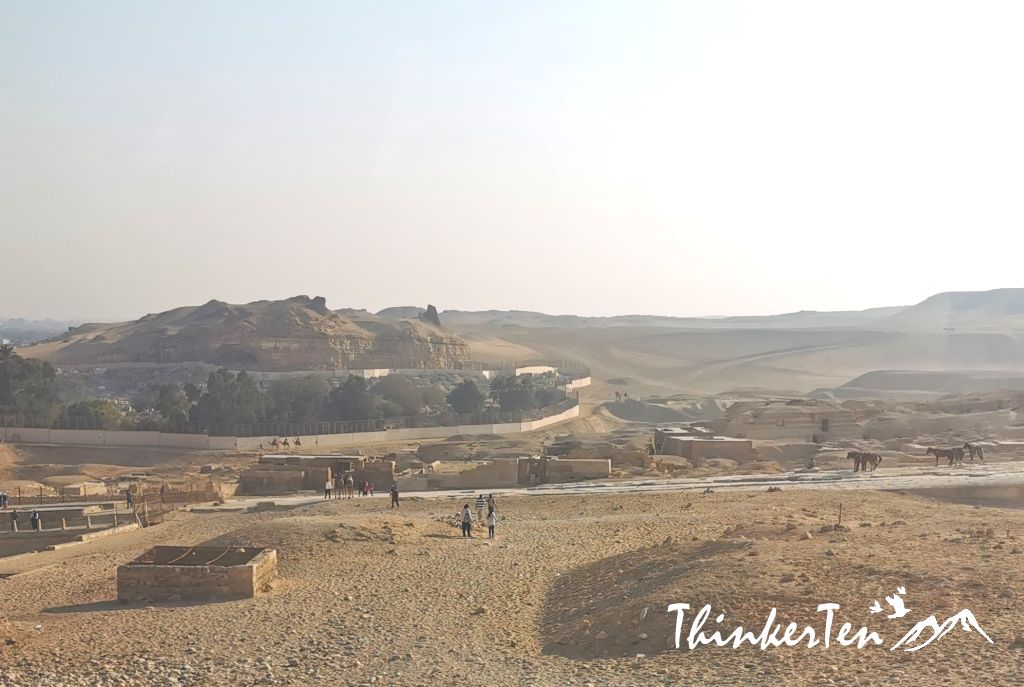 The Sphinx was build from a single rock of limestones, it was built about 4500 years ago. Why built sphinx? It is a mythological creature that has a lion’s body and a human’s head. Some said that the sphinx was built by pharaoh Khafre, the son of Khufu. And the face of the Sphinx resembles Khufu.  The Sphinx was covered by sands a few times and only discovered recently.

These were the seats for the Giza sound and light show which start at night. Some of my group went for the show at night and came back with bad comments. It was not worth the price as they paid for about USD 60 per person including to and fro transport from Cairo to Giza, it took about an hour one way due to heavy traffic jam.  The sound and light system is out of date and the weather was cold as it was in the open-air desert setting.  Well, I think if you are staying in Giza, you can still visit the Sound and Light show as it is just nearby.  If you are staying in Cairo, you may want to think twice as it may not really worth it. Ticket sells at regular at USD 19 and VIP at USD 23. 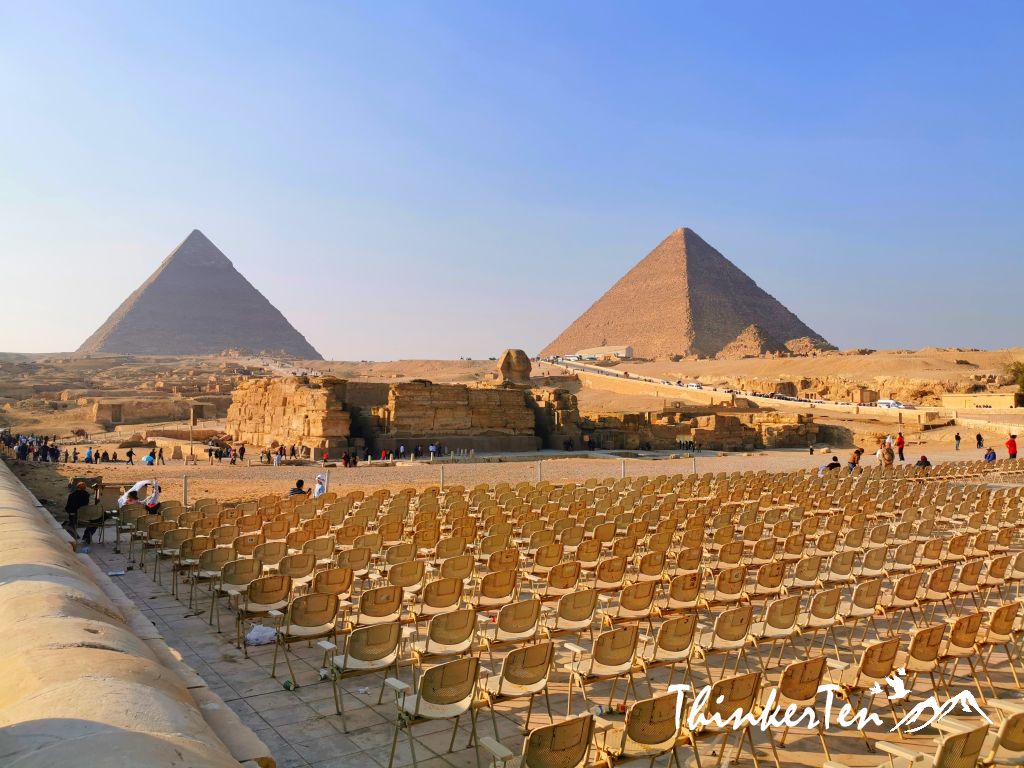 It is pretty amazing to see there are just cities across the roads, not very far from the Pyramids of Giza. 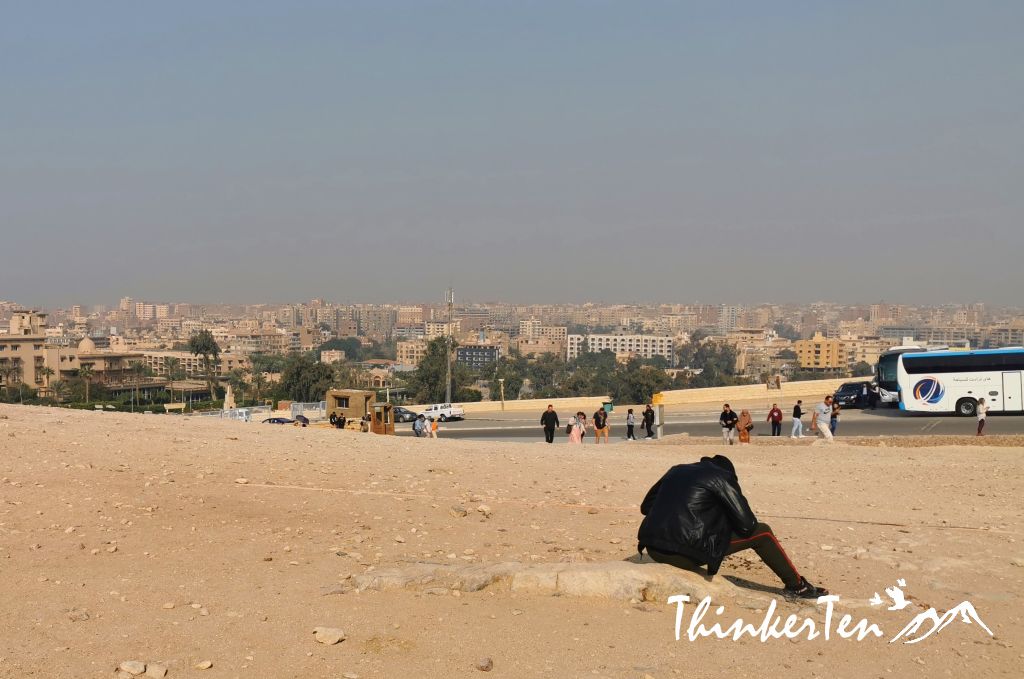 The scam in the Pyramids of Giza can get scary, they do it in the day and in front of the people. It happened to my 15 years old nephew. At first, we were in a group but later a young Egyptian man walked to my nephew and hold his arms and said, “let’s take a picture”.   My nephew was reluctant to let him hold his arm but the Egyptian guy did not let go. My poor nephew did not know how to get away from this scammer and let him took a few pictures together with the scammer’s handphone. The scammer then demanded money from my nephew. At first, my nephew told him he has no money but the scammer then called for his gangs to come over to intimidate my nephew.  My young nephew got scared so he took USD 10.00f from his wallet and pass it to him.  Then only the scammer let loose of my nephew’s arm and let him walk away.

I reflected on this incident and I have to admit that I was the one to blame too because I was too busy taking photos and forgot that my nephew was left behind and being attacked by the scammer.  Recalling back, I actually saw a guy talking to him but I didn’t go up to them as I thought my nephew could manage.

The moral of the story is always to stay together in the group so that it won’t be so easy for the scammers to perform their scam.

A beautiful trip and wonderful tips for anyone looking to make visit to see the pyramids. I hope your nephew is OK, so sad to think that there are people who take advantage of others

Thank you for sharing your experience with us. It’s such a shame to read about this scam, but I feel more prepared for if I ever visit Egypt. Good tip about the one-humped camel too!

Thank you for sharing your wonderful experience with the great pyramid of Giza. This is one in my bucket list that I wish to come true in the near future.

Oh wow. First of all , than you for sharing your experience with us. I am planning to go there some time this year. I feel I am definitely prepared now.

I want to ride a camel so bad. How wonderful!

This is all so fascinating. I never knew any of this. I hope to one day visit Egypt myself!