There are more than hundred pyramids in Egypt and one of the oldest pyramids is called the Step Pyramid at Saqqara.  This is a very unique pyramid as compared to other smooth-sided pyramids because it was designed in a set of six layers or steps.

How long does it take to reach Saqqara?

Saqqara is a small town located 24km from Cairo, it took about an hour to reach. We departed at 7 am in the morning from our hotel in Cairo to visit Saqqara Step Pyramid, hoping to reach the site before the crowd of tourists arrive. 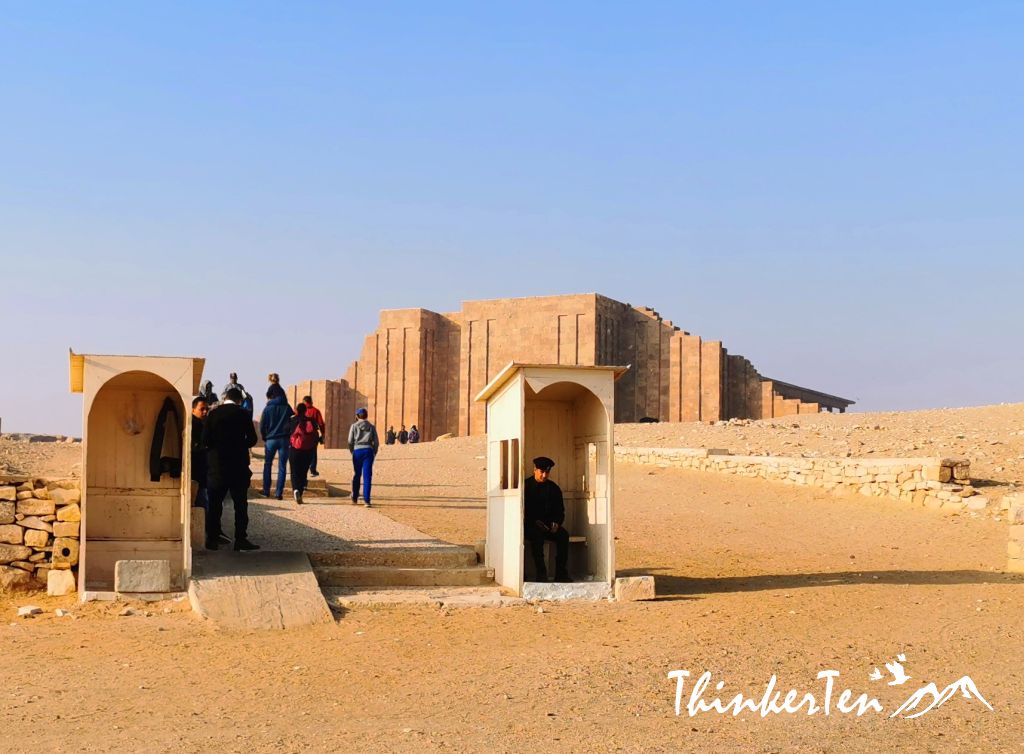 Pyramids are one of the most important monuments of ancient Egypt and fascinate so many people like you and me. Until today, we are still wondering how pyramids were built a few thousands of years ago.

Saqqara step pyramid was the first Egyptian pyramid to be built, about 4700 years ago. It was the first and it was built by stacking mastabas on top of one another, progressively making them smaller. If you do the counting, there are 6 mastabas (layers) and it is 60 m high. 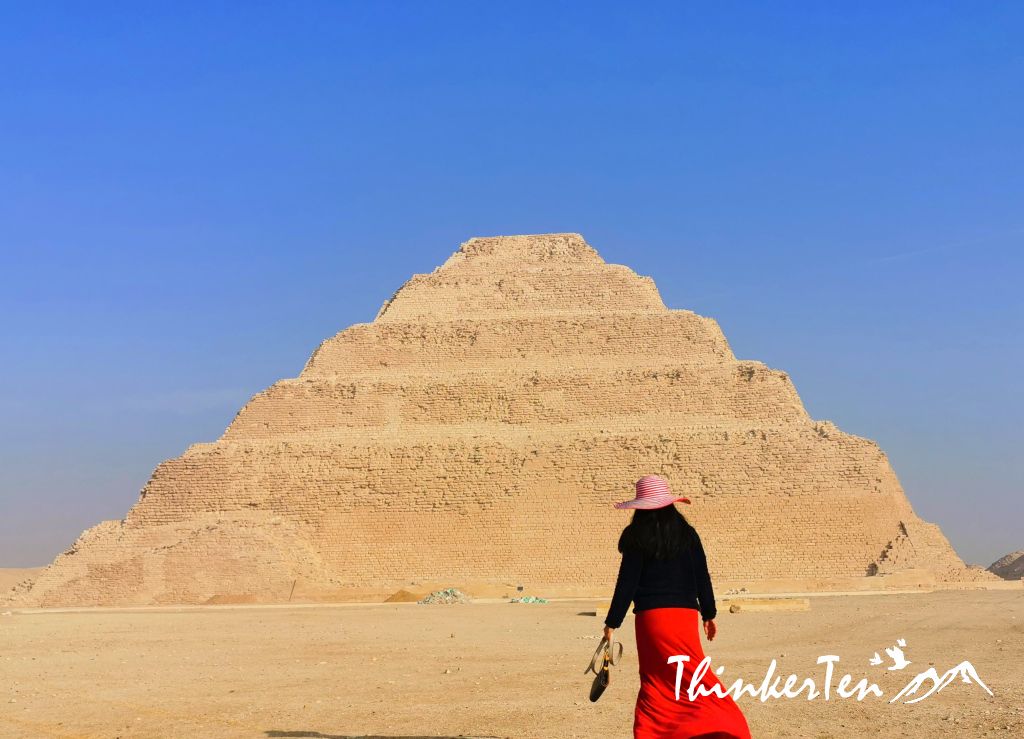 Who built the Step Pyramid of Saqqara?

King Djoser built the step pyramid, he was the second king of the 3rd dynasty of ancient Egypt. His name got famous for building the step pyramid. There is a life-size sculpture of King Djoser placed in the Egyptian Museum in Cairo.

To be more precise, the architect who designed the step pyramid is called Imhotep, he was the architect, priest, physician and chief minister to King Djoser. 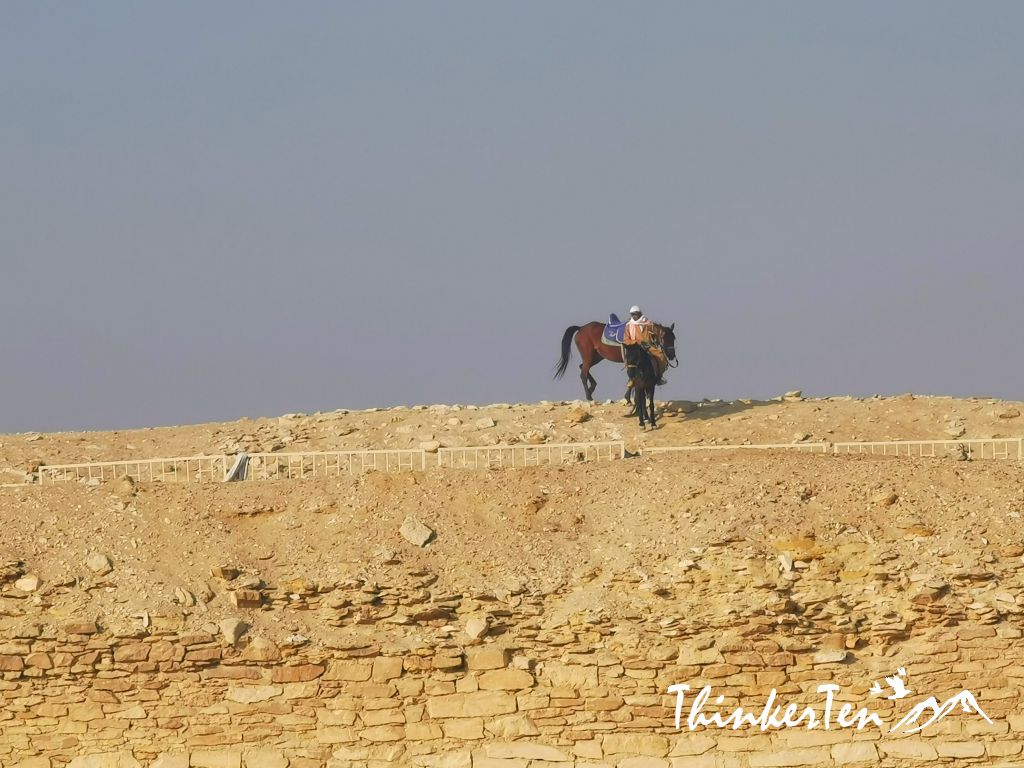 Where is Saqqara, Memphis?

The location for Saqqara was not suitable for settlements. In fact, it is the city for the dead. It was in the west of Memphis.  It was one of the oldest and most important cities in ancient Egypt, it served as the capital of ancient Egypt and an important religious cult center.  The Pharaonic capital is about 7 km from the Nile River.  and it was surrounded by deserts all over. 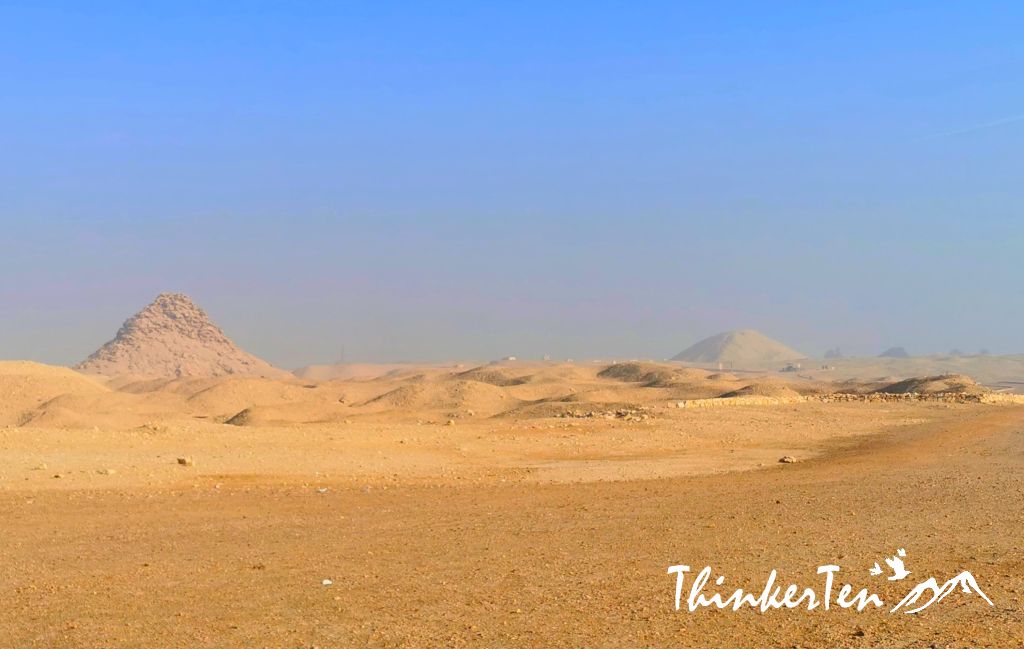 The walk is easy as the grounds are quite flat and mostly covered by sands. You will enter through an entrance building through colonnades and a small hypostyle hall. In total there are 40 columns built to ensure the safety of the ceiling. 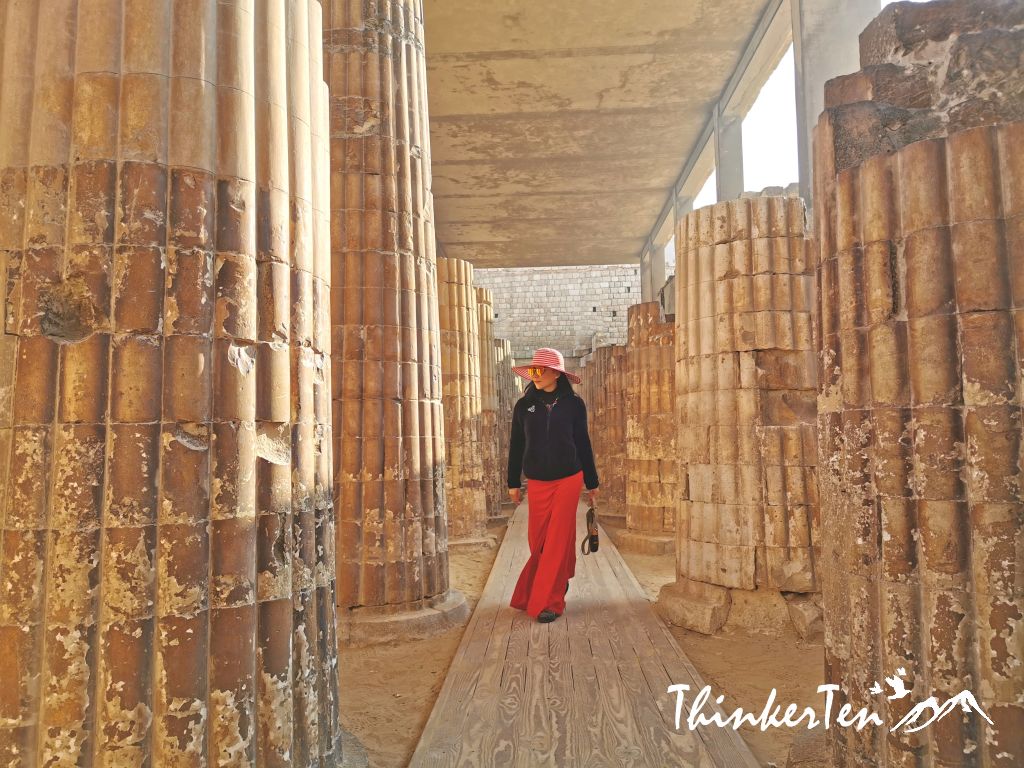 If you are interested in getting souvenirs here, you can and do remember to bargain. 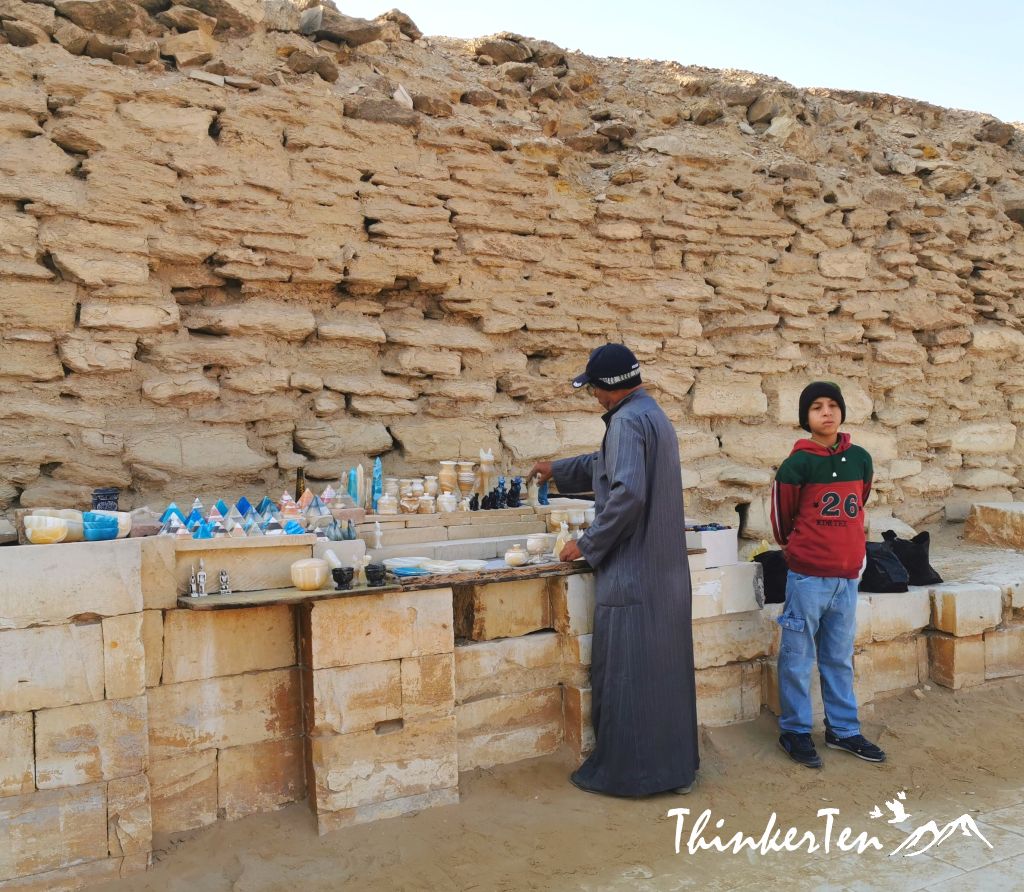 On the way to Saqqara

We passed by villages on the way to Saqqara, looking at the daily life of the people here. Children herding sheep and goats. 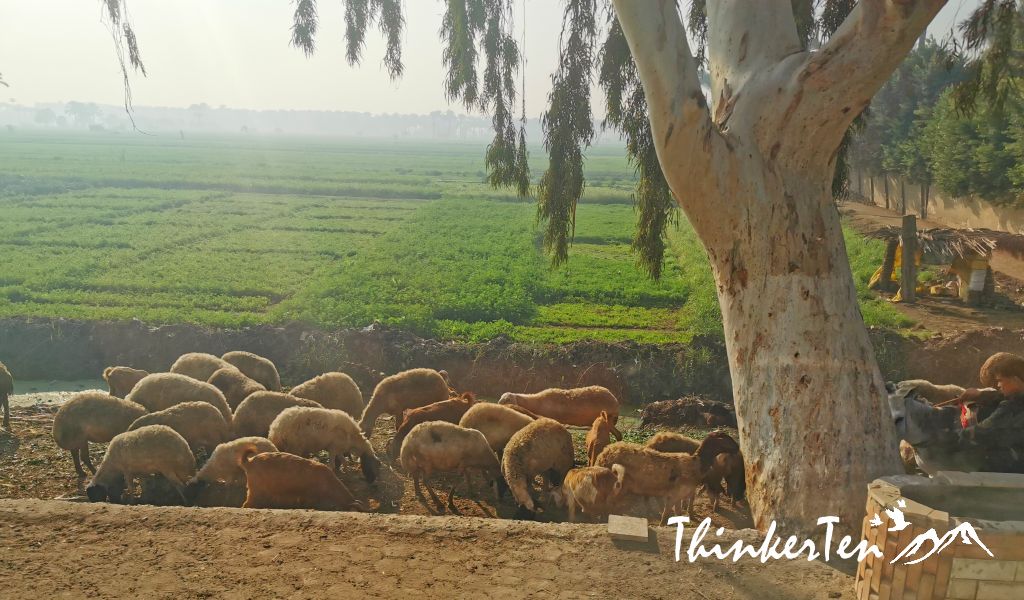 Donkeys are often seen to use to transport people and goods. 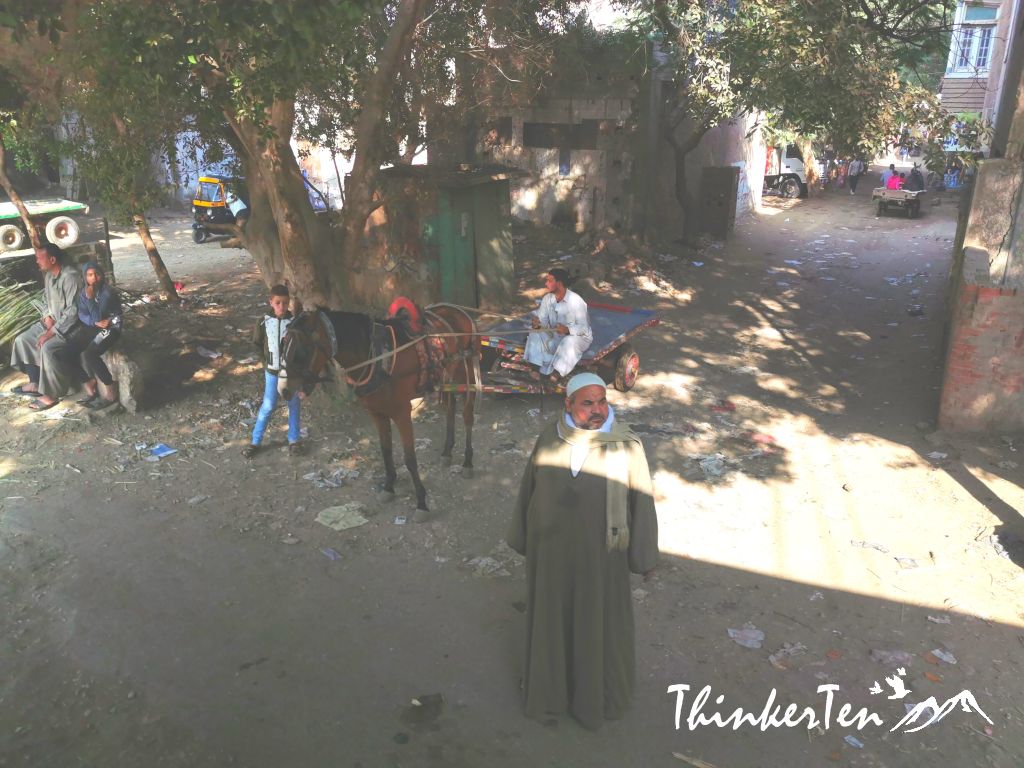 Egyptian flatbread or Aish Baladi were seen displayed at the front of the traditional bread store. 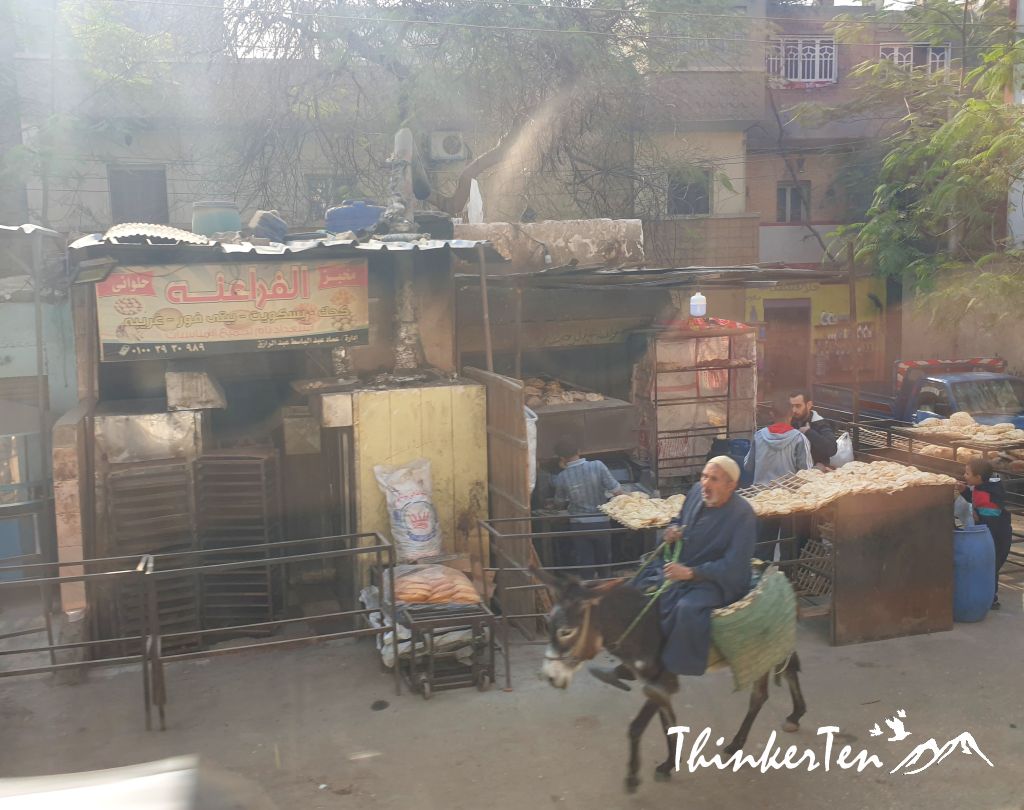 You will notice the unfinished building here. The flat roof serves as cool sleeping quarters as well as storage areas. Sometimes chicken and goats are kept here too. Egyptians also love to stay together even when their children got married. The father will then add a second story to his house so that his children are still staying with him. 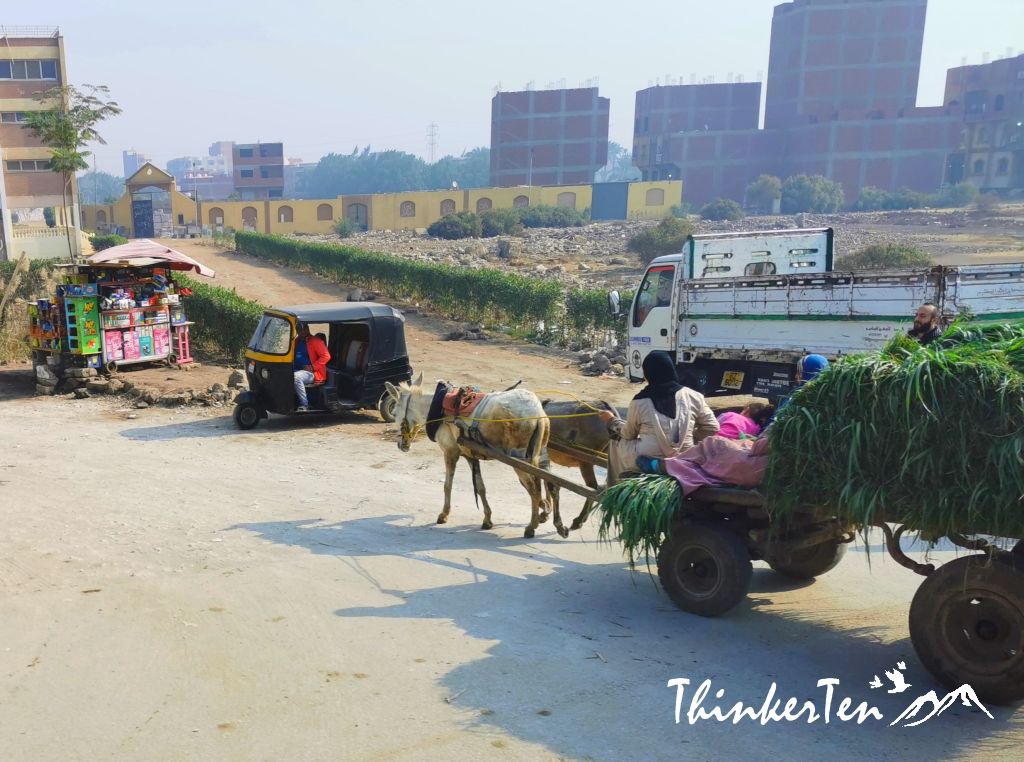 If you love photography, then visit Saqqara early in the morning so that your pictures have no photo bombs from the tourists.  This site is always crowded with tourists so be here as early as possible.  Another tip is to try to choose some bright color clothing to match with the backdrop of sandstones.  Red is a good color to stand out and make your pictures look great.

Man I would so love to visit the oldest Pyramid in the world! The pictures make me feel as if I am there and seriously this is one place in the world that I would love to visit as Egyptian history and history in general has always been fascinating to me. Thank you for this post and adding this to my bucket list of must visit places around the world 🙂

I’d really love to see this for myself one day. Egypt is high on my list of places to visit, and reading your post makes me want to visit even more. I’d visit Saaqara very early to get the best shots!

This is such a dream! I would love to visit at least one of the hundreds of pyramids! Egypt is 100% on my bucket list!

This is so beautiful. I don’t know if I would ever make it to Egypt but this post has made me think about putting it on the list of must do’s

The history in Egypt absolutely fascinates me. I would love to visit the oldest pyramid in the world.

Wow, there is so much history that has taken place in Egypt! I would love to experience it for myself someday. I have always been so intrigued by these kinds of things!

Beautiful pictures. One of my dreams is to visit at least one of the Egypt pyramids. There so much history in that country. And I think pyramids are magnificently beautiful.

Amazing photographs of pyramids panorama. You look equally amazing in bright colors. I have been to Egypt twice. I love this country and its ancient pyramids.

What a spectacular place to visit! I would love to go one day. Great tips about getting photos early

The pyramids are so amazing, I love that we still don’t know a ton about them and it lets your imagination run free thinking about them. I’d love to visit here one day.

My husband really wants to visit, but we haven’t gone yet. It’s def on our list. Great pictures. Thanks for sharing.

Wearing bright coloring is such a great idea. Thanks for the tip!! My husband would look silly in Khaki shorts.