When you are visiting the ancient city of Memphis, you will come to an important archaeological site with a giant sculpture representing Ramasses II.

After visiting the step pyramid of Saqqara, our next destination was the ruins of ancient Memphis which is about 10 mins bus journey from Saqqara. 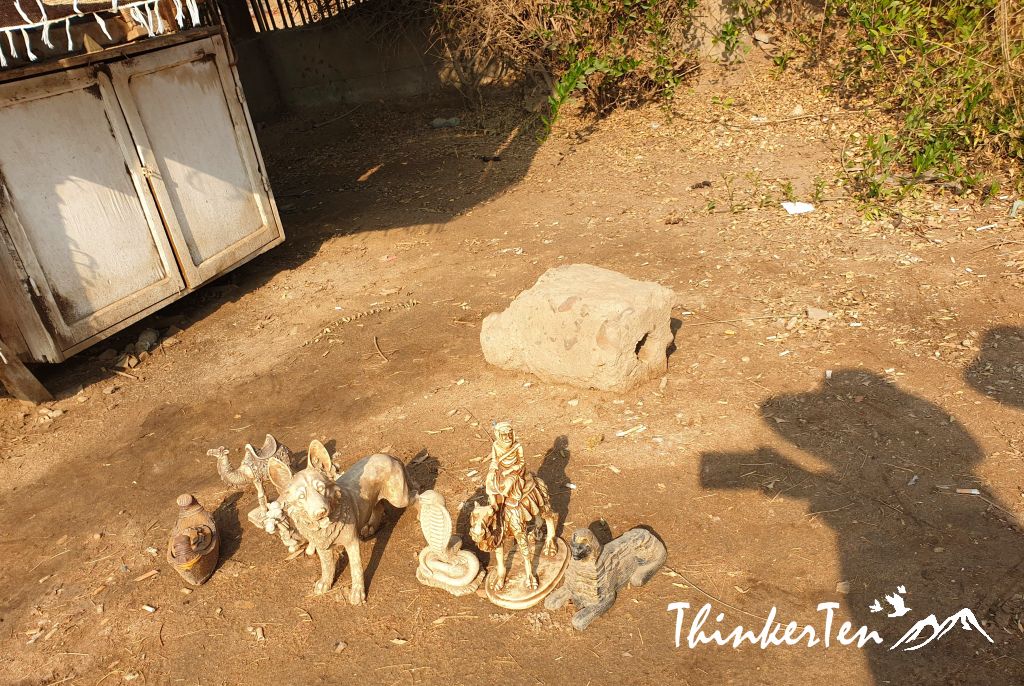 It is an open-air museum with one of the highlight, that is the giant statue of Rameses II, lying on its back. 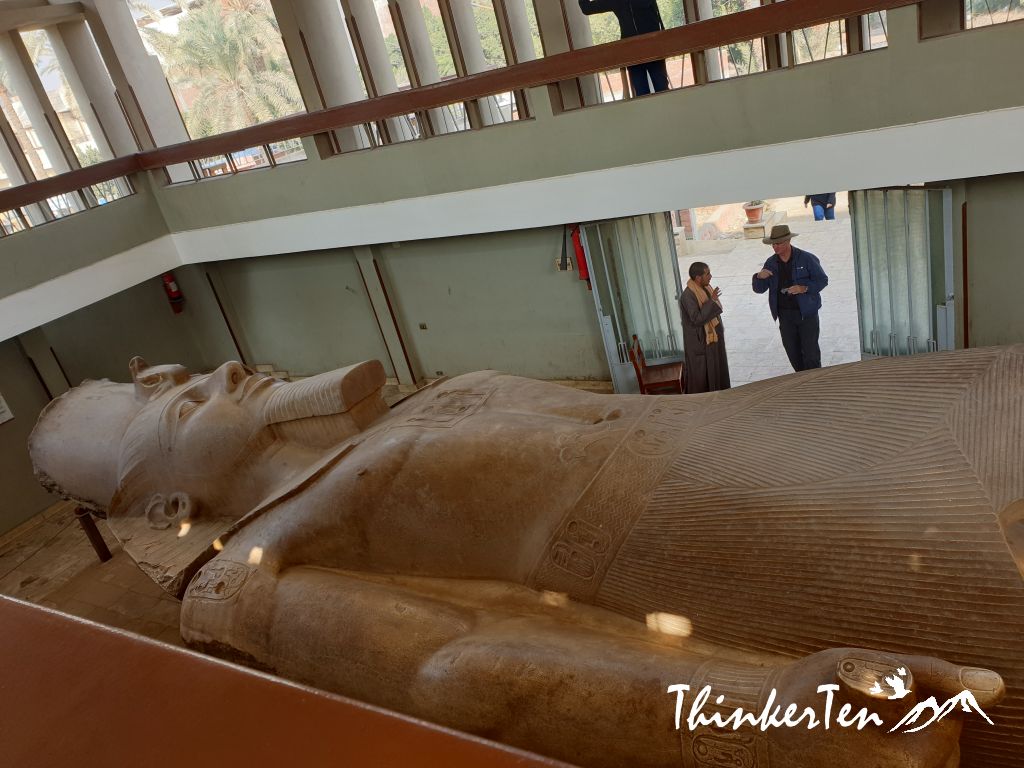 Who is Rameses II?

Rameses II was one of the famous pharaohs in ancient Egypt history. He was often known as the Ramases the Great. He ruled Egypt for 66 years and died at the age of 90 yrs. Imagine 66 years was such a long period of time and one could achieve so many things. Rameses II 66 year reign is considered to be the height of Egypt’s power and glory.

During your visit to Egypt, you will see his statues everywhere. His physical characteristics include a prominent nose set in a rounded face with high cheekbones, wide, arched eyebrows, slightly bulging, almond-shaped eyes, fleshy lips, and a small, square chin. Quite good looking I have to admit. Most of his statues displayed in giant size, tall and forever young. 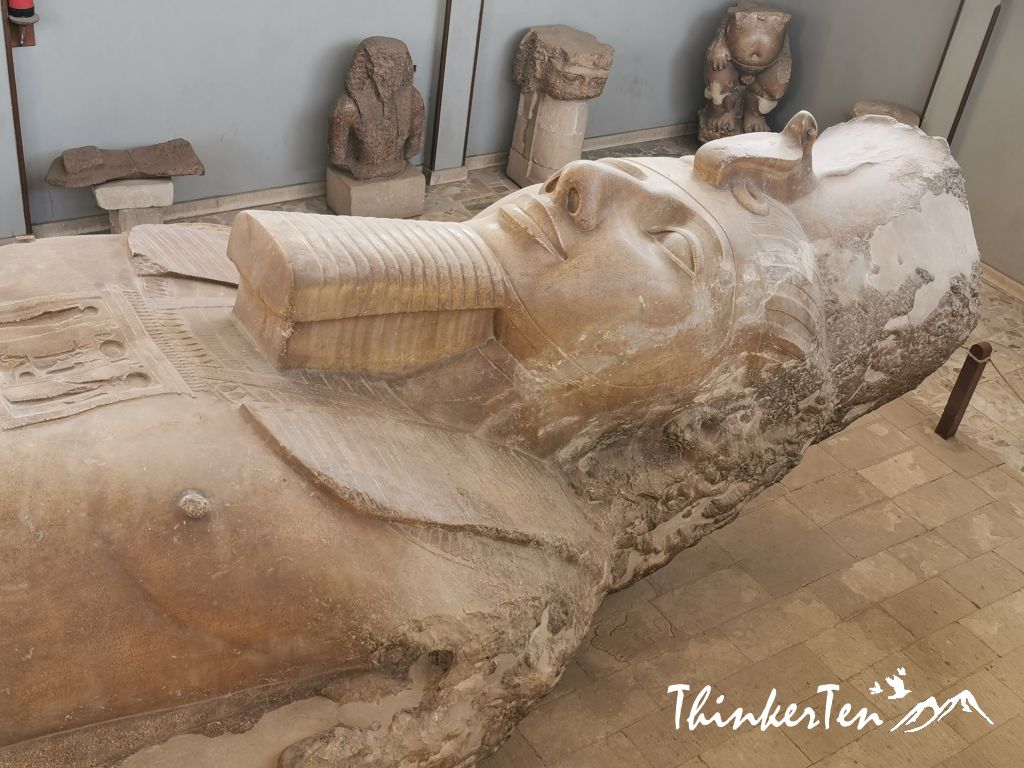 There are other things you may want to learn about Rameses II, the Pharoah has a favorite wife, called Nefertari. Ramases II even built a temple dedicated to Nefertari in Abu Simbel, just next to his. It is common to have many wives for the pharaohs in ancient Egypt. Ramases II also had many wives and over 100 children, about 50 sons and 53 daughters. 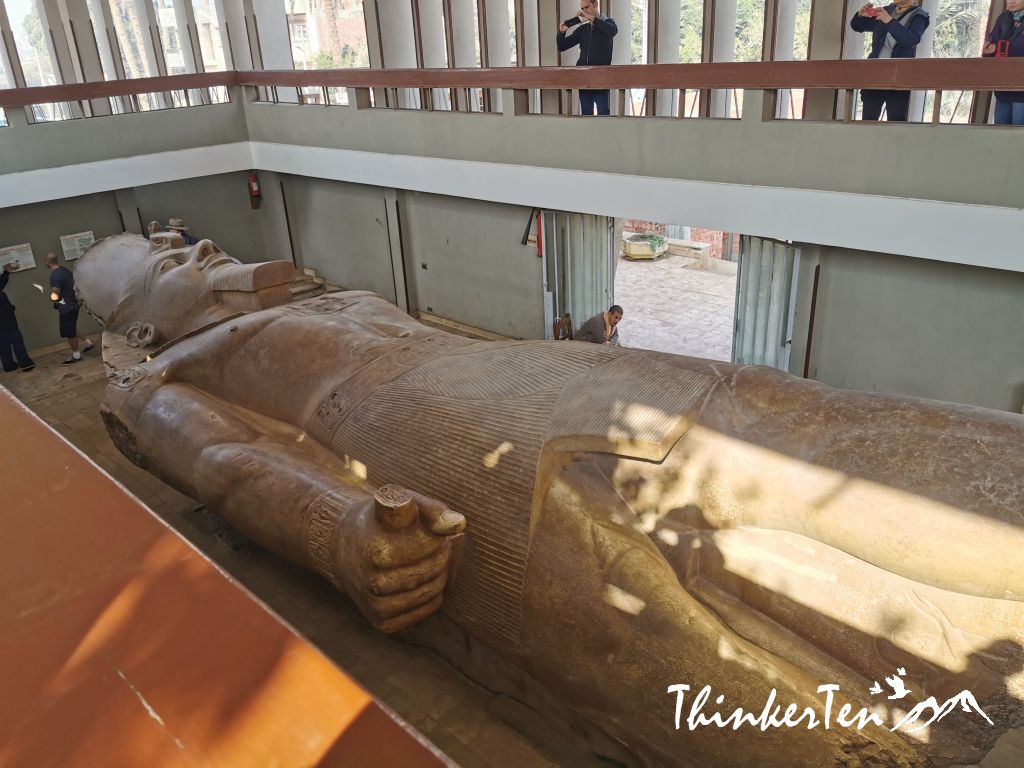 Outside the museum, you will find a stone sphinx in the outdoor complex. The size is not very big but the carving was believed to take place between 1700 and 1400 BC, which was during the 18th dynasty. The good thing is you can walk right up to the stone Sphinx and look at the sphinx, please do not touch it as our hands would wear down the precious statues. We want it to survive for another few thousand years for the next generation. Oh yes, the sphinx was carved from the alabaster stones. Alabaster stones are famous in Egypt, your guide may bring you to one of the Alabaster factories during your tour in Egypt. 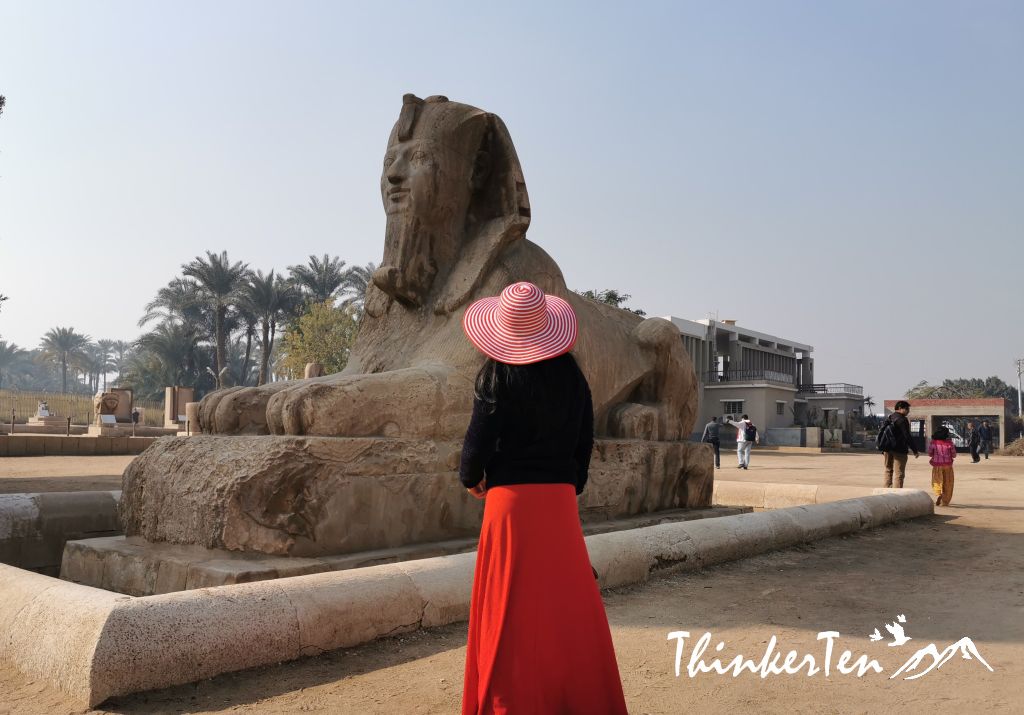 Another statue of Rameses II but this one is located outdoor and it is in the standing position.

You should also pay attention to the placement of the foot for the royal statues in Egypt. Many of the royal statues for Pharaohs have their “left foot forward” stance. We were told from our guide that it means the statue was built when the Pharoah is still alive. But there are other findings so I leave it to you to find out.  Maybe it is just a better regal pose to stand with the left foot forward. 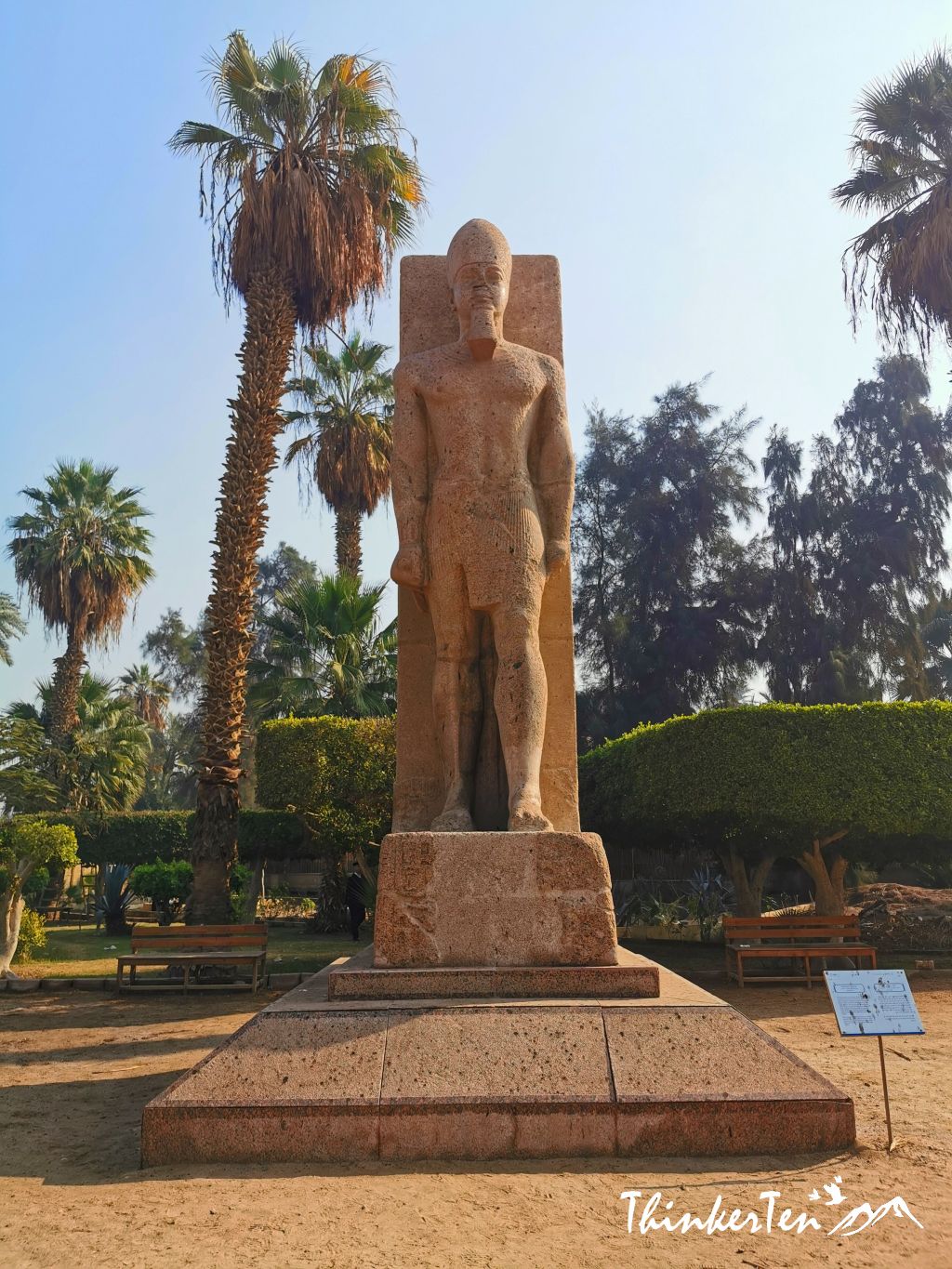 There is nothing much left in Memphis open-air museum here, but it is good to include it if you are visiting the Saqqara step pyramid. Half an hour is enough to cover this area. There are lots of sellers asking you to buy their souvenirs but they do not ask for a very high price. After bargain, I paid 3 USD for 3 miniature pyramids made from stones. I also bought a miniature sphinx and a bast -the ancient Egyptian goddess depicted as a cat, both for 5 USD. 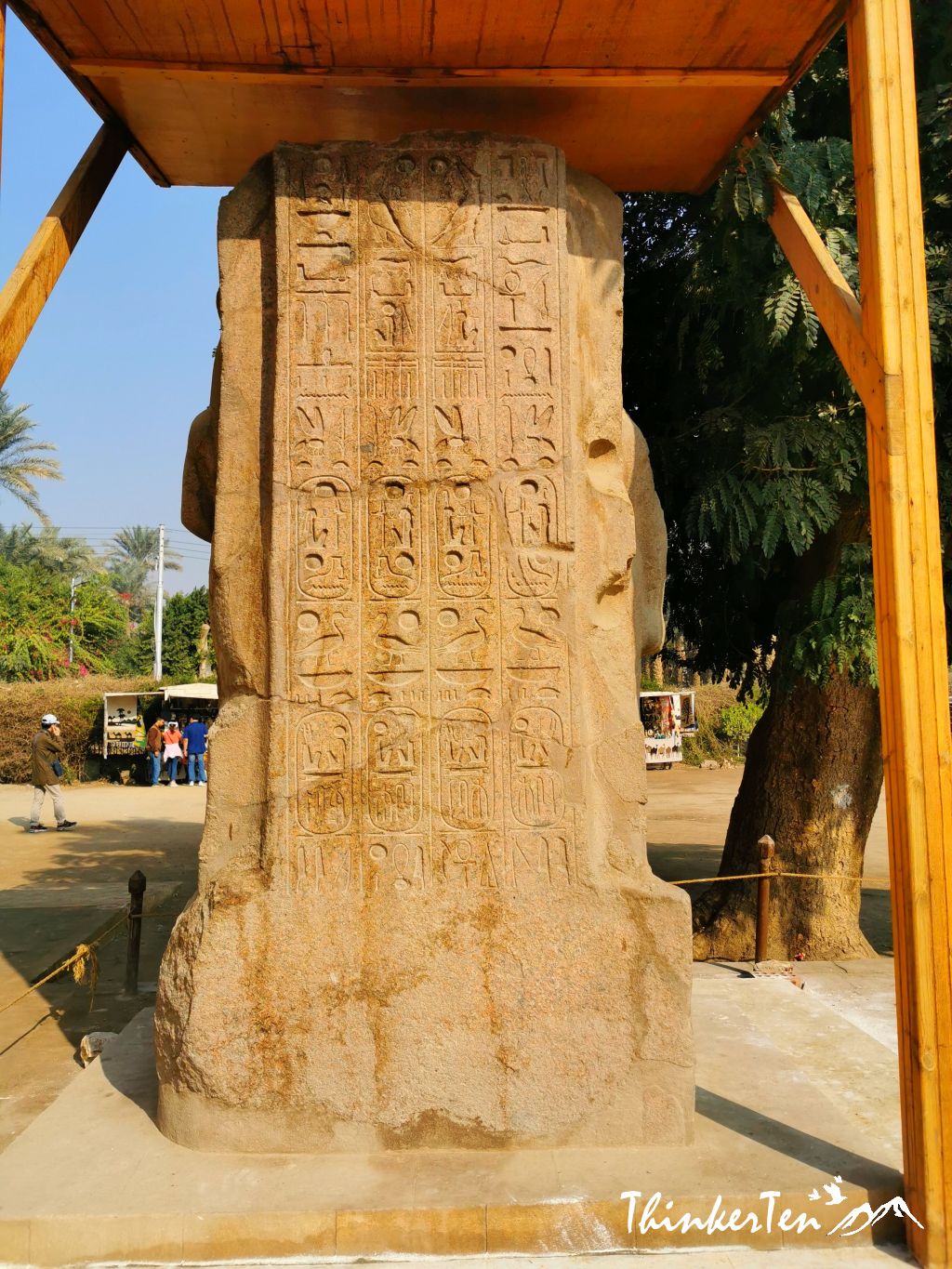 The Carpet School in Saqqara

The carpet school is part of our itinerary. The exterior of the school looks good, considering it was built in the countryside. Neighboring houses are simple and you also see children tending sheep and goats. Most of the villagers here seem to be working as a farmer as you see many crops growing here.

There are several carpet schools in this area and we were told that these schools have actually played a very important role in teaching people the art of rug and carpet making. 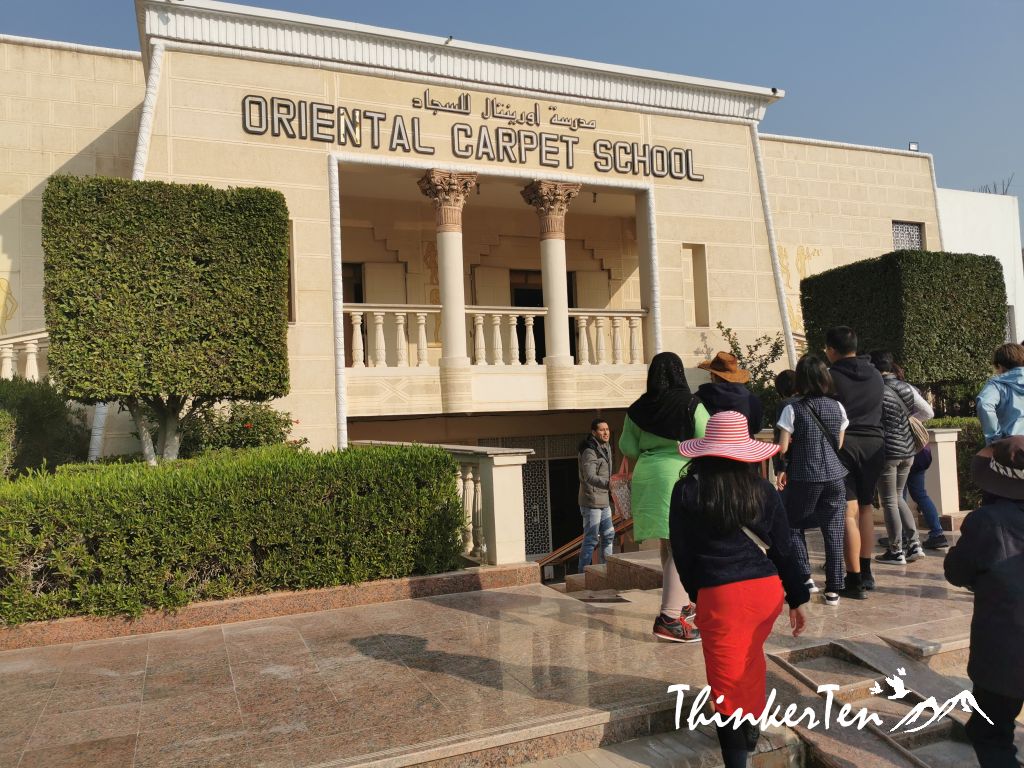 I was somehow shocked to see children in the carpet school, they are easy to demonstrate how they create these beautiful carpets from delicate silk thread. The speed and precision of their fingers as they knot the colorful carpets is hard to believe and mesmerizing to watch. 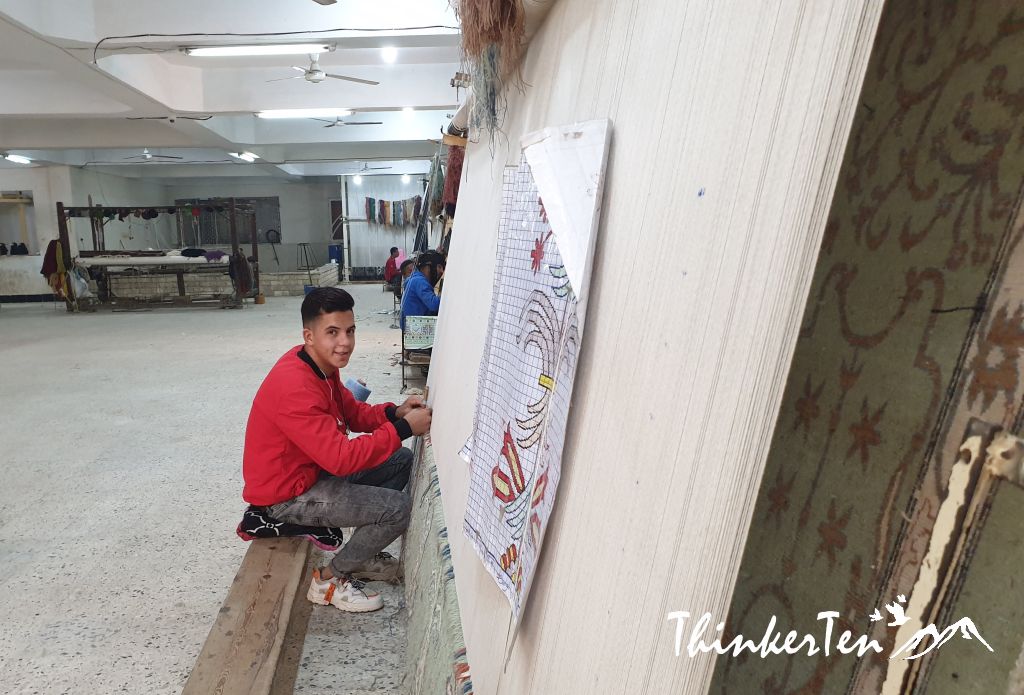 These kids can’t communicate in English so there is no way I could interview them. I have so many questions in mind but it seems that there were guys who work there watching and do not want me to interact with them. They do not want us to spend too much time watching the demonstration and so eager to rush us to the showroom upstairs.  My group was good so they were all rushed upstairs at the showroom except me. 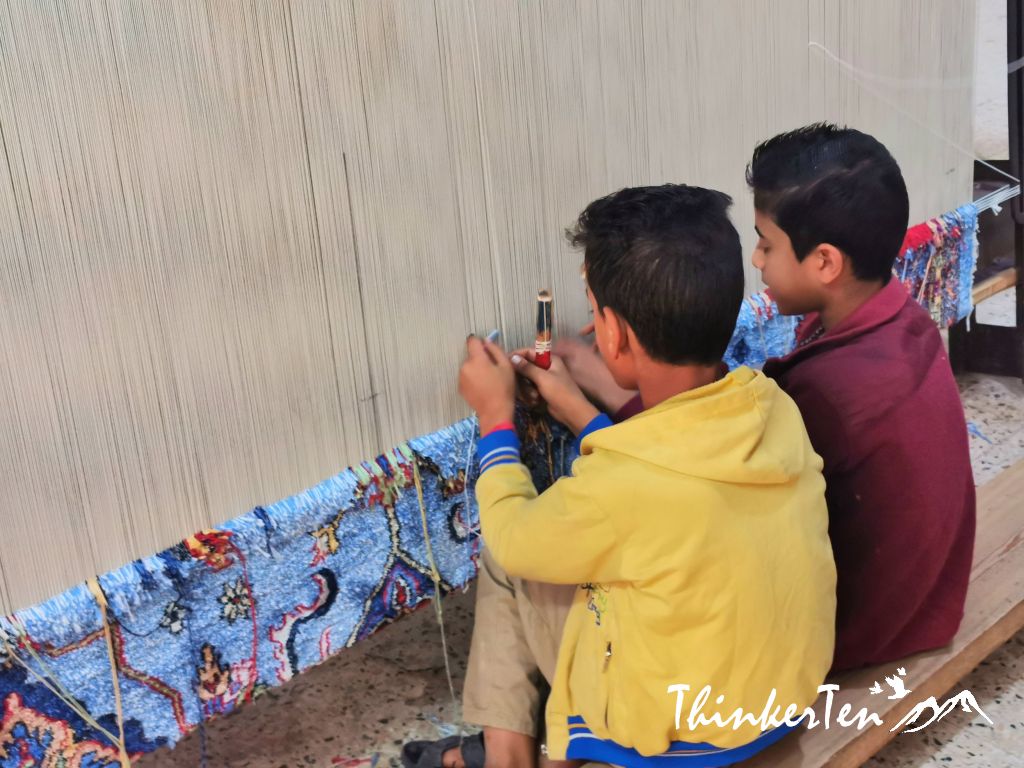 Despite those guys watching, I insisted to interact with the children with simple sign language. They invited me to sit next to them and teach me how to knot the carpet with colorful strings. My fingers were not flexible and every move was slow but in the end I managed to knot a few of them.  It was a fun experience to be able to hands-on on carpet making.

In the meantime, those guys were quite angry at this time and they came over to rush me up to the showroom so my interaction was short but sweet. 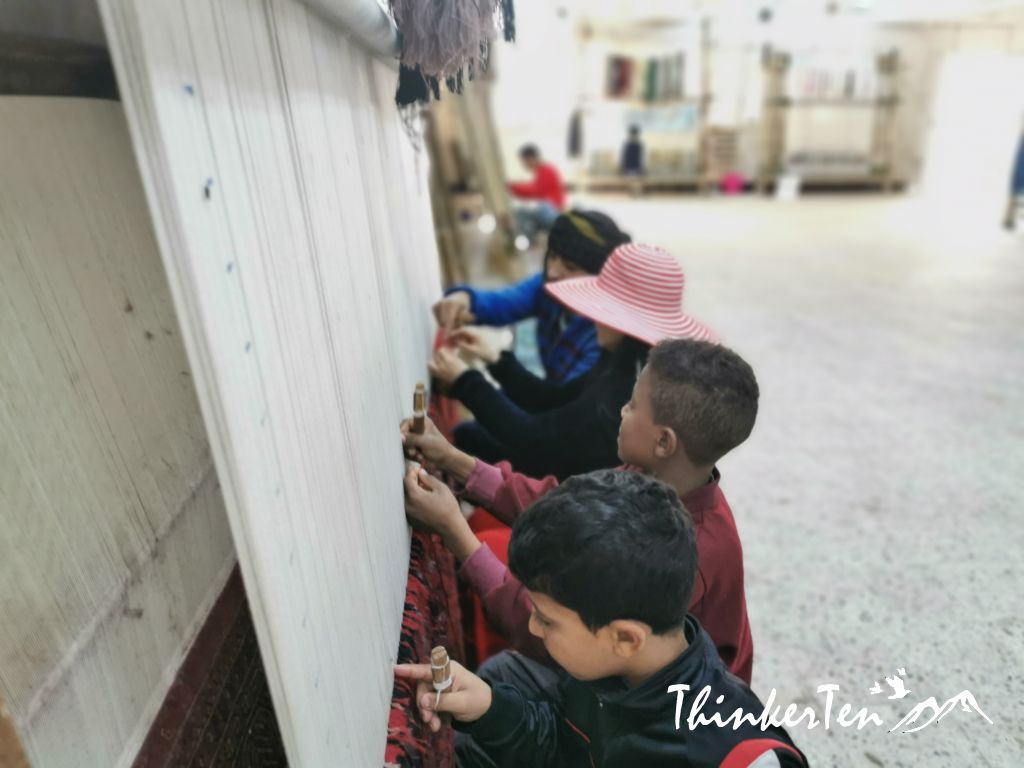 Ladies in hijab were seen working hard at the carpet school. 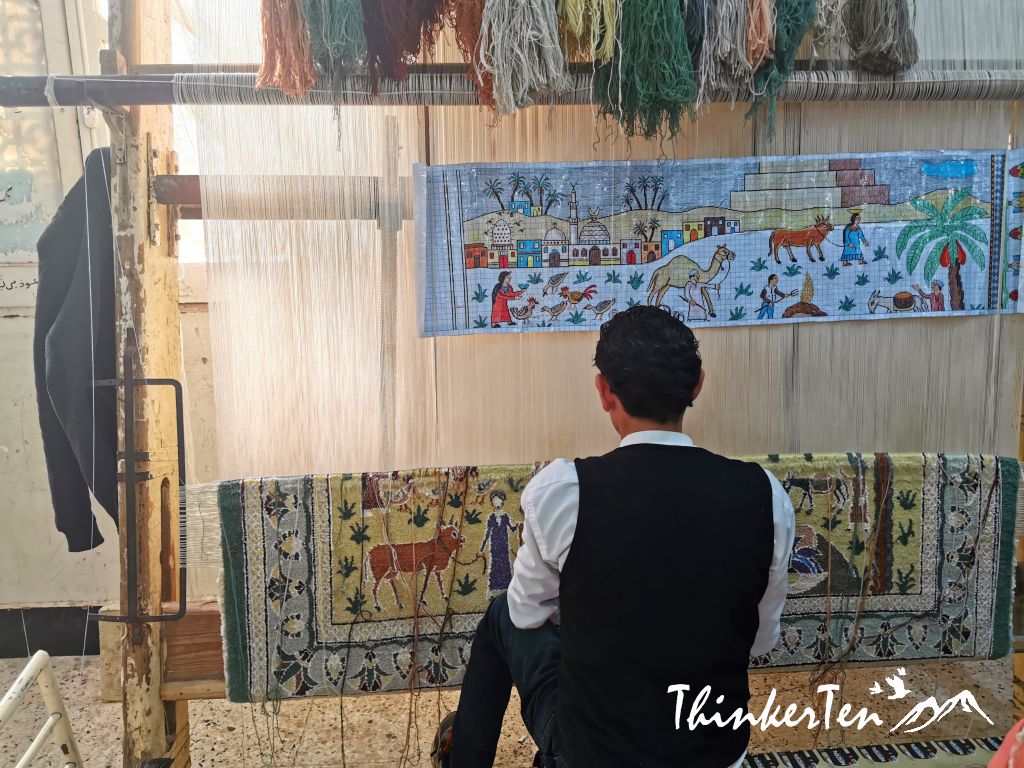 At the showroom upstairs line up with beautiful carpets for sales.   Nobody from our group purchased the carpet here.  For our tradition, we don’t prefer to use carpet in our home as it is hard to sweep the floor.

Carpets are common floor covering in most modern homes now but the history of carpet making started in ancient Egypt. Over the centuries, techniques for fashioning carpets have evolved and become more sophisticated.  You find carpets of all shapes, sizes, and colors.

Even in the open countryside, the population density is obvious. Young children can be seen everywhere, this shows the country’s high birth rate. Young ladies over the age of 16 seldom seen in the public as their activities are confined to the household.

Another sad thing was the garbage can be seen everywhere on the street or thrown into the Nile or canals, be it in the countryside or cities. This is because people are too poor to pay for regular garbage pick-up. 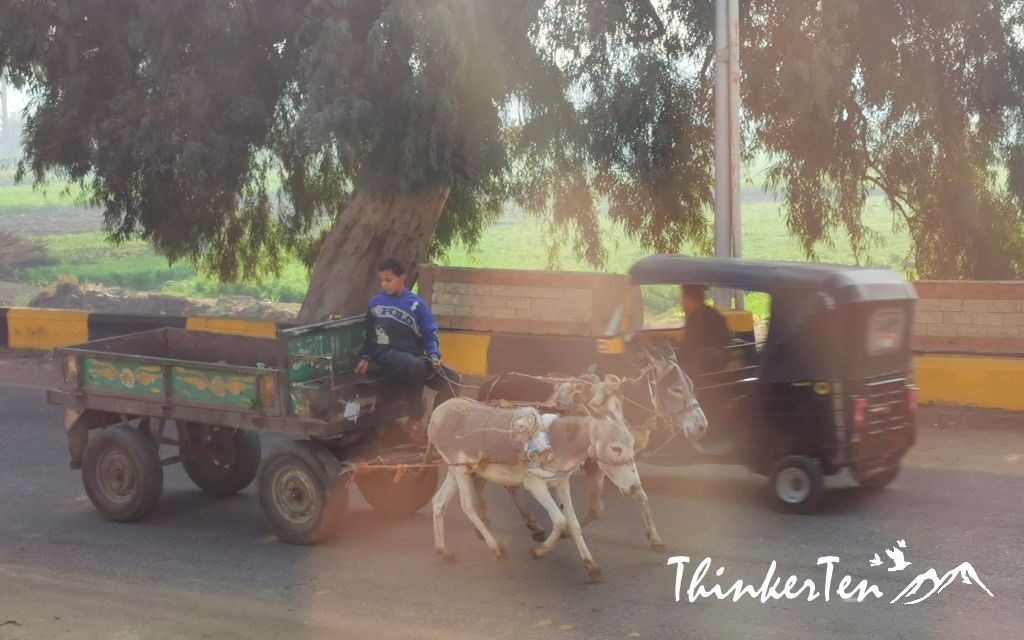 The Scam in the Great Pyramids of Giza Egypt

That must have been a lovely experience for you. Egypt is so rich in history and culture, it is a dream destination for me too. I would love to see those kids in action. Oh my, they are so talented!

How incredible! You must have had a wonderful experience in Egypt exploring all those different places.

What an interesting visit to the Carpet School and the Museum, I love how huge the statue of Rameses II was. I would love to see it in person as it looks huge.

I have never seen how those carpets are made. Fascinating!