There are so many mosques in Cairo, probably more than 1,000 mosques. You get to see it everywhere in Cairo but Citadel of Saladin is one of the stunning ones that you may want to include in your must-visit list. The structure is quite unusual as it was built on top of a hill and can be viewed from far. This historical site is a medieval Islamic fortress that has mosques and museums inside. 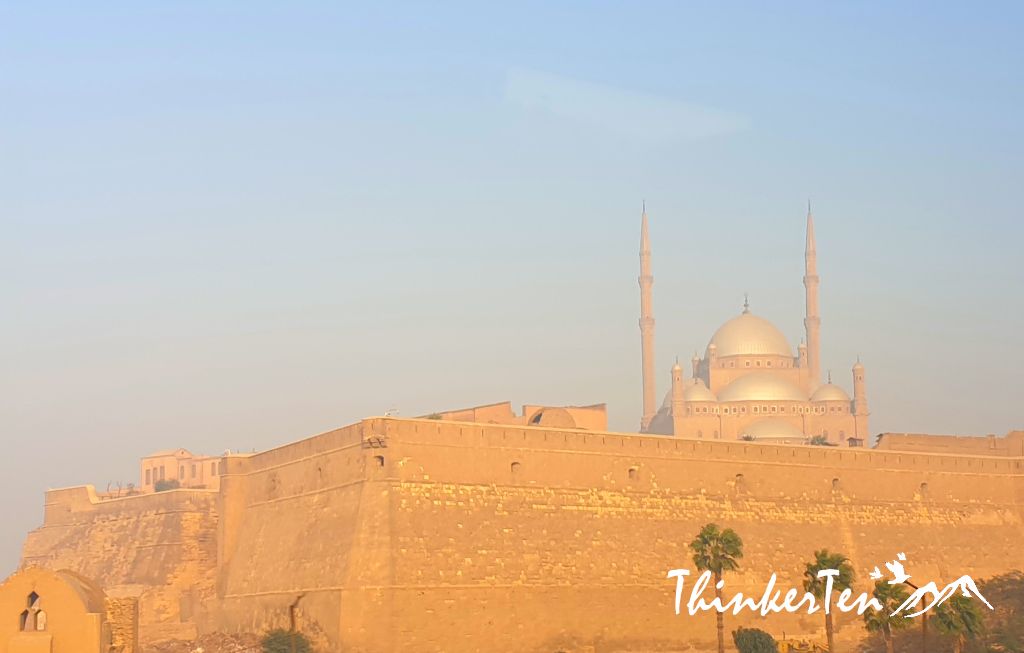 How to explore Citadel of Saladin?

This place is huge and it has two sections, the northeastern section which represents the military fortifications and the southwestern that represents the royal city through its mosques and palaces. It has several gates and one of the most important gates is Makattam gate also known as Salah Salem gate that was established in the Ottoman era.

A large tower built by the Ottoman governor Ibrahim Pasha around 1525. 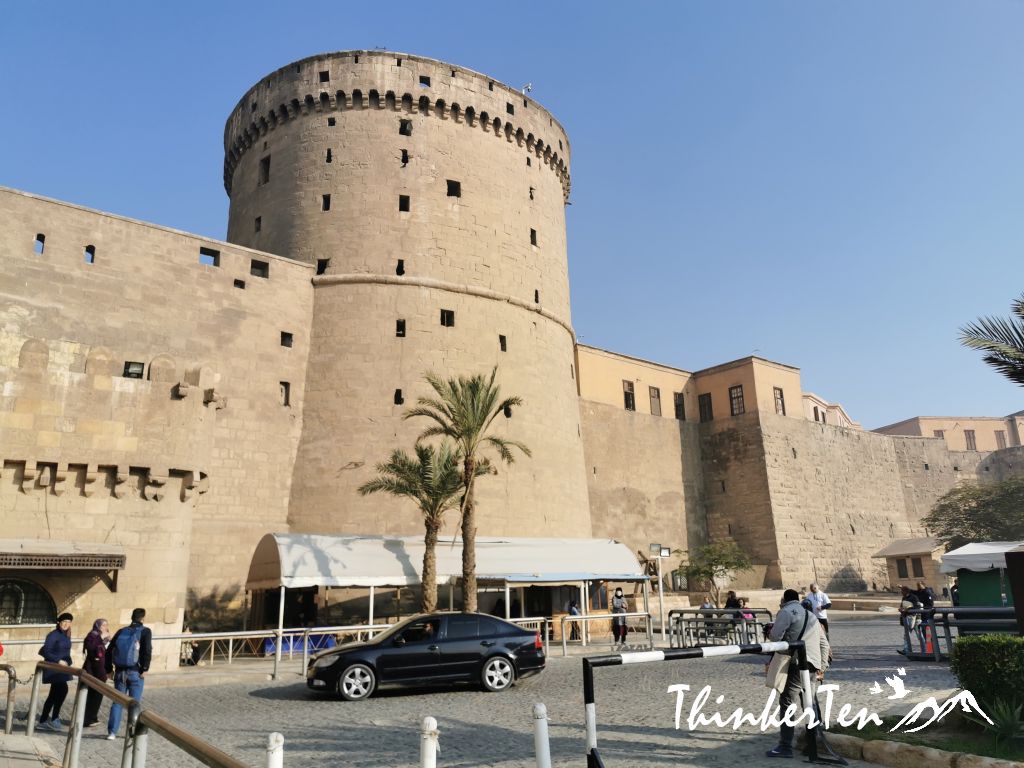 The museum is located at the north gate and house the former prison so it has exhibitions on famous political assassinations and displays of the murder weapon used.  If you don’t have all the time, you can skip this. 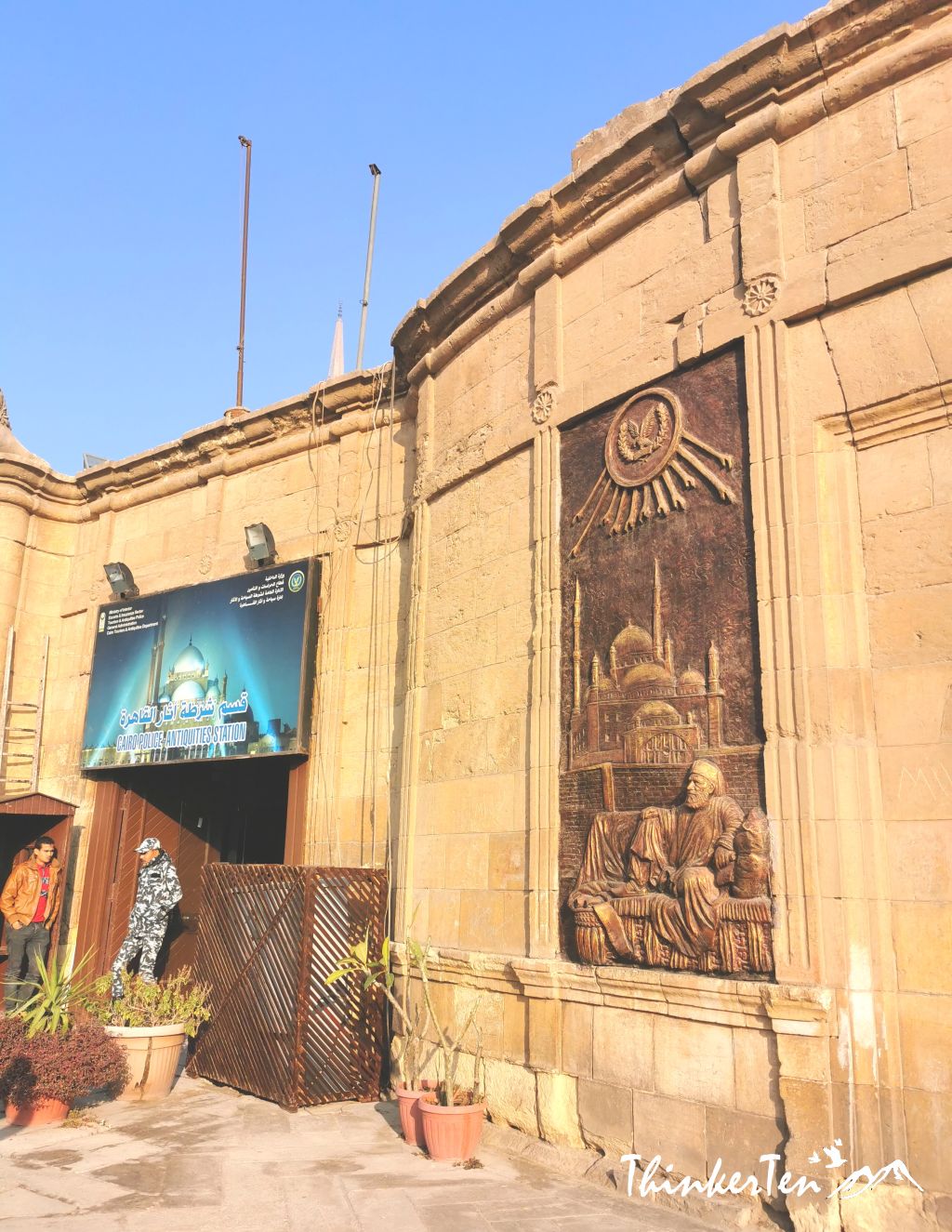 Mohamed Ali Mosque is the highlight in the citadel. If you have been to Istanbul Turkey then it is similar to Blue Mosque Istanbul as this one here was built with the Ottoman style. 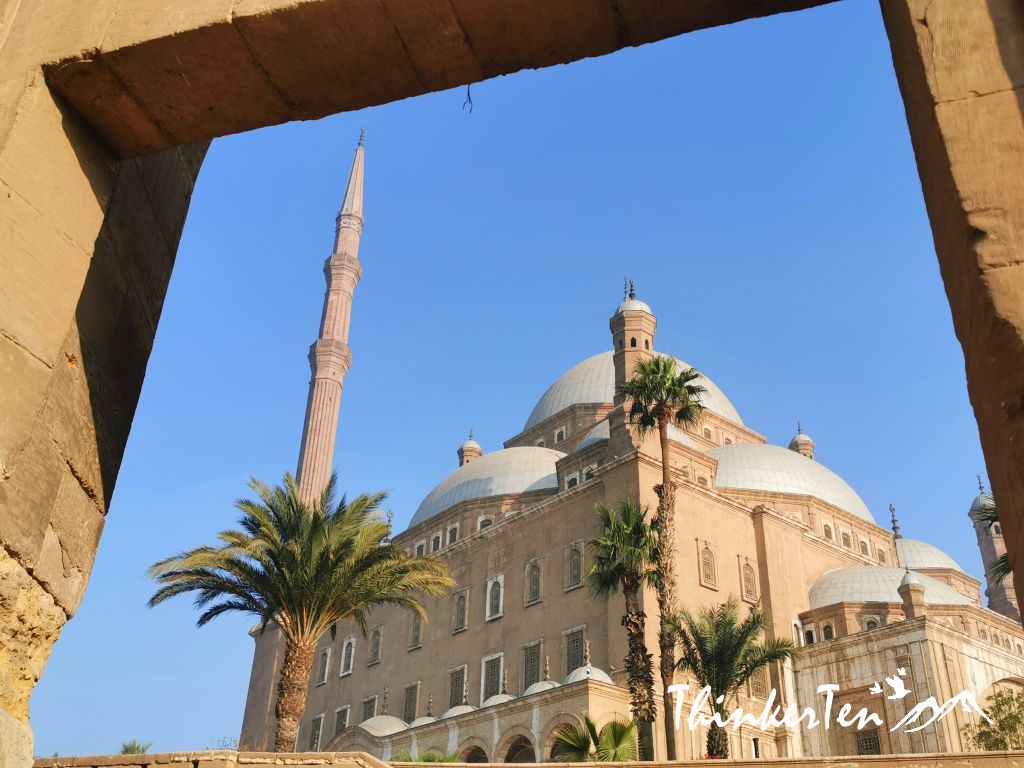 The facade is still looking good with big domes and tall minarets. The exterior is made from alabaster stones but not shiny white.  This mosque is also known as Alabaster Mosque When I stepped into the mosque, my first impression was this looks pretty familiar. This looks almost the same as the Blue Mosque in Istanbul. 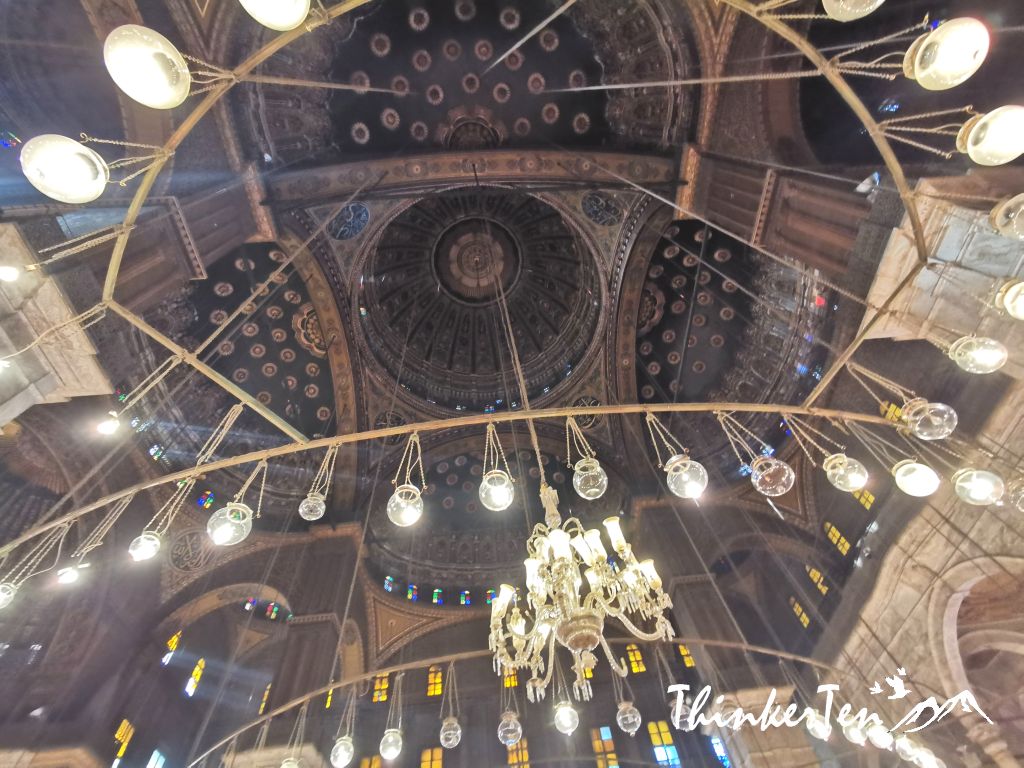 The interior is massive which can have a capacity for up to 10,000 people. You will see big chandeliers and colorful stained glass windows.

Shoes need to remove before you go into the mosque. But there are some sellers selling some shoes cover outside. If you do not want to remove your shoes, you can buy the shoe cover. The headscarf for the lady is not necessary. 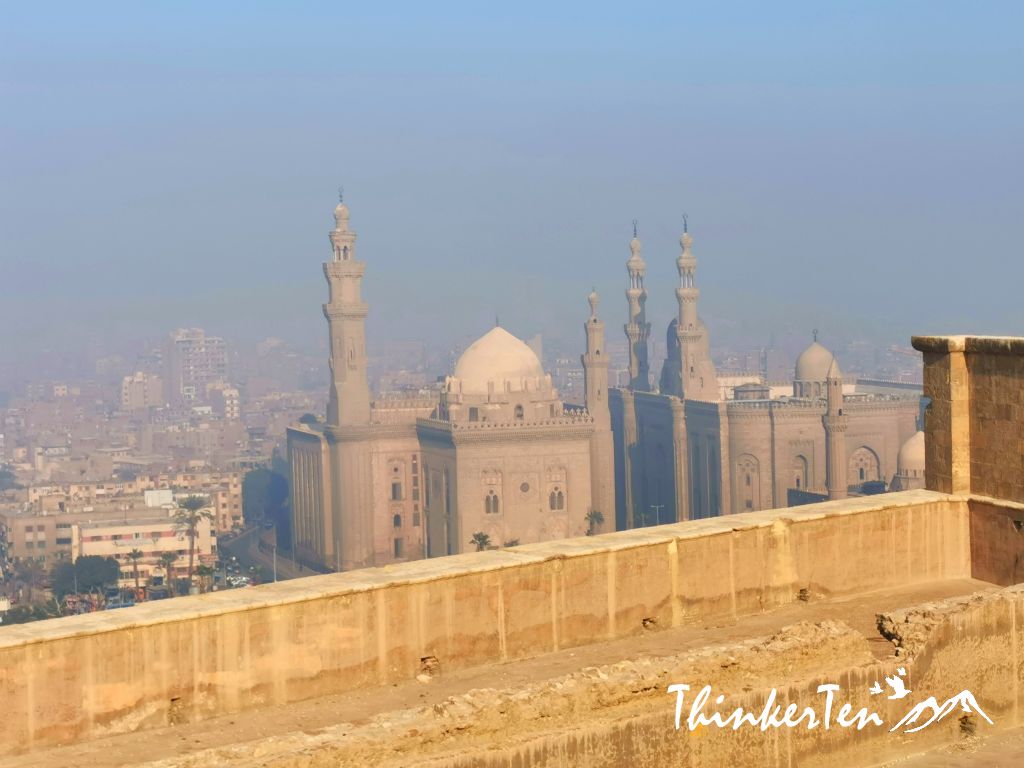 Outside there are beautiful views of Cairo city. You can even see the Giza pyramids in the distance.

At the top, you can see Cairo is a very densely populated city since it is the capital of Egypt. The majority of the people have no choice but to live in Cairo because of the Nile River and most of the other areas are mainly desert. 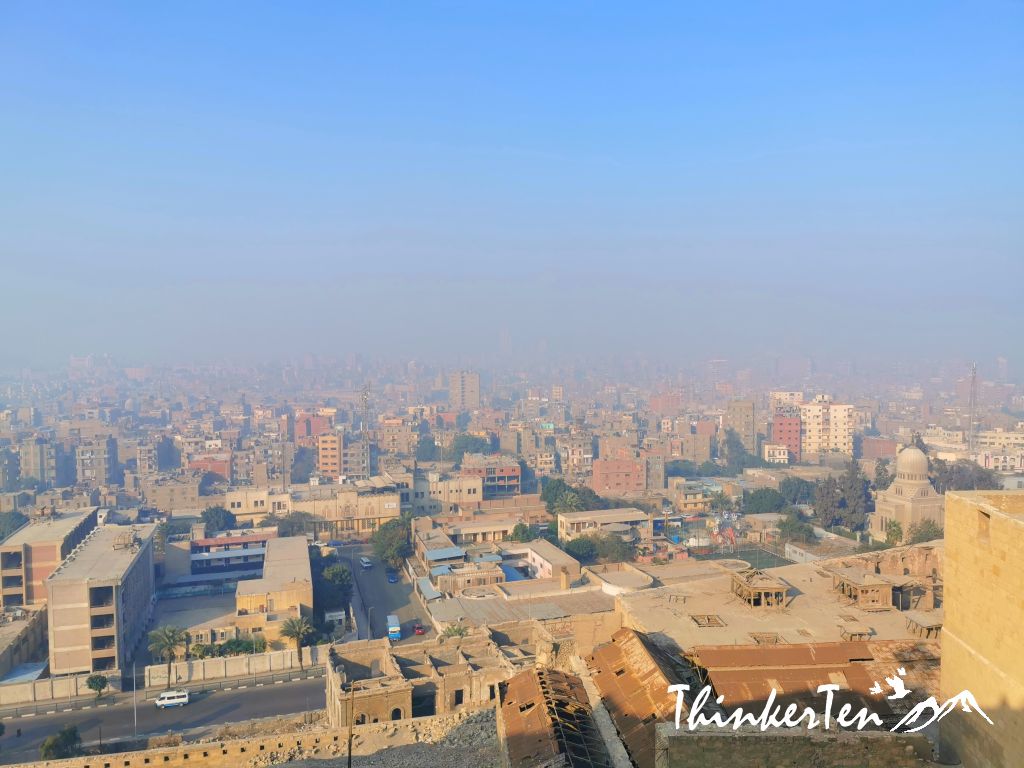 Citadel of Saladin is an interesting place to visit and there is a beautiful mosque at the summit of the citadel. This place is huge so don’t come in the late afternoon as there are more sites to visit within the citadel.  You can also see the panoramic view of Cairo City here. 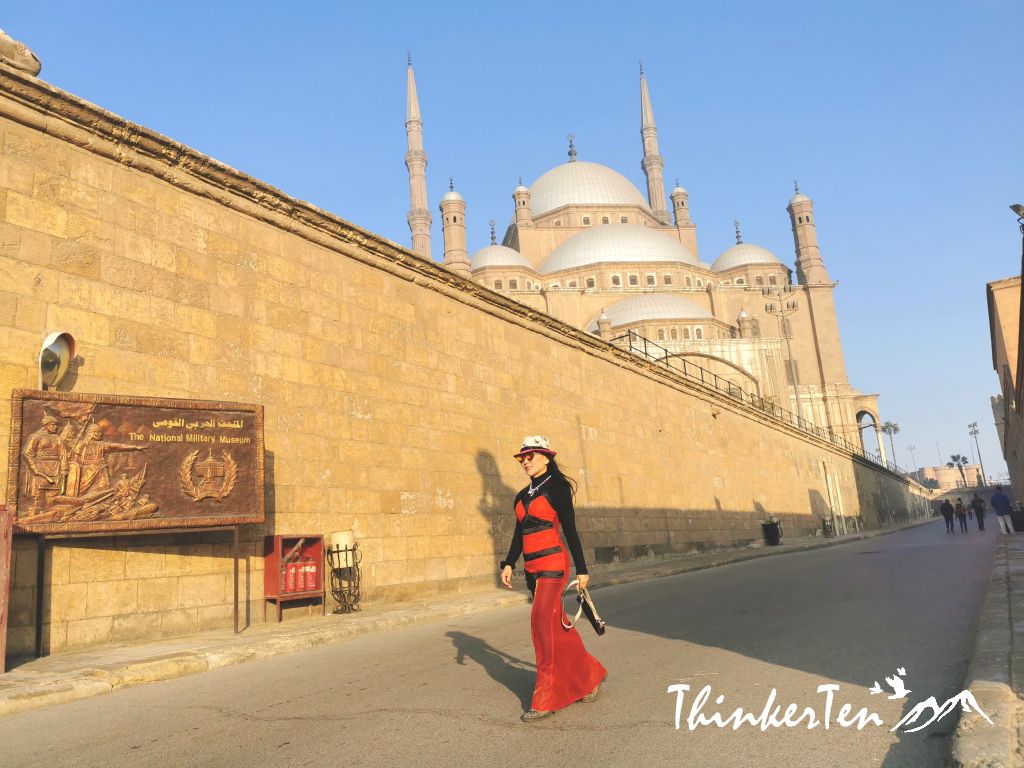 Cairo is such an amazing city. We had a blast when we were there.

I’m embarrassed to say I don’t think I’ve ever been inside a mosque, it’s lovely to see a little through your photos

Oh wow it looks so atmospheric! I’ve never visited Egypt but would love to visit some day.

I have always wanted to visit Cairo Egypt and see their amazing architecture up close and personal. I have never been to a mosque, but through this post, I feel like i went on a virtual tour and man are they amazing! You probably had so much fun at the Citadel of Saladin!

Egypt is a place I would love to visit one day. I can’t wait until we are able to travel again.

What a fabulous place to visit. Saladin has some incredible structures and it’s making me sad that I can’t travel yet to see it. Maybe one day soon.

Looks like a beautiful place to visit, all we can do now is adventure with our migination, anyway beautiful pictures.

I have never been to Egypt before, the photos really catch the beauty of the city. Maybe one day I will get to visit Cairo myself.

I love all your beautiful pictures. Saladin in Egypt looks like an amazing place to visit for sure x

What interesting places to visit. These all look fascinating – so much history and scenery. I’ve never been to Egypt and it would be an amazing trip.

Wow, just wow. Them views are stunning from the roof tops and the building are all so beautiful. Your dress is gorgeous as well by the way

All these places are simply stunning! I’ve always wanted to visit Egypt, especially Cairo. Thanks for all the info!

I’ve never been to Egypt but these pictures make me want to put it on my bucketlist! Such a lovely place, thnaks for the inspiration.

The mosque looks breathtaking, I’d love to visit one day. I’m a bit of a history geek and love visiting historical buildings, they are always full of character and stories.

Egypt looks like a lovely place to visit, it has been on my wish list for some time now..I would love to visit the place and have a look at all these lovely architectures.

My daughter and I were learning all about Egypt last week and she has actually written a little travel bucket list of all the places she would like to visit. It has been a place I’d love to visit.