Truly the paradise on earth!

Gulmarg lies in a cup shaped valley in the Pir Panja Range of Himalayas, at an altitude of 2,650 m, about more than an hour drive from Dal lake. Gulmarg is famous for its ski resort and icy mountains. People compare Gulmarg with the ski mountain with Switzerland. I an tell you is as beautiful! 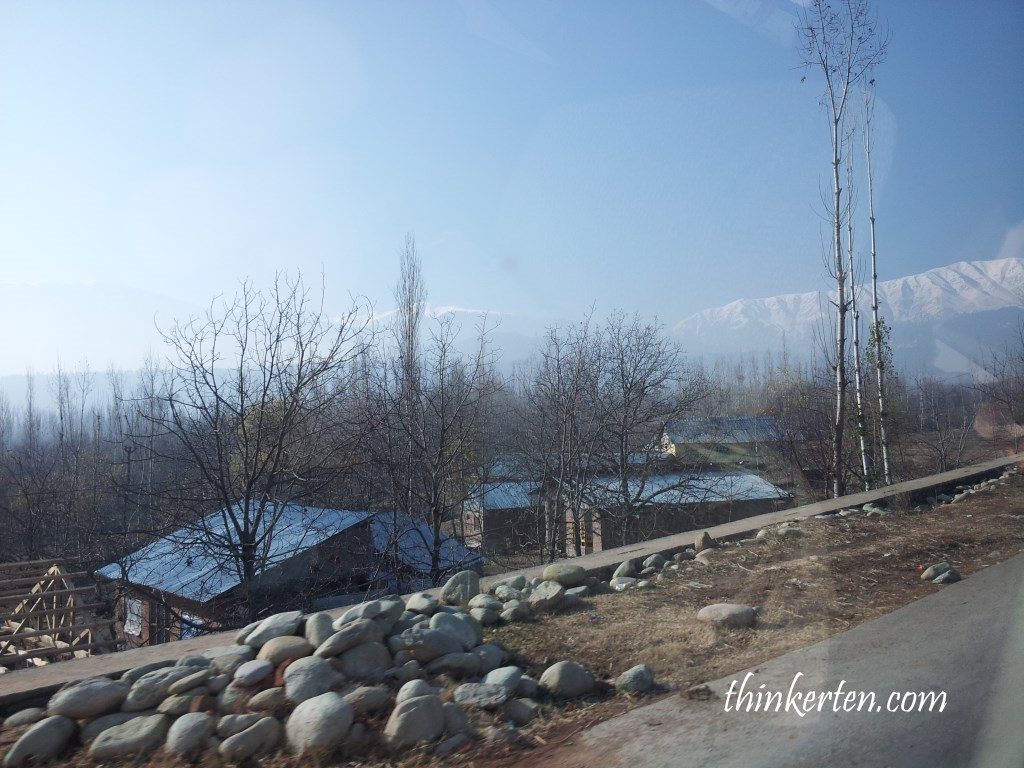 4 Wheel Drive up to Gulmarg 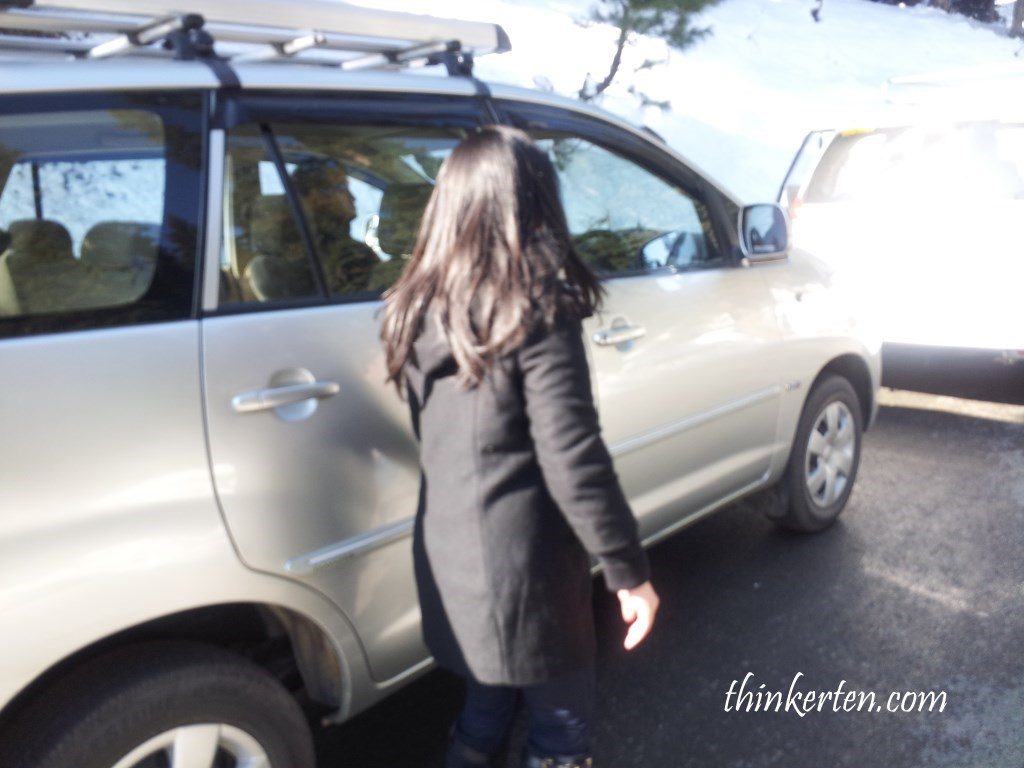 Gulmarg has some of most amazing treks in the world and snow conditions are fantastic and you can get deep powder especially in the winter season, it is also accessible in the summer.  Finally reached the skiing area, a lot of walking.  The sun is very bright and glaring because I was at very high altitude, I used a scarf to cover my head, else I go blind. 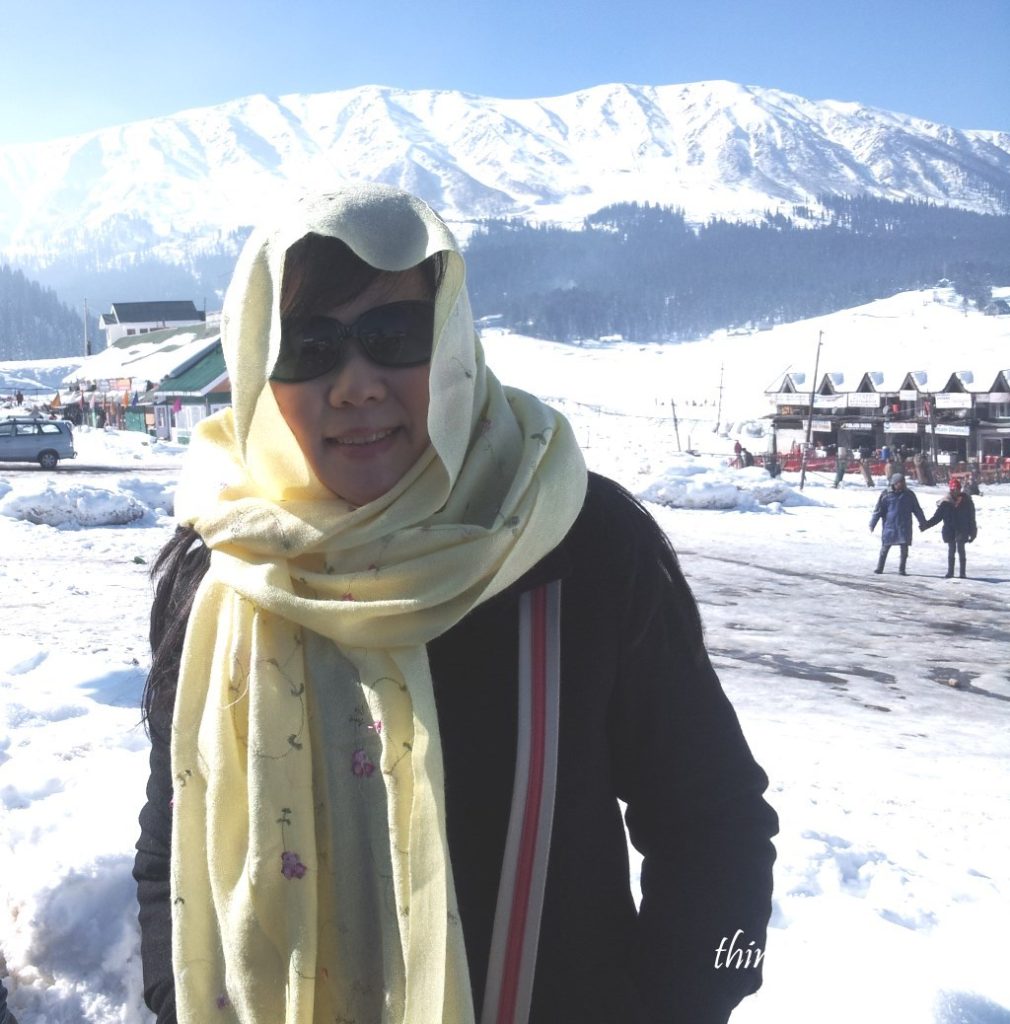 The place is famous for skiing but we were here for the sledging instead. At first I thought it was some kind of animal sledging, expecting deer. To my surprise, hundred of human sledging waiting for us in the majestic hill station. 30-50 locals who were wearing Phiran costumes ( all look like Osama to me ), long loose top with dark colors and loose pants, surrounded us and forces us to choose their sledges and ride with them. At one point, I thought I was swarmed by the terrorist in Afghan. (They are actually nice people)

It was an unforgettable experience, my whole butt and legs were so sore after sitting for half an hour in the human sledging. The simple sledge is made of wooden woods and there is no cushion to support when you sit down. Also, it is quite challenging to put your legs on the sledge, one need to be quite flexible else you would fell the tremendous pain on your tight and butt.

Some aging tourists choose to use little pony instead of human sledge the sledge is too challenging for them to sit on.  Anyway, there is no harm to try the human sledge to support the local community.

After an hour of the terrifying experience in the human sledging I reached the mid station and have some quiet moment with the beautiful nature. I breath in as much clean oxygen as I could, I felt the air was getting thinner as I was closer to the peak of the mountain.

Snacks and hot drinks and restaurants in the midway

Before you get into the Gondola, you can have some hot drinks and snacks, the stairs up to the Gondola ropeway is pretty slippery, beware of that.

Line of Control/LoC Indian and Pakistan

One of my mission is to locate the LoC, which is the military control line between the Indian and the Pakistan, a line which does not constitute a legally recognized international boundary. I heard you can see it from the top of the mountain. 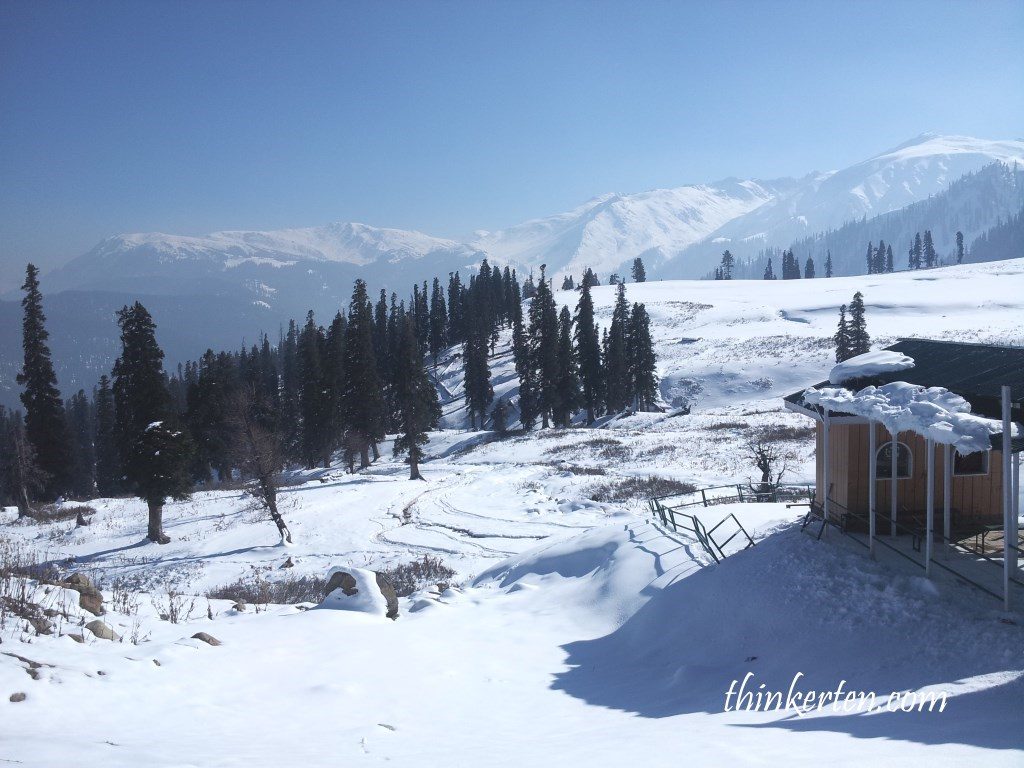 Afghan look alike Guy pointing a gun at my back

Kashmir was part of the Mughal Empire from 1586 to 1751, and later unti 1820, of the Afghan Durani Emprire. Once you arrived Kashmir, you would realized people here don’t look much like Indian, they look more like the Afghan even the style of clothing – refer to below picture. From the picture, it looks like he is pointing a gun at me at the back with his Afghan style costume. 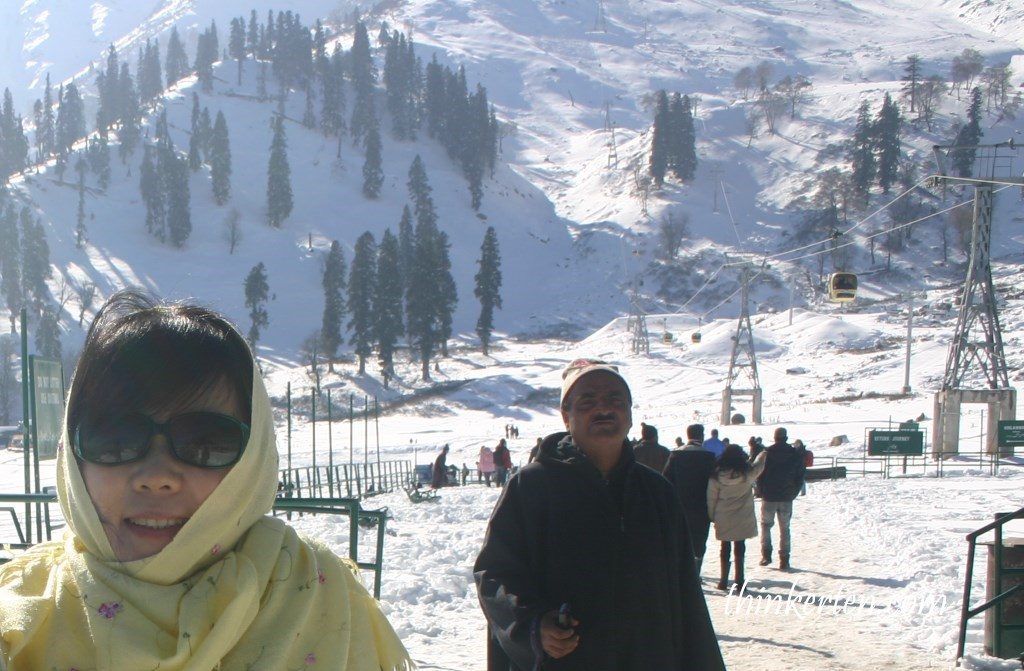 Islam came to Kashmir in the 14th C. with the establishment of the Shahmiri Sultanate in the region.  Some of the leading members of the new dynasty were immigrants from Persia or areas with heavy Persian influence.  Thus along with language, dress, customs many types of arts and crafts linked to Persia also flourished in the region. 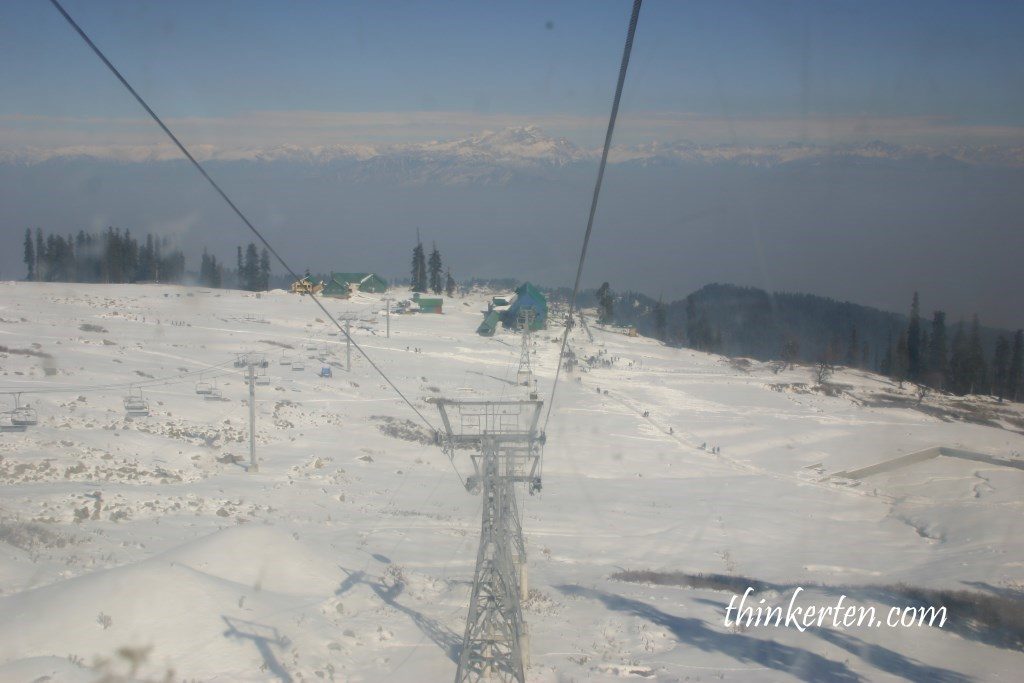 Picture taken from the Gondola, the view from above was even more spectacular, you can see the whole area was covered with carpet of snow.

The two-stage Gondola ropeway ferries up to 600 people per hour to and from Gulmarg, it was built by the French as I could see posters showing “a masterpiece of French engineering”. 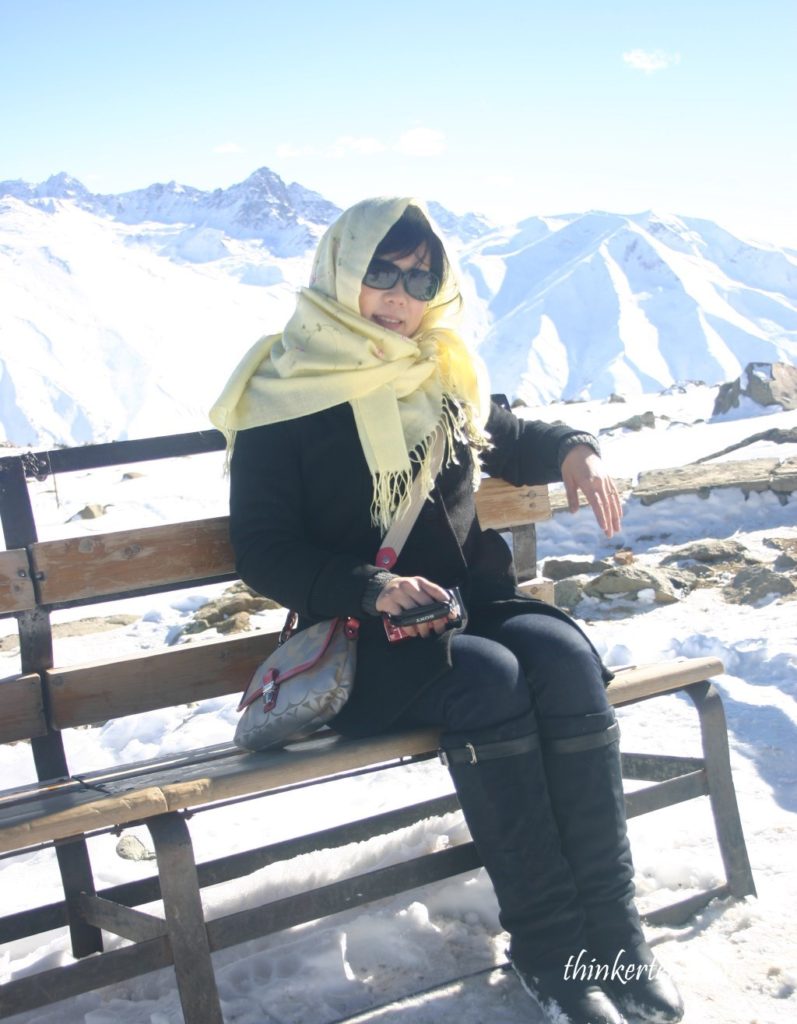 I have finally reached the “Paradise on Earth”!

I noticed less people at the highest summit, most people who made it up here are tourists. It was breathtaking to see my first magnificent Himalayan panorama.

I could feel the air is even thinner as I started to have serious headache and difficulties in breathing. 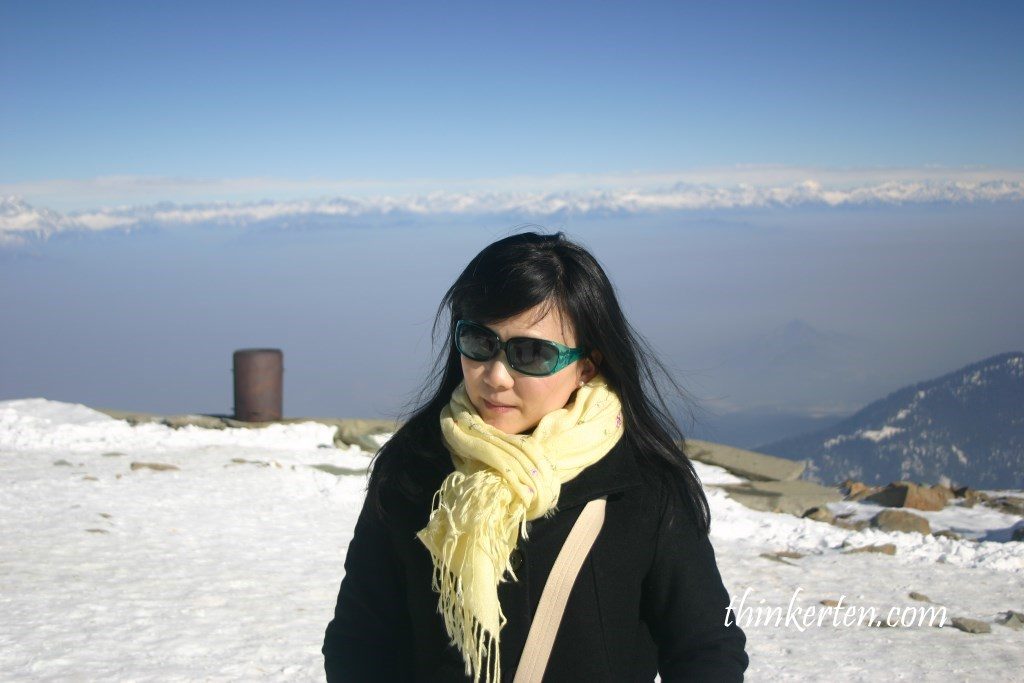 If you ask me is it safe in Kashmir, I would tell you it is pretty safe until something really happen. People are friendly, welcoming and kind. You don’t see any beggars asking for money. The locals sell you things from their shikara boat, or in the Shalimar Mughal Garden, they do not beg for money. If you do not buy, they just walk away.

This is truly a paradise on earth, beside the scenery, you got to taste the strong Kashmiri cultures and people, which were immigrants from Turkey, Iran and Afghan settle at the valleys. The Phiran, the most eye-catching costume one I landed in Kashmir. I paused a while and thought I was in Afghanistan. Lady has more colorful while men wear darker color of phiran.

When I think of Gulmarg, all I could remember is the human sledge and the Phiran!

India : 1 What to expect in the Mysterious Boat House Experience in Dal Lake Kashmir

Hey, I accidentally came by your blog & This post is soo rascist. I guess you need to rework on your assumption of people looking like osama & few other comments made by you keeping people’s sentiments in mind. Hope you take this positively.

Thanks for your highlight. Sorry for my comment as I did not realize it sounded rude to some people around that region. I don’t mean to be racist but just an expression from my perspective. Those people wearing the traditional clothing look alien to where we were from but I do respect them and know they are good decent and hardworking people.

Your message is noted and I will be more careful with my comment in the future.