How far it is from Lucerne to Colmar?  Only around 2 hours. Colmar is a small town in northeastern France, near the border with Germany.  So we departed early in the morning from Lucerne Switzerland to our first destination Colmar in France in the morning.

Beautiful scenery on the way to Colmar

Saw a caravan on the way to Colmar, I never travel with caravan before.  It has a kitchen and a bed for you to sleep in.  Hitching and unhitching of the van could be tough I think.  If you travel with caravan, you don’t have to sleep in the hotel but you still need to park you caravan in the caravan park which most places will charge you for the washroom & fireplace facilities. 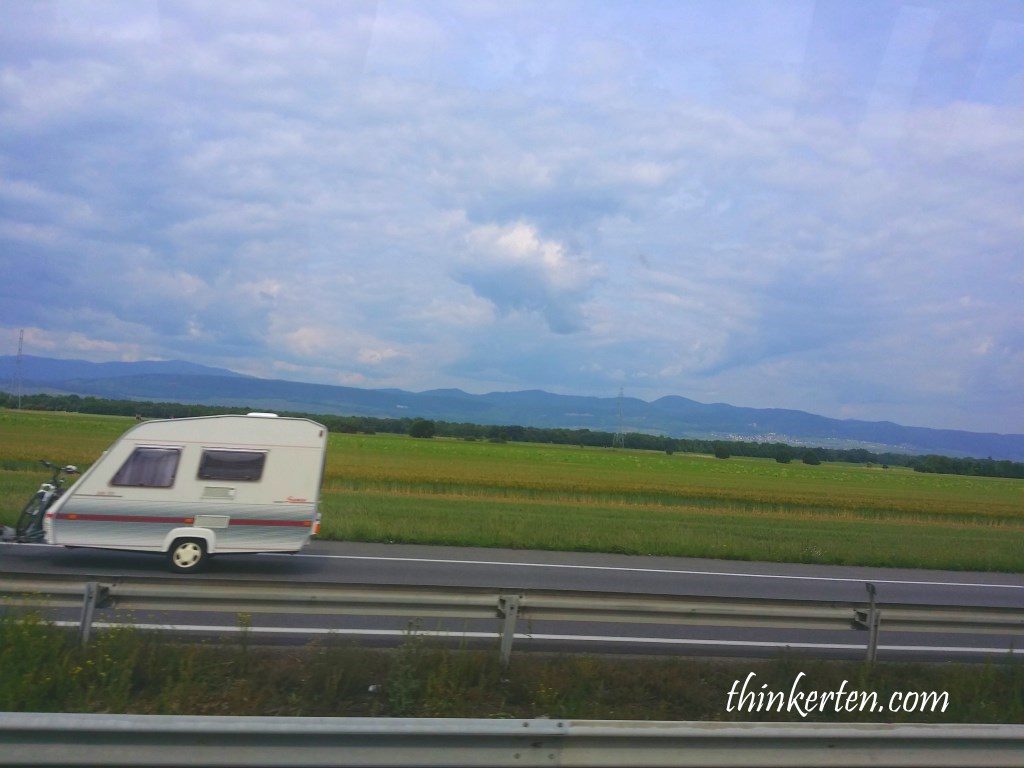 Statue of Liberty in Colmar 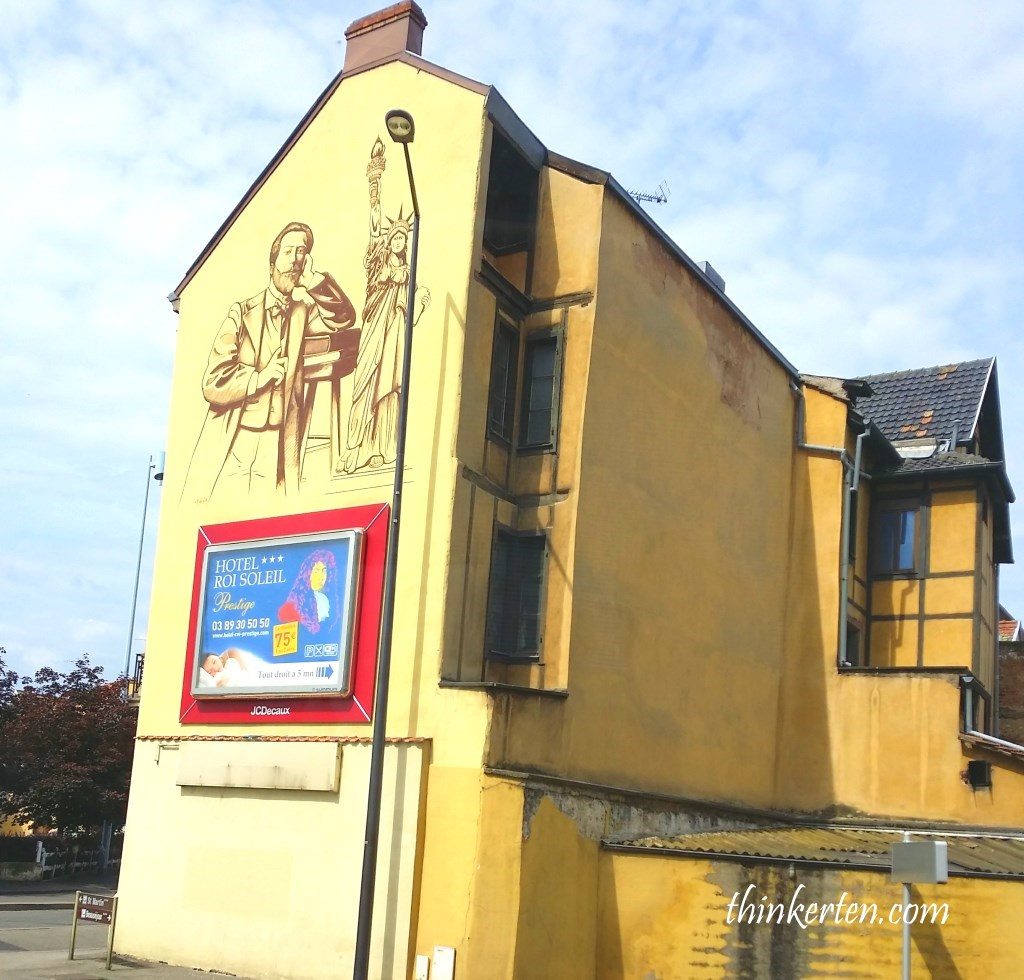 I was surprised to see a 12 m high replica of the Statue of Liberty in the middle of the roundabout before entering Colmar.   Later then only I found out the replica was there to commemorate the 100th death anniversary of the sculptor Auguste Batholdi, who was born in Colmar and designed the real Statue of Liberty.  It look exactly same except smaller in size.  I was lucky to be able to take a picture from the bus. 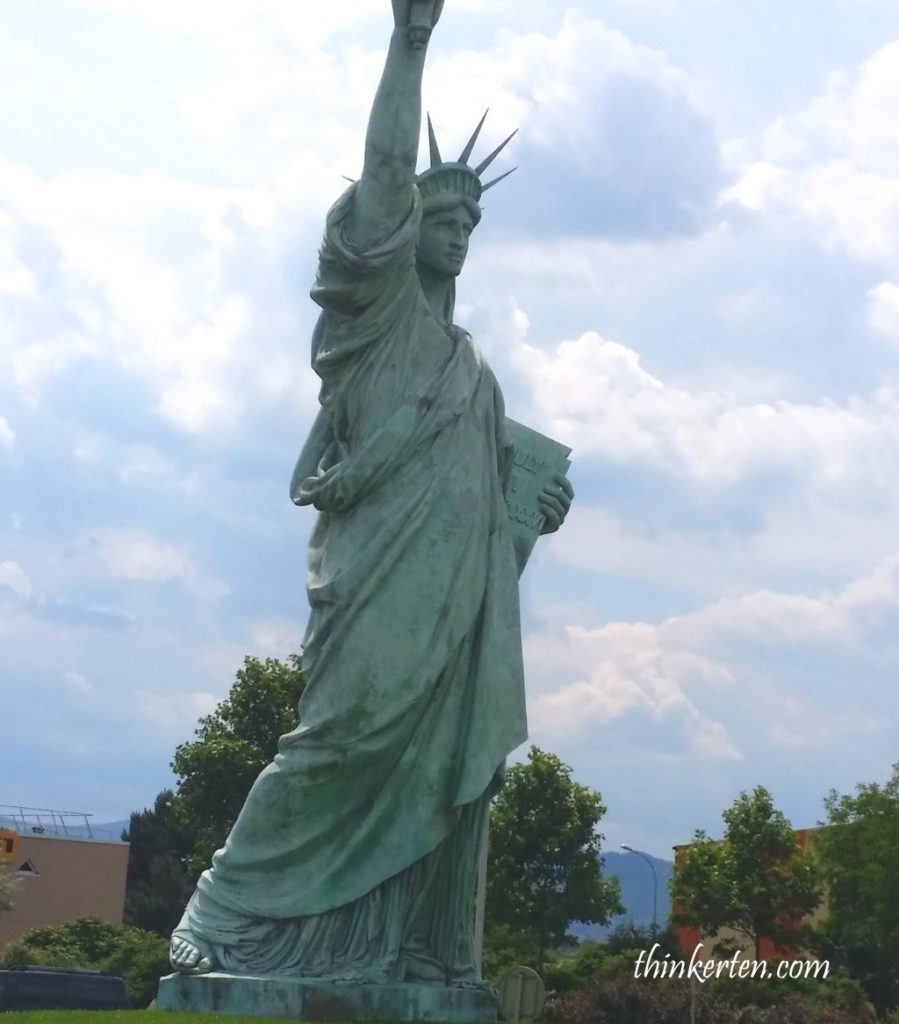 Colmar is a very small near the border of Germany, northeastern France, the town is considered one of most beautiful fairy-tale city in Europe. 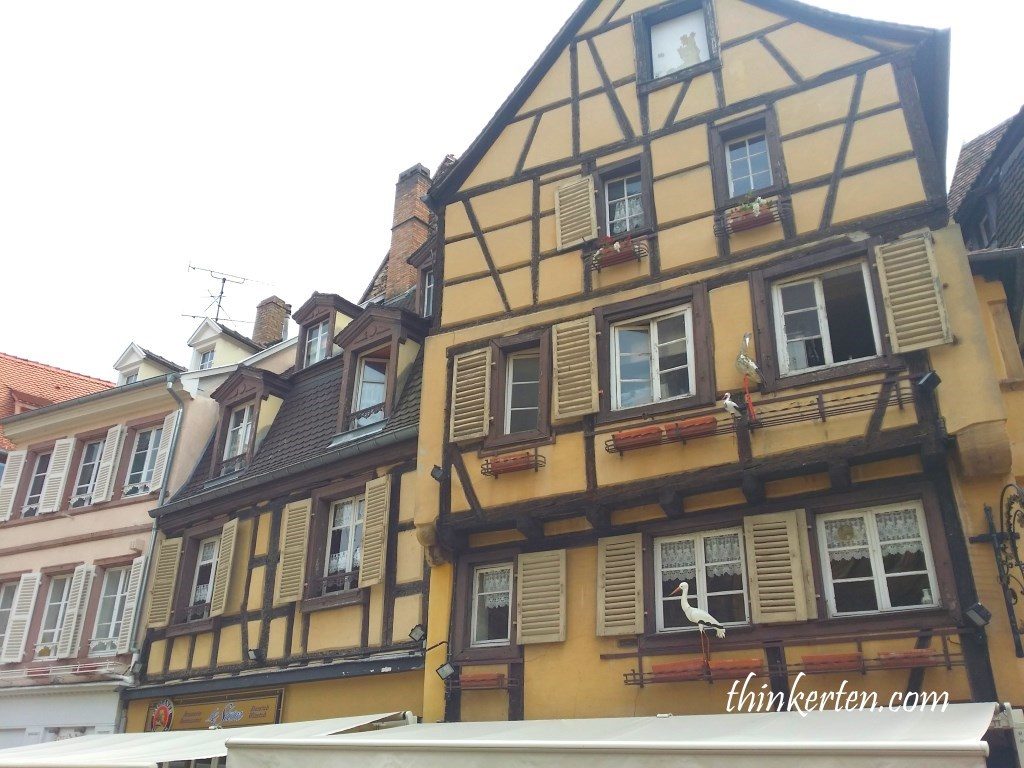 Most of the attractions in Colmar are concentrated in its old town so stand by a comfort shoes to walk around the whole town. 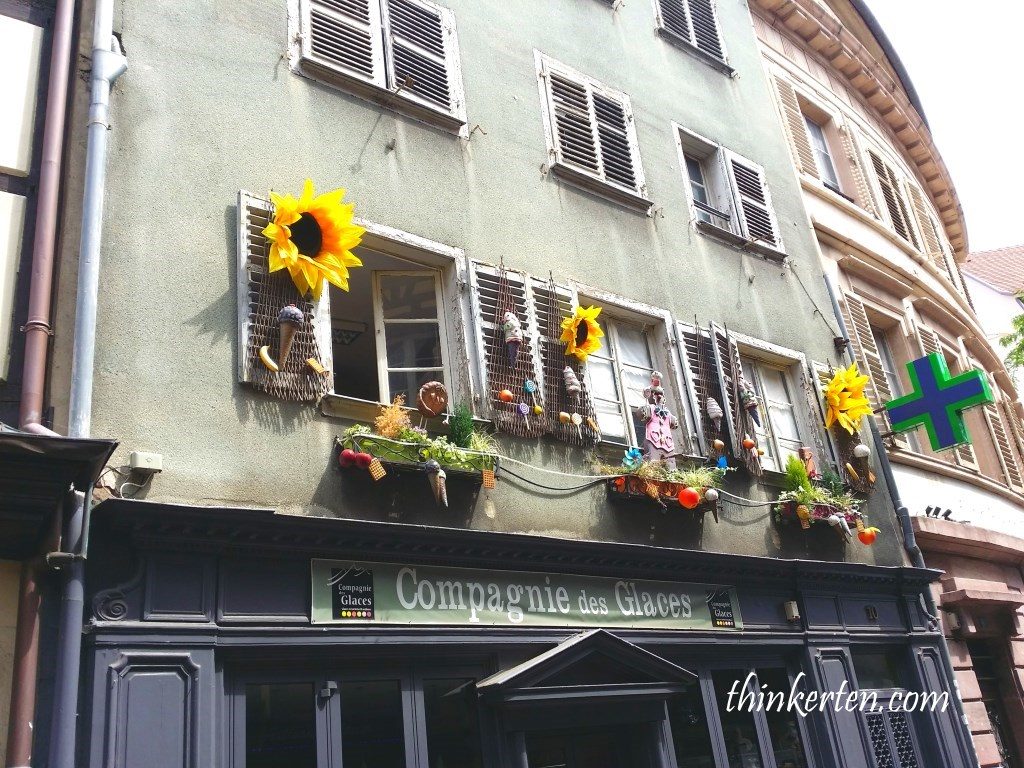 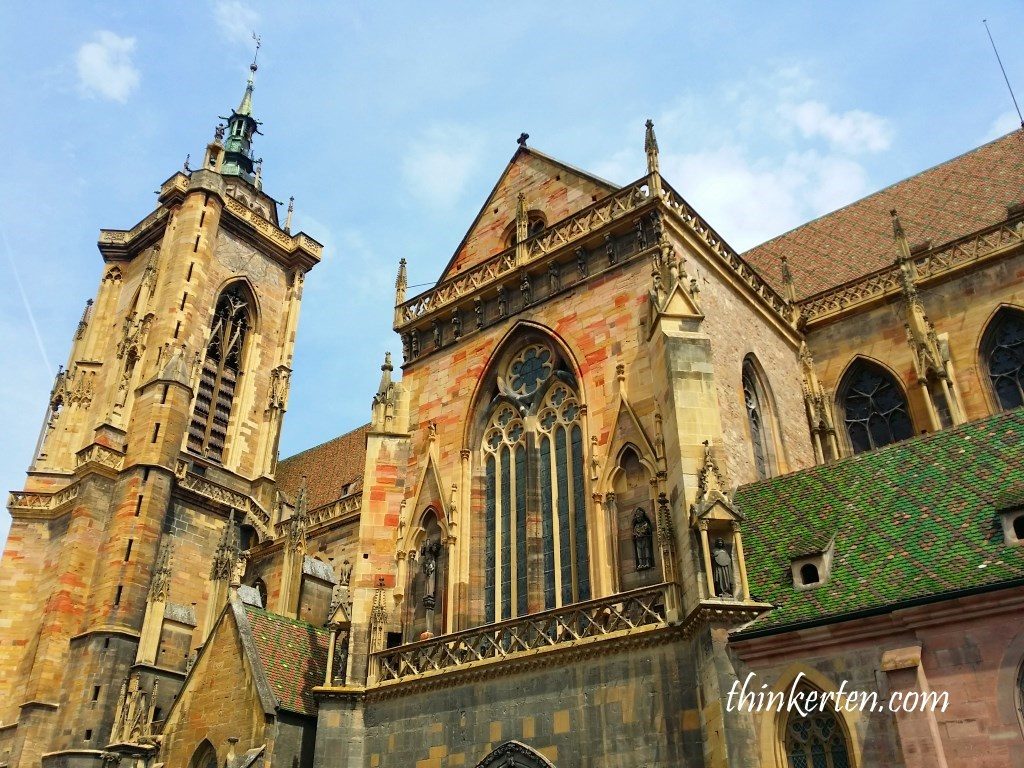 Saint Martin Church is a Roman Catholic church with Gothic architectural style.  It is easily recognizable from neighboring districts. 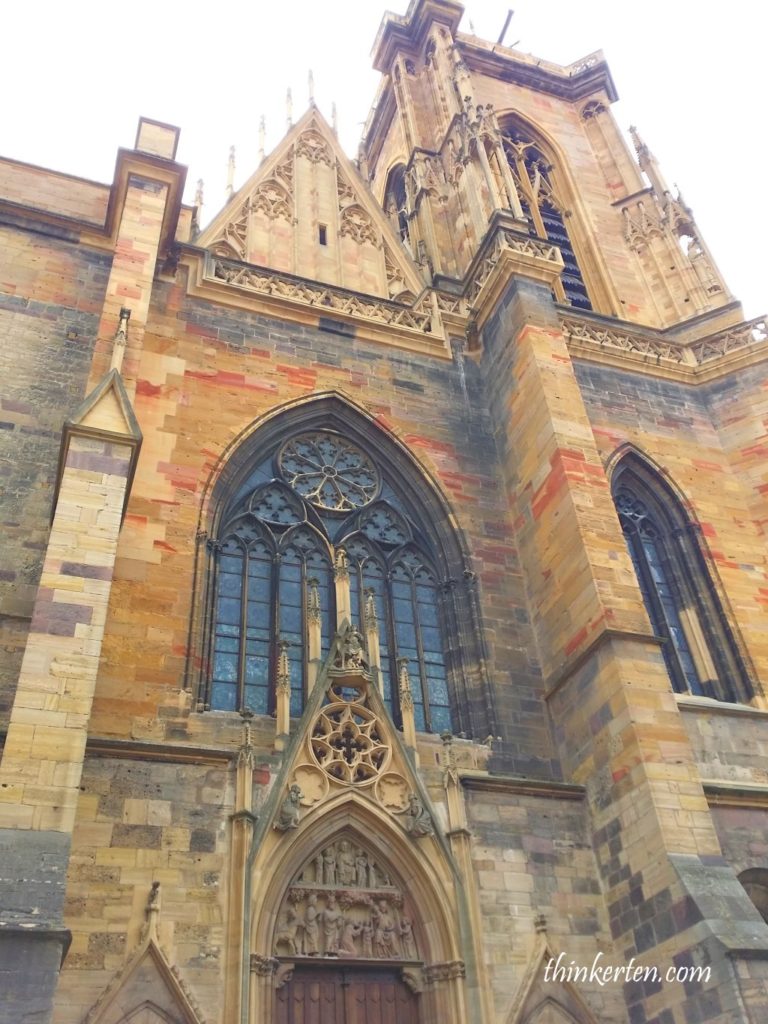 It was a beautiful sunny day in summer, weather was beautiful to walk around in the morning.  Still a little chilly for me. 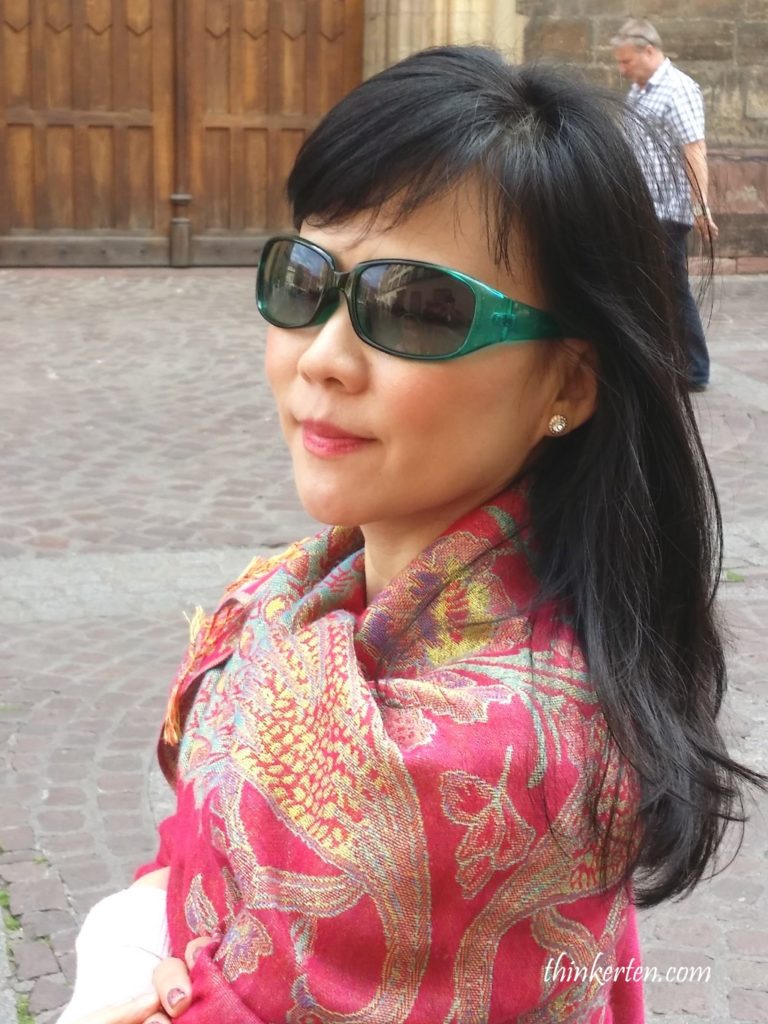 If you don’t prefer walk, you can always jump up to the tram to explore the old town of Colmar.  Audio headset will be given. 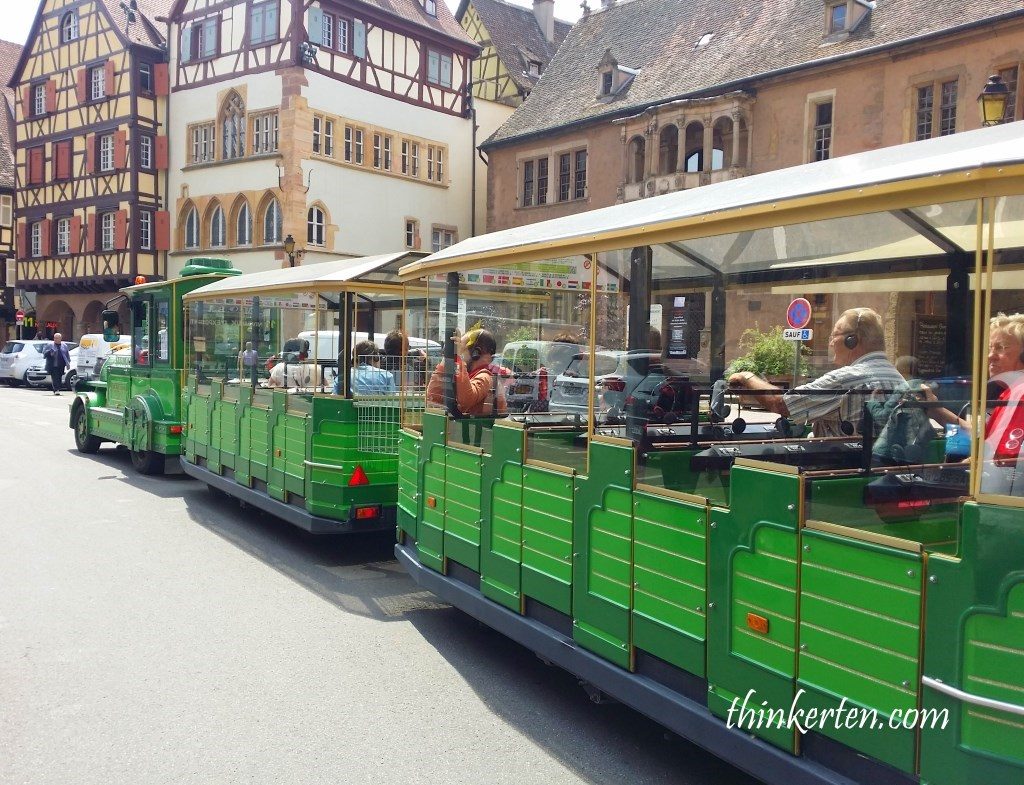 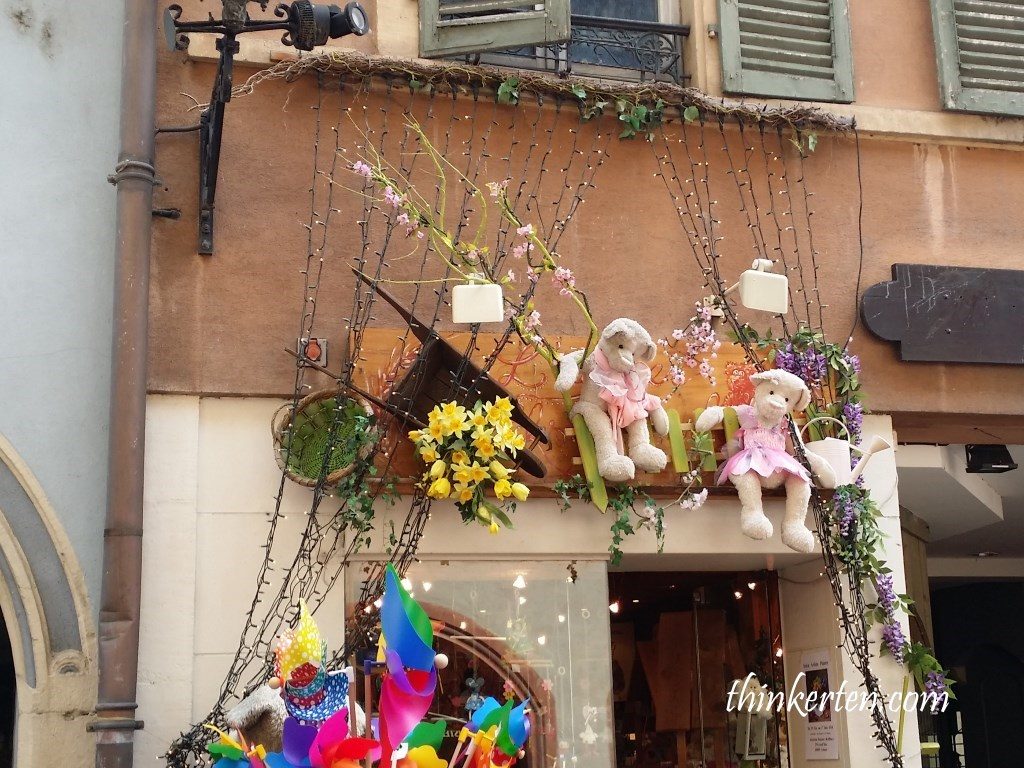 Colmar is also famous for its wine.  Two of it famous wines that comes from Alsace are Muscat (fairly sweet) and Gewürztraminer (very sweet).   Most Asian would love the sweet taste. 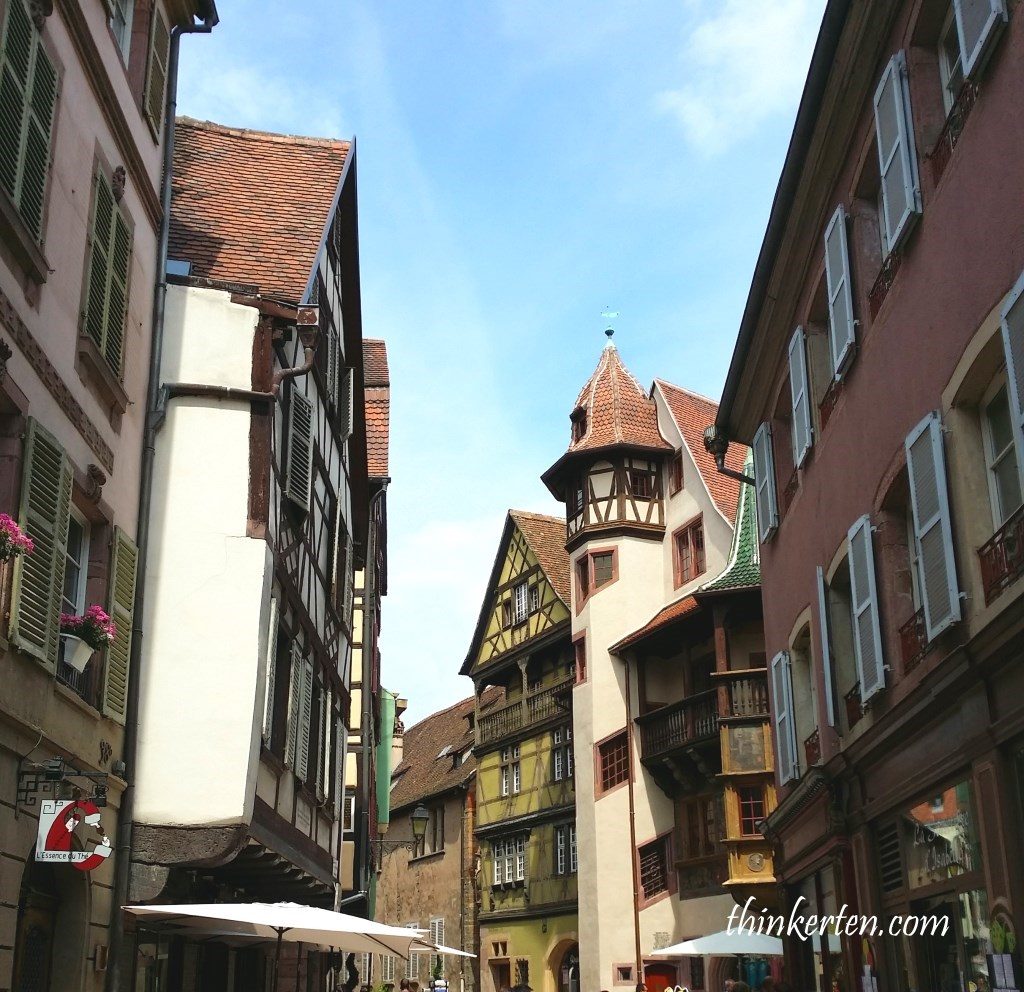 Do you know there is a Mini Colmar in Malaysia?

Do you know there is a mini Colmar in Malaysia?  It is actually inspired by the original Colmar Village, France and is owned and developed by the Berjaya Group!  It is about 45 mins drive from Kuala Lumpur to reach the Berjaya Hill Resort.  The resort is located at around 790m high so it is still pretty cool especially after sunset.  I was there many years ago and love the place.

What makes the town so unique are the houses painted with various colors which has a mixture of French and German style.  This place is so picturesque everywhere as you will be surrounded by beautiful canals, fountains and multi-color building. 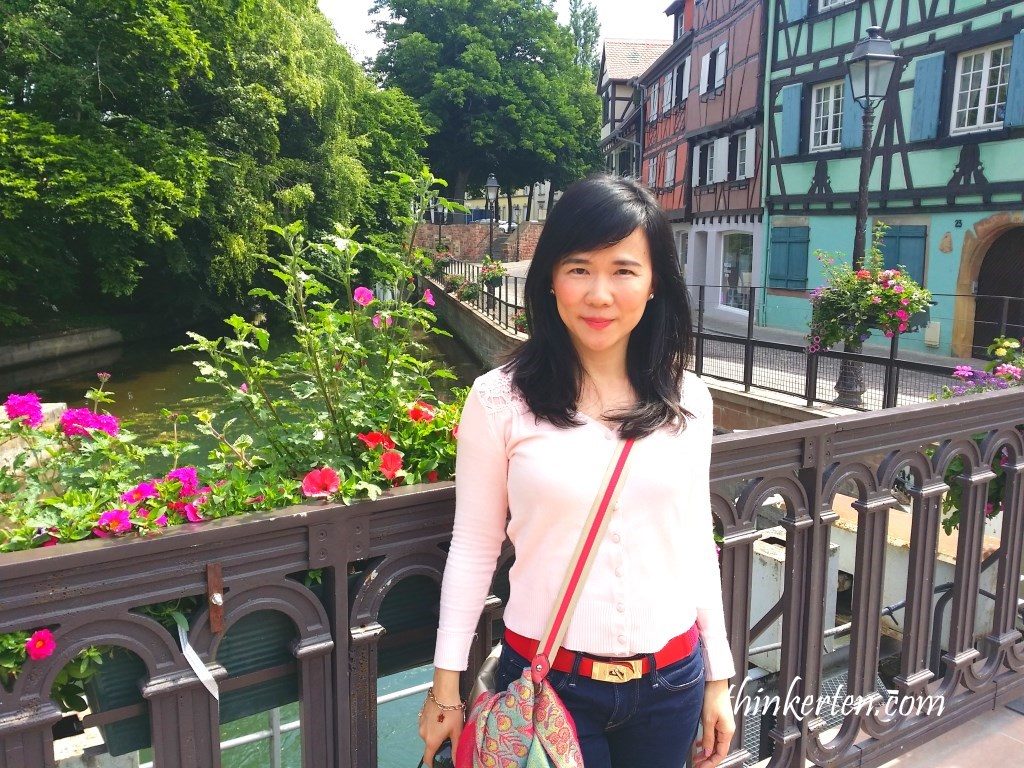 This is also known as Little Venice in France.  You can also go for it boat ride on the canals. 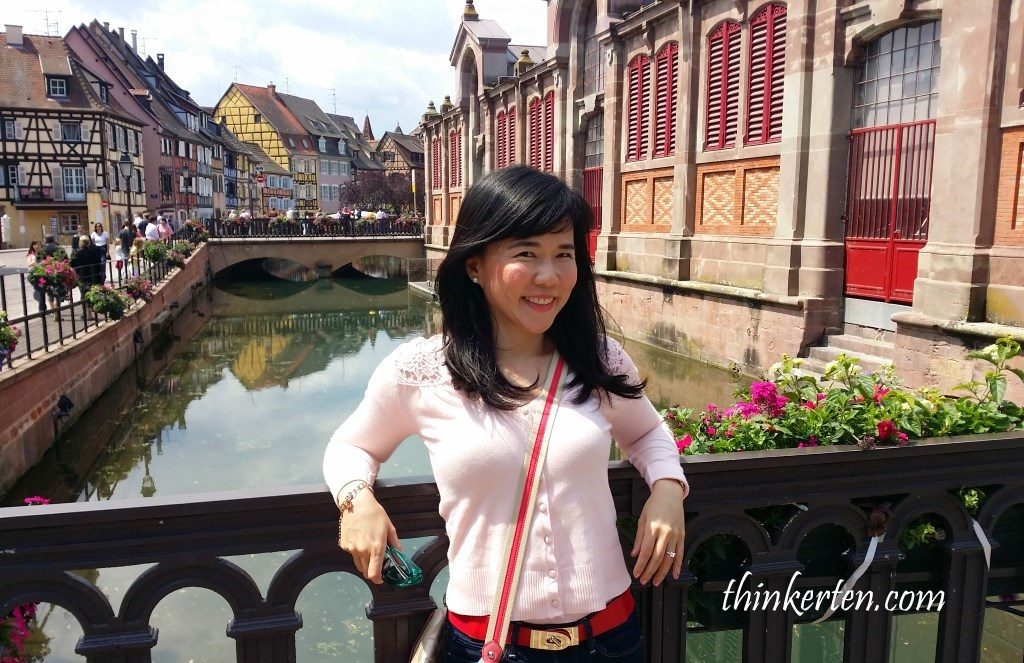 An old sandstone building behind me. 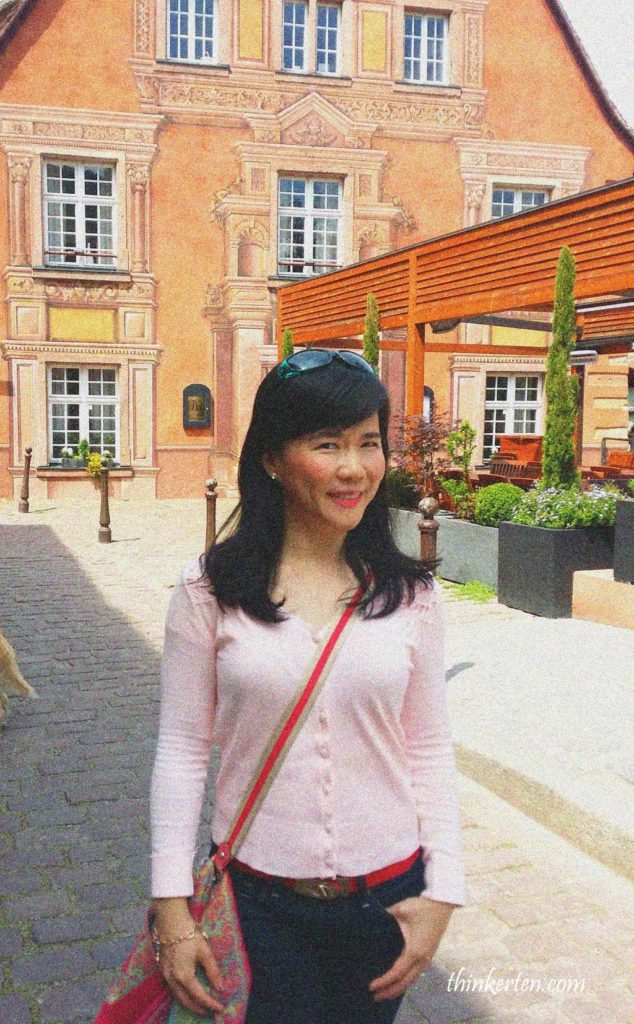 You can even dine beside the canal to enjoy the beautiful scenery but outdoor dining was all very crowded. See the below picture, Al-fresco dining were fully booked!  We, the Asian prefer to dine in the restaurant instead 🙂  We rushed in to one of the restaurant and ordered our french meal, some steaks & duck to fill our stomachs. 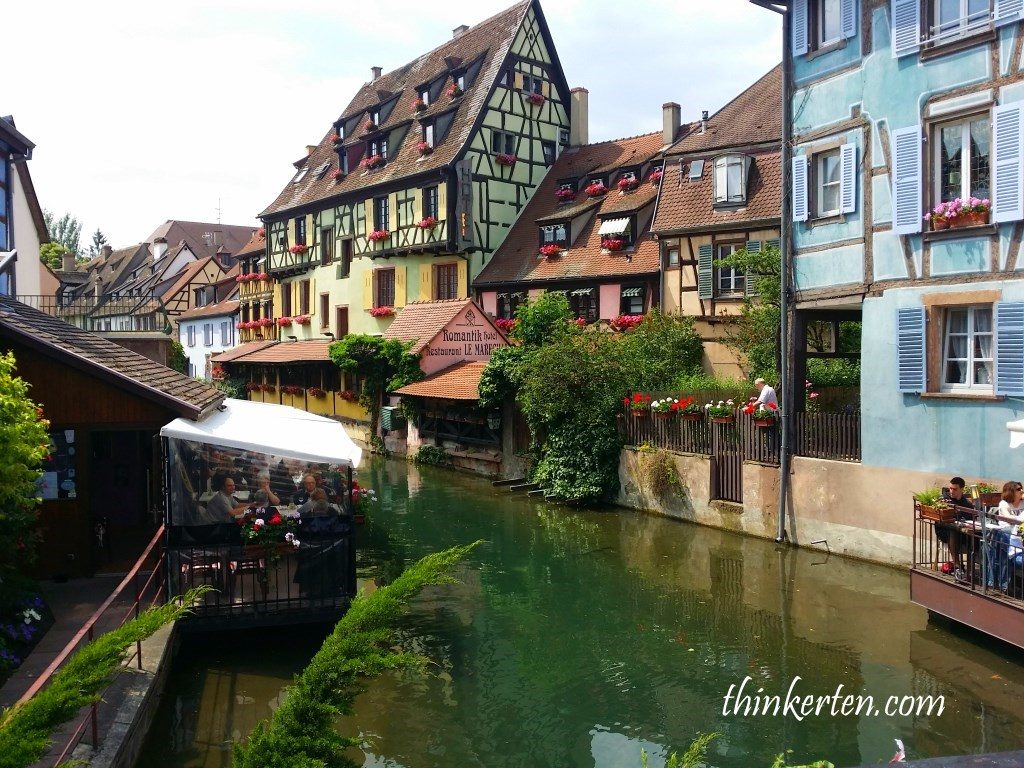 A fairy-tale town in ColmarBeautiful scenery on the way to ColmarColmarDo you know there is a Mini Colmar in Malaysia?FranceLucerne Switzerland to Colmar France - How farSaint-Martin Church in ColmarStatue of Liberty in ColmarTanners’ quarter & Fisherman’s WharfTravel with Caravan - How is it Like?Wine in Colmar
previous post