There are plenty of things to do in Belem Neighborhood of Lisbon. We first went to the most visited site called Jeronimos Monastery, then we had the most famous Portuguese egg tarts at Pasteis de Belem (only 5 mins walks from Jeronimos Monastery). Then we proceed to the bank of the Tagus River to check out other important monuments, such as the Belem Tower and Monument to the Discoveries. 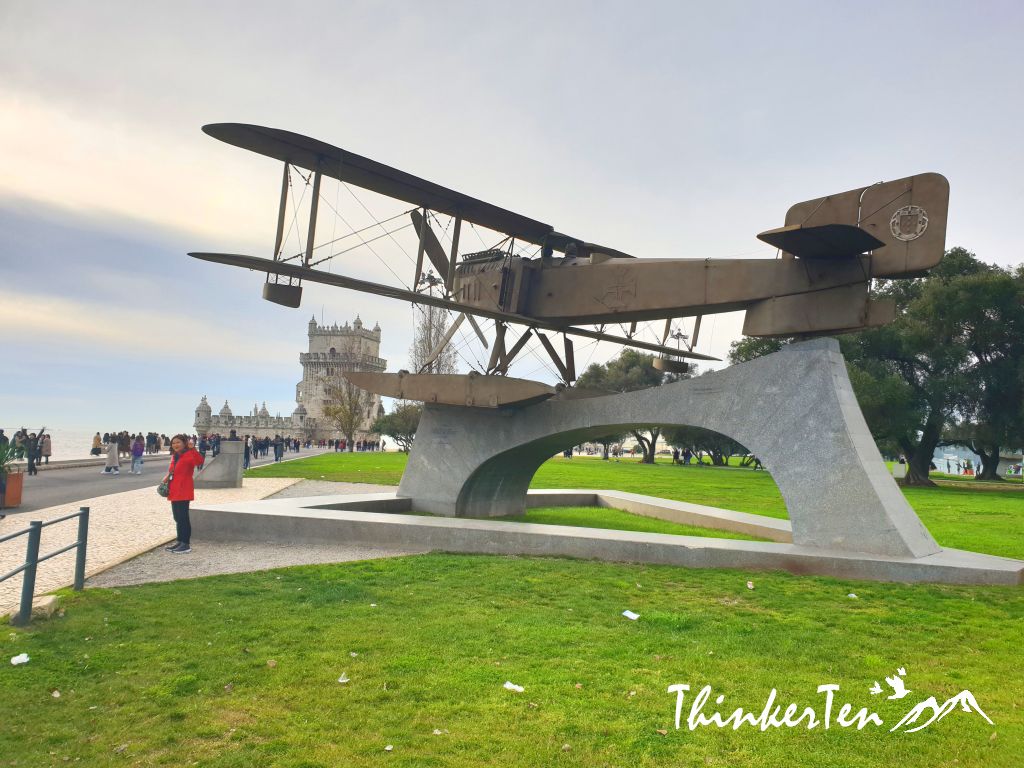 Belem Tower is one of the iconic landmarks in Belem Neighborhood of Lisbon. The historical tower is built on the Tagus River, in case you are not familiar with Tagus River, it is once a major maritime port and also one of the important river in Portugal, also the longest in the Iberian Peninsula, it flows between Portugal and Spain. 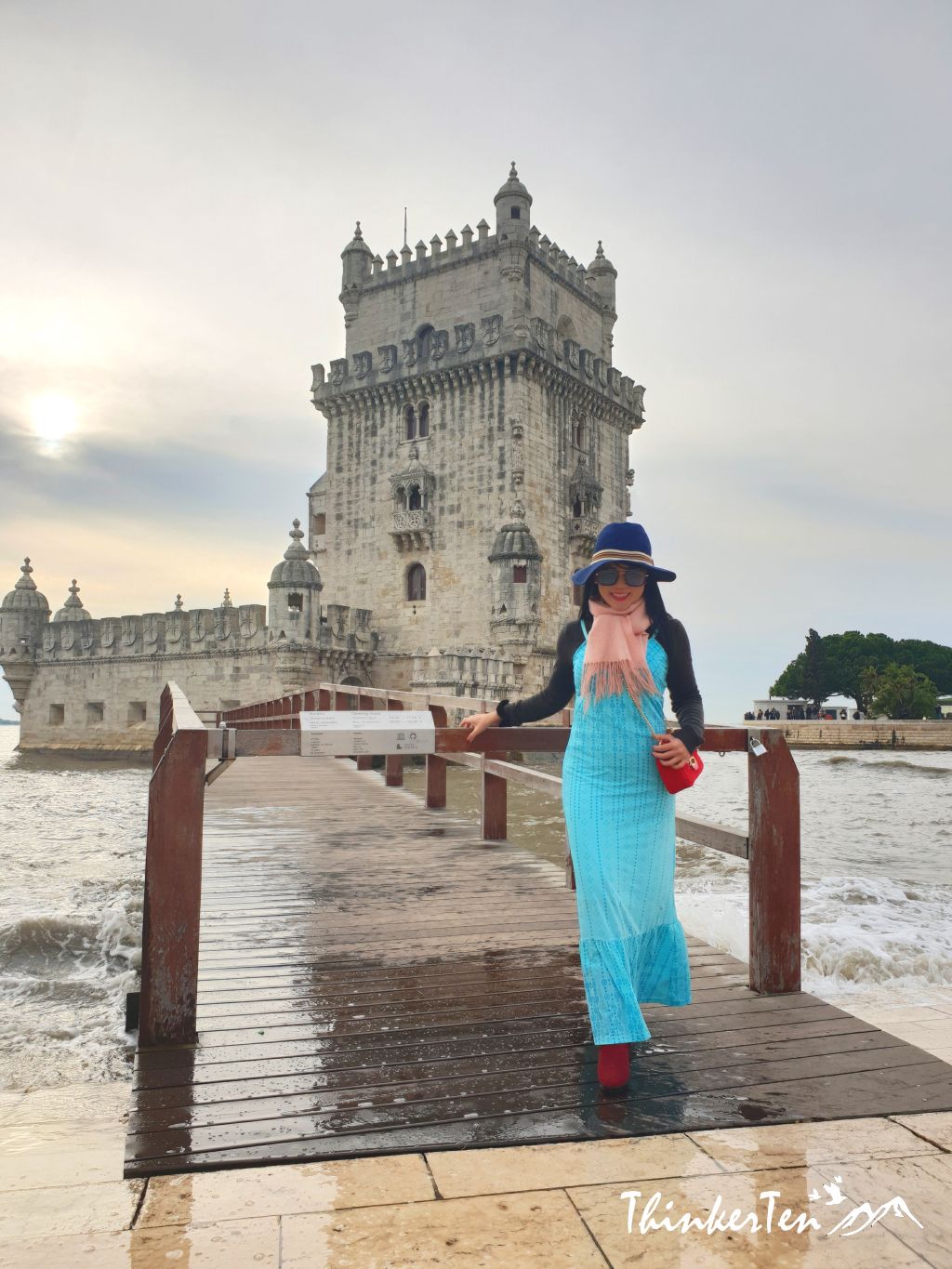 A Lighthouse then Defence Fortress

Belem Tower is also known as Tower of St Vincent; it was built in the early 16th century with Portuguese Manueline architectural style which includes sea elements in the decoration. Originally it was used as a lighthouse but then used as a defence fortress on the orders of King Manuel I (The King who asked to build Jeronminos Monastery).

You can purchase the ticket (Adult Euro 6.00) to go in the Belem Tower but the queue to go up is very long because there is only single way up and down and the stair are super narrow (only can fit one person at a time). You can imagine the crowd if I tell you the number of tourists visited Belem Tower is about 500,000 yearly.

At the top of the tower, you are able to see the view overlooking the Belem neighborhood and River Tagus. it is better to get your ticket online that way you can save time. Even if you are not planning to go up the tower, the view is still as lovely from the outside. 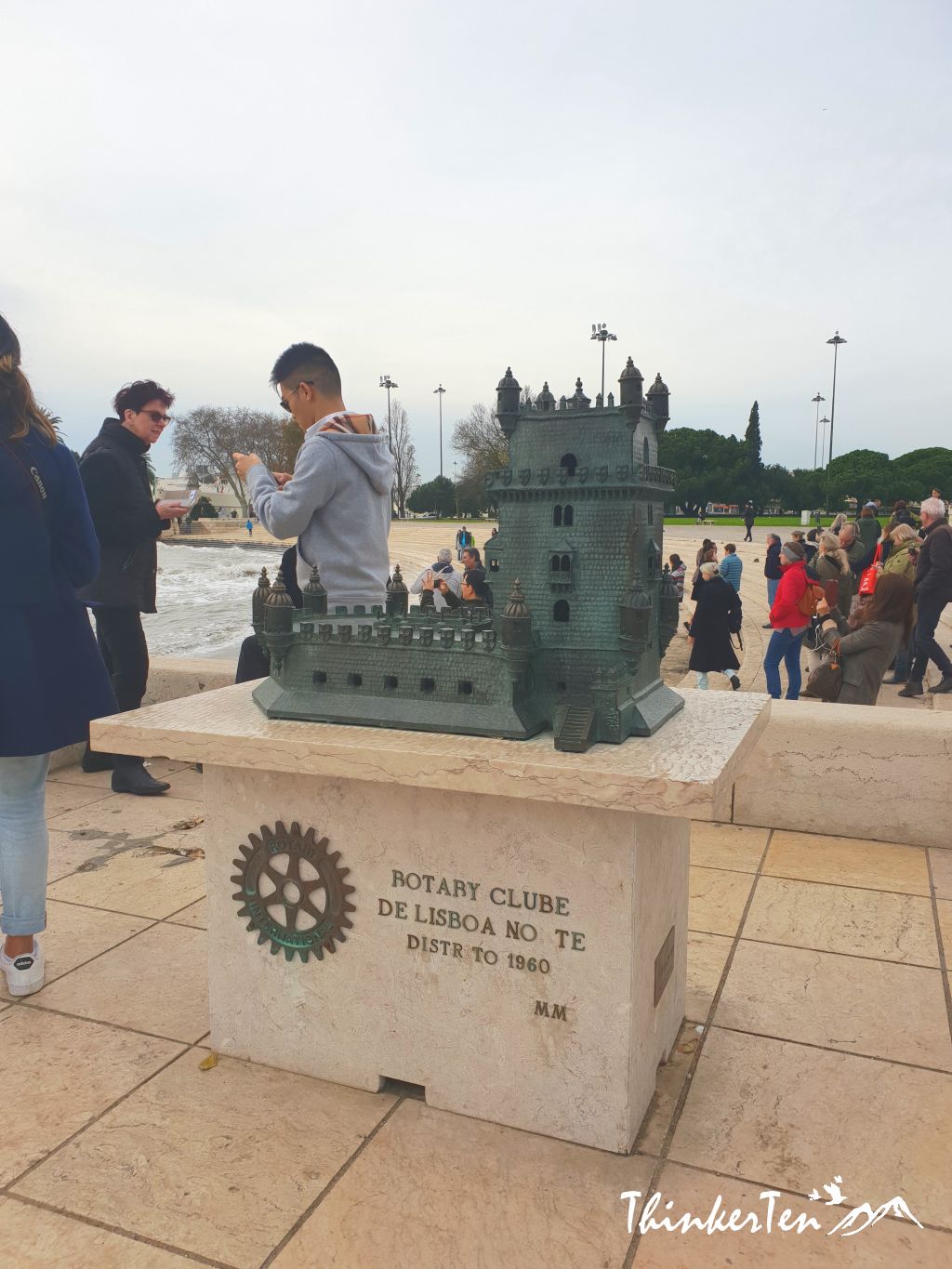 The other side of Belem Tower, you will notice an imitation of Golden Gate Bridge but the suspension bridge is actually called 25 de Abril Bridge. It looks very similar to the Golden Gate Bridge in San Francisco CA USA. The Ponte 25 de Abril suspension bridge connects Lisbon on the north bank and Alameda on the south bank. It looks almost identical comparing their designs and colors used.

Sanctuary of Christ the King 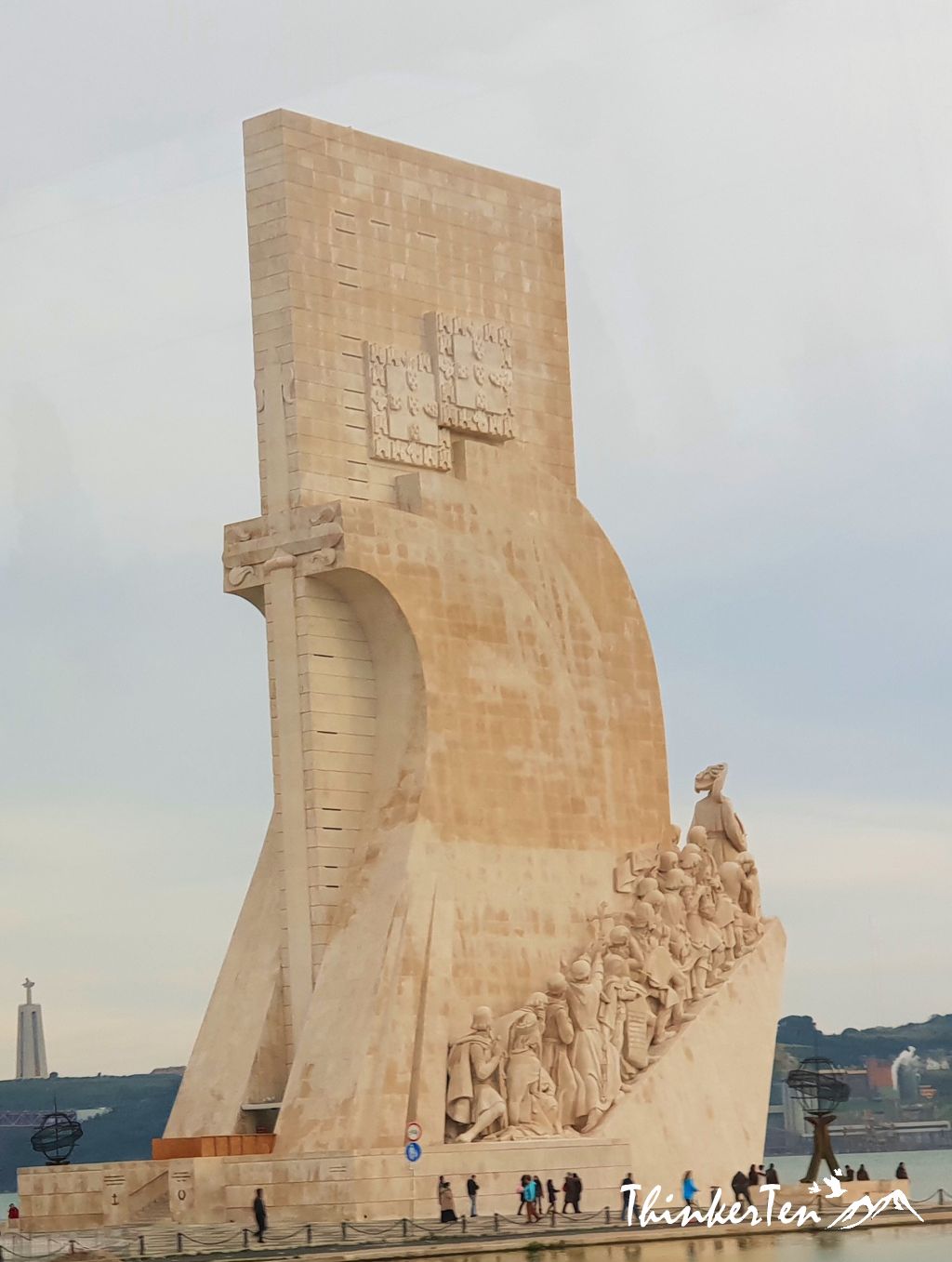 This monument is also located on the banks of the River Tagus, not very far the Belem Tower. The structure is pretty amazing, it is huge and it was built to remember the explorers who helped establish Portugal as a 14th-century superpower. The design of the monument represents the prow of a ship if you see it from the banks of the Tagus River but appear as Latin cross when you see it from the rear of the monument. 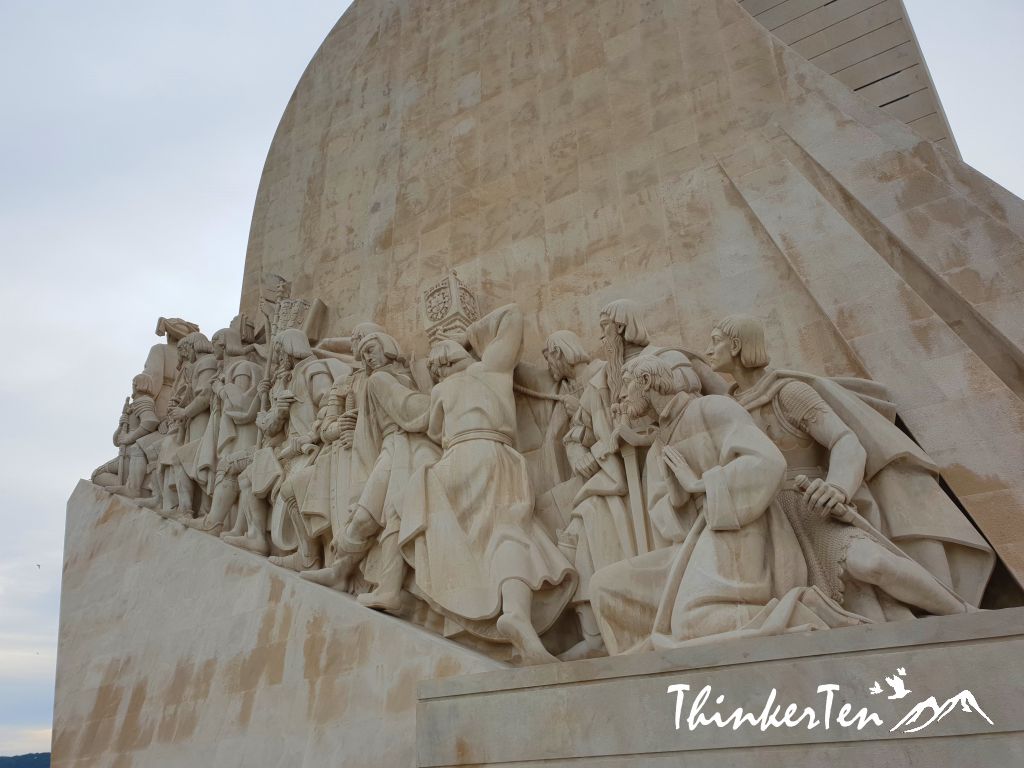 Heroes of the Portuguese Discoveries

Each side of this monument, they are heroes of the Portuguese Discoveries and the figures who are in all profession, such as sea explorers who discovered Brazil, renowned poets, painters, mathematicians, kings and many more.  This is the proudest monument for the entire Portuguese nation as it shows many achievements done through sea activities.  Can you imagine a small country like Portugal was able to conquer so many countries back then? 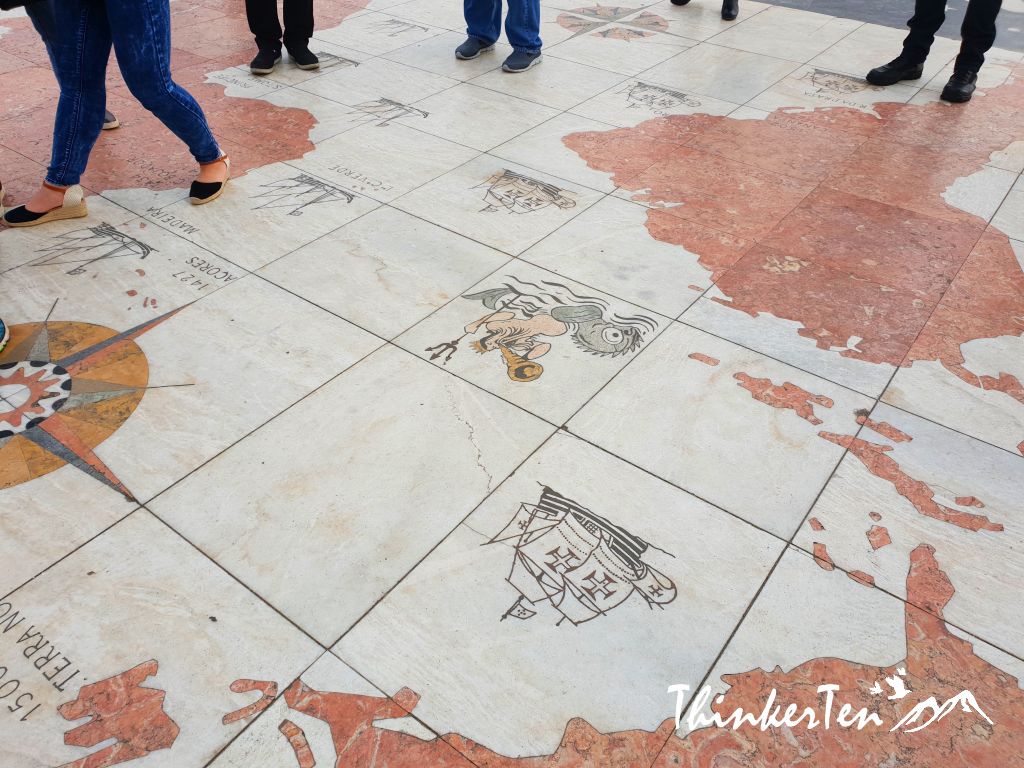 World map in a Compass

There is a Compass Rose which can be best seen as a whole picture if you are at the top of the monument (Entry to the monument is €5). The compass is drawn on the ground, inside there is a world map, showing the Portuguese pride, the countries that Portuguese has conquered are all named in the map. I spotted some countries in Asia, such as Macau and Malacca. 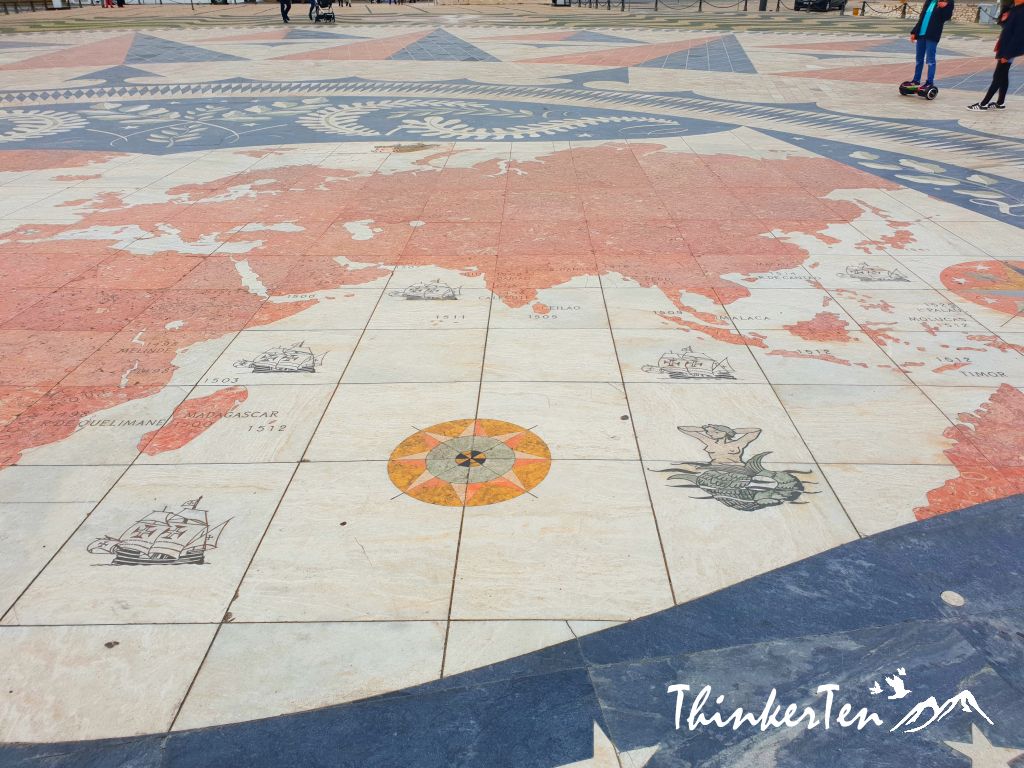 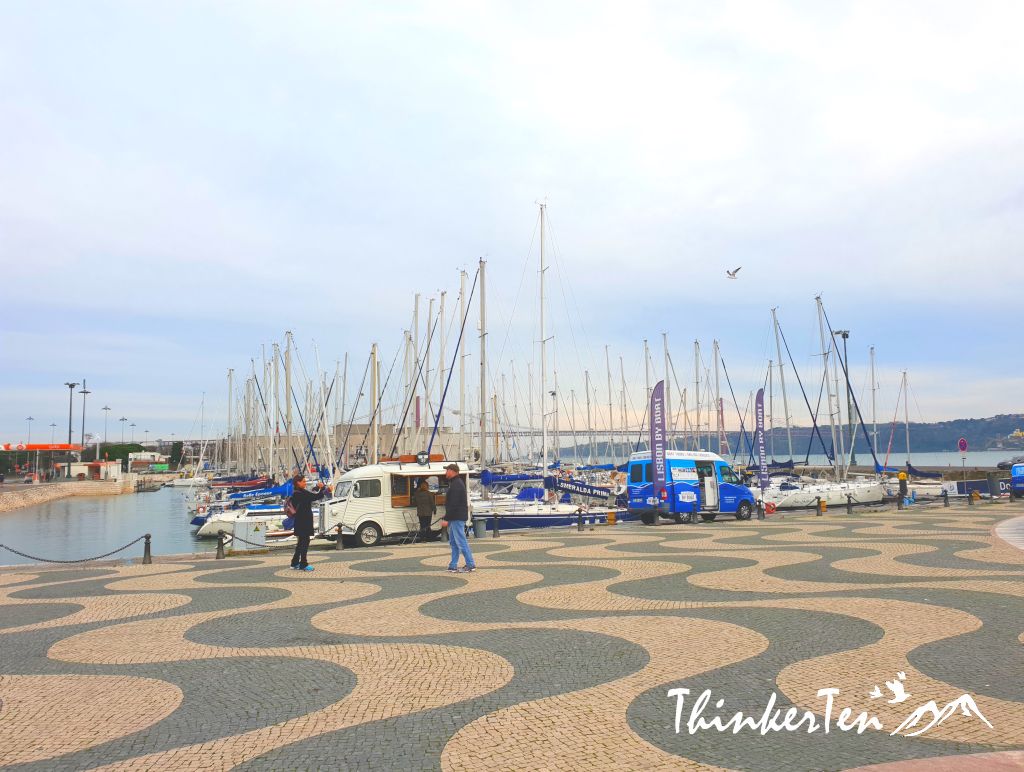 Tuk-tuk so popular and it can be seen in most of the tourist sites in Lisbon.  They are cute and easy to get around the steep and narrow streets of Lisbon.  It is about  €45-70 for one hour tour for up to six people.  If you are lucky, you get a really fun tour guide driver to tell you the history and hidden gems in Lisbon. 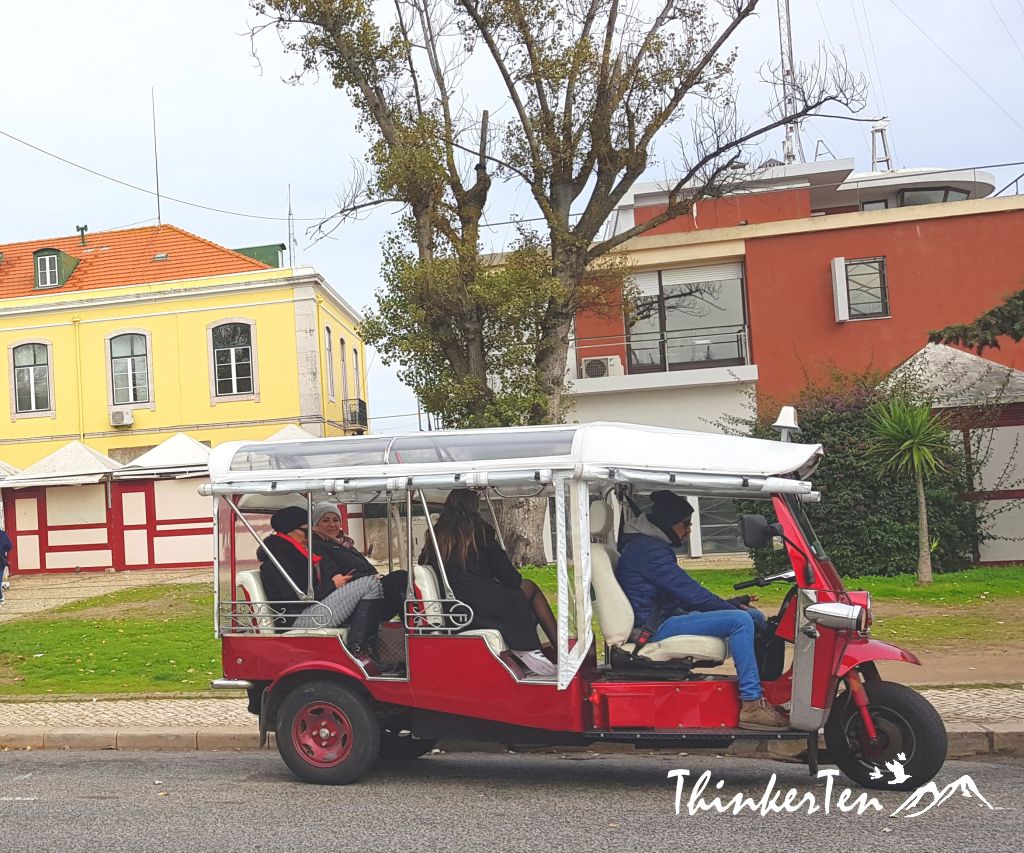 A stroll in the bank of Tagus River was a very educational tour for me.  I got to learn about Portuguese sea power and some imitation such as of Golden Gate Bridge, San Francisco and Christ the Redeemer statue, Rio De Janeiro. 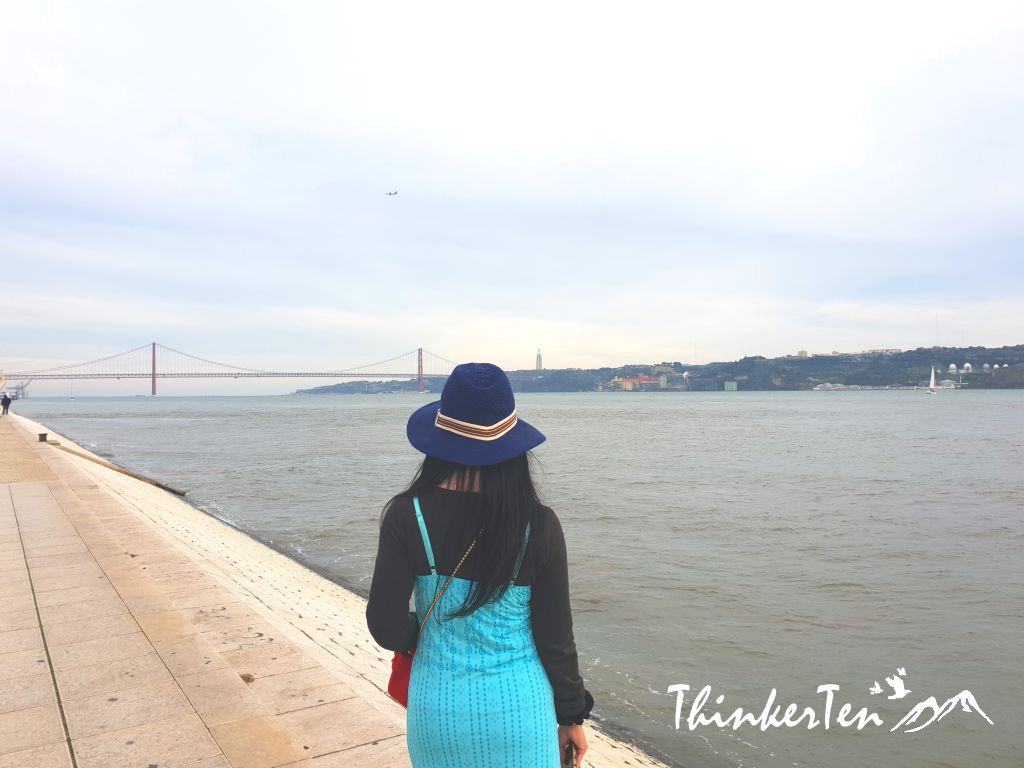 Portugal : The Fantastic World of the Portuguese Sardines for Lisbon Tourists!

Thank you for taking me back to my visit to Lisboa in 2007; I visited all but one of these sights. Lisboa was my first time in Europe and I have such fond memories!

I have visited some European countries and Lisbon is one of the interesting ones.

I was in Lisbon around this time last year, such a beautiful city but unfortunately we missed the Belem Tower! Next trip for sure. Thanks a lot.

Thanks for sharing this nice post on your experience in Lisbon, which is one of my favorite destinations.

Lisbon is one of my favorite destination too. I find there are shoppings for all level, expensive to mid and low range. Pretty fun.

I’d definitely want to visit the Belem Tower and the Tagus River should I ever get the chance to go to Lisbon. It sounds like you had a very interesting visit.

The Tagus River is one of the important river in Spain and Portugal.

Wow beautiful places and yes thanks to your post I know about this place. It’s now in NY bucket list.

This is gorgeous! That monument is jaw-dropping. Thank you so much for sharing!

The Belem Tower used Manueline architectural style to built and look carefully you are able to spot many ornaments which have sea elements. It is one of the Portuguese rich and lavish style of architectural.

The photos are so lovely, I would really love to visit Lisbon one day. The River Tagus and Belem Tower is really beautiful.

wow…what a fun trip. Lots of things to learn about and in a fun way.

Your post has made me want to visit Portugal! It sounds like a really fun trip and has definitely been added to my bucket list so thank you for sharing!

I’d love to explore Lisbon one day. Your pictures are beautiful. And babe your blue dress is so beautiful.

Wow so many beautiful shots in Portugal. Lisbon is so interesting.

Lisbon is so beautiful. i’d love to visit one day