The good thing about renting a car in Sydney is we get to explore the Blue Mountain, situated in the west of Sydney. When you explore the Sydney city, it is always good to use the public transport like train, tram, and buses but when you want to do Blue Mountain, is good to drive 50 km west of Sydney CBD, about an hour drive.  Alternatively, you may want to get a day tour from Klook which include hotel pick up from Sydney and food. 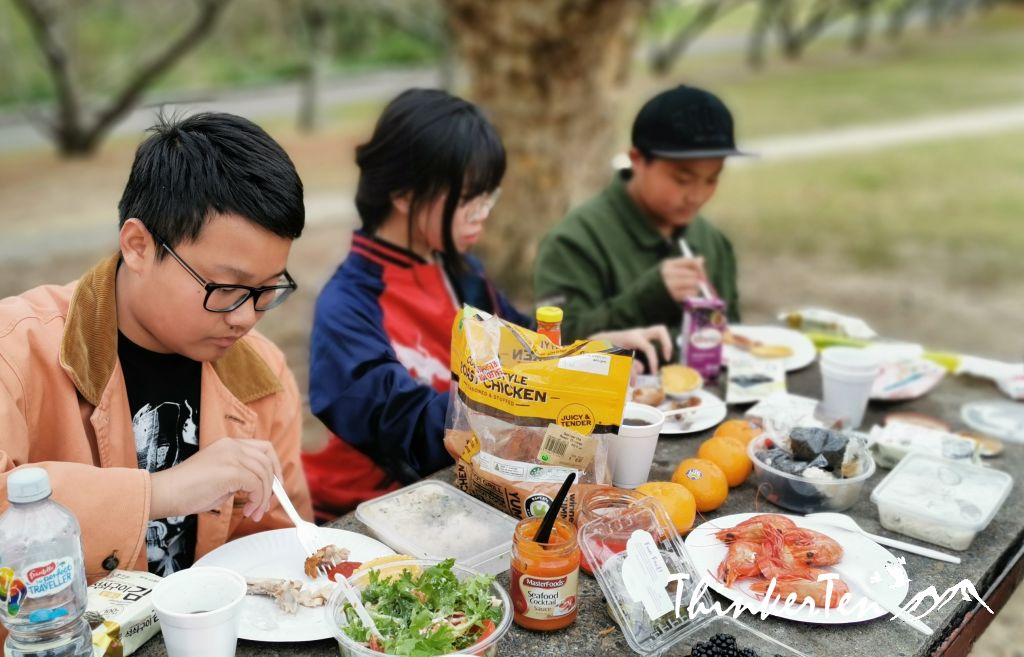 Before we depart for Blue Mountain, we went into the local supermarkets in Sydney, can be Coles, Worthworth or Aldi to get some food for the picnic. If you lived near Sydney Chinatown, you can always get some nice restaurant cooked food from the hawker’s centers. We have gotten a roasted chicken, some huge prawns, salad, cokes, water, fruits. Don’t forget to get the seafood cocktail sauce and chili sauce for dipping with the prawn.

We left Sydney at about 10 plus in the morning and arrived in the Blue Mountain at around 11 plus, almost 12 pm.  Just the right timing for lunch. 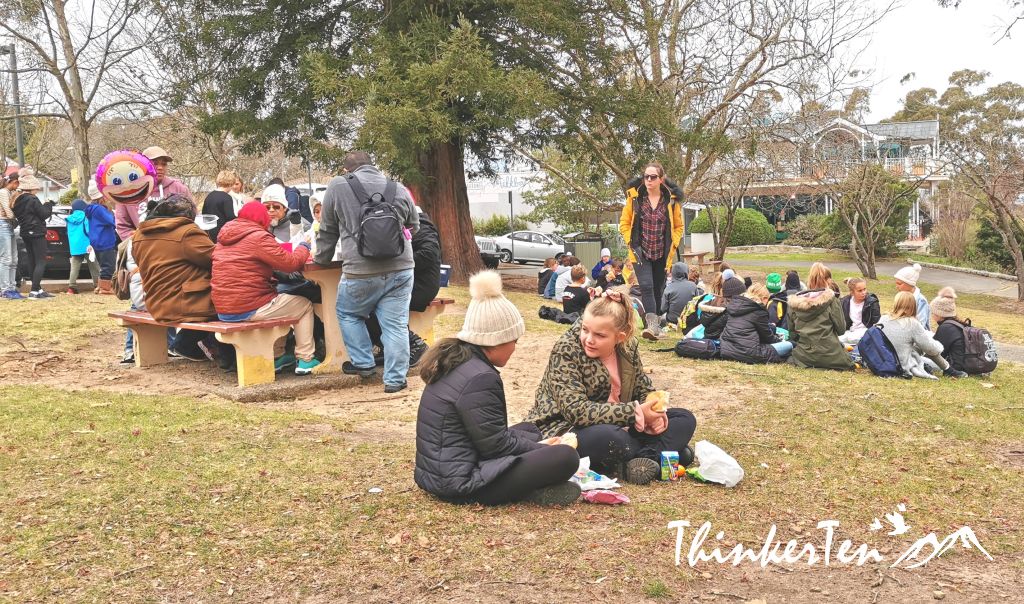 There are a number of lookout point for Blue Mountain but people usually go for the most famous lookout point, called Three Sisters, Echo Point. You will see the unusual rock formation by land erosion of the Three Sister, the three rock pillars stand towering the Jamison valley are named Meehni(922m), Wimlah(918m), and Gunnedoo (906m). According to legend, the three sisters living in Jamison Valley are members of the Katoomba tribe and fell in love with three men from other tribes, called Napean tribe. Intermarriage between the Katoomba and Nepean was not allowed and so the three men caused a major tribal battle. A Katoomba elder and medicine man then turned the women into stones in order to protect them from a fierce battle. He promised to turn the three women back after the battle but he was killed instead. Hence the three sisters petrified until today. Obviously, this is just a made-up story which was told by the aboriginal generations. However, the legend was not made up by an Aboriginal but by a Katoomba local, Mel Ward.  This guy certainly has lots of imagination.

There are about 11 lookouts or more in the Blue Mountain area.

Other lookouts are the Lincoln Rock, Pulpit Rock, Govetts Leap, Wentworth Falls, Evans Lookout and Castle Head Rock. If you have extra time to spend hiking, these are the great lookout points. 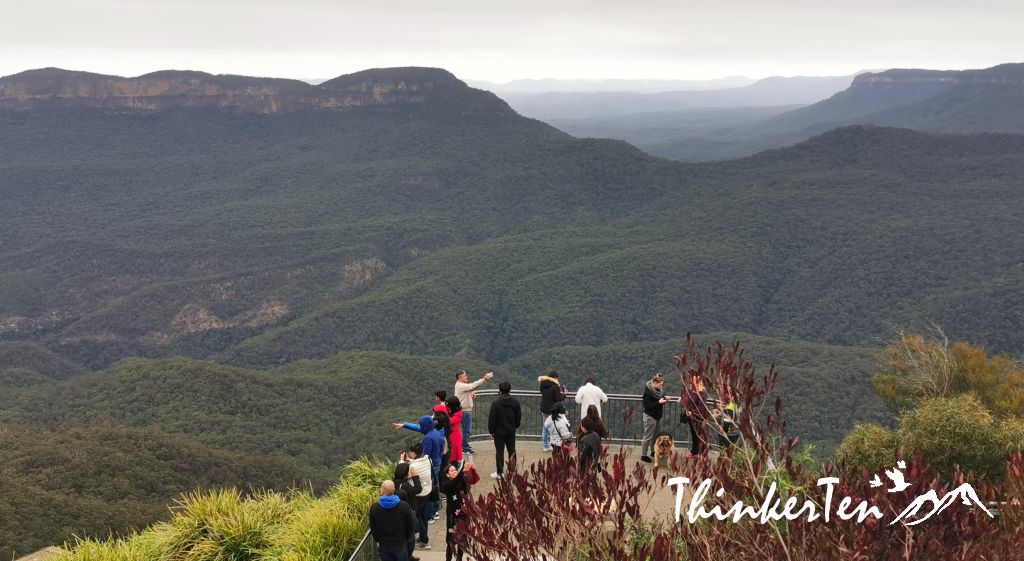 Why named the Blue Mountains?

Well, you may guess it, due to the blue haze and look blue.

If you see other canyons in the world, such as the Grand Canyon in America and  Zhangye Danxia Mountain in China, then the Blue Mountain may not be the most impressive one but the Three Sisters rock formation still pretty unique and stands out as the iconic landmark in Australia.

What is the best time to explore Blue Mountain?

You can visit Blue Mountain all year round, summer will be hot so wear shorts and loose pants and comfy shoes, In winter, wear layers and bring a jacket up in case it is windy.  A hat is always helpful to stop your messy hair. In winter, snowfall is possible but very unlikely and to be frank, very rare. 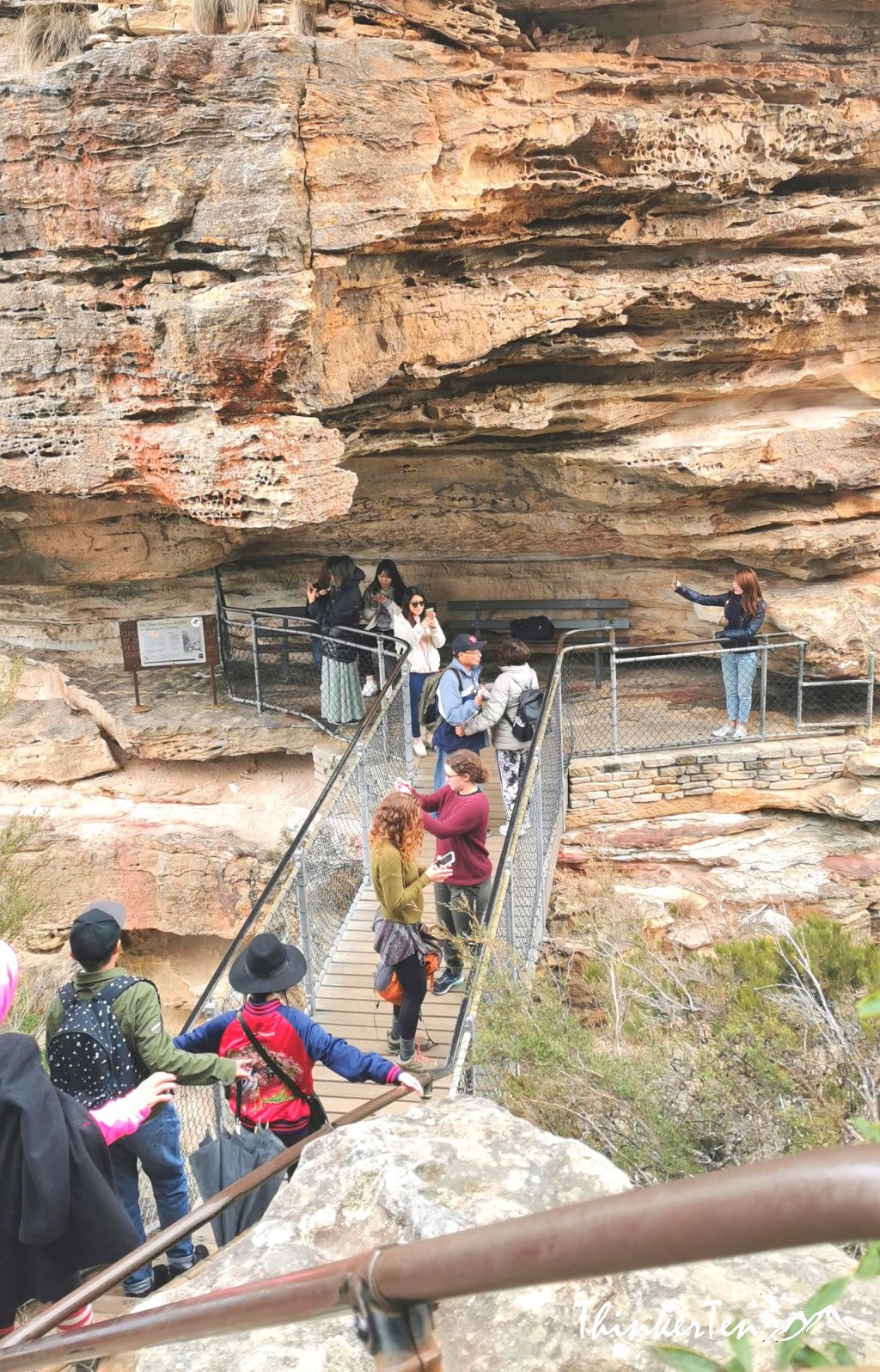 Katoomba is the most visited town in the Blue Mountain. The name is from the Aboriginal term meaning “falling water tumbling over a hill” and takes its name from a waterfall that drops into the Jamison Valley in the region. Katoomba is one of the bigger suburbs in the Blue Mountains and has major scenic attractions. There are also several eating places in Katoomba, near the station. 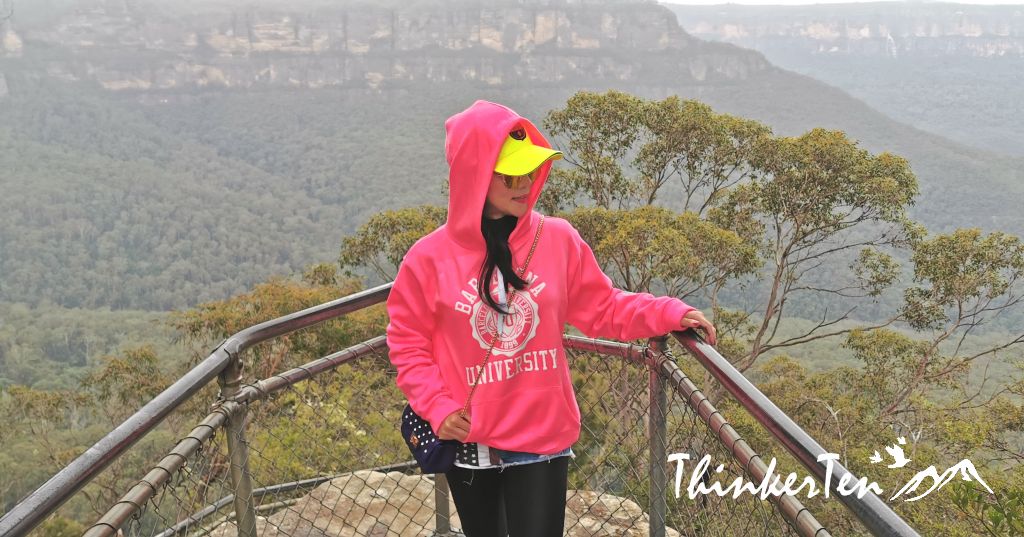 The scenic World Blue Mountain is the man-made attraction which has 3 experiences:

The Scenic Railway – A railway with the steepest incline at 52 degrees, originally the railway was built as a way to bring coal from the Katoomba coal mine on the valley floor.

The Scenic Cableway – The cable car is the steepest aerial cable car in the Southern Hemisphere. 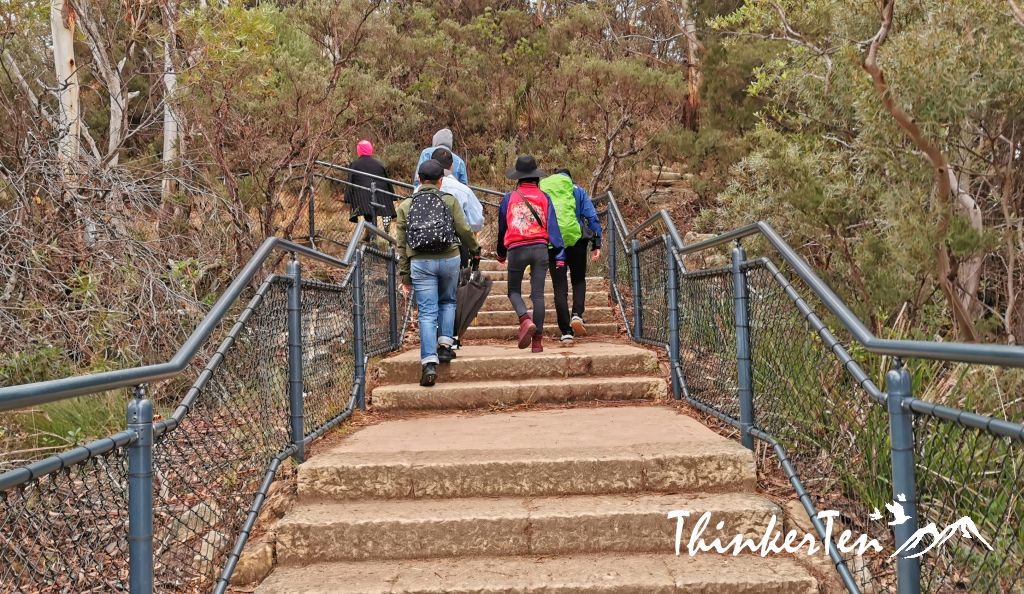 Blue Mountain can be done in a day, leave early from Sydney and prepare your picnics so that you don’t have to waste time to find the restaurants is my advice. 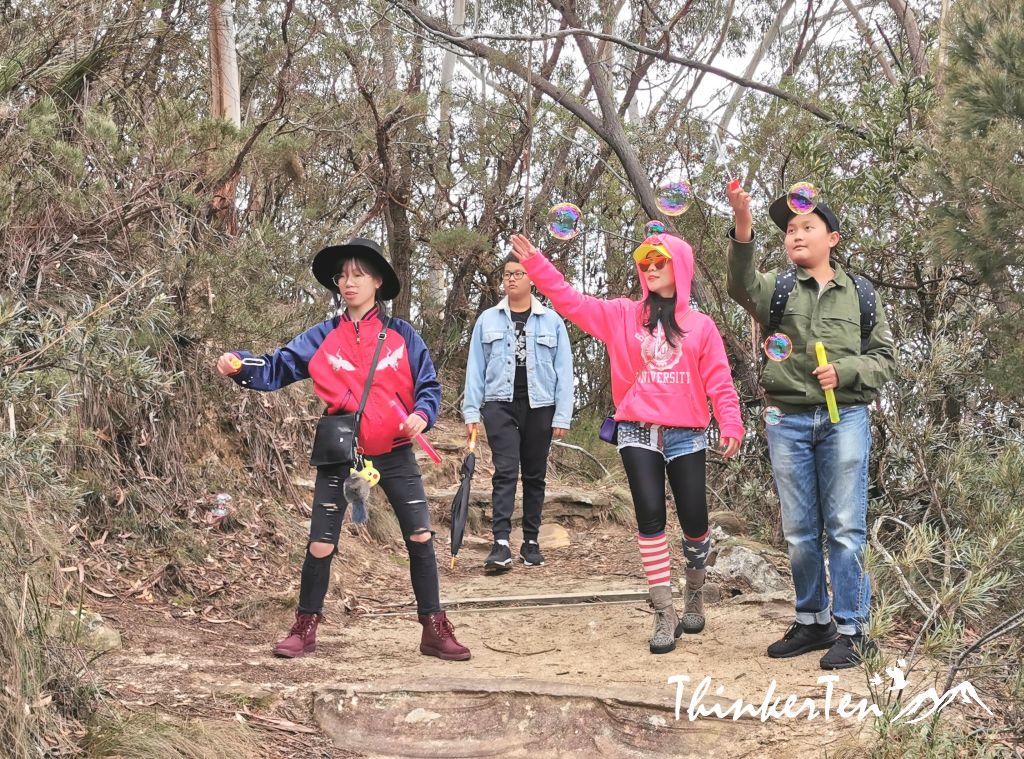 This sounds like such an amazing place to visit!

OMG I want to visit Austrailia so bad! Looks like an amazing time!

The Downunder has so much to offer, which is still quite different from American and UK.

That is such a gorgeous place. I’ve wanted to see Australia for years. I really hope I can get there one day.

Australia is great to visit all year round, even winter in June is still very nice to visit, no snow.

Wow these are some beautiful locations! I really need to travel to Australia soon! It looks absolutely stunning there and I haven’t even heard of these places!

I am sure you would love Blue Mountain and for travelers who like to hike, you may want to spend a day or two in Blue Mountain area so that you can explore more lookout point.

This is such a great travel guide to this area!

There are about 11 lookouts in the Blue Mountain area and Echo point is one of the most popular ones.

Australia has always been on my bucket list! That is such a beautiful place.Hopefully I will visit someday!

There are lots of nature in Australia, beaches, mountains and national parks are things you will see here.

Wow! The view is so stunning! I must go here really soon and experience all the fun and those wonderful scenery. Hope you had fun!

Thanks for your comment. The view in the Echo point is one of the best as you get to see the iconic Three Sisters’ Rock formation.

I came back from Blue Mountain a couple of days ago, gorgeous place.

What a fantastic place to visit! I loved the story behind it as well.Sounds like a wonderful way to spend the afternoon exploring.

you had blissful time and created wonderful memories. that is very important to create abundance in life.

lovely scenery! be nice to visit this one day

Such beautiful photos! This is completely and utterly spectacular!
I would love to travel here so much. Thanks for sharing

Loving all the suggested look our point and seems like you all had a blast there, thanks for your tips. Saving it for when we go to Australia

This looks like an amazing place to visit. I have bookmarked it for future reference! If I ever visit Sydney, your post will come handy ☺

Oh wow, what a spectacular place to visit. Australia is on my bucket list