Alhambra is a short form of the word “Calat Alhambra, the name given to a palace and fortress complex in Granada, Andalucia Spain. Your travel cannot be completed if you did not visit Alhambra in Granada Spain. It was designed as a military zone at the beginning, the Alhambra became the royal residence and court of Granada in the mid-13th century of the Moorish monarchs. 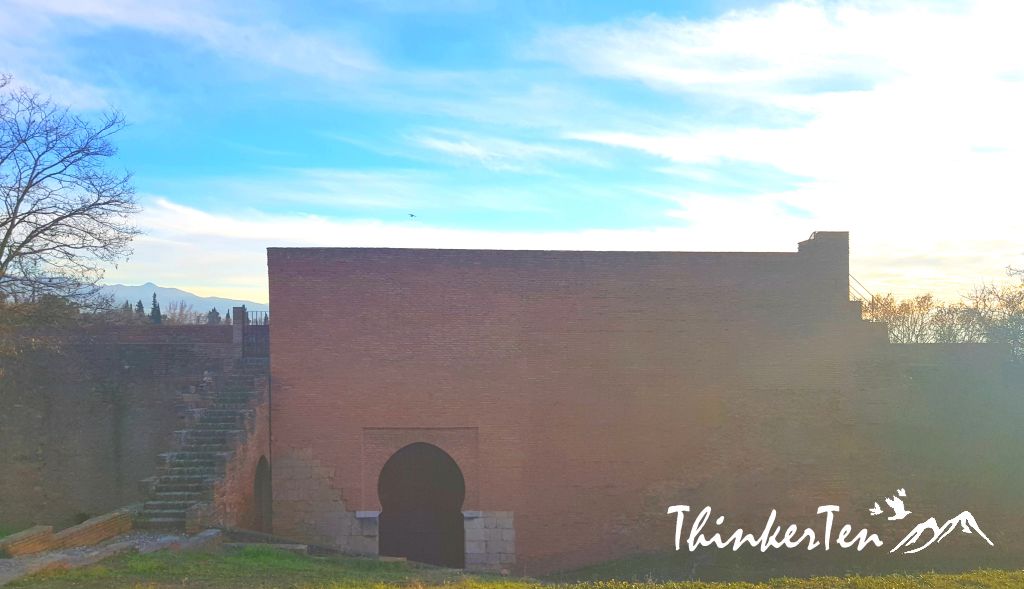 1. Get your ticket in advance

This place has 6,000 visitors per day so getting the ticket in advance is always a wise choice. You will notice your name printed out in the ticket too. Generally, people spend about 3-4 hours on the sites and you will have to walk for around 3 km or so in total. The best way to explore Alhambra is to have a local expert with in-depth knowledge of the fortress and garden. 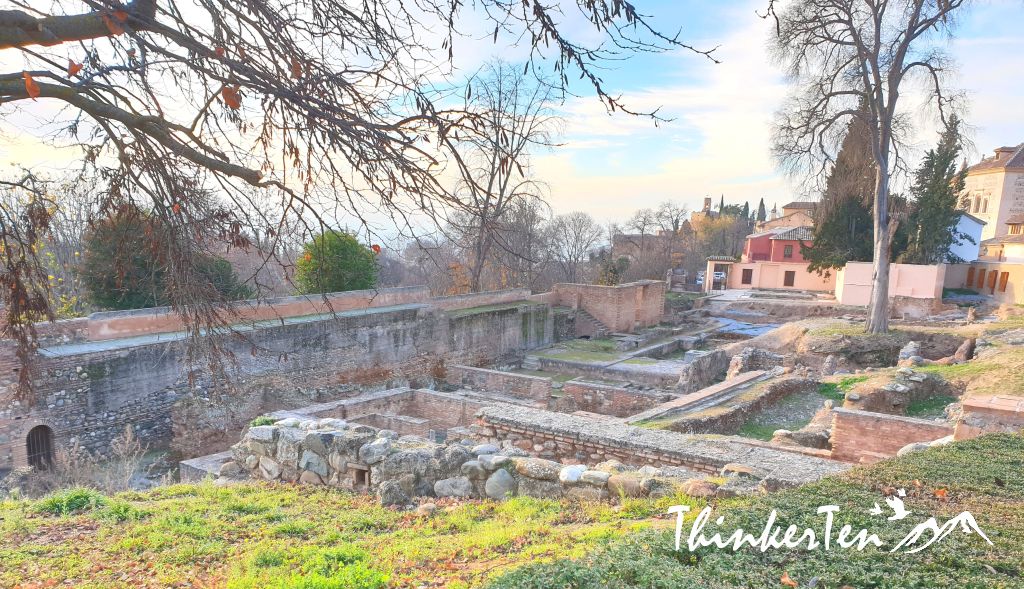 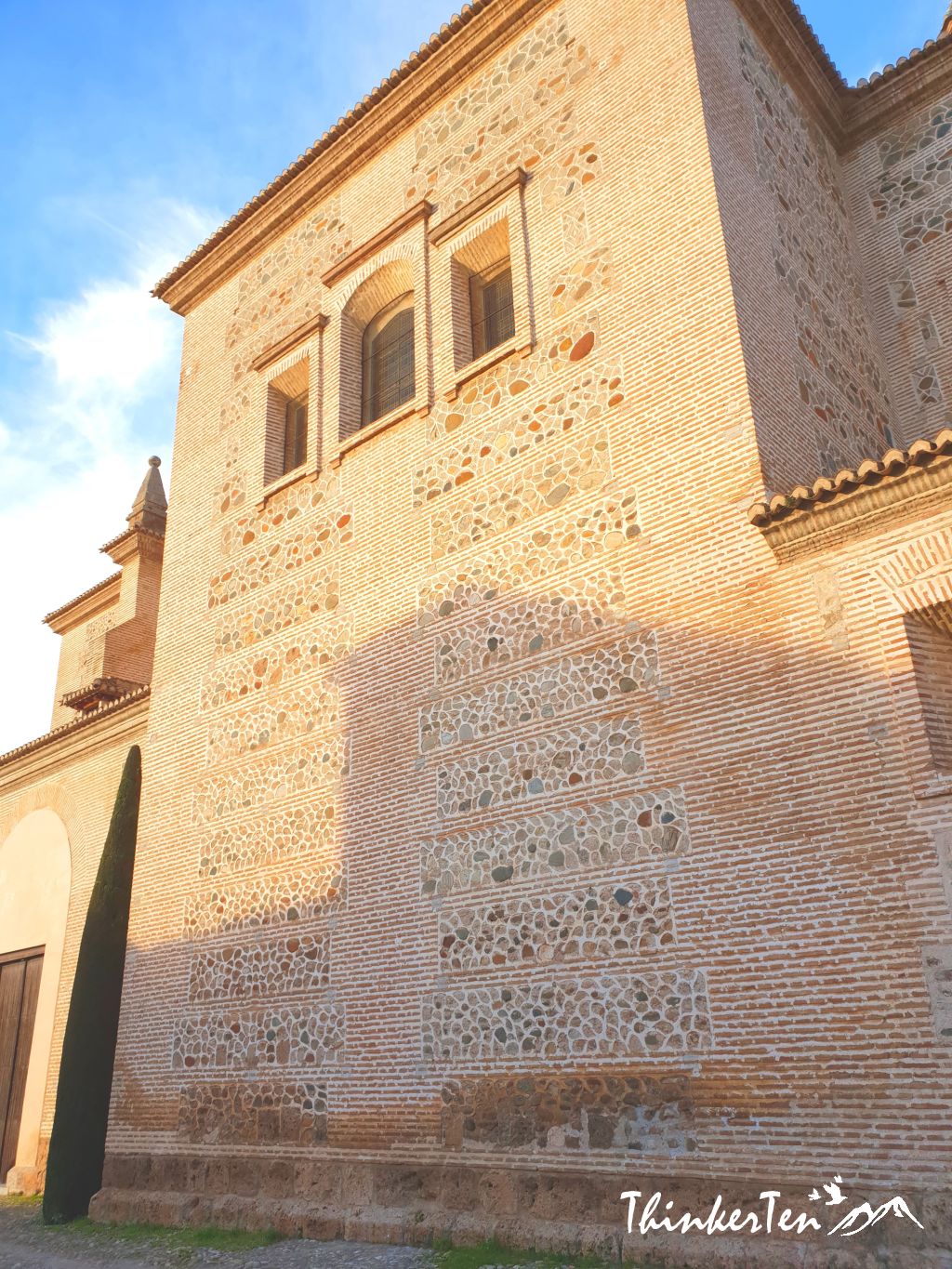 The first building you will see before you enter Alhambra is the Palace of Charles V, it has two museums inside. It is worth to pay a visit as your Alhambra ticket is also including this entrance.

King Carlos V wanted to have a Renaissance Palace near Alhambra Moorish fortress so he ordered Pedro Machuca, the architect from Toledo who has a strong love of the Renaissance style, also a student of Michelangelo in Rome. 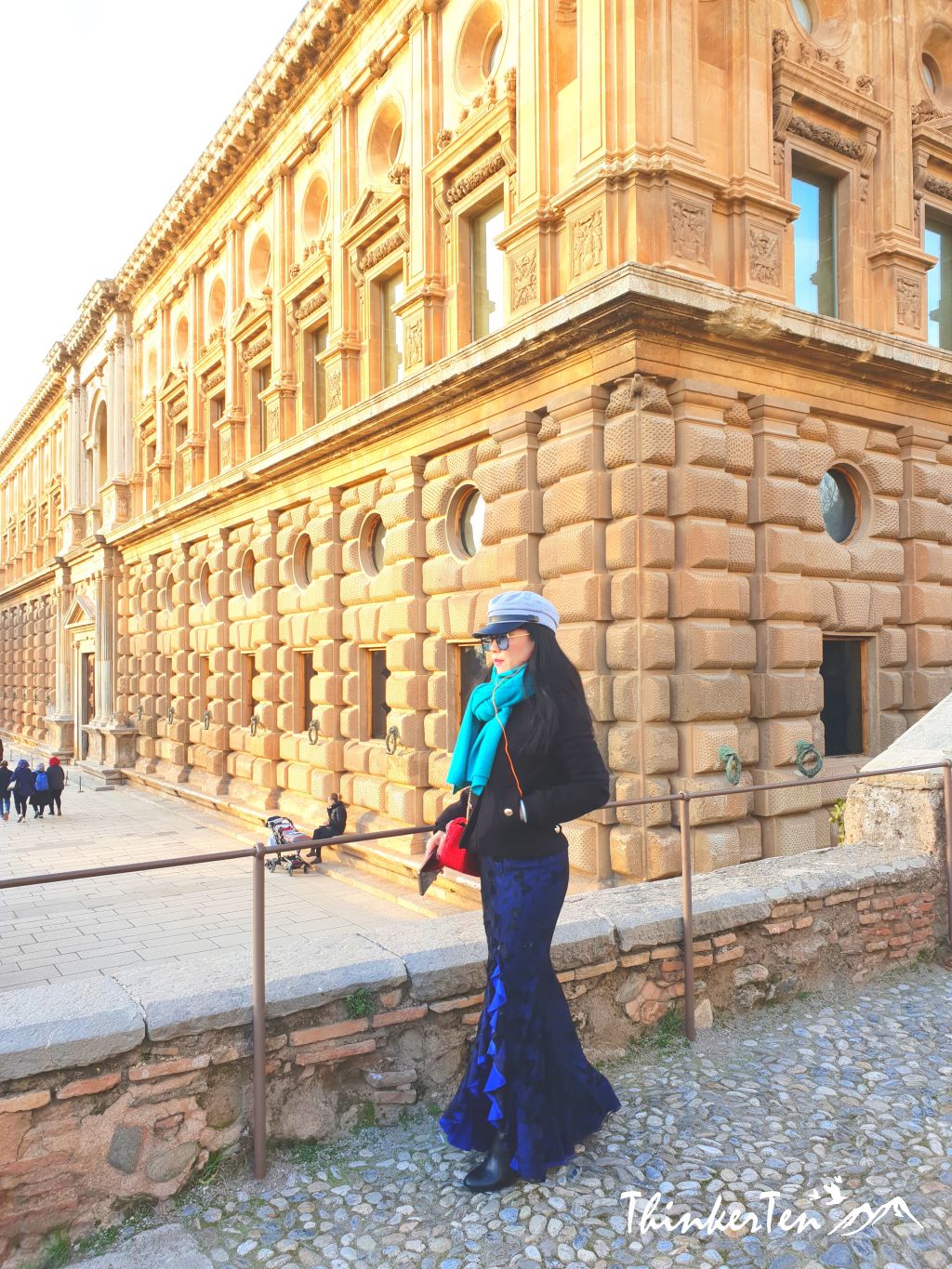 The Palace is one of the first Renaissance building created outside of Italy, modeled on Florence’s equally massive Palazzo Pitti.  The building is the cut-stone made, square shape and has a circular shaped courtyard in its interior. 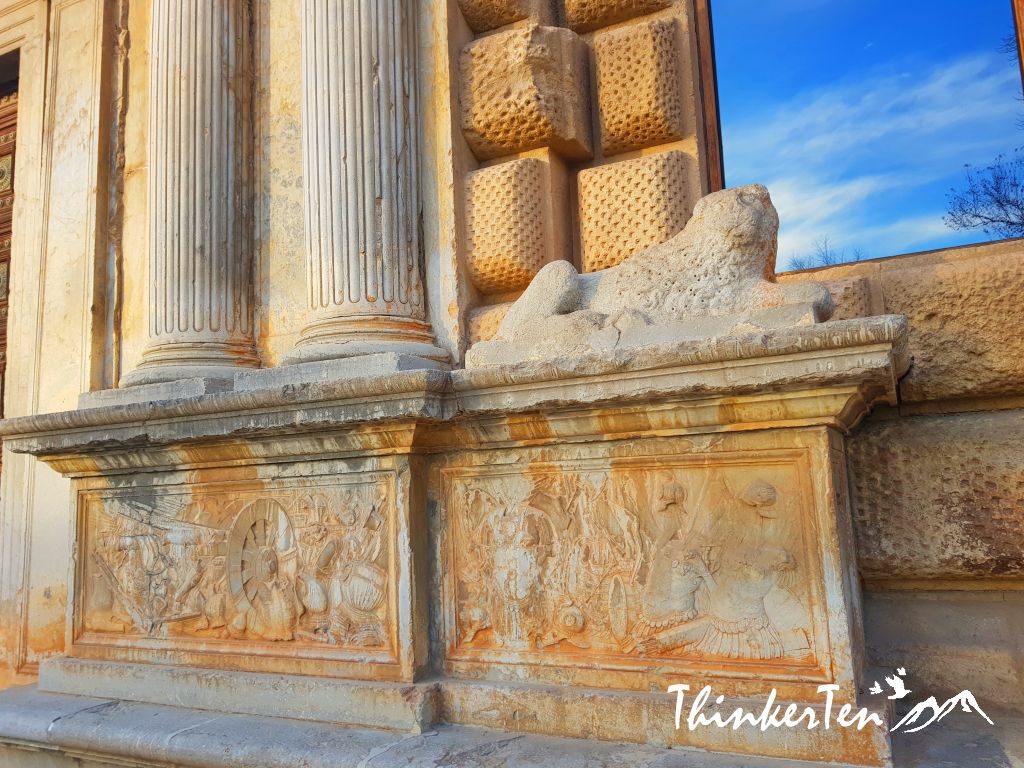 The Construction took more than 110 years to build due to many reasons, earthquakes, and lack of fund. In fact, it was abandoned and became a ruin for sometimes during the 18th century.  Finally, it gets restored and became a museum, hence no Spanish King ever live in this place before. 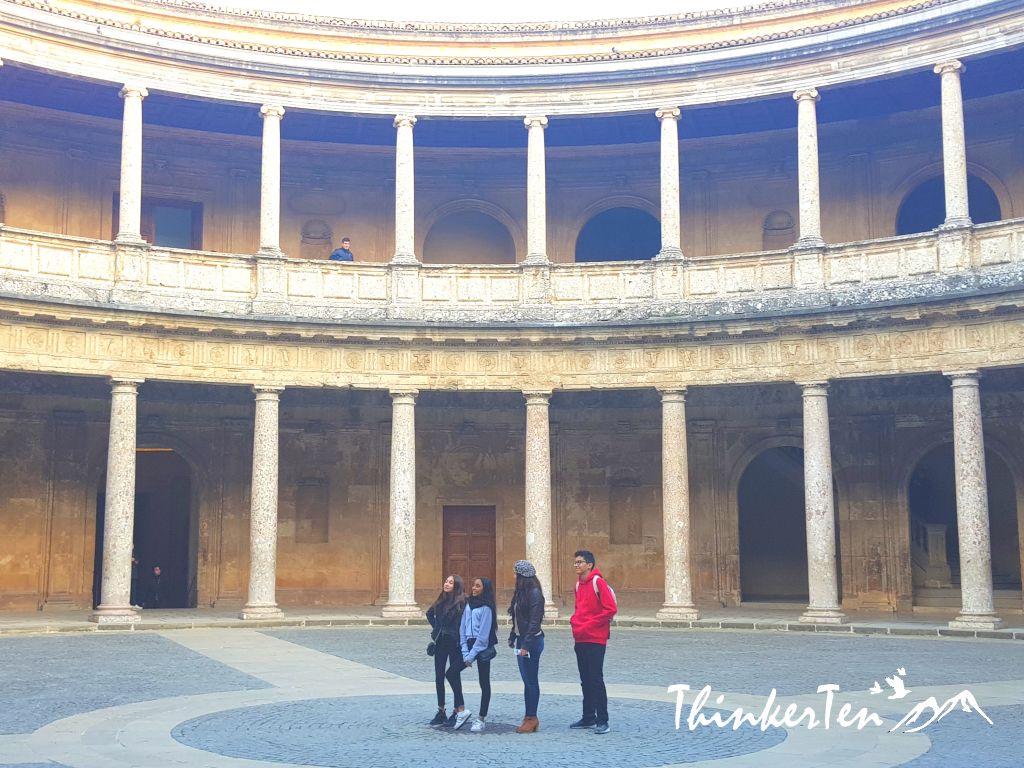 3. “Sierra Elvira” Stone Marble at the Palace of Carlos V

The central part of the two main facades is filled with stunning marble doorway. Marble from “Sierra Elvira” which was the most beautiful elements of Renaissance in Spain, widely used in the historical monument in the Andalucia region.

His full name is Carlos Quinto Charles the Fifth, grandson of Isabel and Ferdinand, who expelled the Moors, masterminded of the Inquisition, and financed Christopher Columbus voyages. He is the most powerful monarch in Europe.  Married to  Isabella of Portugal. 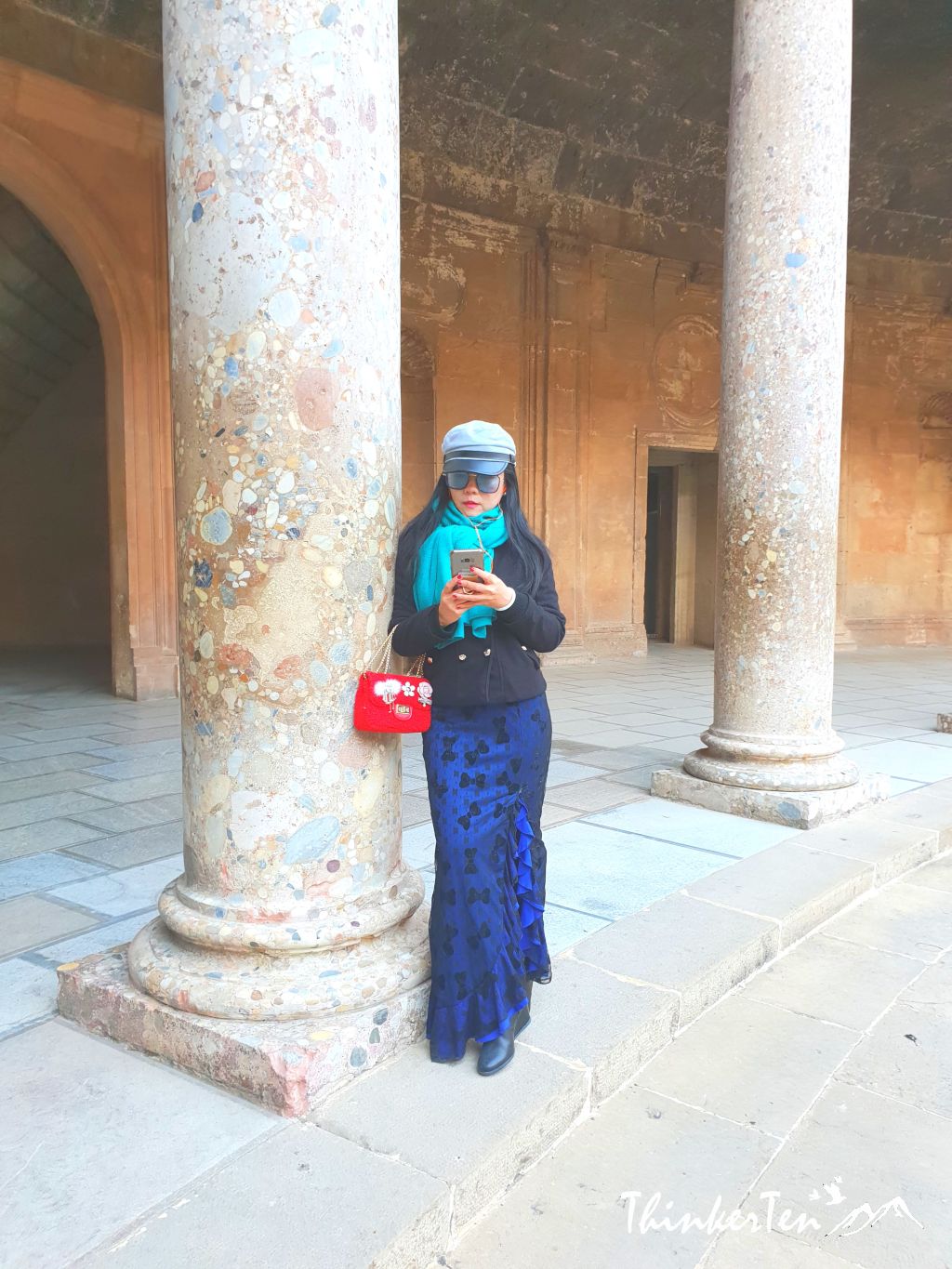 5. The view of Granada City

Alhambra is located on al-Sabika Hill which meaning giving view of the whole expansion of the city of Granada including the famous neighborhood -Albayzín!  And that is where we had our flamenco show at night at the cave house. 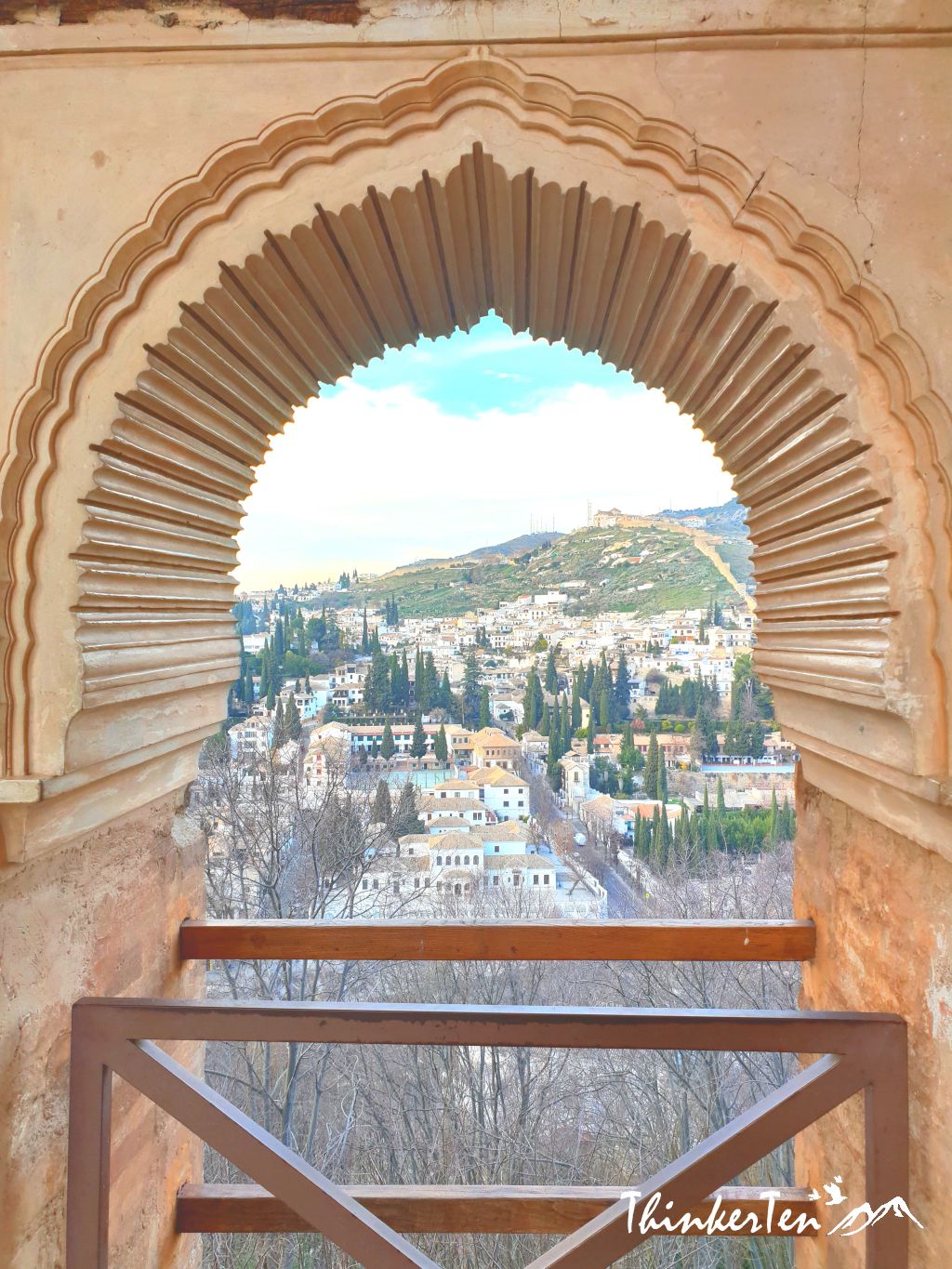 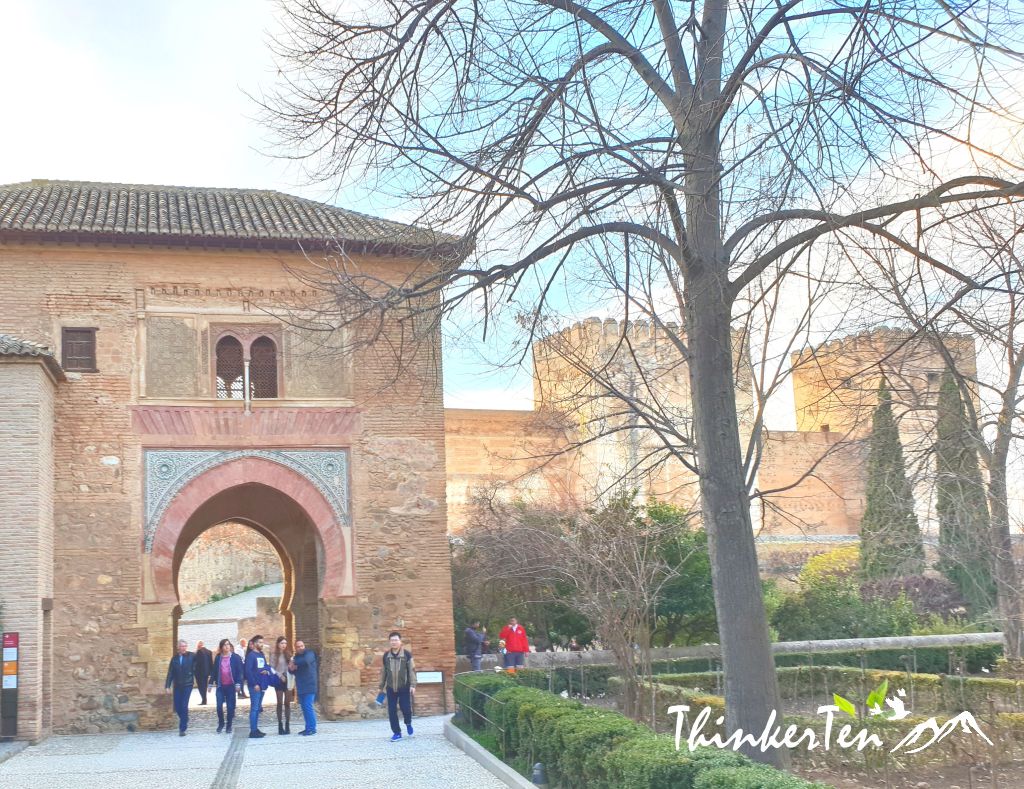 One thing you will notice when you enter Alhambra is the water system. Fountains, pools and a lot of other water features can be found along the way. 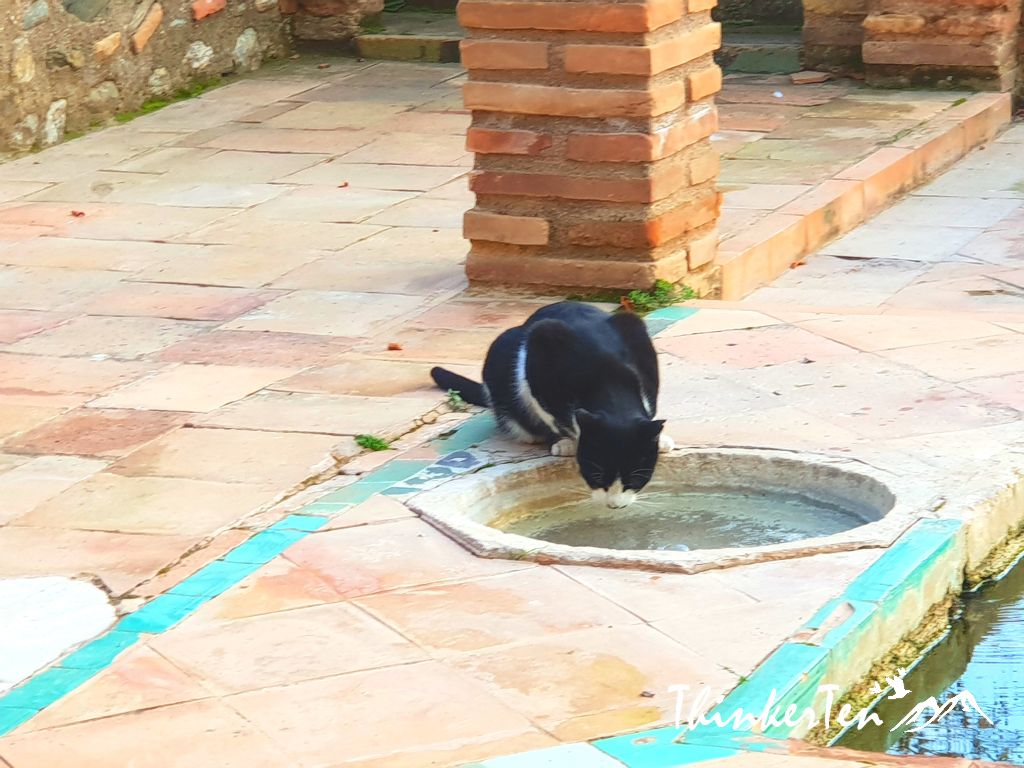 Water seems to be part of Alhambra, the sound of the flowing stream and fountain do make the whole place so serene and music to the ears. It also cools down the whole palace. 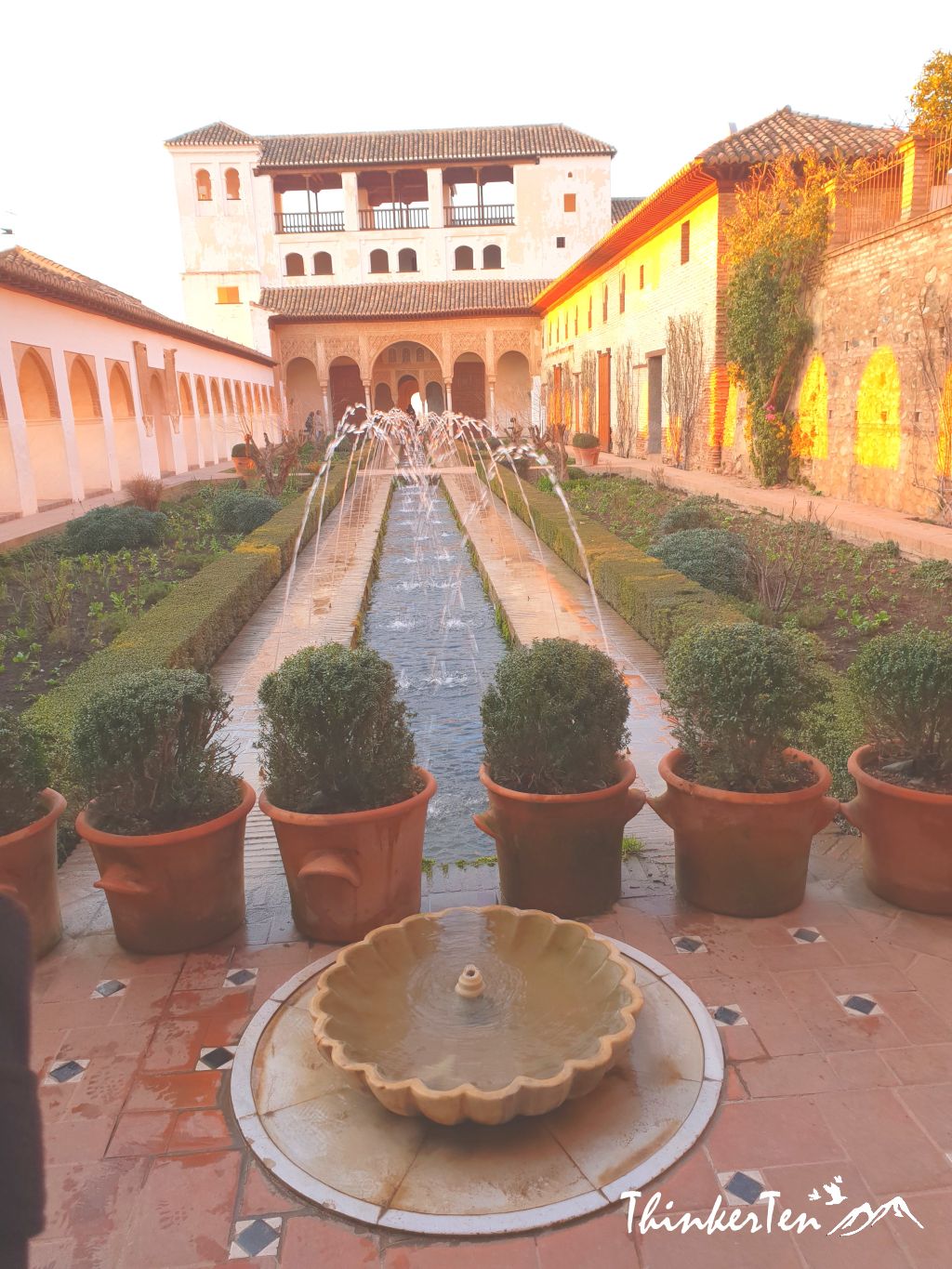 The Generalife is located on the hill of Cerro del Sol, became a leisure place for the kings of Granada when they wanted to get away from the official affairs of the palace. 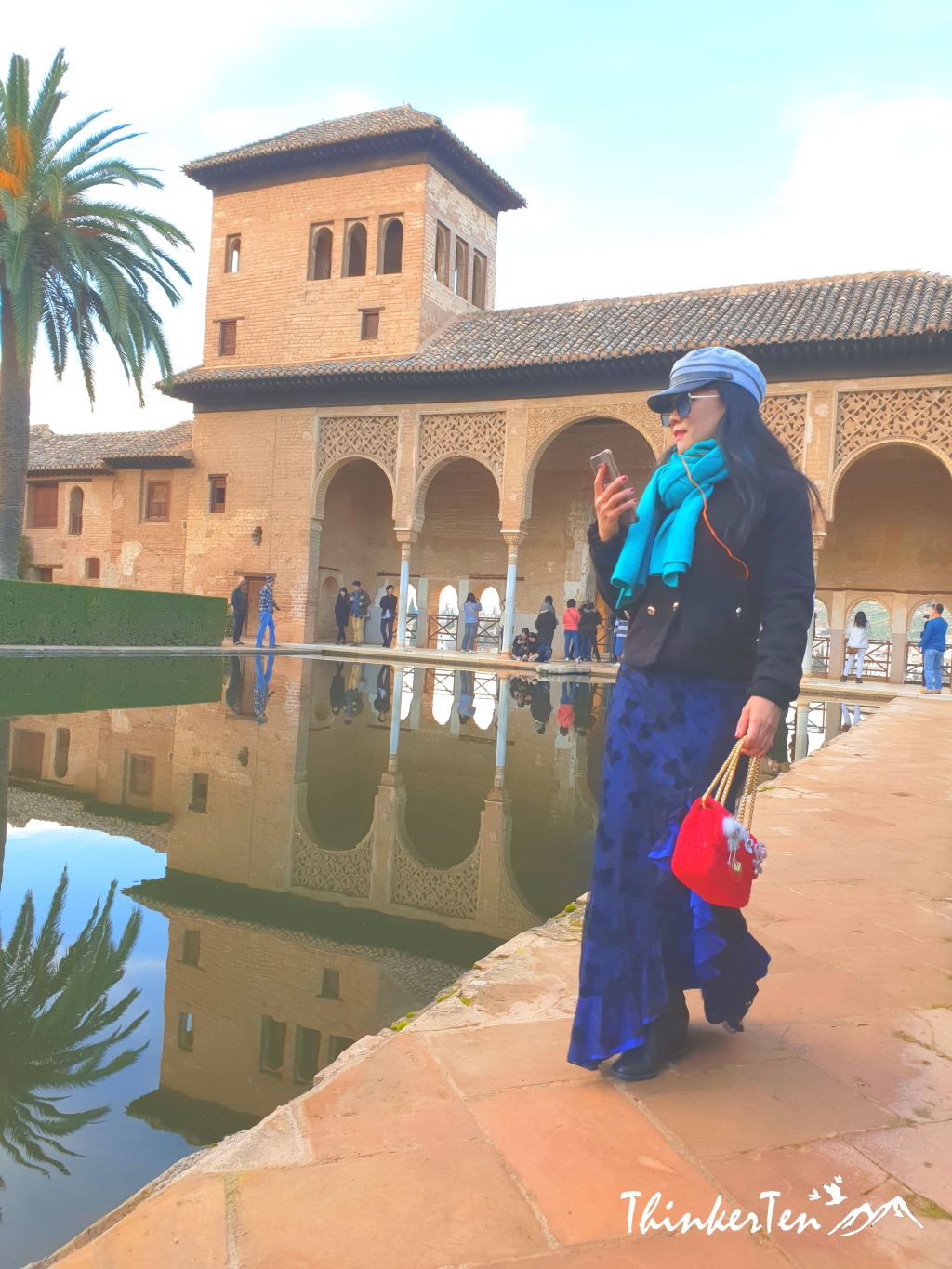 Generalife Palace and garden are separated from the rest of the Alhambra complex and it takes 20 mins walking through nice botanic gardens. Do search for the tall cypress trees in the garden. 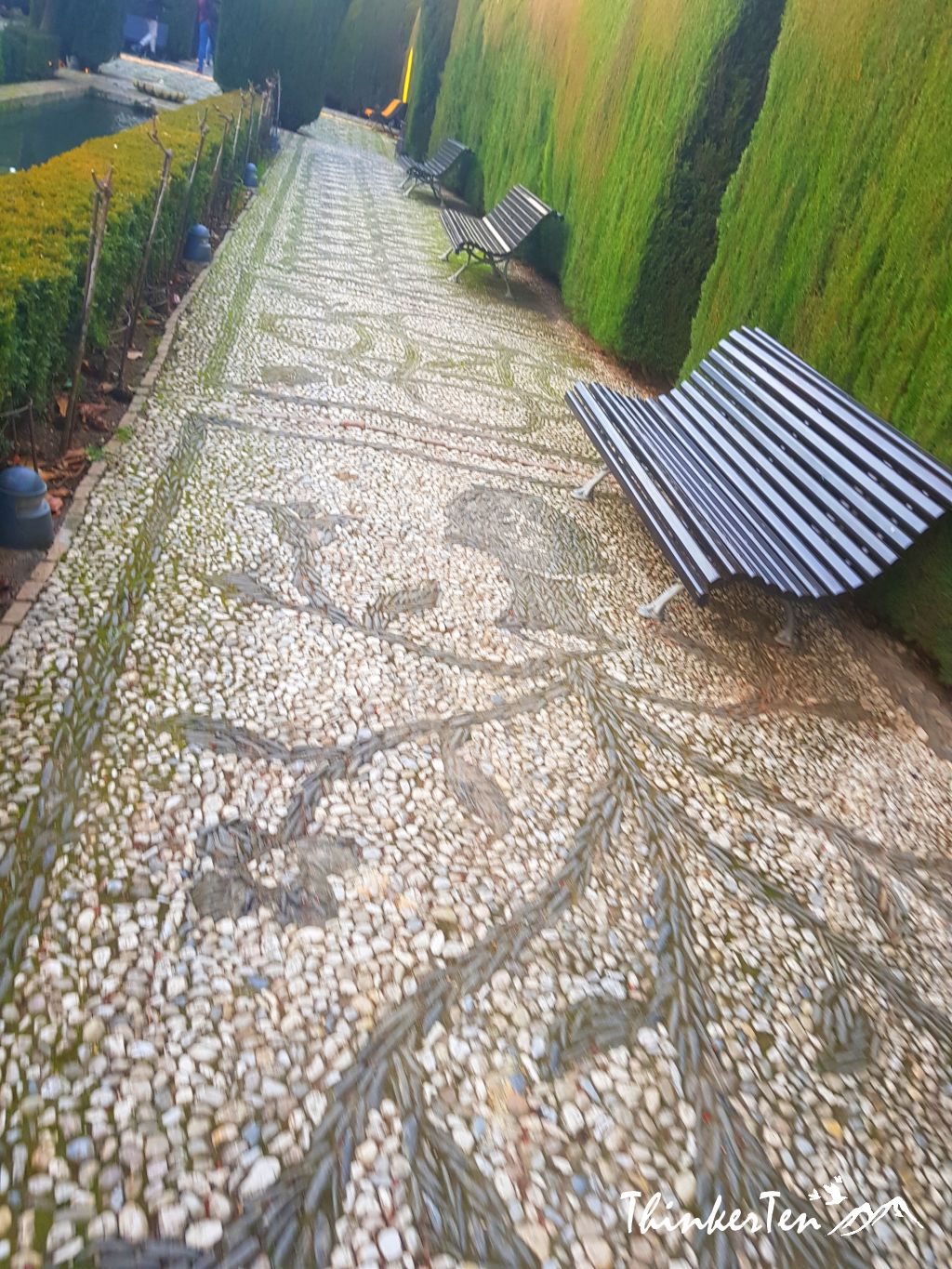 The best example of Morrish architecture can be seen in Alhambra. 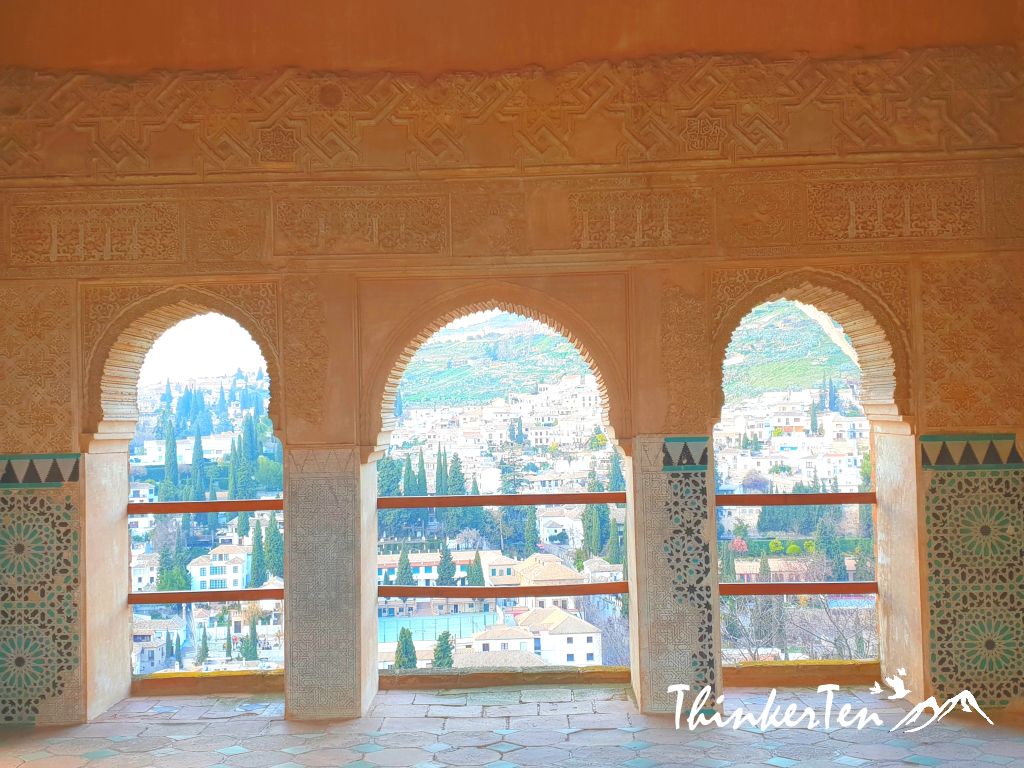 Carved medieval walls with Arabic inscriptions that adorn them from floor to ceiling. So what do these words telling? “There is no victor but Allah” – is repeated hundreds of times on walls, arches and columns. 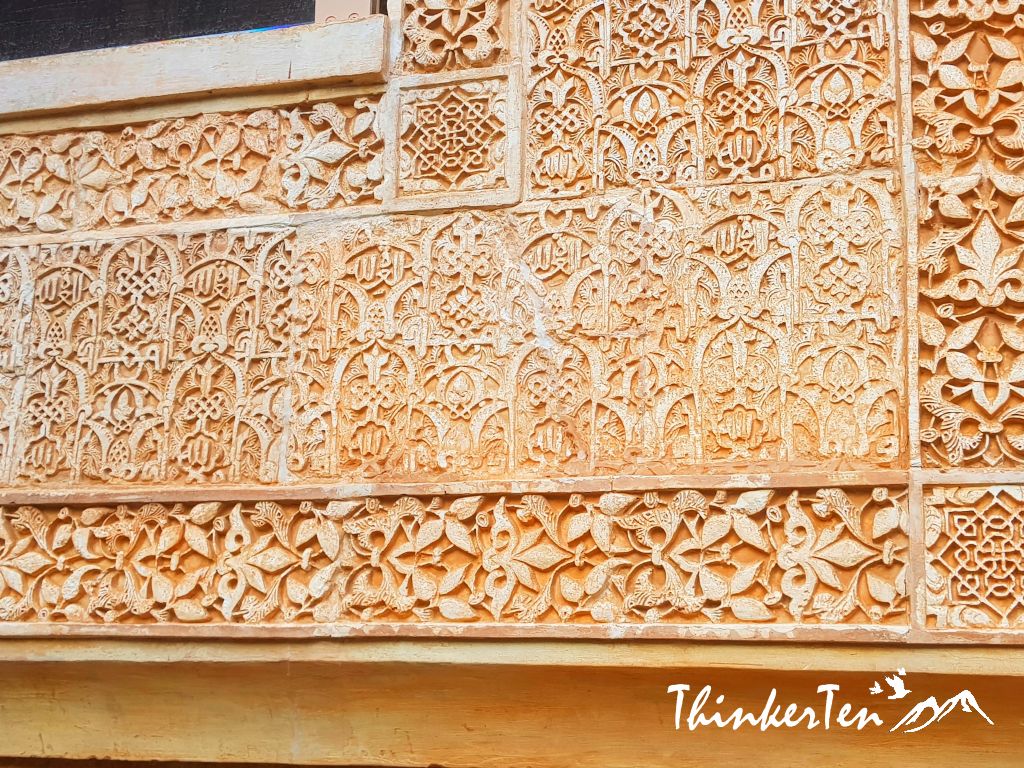 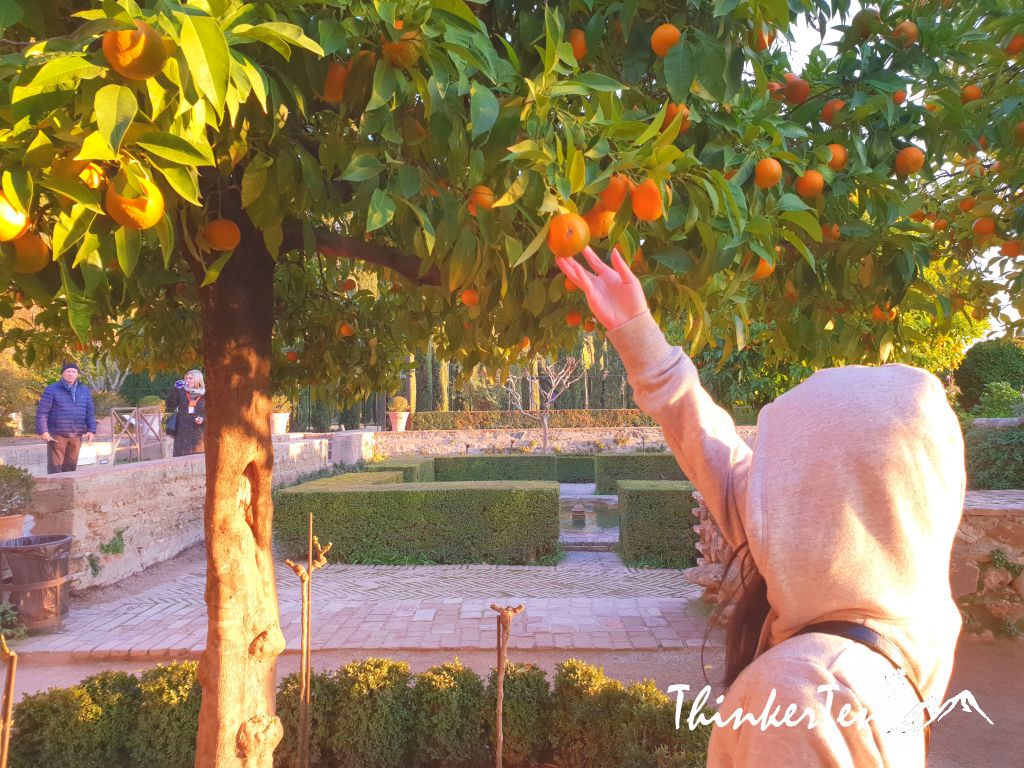 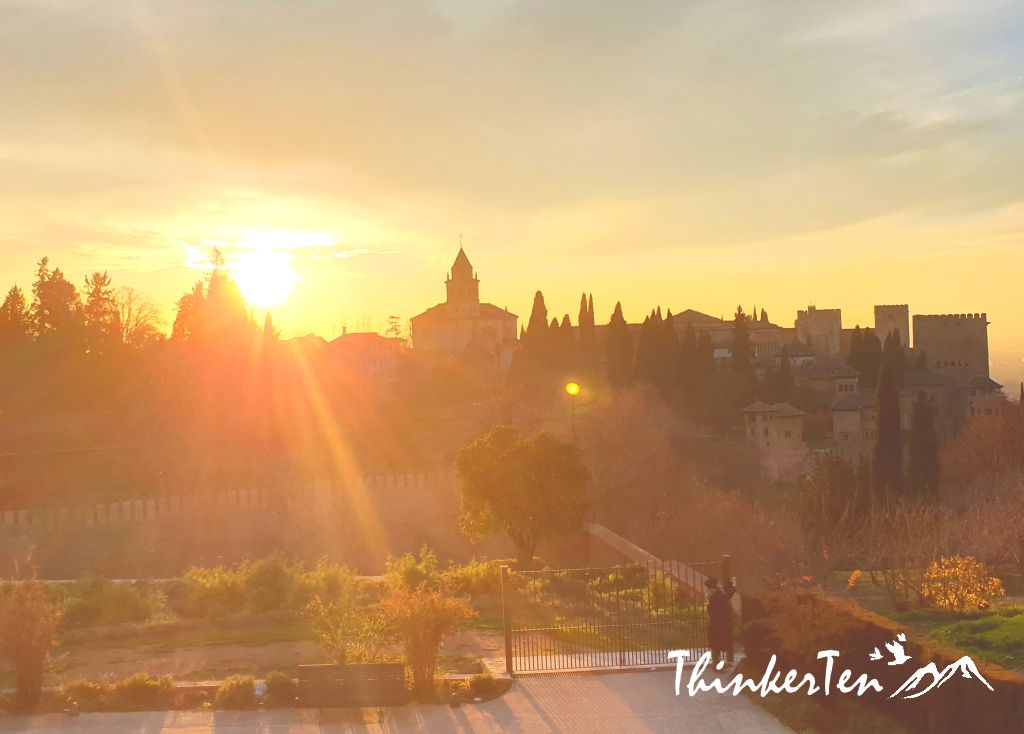 Alhambra is a must-visit when you come to Granada, the water system amazed you and create a calming effect and music to your ears.  It also cools down the whole palace during the summertime. 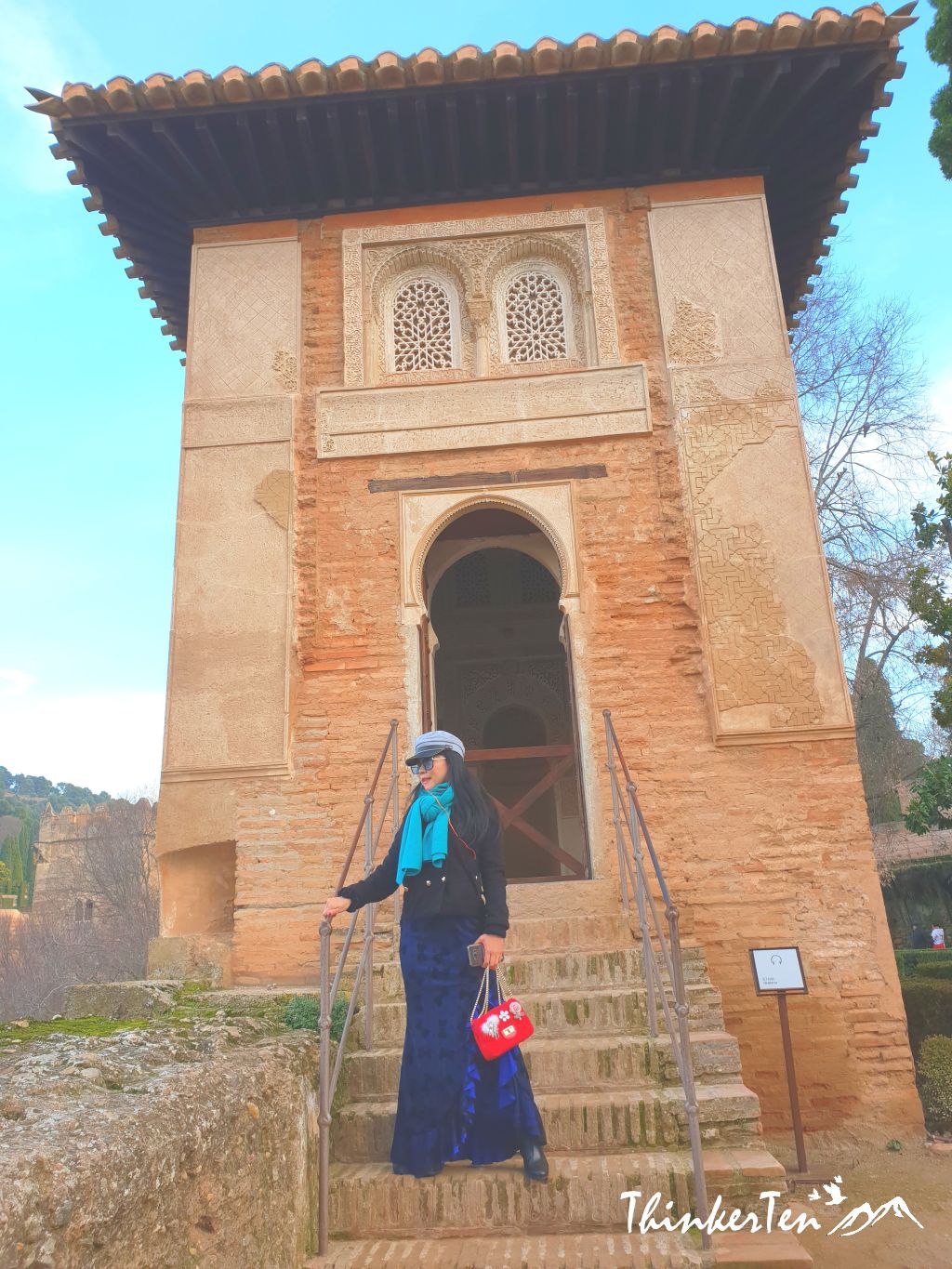 The pictures are so good, AI almost felt as though I was in Spain. The best tip is to book in advance for sure! it gets crammed easily

Explore with an expert guide will give you a lot of information about Granada and things to see.

I felt being transferred to Granada of the time it was with Carlos Quinto. The photos are amazing, and the historical facts are fascinating.

The new place that was built by King Carlos Quinto was pretty amazing, took so long to complete due to so many reasons, one of them is lack of fund. It was finally completed but no King ever lived in there because it took so long to complete and I believe some of them die before it was completed. LOL. Anyway, the renaissance building was simply stunning and stands out near the Alhambra site.

I simply wanted to make a quick message so as to thank you for all of the fabulous items you are writing here.

Oh my goodness, this place looks beautiful! Although I’ve never been to Spain before myself, I would love to make my way over in the near future. Thanks for sharing all of this! 🙂

The view from the top overseeing the famous neighborhood -Albayzín is just breathtaking, by the way, it is in white.

The photos are amazing! I’ve always wanted to visit Alhambra granada (it’s still on my to-go list) but now I found one more reason to go. Beautifully inspirational!

Like I said, your Spain travel cannot be completed without Alhambra in Granada, the whole site is pretty amazing, it is like a small little city up the hill.

You have elaborated the places so well with lovely pictures. Liked the post with the hope that I will make it some day

Hope you get to visit Alhambra in Granada Spain soon, this is the Unesco Site.

Mix emotions on seeing the photos.. Some parts are kind of spooky but some are very nice. I would prefer a day tour! LOL

Your comment made me laugh, and indeed so true.

The Alhambra is a remarkable site. I did not get my tickets in advance but I was lucky and the queue was not too long.

Oh my…what a beautiful place and the photos are so lovely. I wish I can visit this place one day. Thanks for sharing.

Alhambra is located at the hillside so when you are at the top, you will see the opposite village in white, that is another stunning sight.

This part of Spain looks so enchanting. Alhambra Granada looks like a place people should definitely visit.

You are right, when you visit Granada, Alhambra is the most visited site here.

Generalife palace and garden looks so great..! Thanks for sharing tips when visiting Alhambra. I would keep this post.

The Garden in Generalife is really amazing, the orange trees, cypress and roses are just beautiful.

spain is such an elegant country to visit, full of beautiful landscapes and architecture, I wish to see it personally someday

This is amazing. I would love to visit spain one day and this specific place shows history and serenity. Picture perfect!

Since there are so many visitors per day, the tickets sold are with your name printed in. Online booking is always advisable to avoid disappointment. You don’t feel crowded at all as the complex is so huge and lot of space.

I always wanted to visit spain but did not think of alahambra, i thinks its a good place tho

Alhambra in Granada, the southern part of Spain is good to include in if you are planning a Spain road trip. The whole site of Alhambra is huge and it takes you 3-4 hours to complete. Lots of walking.

Alhambra looks like a great place to visit which hopefully I’ll be able to do soon. Plenty of amazing things to see too.

Alhambra is a must-visit site in Granada also the crown jewel and Unesco World Heritage site. The architectures here has a lot of Moorish elements so it is pretty unique.

These all sound like fabulous places. Spain is certainly on our bucket list. I am saving this for future reference.

Spain is so cool to visit and every region has different culture and custom. There are in total 17 autonomous regions in Spain and Andalucia region located at the southern part has its own unique taste.

Thanks for your kind comment. Alhambra is truly a nice attraction to visit, the whole complex is big and lots of photo opportunities.

I’m always researching about a place before I can actually get there so thanks for the list! Anyway, I’m amazed by the whole architecture of the place- every single structure seems to have been carefully con structured. I would really use more pictures if I went to Alhambra!

Great info. I have a client moving to Spain, this will be very helpful for them

Amazing advice and pics! Love this post, thank you for sharing