I am more of a country person so Hutong always interests me and I wanted to find out more in the Shanghai Hutong.  I was hoping to capture the scene of Shanghai women wearing the qipao walking in the hutong of old Shanghai.

Hutong or Longtang in Shanghai is narrow streets or alleys with old buildings from ancient times.  Since I could not find any Qipao woman, (I actually knew the chances are slim) hence I gave up and navigate to go to Yuyuan. It is quite hard to find the entrance of Yuyuan as I am almost lost in the Hutong.

Clothes were hang between two roofs top, quite an interesting sight in Hutong.

Hutongs represent an important cultural element that you won’t know what to expect when you in these narrow streets. 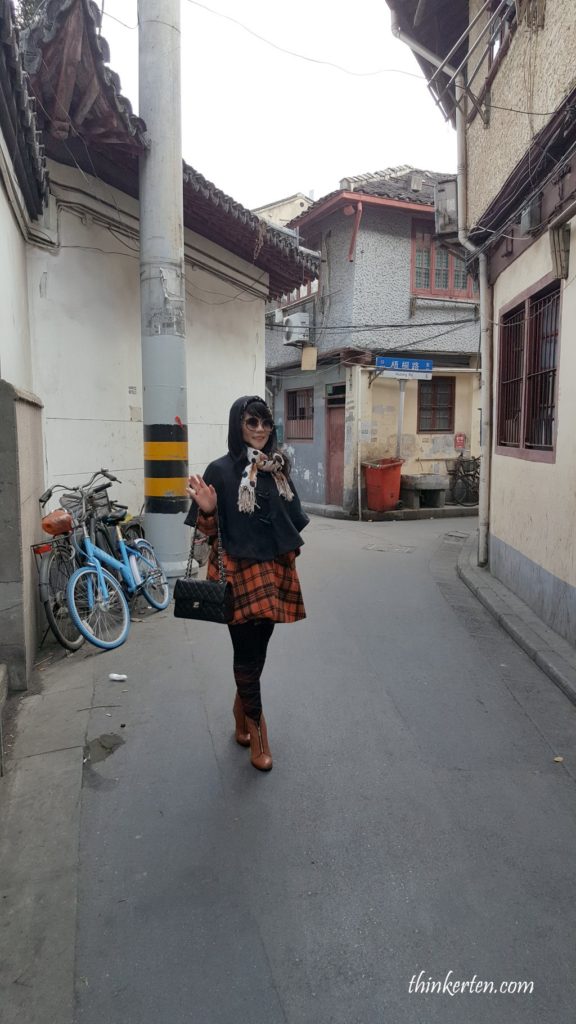 Found a small convenient stall selling vegetables and frozen food and drinks to the locals who may live in the hutong. 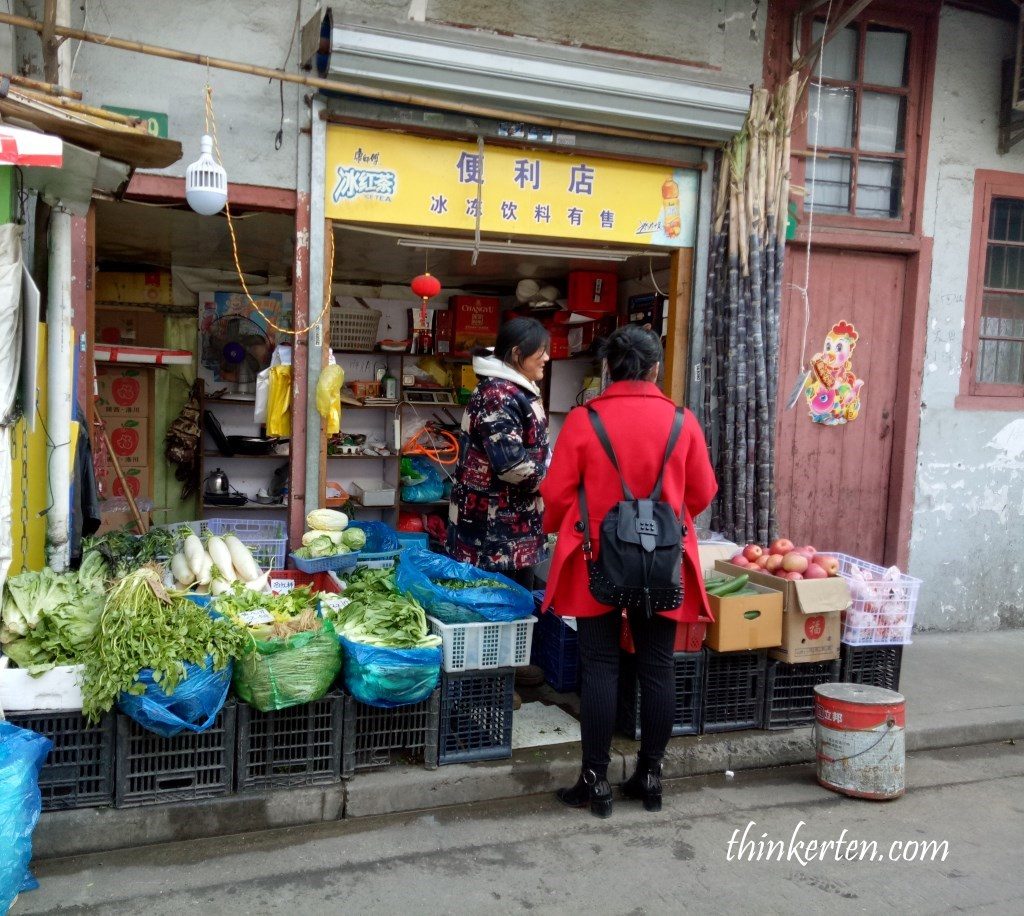 Hutong can be found more in Beijing and it normally formed by lines of Shiheyuan/四合院 – house with a courtyard surrounded by buildings on all four sides. 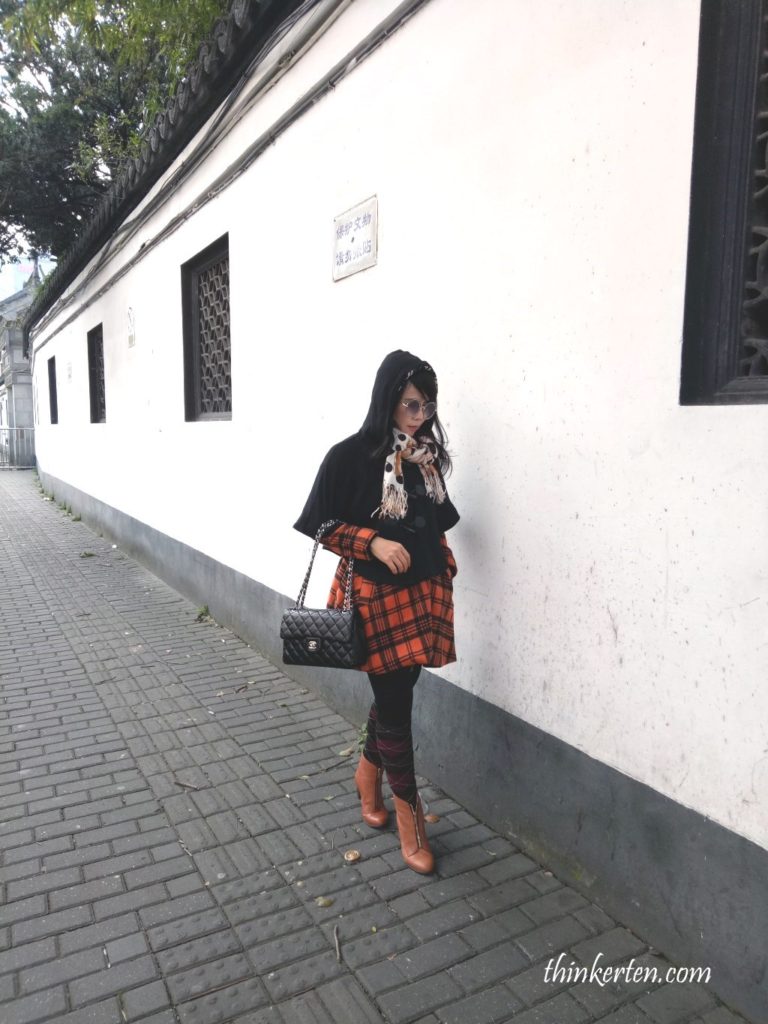 I noticed most people who stay in Hutong are old people, the young all go to live in modern apartments which have better facilities.

After half an hour of walking, I finally found Yu Yuan.  It is located beside the City God Temple/城隍庙 in the Old City of Shanghai. 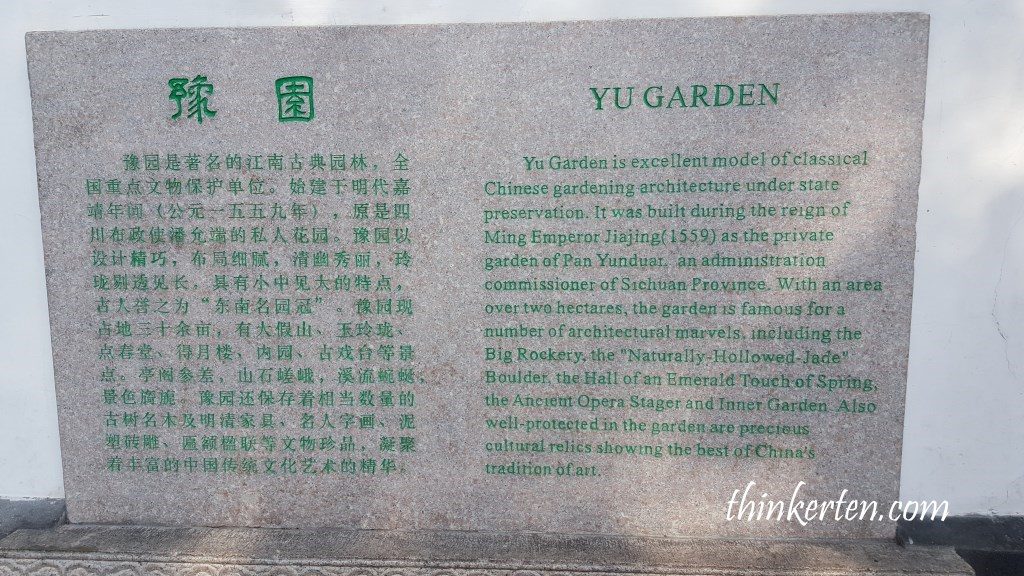 Upon entering Yuyuan, you will find a big rockery, which is known as the Great Rockery.  It is the oldest and largest rockery in the area of the south Yangtze River. 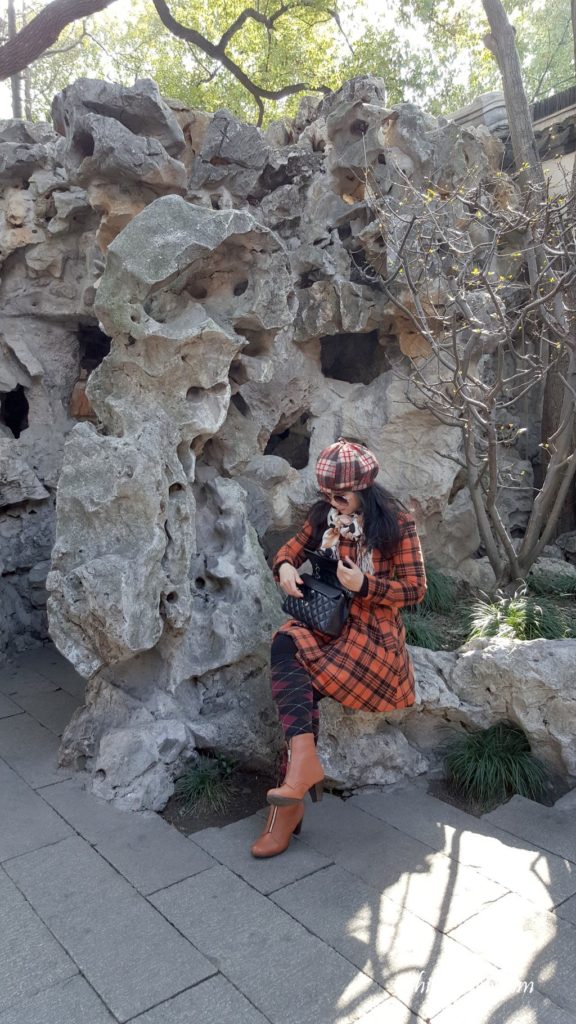 Yuyuan was built in the Ming Dynasty by a high rank officer called Pan Yuanduan. He built this garden for his parents to enjoy their old age. 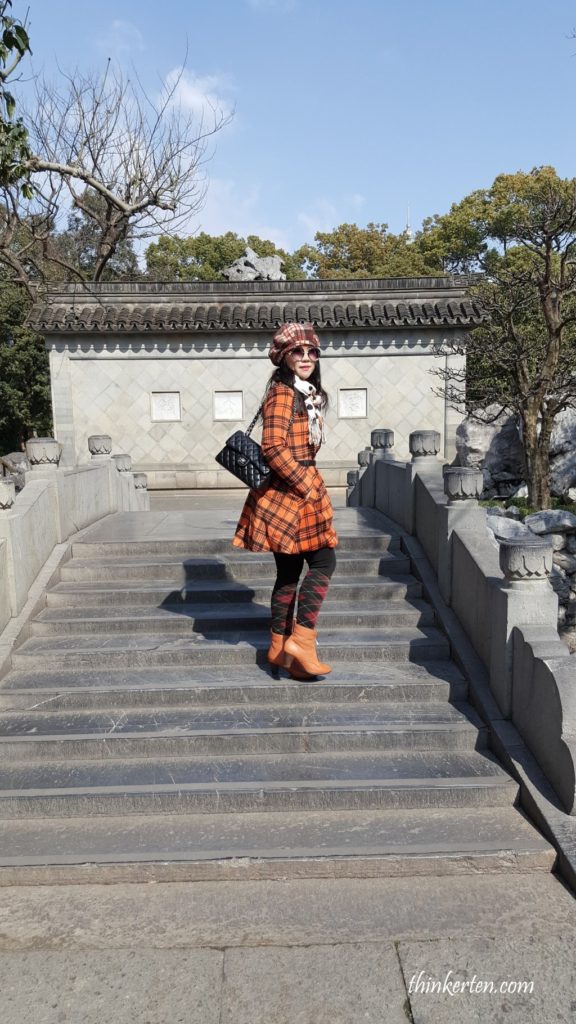 Yu Yuan is an excellent model of classical Chinese gardening architecture under the state of preservation. The garden is famous for a number of architectural marvels.  I was standing in front of a huge old door which does not open anymore.

This place is serene and peaceful and the garden is big about 2 hectares.  Obviously I need to take a rest and get some sunshine while enjoying the craving on the wooden doors. 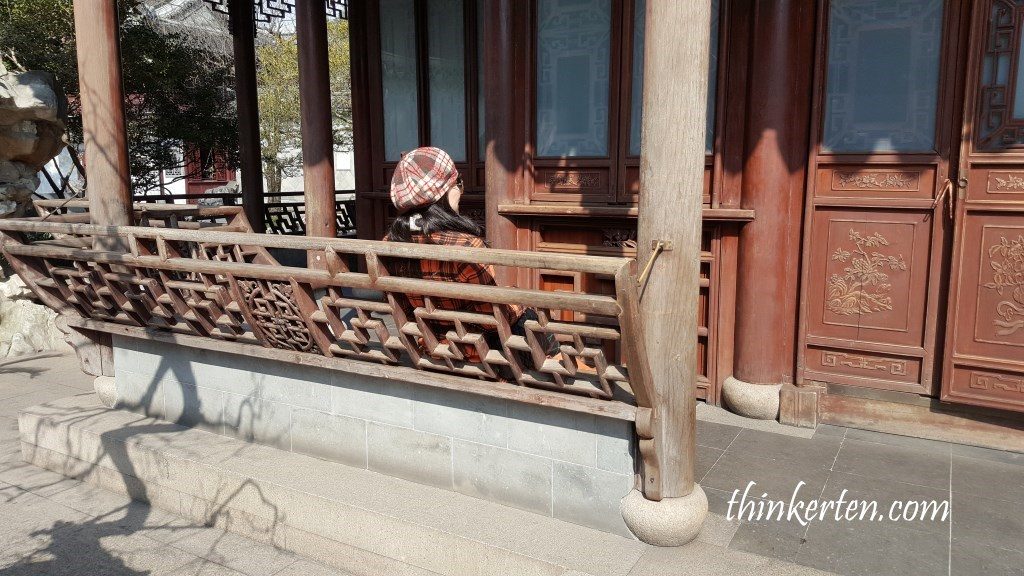 Yuyuan Garden is a major site for kinds of cultural and recreational activities in Shanghai in the past and at present.  It is still having a various exhibitions of flowers, calligraphy, painting, unusual stones, and other recreation.  While I was there, I notice there is a calligraphy exhibition going on.

Check out the two windows in the below picture, there are in a different patterns.

Walking in this tranquil garden makes a great getaway from the busy city of Shanghai.  The below picture is the round door that can be found in most classical Chinese gardens, also known as ‘moon gate’.  The purpose of these gates is to serve as a very inviting entrance into gardens of the rich upper class in China. 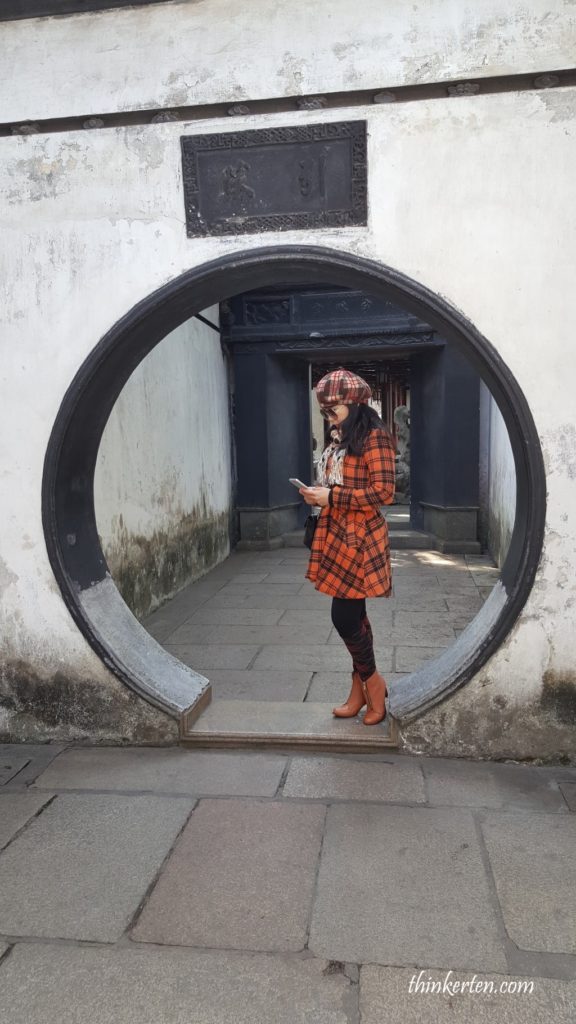 You cannot find many ancient buildings in Shanghai except coming here. 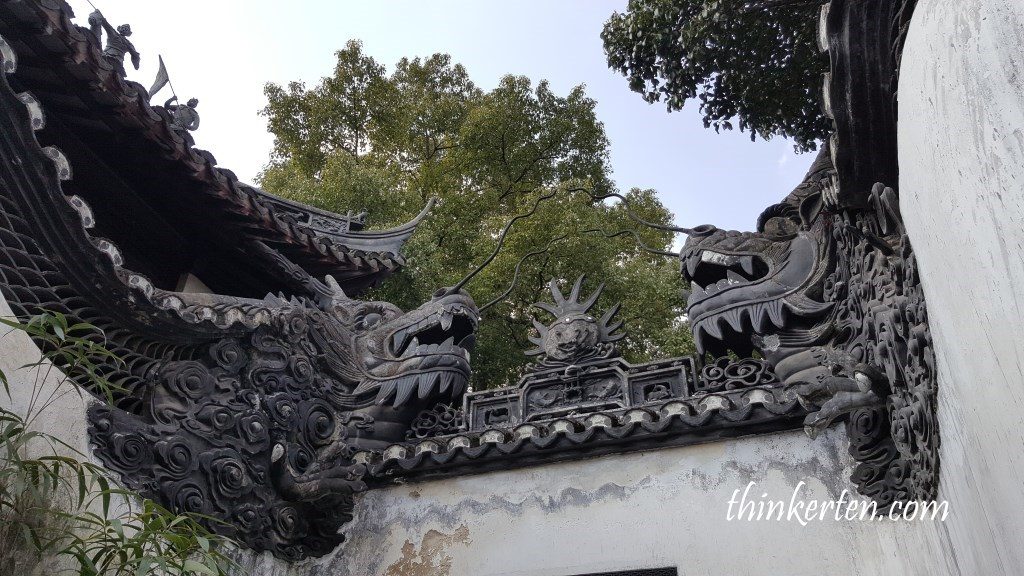 It is best to come here with an experienced local guide who will explain all the details to you.  Every stone and every corner of the architecture has a story behind it.

Not all places are good for photo opportunities, some scenes have a high rise building at the background.

There is a stage in the Yuyuan garden where the guest was being entertained in the old days.

2 stories of the spectator’s seats with wooden chairs.  I saw a few workers were doing the cleaning and wiping.  This place is ancient-looking but still well maintained.  I wonder if this stage is being used for Chinese Opera?

There is a Yuyuan Old Street with stores selling local souvenirs.  It is quite dim when you walked in. 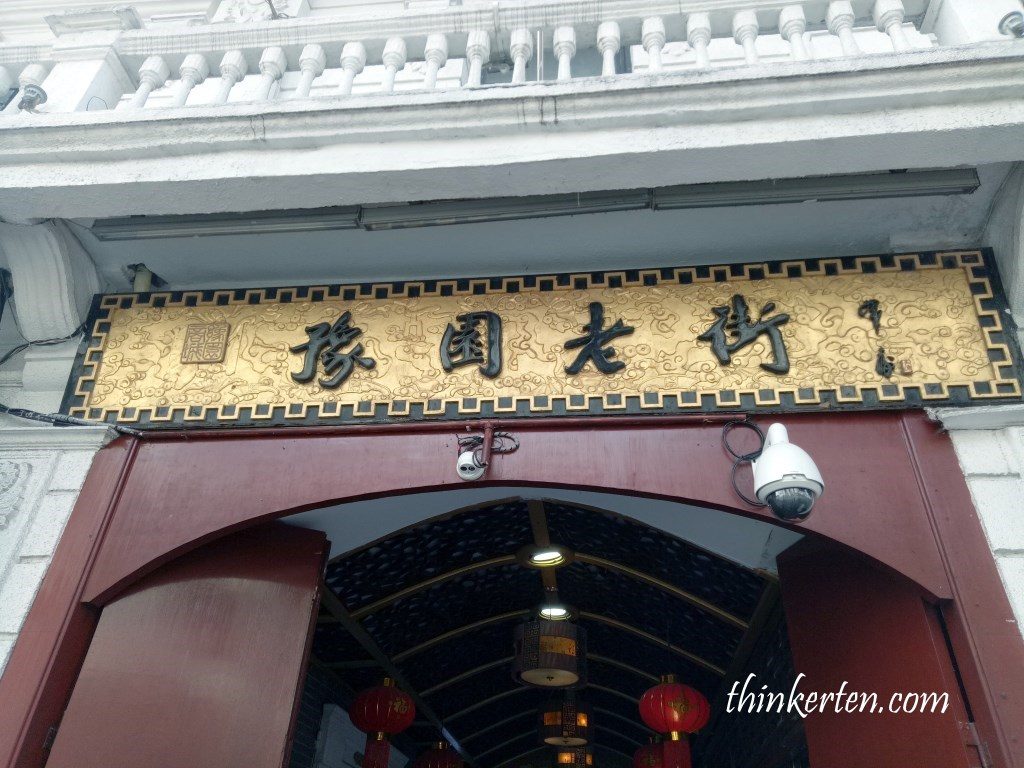 This is more of a shopping place for the local souvenirs and restaurants and street food. 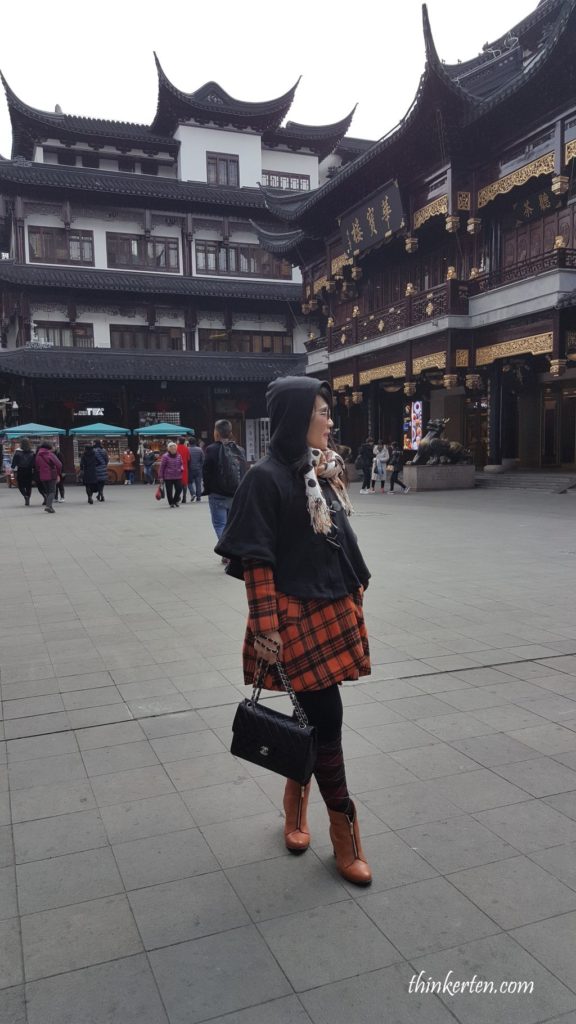 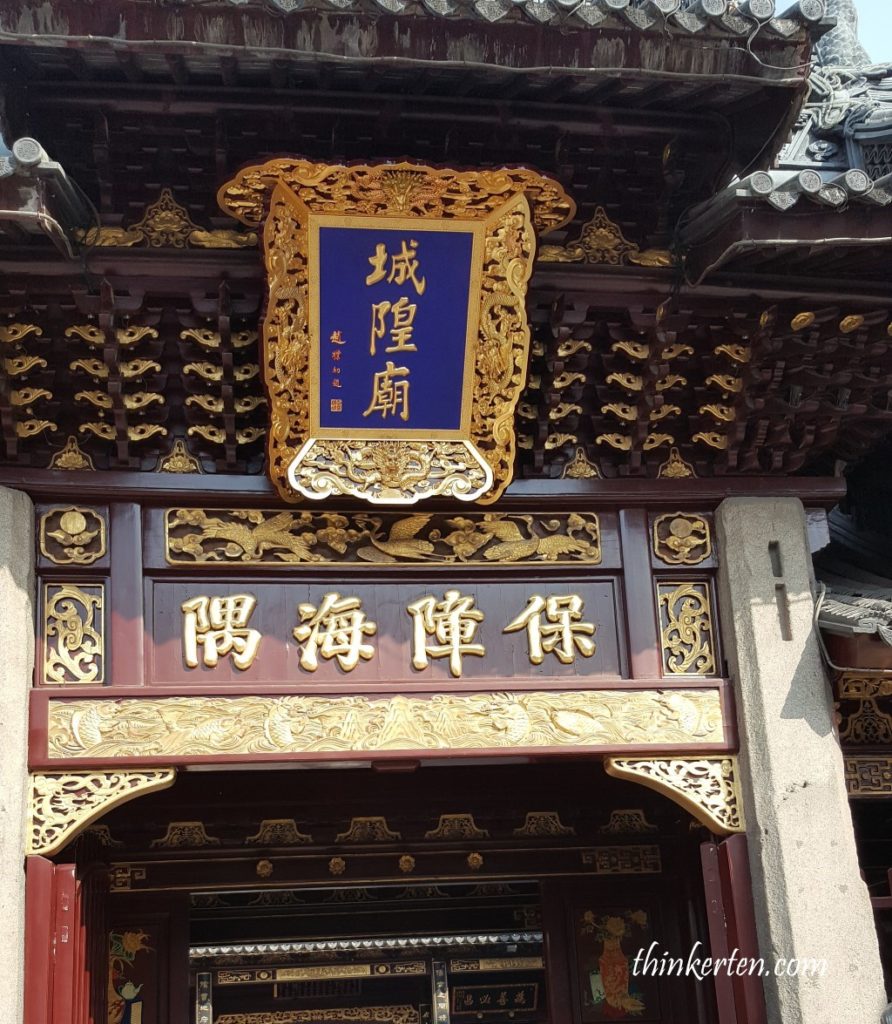 Again this is more of shopping for Chinese souvenirs and some antique shops.  Actually antique is not allowed to bring out from China.

Shanghai is also the place for Qipao.  Qipao is not cheap in Shanghai but is good to try one out while in Shanghai.  I did not try out any because it is too cold to wear Qipao in the season I traveled.

A shop selling very old comics books, suitable for those who keep for collection. 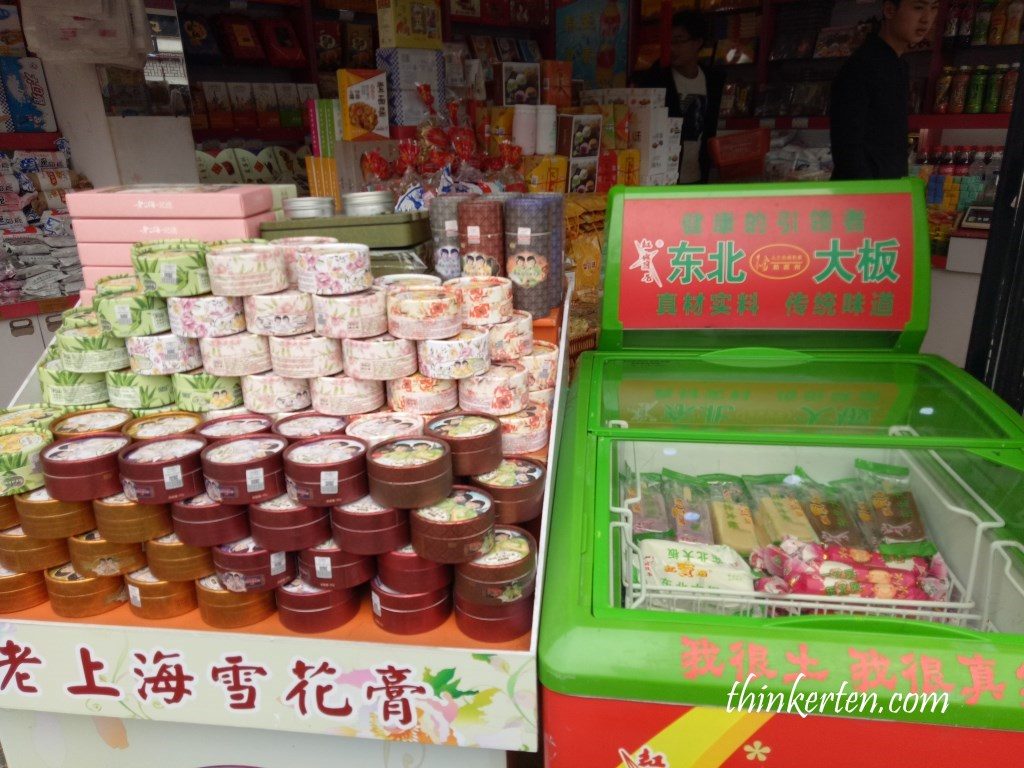 Traditional Chinese Doorknobs were seen selling at Old Shanghai Street.  Some form of lion and dragon shape of doorknobs were seen.  Dragon’s heads offered a projection of strength and protection; gargoyles represented the malignant spirits barred from entry, harnessed to serve both as a call and a warning to others who may trespass.  Lion head symbolizes strength, pride, protection, and supremacy. The Kings of the jungle but even so a lion door knocker serves the master within, which implies those who dwell behind those doors are mightier still.  So have you decided which one to buy?  Lion or Dragon? 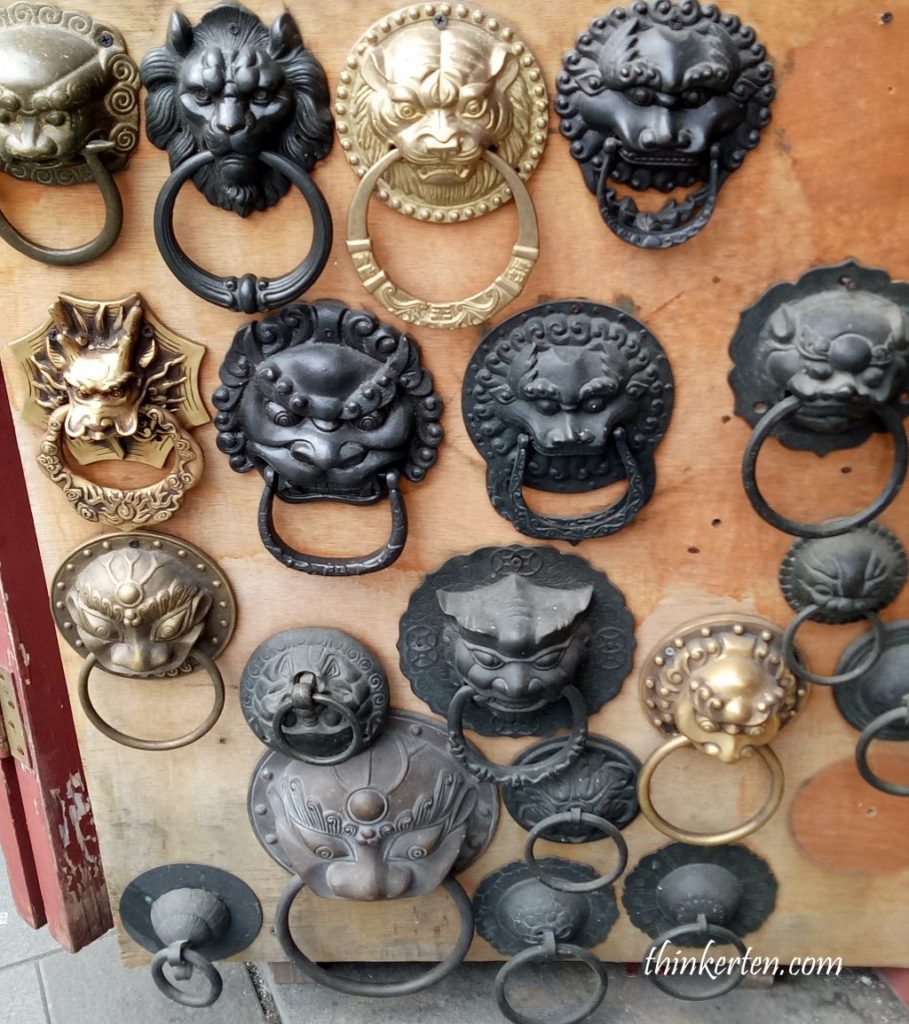 What to buy in old Shanghai Street?  You can see many shops selling silk scarves, I think it is great gift to bring home as it is very light. 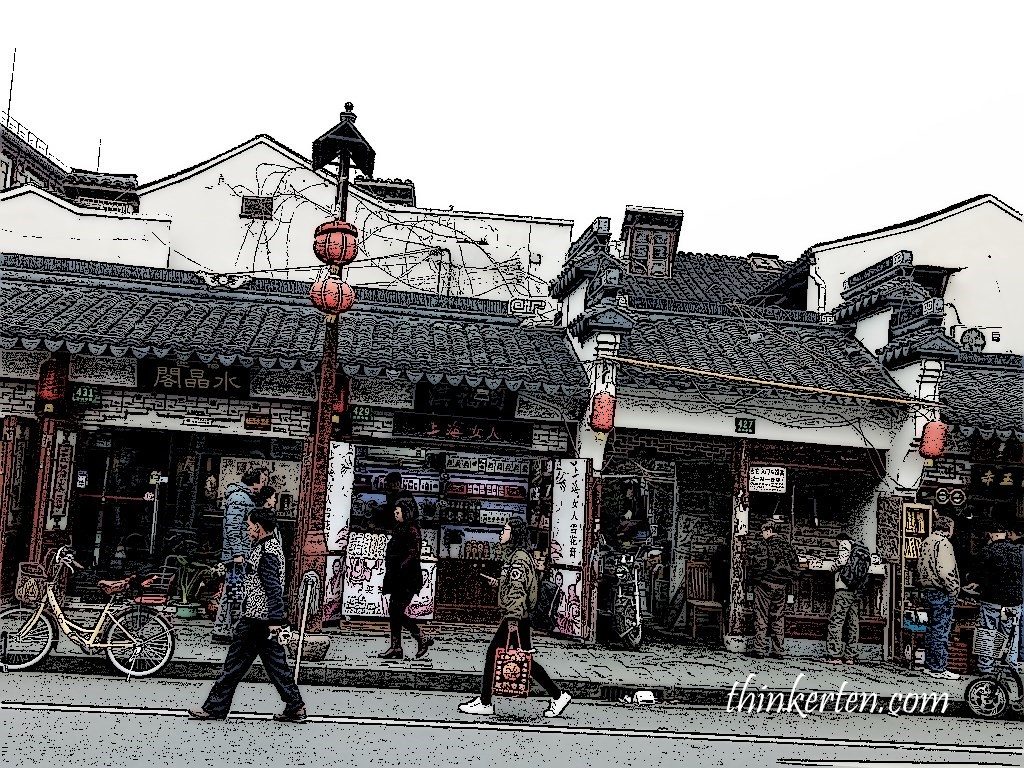 Chinese people love rocks and Chinese people love gambling also.  It depends on how much and how is the quality of Jade hidden in the rocks.  The better or higher quality of the Jade, the more money you gain.  It really all depends on your luck, some people spent million to buy a big rock which did not have any Jade inside the rock when it gets cut open!  Some turned instant millionaire once found the rock they gamble has a high quality of Jade.  I do not have the guts to walk in the shop but only looking from outside as I prefer to stay away from gamble.   Gamble on Rocks is more popular in Yunnan area, near Myanmar, where most Jade is from. 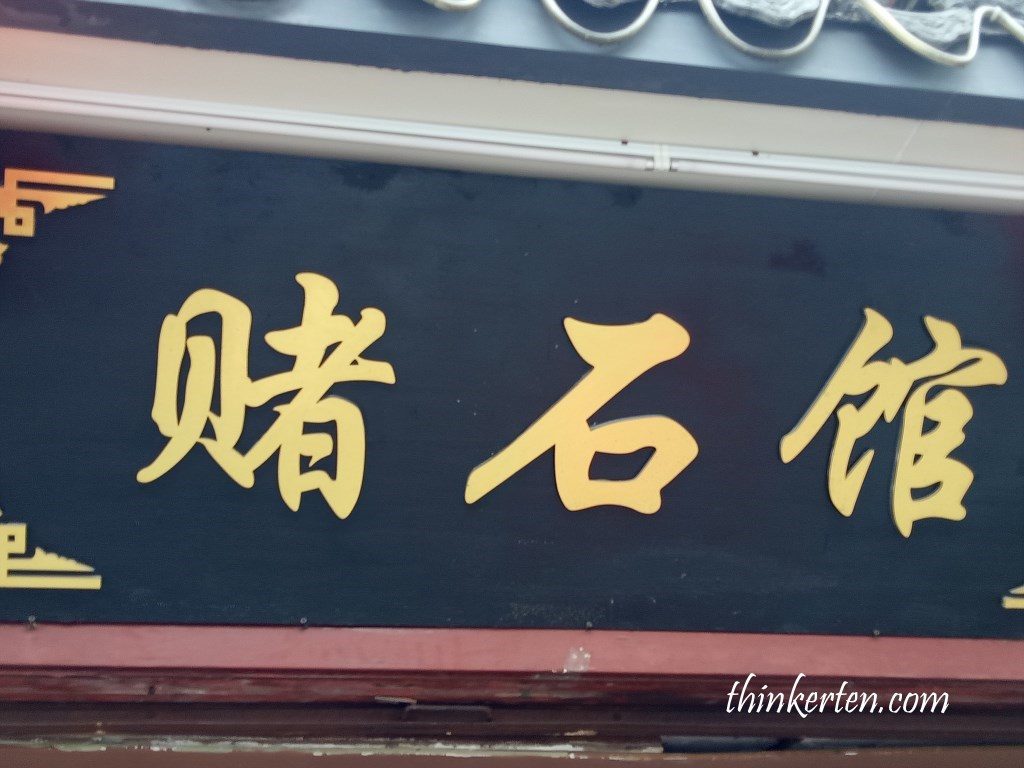 Let’s find out about modern Shanghai!

Lujiazui is the CBD/central business district of Shanghai and one of the financial centers of China.  In fact, Lujiazui has already surplus Hong Kong financial center.  You can see many skyscrapers here,  3 major tall buildings are Shanghai Tower, Jinmao Tower, and World Financial Center.  Coming to Shanghai is more of admiring the tall buildings, especially for the local tourists who came from the countryside.

If you look closely, you will notice the top of the building is like a Japanese Katana sword, refer to the below picture.  It was said once this building was completed in 2008, many bad things happened in China, such as Wen Chuan Great Earthquake and China Milk Scandal.   This building involves multinational firms, including Japanese Developer, (no wonder it looks like Katana) and American and European investors.  Can you see how sharp the edge is?  Quite Scary. 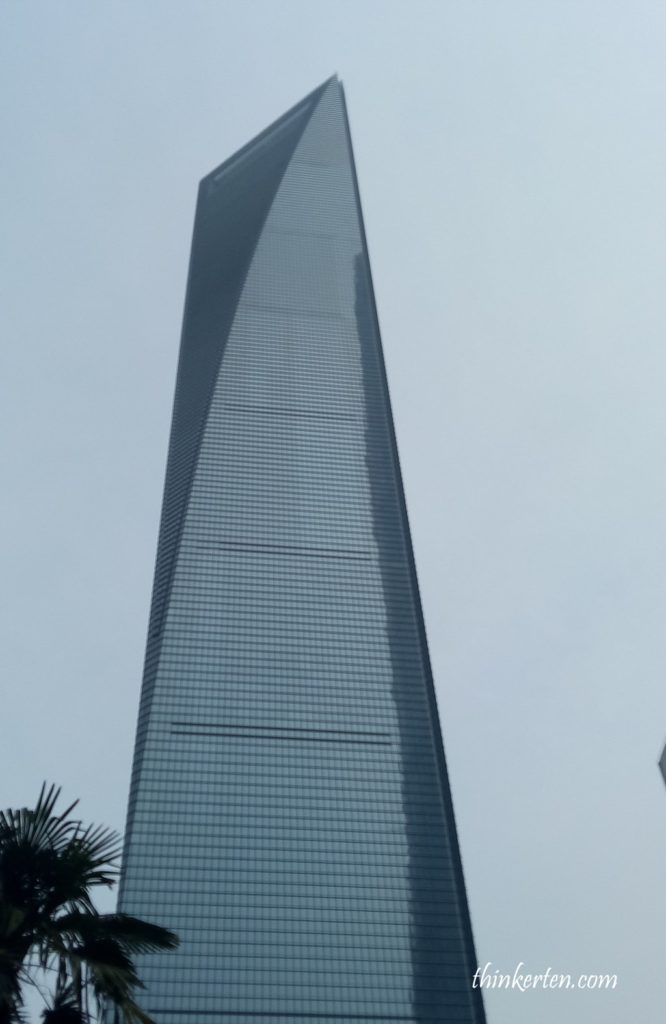 The one on the far right is Shanghai Tower, the shape is like two overlapping ‘tubes’ also look like a thermos flask.  It is so much taller than the 2 on the left. 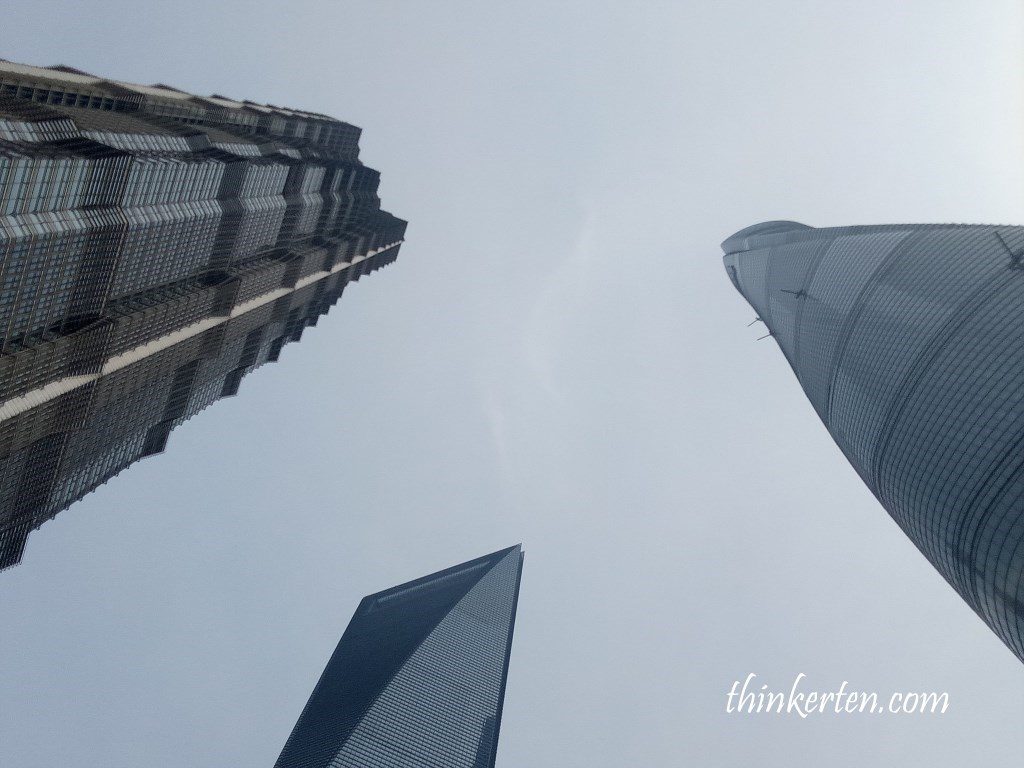 I went up to Jin Mao Tower to have a panoramic view of Shanghai city. This is the cheapest tower to go up as compared to the two taller buildings beside Jin Mao. 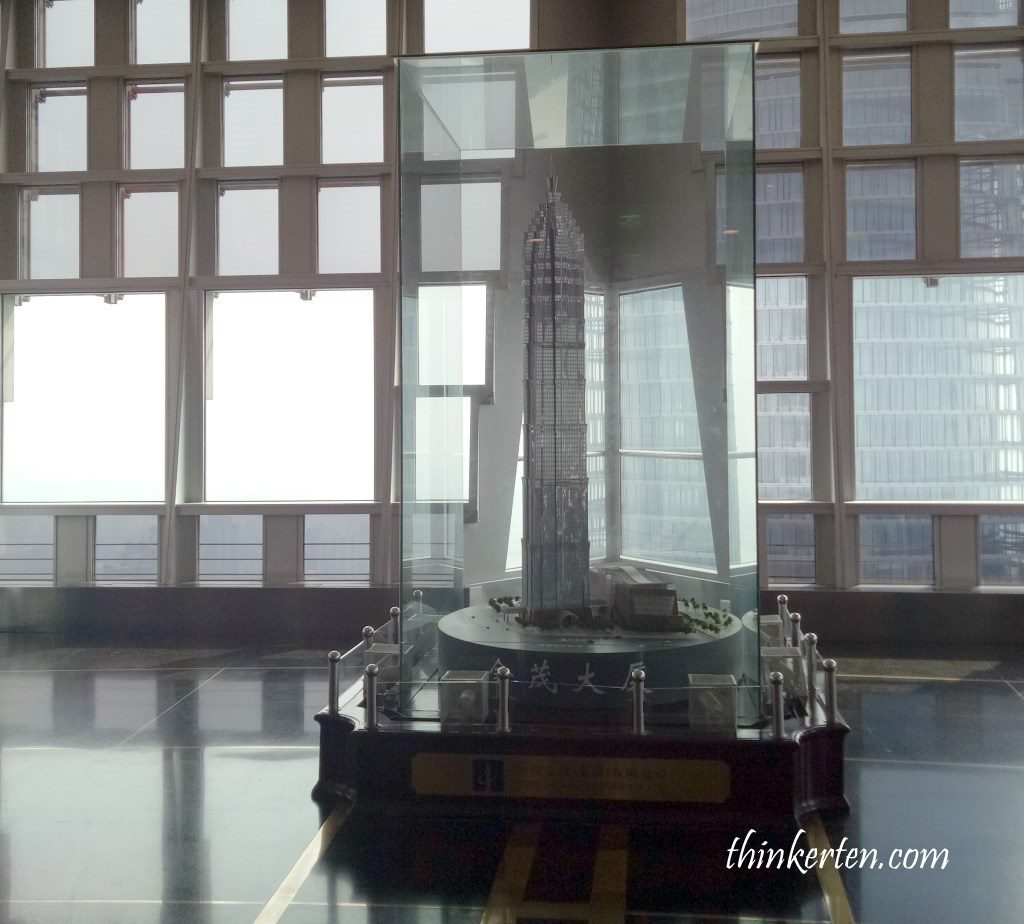 BASE Jumping from Jin Mao Tower

Jinmao Tower has 88 floors and the number 8 is always a lucky number and brings luck to the Chinese belief.  If you dare enough you may want to try base jumping from Jin Mao Tower.  A base jump is conducted from a fixed position with the use of a parachute and it is slightly different from Bungee Jumping. BASE also stands for Building, Antennas, Spans(bridges) and Earth.  Of course, I have no gut to try out this daring spot.  I was already feeling dizzy and shaky legs when walking near the glass window in Jin Mao Tower. 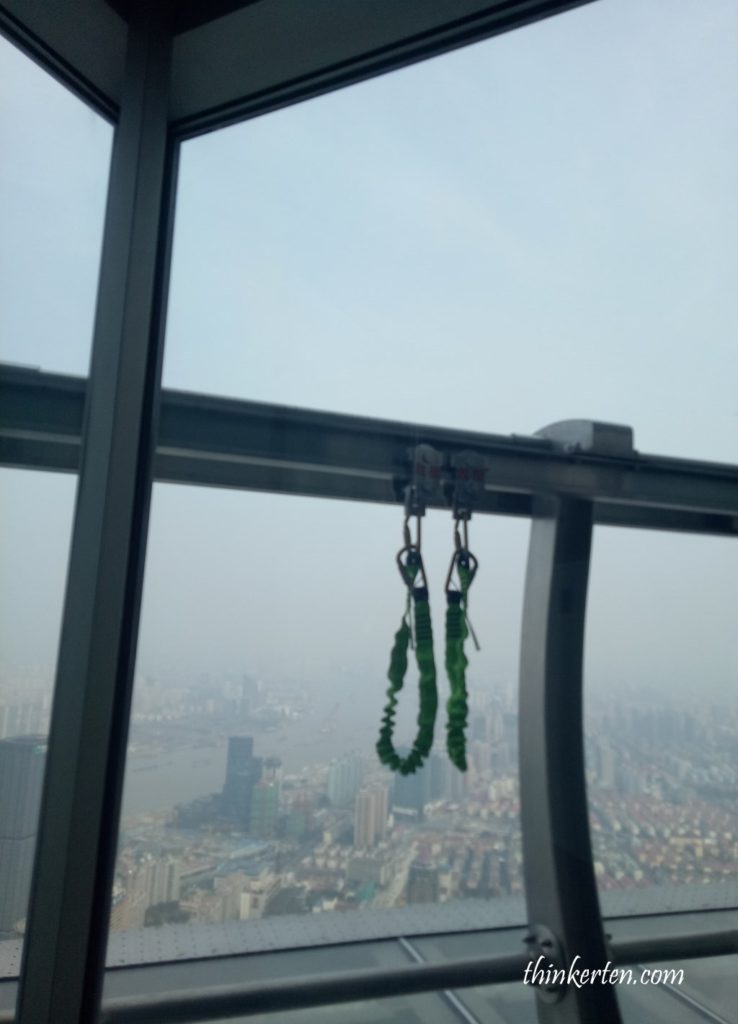 From Jin Mao tower, I was trying to look for the most iconic landmark in Shanghai, the Oriental Pearl Tower.  Captured this iconic Tower! 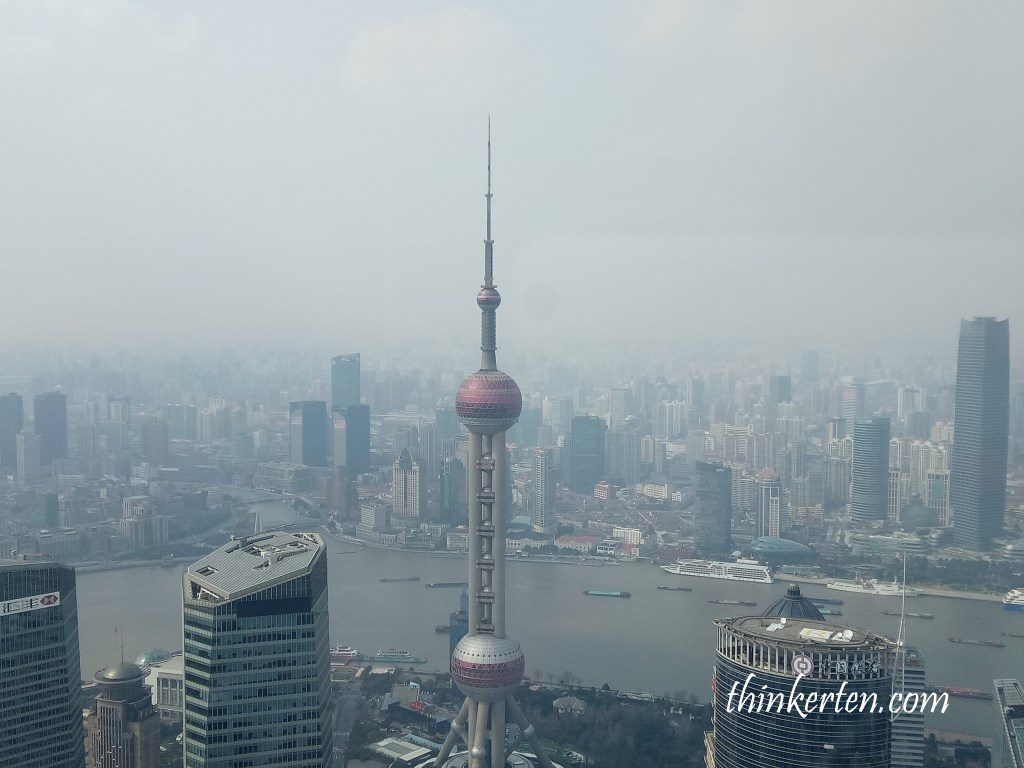 If you walked on the busy streets of Shanghai, you can see plenty of orange bikes park on the streets.  These are rental bike by a company called Mobike. You can just pick up a bike by scanning the QR bar code stickers on the bike.  It only cost you RMB 1 to use for half an hour.

This is a great system for you to explore around the busy city of Shanghai.

I went to Jinke Road station and have my lunch there.  This place is more for the office building and more like some technopark. 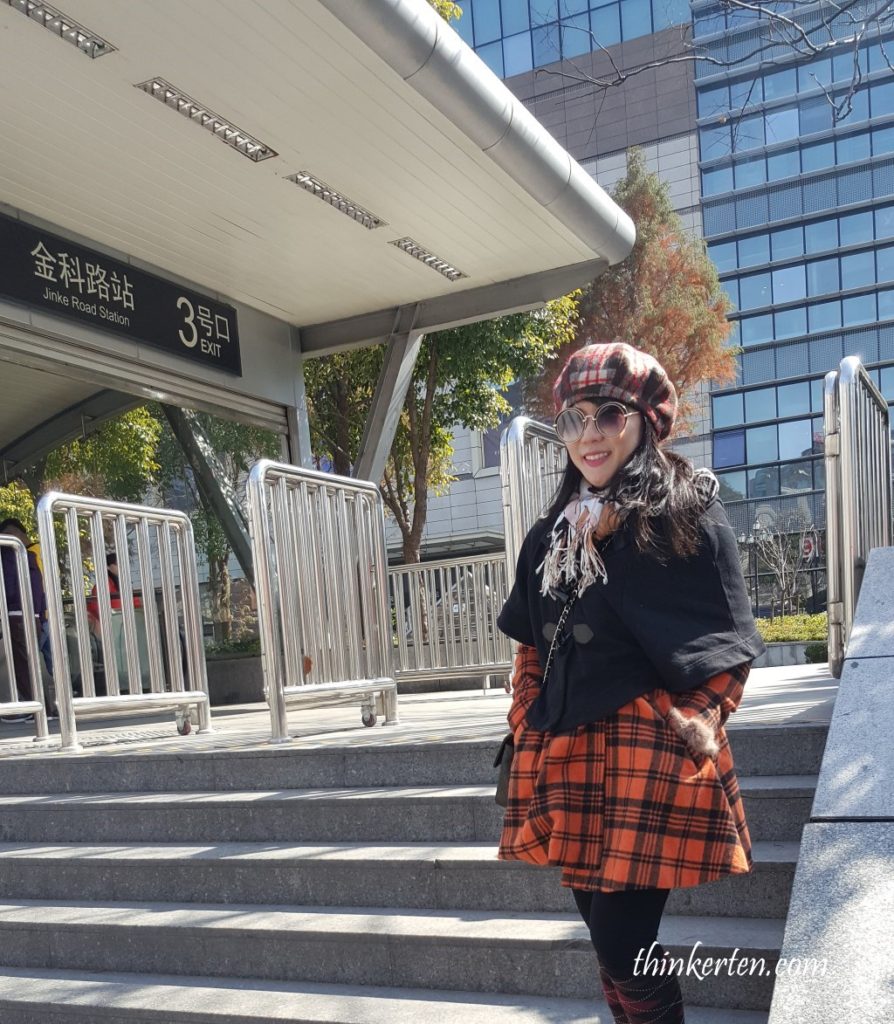 Bread Talk and Toast Box were found in the nearby shopping malls. 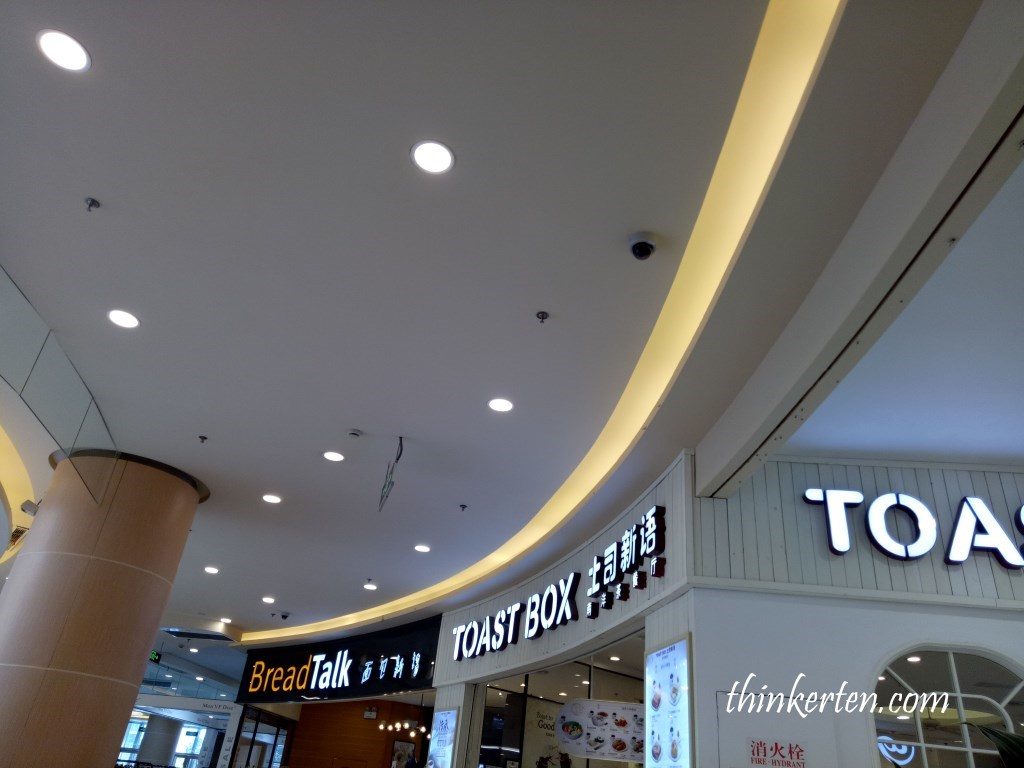 I went to a local store to have the beef noodle RMB 25 with suan cai/sour Vegetable or also known as a pickle.  I also ordered an additional smashed cucumber with sesame oil – RMB 7.  Things are not cheap in Shanghai, after all, Shanghai is the most expensive city in China.  Smashed Cucumber with sesame oil is a popular small dish, I ordered almost every day.  If you think it is healthy, think twice, look at the oil in the dish?  Pretty scary. 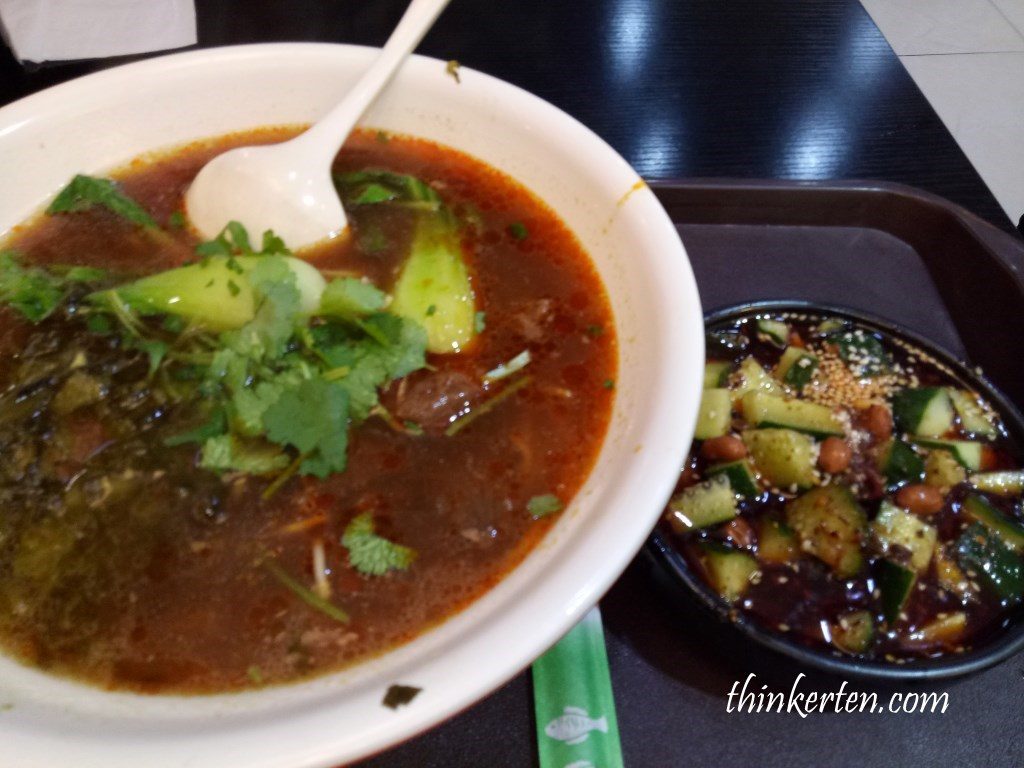 Part 1- How to get around in Shanghai Free and Easy