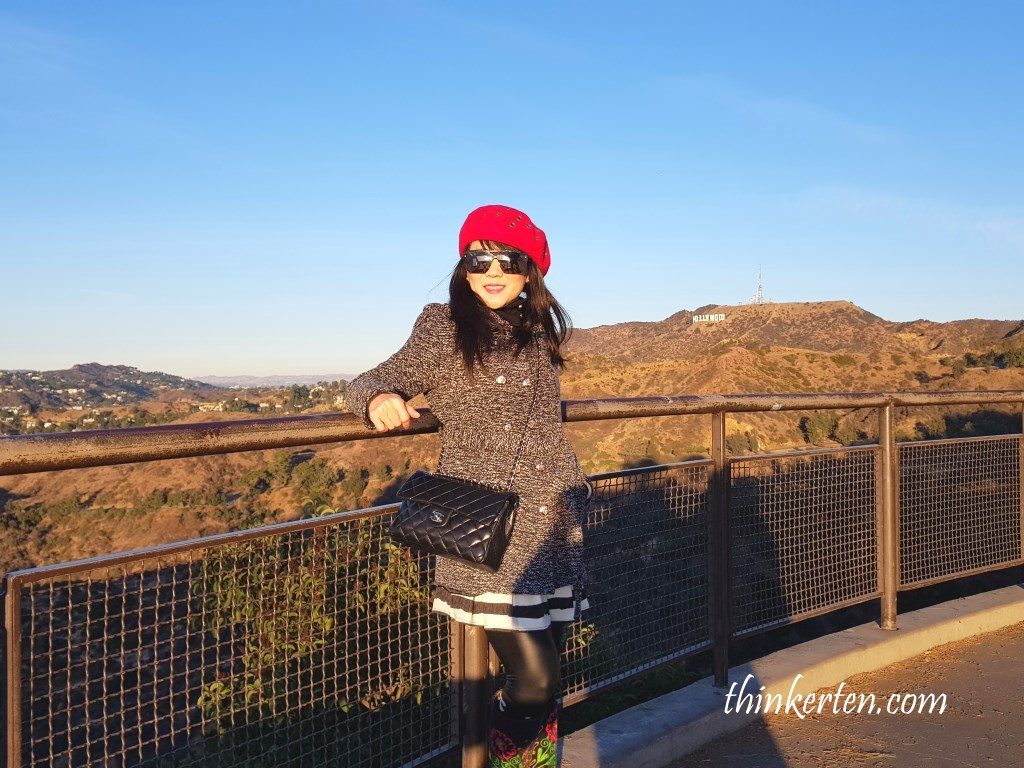 One of the best part of this place is you will be able to spot the “Hollywood” sign clearly!  Very excited for tourists like us 🙂 Beside the prominent Hollywood sign, the landscape is pretty stunning too, you are able to see Santa Monica and the Pacific Ocean plus the whole downtown of LA which is surrounded by the layers of mountains. 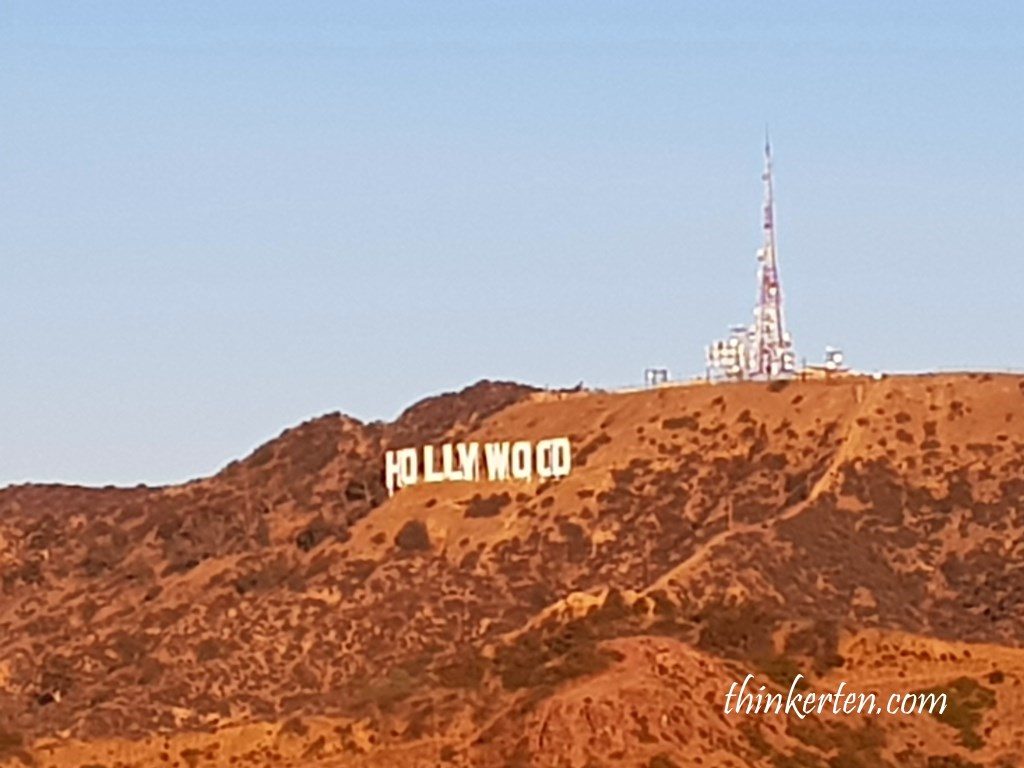 The best time to come is in the evening when the sky is getting dark, that way you are able to enjoy the lights of this big city.  But if you would like to avoid the crowd and the traffic jam, you can come early as the traffic & parking can be a headache in the evening. 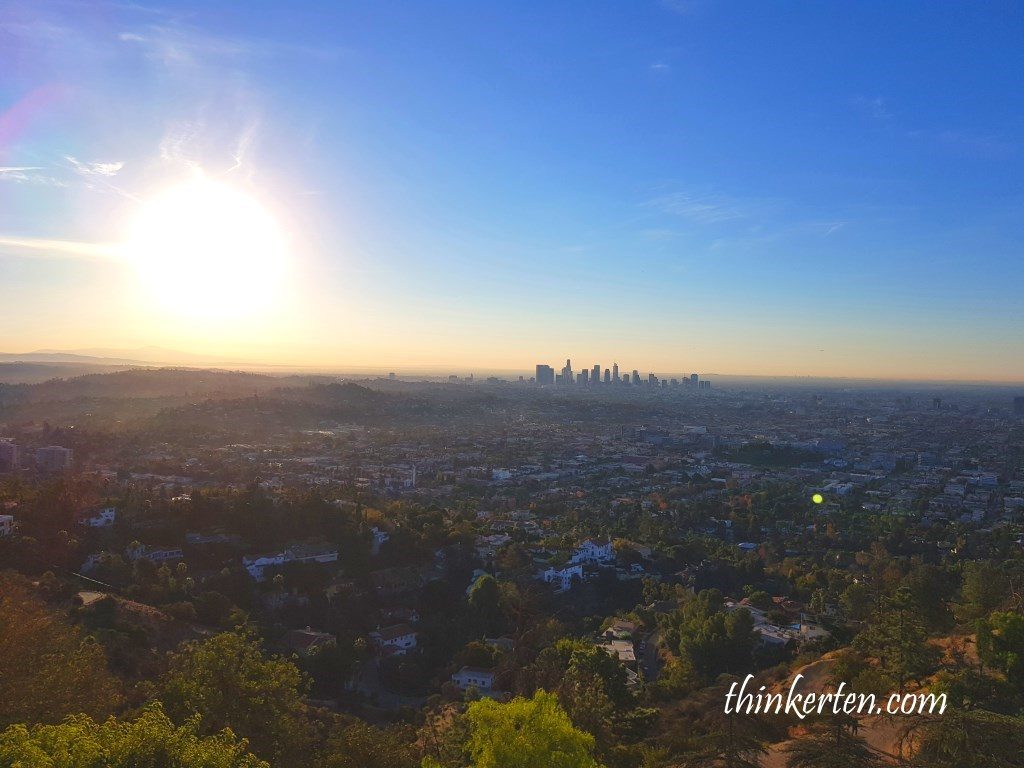 The Griffith Observatory was opened to the public on May 14, 1935.  The name took after Colonel Griffith who donated 3,015 acres of land surrounding the observatory, including the whole park area to the City of Los Angeles in 1896. Griffith’s story is kind of sad, beside being a great philanthropist, he was also charged with attempted murder, by shooting his wife on the face and left her disfigured and lost her right eyes, pretty scary right? Griffith only served two years in prison for that crime.

When you arrived at the front of Griffith Observatory, there is a Astronomers Monument stood up there. It is a concrete outdoor sculpture on the green lawn that pay tribute to six of the greatest astronomers of all time :Hipparchus, Copernicus, Galileo, Kepler, Newton, and Herschel.  Go near to see their face and see if you could recognize any of them. 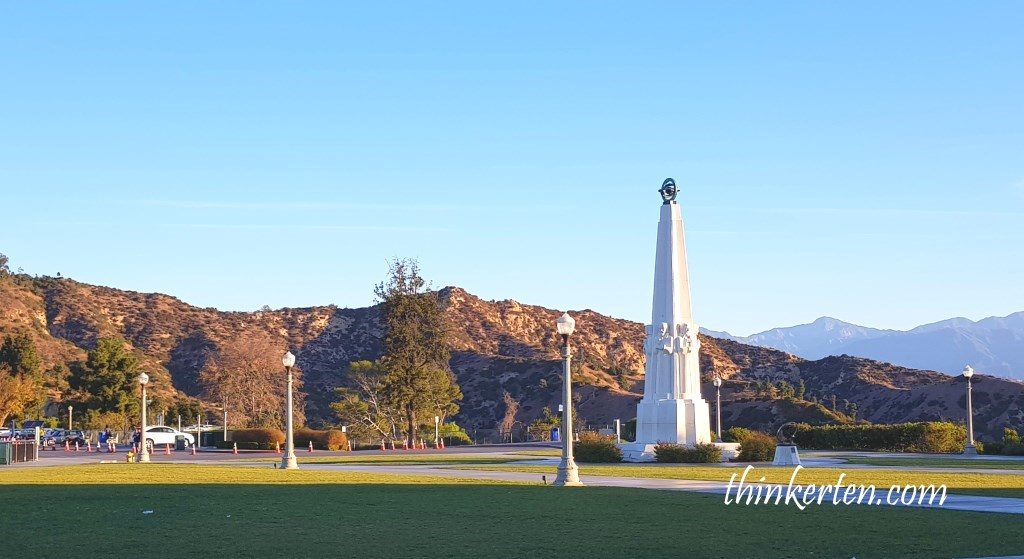 James Dean Sculpture can be found here too, simply because one of the movie show Rebel Without a Cause in 1955, captured both the interior and exterior of the Observatory in several key scenes.  Thanks to the film and James Dean, this place gain international attention!  If you don’t live that long, you may not know this guy.

View from the top is breathtaking, that is why this place is so pack especially from 5 to 10 pm.  People all rushed here to check out the sunset plus the night lights of the city.  Simply romantic!

Visitors can look through telescopes, explore exhibits, see live shows here.  You could spend half a day here. 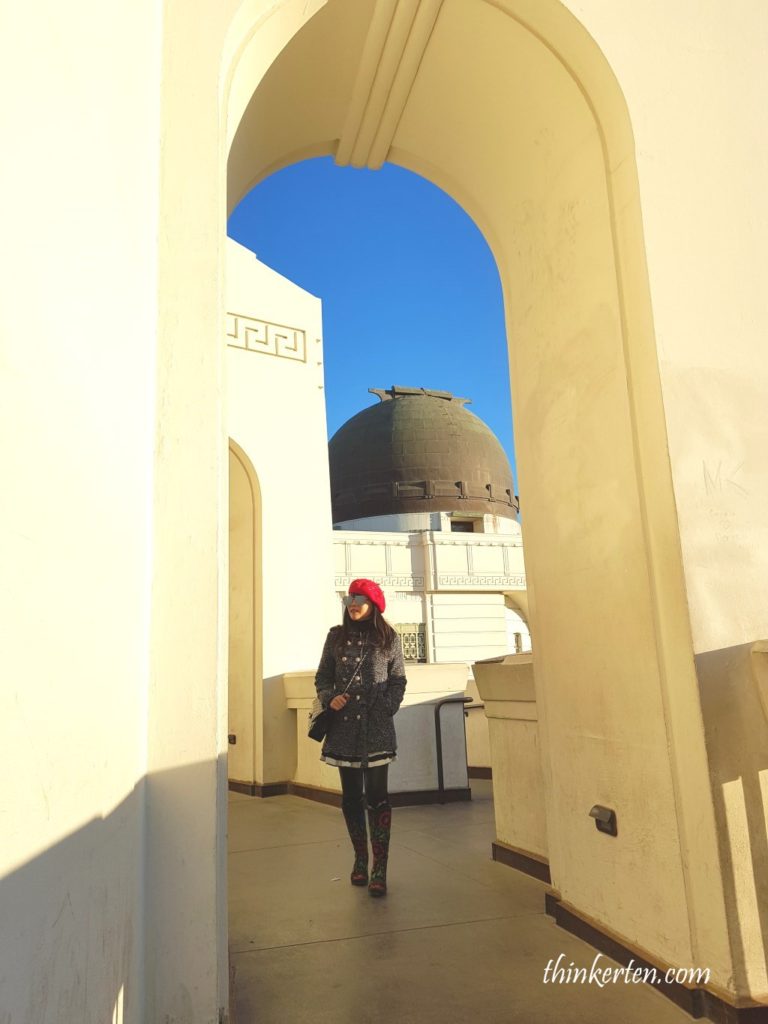 At the roof & terraces (best part), you can have the most stellar views of LA.  The entire roof also serves as a gathering place for visitors to observe the landscape around the Observatory.  This place is drone free zone so you might as well put the heavy drone at home.

If you choose to go to the planetarium in Griffith Observatory, there is a fees to pay and more educational stuff to offer.  You get to learn about space & stars and get to watch some the stars with world’s most advanced star projector! A floor to ceiling digital image of the universe bursting with galaxies & stars.

Griffith Park is about 4,210 acres of land, consider one of the largest urban park in North America. 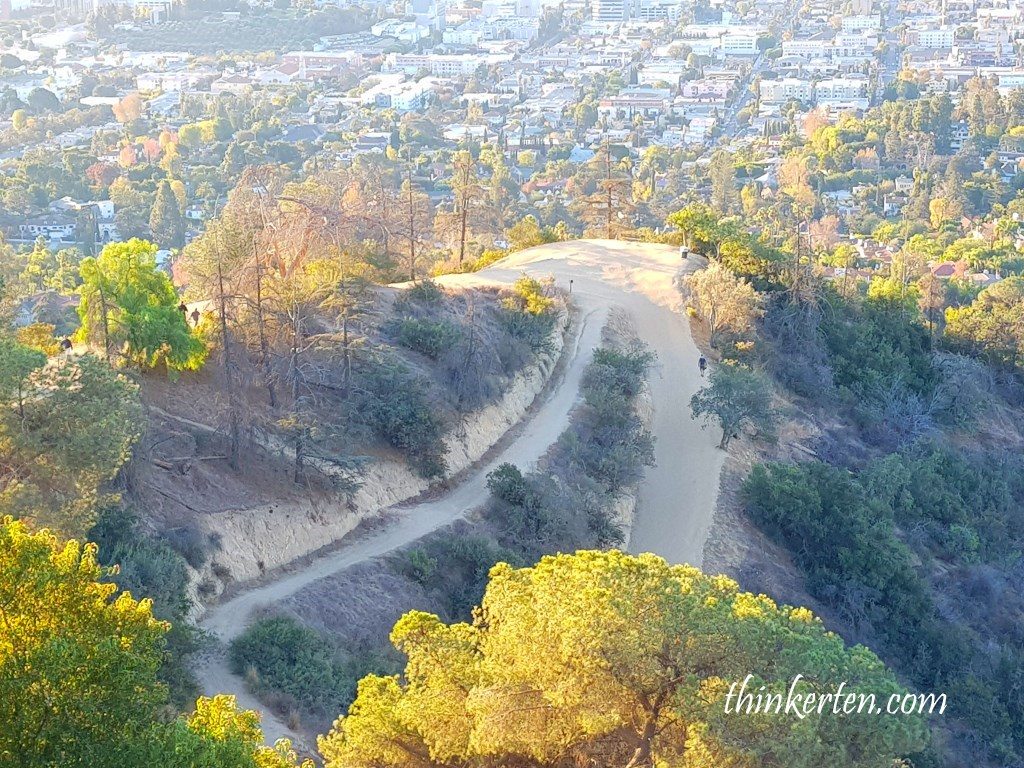 This is really a cool park for hikers or joggers, you can see the nice hiking trail from the above. 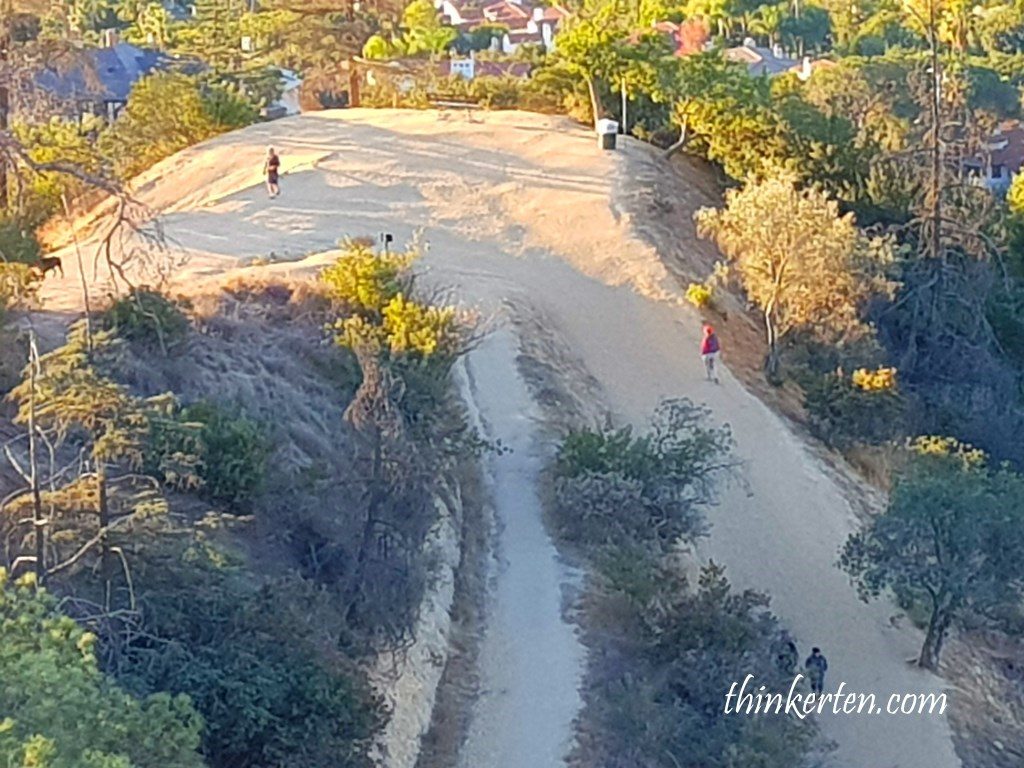 I was surprised to find a group of Korean “Azuma” having their yoga session here!  Calling them “azuma” because they speak Korean. 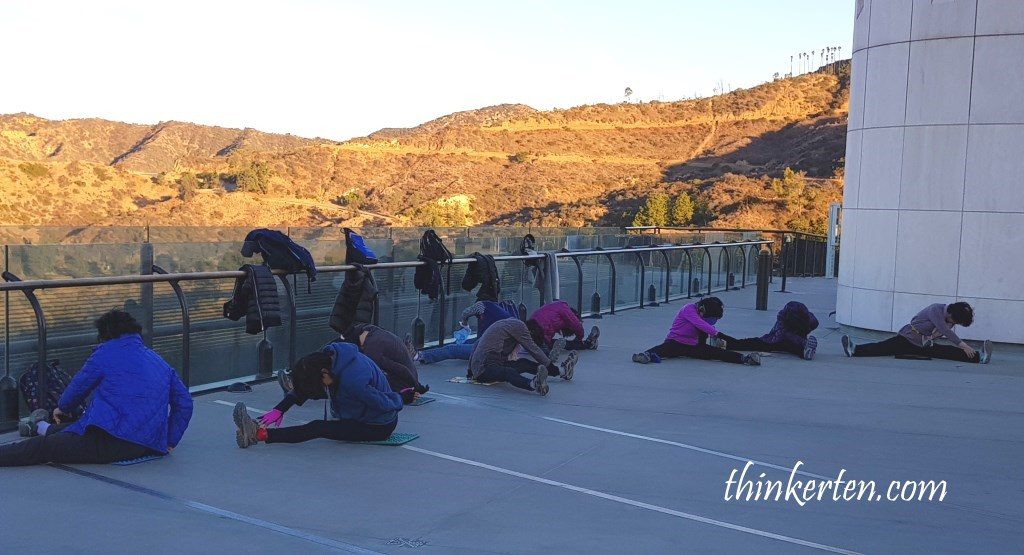 Griffith Park is still home to wild quail, rodents, foxes, coyotes, rattlesnakes, and deer. So do share the park with the rest of the animals. 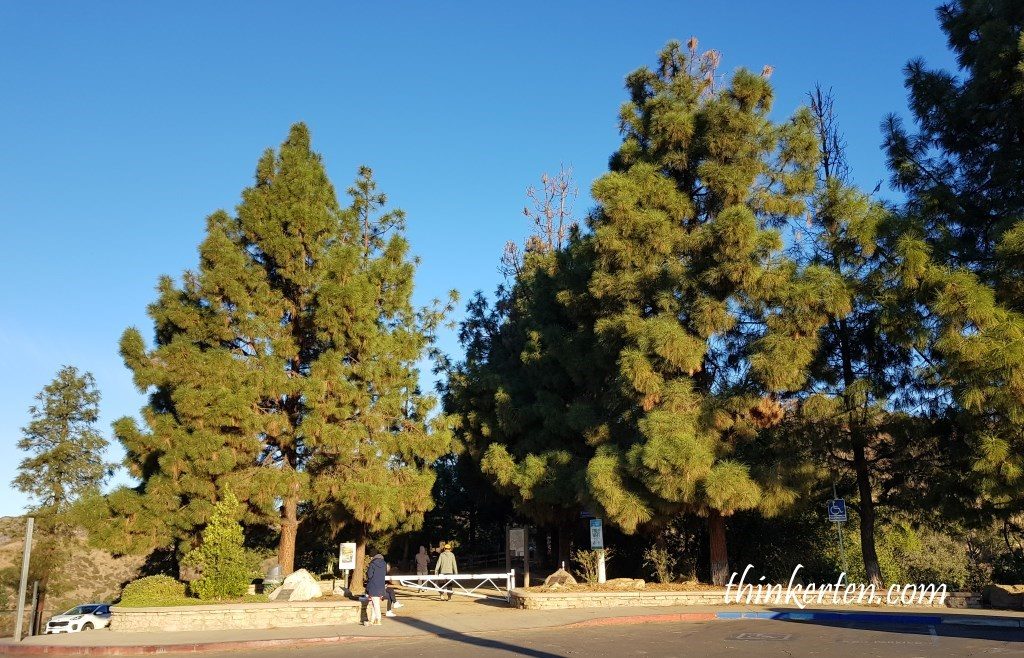 The Observatory is located on the slope of Mount Hollywood in Griffith Park, above a nice neighborhood, called Los Feliz. Going uphill or downhill, you will notice a lot of nice houses.

Los Feliz neighborhood is named after its colonial Spanish-Mexican land grantee. Yes, by listening to the name you will know it sounds Spanish & Mexican as there is “Los” in front also means “The” in English. 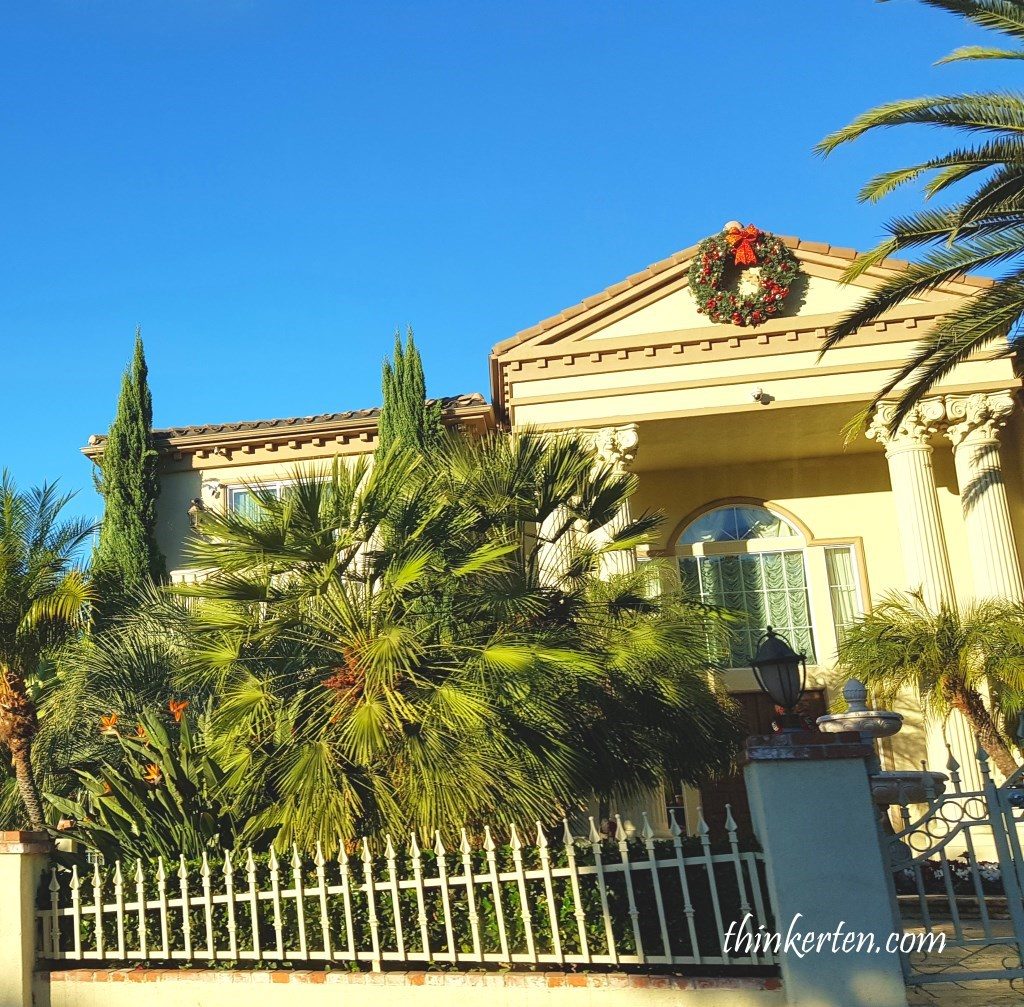 The neighborhood also home to movie stars, musicians and Hollywood elite. Well, these house look really stunning, just like the one in Hollywood movie. 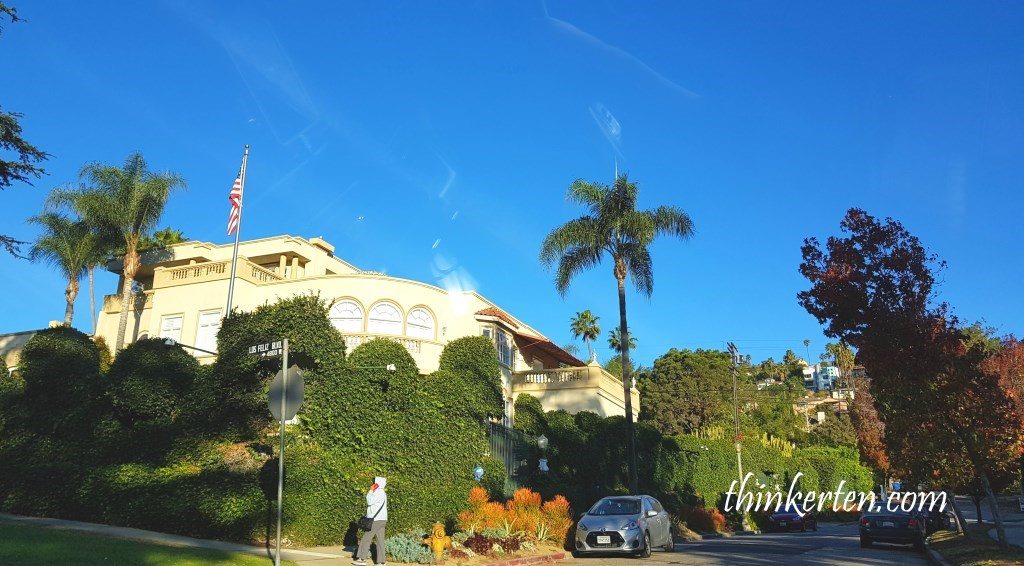 Mickey Mouse was “born” in Los Feliz Neighborhood Garage. One day Walt Disney has some inspiration and drew his first image of Mickey Mouse character in the garage of his uncle’ house. 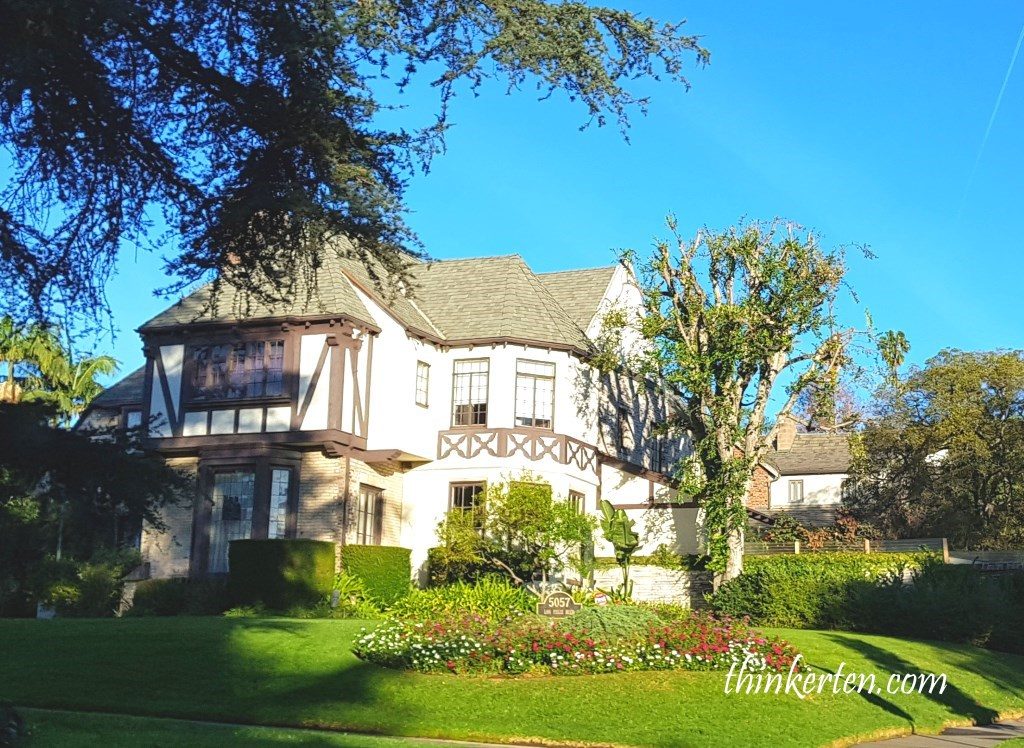 My final thought about Griffith Observatory, this is really a great and cool place to visit, regardless of how much time you have in this city. It is more than an observatory which bring so much more to the table, from beautiful skyline of the LA LA Land, to its arts & architecture of the building!  It took more than 4 years to renovate from 2002 to 2006, spending about $93 million into making the world-class Observatory after 67 years of heavy public use. I am glad Griffith Observatory is in our list of things to do in LA. 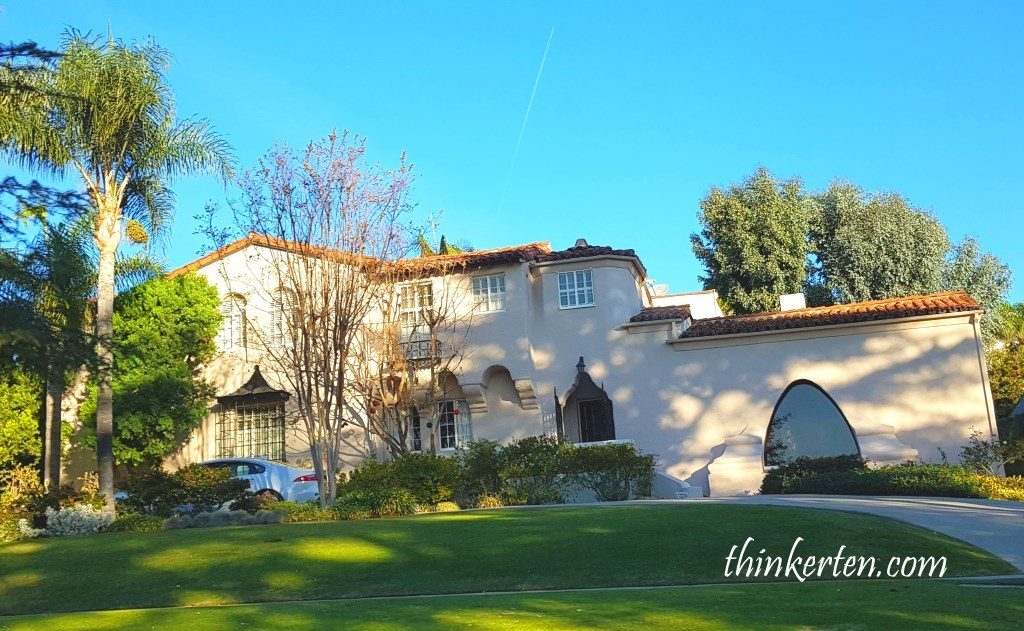 Attractions Nearby in LA :