Halfway of our Spain tour, we have reached the city of Granada which is also known as one of the birthplaces of flamenco which was named as a World Heritage Treasure in 2010.

We had arranged for a night flamenco show in a cave house high above the city. There is a bus to pick us up from our hotel to reach Albayzín neighborhood. Then we have to walk for about 5 mins to reach El Templo del Flamenco for dinner and show. 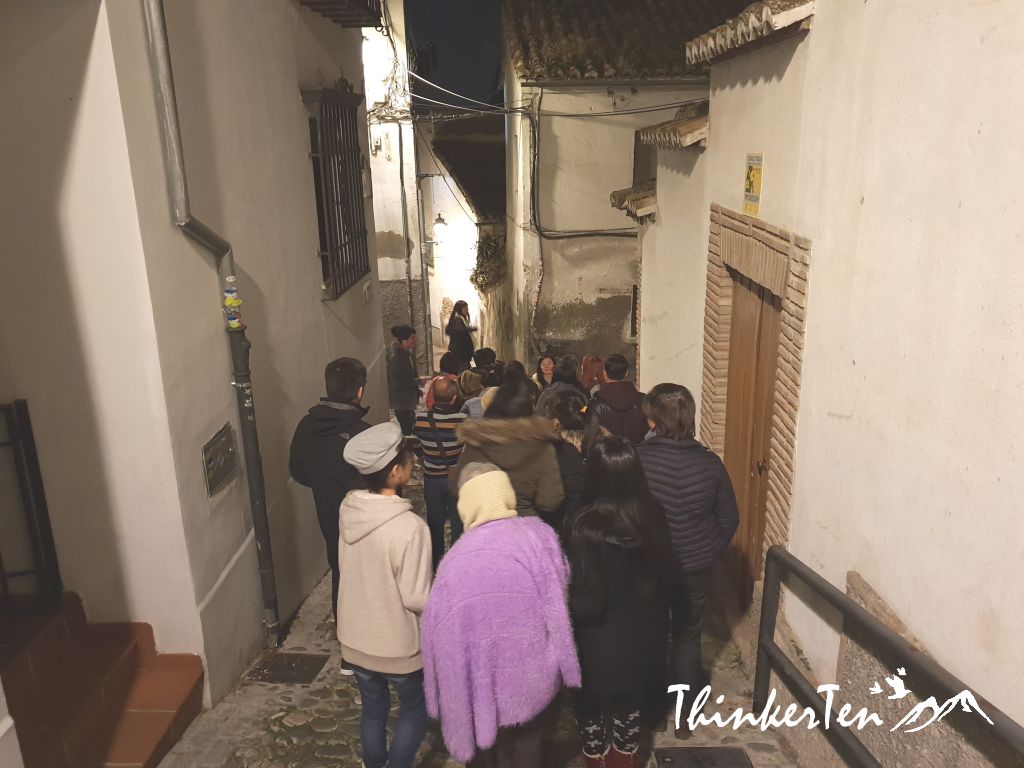 It was dark at night when we reached the Albayzín neighbourhood and I notice the neighborhood has preserved its old framework of Medieval Moorish narrow streets. The Albayzín neighbourhood was known under Muslim rule in Granada which was declared a World Heritage Site in 1984, along with Alhambra. This place is also a great spot to check out the view of Alhambra Palace. 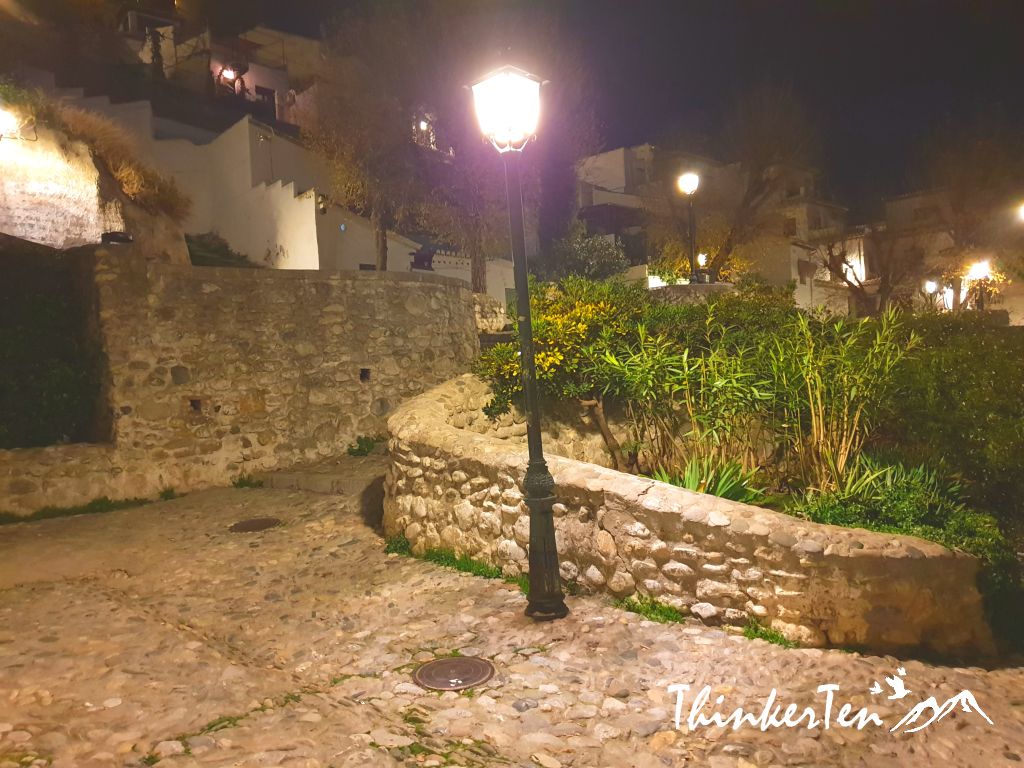 The Albayzín & Sacromonte neighbourhood contains many cave homes and our flamenco show was in one of the cave houses too. Below is the entrance to the cave house of El Templo del Flamenco. 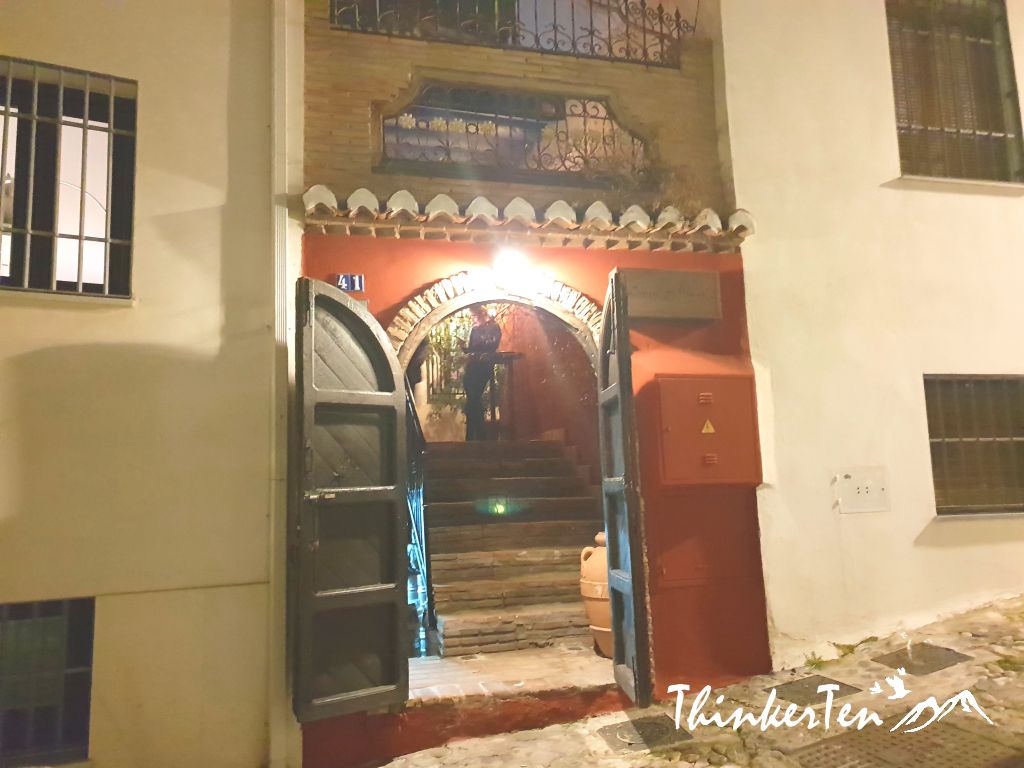 One of the characteristics of cave houses is easier to heat in winter and cool in the summer. The average ambient temperature usually stays around 20 degrees Celsius. You will notice the wall is being constructed in uneven stone. The cave house for the flamenco show is not big but very narrow. However, it feels warm and cozy. 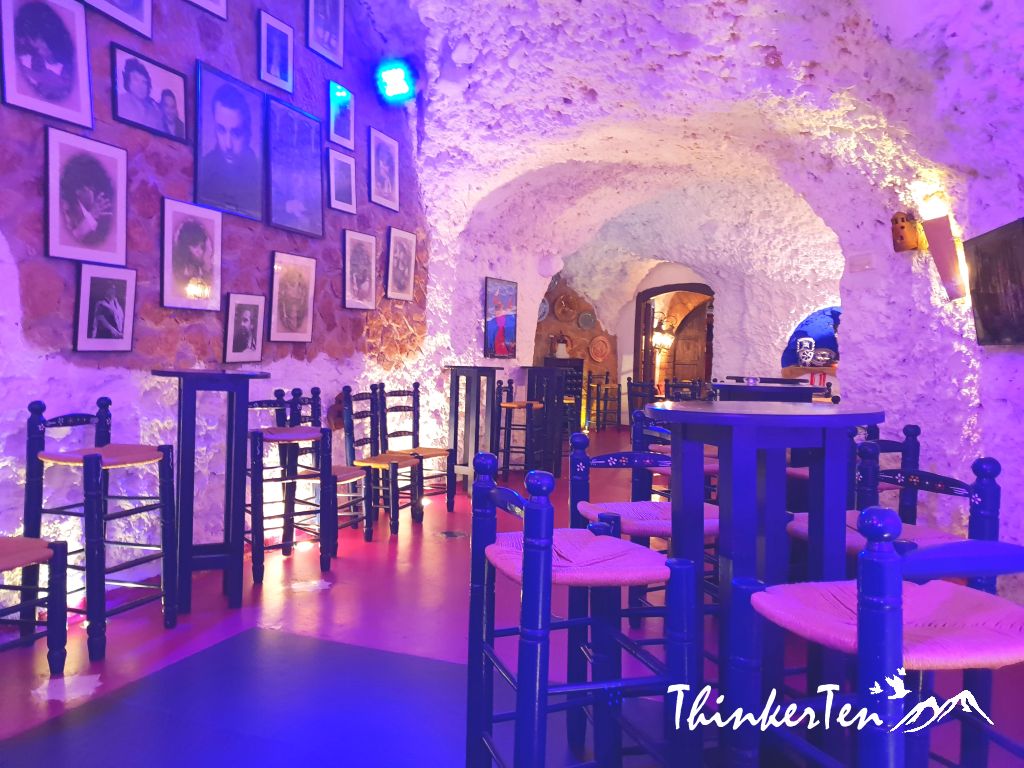 Some famous flamenco artists’ photos hang on the cave wall. 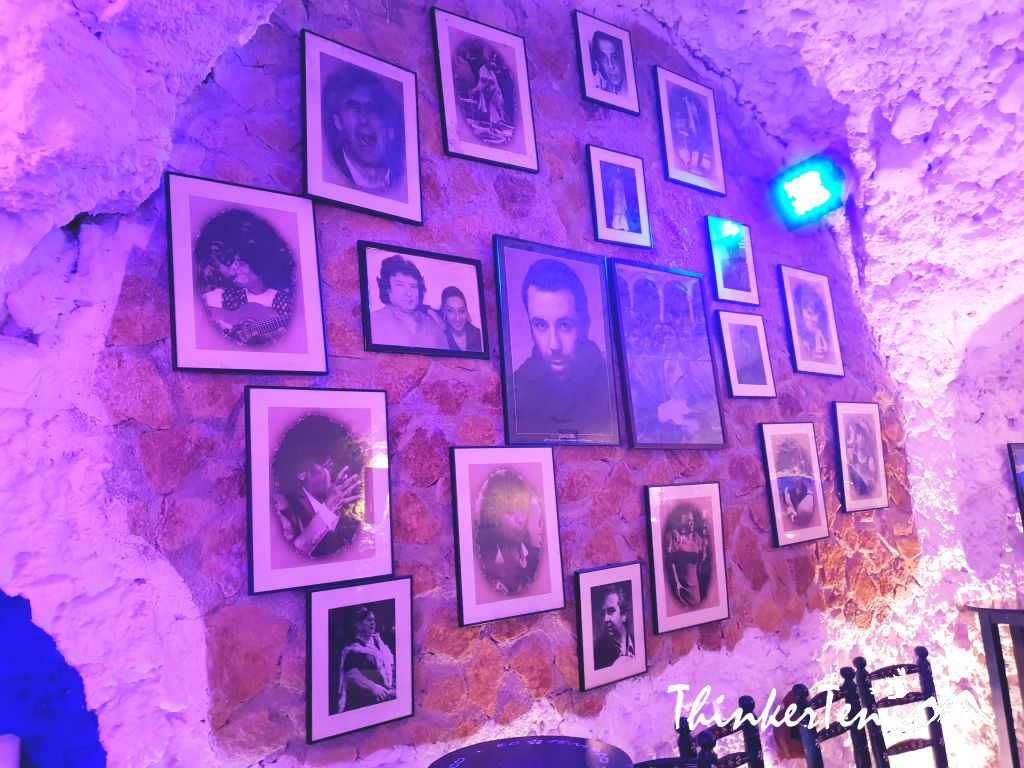 Before the flamenco show starts, our dinner was served.  I won’t say the food is excellent but decent.  We had Show + Special Flamenco Menu: 50 Euros.  The venue offers ticket options for the show with drink or a fixed price menu which features regional cuisine.

Our package allowed us to choose one drink, wine, beer or Sangria or soft drink.  I order the Spanish national drink – Sangria.  Entree is the salad with lots of raisins. 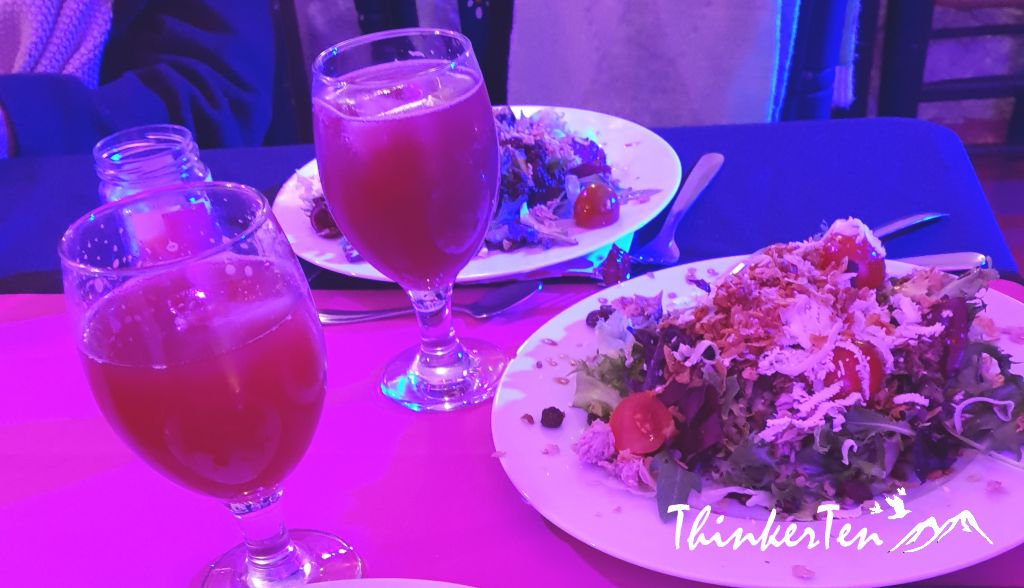 Main is the dish and potatoes. 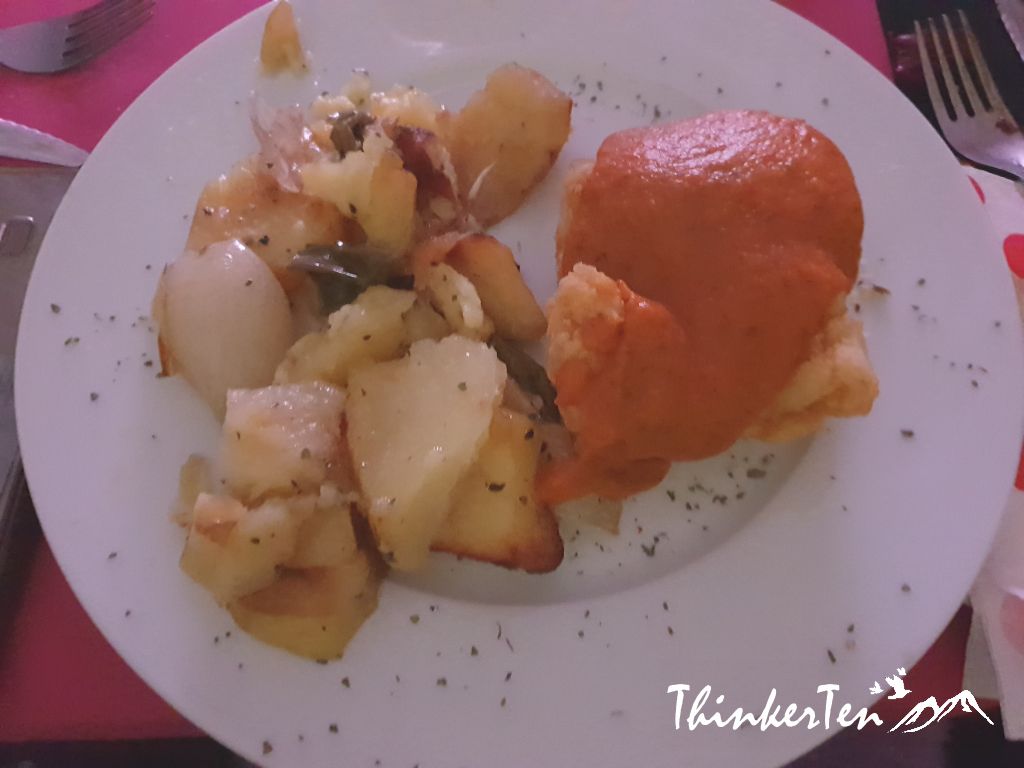 Dessert is the caramel flan, nothing too fancy.

The flamenco shows in El Templo del Flamenco are lasting one hour and fifteen minutes with six artists which include 3 men and 3 women.

Flamenco usually has guitar music, singing, handclaps, heel stamps, castanets. It is danced by a man and a woman in traditional Spanish costumes. It has both fast and slow tempo but rising to a climax near the end. With roots in Indian, Arabic and Spanish culture, flamenco dance is known for its sweeping arm movements and rhythmic feet stomping. (Some believe flamenco to be the invention of the gypsies).

Who are the gypsies? Gypsies are believed to have arrived in Europe from northern India in the 1400s. They were called Gypsies because Europeans thought they came from Egypt. Their skin are slightly darker and have darker hair.  Gypsy often move around and have a nomadic lifestyle. 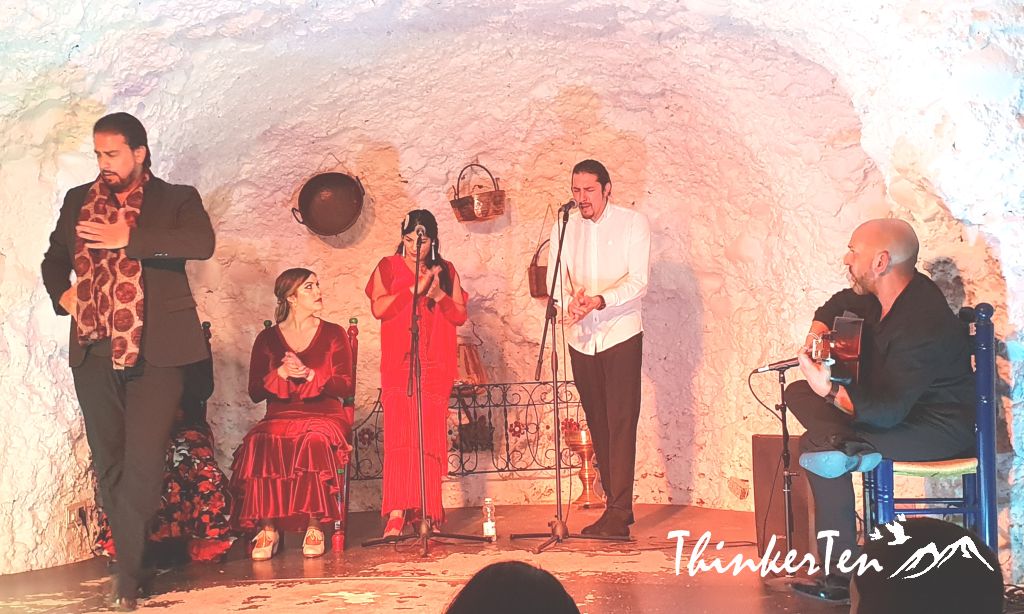 You will notice the flamenco dancer show an expression of deep emotion and it creates a connection with the audience.

Flamenco singing (Cante is the vocal expression) are passionate, intense, deep and emotional. It is often sung of sorrow, heartache, and lost love.  It is also an important element of flamenco music!  The song is sung in a mixture of Andalucian Spanish, Romany, and the gypsy language which is thought to derive from the ancient Indian Sanskrit. 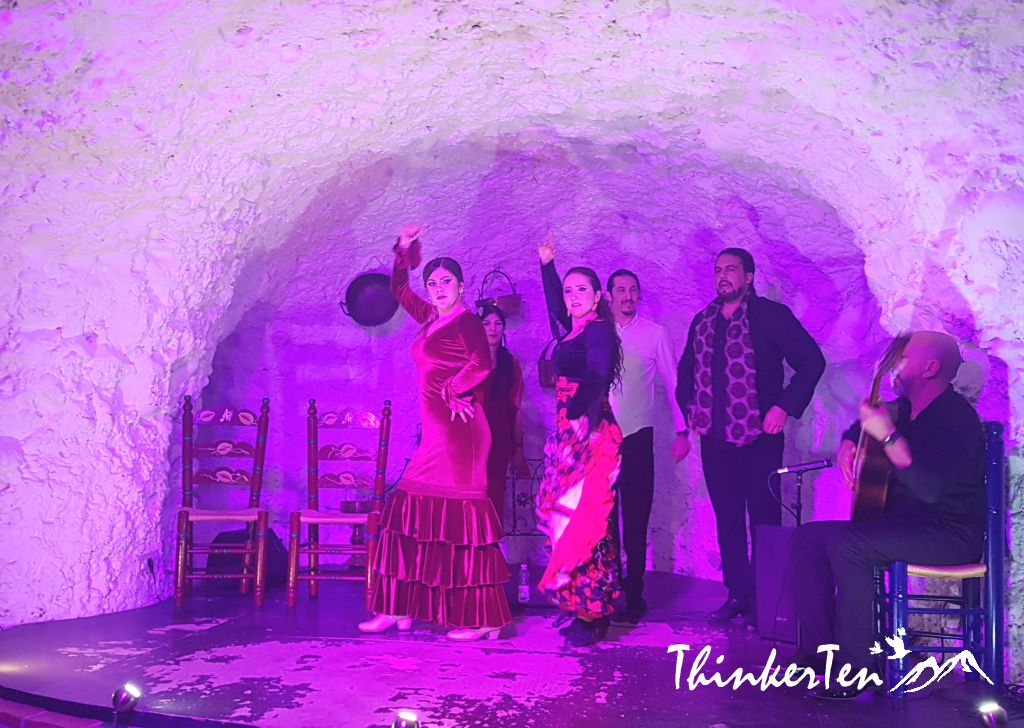 Deco in the Cave House

At the little bar corner, I notice some Spanish decor with a vibrant and colorful design style – the Spanish Ceramic Plates. 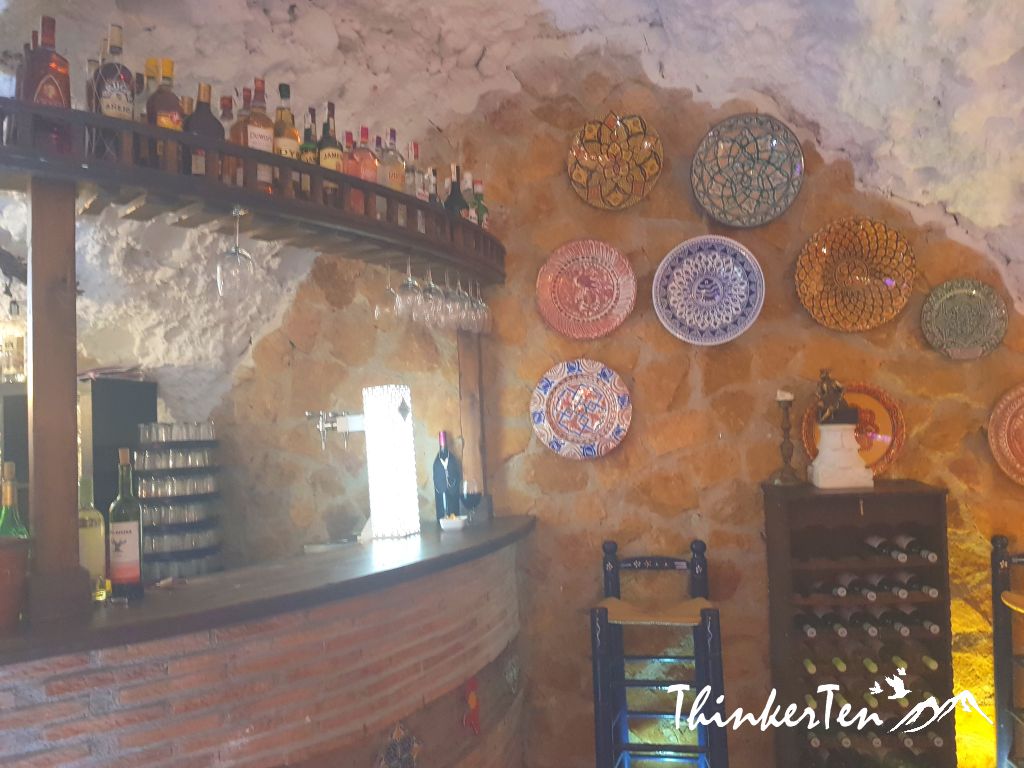 Little Altar in the cave house 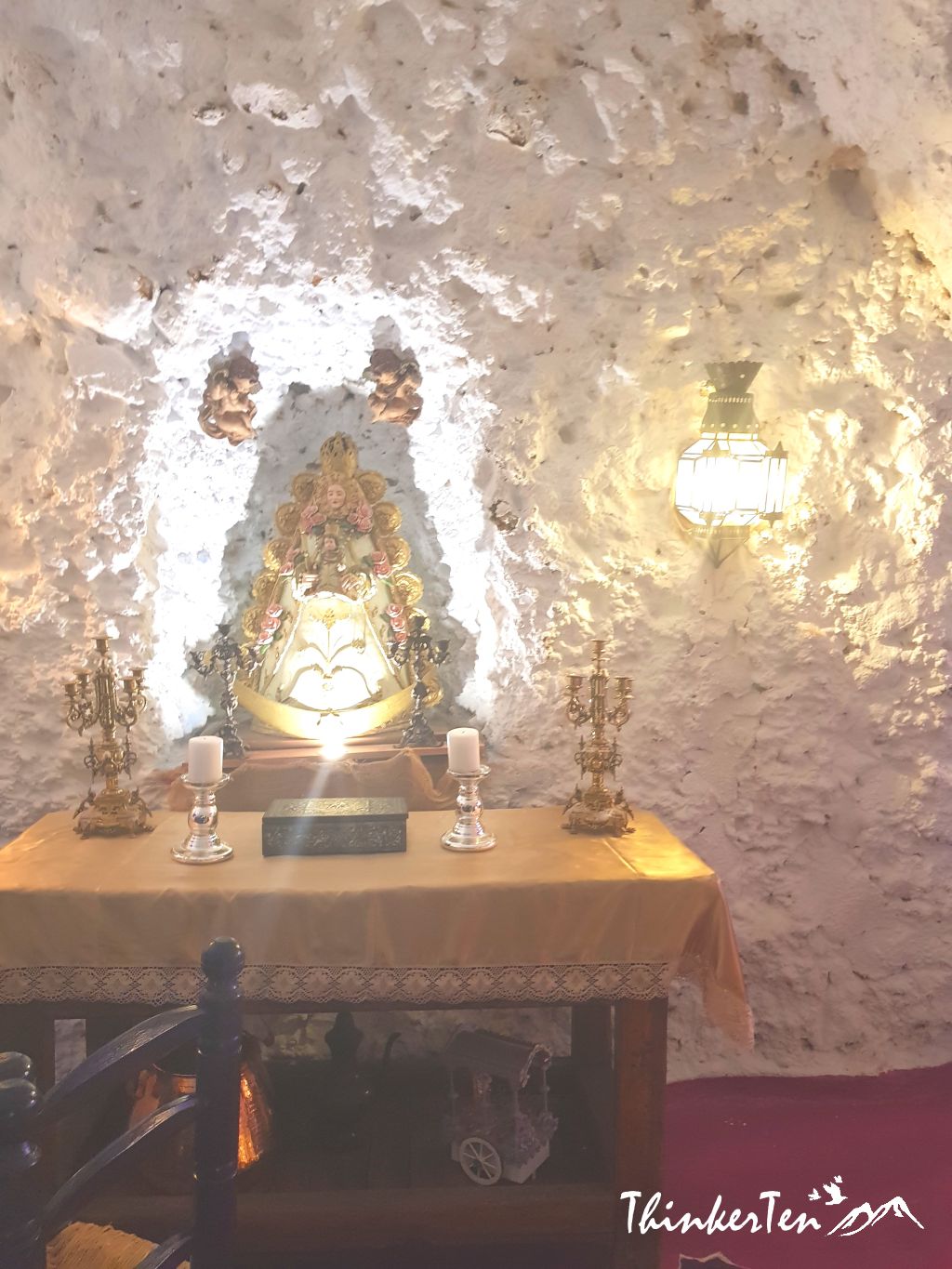 The stage is located strategically in order to offer a perfect view from each corner of the venue. 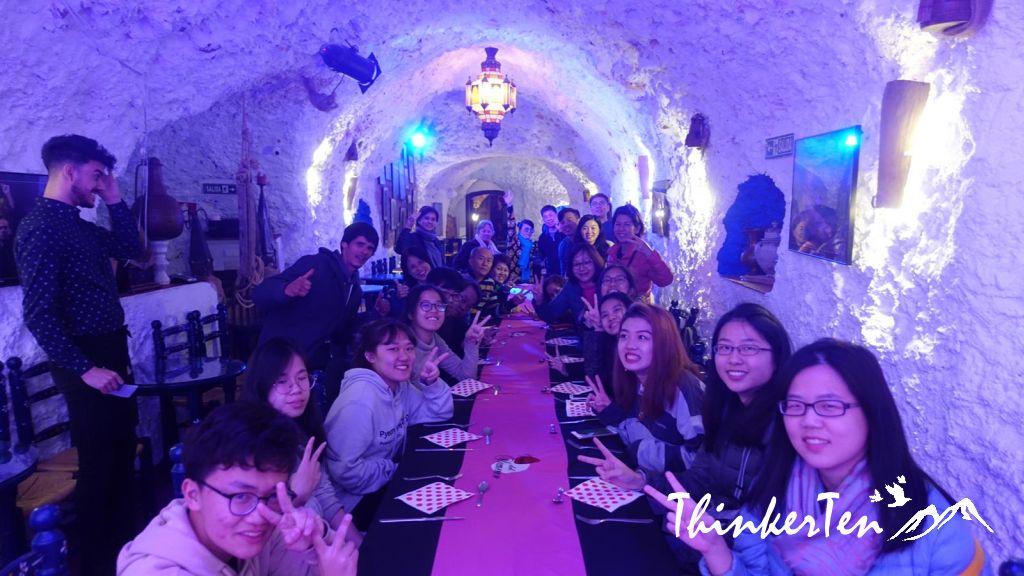 The fact that the restaurant & show takes place in a cave really adds to the incredible atmosphere. Overall, the experience was wonderful. The flamenco show was outstanding, the location is very unique and the dinner is good.  Highly recommend this place – El Templo del Flamenco! 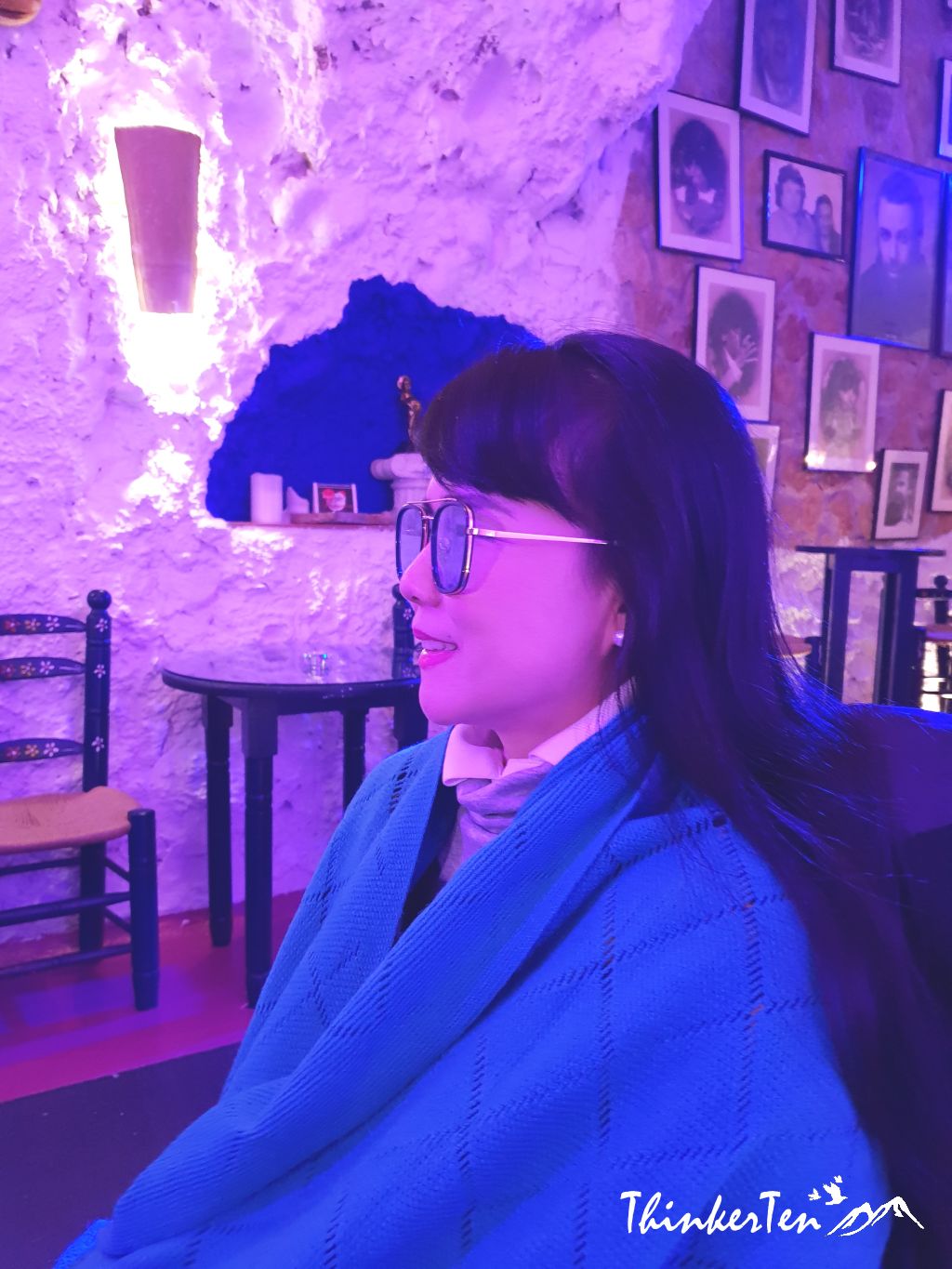 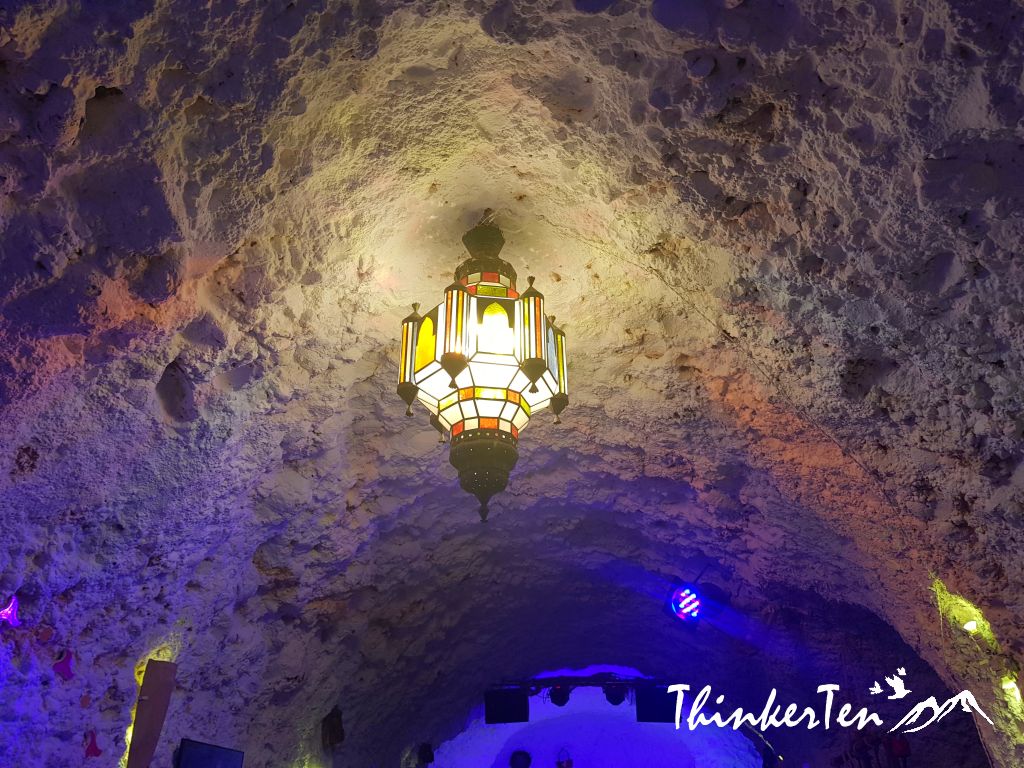 Flamenco is a bucket list when you visit Spain and watch it in a cave house adds up to the whole experience.

I would love to see that in person one day. Flamenco is a beautiful dance. It’s so amazing to watch!

I agree, the dance is so passionate, intense and deep.

I have seen flamenco dancing so much throughout my years and it just never gets old. So passionate and inspiring. Thank you for sharing the video, I loved it!

This looks like a place we’d enjoy going to. If we’re ever in the area, we’d definitely check it out.

I love Flamenco shows! I need to get back to Spain. I’ve seen so much of these and it seems to never go out of style! Love the video,

This must have been an amazing show!!! We missed it last time we were in Spain…Next time for sure.

This seems like an awesome place to visit. The cave house for the flamenco show seems very cozy.

The cave house isn’t big but very cozy and great atmosphere for a flamenco show.

i’ve never been to a Flamenco show! this is such a cool experience!

Seeing a live flamenco show is really an awesome experience.

Thanks for your detailed review of the best place to watch the flamenco show and sharing about the food and the location too. I have not been to Spain but would love to head there someday

How wonderful it would be to see a Flamenco show. This reminds me of my MIL. She loved that kind of flair and she definitely had it herself. I’d love to visit Spain too!

I love the fancy dress too, flamenco looks so pretty, especially with the polka dot version. Haha.

I love Spain, but have never been to Granada. Looks like a beautiful place and love your photos!

Granada is one of the important city in Andalucia region Spain. Flamenco is the origin of Andalucia and Granada is a great place to watch.

How fun! I bet watching the flamenco dancers live is such an experience…I’d love to attend a show!

Watching live of a flamenco show is simply amazing, I thought it is only about dance but actually, there is also flamenco cante too- that is the flamenco singing, the way they sing is also very unique. You feel the passion!

Wow I swam in a cave but never seen a whole performance in one! This is an amazing unique experience!

I really enjoy the cave experience! Granada has so many cave houses and it is interesting to see the interior of the cave houses.

That must have been such a cool experience to see flamenco this way! Thanks for sharing.