I went for a short getaway in Forest City, JB Malaysia during the weekends and stay over in the Phoenix Hotel in Forest City. It is really an eye-opening to see the multi-billion-ringgit Forest City project built from scratch which was just started in 2014. It was said the city was built to be the “next Shenzhen”, just 10 minutes by car from Malaysia checkpoint, second link Tuas. But it took us more than an hour to clear custom from Singapore on a Saturday morning. We left at 8 plus in the morning.

Forest City is a luxury development which is made up of artificial island and coastlines., it has a residential, office, shopping malls, and data centers. Just like the Chinese said, it is a “win-win” project which will benefit all. Well, except the local fishing village who depends on sea activities. It has affected fisherman daily catches and fewer fishes now.

The developer intends to have 700,000 residents living in Forest City and this project will last 30 years so there still have over 20 more years to make this happen. During my visit, I saw quite a lot of residents mainly from mainland China has already resided in Forest City. Most of them are retired grandparents & young children as I seem them hanging around in the shopping streets. However, the buyers are not only from China; I also noticed there are Korean and Middle Eastern folks.  It was said that so far, the apartments sold to people from 23 countries, including Malaysia. 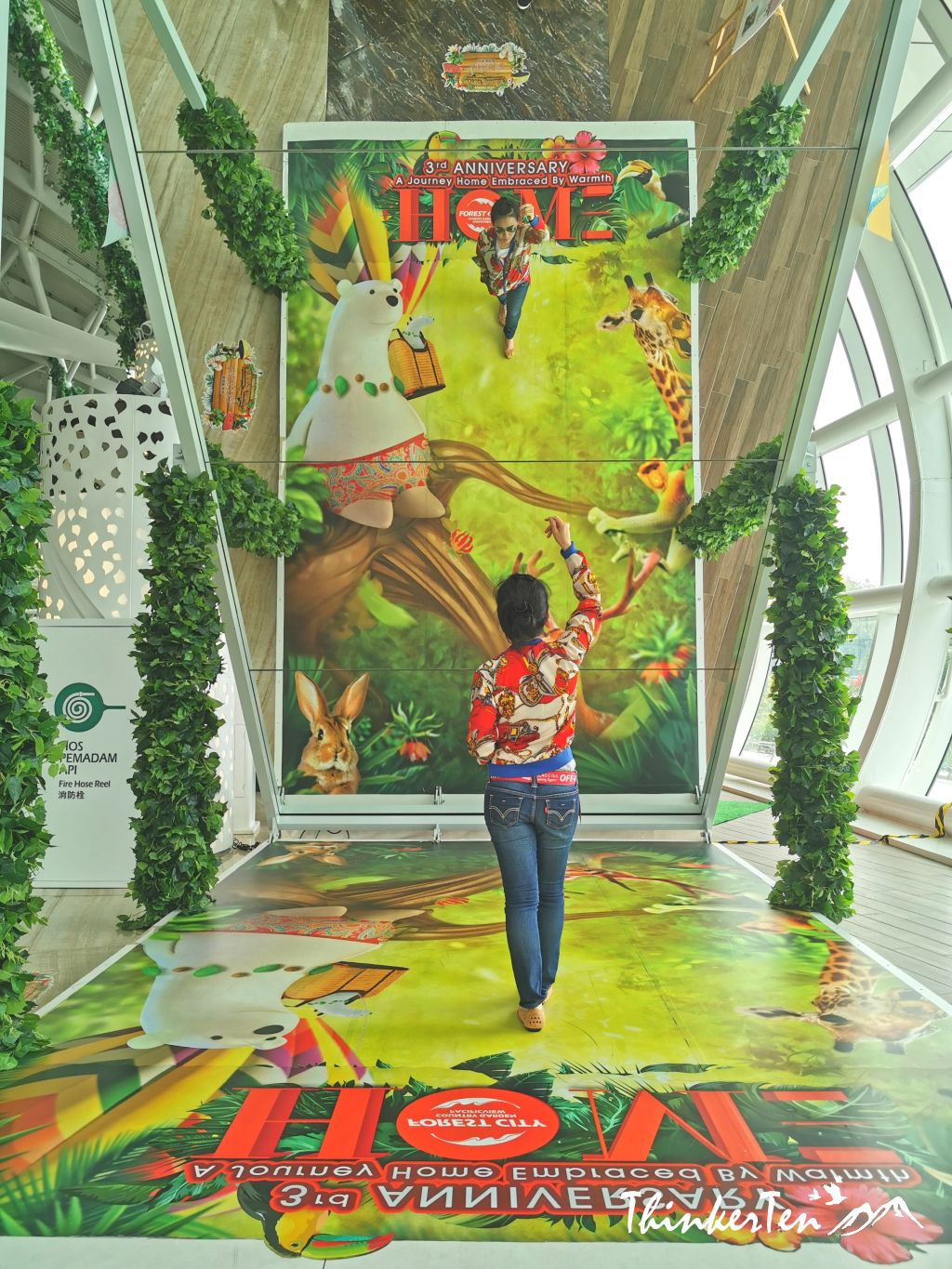 When we arrived we check in to the Phoenix Hotel immediately. It was before 12 pm noon but the front desk gave us an early check-in. As of now, there are only two hotels in Forest City (expect more hotels over the 30 years of time frame).  The Phoenix Hotel is located near the shopping street and Eatery Street. The other hotel is the Golf Hotel which is great if you are into playing golf as there is an 18 hole golf course.

Click on the link above if you wanted to know more about the hotel & price.  There is a sky bar at the top of the floor which is quite cool and romantic. 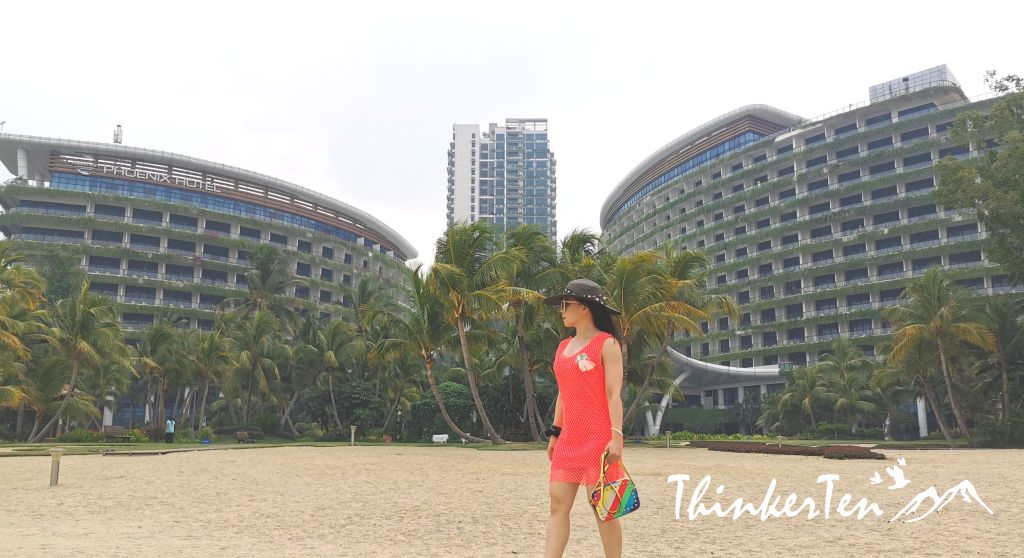 As I mentioned earlier, the good thing if you choose to stay in the Phoenix Hotel is the shopping streets and the restaurant is just next to the hotel.  We parked our car (underground carpark) in the hotel and walked over to check out the shopping street or they called it Fisherman Wharf Commercial Street.  It is an open-air concept mall (which is a good thing as it saves energy) with 70% of the shops already in business.  However, each individual shop has air-conditioned inside the shop. 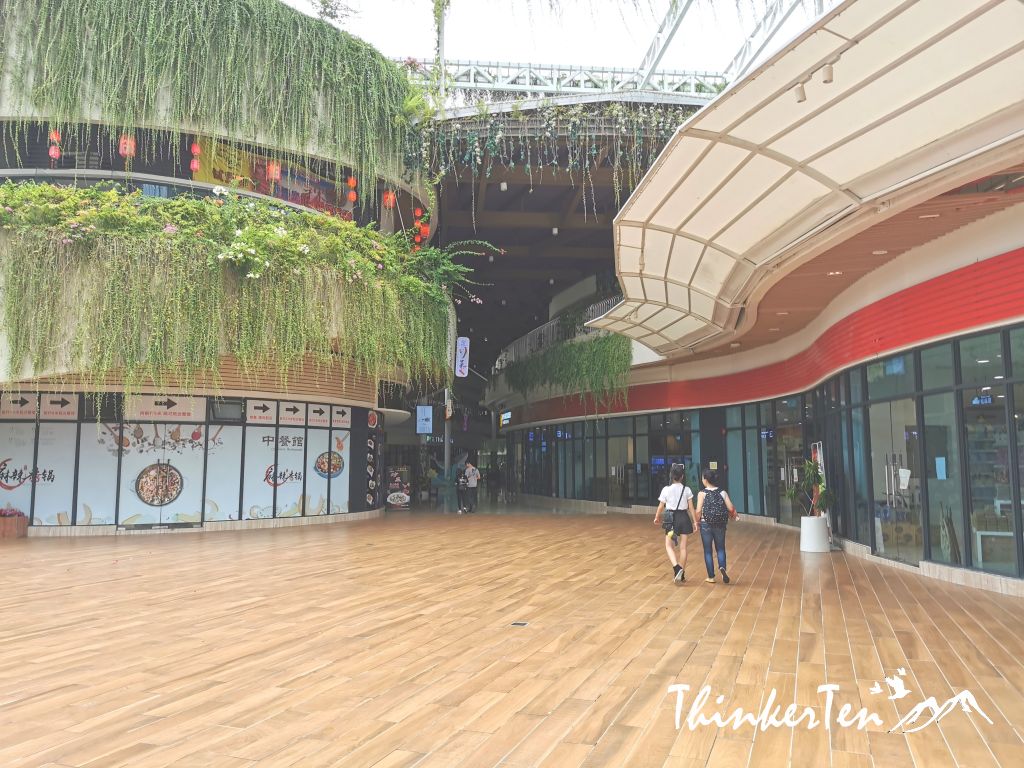 The good thing about the shopping street is there are several duty-free shops. Forest City is a duty-free zone! I notice there are so many locals rushing here for alcohol! Click on the review to read about the price for some these beers. 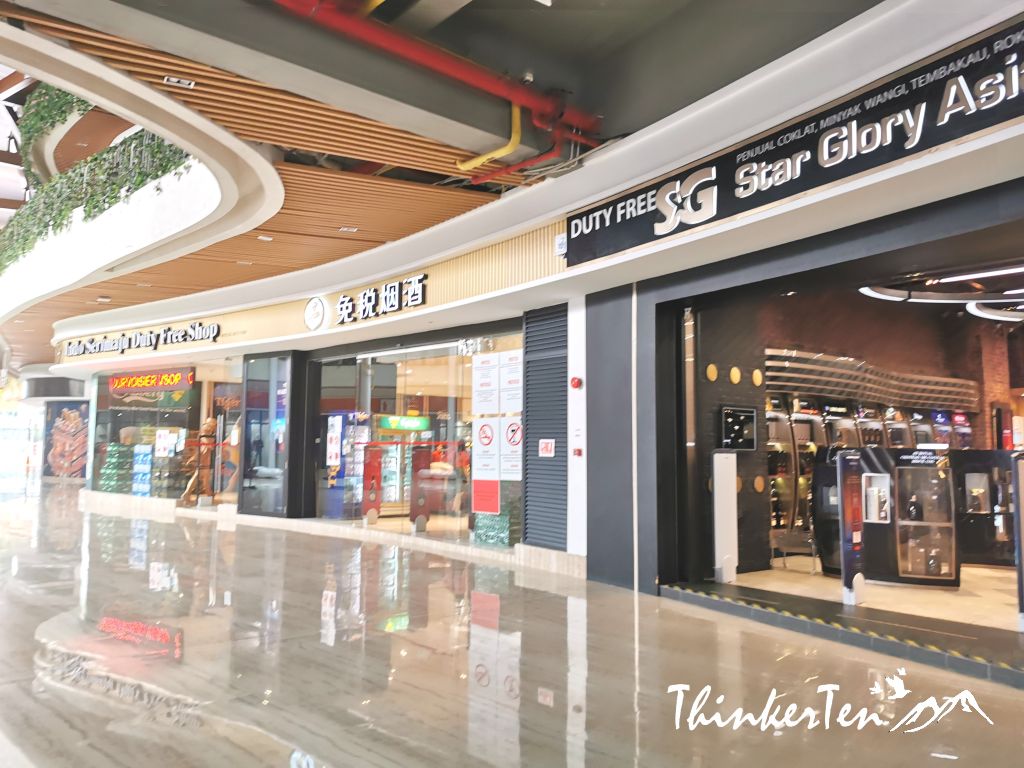 Eatery Street is the same place for the transport hub, there are less than 20 shops, mostly selling Chinese cuisine from different parts of China, such as Shanghai, Hunan, and Shaanxi.  You can even find Shaanxi (Xi’an) “Biang Biang” noodles here.  Click on the above to read more about the eatery street in Forest City. 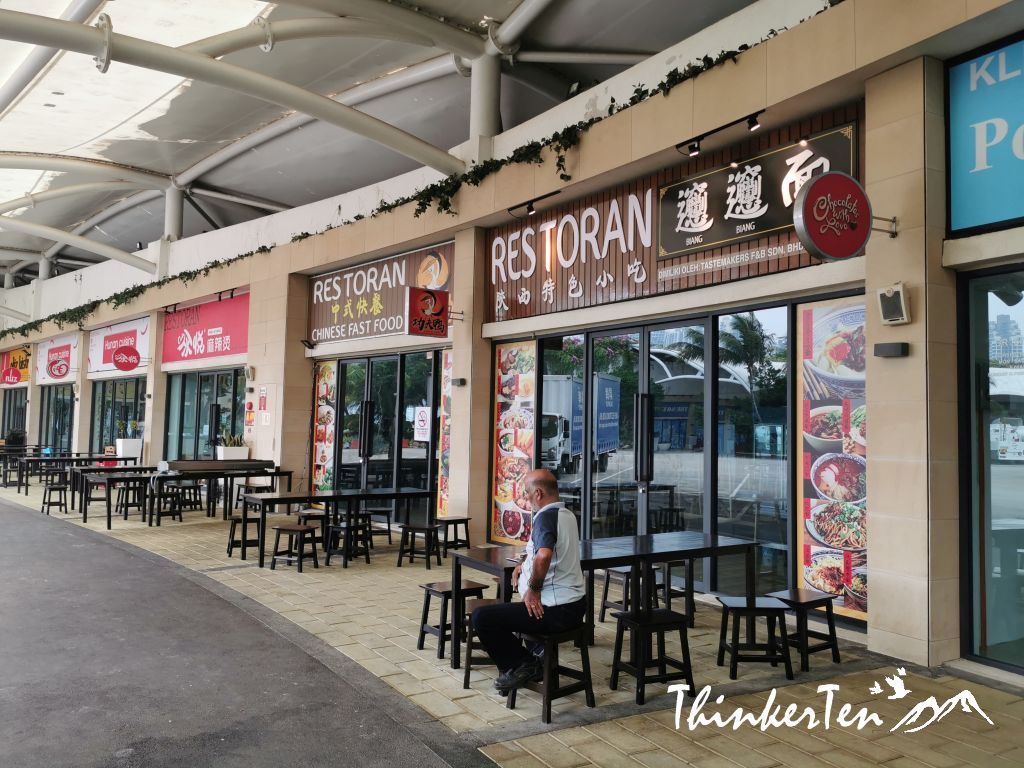 Carnelian is the landmark in Forest City, you see the unique shape the moment you drive in this land. It is the first tower built and two more to come, in total, it consists of 3 towers. It is a 45-story mixed development for office use, residence, 5-star hotel, and commercial center. It wasn’t open yet during my visit in September school holiday 2019 and you can see the tower is still wrapped with green plastic, it was said to open in 2020, so very soon. 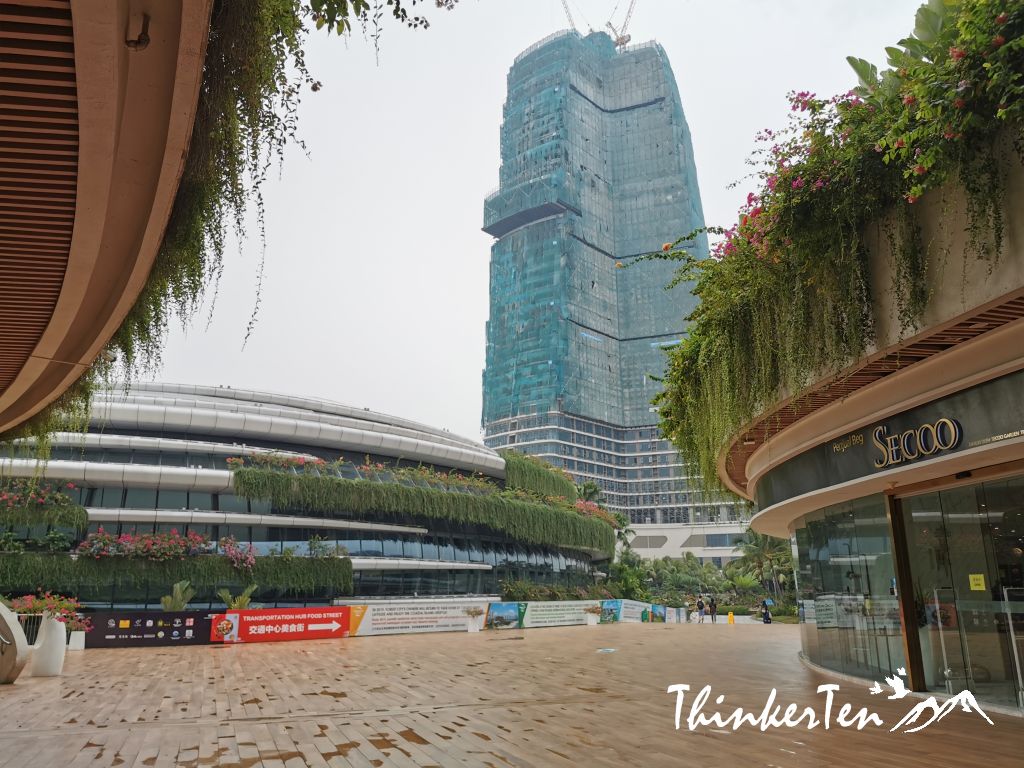 The sales gallery which includes the whole plan of the city is located in between the Shopping Street & Eatery Street and Transport Hub. 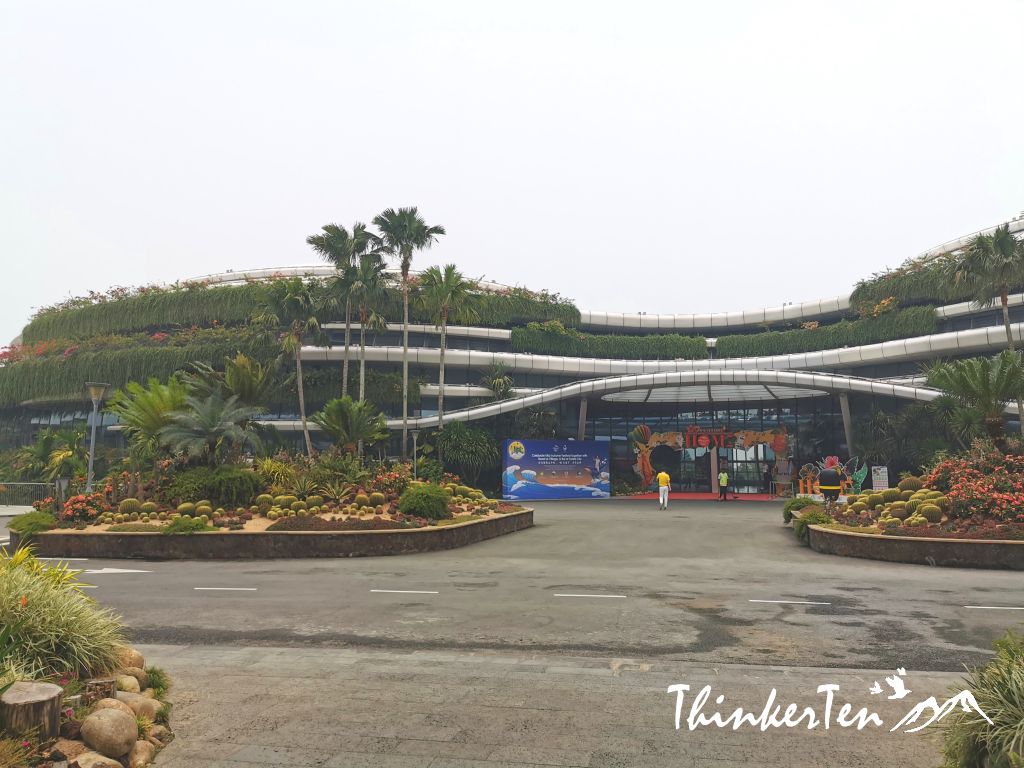 The spacecraft shape building is Forest City’s show gallery. It has the whole exhibits and mock-up flats for potential buyers to visualize the whole city and the environment. They even have lots of entertainment to keep young children occupied so adults can concentrate and focus on the sales talk. 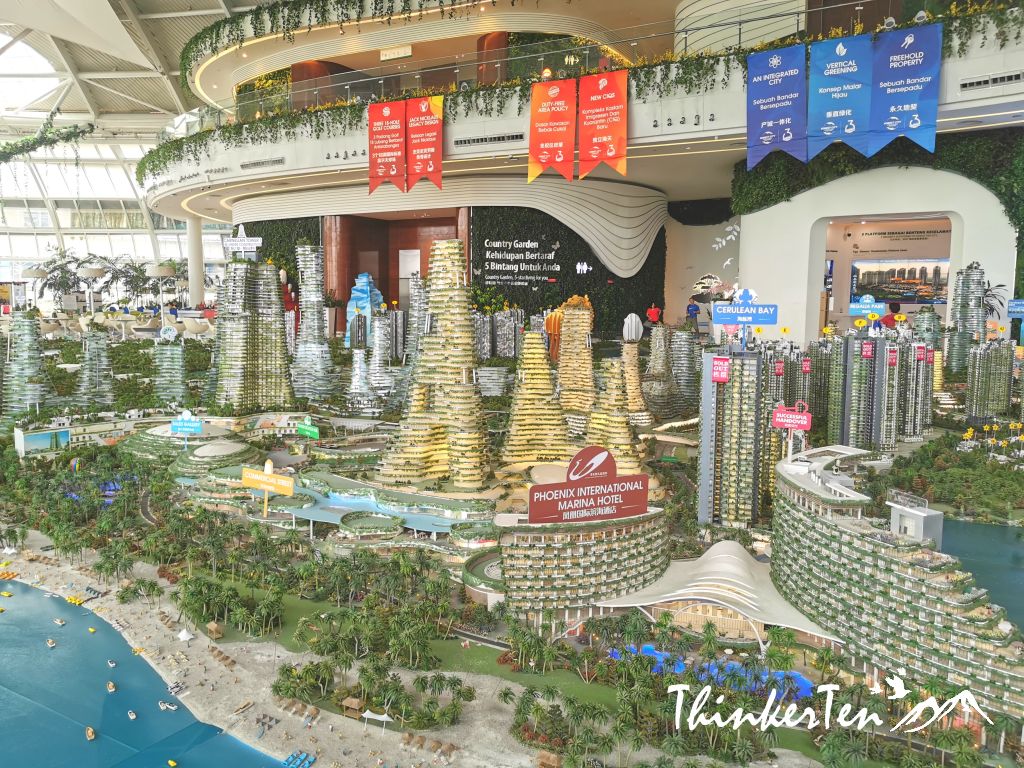 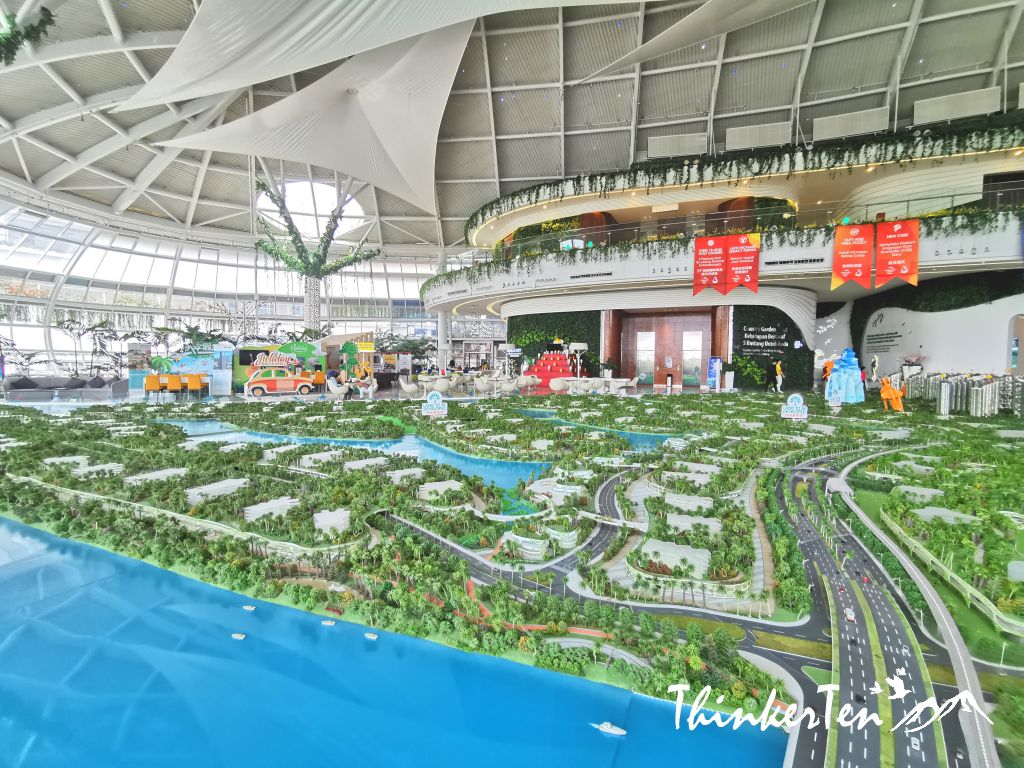 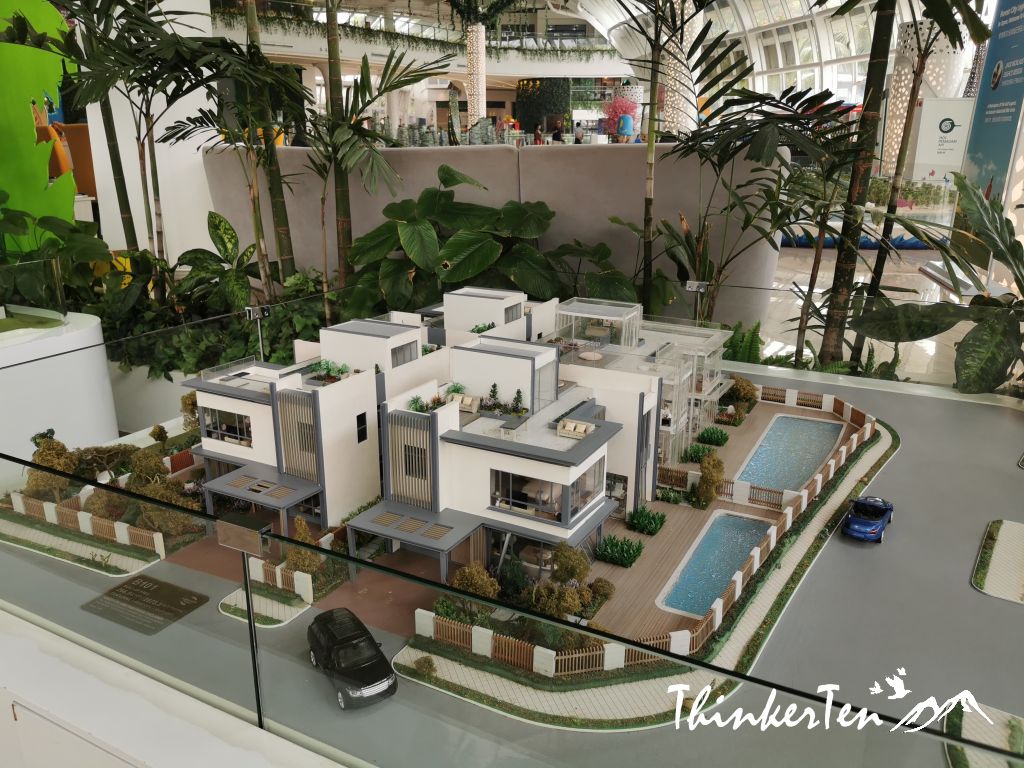 Manicured Gardens are seen everywhere in Forest City compound, various plants are imported, including cactus from America and other parts of the world.

The man-made beach faces Singapore, it was hazy so you can’t get a good view of Singapore. We went for a walk at the beach in the evening, seen some locals and tourists here relaxing and walking on the sands. The sands aren’t soft enough in case you are walking with barefoot. 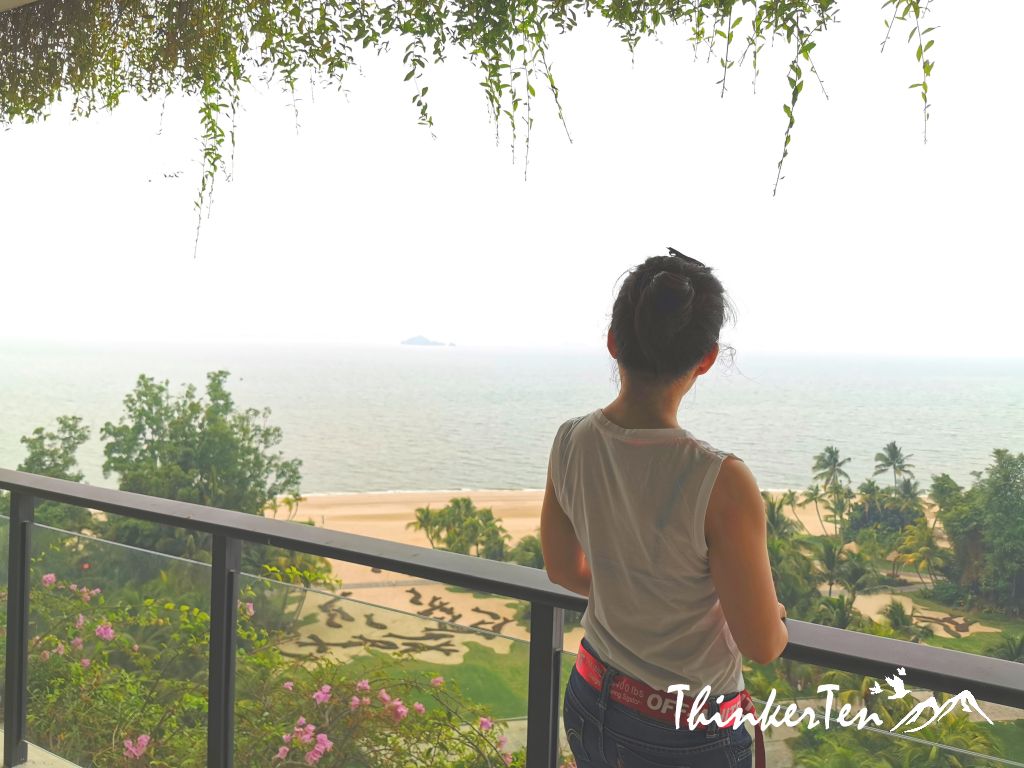 I have spoken with the pharmacist in the drug store in Fisherman Wharf Commercial Street, they opened the business only 4 days ago and the business was unexpected good for the past 4 days.  They were surprised and I was too as I didn’t see the crowd during the day.

I look at the housing apartment from my hotel room when it gets dark at night, there are about 20% of the occupancy rate. 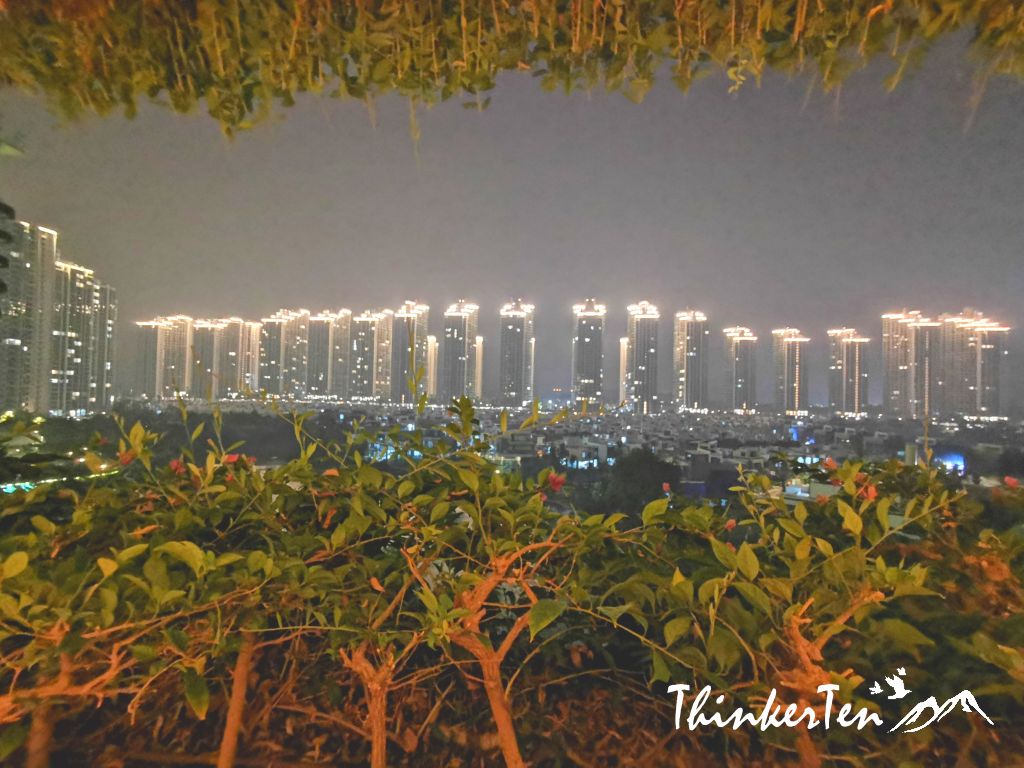 There is a security checkpoint when you enter Forest City, they do not ask us to stop our car to check on ID.  So most of the car can just go in freely.  There is also a check at the exit with two lanes shown – Something to Declare and Nothing to Declare.  I think they will check on the duty-free goods on the way out.

All the security are from Nepal and these batch of Nepalese guards are friendly and polite.  Seem very well-trained. In addition, they have a clean & tidy uniform which made them looks very professional.  At the end of the day, it provides good image to the potential investors when they visit Forest City.  I have spoken with one of the security and learn that they speak and understand English too. 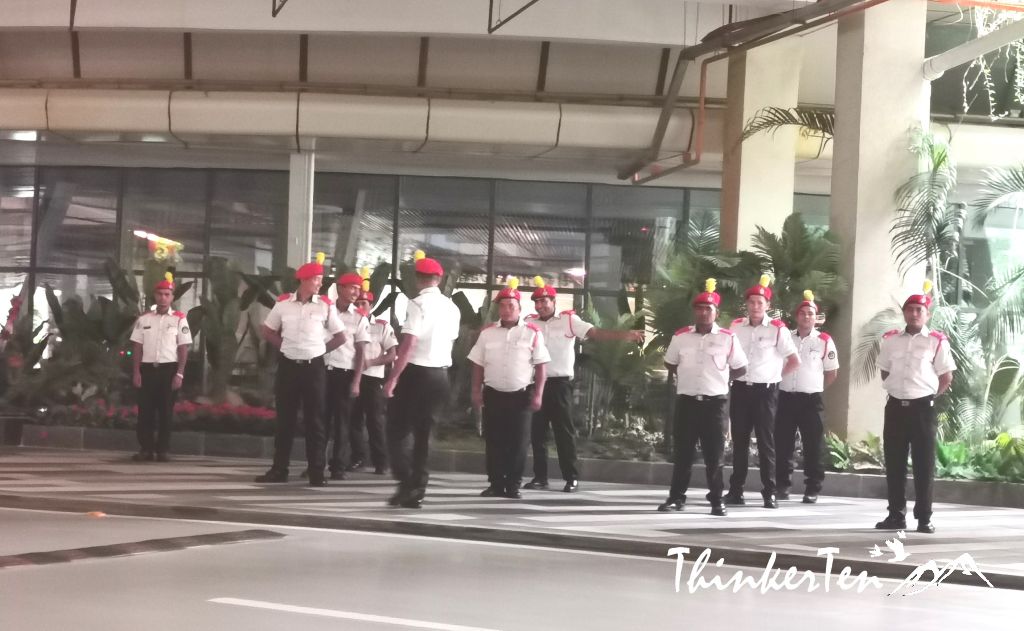 Education is one of the key factors to look at for Chinese buyers! The Shattuck-St. Mary’s Forest City International School was already established and open for enrolment. It is an American International school and I heard from a Chinese resident in Forest city, the annual fee is about RM 80,000 for pre-schooler! 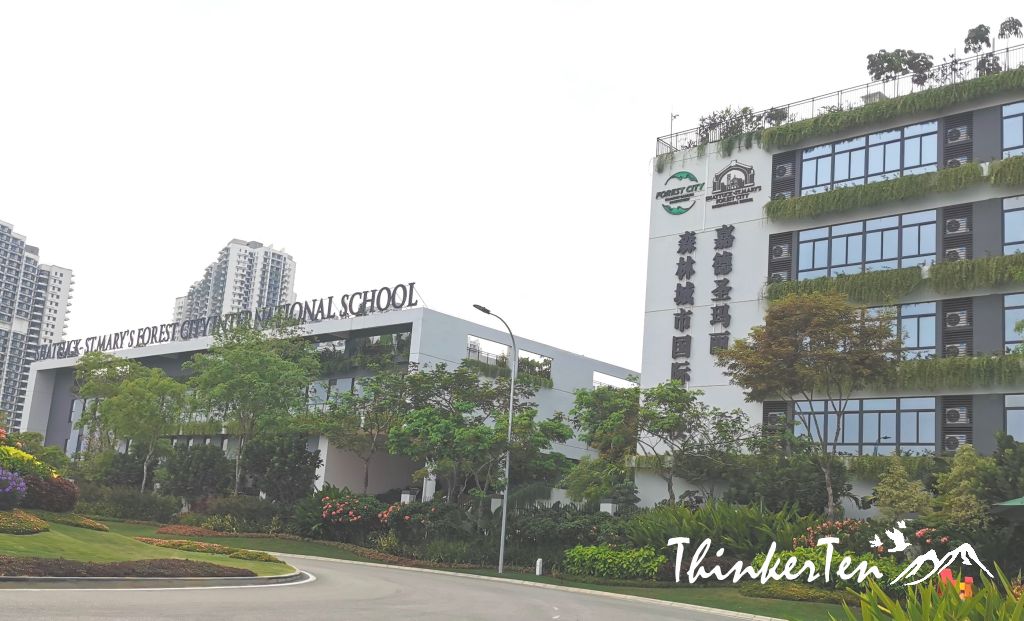 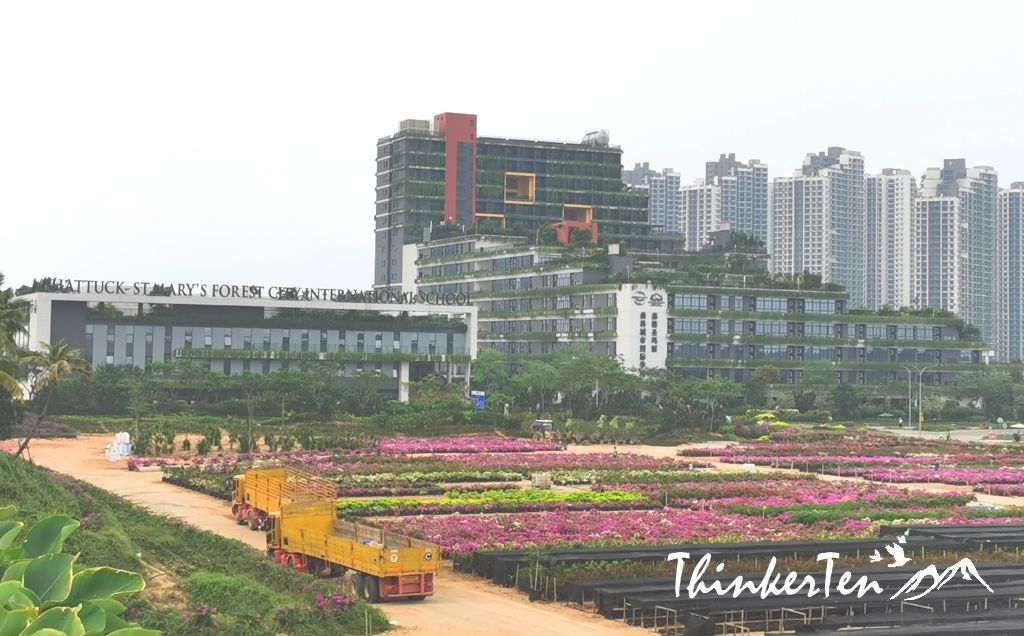 The 18 hole golf course hotel provides first-class standard, the landscape is simply breathtaking and you are able to watch it from the hotel lobby.  There is a 15 mins drive from our hotel in Phoenix Hotel to reach the Golf Hotel and you will pass by the mangrove forest. 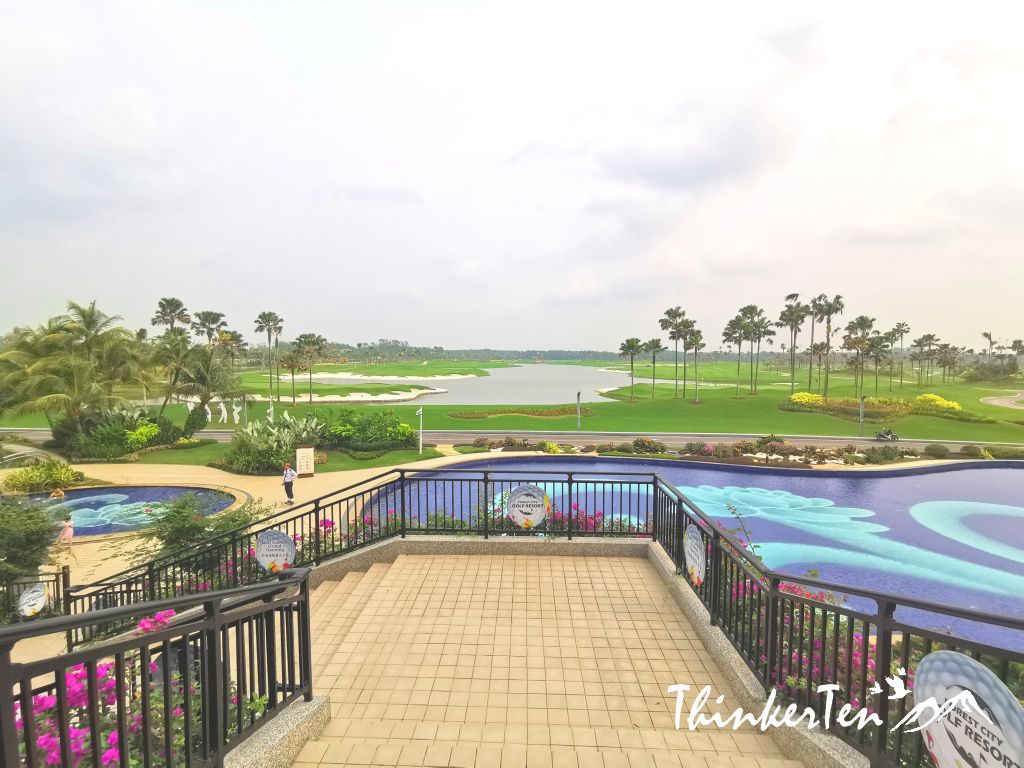 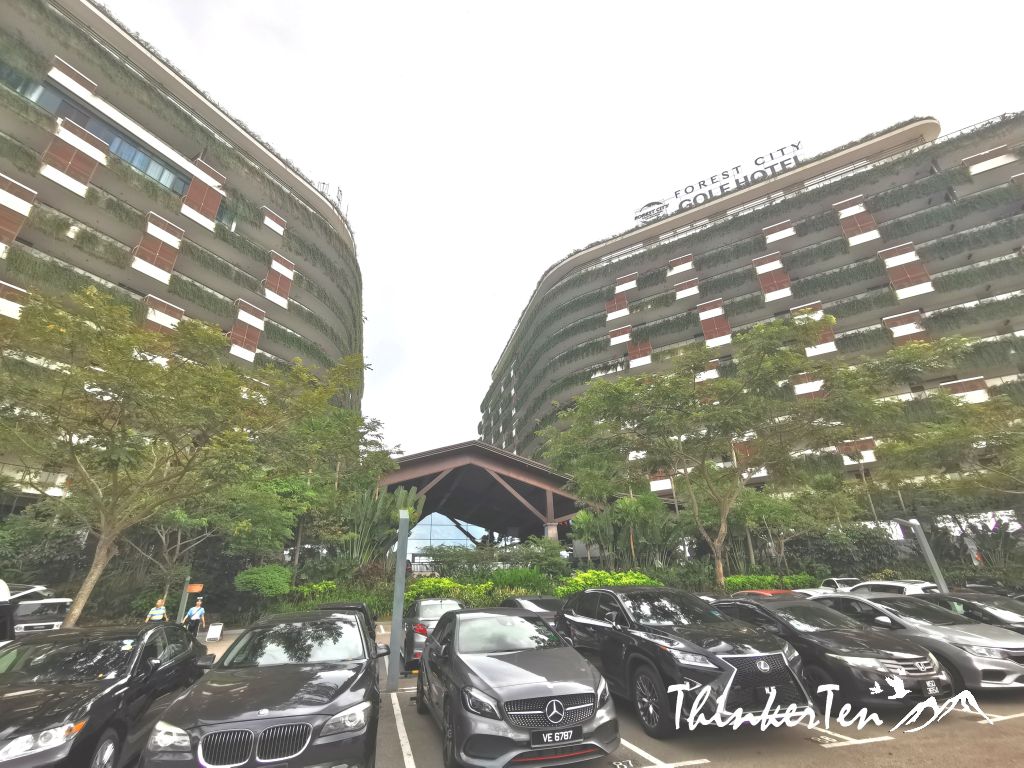 Forest City is an ‘eco-smart city of the future’, it is going to be an exciting township that supports futuristic urban lifestyle. I am sure when I pay a visit the next time, it will give me more surprises.

Oh yes, nearby there are Hello Kitty Town & Thomas Train in Puteri Harbour and themepark Legoland, in case you want more places to explore. 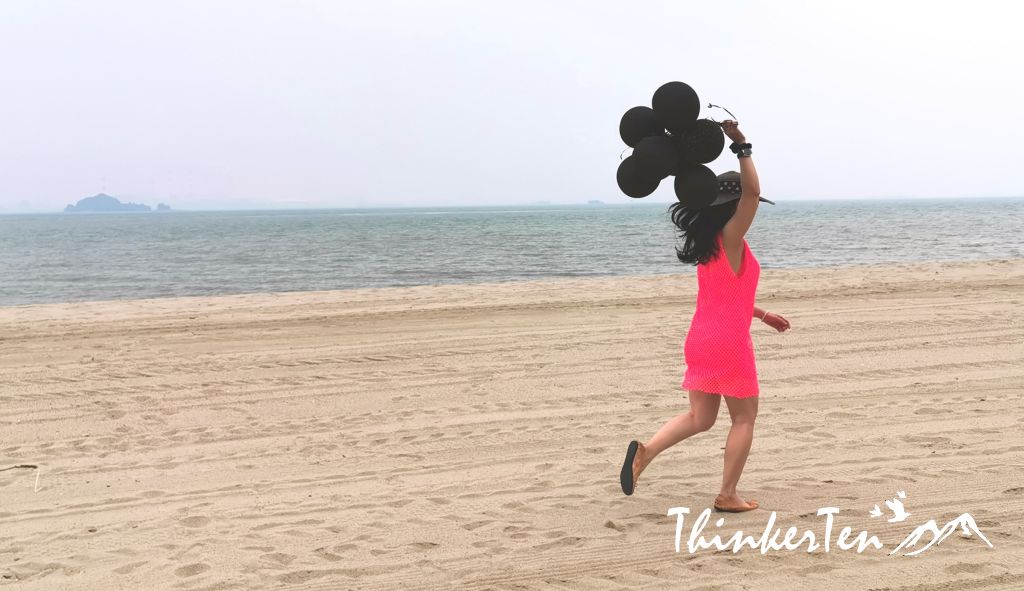 You really do visit the most beautiful places. Malaysia looks like a place we’d enjoy visiting.

I have never been there but I definitely wanted to see how beautiful this place in person, it looks relaxing and a lot of fun to be there!

I’ve never been here but I do admit this looks great! For sure adding to bucket list!

I would love for me and my husband to visit Malaysia! Your post and photos really capture the lifestyle there!

Malaysia is on top of my list for sure!!! The country is gorgeous and can’t wait to explore it.

Beautiful sights. Incredible combination of greenery and modern architecture. This place will be a very good spot for vacation.

Wow it’s seems like a popping town over there. So many sites and attractions. They really have build up in a good way. Great pictures as well!!!

Loving this new attraction in Malaysia. My brother in-law used to work there as a chef and yes you are absolutely right the people in Malaysia are diverse with other Asian residents too.

Glad to learn that your brother in law worked in Forest City before. The world has changed now and is globalized.

This looks like it was an amazing getaway to go on for a vacation. I will have to travel to Forest City soon.

Forest City makes a good getaway for Singaporean and Malaysian, a nice city and so comfortable environment.

Ooh it looks like a lush and exotic city with a very futuristic and modern vibe. I love Malaysia and maybe I’ll check it out.

You are right, the city has a futuristic vibe and theme. Everything here is well planned and the buildings are really cool too.

Haven’t been to Malaysia yet but this seems like a great place to both visit and live in.

Forest City is a great place for residents and office, it is a very well planned city. You will love it the moment you drive in.

Malaysia is an incredible country and very scenic! My niece is from there and is there right now actually. Forest City looks like a fun place to tour through.