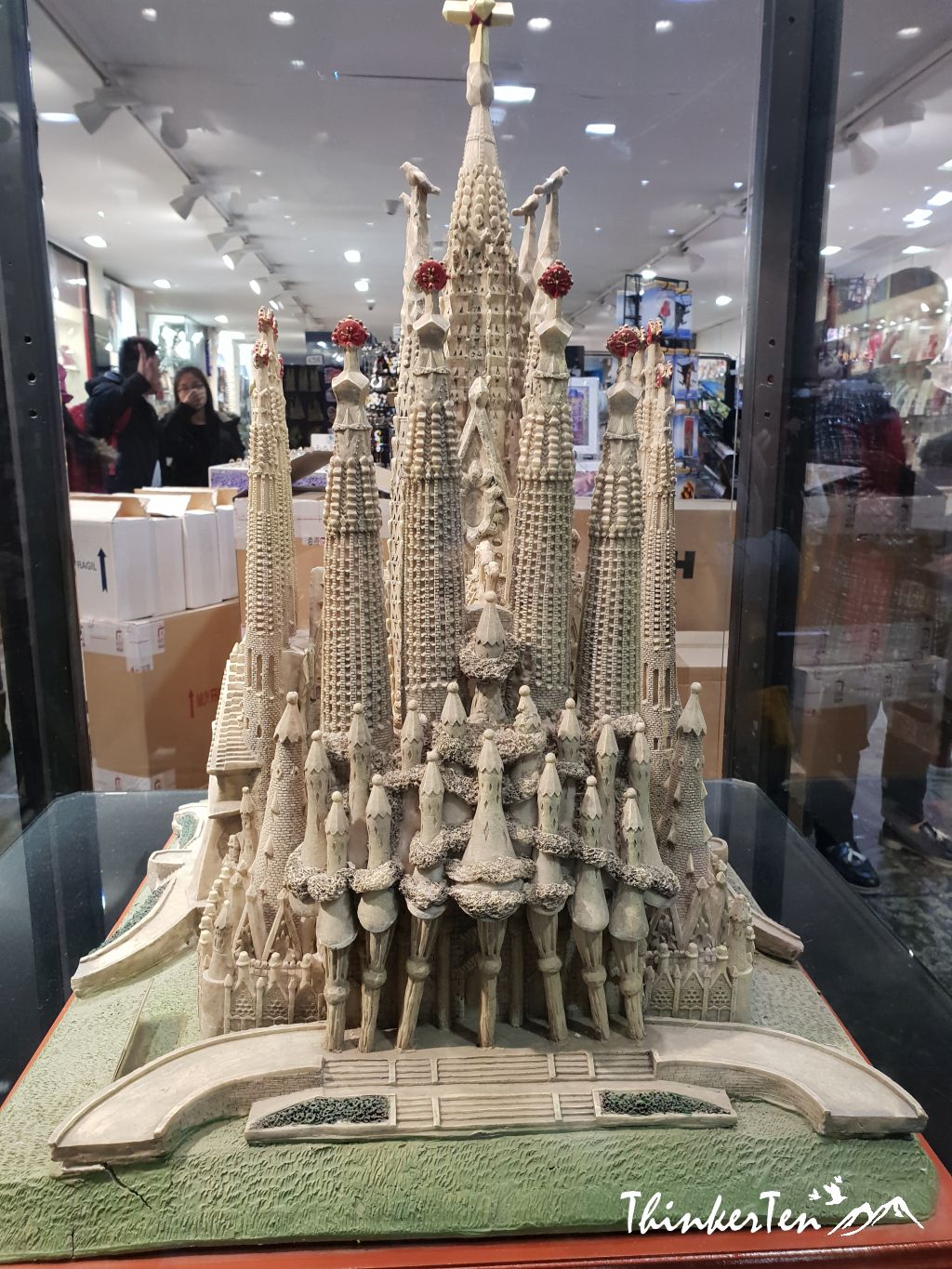 No matter what time of the year, Sagrada Familia is always crowded with visitors. There are three million visitors come visiting every year and this helps to support the construction of the magnificent building which costs 25 million euros annually. We have gotten our ticket in advance so there is no need to queue for the tickets anymore. 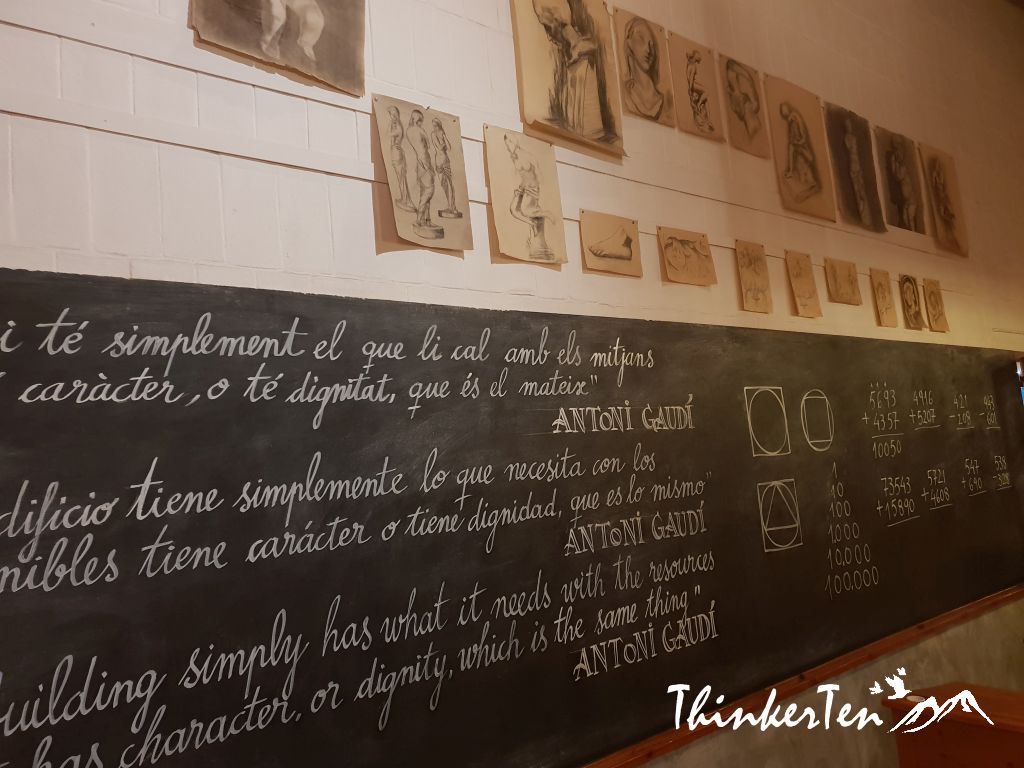 Who is Antoni Gaudi?

He the most famous architect in Spain. Born in Spain in 1852 and died in 1926.  Gaudi was hit by a running tram and died in the hospital at the age of 73.

Gaudi has never married before and has no children. I guess he too much into his work. He is also a devoted Catholic who attending Mass and praying every day. Because he was so busy with his work and project, he did not pay much attention to his appearance and wore shabby clothing and didn’t even bother to shave his beard. When the tram accident happened, people thought it was just another drunk beggar being hit.  No one bothers to go help him. (Life for a beggar is cheap, that is sad!) If he was sent to the hospital immediately after the tram accident, he could have been survived and lived longer.

Estimated to be completed in 2026

There are in total 18 towers when Sagrada Familia is estimated to be completed in 2026. It took over a century to build this masterpiece since 1882 when the project began.  You will see cranes are still working at the top of the spires.  The top of the spires are very tall and the highest point is as tall as Montjuic Hill. 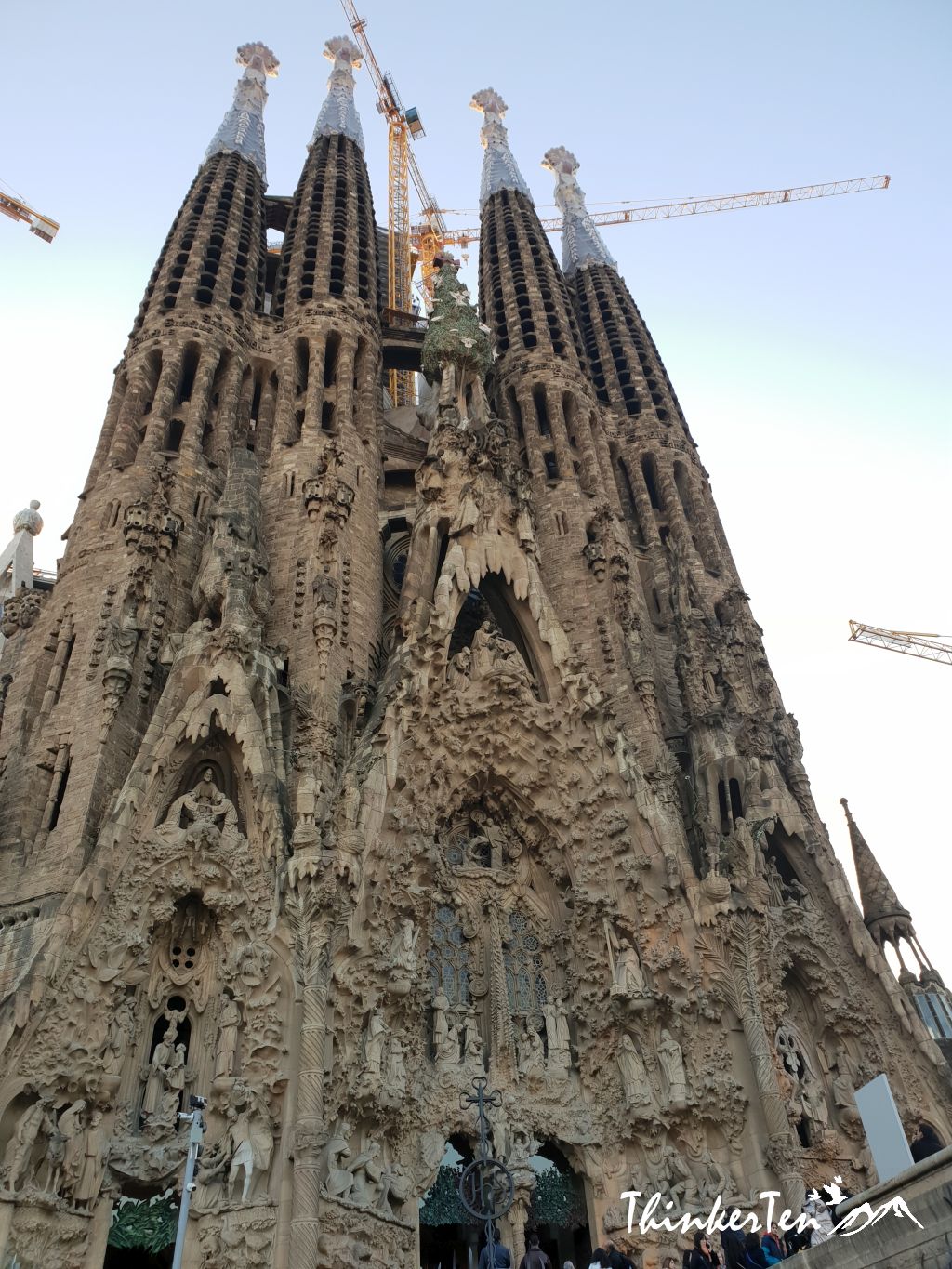 How long do you need?

You need about one to two hours to visit and if you like, you can go up to the Gaudi towers on the top and look at the view. Taking a guided tour is so important as it helps you to understand the intricate details of the church. 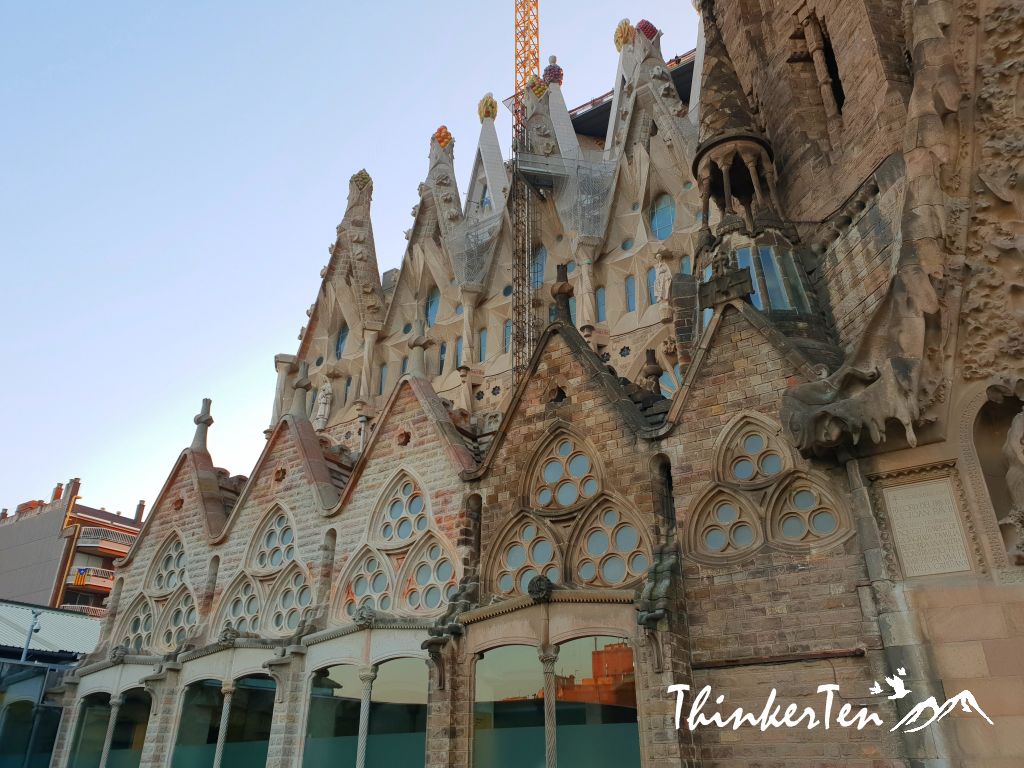 There are three facades at Sagrada Familia which look quite different and has its own characteristic. View from the Nativity facade is as below. If you pay attention to the details of these sculptures, you will notice birth and happy vibes.  Visitors usually enter from the nativity facade. 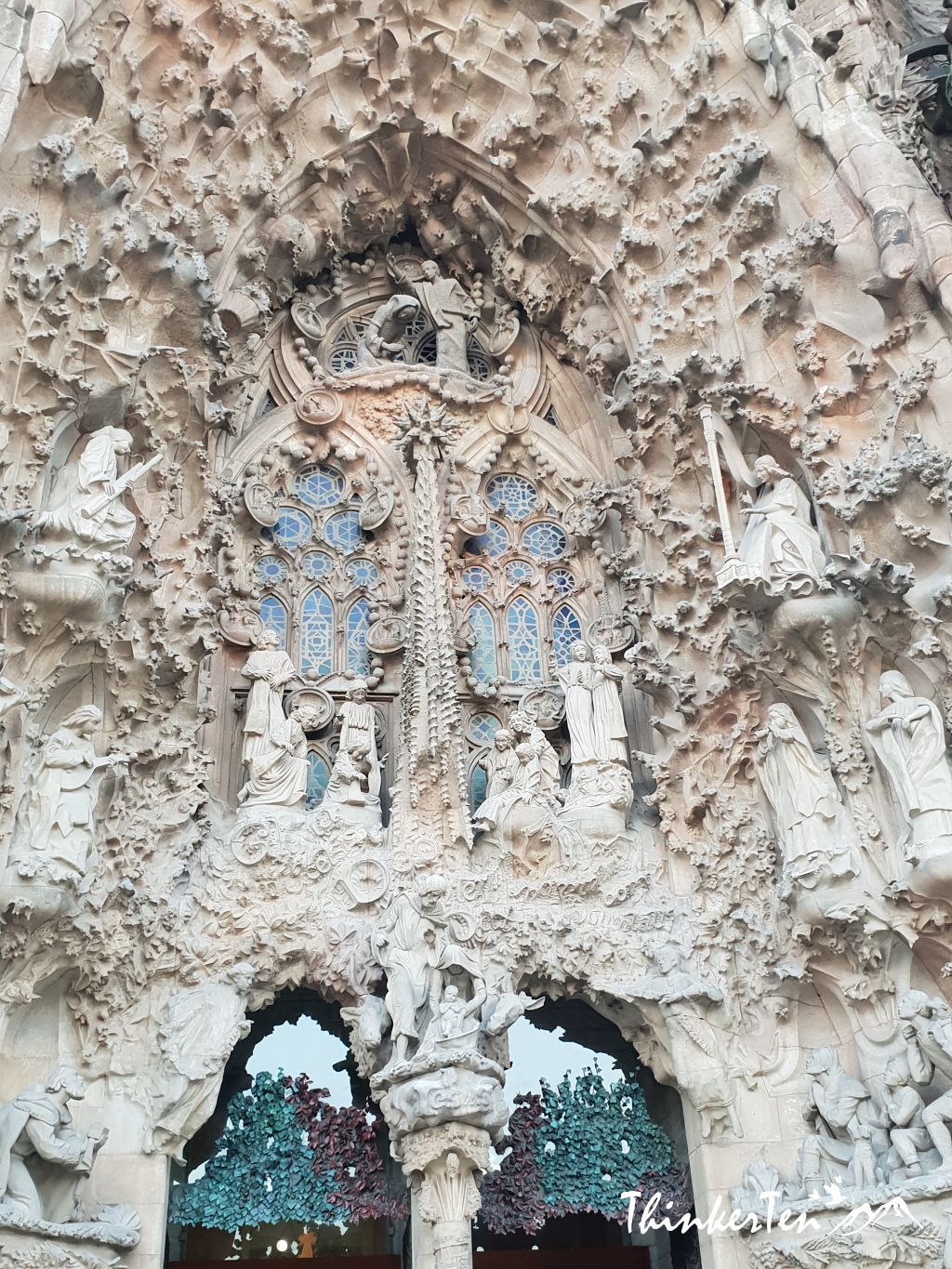 Sculpture of Birth of Jesus

The sculpture of the birth of Jesus was shown in the nativity facade. 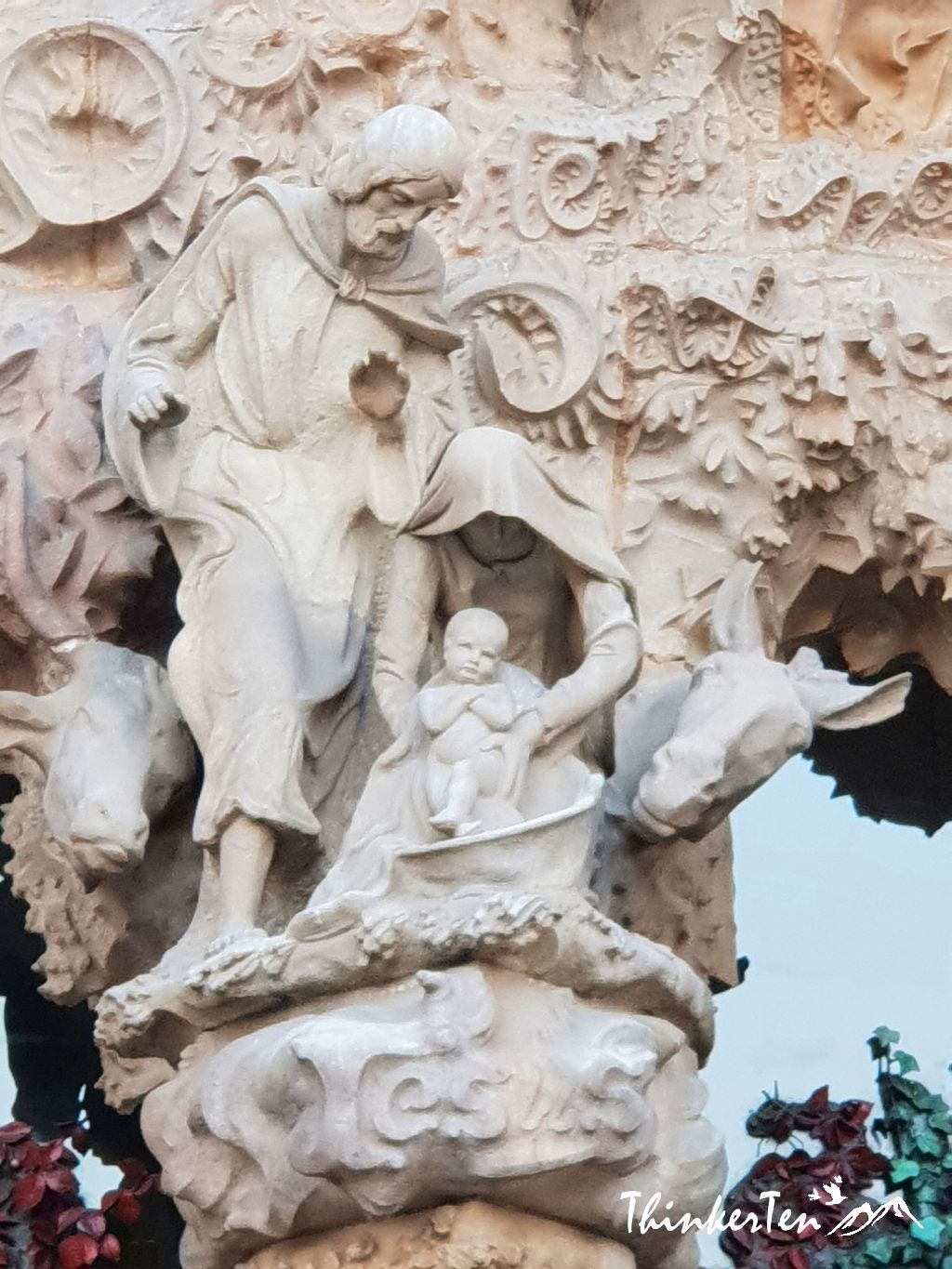 Gaudi loves nature and you will realize there are a lot of “nature” elements incorporated in this project. Beatles and bugs are also seen in the doors and they look super real. 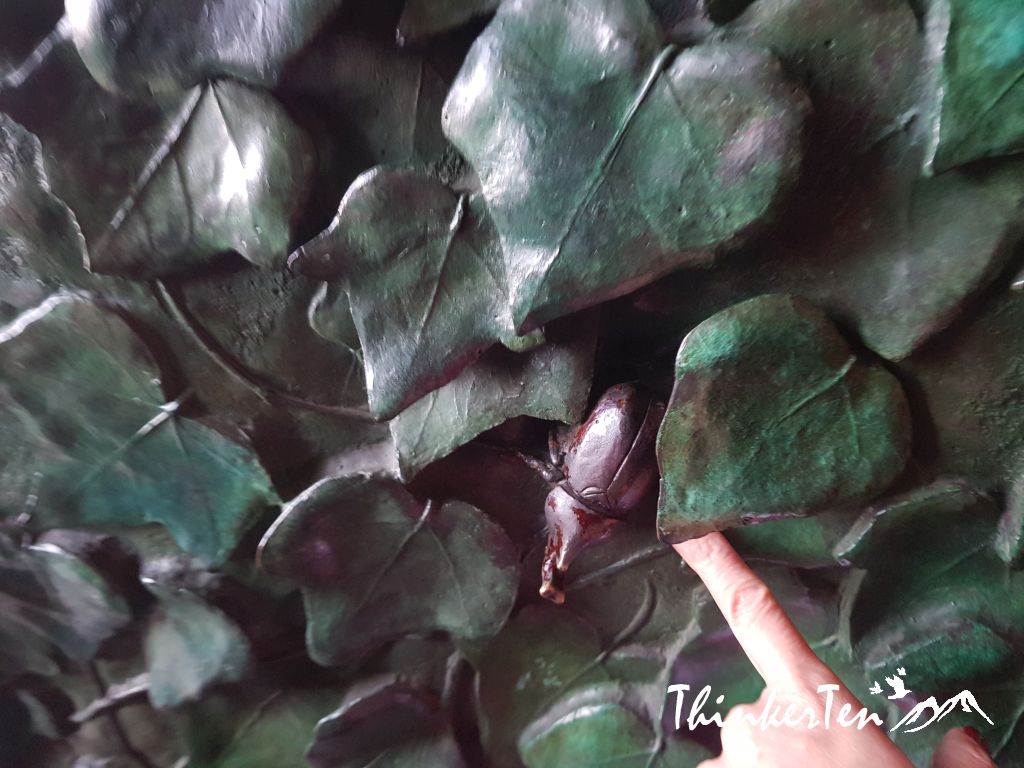 Interior of the Church

The outside looks spectacular but inside is even more jaw-dropping! I have been to so many churches around the world and I can say that Sagrada Familia is the most value for money one. You have to get the ticket to see the interior!

Many tall poles in unique shapes and they represent the trees, as mentioned, Gaudi loves nature and he intends to make the church like a forest theme.  If you look up the poles, you will notice there are branches out at the top. 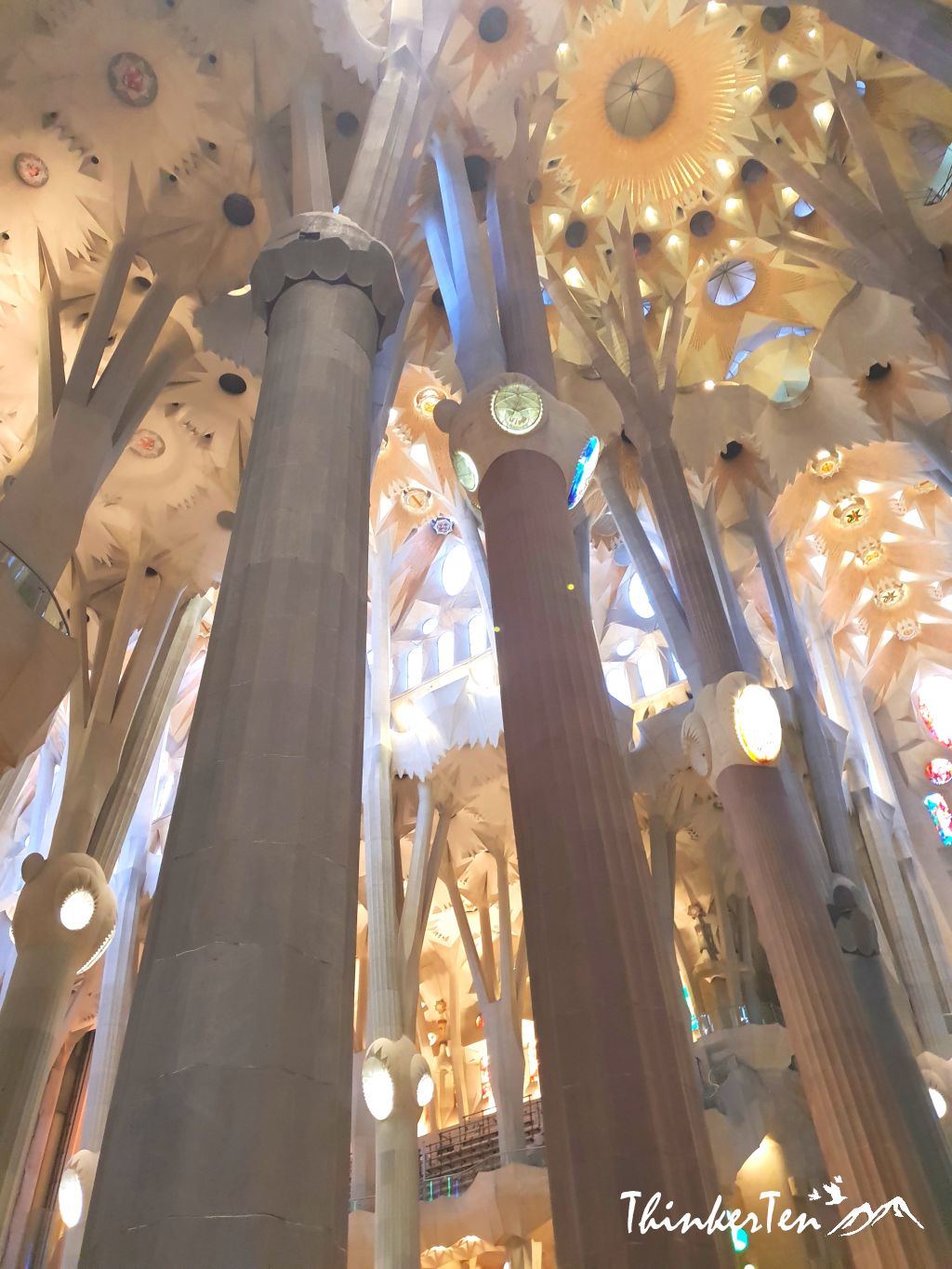 One of the signatures of Gaudi’s work is colors and lighting. The blue and red stained glass in the church drew my attention and they look best when sunlight seeps through them. 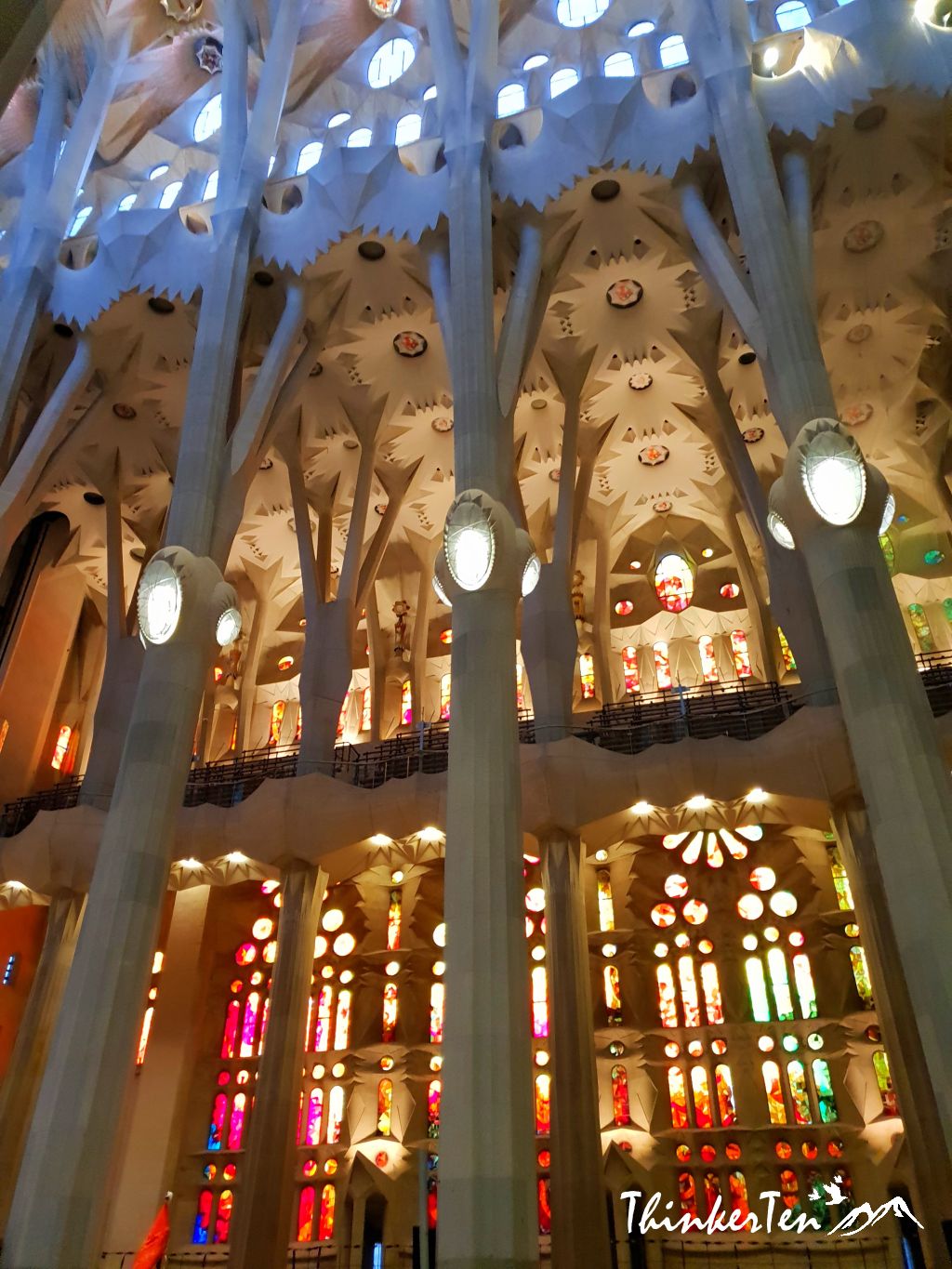 The Passion facade is simple and looks complete opposite from the Nativity facade. It represents sorrow and sad and to be frank, quite scary when you look at these sculptures. 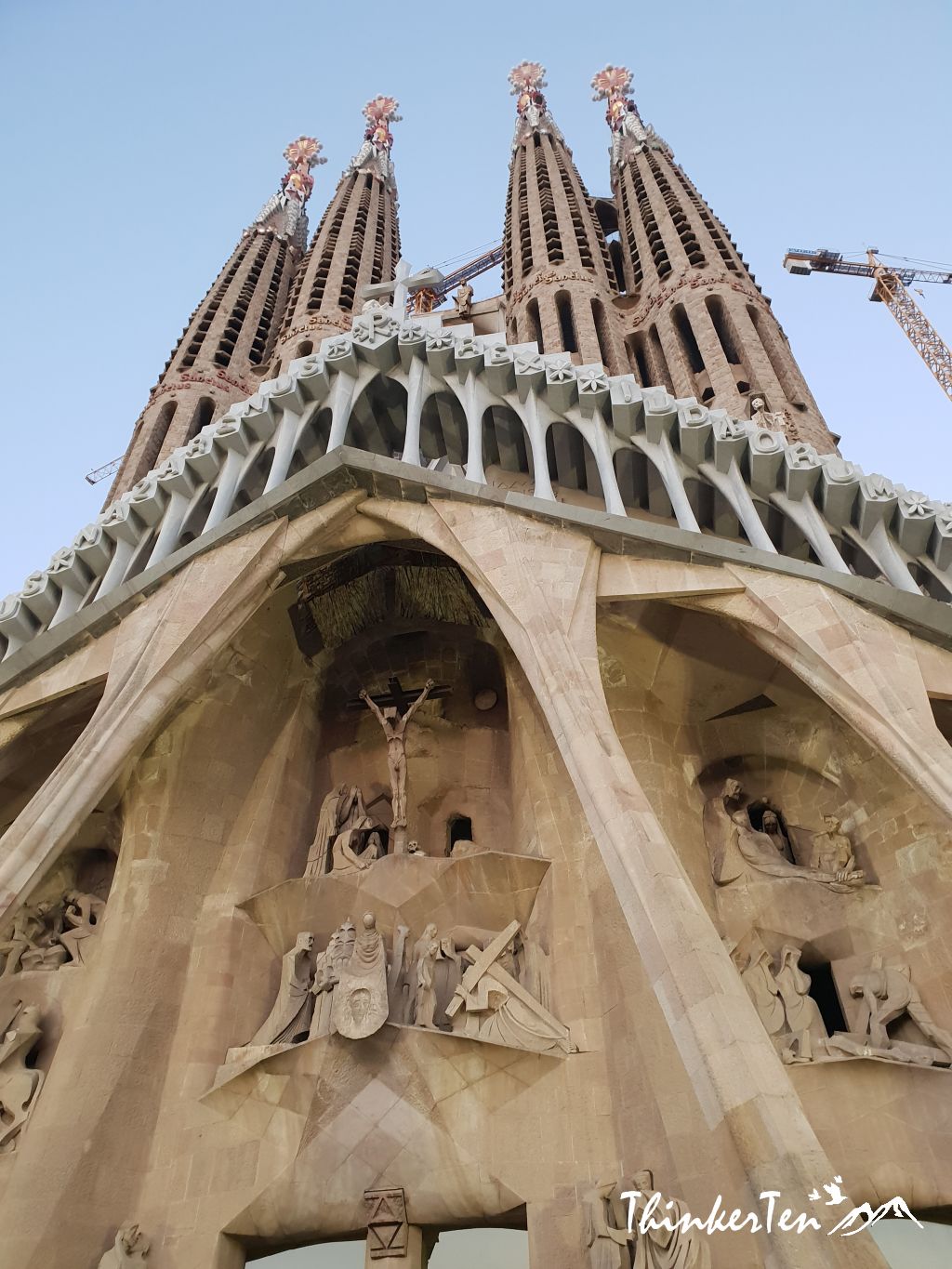 Old and sad faces are shown in these sculptures and all have the square face. 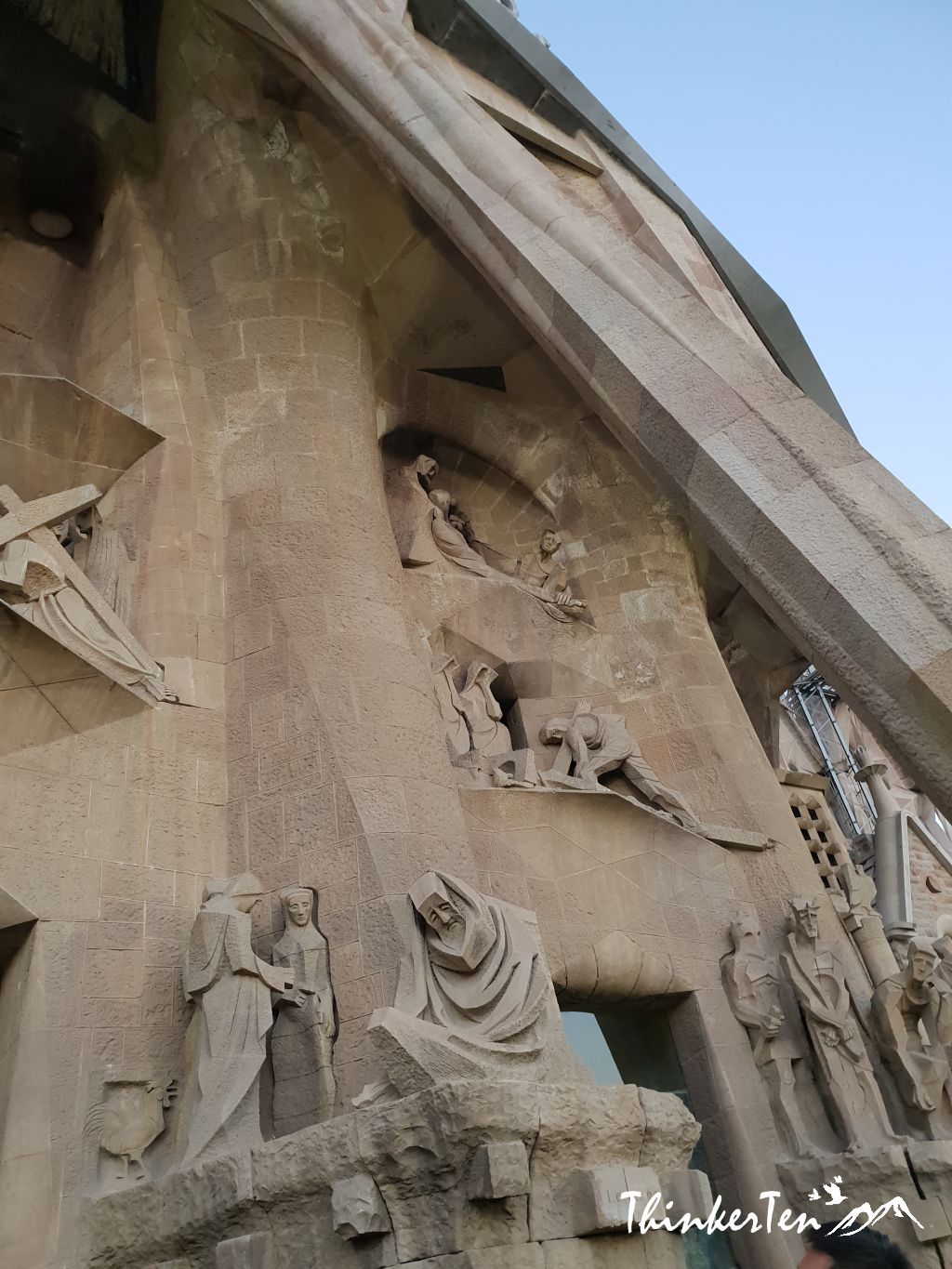 Magic Square on the Passion facade

There is a square with a series of numbers on a square grid, just like “sudoku”. You can try adding up any row, column or diagonal line and it always adds up to the same number -33.  I have tried and confirmed it is always 33. 🙂  It was the age of Jesus when he died. 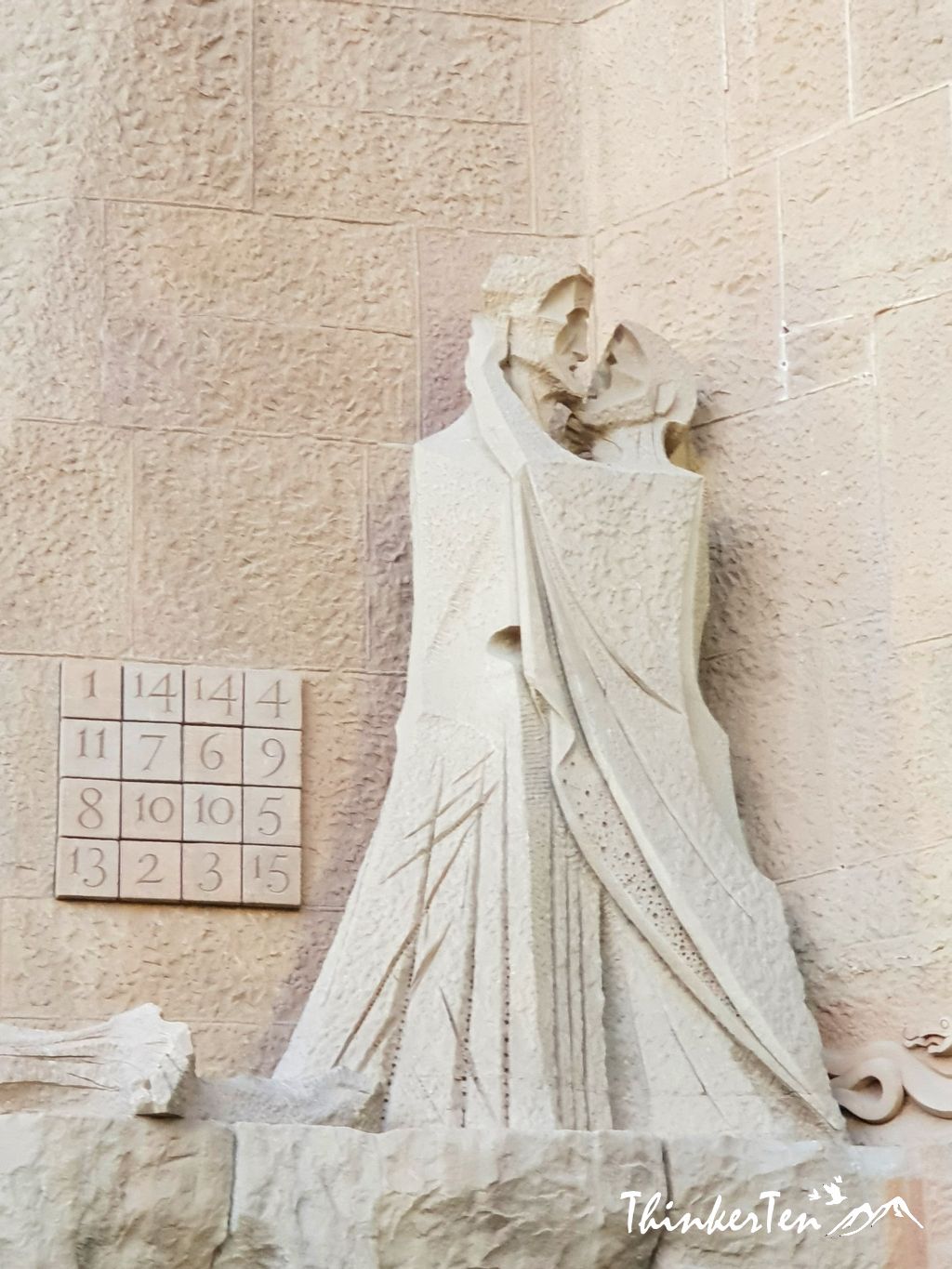 At the exist there are these beautiful bronze doors that have special messages captured. It shows the day Jesus passed away. 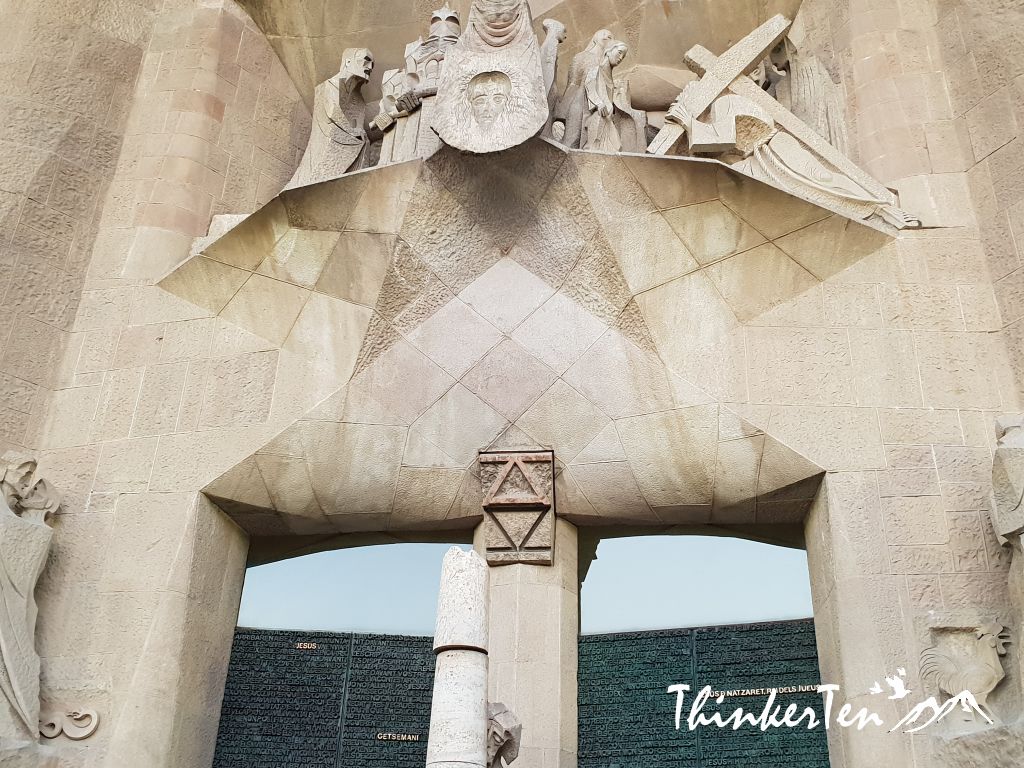 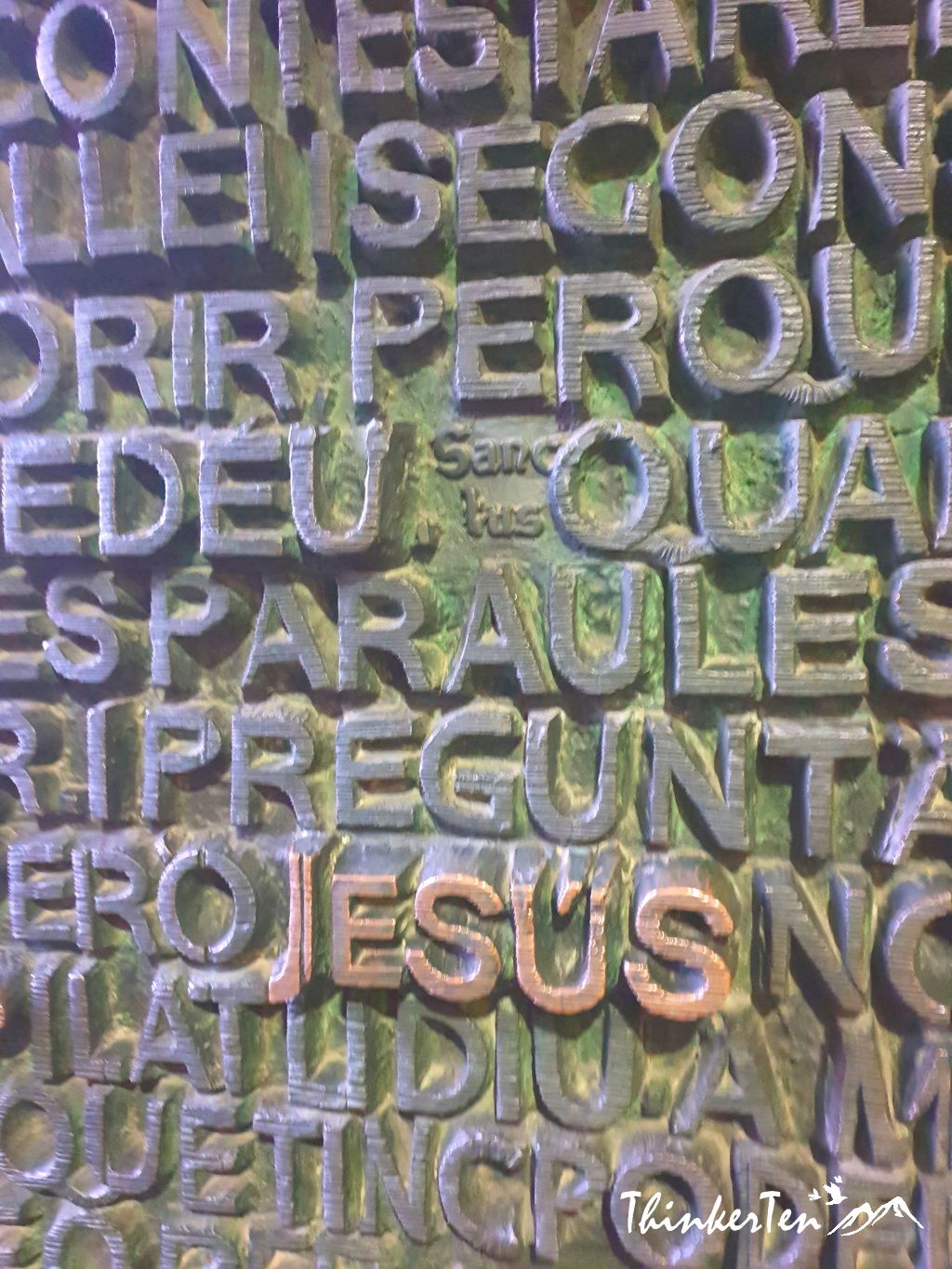 Gaudi is a thoughtful guy, he built a school on the site called the Sagrada Familia School. It was built for the children whose father work here as the construction workers. There is a small museum next to the Sagrada Familia and there are pictures showing the old school.

Sagrada Familia is truly an amazing monument, a UNESCO World Heritage site and your Barcelona trip is not completed without paying a visit here. I highly recommend anyone to buy the ticket to get in to check out the interior of this Basilica. Trust me, it gives you a good shock and not the usual cathedral or basilica that you have seen so far. 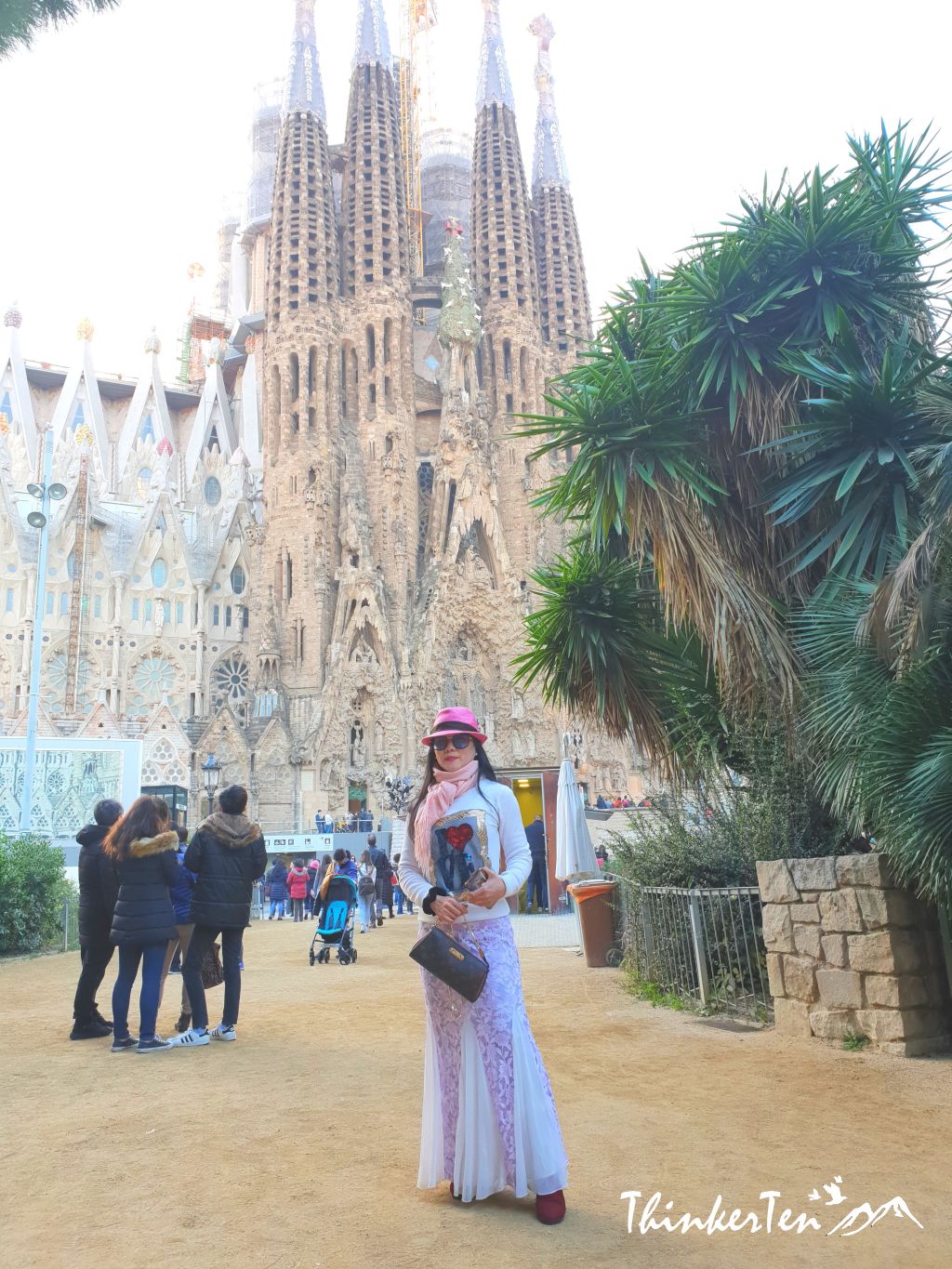 Oh my goodness. This is so intrecate and beautiful. The work that has gone into the building is amazing.

I visited many times Barcelona but I never visited the church inside. Now I know that I need to visit this place next time 😉

Wow! How lucky you are to have visited this wonderful and stunning church in person, it has always been my dream to go there

Wow this church looks amazing. I hope to one day visit this place as well 🙂

Spain is on my top 5 list to visit. My cousin invited me last month to go and I didn’t take up on her opportunity!

Oh my god! This Church is so spectacular! It’s really like a House of God. The interior is so amazing! The statue in the wall of the building is so historical!

That is definitely a beautiful church. I love the architecture of it.

wow I would love to visit one day! I love the colors inside

So much history and beauty in one spot! I love the close up shots where you can see all the details.

Wow the structural design is amazing, can definitely see why the project will take such a long time to complete.
XO, MJ
https://www.lush-fab-glam.com

I’ve never been to Barcelona before. What a beautiful church. I would love to see it one day.

It’s one of those “so ugly it’s beautiful” type of buildings. So much character with every detail. Thanks for sharing!

Wow that is a beautiful piece of architecture. I love seeing the different buildings around the world and how beautiful they are. This is definitely one of them.