I have been to Shanghai twice and this time lived near Cheng Huang Miao because I wanted to explore more on the food and shopping. Not visiting Yuyuan Garden as I visited 2 years ago.

Shanghai is a mix of traditions and modernity, you get to see both in this city. In the old town of Cheng Huang Miao, you will see the mix of ancient and new buildings such as skyscraper and futuristic towers blend well and makes a good contrast.  Can you spot the “Thermo Flask” Tower, also known as the Shanghai Tower in the below picture? The Thermo flask-shaped tower is also the highest building in Shanghai and the whole of China, 632 m and 128 floors.

Let’s find out things to do and to know before you visit Cheng Huang Miao Old town. It contains 15 things including landmarks, shopping items, and other special tips.

It is interesting to find a Mosque before visiting Cheng Huang Miao Shanghai. You may want to pay a visit to the peaceful mosque which is located very near to where we stayed at the Renaissance Hotel. The facade of the mosque is simple but beautiful as it has a traditional Qing Dynasty style. 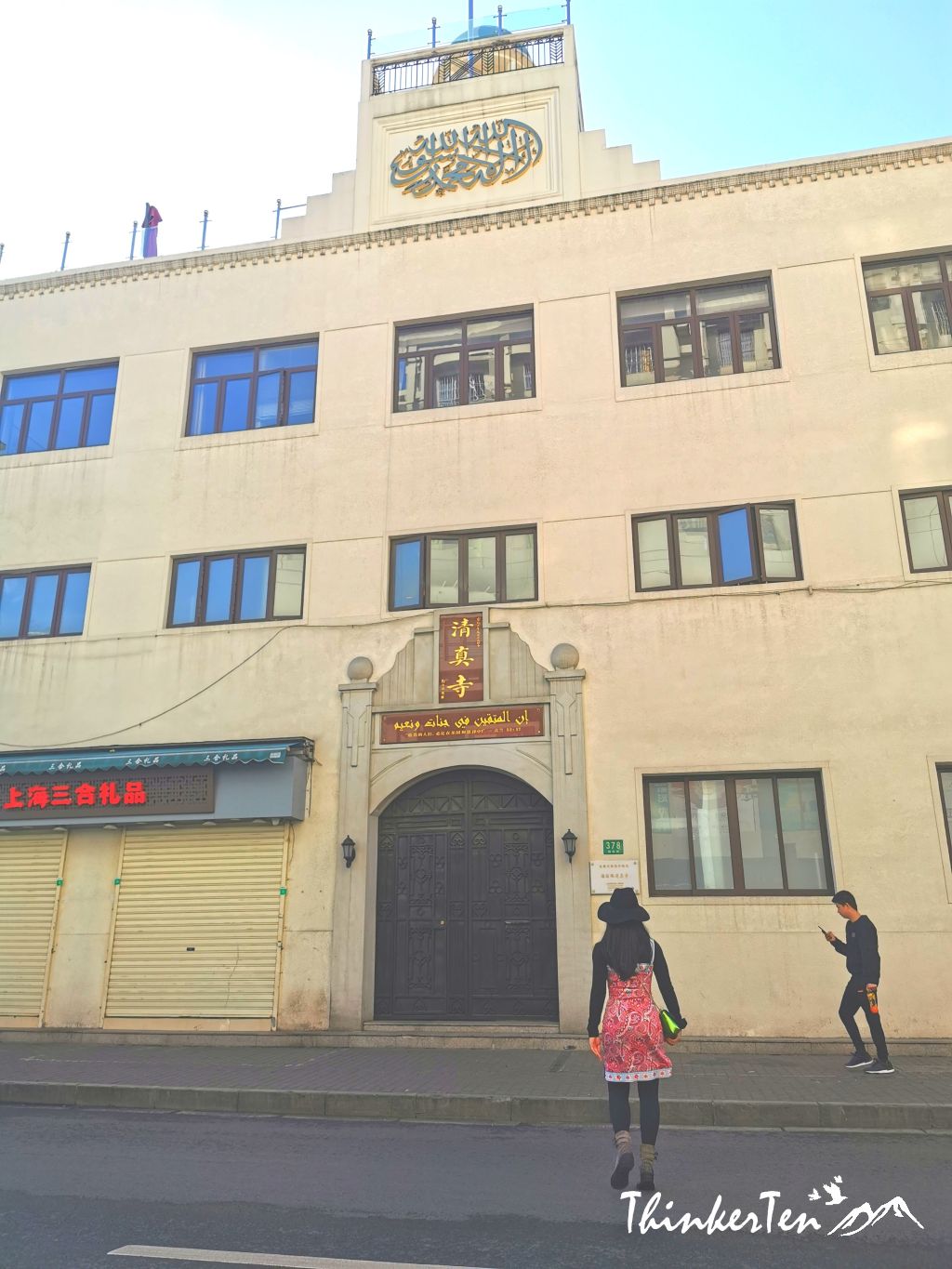 Shanghai snow cream can be seen almost everywhere and tourists love to bring back for souvenirs. It is a cosmetic product and bestselling items here with cute oldies packaging. Women in Shanghai have been using this product for ages and it is one of the authentic and oldest products created by two beautiful Shanghai sisters which became famous for years.

The restaurant of Shanghai Lao Fan Dian is always packed with tourists due to the good location as it is so near to Yu Garden. Things can be a little pricey but the restaurant certainly makes a great backdrop for photo opportunities. 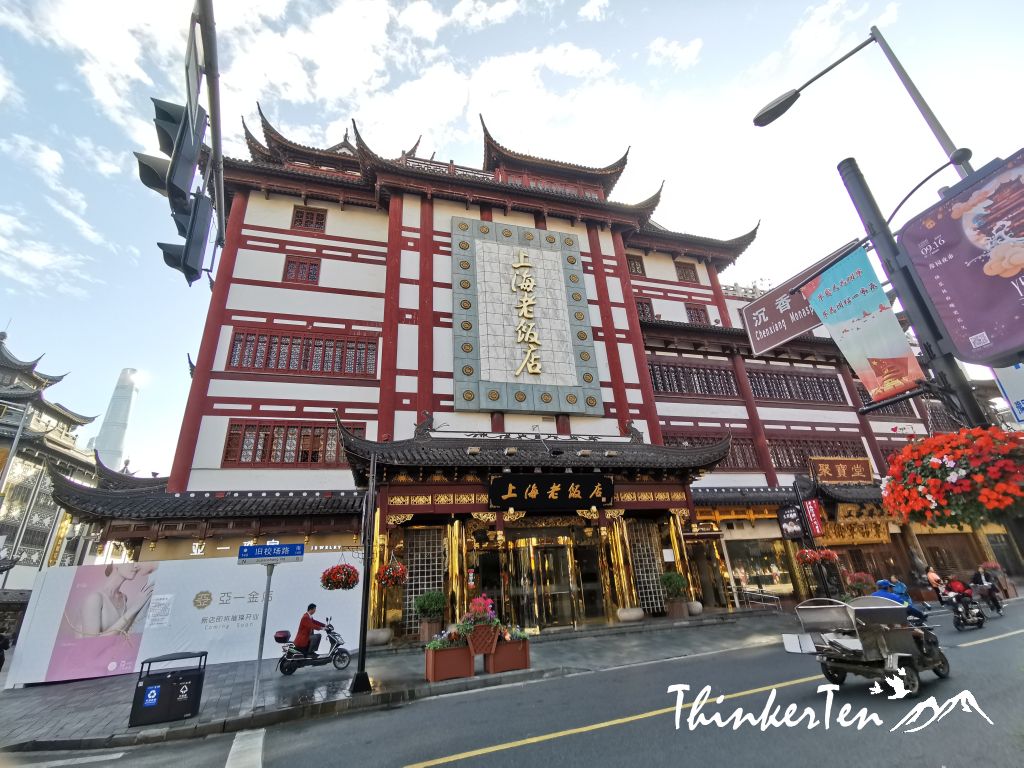 This is just right outside Yu Garden and you find so many traditional Chinese buildings that are used as commercial stores to sell local products, snacks, silver jewelry, souvenirs, and antiques.  You do find cheap souvenirs here too. 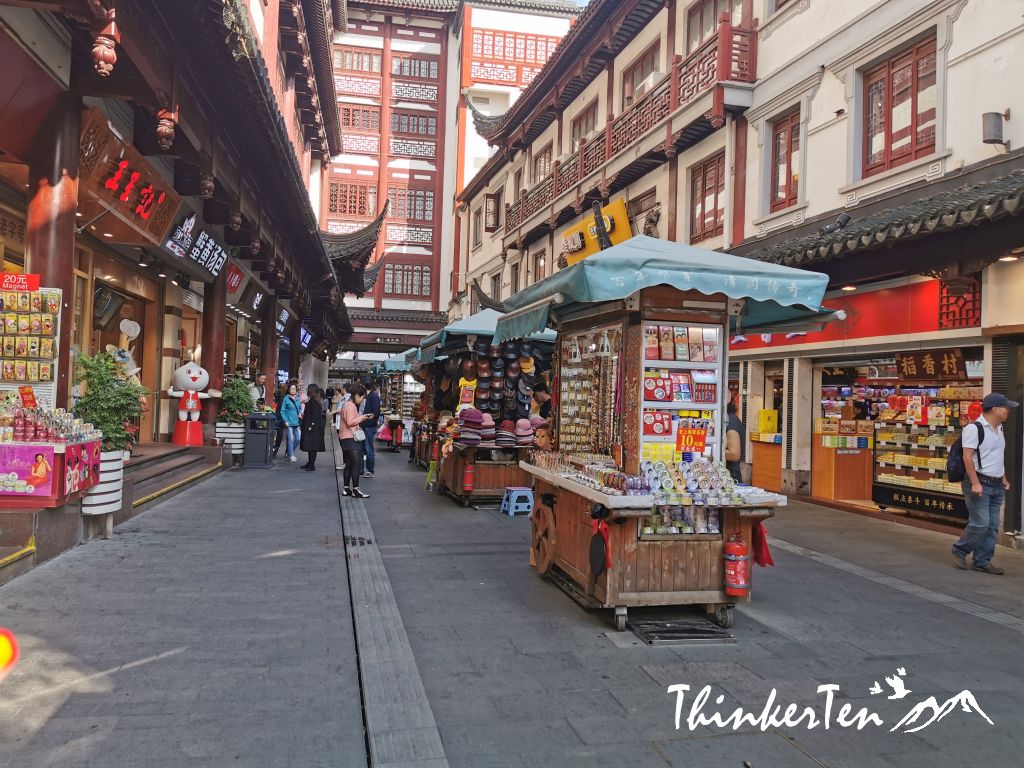 These are cute little “hanfu” for kids but they also have adults. Hanfu also is known as traditional Chinese clothing and it is so popular in China now. The traditional clothing of Hanfu has become an emerging trend entering mainstream fashion and chased by an increasing number of young Chinese. I do spot so many young people wearing hanfu on the street and it is quite a beautiful scene. 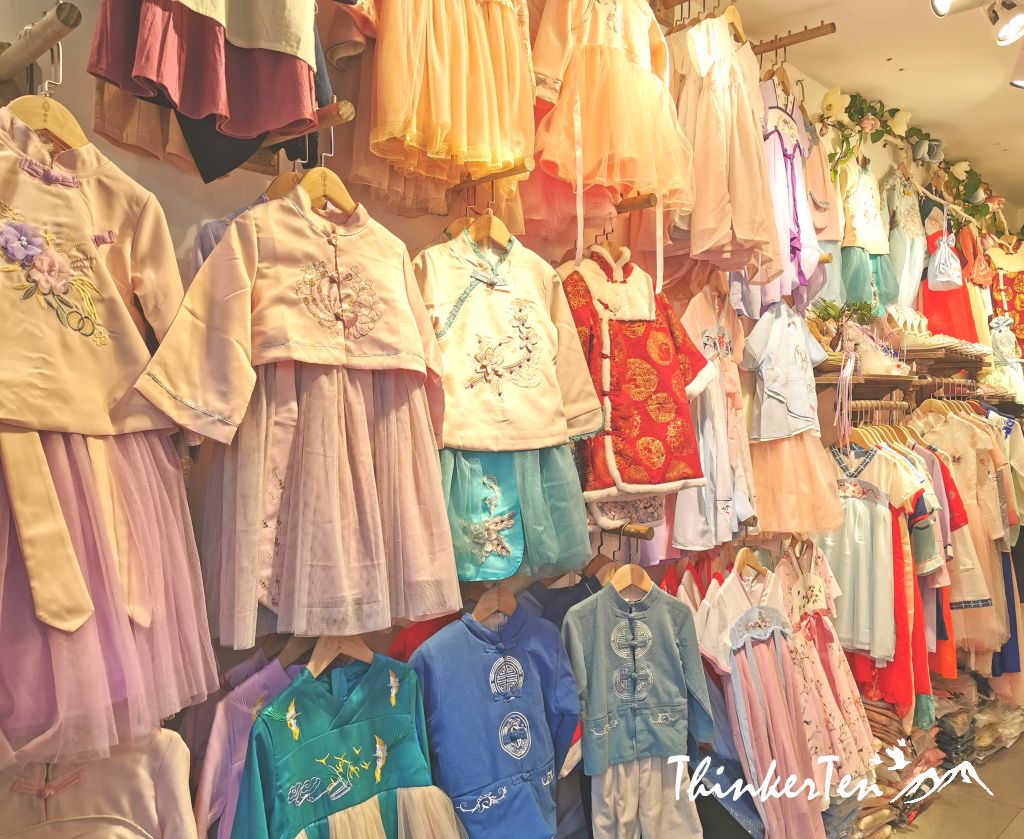 Fans are to keep one cool and umbrellas to prevent one from getting wet. In Chinese, the words for fan and umbrella are similar pronunciation. These two items go well with “hanfu” the Chinese clothing. 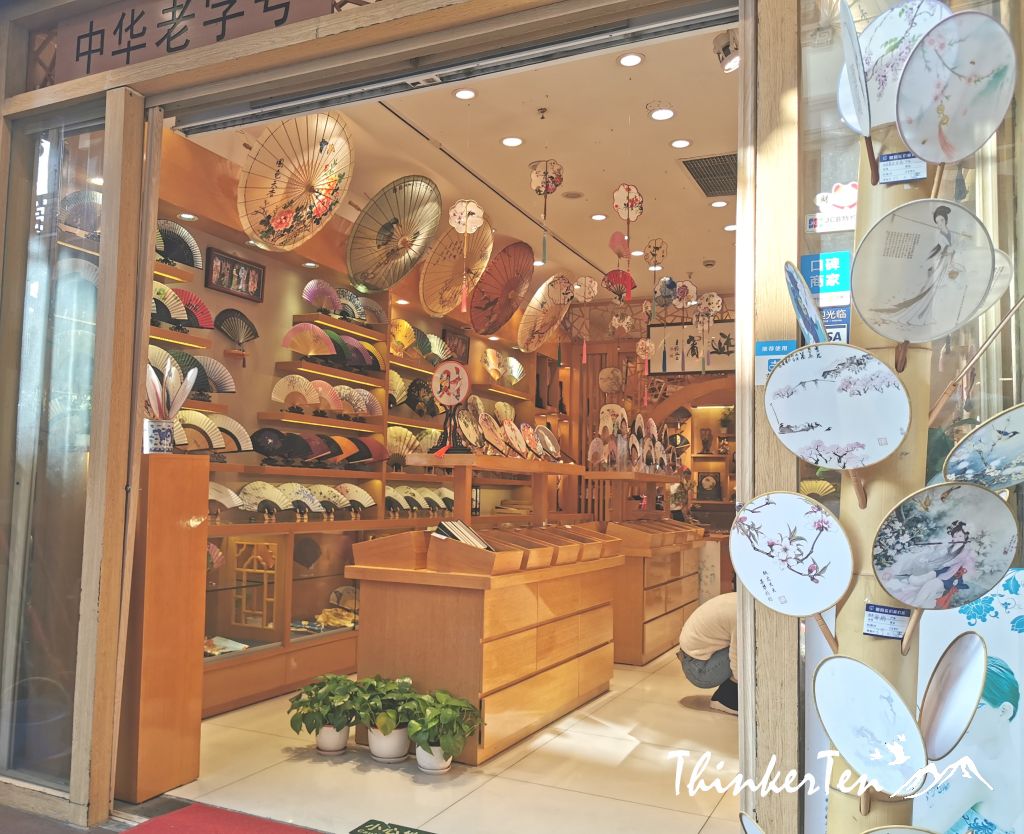 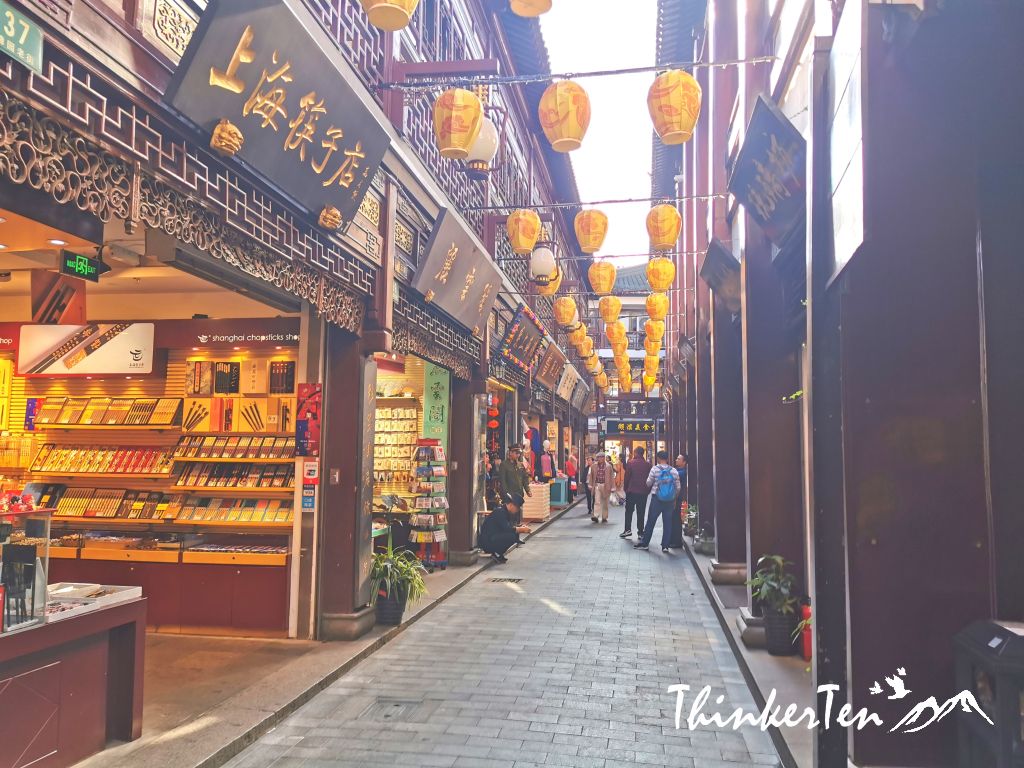 You will find Chairman Mao’s picture features on the cigarette lighter. The image is in Mao’s iconic suit which I find so communist imagery. 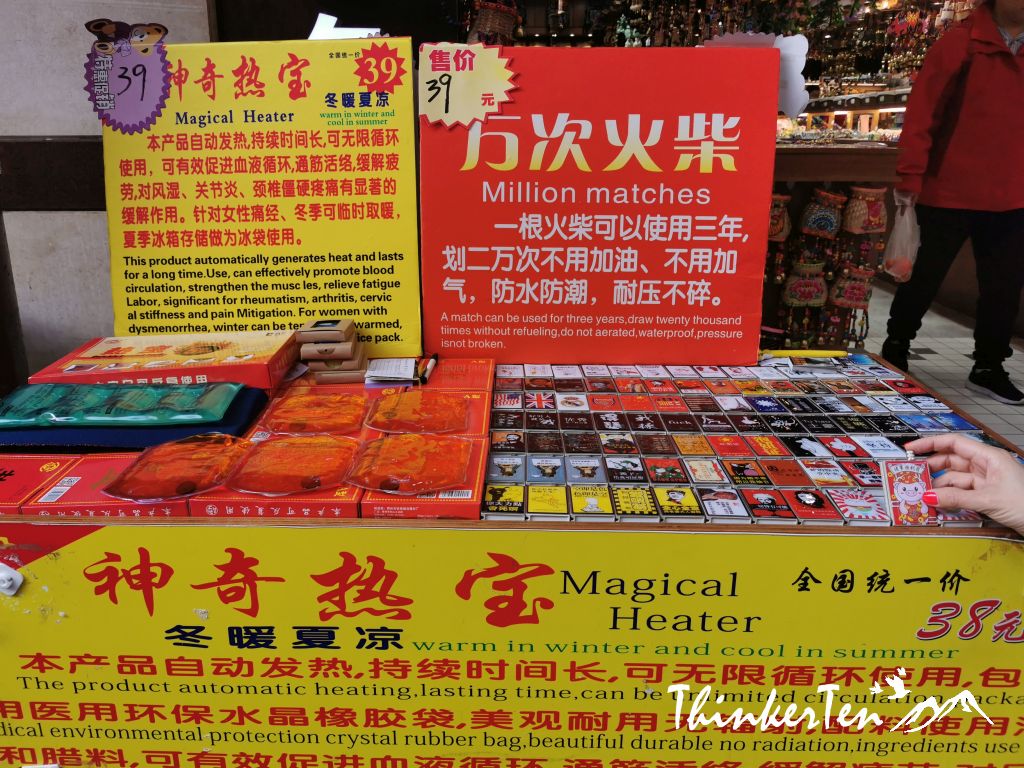 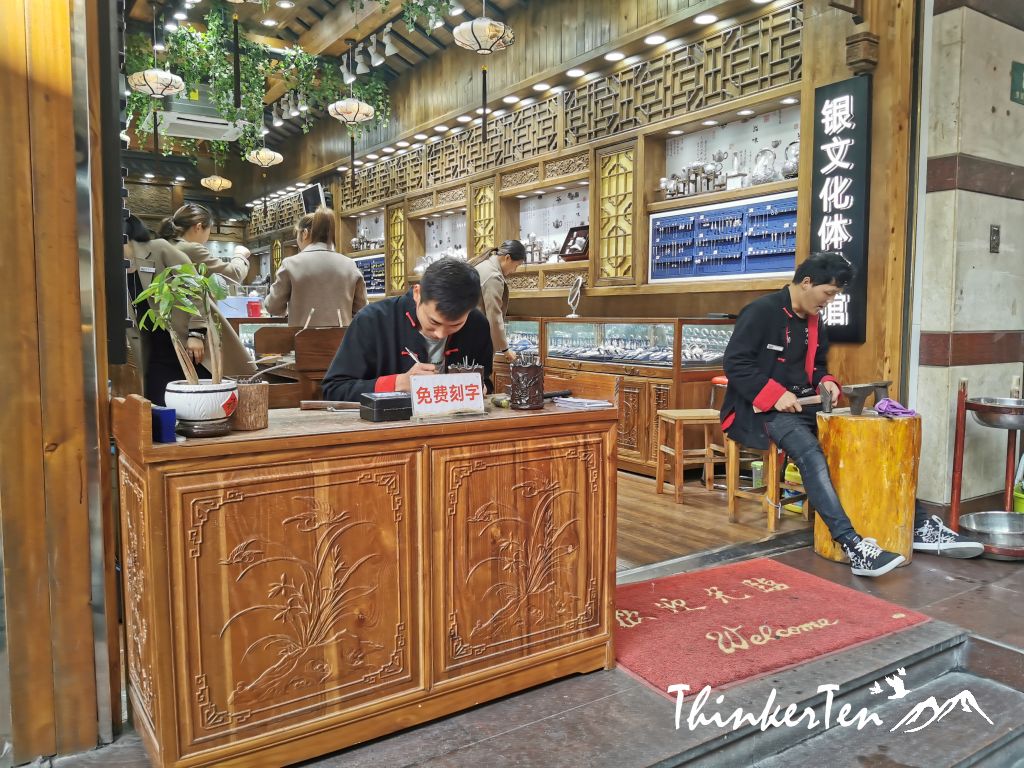 This old photo studio has all the props to make you step back in time.  First, you need to go upstairs to get change to the old clothing such as qipao – the traditional Chinese dress for ladies and then come down to shoot a picture with the rickshaw and the rickshaw man. 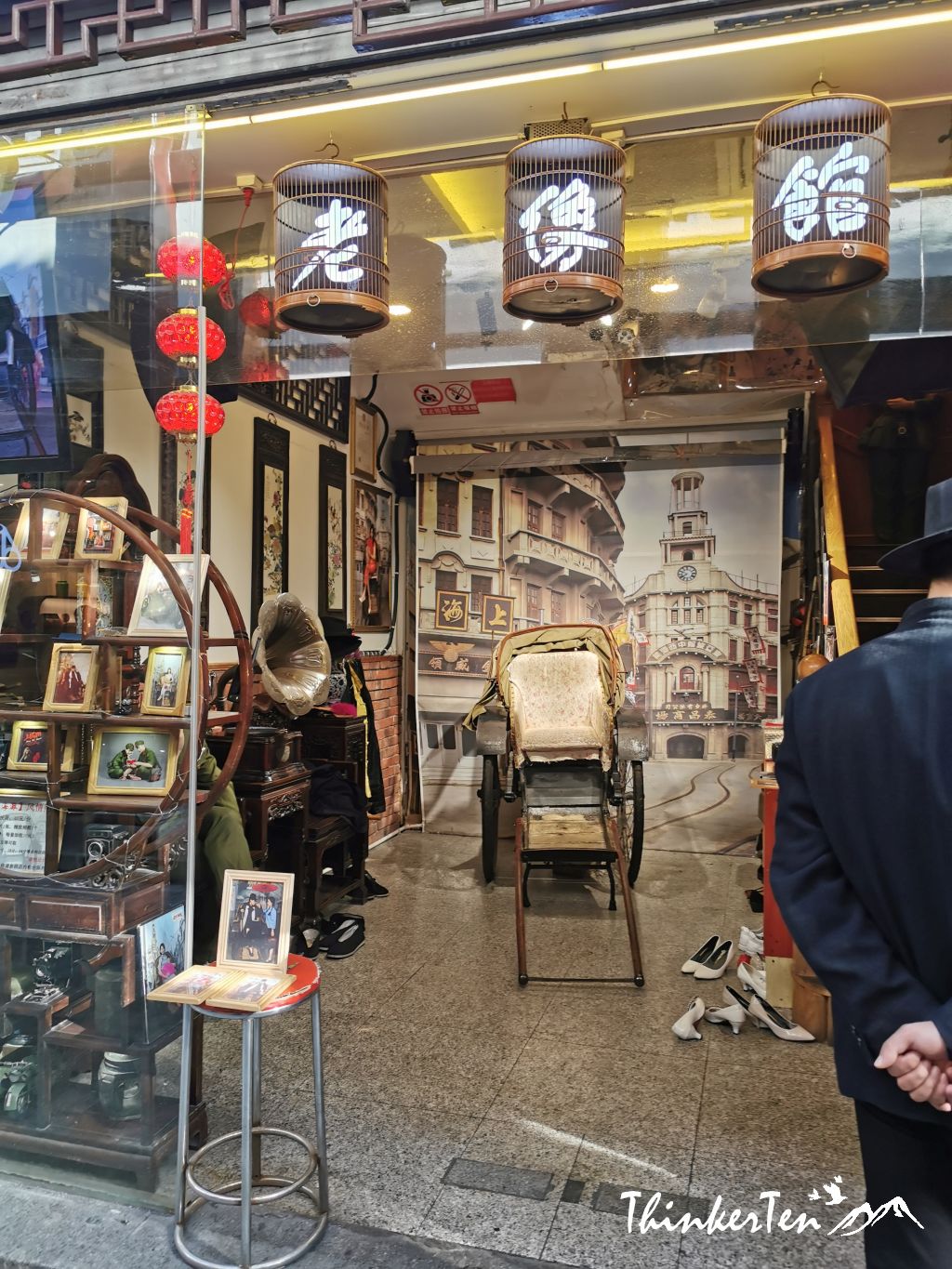 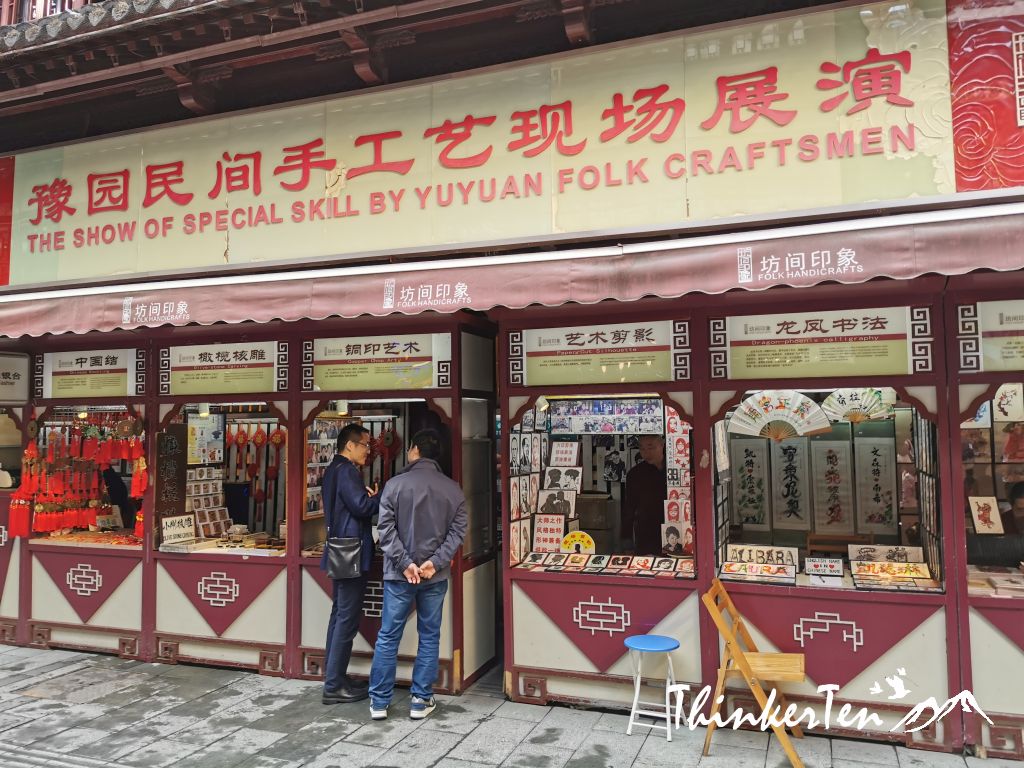 The craftsman can perform in front of you and made a picture of you by using a pair of scissors. 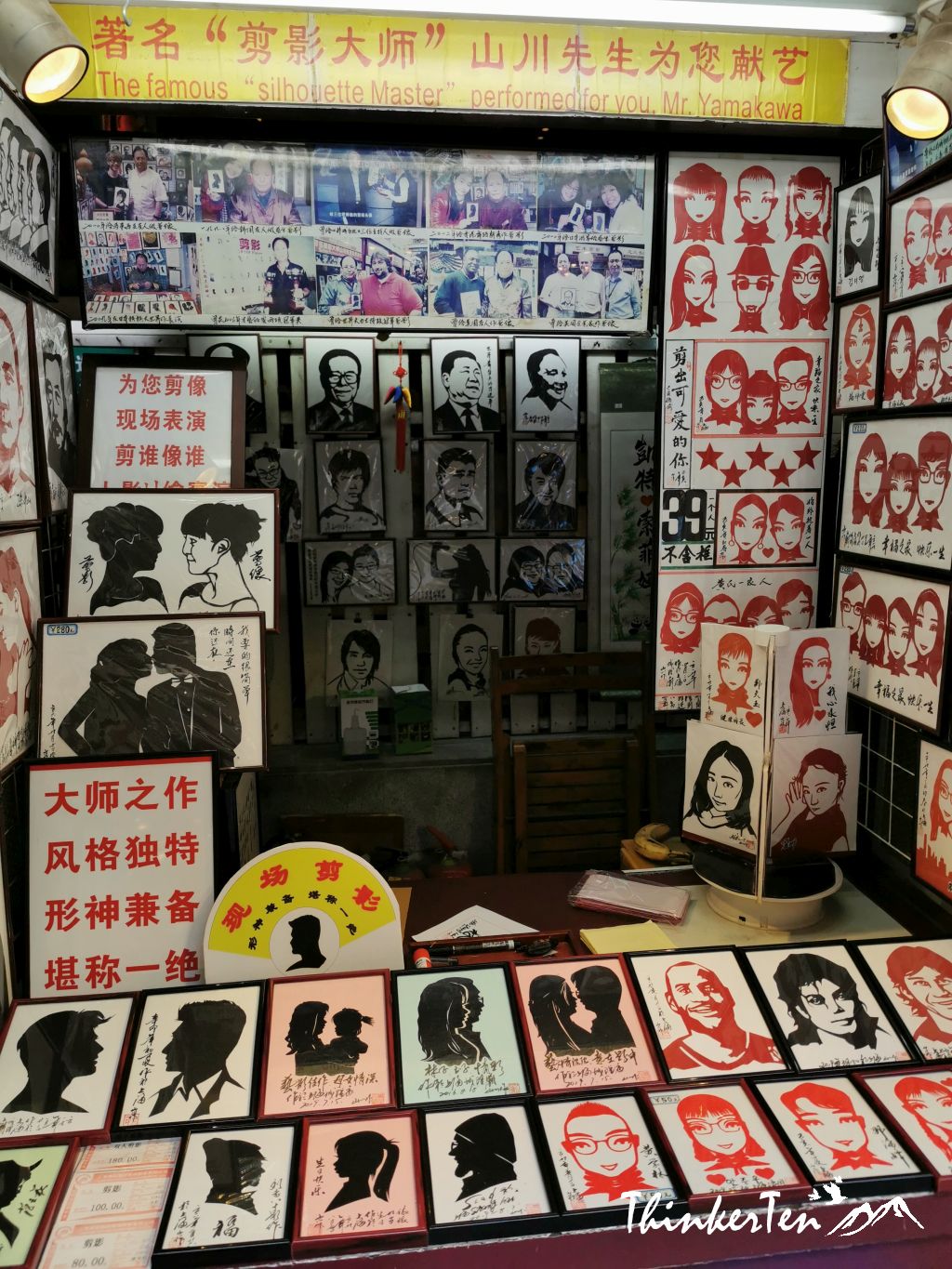 This is similar to a food court that sells all the local snacks.  We had stinky tofu, soft tofu, Chinese pancakes and many more snacks here. 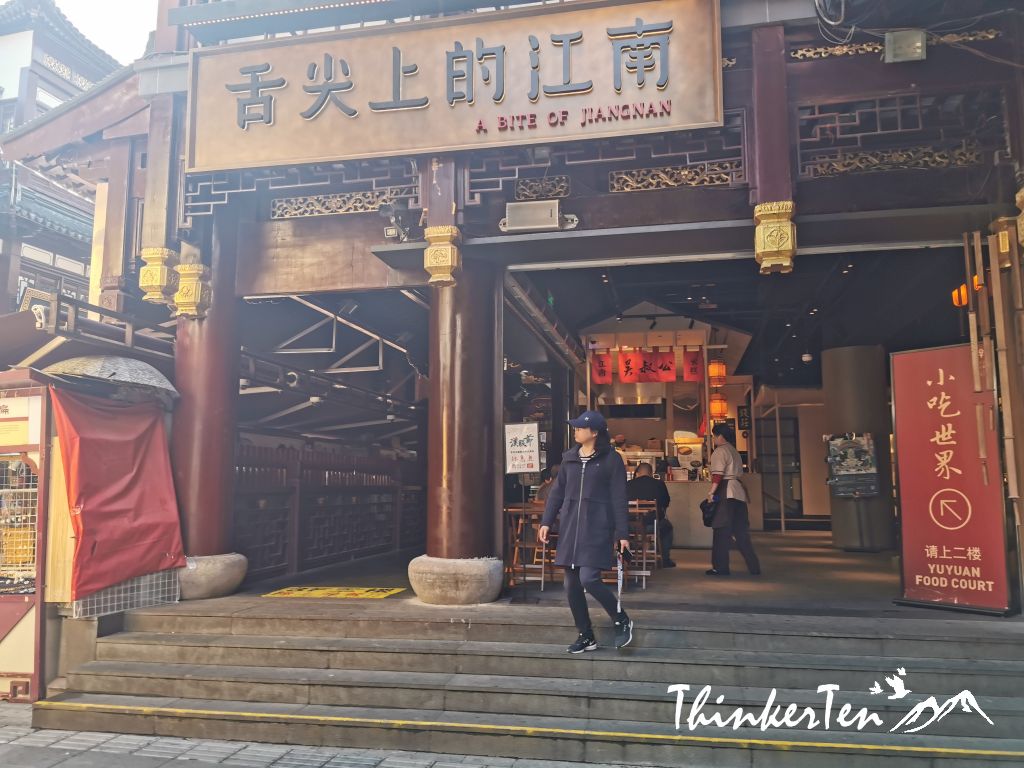 Can you spot the Chinese Pavillion for the Shanghai World Expo 2010? It is also known as “The Crown of the East,” which has a distinctive roof. 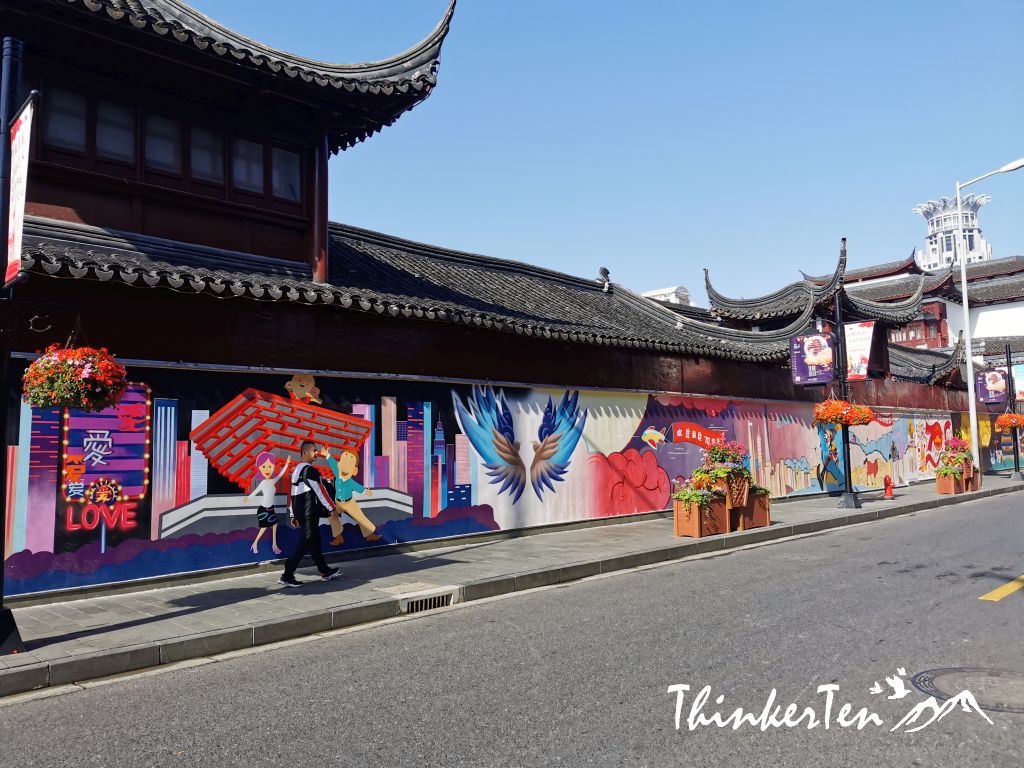 For many Chinese, wearing a wig is a new trend and fashion. Over here you will find a variety of human hair wigs and synthetic hair products.  If you need a hair extension or a new style, check this out. 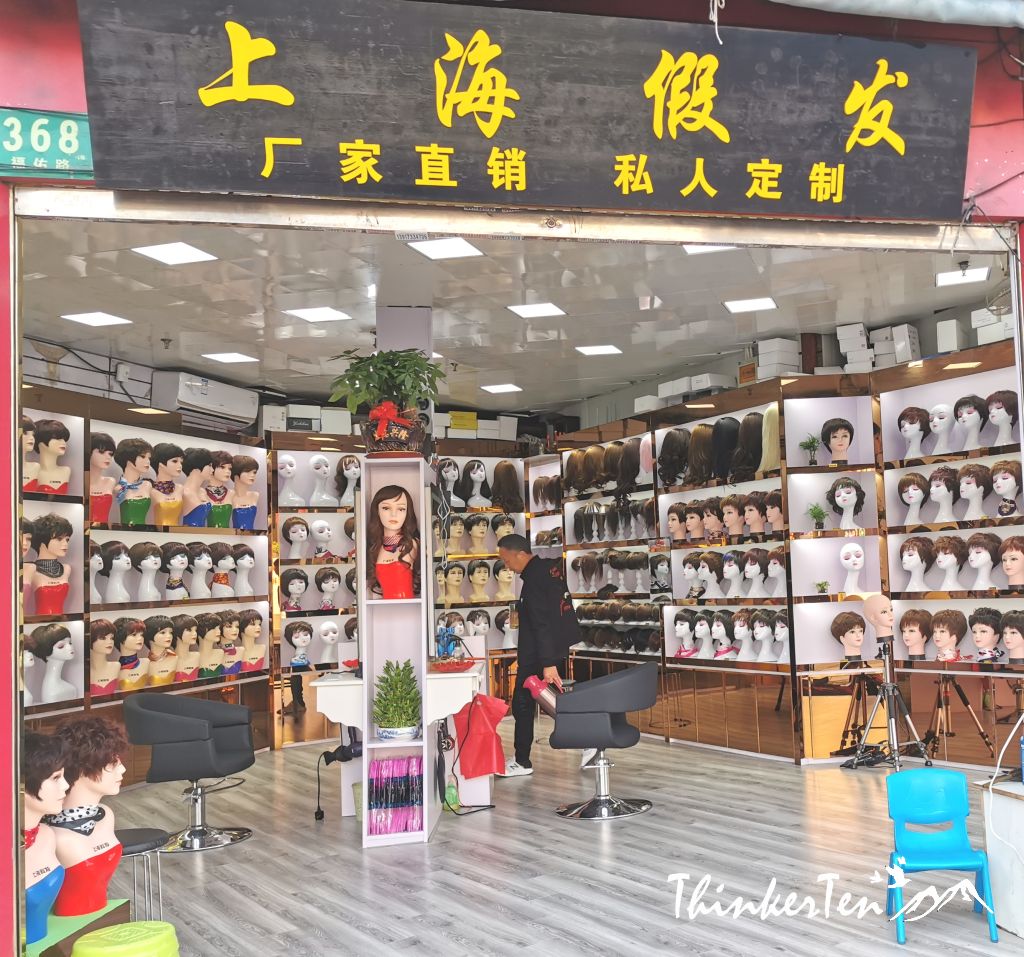 WeChat Pay and Alipay are two of the most popular mobile payment methods in China. Most people do not use cash anymore. All you have to do is just scan the barcodes or QR code on phones when doing the purchase. Visa and Mastercard are not widely used but you can still use them in big hotels.  This little kiosk has the QR code on the basket for the customer to scan them. 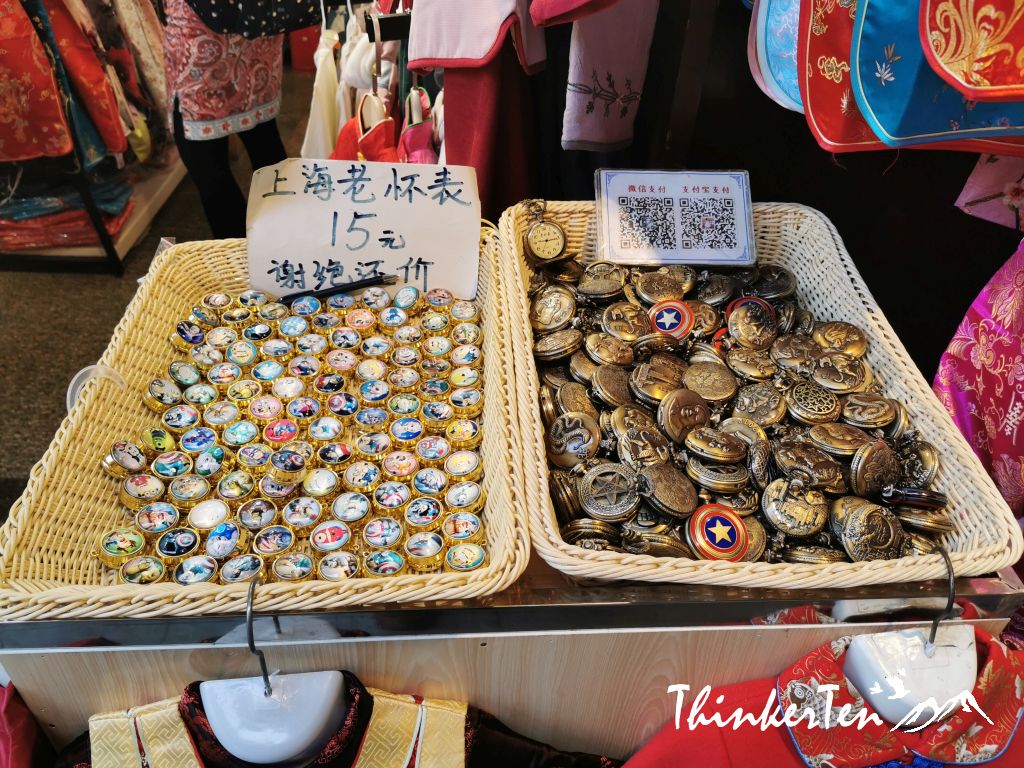 Even though it is the second time visiting Cheng Huang Miao Shanghai, I still find the place is full of interesting finds, the Shanghai street snacks and the skilled craftsman works are just awesome. 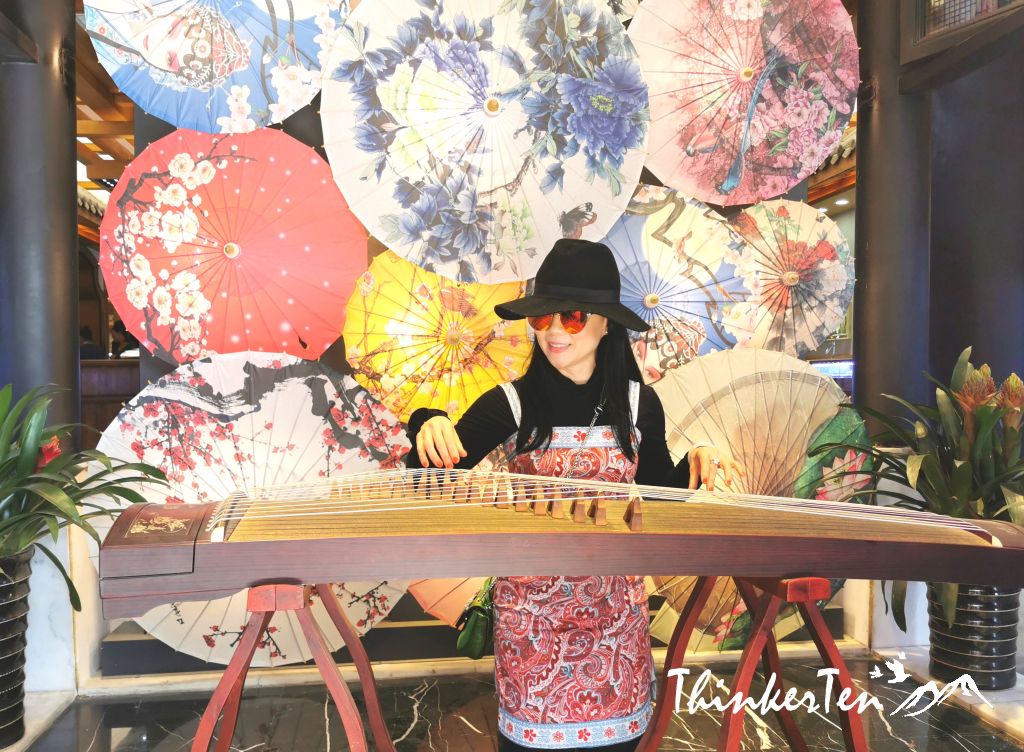 It looks like an incredible place to explore, I’d love to visit with my son one day

I’ve been to China but never had a chance to visit Cheng Huang Mia, Shanghai. It’s really a beautiful city and I will definitely visit this place once I go back to China.

I have never been to Shanghai particularly to Cheng Huang Mia and I will definitely add this to my bucket list and hope to see explore this city someday!

What an incredible place to check out! I love the architecture of the city…absolutely beautiful!

I have always wanted to visit China. I have heard great things.

There are so many places in China I want to visit. I am bookmarking this page to come back to because I REALLY am interested in this area. Your photos and verbage are incredible! Thanks so much!

These sound like great places to visit! I can’t wait to visit China one day.

I absolute love Shanghai! Yuyuan Bazaar is definitely a place you won’t want to miss. I wish I hit those other spots you listed when I was there, but I will definitely be back!

that cream is fantastic ! i was gifted one from my friend ! also there is so much to see in Shanghai – kind regards pati robins

I LOVE all the colors! The buildings, the clothing, the vendors…Really makes me interested in visiting one day

My husband has just returned from his Shanghai business trip, but this time he couldn’t explore the place due to limited time! He is going there next week again, so this post will come handy now

I can’t wait to use this guide when I visit China! It’s on my bucket list!