I have been to Japan many times, and I also lived and studied in Kyushu for few years. However traveling to Chubu region was my first time.  Chubu mean Central, so we were about to explore 8 days self drive in Chubu Japan.  This region is the widest part of Honshu and has 9 prefectures in total.  Chubu is also famous for it high and rugged mountains.

We arrived at Nagoya Airport at 8am and we immediately looked for the car rental outlet which we had already booked online.  All the car rentals outlets are located at the basement airport car park.  We went to Nissan car rental outlet to get our rental Nissan Sylphy.  The seats in the Nissan Sylphy is quite spacious but I find the boot is a bit small.  It is a bit hard to squeeze in two large suitcases.  If you have 2 large suitcases, you may want to consider using Toyota Camry or Toyota Altis as the boots are bigger.

There was a GPS attached to the car and I find the GPS in Japan is really accurate and smart.  Driver seat is at the right hand side, same as the other commonwealth countries. We obtained our international driving permit which last for 1 year before we arrived to Japan.  The roads in Japan are quite narrow in the cities but quite spacious in the freeway.

Driving in Japan is quite easy as most Japanese drivers are kind and patient with each other and quite civilized.  After all, Japanese nation were impeccably well mannered.

Highway in Japan use ETC card, but we did not have the ETC, so we used cash.  Toll attendant will be there to give you change and receipts, they may look old but they are still very efficient and polite to serve you.

It took us less than 2 hours to arrive to our first destination, Togokusan Fruit Park. There is a huge car park opposite of the Fruit park, parking is free.

We had an early lunch in the restaurant in the Fruits Park.  We ordered udon noodles and the restaurants also served free persimmons and we can eat all we want. 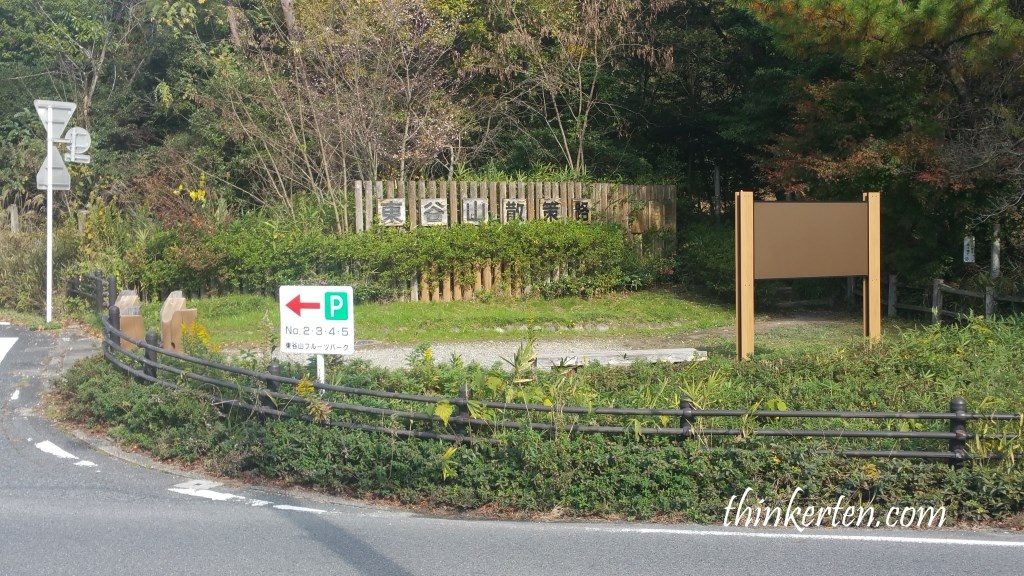 I heard the best time to visit this park is in April when the cherry blossom season, but we were here in the month of November, early winter. 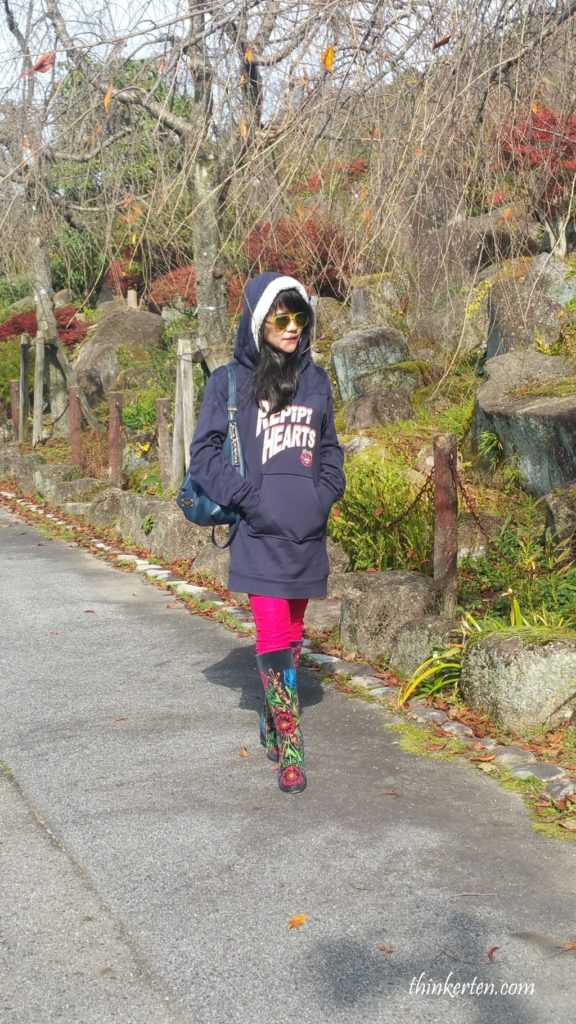 Togokusan is about 198.3meters above sea level, but it was quite warm when we were there in the morning 10am, partly because it was a sunny day. 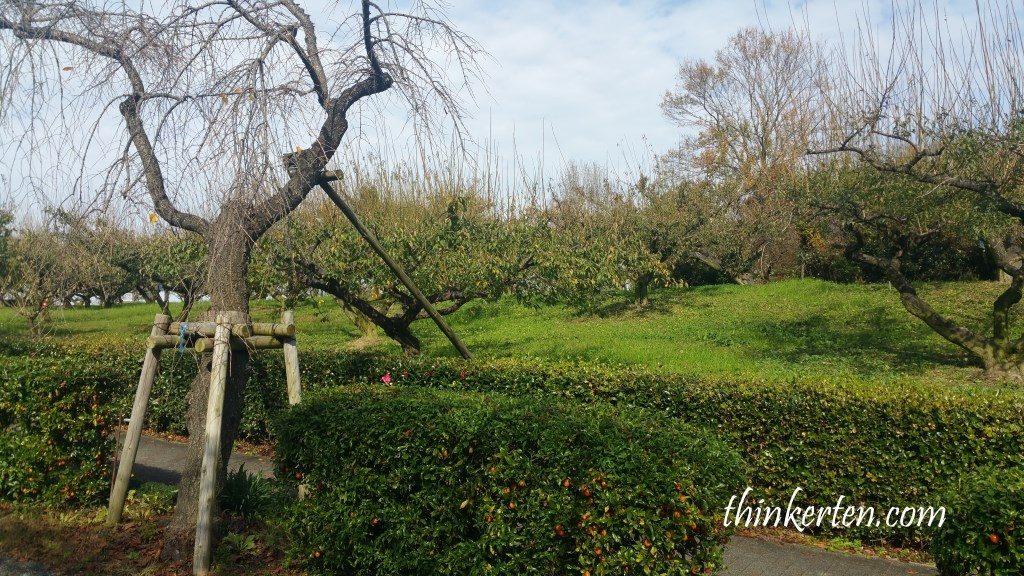 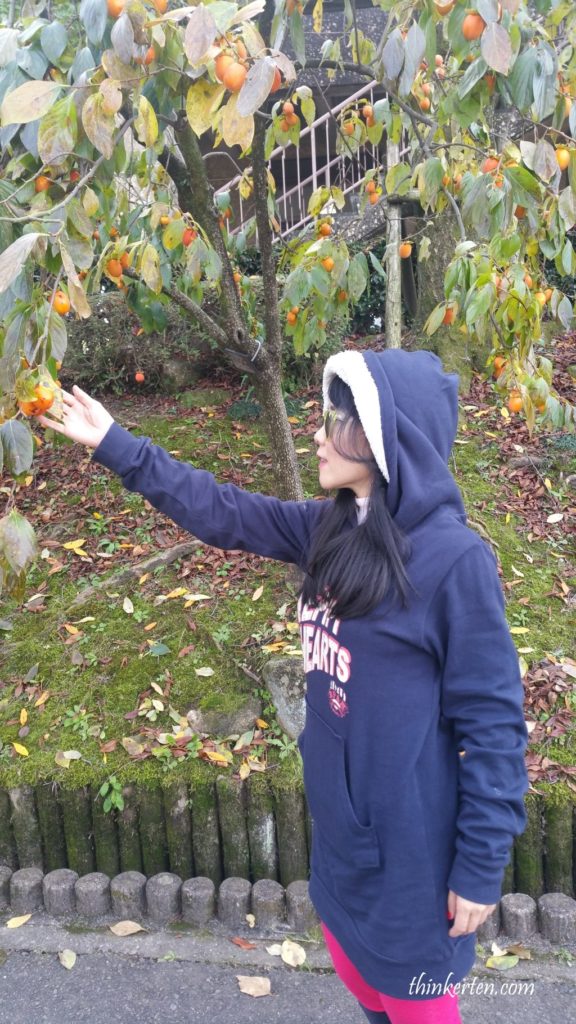 Persimmons are a popular autumn fruit in Japan however we were lucky to see the persimmons in early winter.  It is native to China, and spread to Japan more than 1,000 years ago.

Japanese also likes to hang the persimmons and dried them,  this way, the persimmon can be kept longer.  The dried persimmon is called Hoshigaki.  Japanese used them in the new year as part of the decoration ornament with big rice cake. 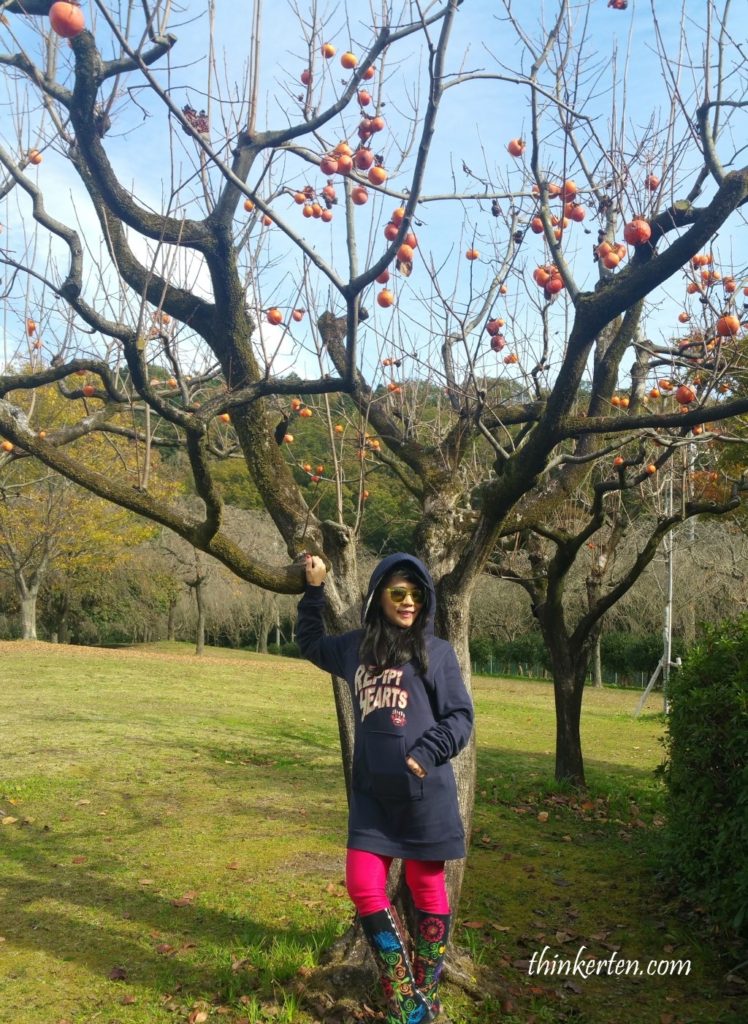 I simply love persimmons and their trees, the dark orange color persimmon fruits look very cute hanging on the trees without any leaves, very much like the feeling in autumn.

These yellow oval fruits, growing in clusters look like loquat/pi pa to me.  The flowers have a sweet, heady aroma that can be smelled from a distance.  Loquat is originally from China as well and it was introduced and cultivated in Japan over 1000 years. 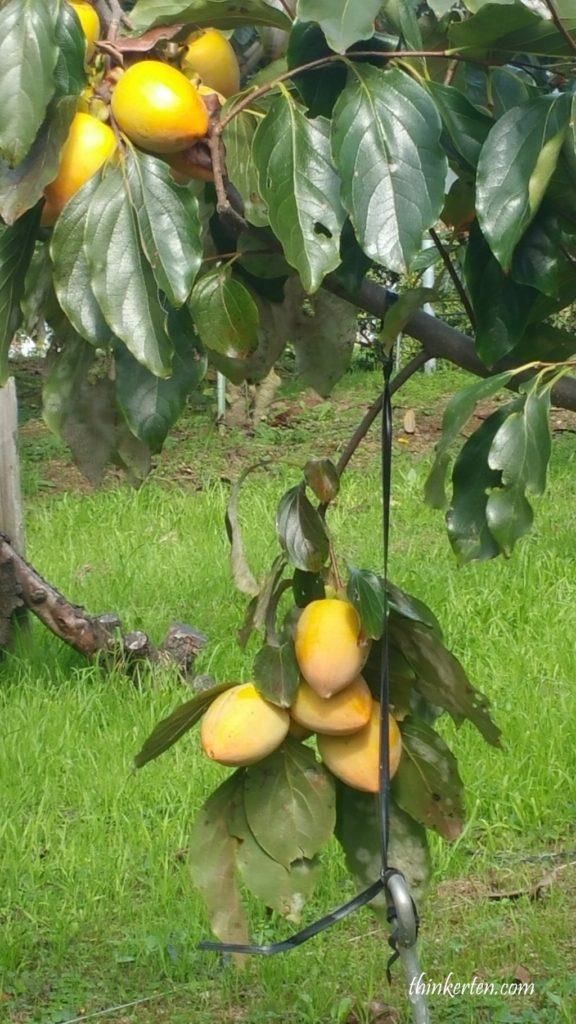 We also passed by the “mikan garden” / citrus fruits.  We called it mandarin or tangerine. Mikan normally available in the early winter, that was why the mikan garden were full of mikan when we visited in November.  Similar to Chinese, Japanese New Year celebrations often include some Mikan, because they ripen at just the right time. 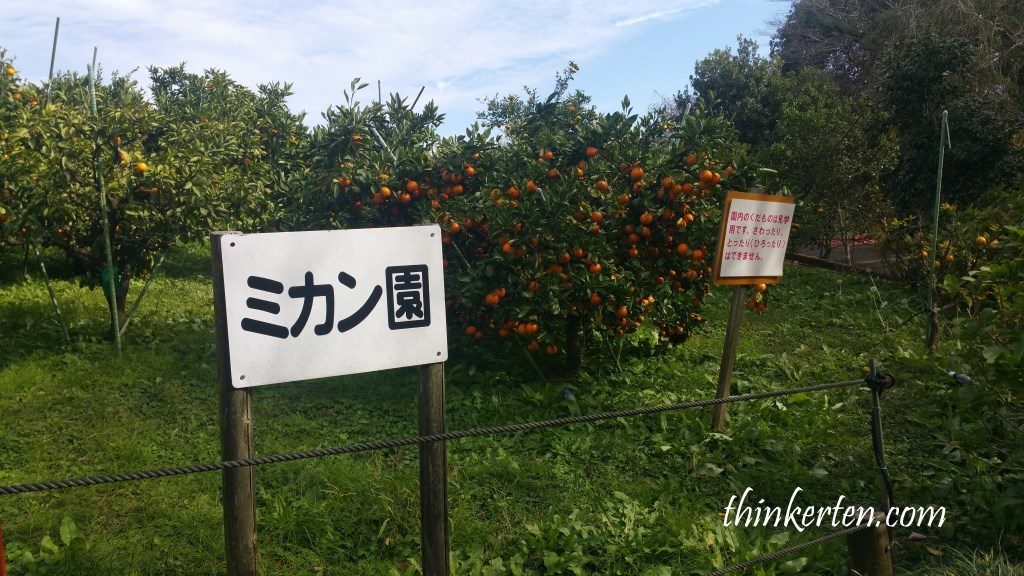 Fruit picking is a popular family activity in Japan, I saw many families with small children came to pick fruit directly from the tree in the orchard.  There is also a fee charge for visitors for fruit picking activities. 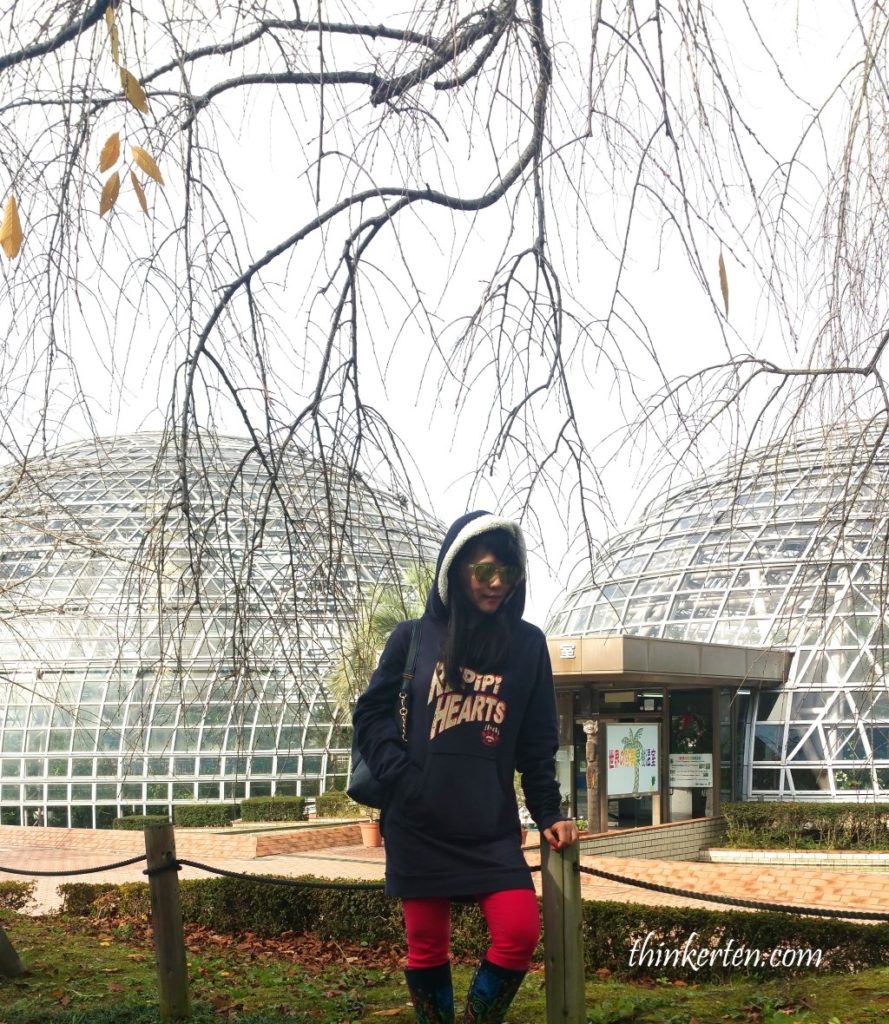 There is also indoor garden in the park, it was quite warm inside the garden and tropical fruits and plants were found planting beautifully in the indoor garden. 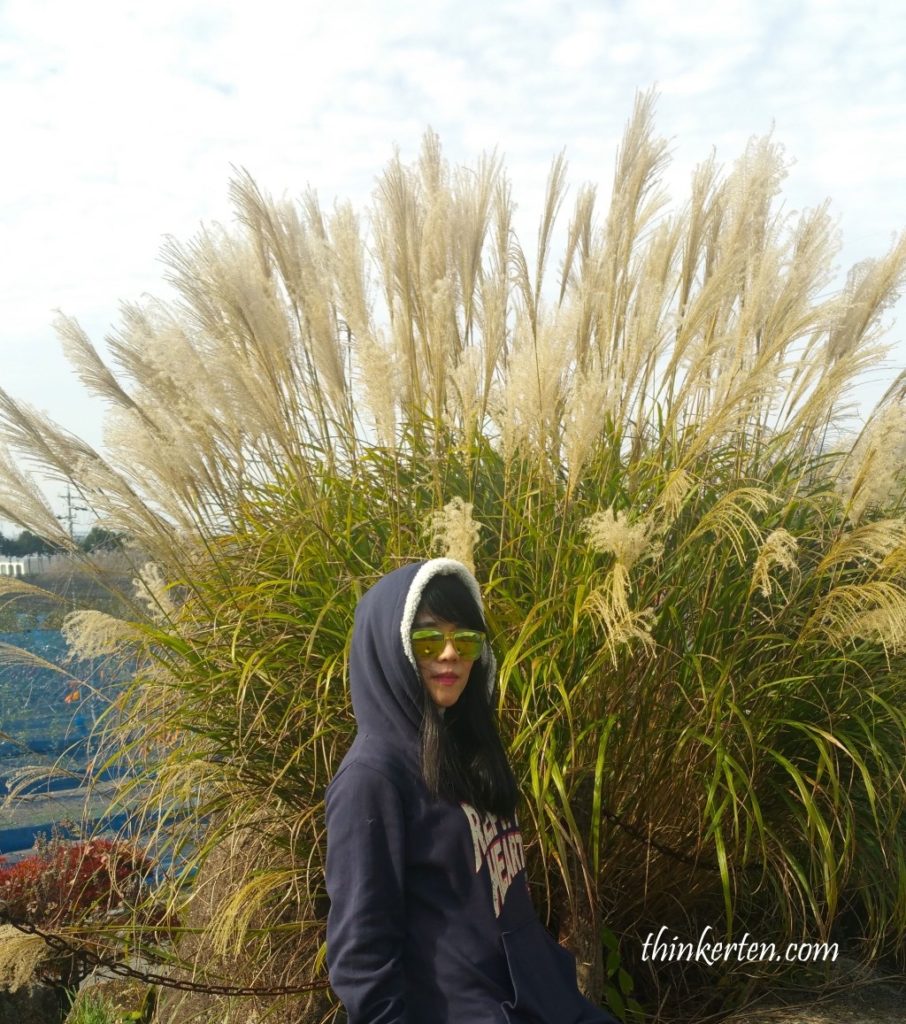 It was really a nice sunny day in the early winter, weather was great to shoot more pictures. 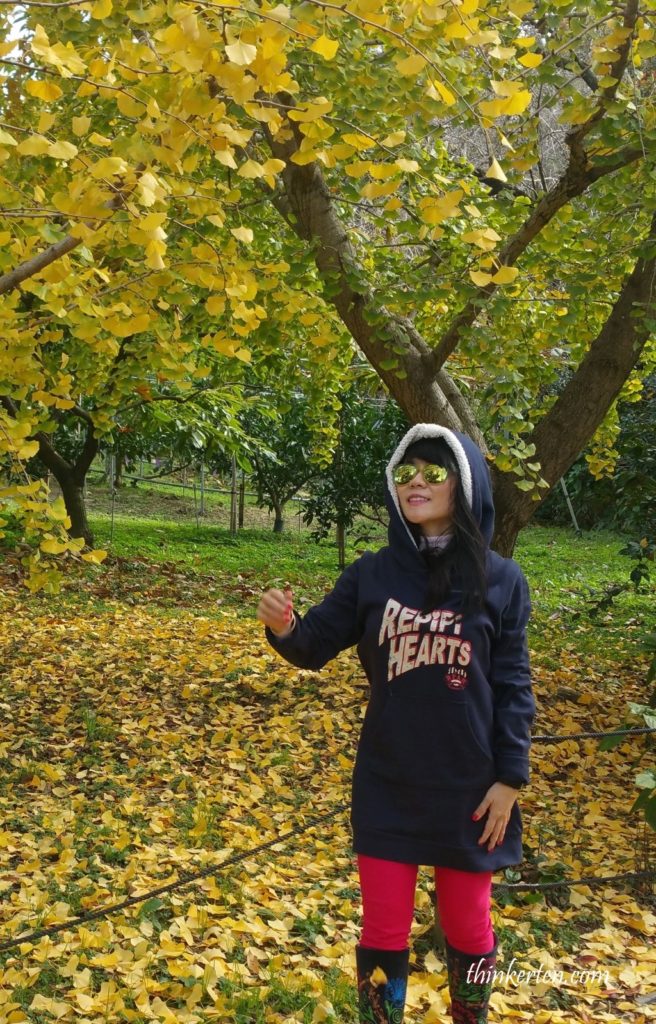 Ginkgo tree or the Maidenhair tree also known as “autumn gold” is particularly stunning in the autumn.  Maidenhair tree has been described as a ‘living fossil’ because it is the sole survivor of an ancient group of trees older than the dinosaurs.  I simply love the yellow leaves falling down on me. 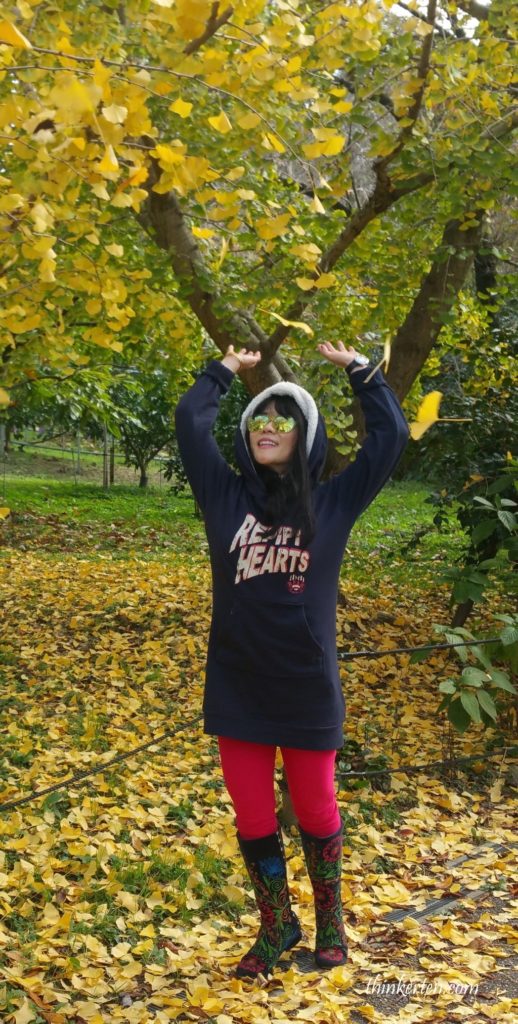 Japan is also famous for their red maple leaves in autumn. People normally rushed to see the ‘Koyo”/紅葉 from October till November.  We were lucky we were still able to enjoy the “Koyo”.  “Koyo” refers to the phenomenon of changing autumn colors. 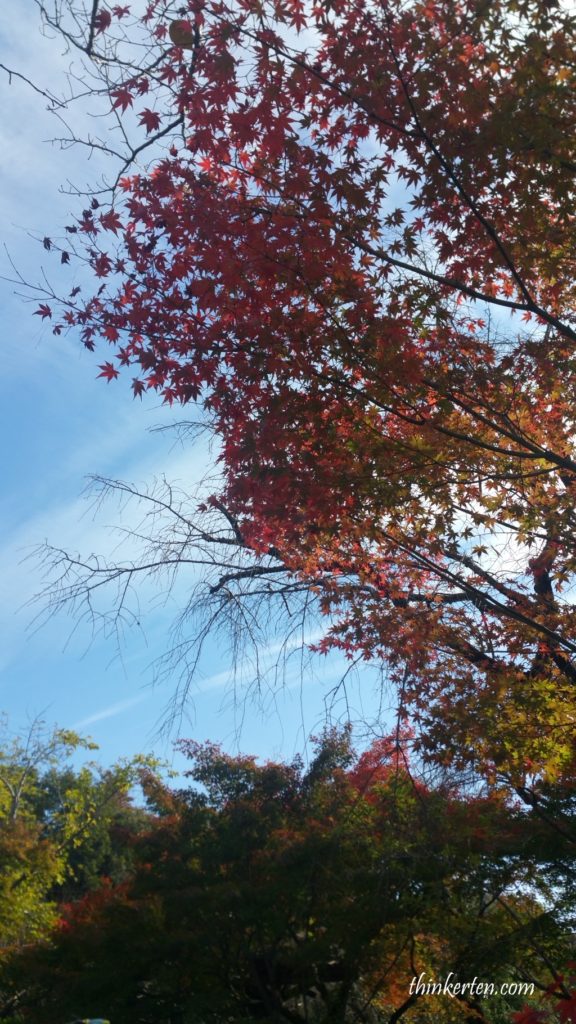 It took us about 2 hours to arrive Magome.  It was a mountainous ride but there were not many cars. 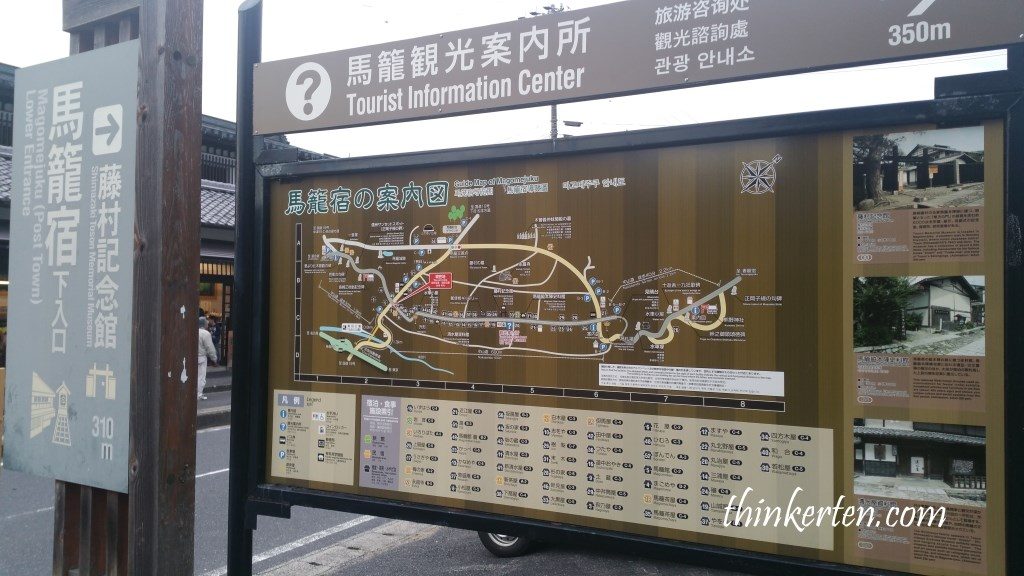 Magome is a small post town which served travelers connecting the major route from Tokyo and Kyoto in Edo period, 300-400 years ago. 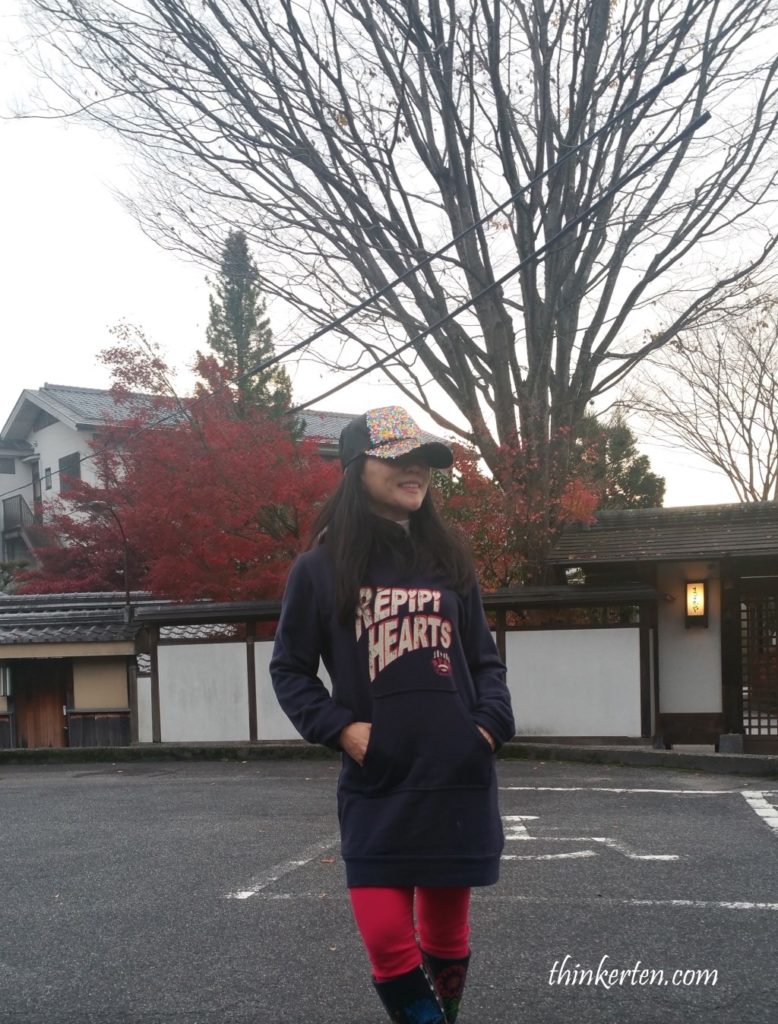 This is a very beautiful old town. It still maintains everything from old time. You can see the spring water goes through the front of houses.  There is also a nice water mill there to attract tourists.  You won’t get bored by just admiring every houses you passed by. 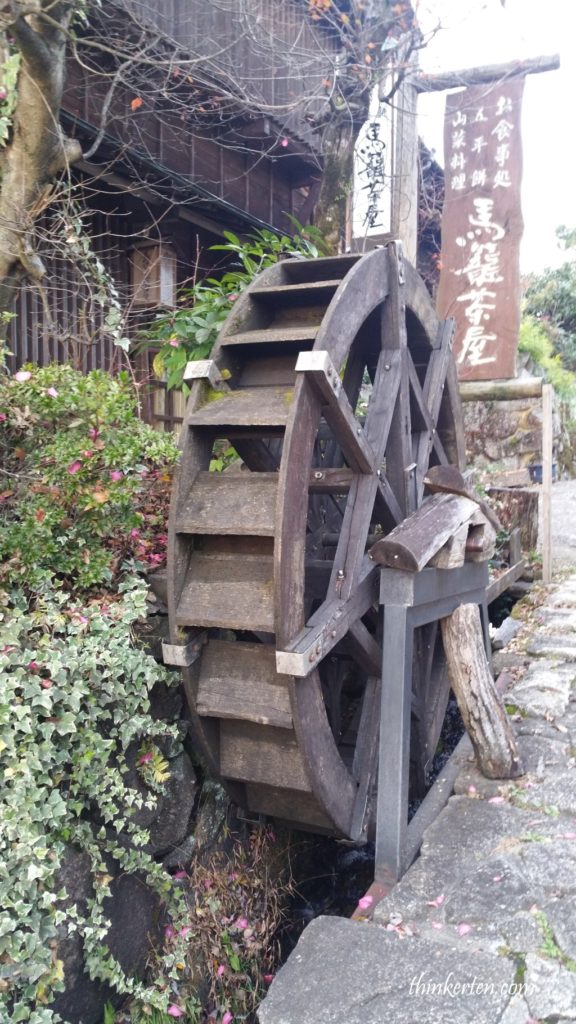 It is undoubtedly a beautiful historical town, the main street up the hill is full of small shops with some interesting handicrafts and local foods.  Magome is nicely situated with the rather steep streets and you need some energy to walk up the hill.  Some old folks were using the walking sticks to help them moving uphill. 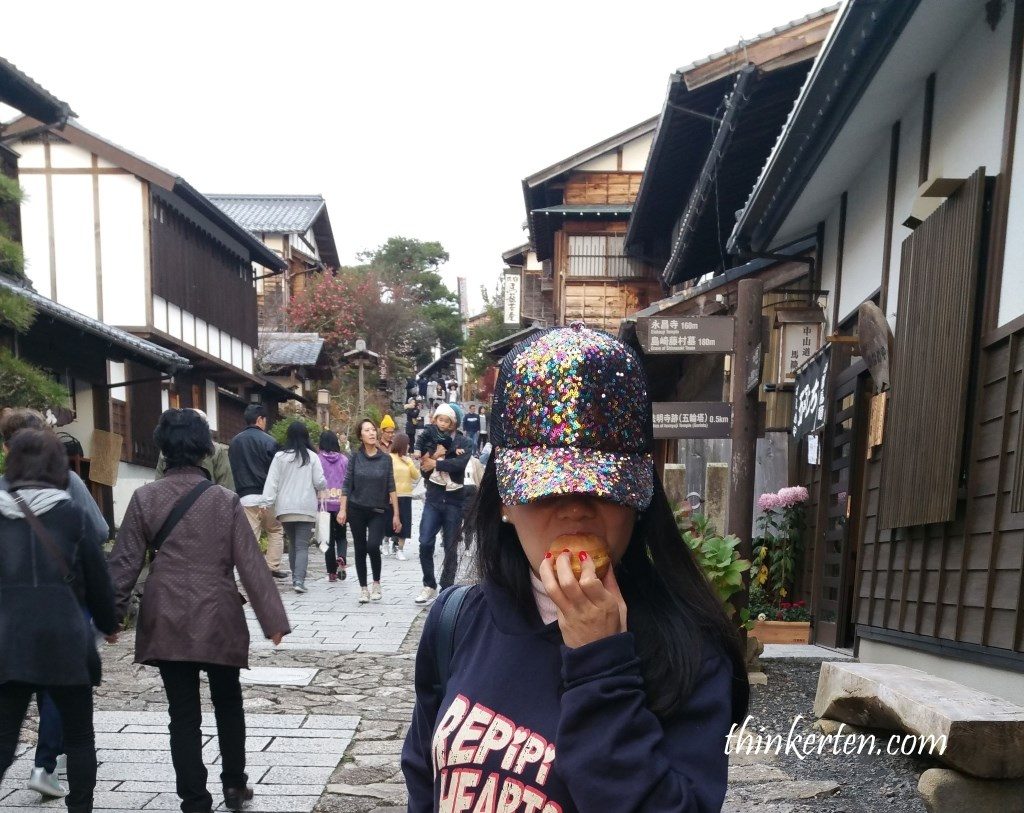 I bought one hot big “manju” in one of the stall.  Manju was originally called Mantou from China.  The manju in Japan normally tasted sweet, filled with sweet bean.  The one I had in the picture was Azuki Manju/ red bean manju.

Visitors came here to enjoy the traditional atmosphere, with the ancient houses and cobblestones streets.  At the top of the central road, the view is amazing.  It is undoubtedly a beautiful historical town not to be missed if you are in Gifu. 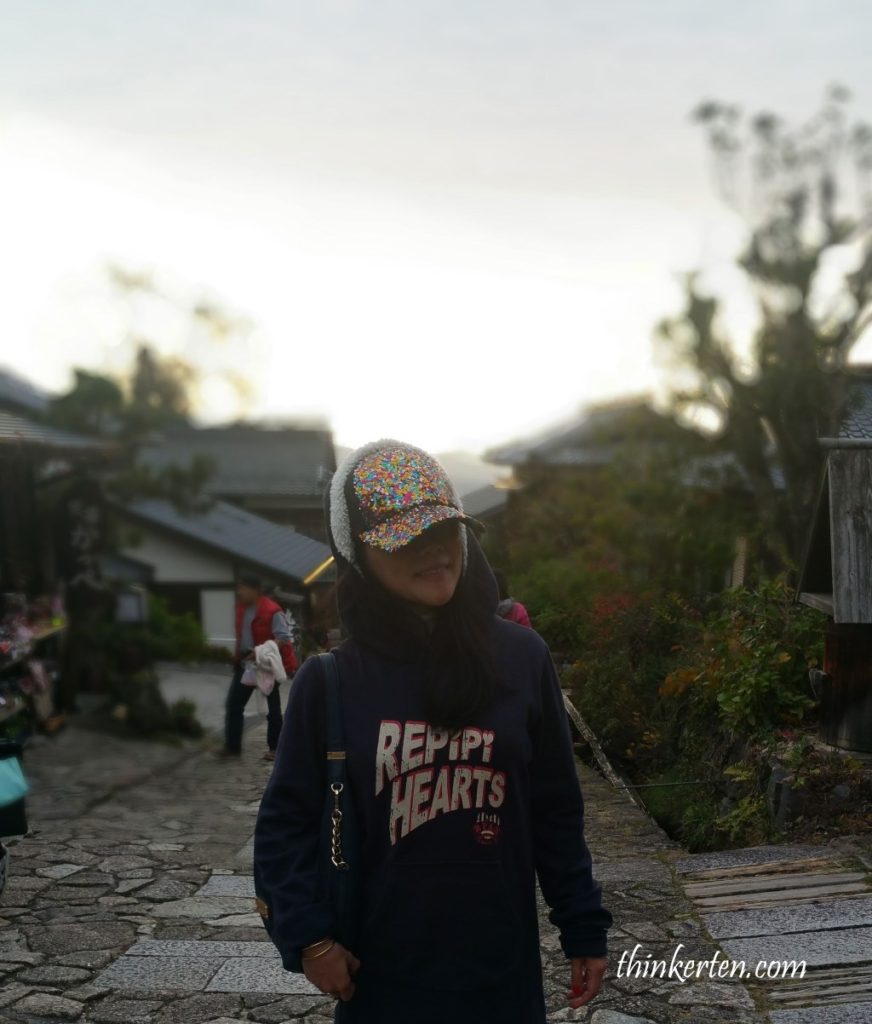 Today I feel like I fall back to be a Gesha walking in the old town of Magome in Edo period, except I was not wearing kimono. 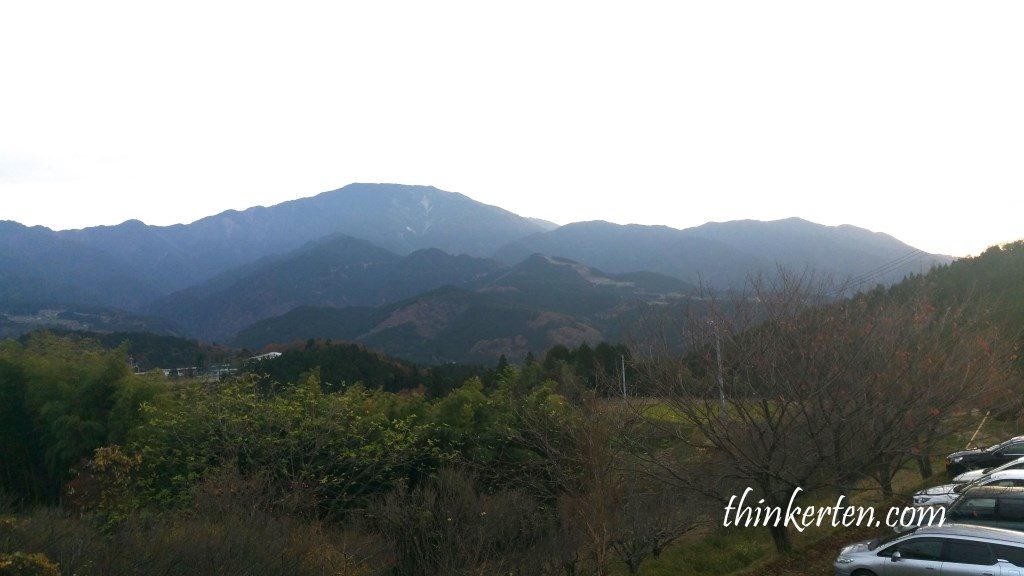 We went back to the car park to pick up our car before the sunset as it could be completely dark without any street light.  This place is quite “inaka” – countryside. 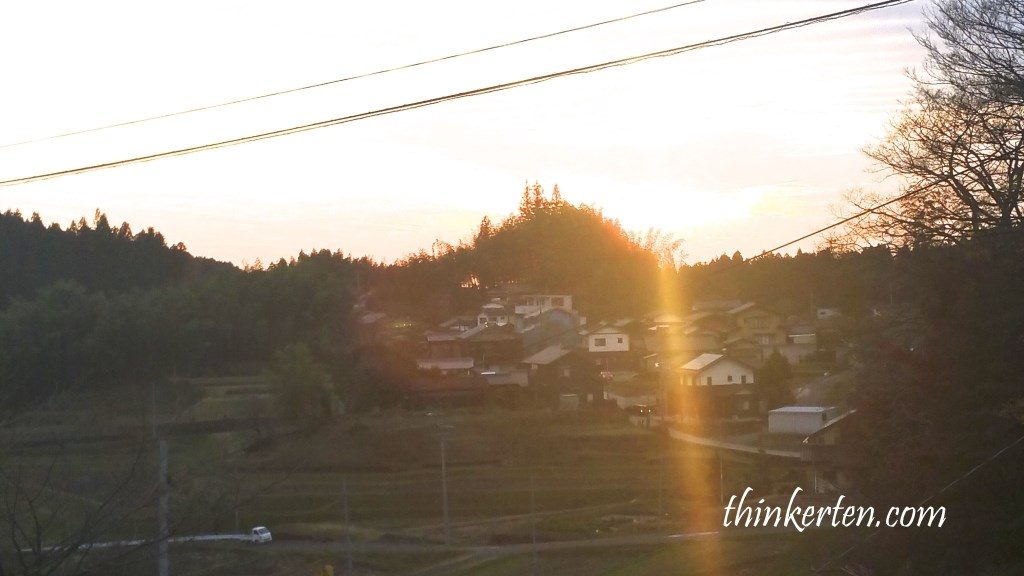 We stayed in Hotel Route Inn Nakatsugawa on our first night, simply because it was just about half an hour drive from Magome old town.  What I like the most is there are few “family restaurants” next to the Hotel.

Throughout our 8 days in Japan, we like to go to the “family restaurant” for our meals, mainly because of the easy drive through and big car park.  Most restaurant in Japan limit everything, such as 2 hour seating limit but Family Restaurants have no time limit and the food portion normally are big and cheap.

Most Family restaurant has both Western and Japanese food items on the menu which appeals to all generation from granny to young kids in the family.

Taiwan Self Drive Round The Island – 8 Days Summary Itinerary