A must visit in the capital of Spain,The Royal Palace of Madrid “Palacio Real”

The largest building in Madrid, the capital of Spain, is the Royal Palace of Madrid. There are so many historical and grand buildings surrounding Madrid but the Royal Palace Madrid look the most beautiful.

You should pay a visit to this magnificent palace since it is open to the public. The Royal Palace of Madrid is the official residence for the Royal family but these days they only use it for state ceremonies. In Spanish, it is called Palacio Real was built in the 18th and 19th century.  Some people say it looks like Versailles Palace in Paris.  Well, I don’t really think so, Versailles Palace in Paris used more gold color.

The Royal Palace of Madrid is as beautiful and impressive outside as it is inside. When you are at the courtyard, you will notice there are 2 types of materials,  the white limestones, and granite used to build the palaces which create the contrast. 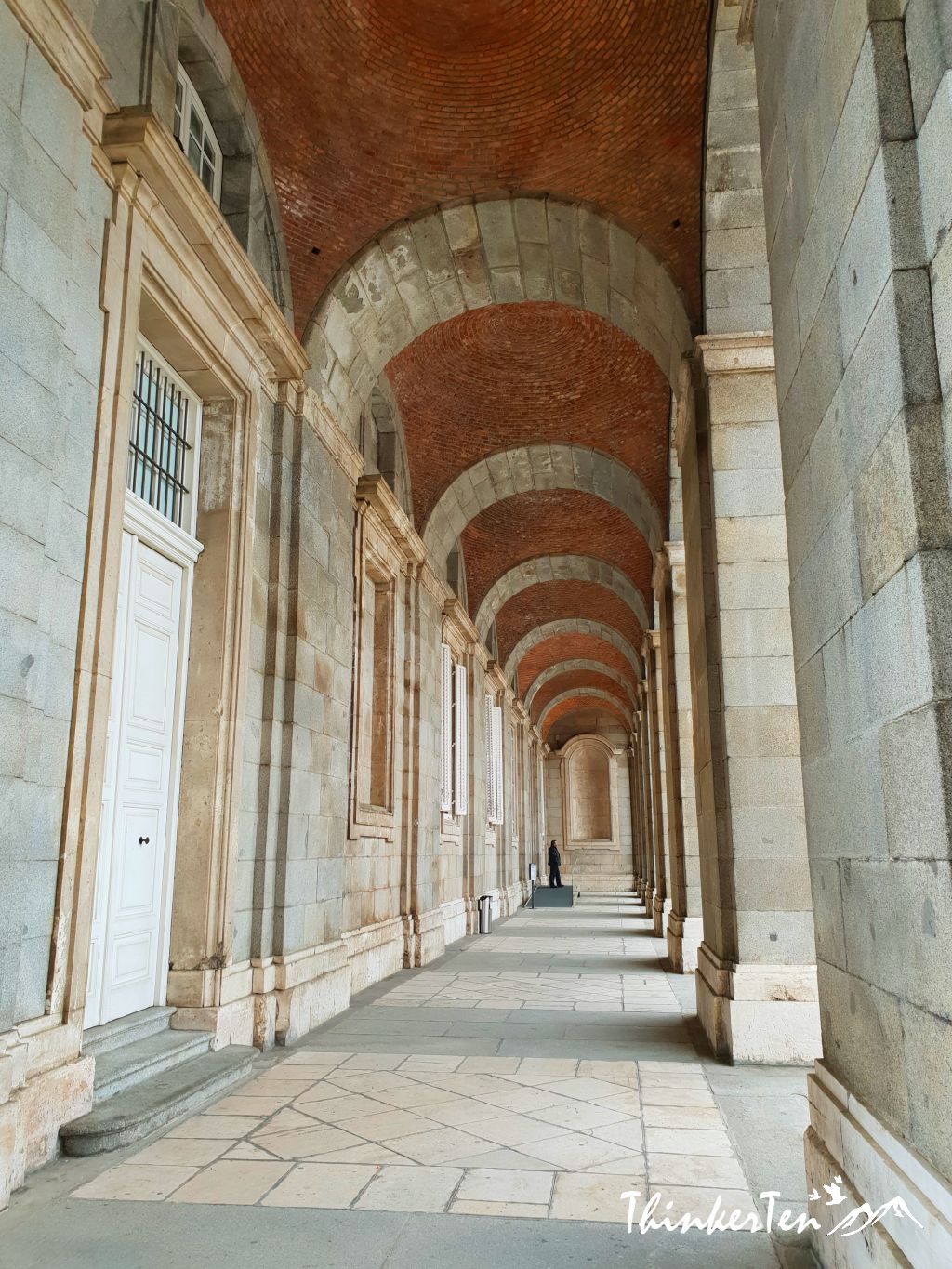 A big portrait of the current Spanish Royal family greeted us when we entered the interior. 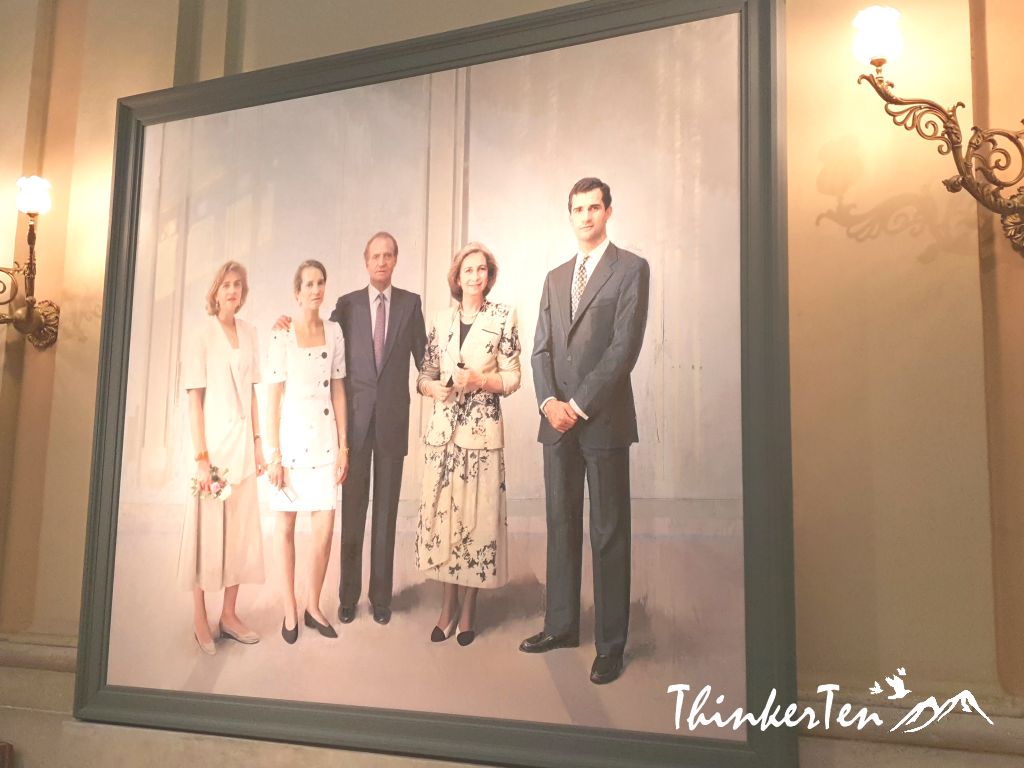 The interior of the Royal Palace is truly a site of wealth and beauty. Total of 3,418 rooms but only a few of them are open to the public. Some section of the palace allows photography with no flash but some sections are not allowed photography at all.

The grand staircase is made of marble and built with very low steps. Two lions at the side. The ceiling is breathtaking if you raise your head up to view the details done by the Italian painter, Corrado Giaquinto depicts Religion Protected by Spain 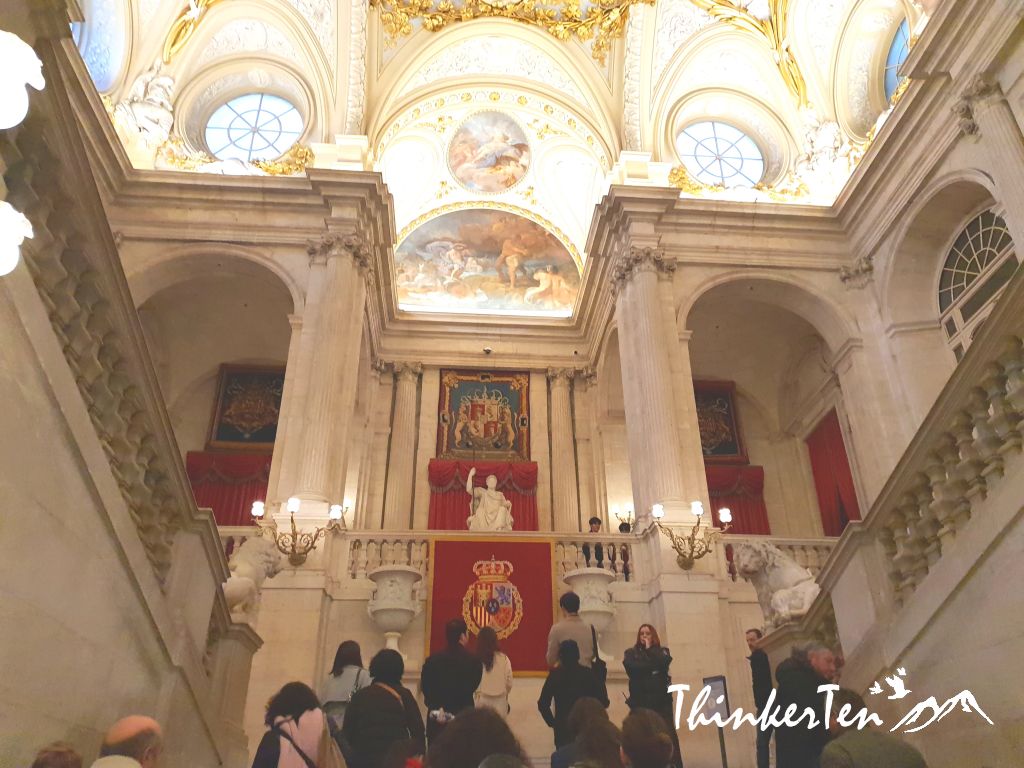 Low marble steps are built at the entrance to the palace, easier to walk in for the King and Queen I guess. 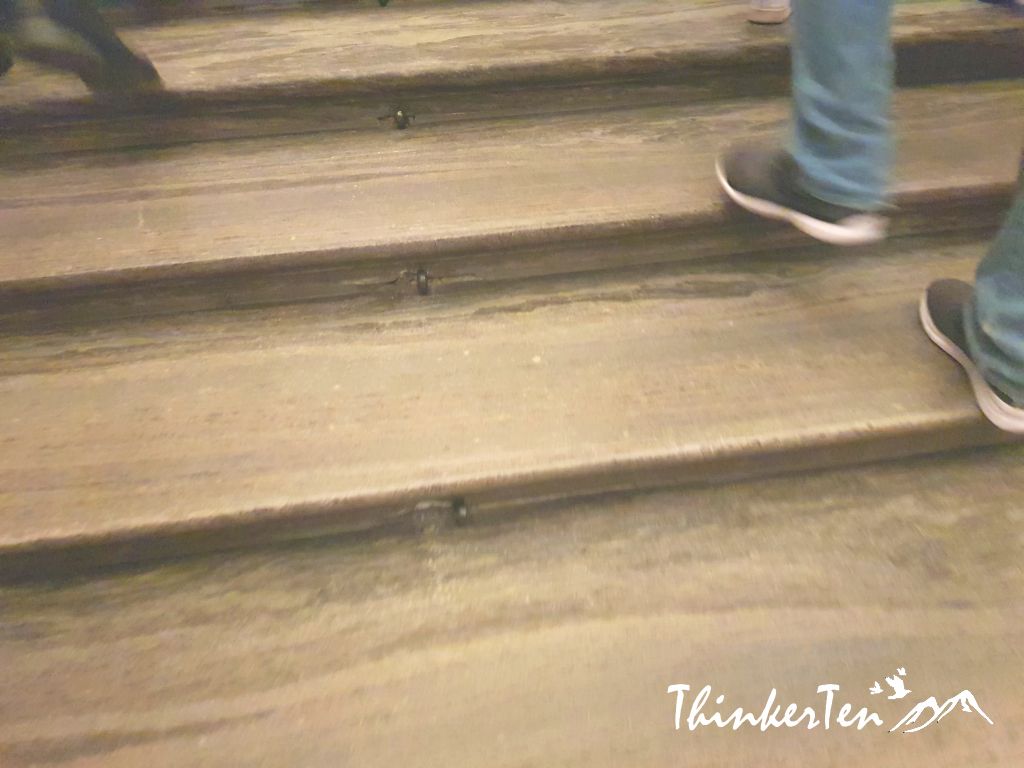 The rooms are decorated with paintings by famous artists like Caravaggio, Velasquez, and Goya and the palace also holds one of the largest collections of historic armor! 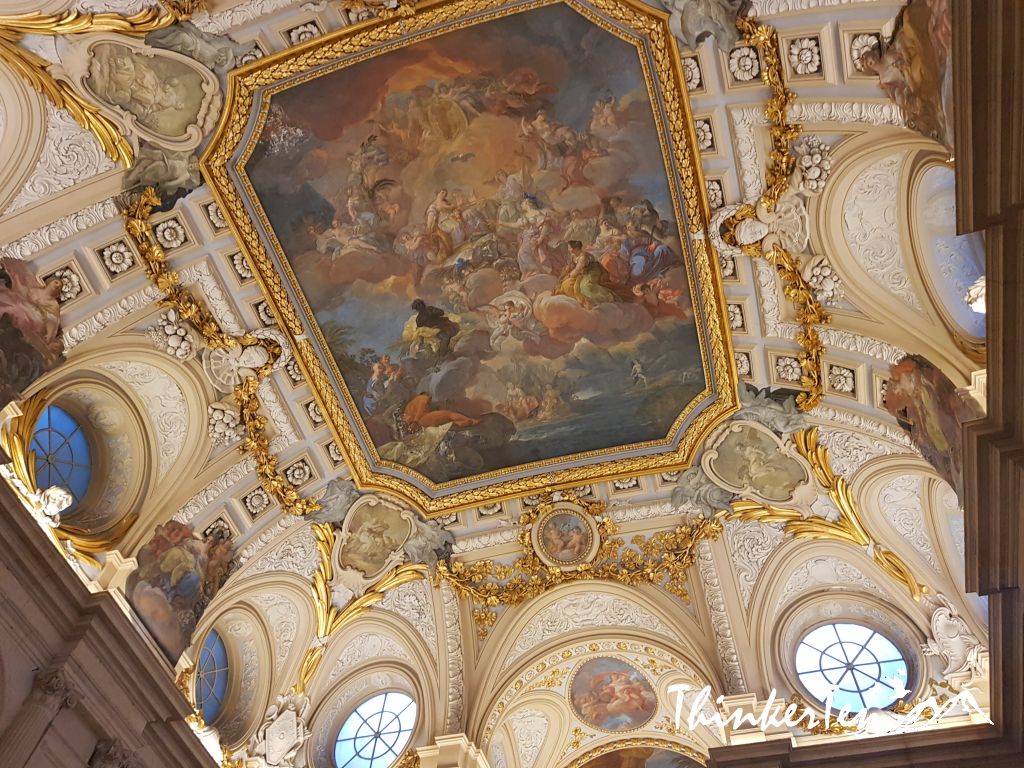 Other treasure found are Porcelain, Furniture, Silverware, and clocks.  There are many clocks in this palace as the previous king was obsessed with clocks.  Most of the clocks are not ticking as it will cause too much noise in this palace. 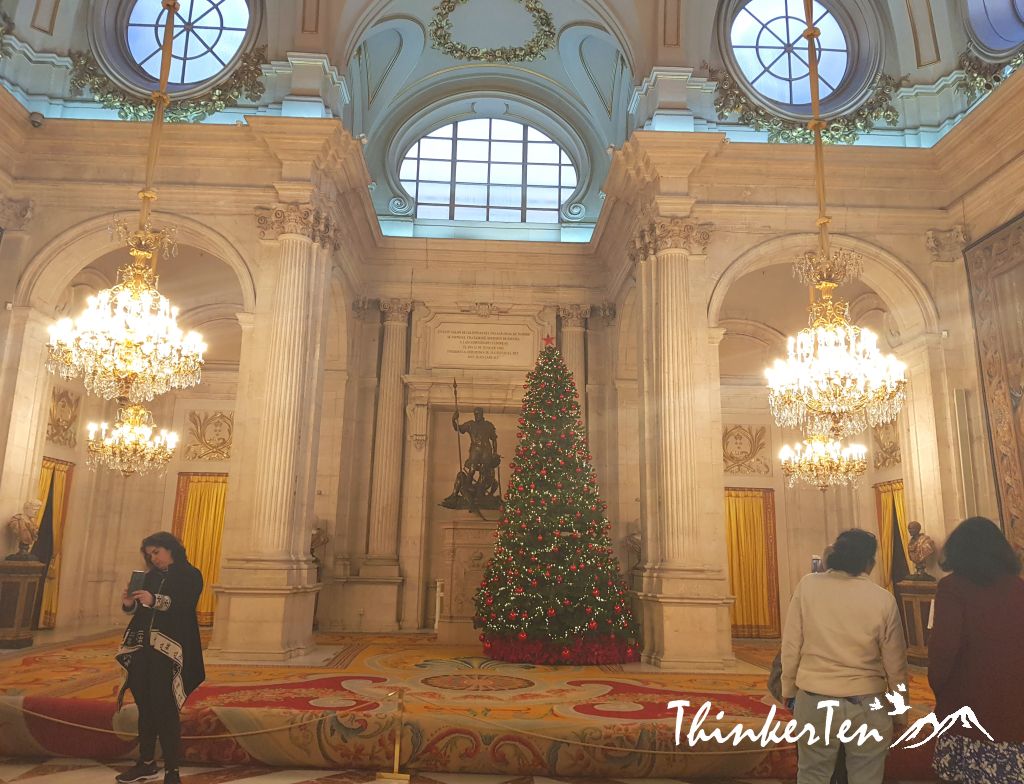 Tapestry collections are still the original, most hanging on the wall. 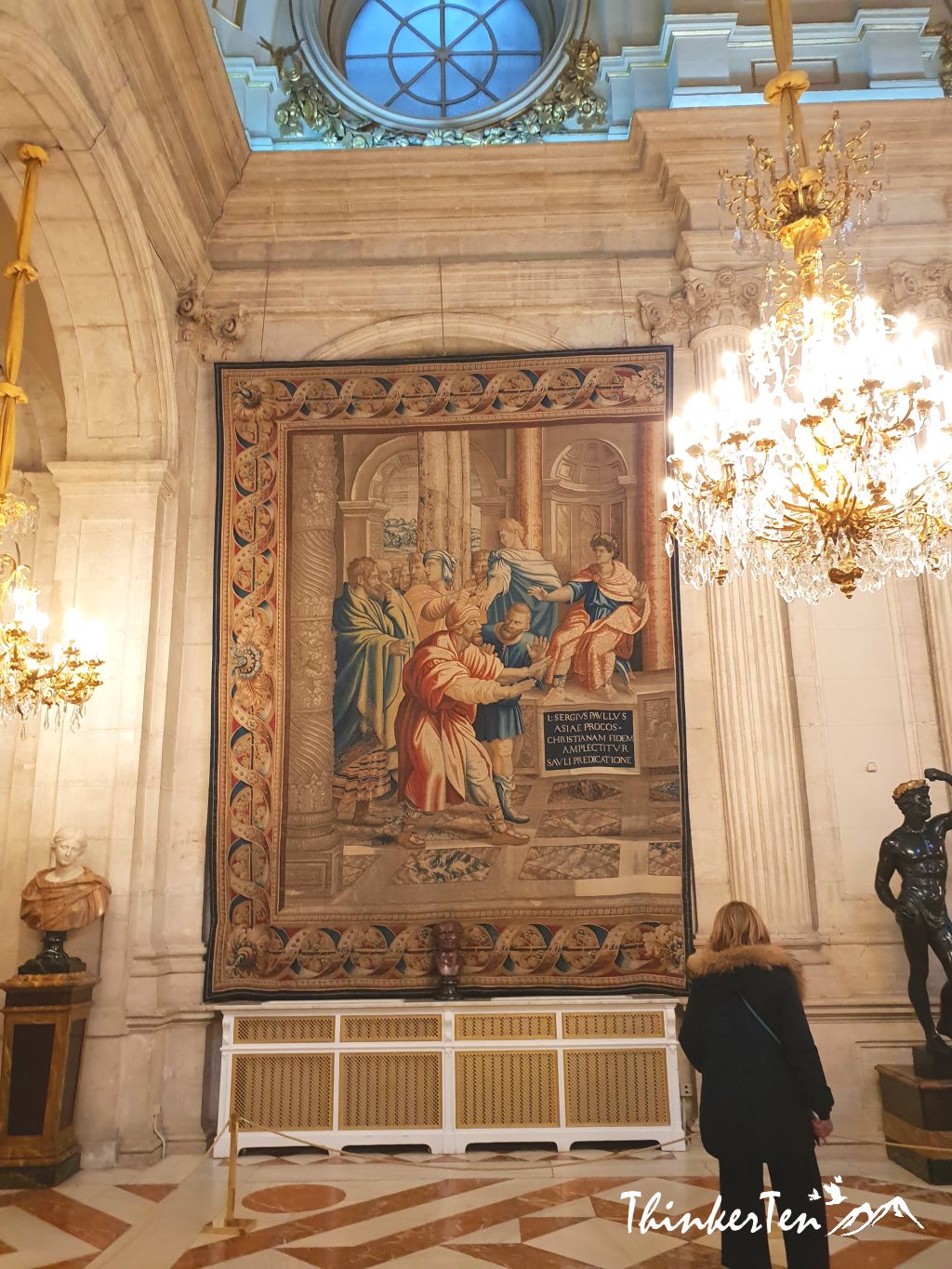 You will notice the carpet on the floor was half rolled as it is because it is not meant for us to walk on.  When the King holds the ceremony for his guests, then the carpet will be opened up.  Remember, Palacio Real – the Royal Palace is still in use. 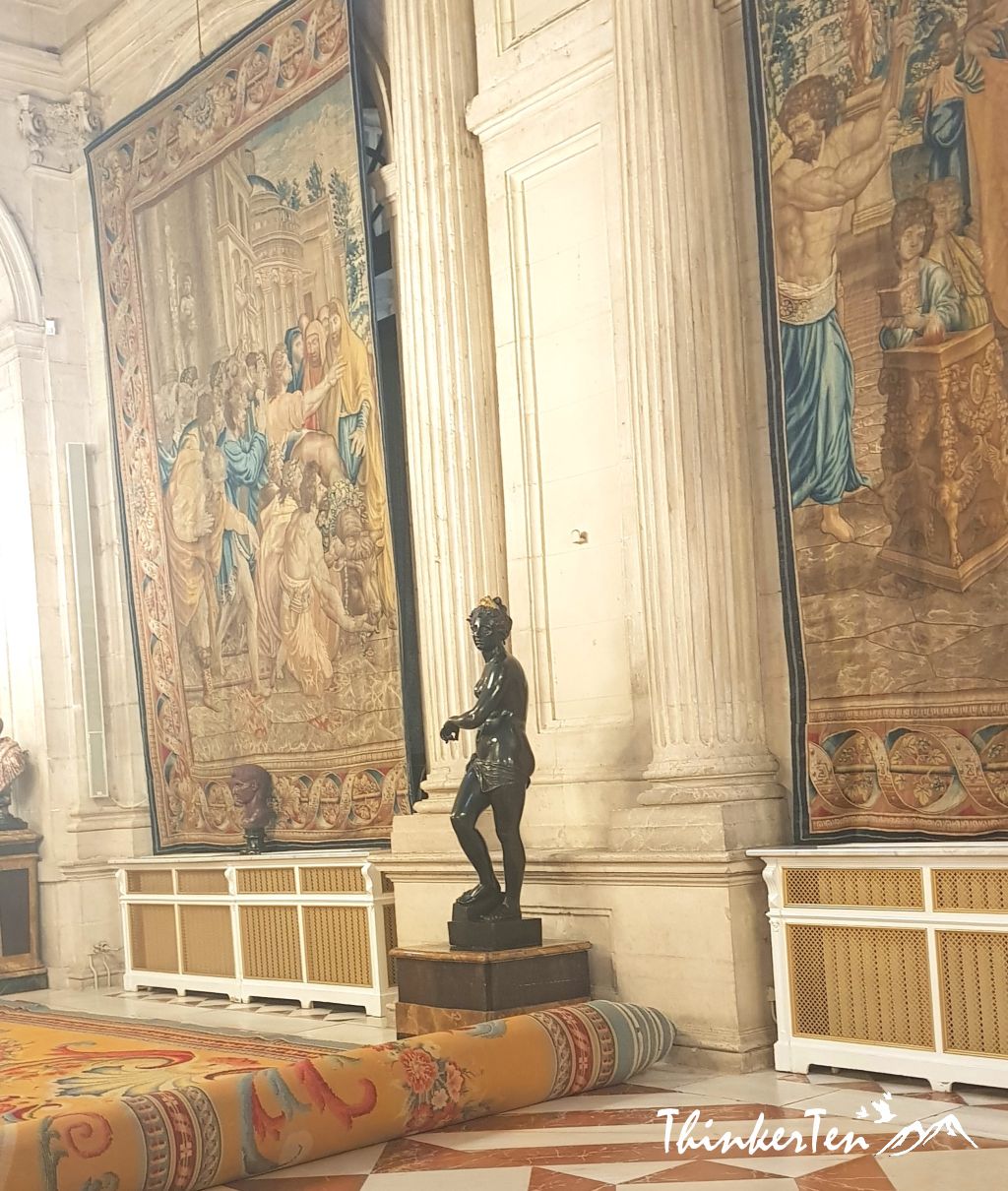 The world most valuable Stradivarius string quintet is in this palace. The Royal Palace’s quartet—two violins, a cello, and a viola. I was told this instrument has to fly separately and not in a single plane for performance as no insurance company dare to cover all in a plane.  There are not many Stradivari instruments survive in the world now. 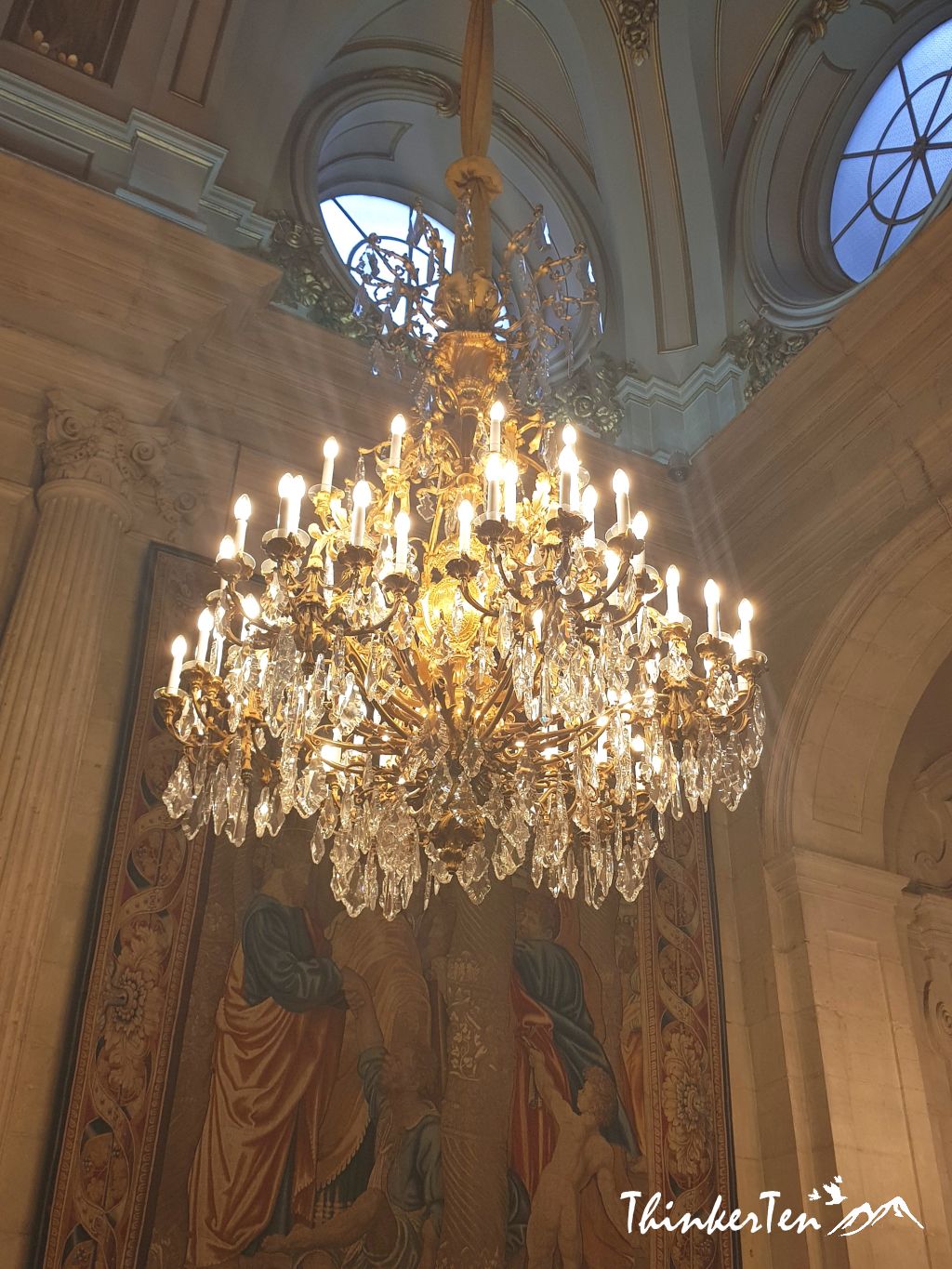 Royal inner courtyard – taking from inside the palace 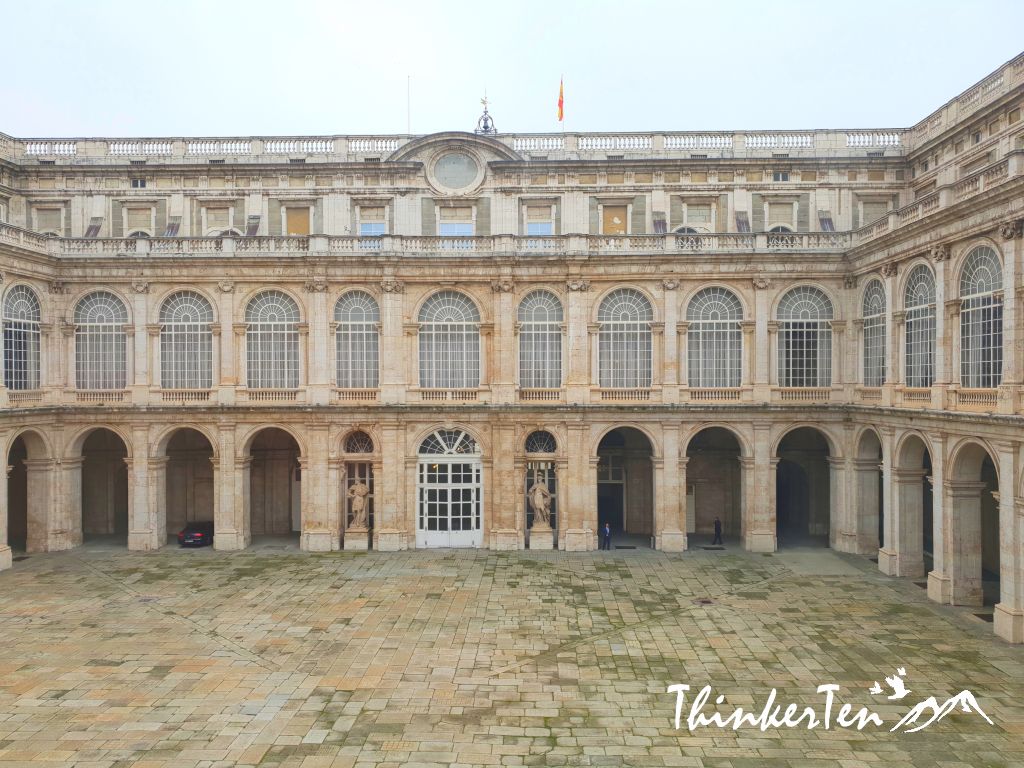 Don’t forget to walk through the back garden that house plants and fountains. The garden was created in 1930 and 44 statues of Spanish monarchs line the square. 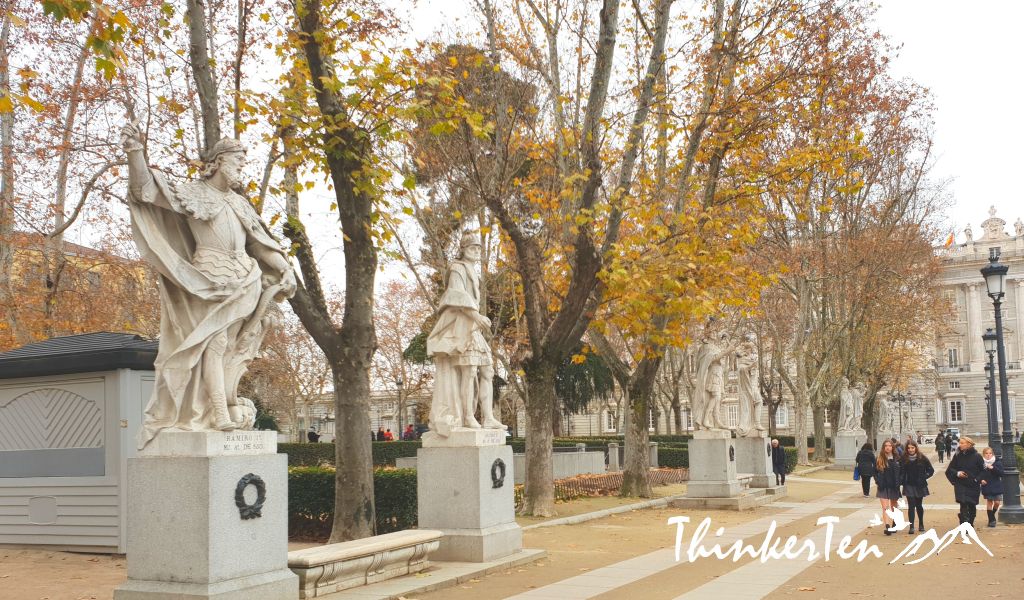 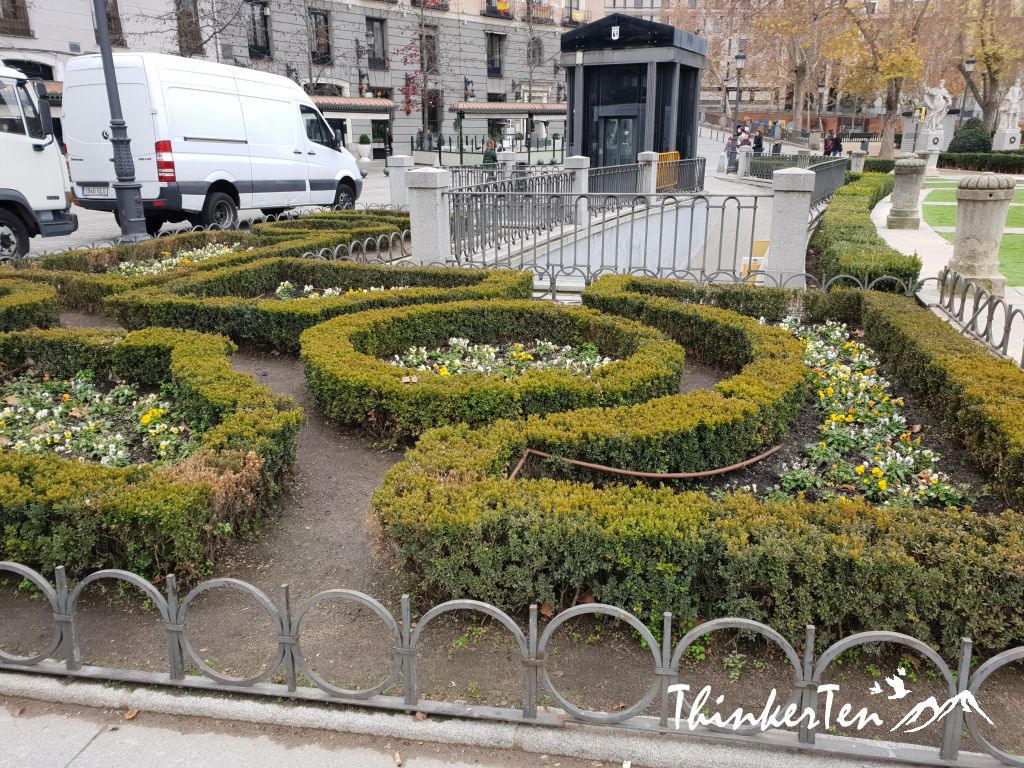 Statue of Philip IV, who ruled Spain in the XVII century sit in a large pedestal is located at Plaza de Oriente, behind the Royal Palace and the garden.  The fountain is decorated with statues of lions and some mystical figures.  Don’t forget to visit here. 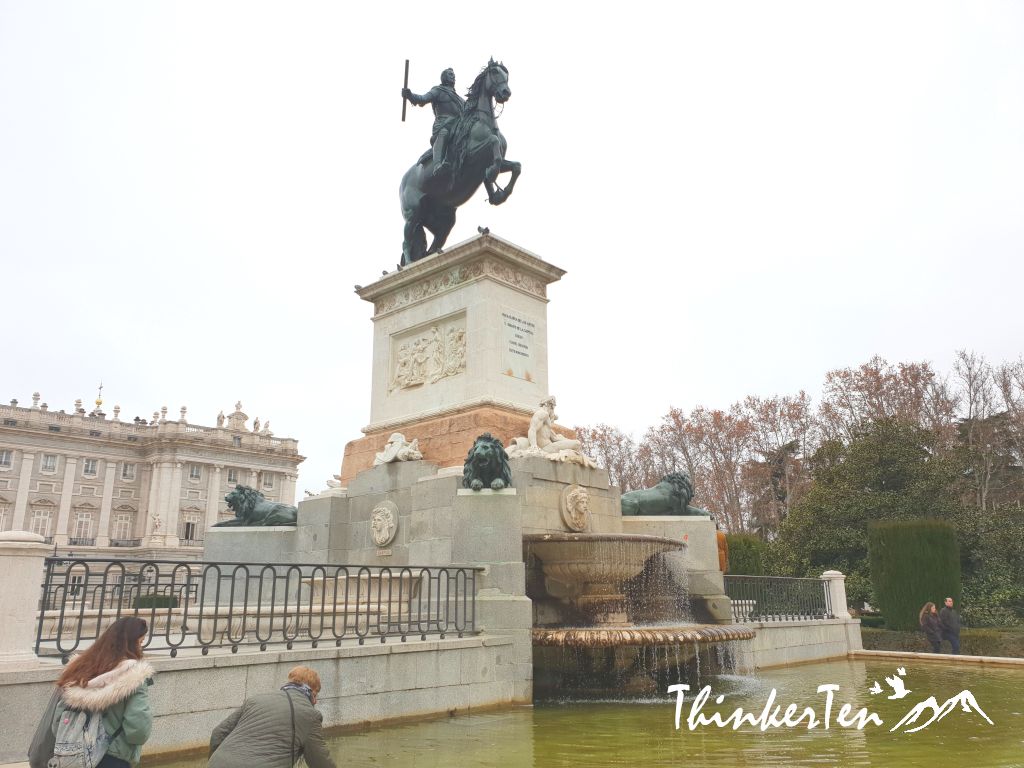 The line is always long so be prepared.  You can click from the above “ticketing” link to enjoy the discount and fast track access to the Royal Palace of Madrid 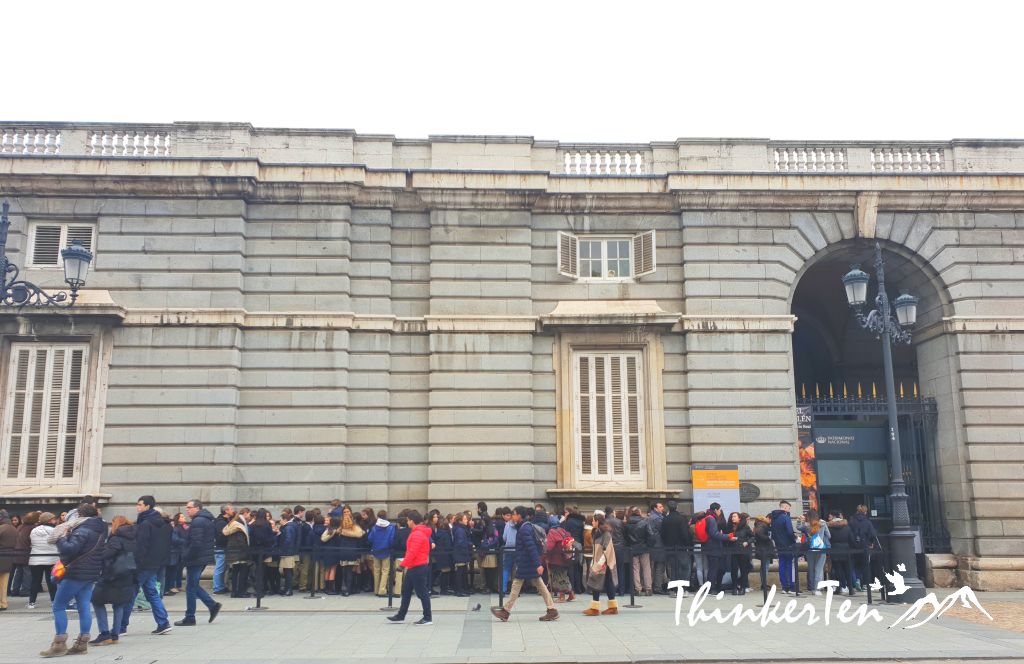 Have you been to any palaces and where is that?  Please share what are the fascinating thing you see from there? 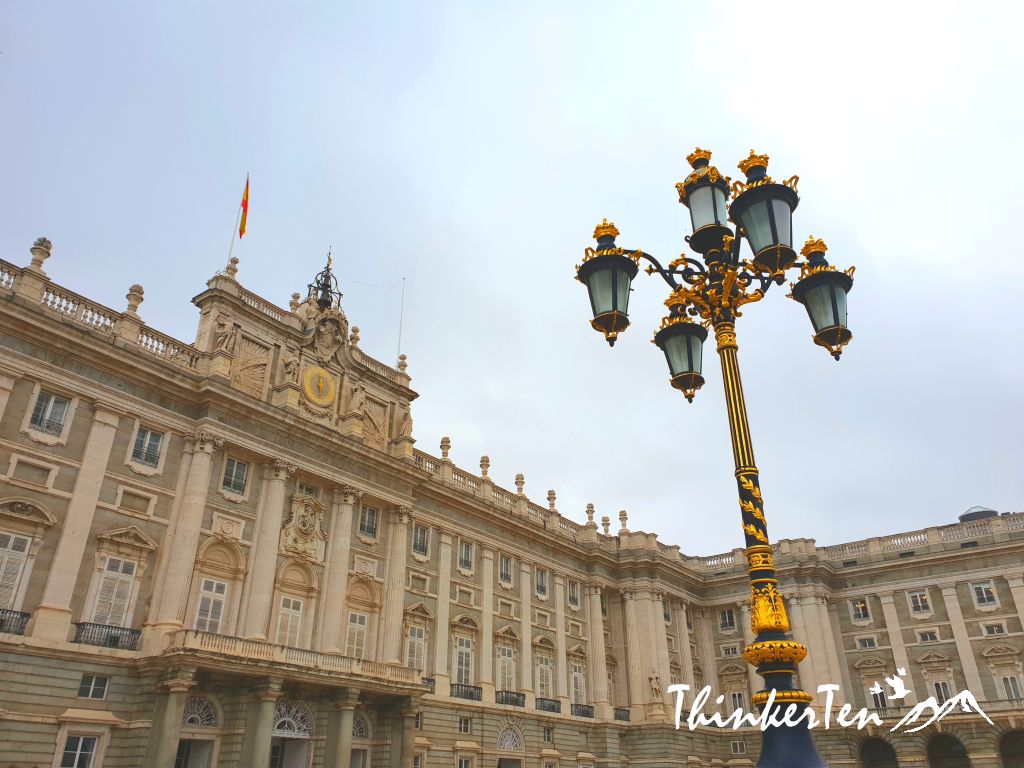 Japan : Lets “Kuidaore”食い倒れ/Eat till you fall over in Dotonbori Street Osaka! Check out the top food to try!

This is a breathtakingly gorgeous post for sure and I have Spain on my list for when I am able to travel abroad. I have never left the continental USA and Spain and Europe are on my list for sure!

The USA is so big and plenty of Spanish influences. I was in Balboa Park in San Diego and it was my first encounter with Spanish culture. Madrid is a fun city to explore.

As always, your pictures are absolutely stunning. I enjoy learning about Spanish history and I feel like the Royal Palace is just brimming with it! I always wonder what it must be like to be royalty and live in these incredible palaces and castles.

Same here, that’s why visiting the Royal Palace has given me a chance to peek at the Royal lifestyle. 🙂

Your photographs are absolutely beautiful. They make me want to drop everything and board a plane to Spain. Someday I would love to visit Spain and these beautiful places you have in this lovely post!

Great details and pictures about the place. Only problem I see is the ticket line in front of the palace; it looks huge and I do not like the wait online. Just for that reason, I might pass but thank you for sharing; that looks like an amazing place.

Go early but still, the line will be there too. LOL. The staff who works in the museum aren’t that friendly too, look like an FBI, stern face. Beware of them, some of the rooms aren’t allowed for photography and some tourists did not realize and shoot the picture and was being told off. The problem is some tourists can’t understand Spanish and the staff only speak Spanish.

Your photos are so stunning! The Royal palace of Madrid would be a wonderful place to visit. thank you for sharing this must visit spot in Madrid.

Thanks for your comment. The Royal Palace of Madrid is still in use for the royal family but they don’t live there anymore. They prefer to stay far away from the crowd. The palace now is used for state ceremony or meeting guests. So it is really great to be able to go in and check out where the King and Queen of Spain sit in the long tables when meeting their guests from around the globe. What kind of cutlery they used for holding parties. The treasures inside the palace are countless!

This palace looks filled with history and monarchs statues confirm the history of Spain Royal Palace. I love places that are history rich and love to visit them.

The Royal Palace of Madrid was built for more than 200 years ago, plenty of treasure inside the palace and the good thing is it is open to the Public.

WOW! So beautiful! I’ve always wanted to visit Spain and now if I do, this is definitely going on my list of places to visit! I just love the way this palace looks!

Spain has so much to offer and not just the Palacio Real, the Royal Palace of Madrid. It also has the bullfight ring and the Madrid football Santiago Bernabéu Stadium! These are some of the important sites one can’t miss out while in Madrid.

The splendid chandeliers and the gorgeous paintings in the Royal a palace of Madrid could be my sole reason to visit Spain.