The best way to understand a culture or a country is to visit the museum and here we are in the Cairo Museum on the first day of our arrival in Egypt. I think it is a good start of our Egypt tour as it helps us to have a deeper understanding of the authentic culture and history of ancient Egyptians.

The museum is the world’s largest collection of ancient Egyptian artifacts, over 120,000 treasures on displays. The collection spans over 5000 years of Egyptian history and I think if you can spend hours exploring. Inside the museum, there are separate admissions and no photos for some galleries such as Mummy rooms and King Tut. 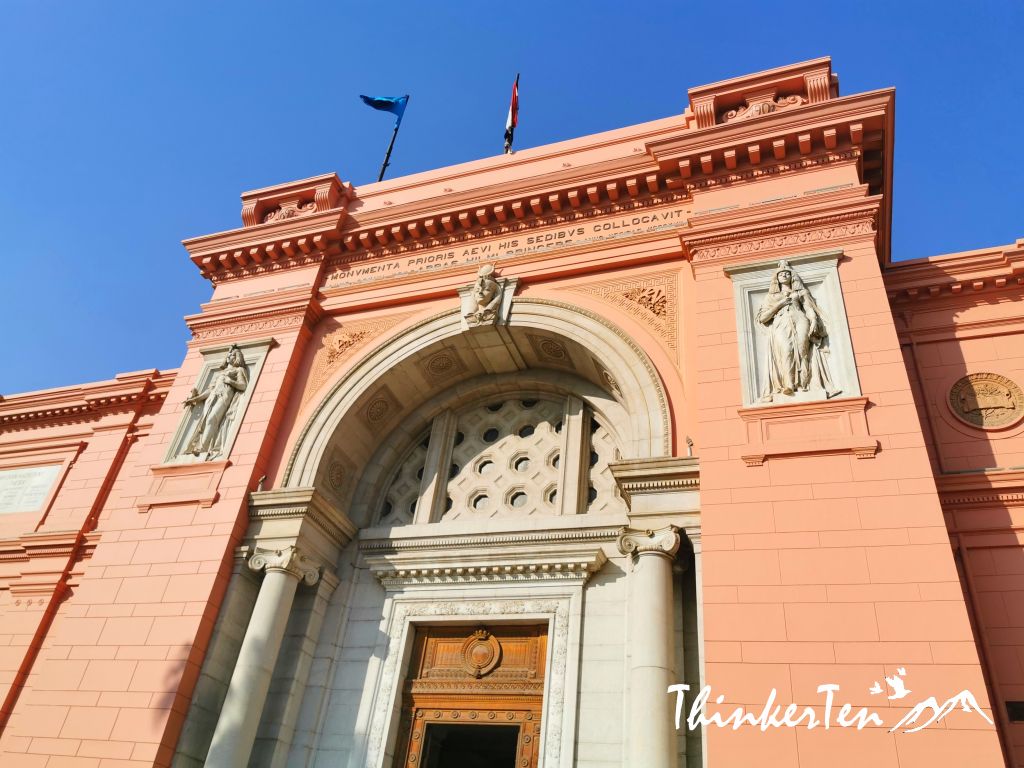 The layout of the Cairo museum was designed by the French architect Marcel Dourgnon so you can see the architectural style has western elements once you stepped inside. The location of the museum is in Tahrir Square but our guide told us that it will be moved to a new home very soon. The new museum will be called the Grand Egyptian Museum (GEM) and located outside of central Cairo near the Giza Pyramid. 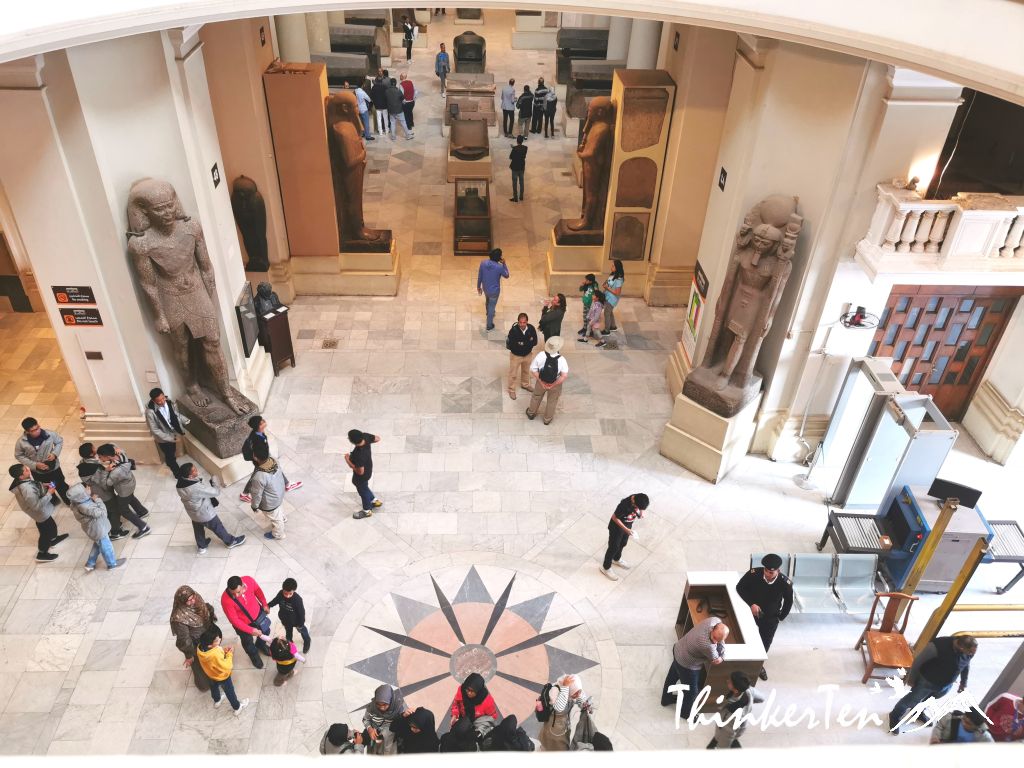 Ramses II love to built giant statues of himself, as you travel in Egypt you can see many of his statues in the temple ruins in giant size. He reigned for more than 60 years and also best known for his military leadership.  He ruled for both upper and lower Egypt as you can tell from the crown that he was wearing.  It is shown as double crowns with a cone shape in the white and red crown at the bottom. 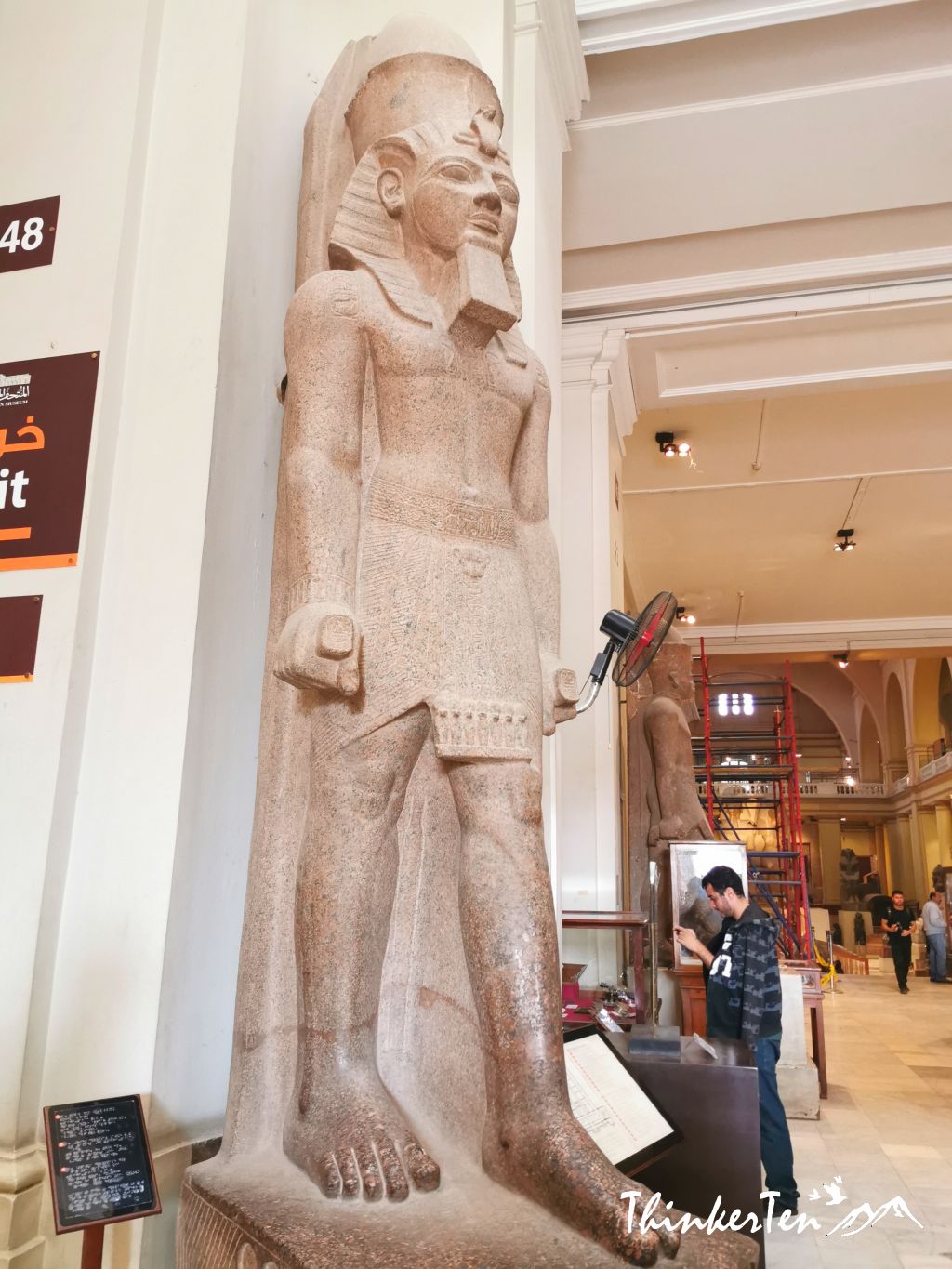 This ivory figurine of Khufu is so tiny and you won’t believe the cute size. Khufu was the Pharoah who built the great pyramid of Giza and he has the biggest pyramid among the three pyramids in Giza.  I still don’t understand why his statue is so small and yet his tomb is so huge? 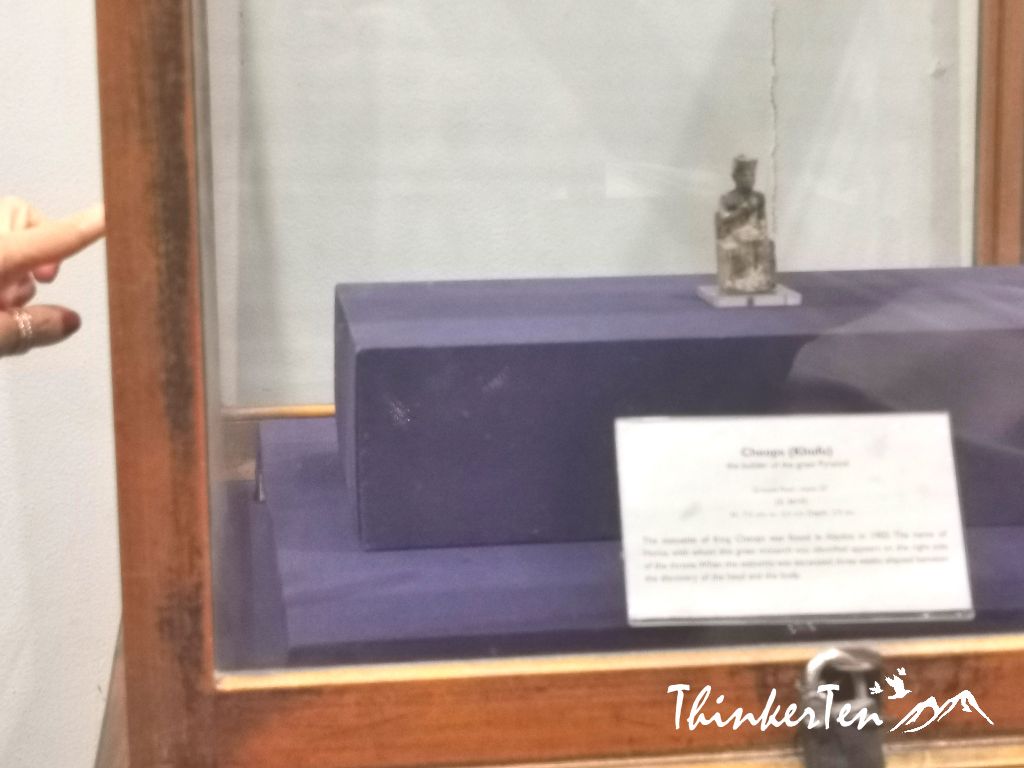 Khafre was the son of Khufu, king of the 4th Dynasty during the old Kingdom. The falcon god, Horus is sitting on the back of Khafre’s throne with his wings protectively around the king’s neck. This pose illustrates Khafre’s close relationship with his fellow god.

His royal line headdress similar to the one worn by the Sphinx. The beard that he is wearing is a fake beard, just like Hatshepsut who also wore a fake beard for her important procession.

The second-largest pyramid in Giza was dedicated to Khafre. 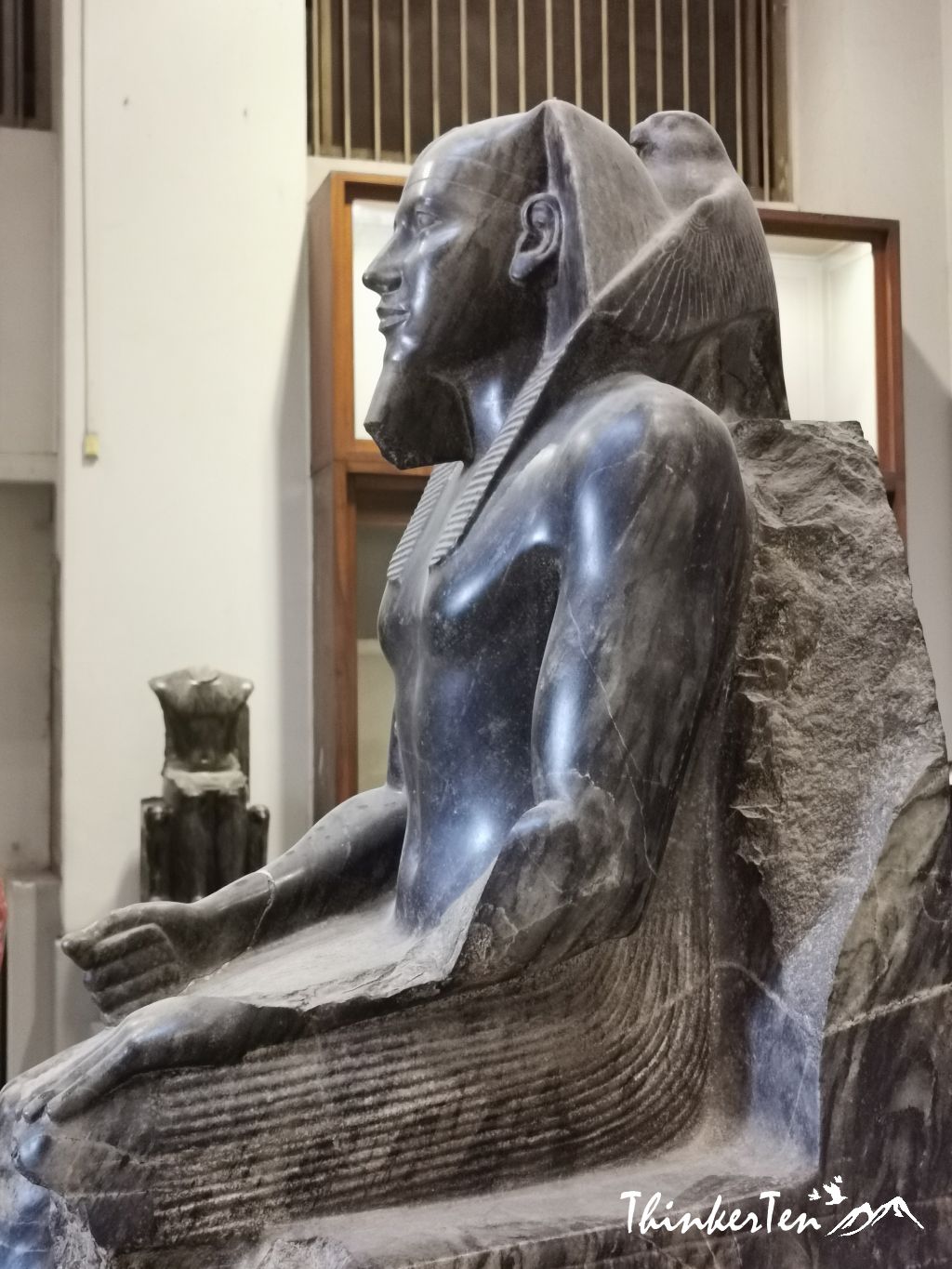 4. King Menkaure with the goddesses Bat and Hathor

Pharaoh Menkaure is the son of Khafre, he was well remembered for his kindness and religiosity, which has a different personality from his father and grandfather Khufu.  The smallest pyramid in Giza was dedicated to Menkaure.

Hathor is the Egyptian goddess with cow horns and a sun dish at the top. Hathor is also the wife of Horus, the falcon god. 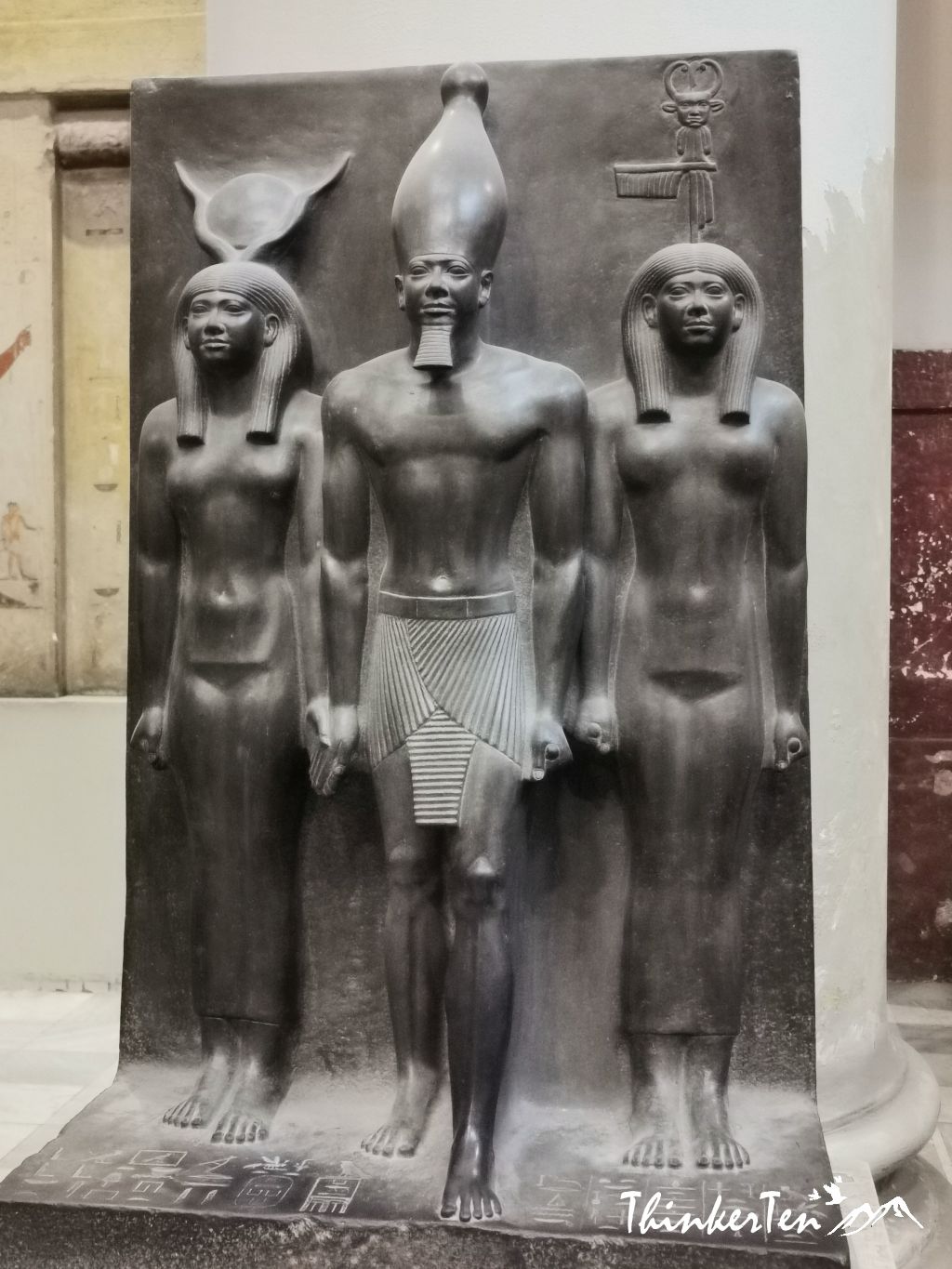 5. Prince Rahotep and his wife Nofret

This is beautifully preserved life-size painted limestone funerary sculptures of the couple. The key thing to note is the eyes.

The most outstanding feature of the statues is that they both retain their lifelike inlaid eyes of crystal which stunned the Egyptian workmen who first opened the tomb and saw them staring out. In the torchlight of the dark tomb they looked alive. 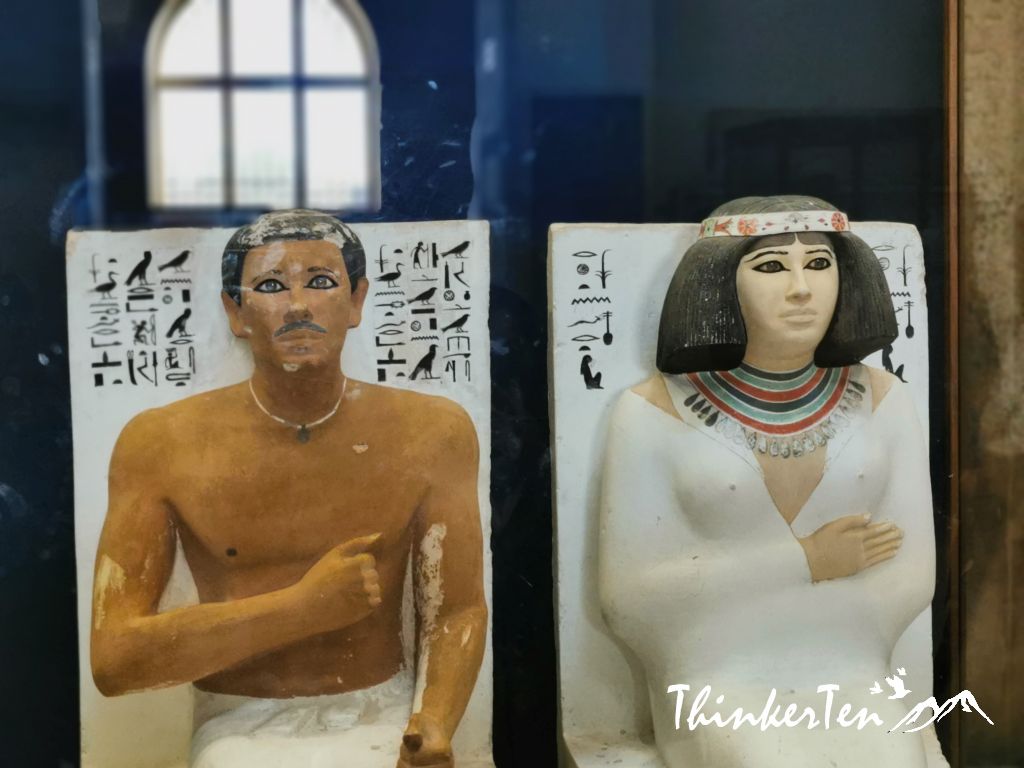 You don’t get to see wooden statue often but Kaaper statue is well known for his famous wooden statue. The statue is round with a peaceful face that is almost lifelike thanks to the eyes, I find it quite scary. It was made using rock crystal. The eyes seem to stare at all angles when you look at it.

Mosty Egyptian statue depicted a good figure of the King but this wooden statue has a big belly and round body.  He is not the King but a monk or an official. 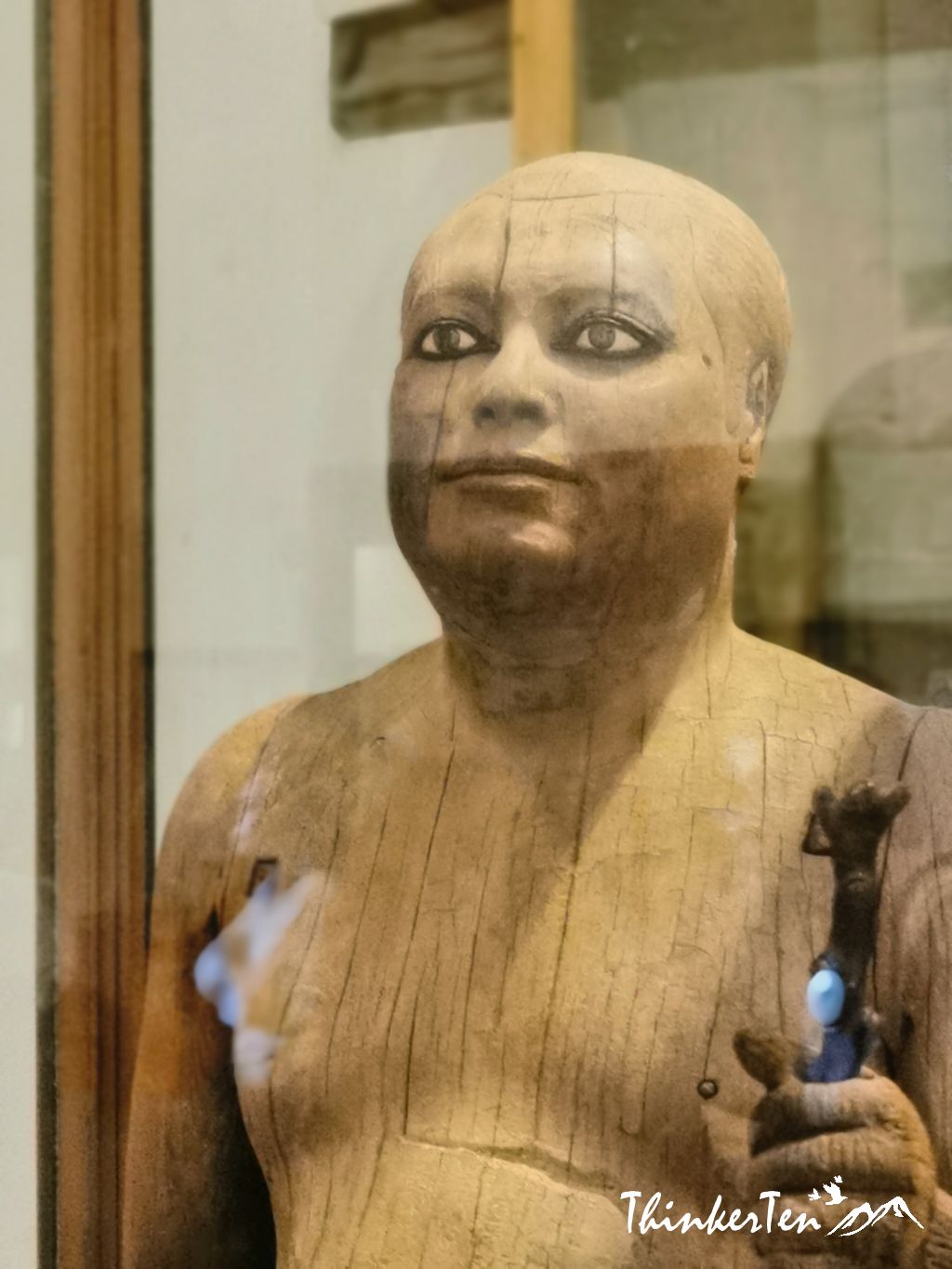 Well, you don’t get to see a lot of female Pharoah but Hatshepsut is one of them.  She has a huge temple crafted from the limestones dedicated to her in Luxor.  You will visit Hatshepsut temple when you are in the Valley of the King & Queen in Luxor. 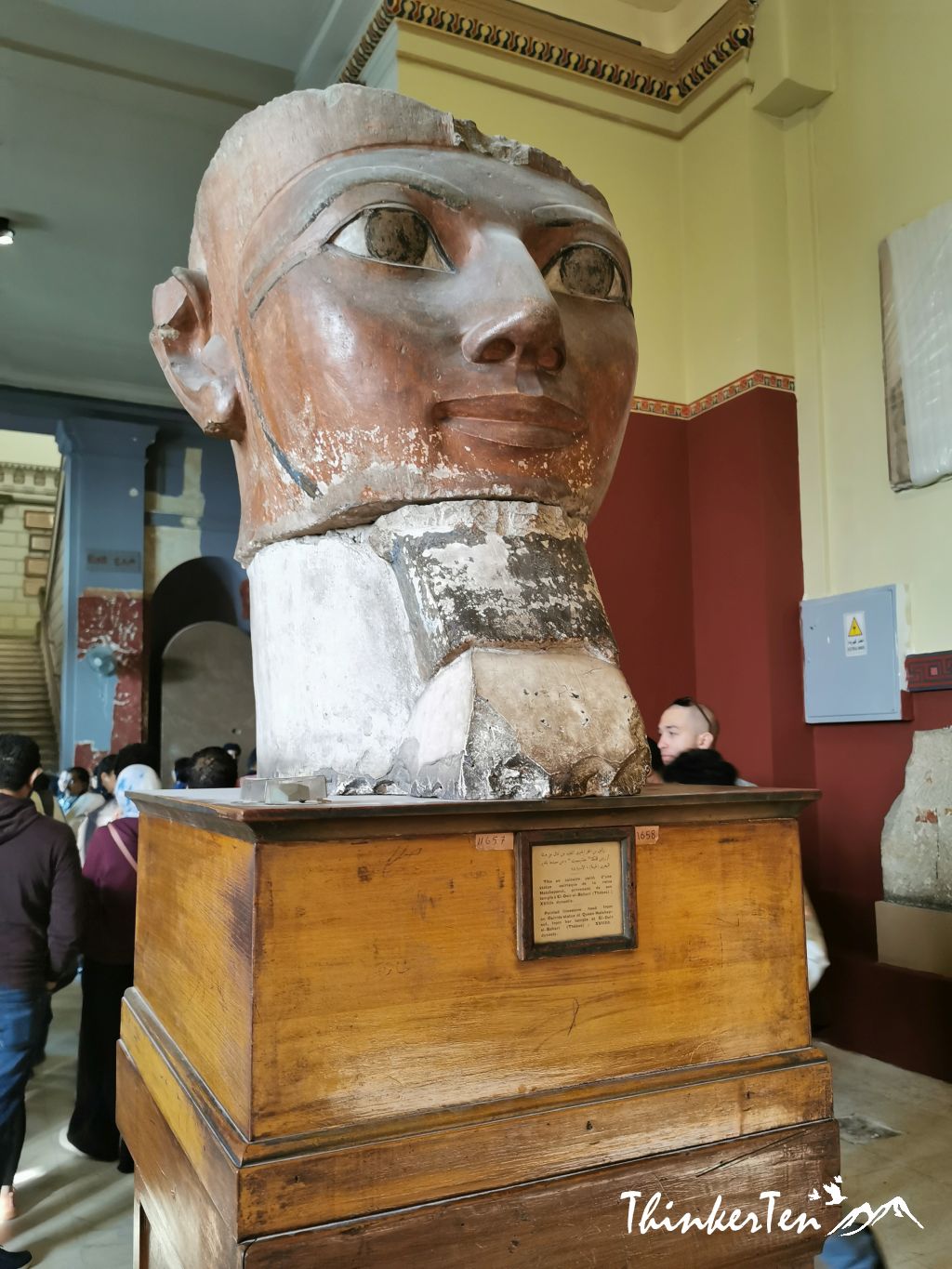 Over 2000 god and goddess in the Egyptian pantheon but some of the famous one is Isis, Osiris, Horus, Amun, Ra, Hathor, Sebek, Anubis, and Ptah. 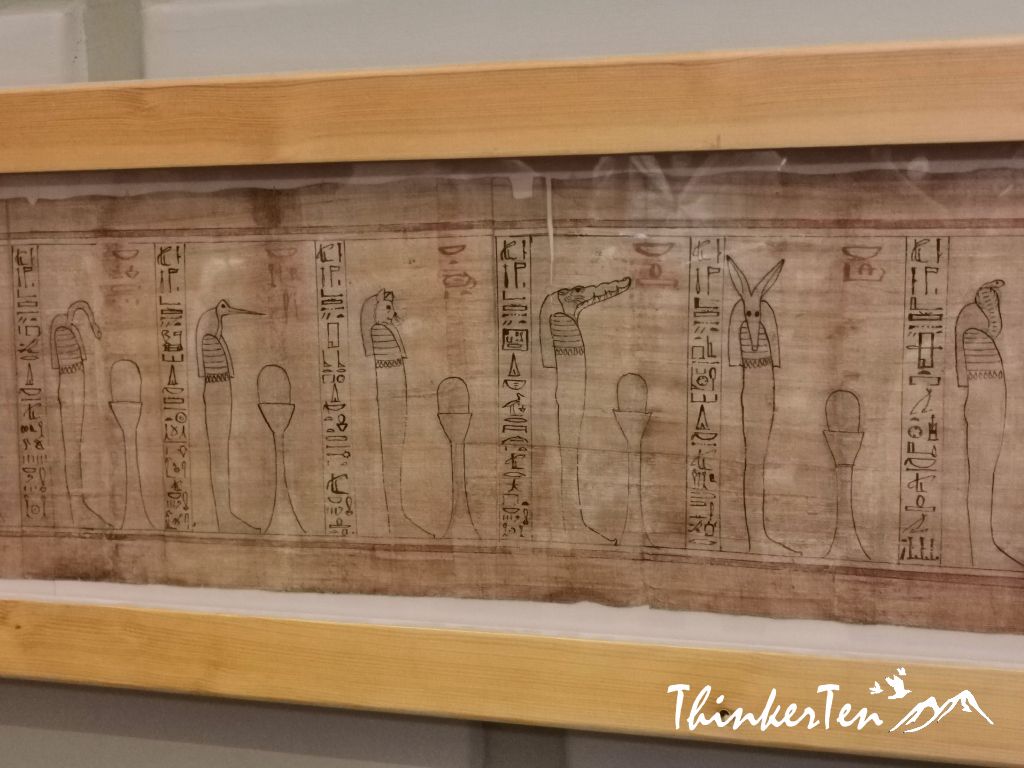 Hieroglyphs are written in rows or columns and can be read from left to right or from right to left. A human or animal figures always face towards the beginning of the line.  Trying reading these Hieroglyphs,  you may be able to guess the story. 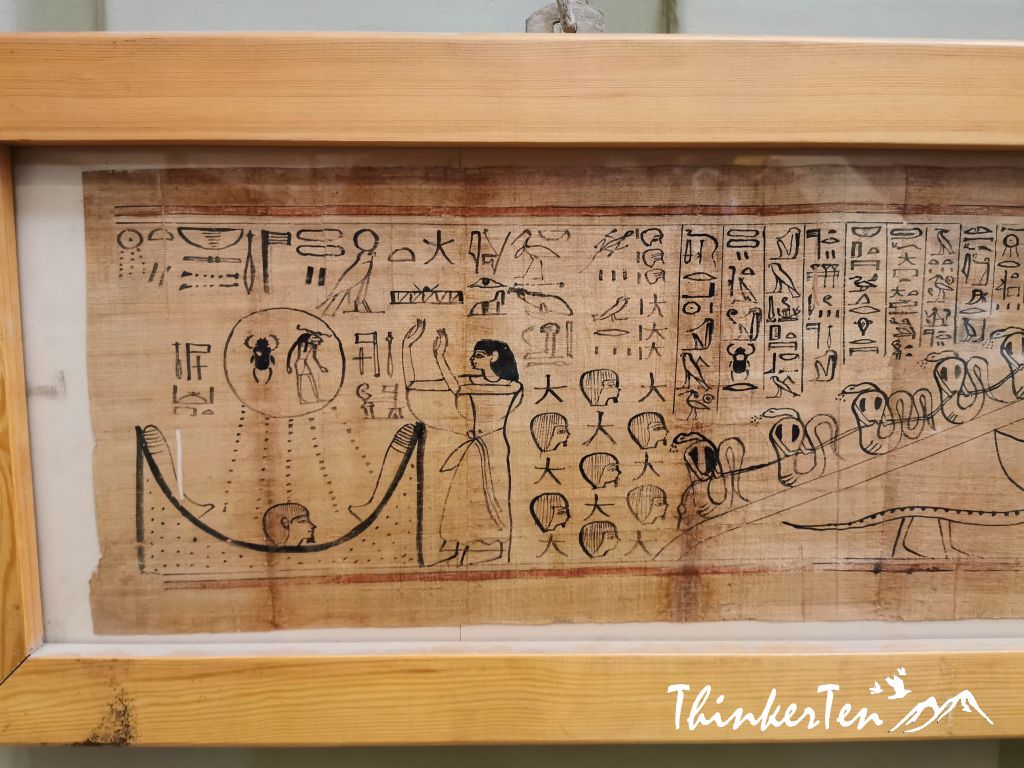 You will see the golden shrines here that were used t contain the internal organs of individuals removed during the process of mummification. The most common form was four jars held within a chest, but this canopic equipment could comprise miniature coffins and masks. 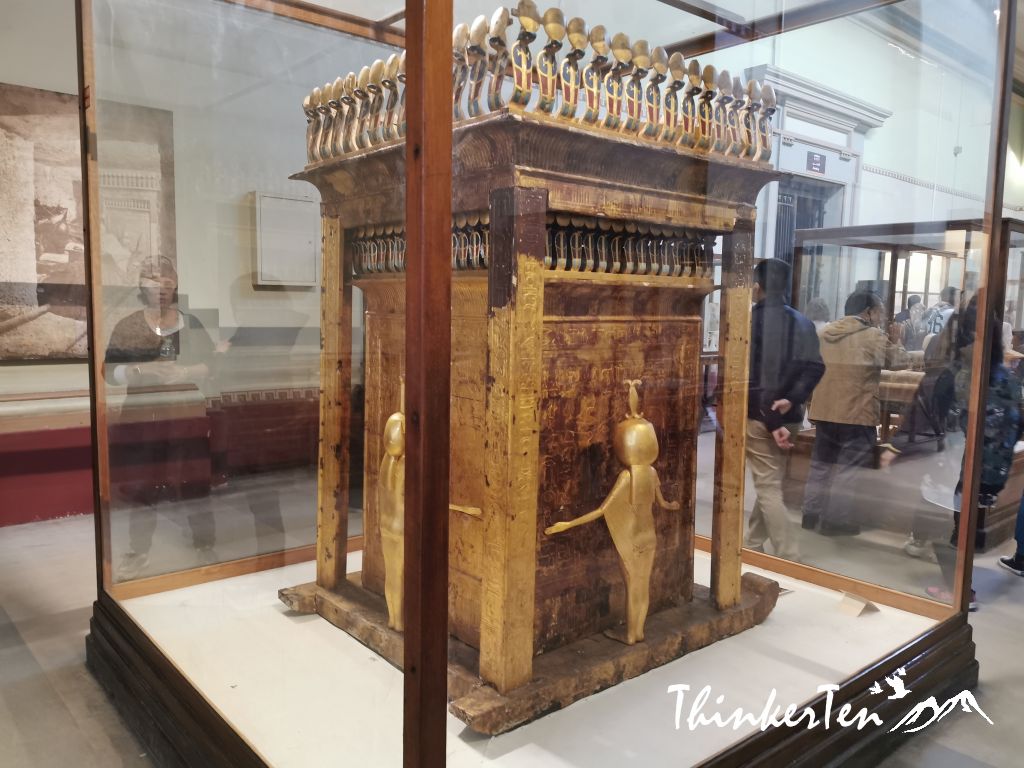 11. Jars for internal organs before mummification

These are chests found inside the canopic shrines made from Alabaster stones.  The chests were used to keep internal organs before the mummification process. Generally, the chests made from Alabaster has been used magically to symbolize transparency and purity. You can see these crystals signifies their excellence through their color, it means the whiter the stone the better. 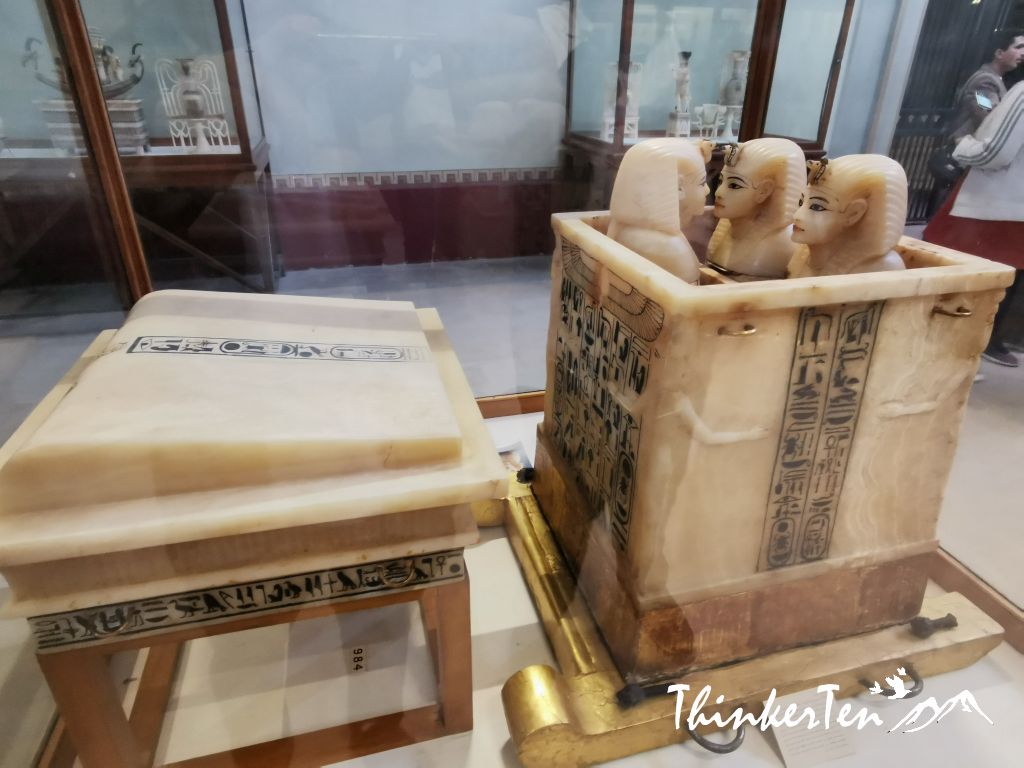 This statue of Anubis is made of wood, plaster, lacquer, and gold leaf. It was discovered by Howard Carter in the Valley of the Kings in 1922 together with the tombs of Tutankhamun, King Tut.

Anubis is the god of death and the afterlife, was closely associated with mummification and burial rites. He has the head of a jackal and man body.

13. The Golden Throne of Tutankhamun

The royal golden chair was used by King Tut, you can see it was beautifully carved.

This is one of the complete items as everything seems intact. You will see a pair of cobra wearing the double crown at the side, near the hand resting area which represents “king of Upper and Lower Egypt”. 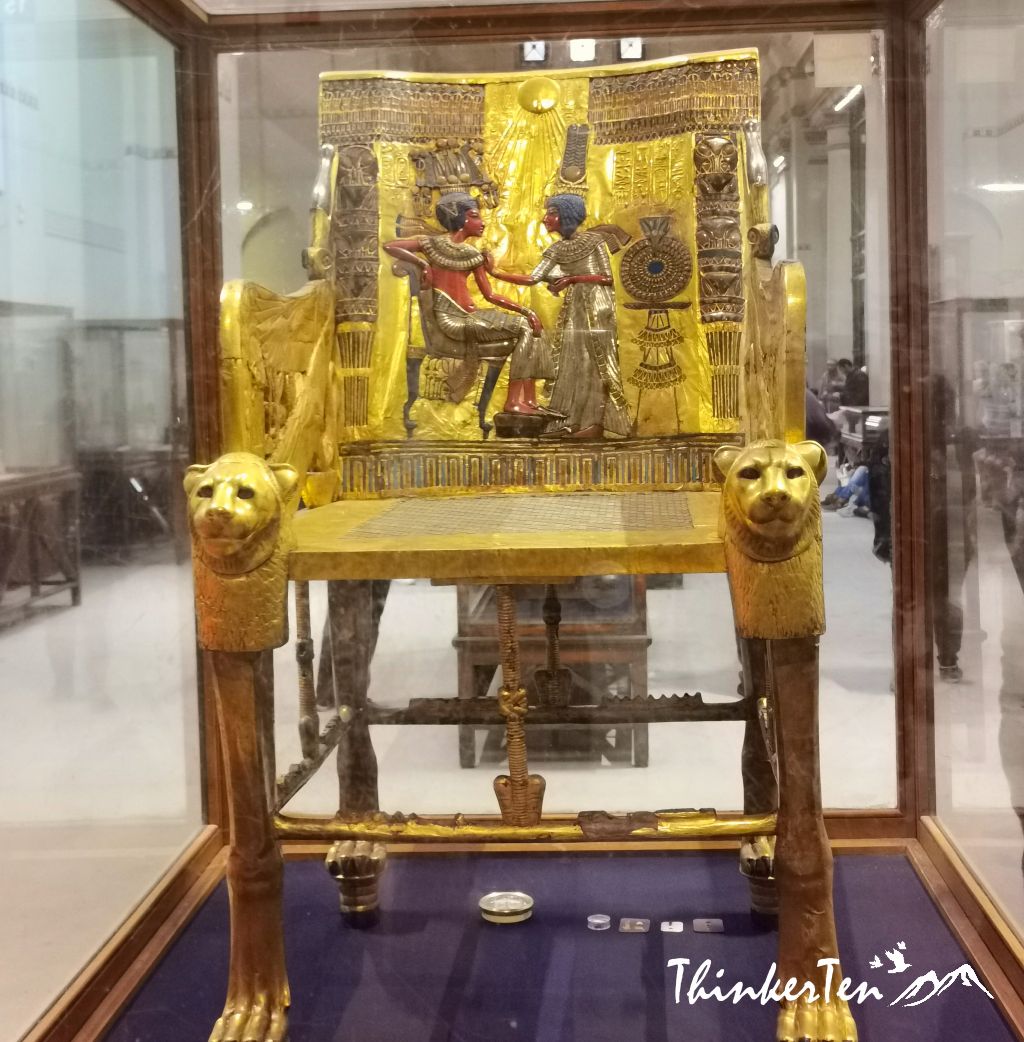 Yuya was not a Pharoah but was a powerful Egyptian courtier who married to Tuya, an Egyptian noblewoman associated with the royal family. Their daughter, Tiye later became the Great Royal Wife of Amenhotep III. Tiya was the mother of Akhenaten and grandmother of Tutankhamun.

Yuya and his wife Tuya were both honored by being buried in the Valley of the Kings together with the pharaohs. Yuya’s coffin is entirely covered in gold leaf. 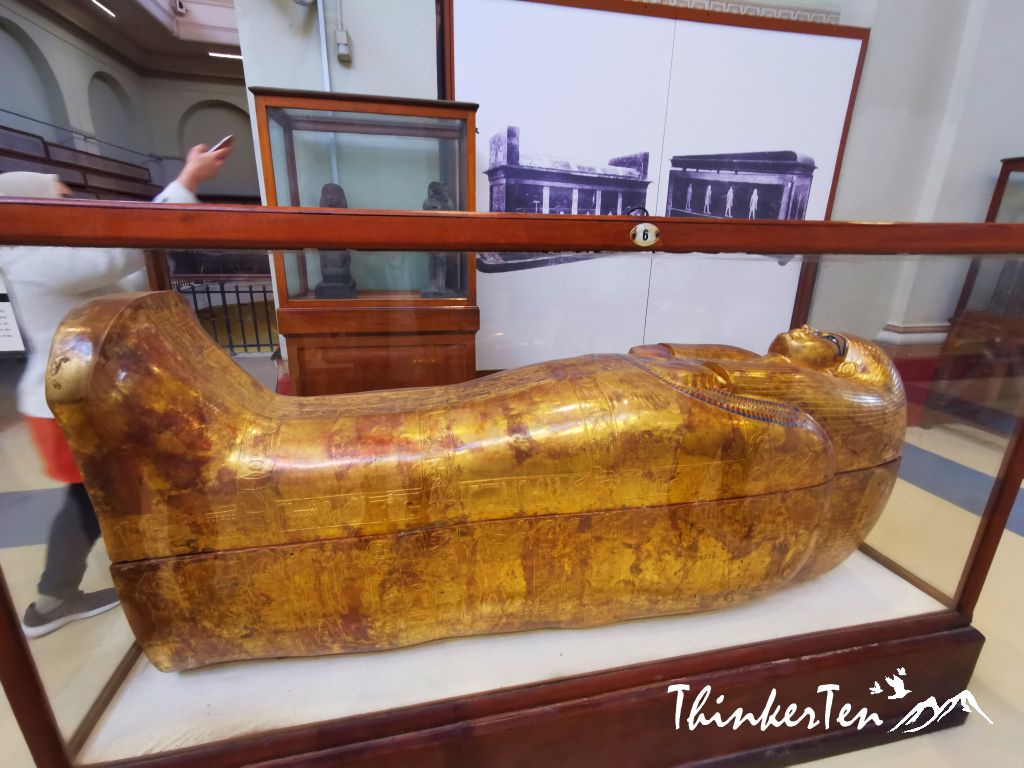 Both Yuya and his wife’s mummy were largely intact and were in an amazing state of preservation. The face was undistorted and provide an extraordinary insight into the actual appearance. 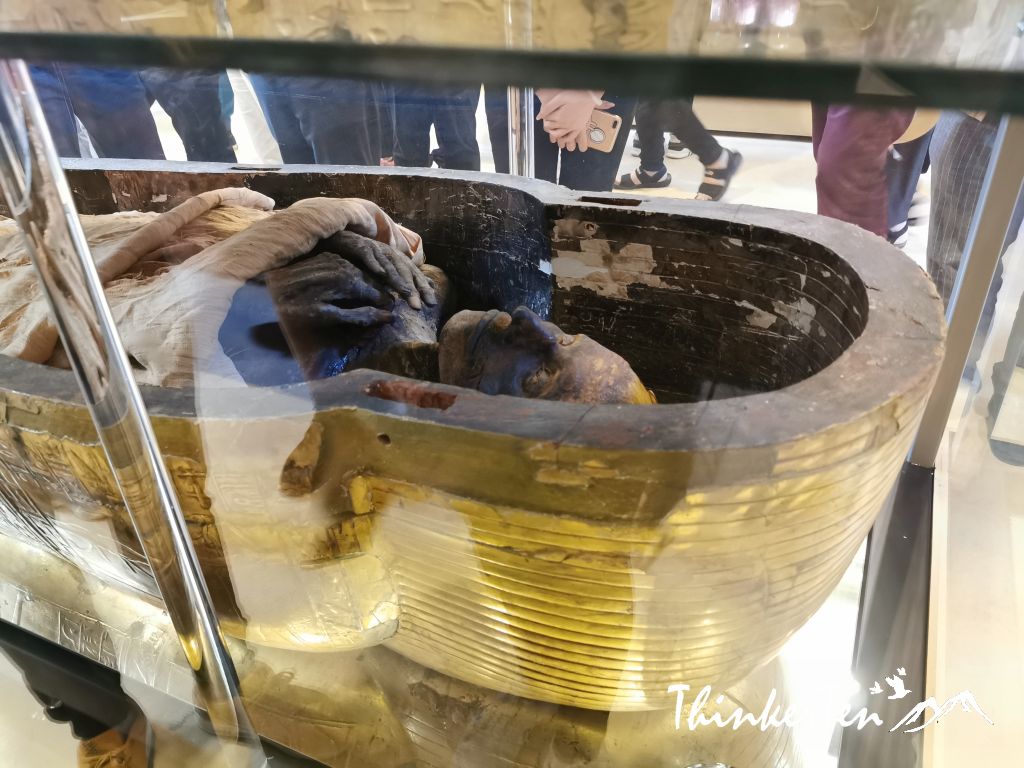 This may look shabby as it is composed of 79 pieces altogether. It was unearthed in the Temple of Amun-ra at Karnak.

Amun is the most important gods of ancient Egypt who represent the sun and his wife is Mut. Mut was the Egyptian sky goddess.

She was a God’s Wife of Amun during the 25th Dynasty of ancient Egypt. This is another great preserved piece made from Alabaster stone. 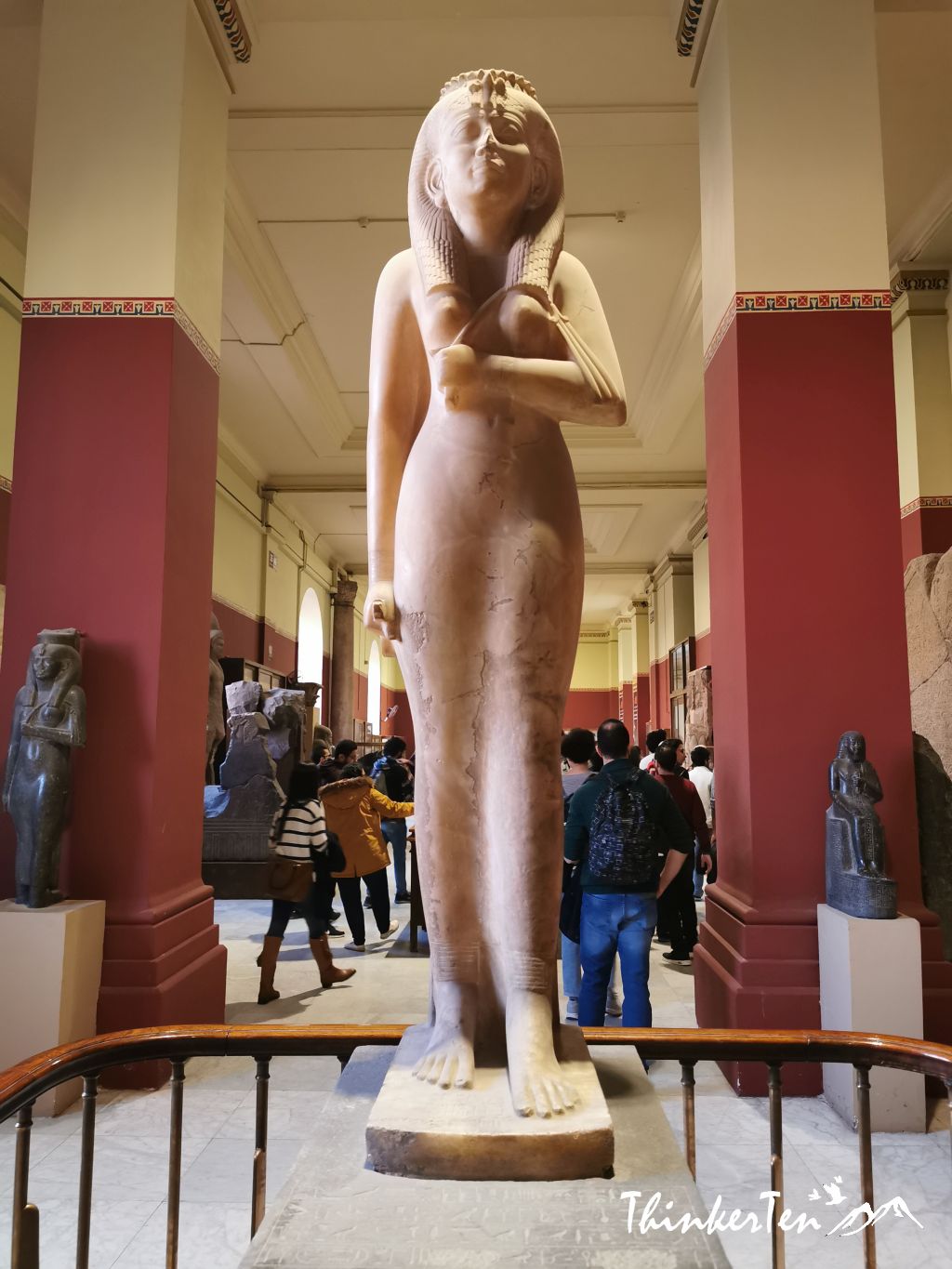 18. Rameses II childhood and the Horus, the falcon god in granite statue

Horus, the god of falcon looks bigger than the little Rameses II.

What are your favorite treasures among the 18 treasures here?  My favorite would have to be the little Khufu statue.  I still thinking why Khufu statue is so tiny and yet his pyramid is so huge? 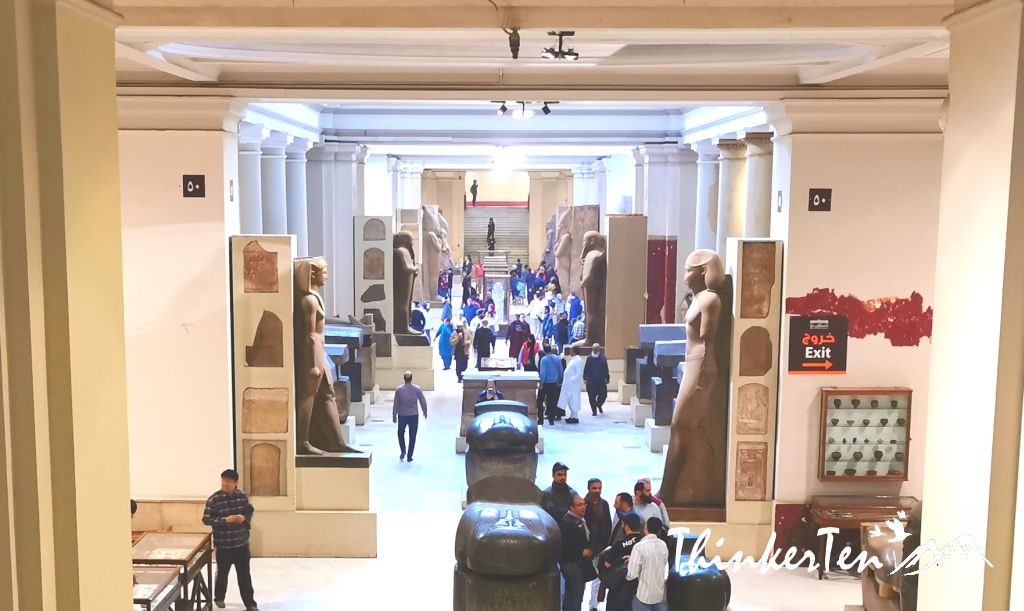 Top 13 things you need to know about Egypt

Your posts always make me want to travel. I can’t wait until we are able to again.

Wow, this is cool. My fav is the Golden Throne, so beautifully preserved. I didn’t notice the cobras until you poitned them out!

Wow! I have never been to Egypt but what an incredible array of treasures from their rich past, all under one roof!

What an incredible place to visit. So much amazing history. I would love to check out this museum and see the artifacts.

Egypt was on my list for this summer. Unfortunately, it looks like it will have to wait. Keep the Egypt posts coming for when the time finally comes for me!

It looks beautiful and really interesting. Egypt has such a unique history and I’d love to visit one day. Mich x

I’m a nerd and I love mummies, museums and the musty smell of old artifacts. I’ve seen a lot of this stuff on tour in Germany before the new museum was built. I am also happy Egypt was able to retrieve so many of these priceless artifacts.

Museums are definitely a treasure trove for a country and civilizations history and culture, although seeing the embalmed egyptian corpses will always be cryptic.
XO, MJ\
https://lush-fab-glam.com

Museums are definitely a treasure trove of a country and civilizations rich history and culture.
XO, MJ
https://lush-fab-glam.com

The Cairo Museum looks amazing. It’s definitely somewhere I’d like to visit once lockdown is over 🙂