Top 13 things you need to know about Egypt

Once we touched down in Cairo, our tour bus came to pick us up and the local guide gifted us a phone card and a flower.  Cairo is the first city we see in Egypt. We heard so many great stories about Egypt and now we were about to explore and see it ourselves. There are a number of things to know before you arrive in Egypt and let’s see. 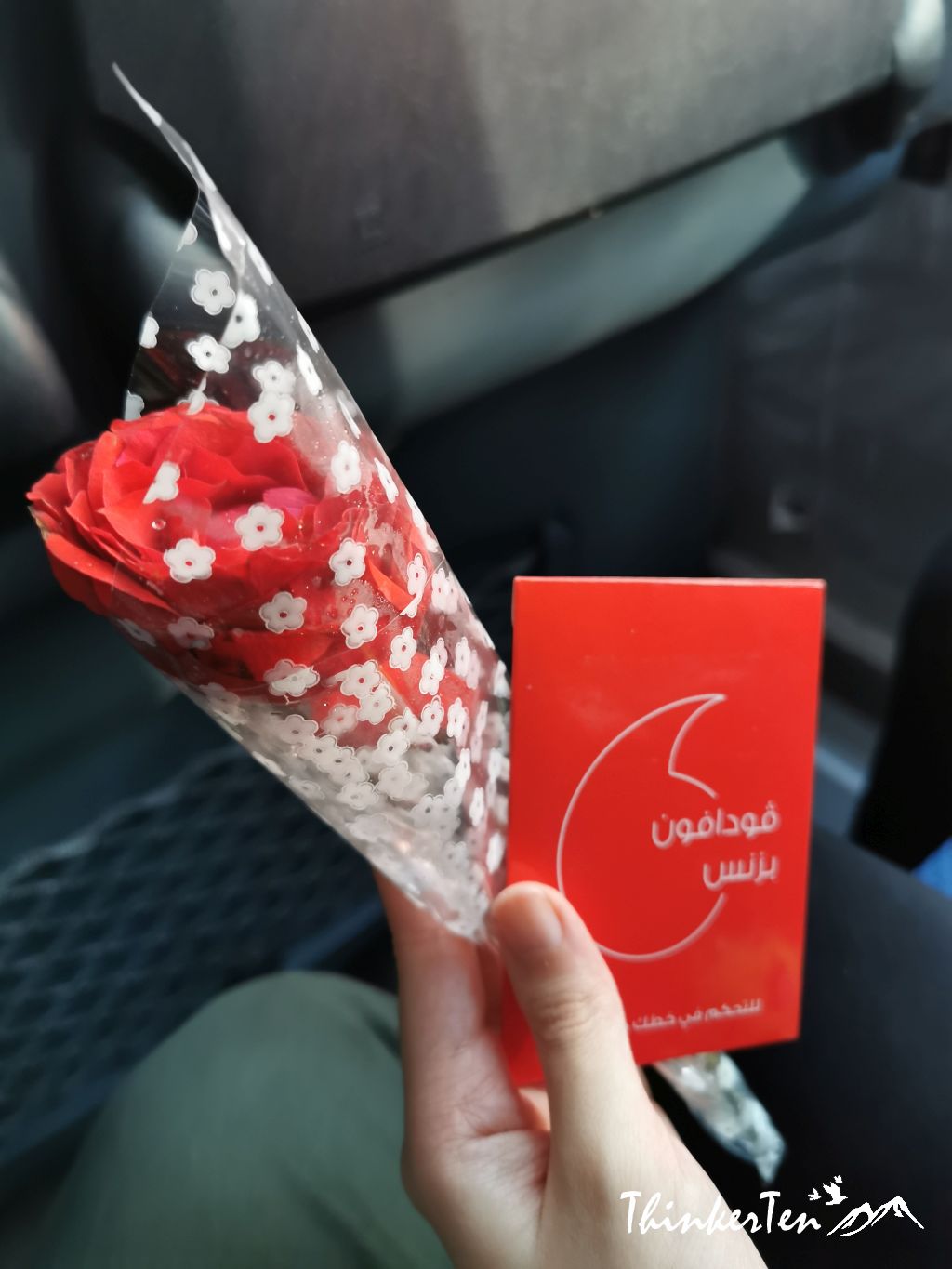 The Egyptian population is about 98 million people and the official language is Arabic. Over 90% of the people here are Muslim and the rest are Coptic Christians. Hence you see a lot of mosques here. We passed by mosques almost every 5 minutes.

The Egyptians were people from the Eastern Hamitic backgrounds and this includes Bedouins and Berbers(North Africa). Small percentages are from Greek, Nubian, Armenian ethnicity. We met Bedouins in the desert near Hurghada Red Sea and also visited the Nubian Village in Aswan. Nubians are very colorful people.   The great Pharoah Ramesses II’s wife, Nefertari was believed to be a Nubian girl. 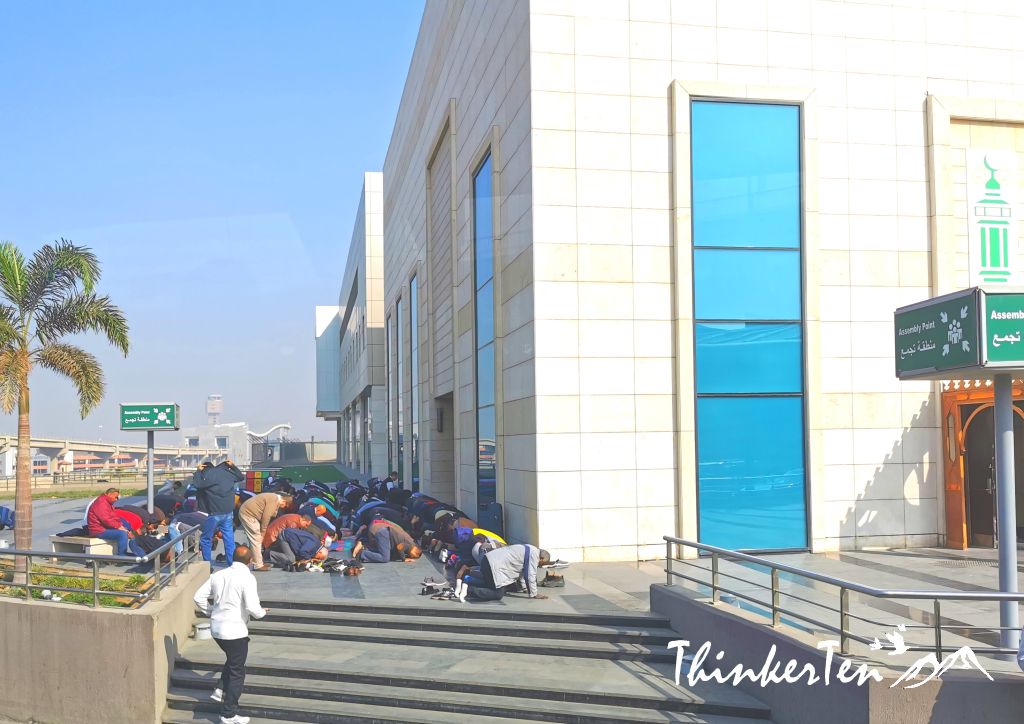 When you travel to Egypt, you will encounter quite a few obelisks. One of the famous ones is called the “unfinished obelisk” also the largest on earth located in Aswan. Ancient Egyptian built obelisks to celebrate the sun god Ra. You will see the obelisk’s shaft are embellished with hieroglyphs that characteristically include religious dedications, usually to the sun god, and commemorations of the rulers. Not many left from the ancient Egyptian period and some important ones you could see now usually at the entrance of the temple, such as Karnak Temple. 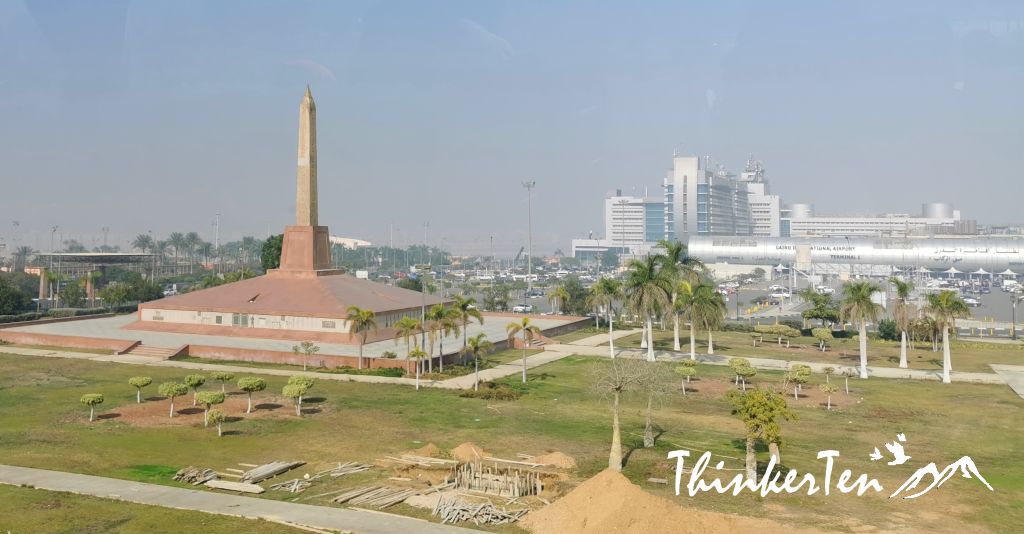 2. Cairo is the city of thousand Minarets

As of 2016, there are over 114,000 mosques in Egypt but you certainly need to visit some of the famous ones. Mosque of Muhammad Ali at Citadel of Saladin in Cairo would be one of the best ones that I recommend you to see. It is located at the summit of the citadel which also offers a whole panoramic view of the Cairo city. The mosque looks similar to the Blue Mosque in Istanbul as it is built by the Ottoman era. 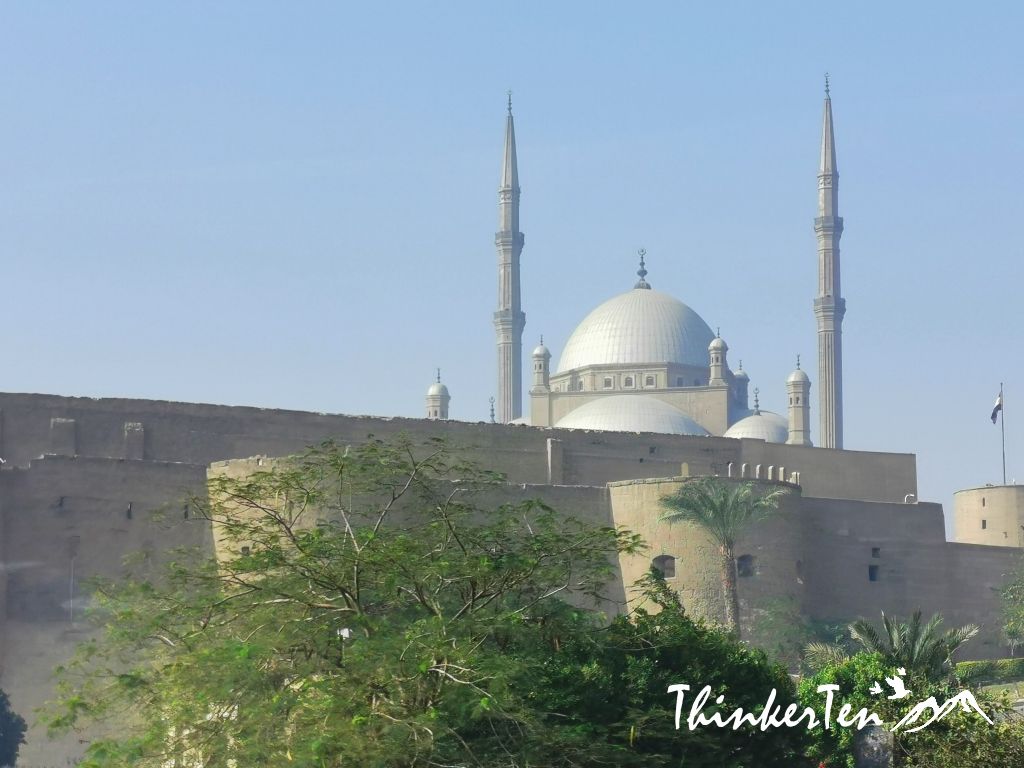 3. Get a local experience by taking a microbus

There are a number of public transportation to get around in the city of Cairo but one of them is microbus which is largely used by the locals. It is also one of the economical rides in town. The microbus seems to stop anywhere anytime they like and there are no numbers on top or indication on each of the microbus where it will go. The interesting part is potential riders would have to fling up the hand sign to tell their destination to the driver. Once the driver saw the signs matching the place he will go, he will slow down and let passengers join in the microbus. 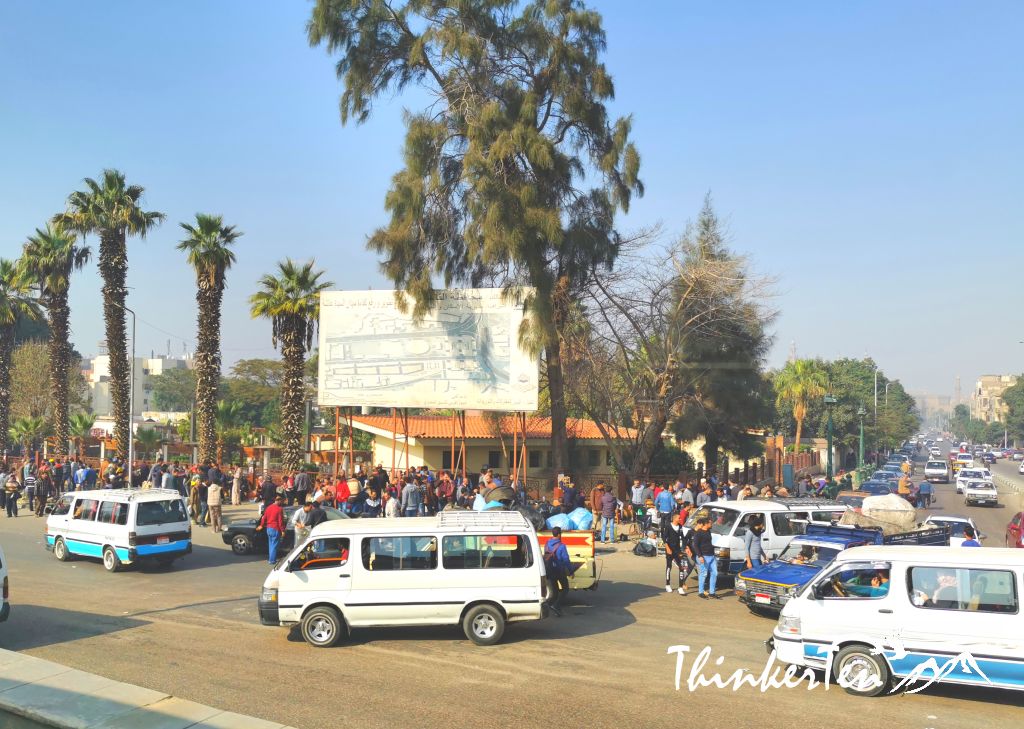 4. Can you rent a car and drive around in Egypt?

Don’t rent a car and drive in Egypt as the traffic is chaotic here. Many of the places, especially desert areas you can’t drive if you are a foreigner, only local or person with a permit can drive through those desert areas.

If you still prefer driving then try not to drive at night as there are many hazards in the form of pedestrians and carts.  Many roads are not well-paved; with holes and uneven surfaces.  On top of that you also have to drive along with the donkeys, horses, and camels on the roads.

Driving in rural areas, especially crossing the desert is best done during the day due to poor lighting and terrorist attacks.

One of the unpleasant scenes, when you reached Cairo, is the unfinished housing. Not just one or two, the whole long stretches weren’t completed and I asked why to the guide. He told me that once the building was completed at the top, the owner needs to pay the property tax. In addition to that, large extended families of three or four-generation live together in one house so when someone in the family gets married, a new floor will be added on the top. To be frank, it is not pretty and made the whole city ugly. 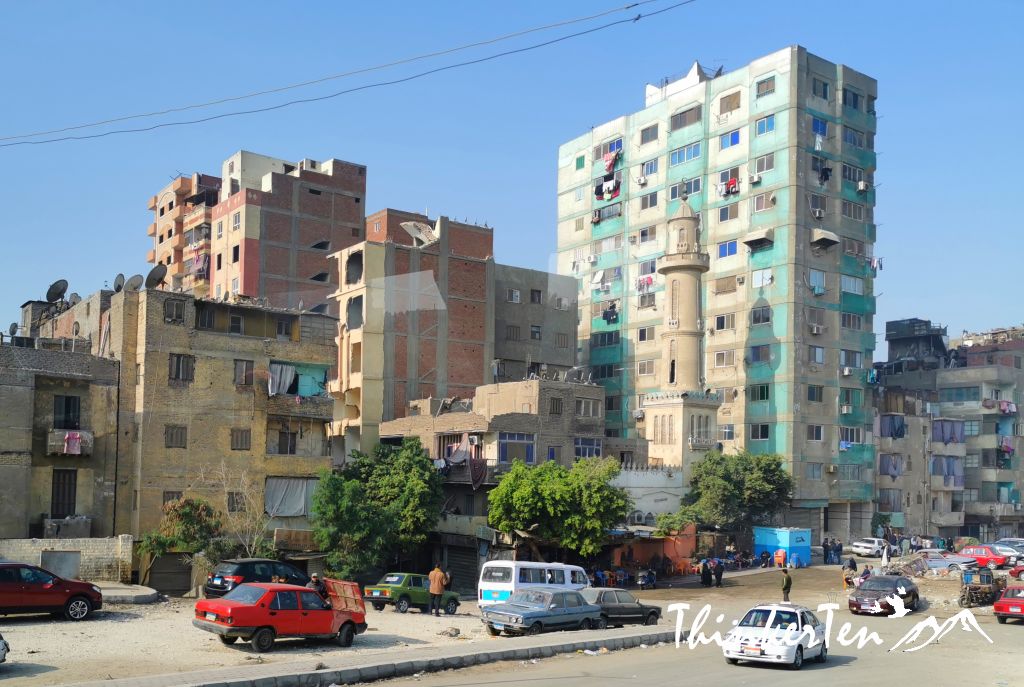 Floating restaurants seems like a way of dining out in Cairo, where customers can be provided not only with a meal but also an entertaining experience with views of the Nile River. We had our lunch in a floating restaurant called Nile Peking, served mainly Egyptian buffet. No Chinese food. 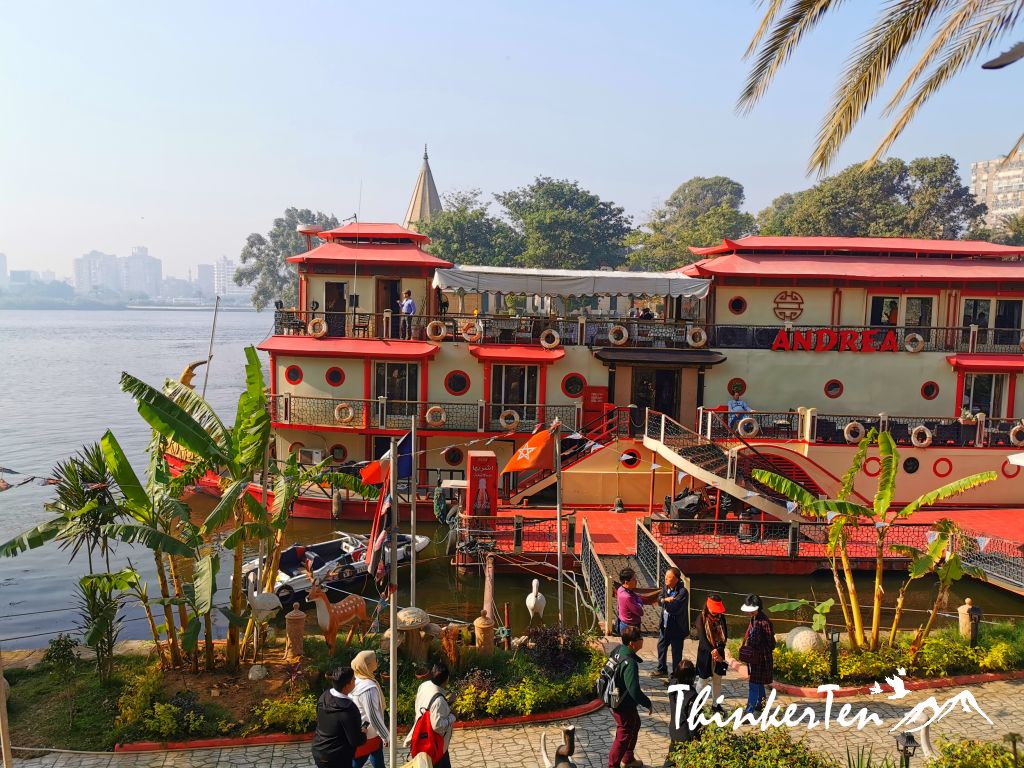 We eat rice daily but bread plays a very important roll in Egyptian culture.  Aish Baladi is served almost every meal, a traditional bread eaten daily in Egypt. It is made with whole wheat flour and we happened to watch a lady made Aish Baladi in front of us using the traditional method. It is interesting to learn that Aish Baladi has a pocket to stuff anything you like. 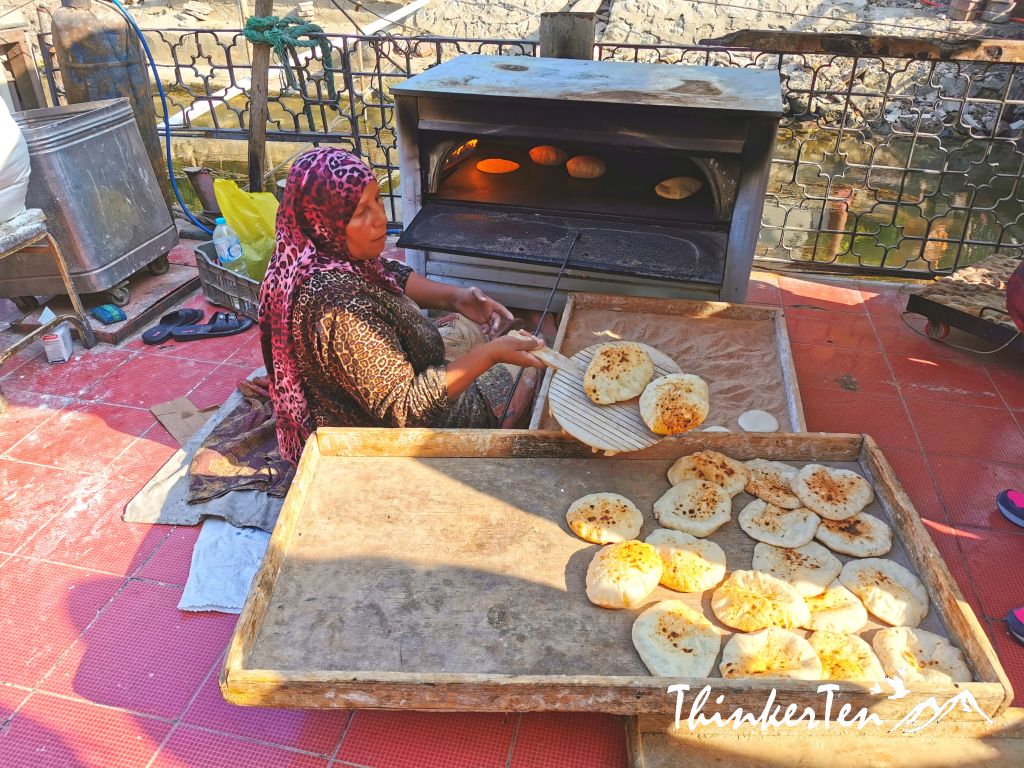 8. How often does a sandstorm strike in Egypt?

Sandstorm happened in Egypt and bringing traffic to a standstill, forcing the closure of highways as it reduces visibility. Once they sweep across, the temperature also drops as the winds increase, sometimes gusting up to 100 km per hour. Serious sandstorms can take down trees and cause damage to houses. Mild sandstorms happen yearly in Egypt hence you see the whole place, especially building and cars always look dusty and covered by layers of dust. 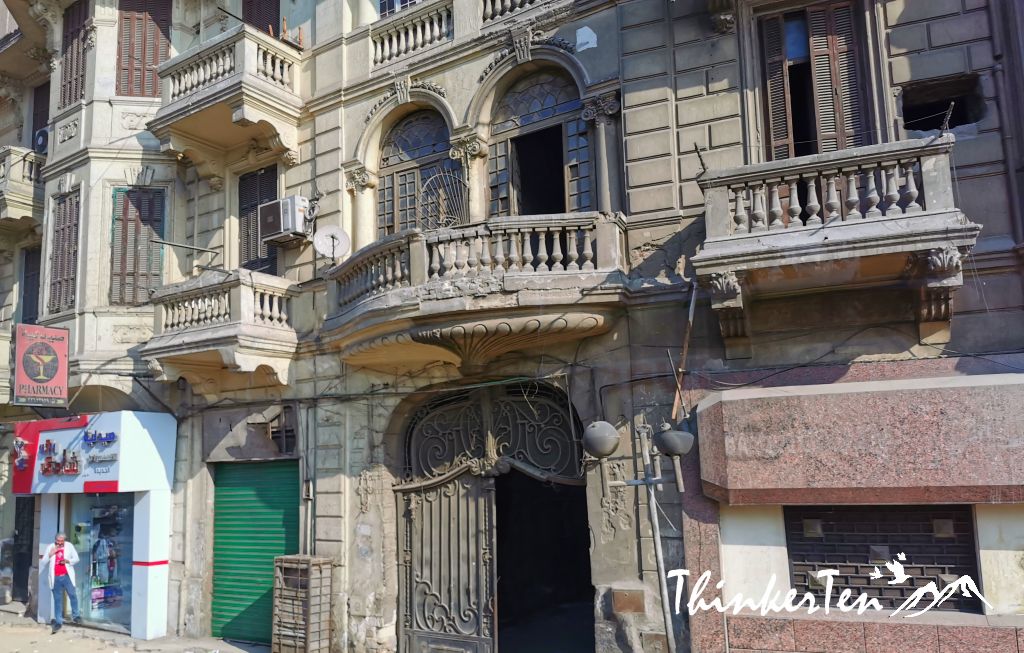 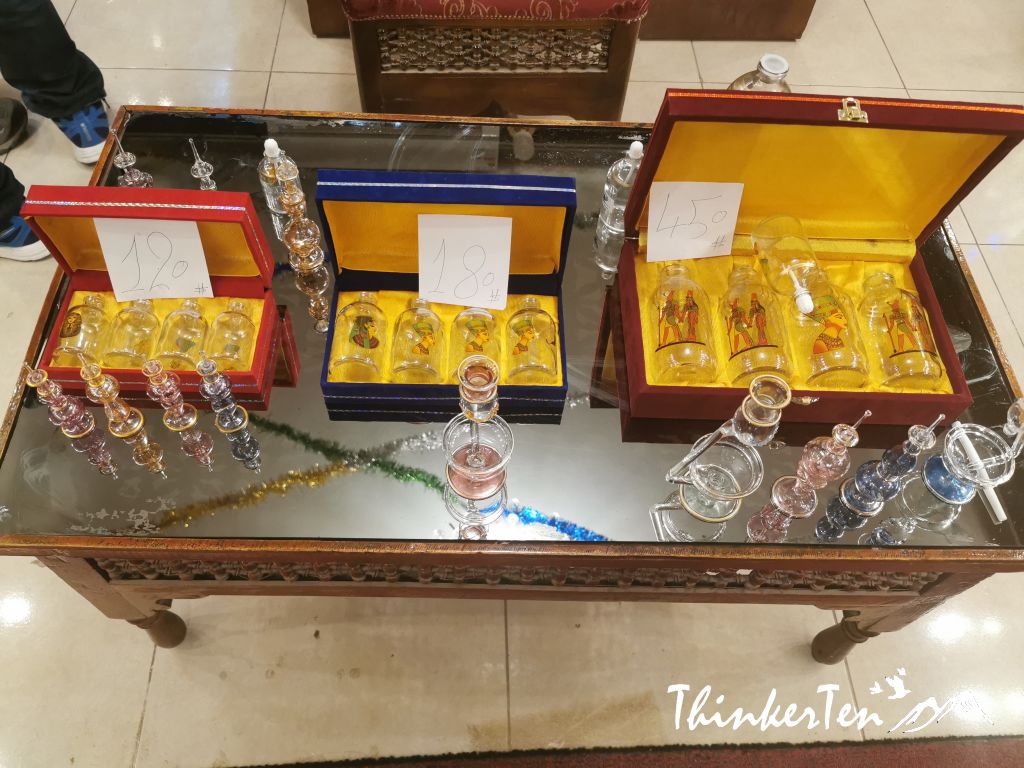 10. Arabic language is the national language

In A.D. 640, Muslims came from the Arabian Peninsula and conquered Egypt. They founded the city of Cairo in 969 and made it their capital. The Arabic language are used for daily communication. English is also widely used in tourism probably also due to British colonization. The majority of the road signs in Egypt are written both in Arabic and English.  Today nobody understands and uses hieroglyphics in Egypt, except Egyptologists. 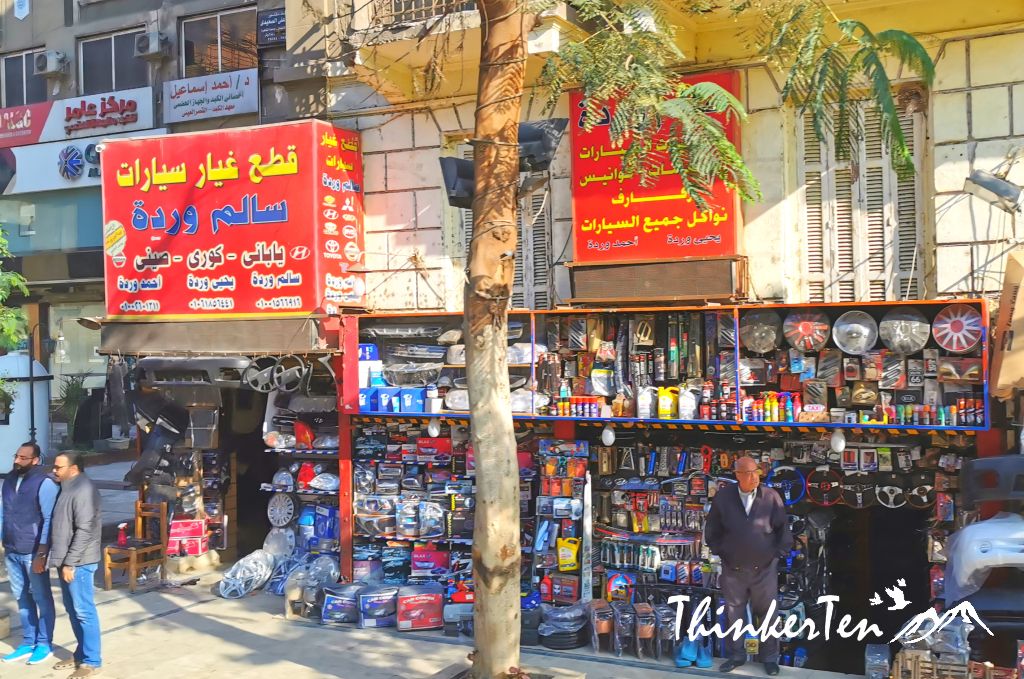 Women have traditionally been preoccupied with household tasks and child-rearing and have hardly seen outside the family. Not all women are covered with the black robe and veil from head to toe. These days Egyptian women attend school in equal numbers and marrying later.

Have women achieve equality as men, not quite yet.  Many of the sellers in the shops are mostly men. 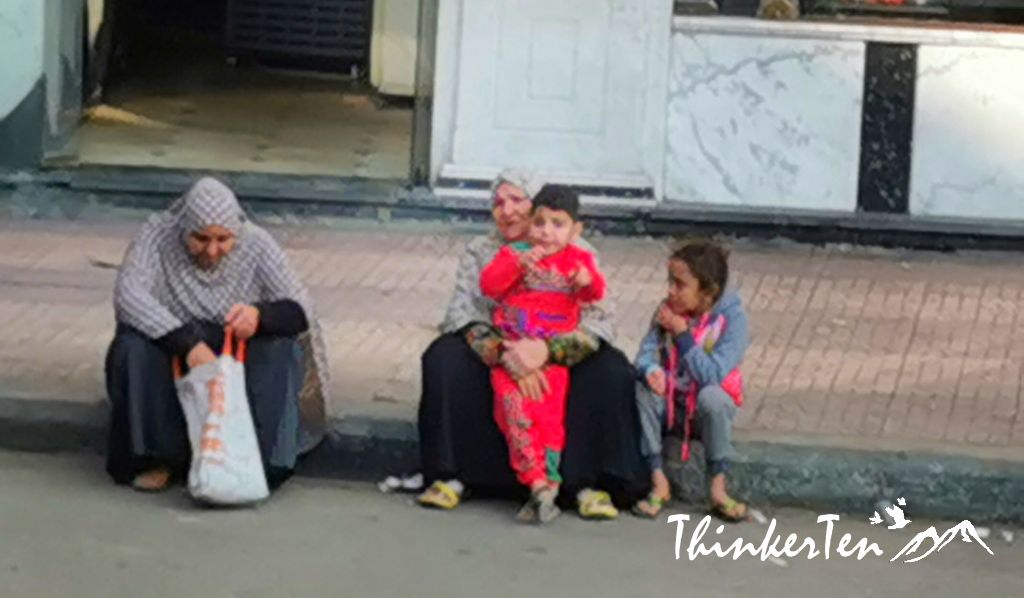 12. How important is River Nile?

It was said the Nile River is the longest in the world. For thousands of years, the river has provided a source of irrigation to transform the dry area around it into lush agricultural land. Imagine over 95% of Egypt is the desert landscape and you could tell how important is River Nile. The river is also an important transportation route so you should experience the River Nile cruise when you travel to some of the ancient cities such as Aswan and Luxor. In fact, the River Nile was the highway that joined the country together. 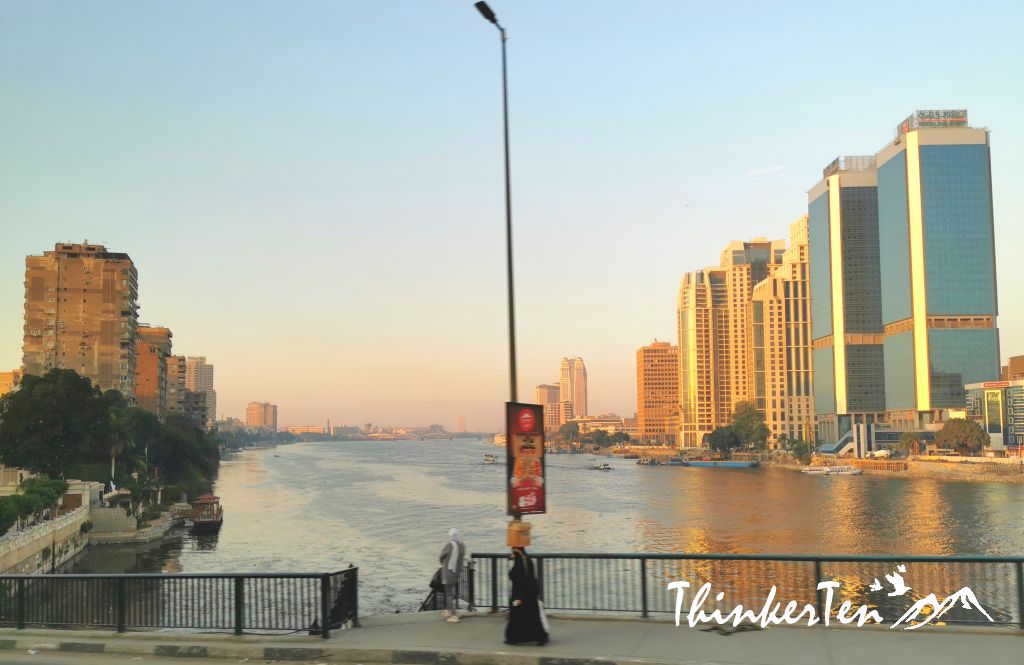 Mall of Egypt houses the best local and international retailers including high-end fashion and dining brands. The mall is huge and very clean, unlike the other places we went in Egypt. I strongly suggest you go into the local Carrefour supermarket to check out what do the local Egyptians eat and use. You can also get your Egyptian desserts from the supermarket here, well packed, at a reasonable price. 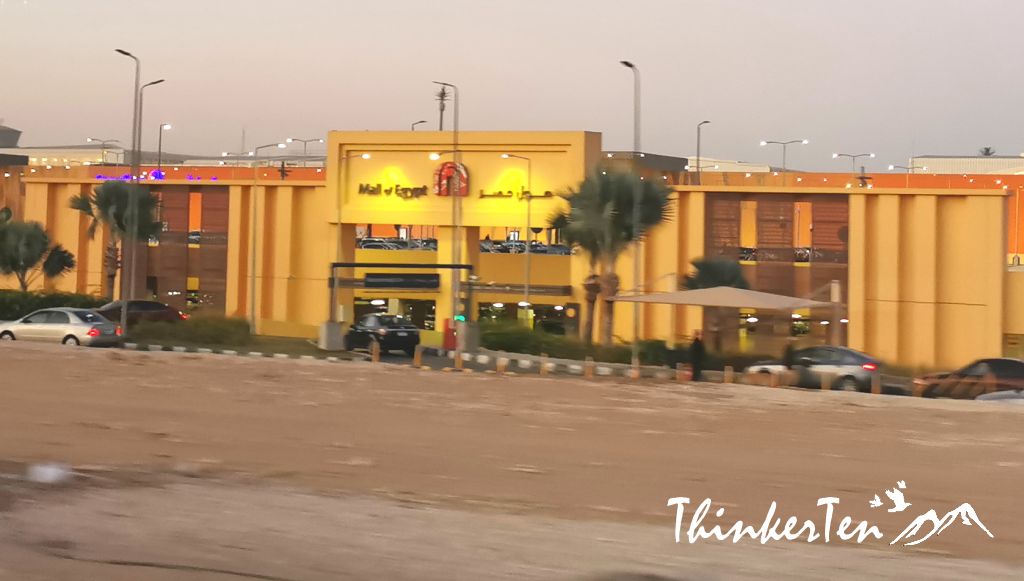 Traveling to Egypt has changed my perspectives on life. I have never seen so much poverty in my life.  It is heartbroken. It has made me realized how lucky I am. This has taught me to be more grateful for the things that I have and be more appreciative for the thing that I normally take for granted. Most importantly I am able to see everything with my own eyes and experience the moment. In fact, many times, what I hear from the news or read is not the same when I see it with my own eyes here.

Your post has brought back some lovely memories as we went to Egypt about 10 years ago now. The floating restaurant looks amazing I wish we had known about it when we were there. The shopping was great too, but you had to be good at haggling!

That floating restaurant idea is one that intriques me. I would be a tad bit afraid, but I would certainly try it.

I am loving all of the fabulous pictures! I for sure would love to experience Egypt for myself and have added it to my travel bucket list 🙂 I cannot wait for things to get back to normal as I need a vacation! Thank you for sharing!

I am so intrigued by all things Egyptian and I always wanted to go and experience it, and so I’m stoked about this post. I also would love trying a floating restaurant…may be scared but I think that’s an experience I’d never regret.

This is a very helpful list. I know a couple of people who have been to Egypt and they loved it.

Wow, you covered a lot of interesting topics here that I otherwise would not have thought about. Egypt looks like such a unique country to visit and I would love to go!

I’ve never been to Egypt before. This is some really interesting information.

Thank you for this information about Egypt. I especially like the cool floating restaurant 🙂 – Dan “Jay” Reyes

I love this. This is actually really handy as we are planning on visiting Egypt so appreciate all the ideas x

I’ve got friends who visit Egypt every year, I’d love to take a trip one day so much to see and explore.