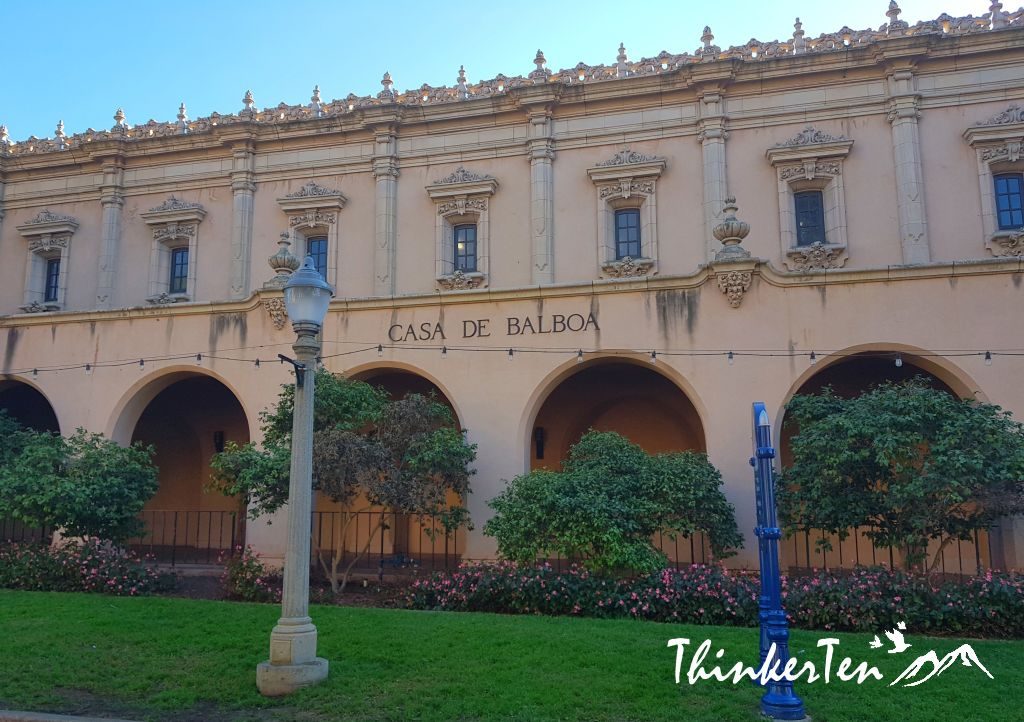 Balboa Park San Diego is one of the top attraction in San Diego. There is no entrance fees for the park which is  good thing!  About 15 museums, few theatres, gardens & a Zoo all located in the Balboa Park.  The architecture of the buildings in Balboa Park are mostly Spanish influence architecture! These buildings were built originally  for the Panama–California Exposition in 1915 so expect to enjoy the old antique architecture.  Now these buildings are used as Museum.

We have managed to explore 12 attractions and you should also plan before visiting Balboa Park.

In LA there is Griffith Park and here at San Diego, you have Balboa Park!  The park is the largest urban park in North America. 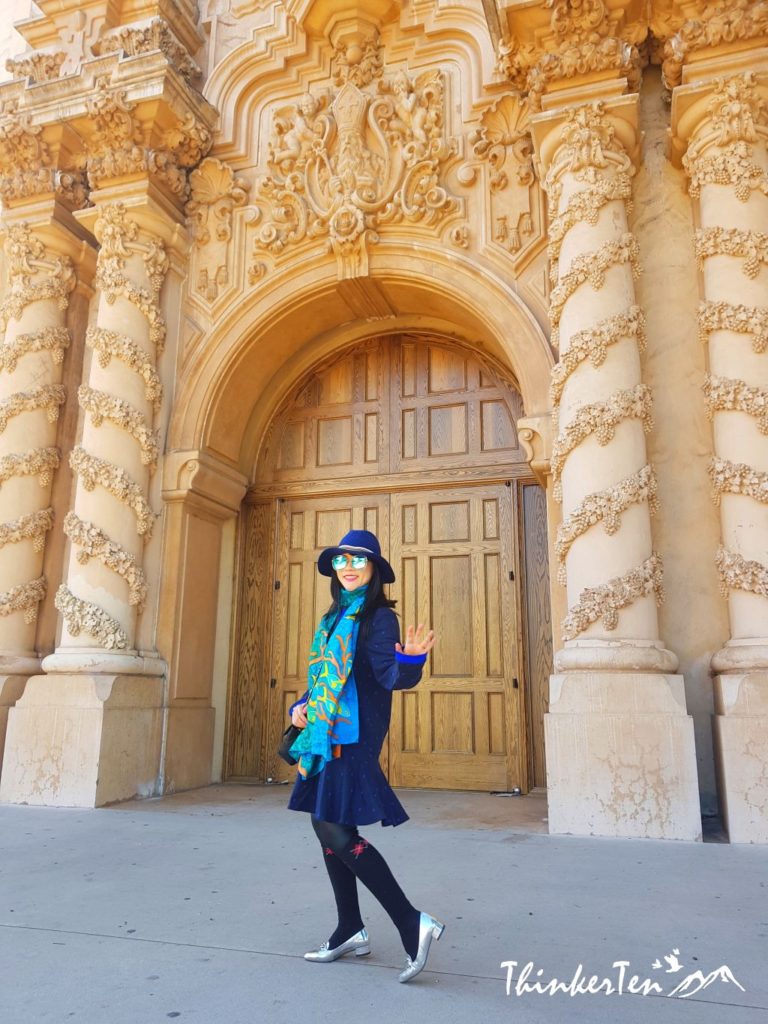 Balboa Park is named after a famous Spanish explorer, Vasco Núñez de Balboa who was the first European to lead an expedition to reach the Pacific from the New World.  Before that, it is called as “City Park”, pretty boring right?  I prefer the new name!

The Spanish Village is located near the San Diego Zoo, used as an art destination by a group of dedicated artist. Once you enter the Spanish Village, you will notice the village has vibrant colors, especially at the courtyard which has the rainbow color concrete tiles plus flower & cacti. 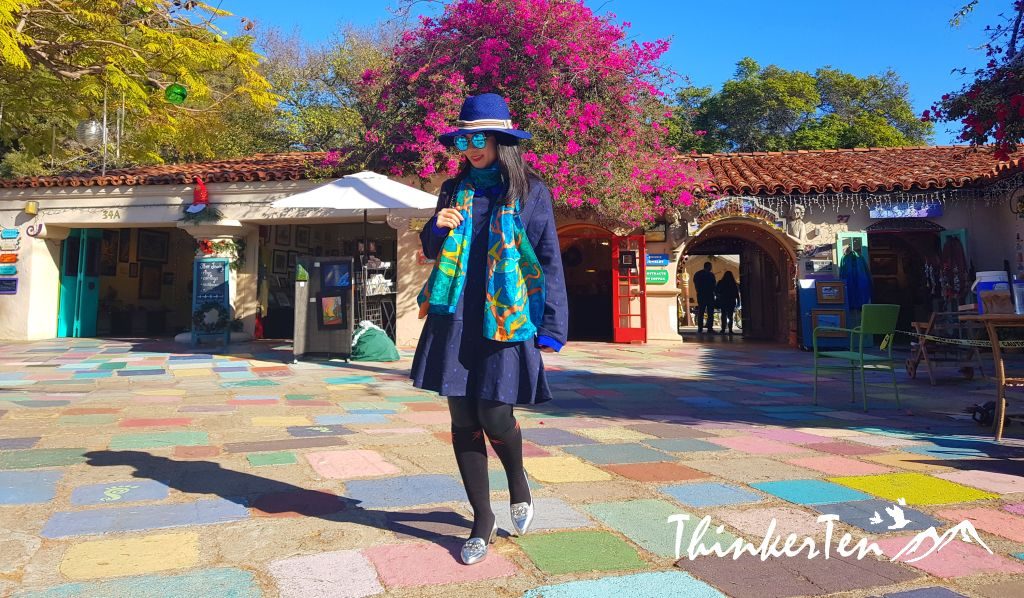 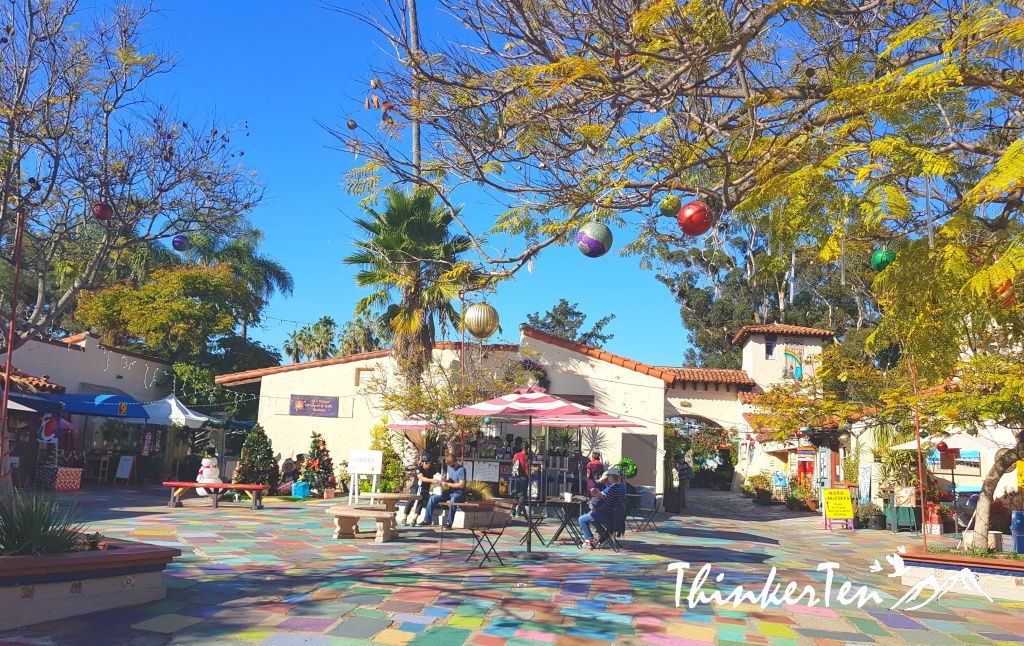 What caught my attention in this village is still the rainbow color concrete tiles at the courtyard. 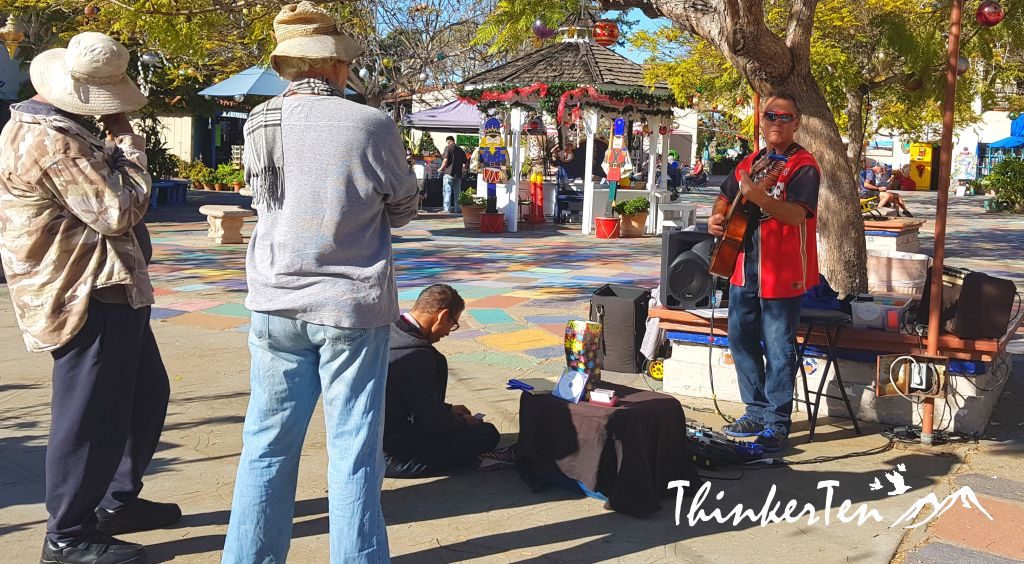 About 37 Art Studios in Spanish Village!  This is also a place to get some souvenirs.

Some of the artists here now are descendants of the original artists who founded the village.  You can walk freely into these studio and look at their art piece, from painting to ceramic or glass and many more. 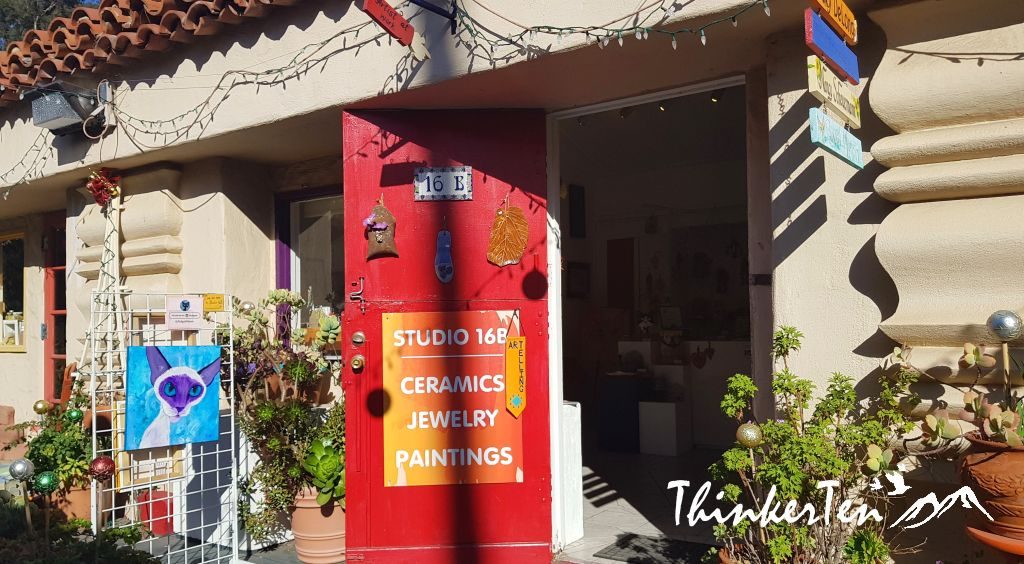 The entrance is free for Spanish Village Art Center so go in to have some Spanish vibe while you are at Balboa Park. 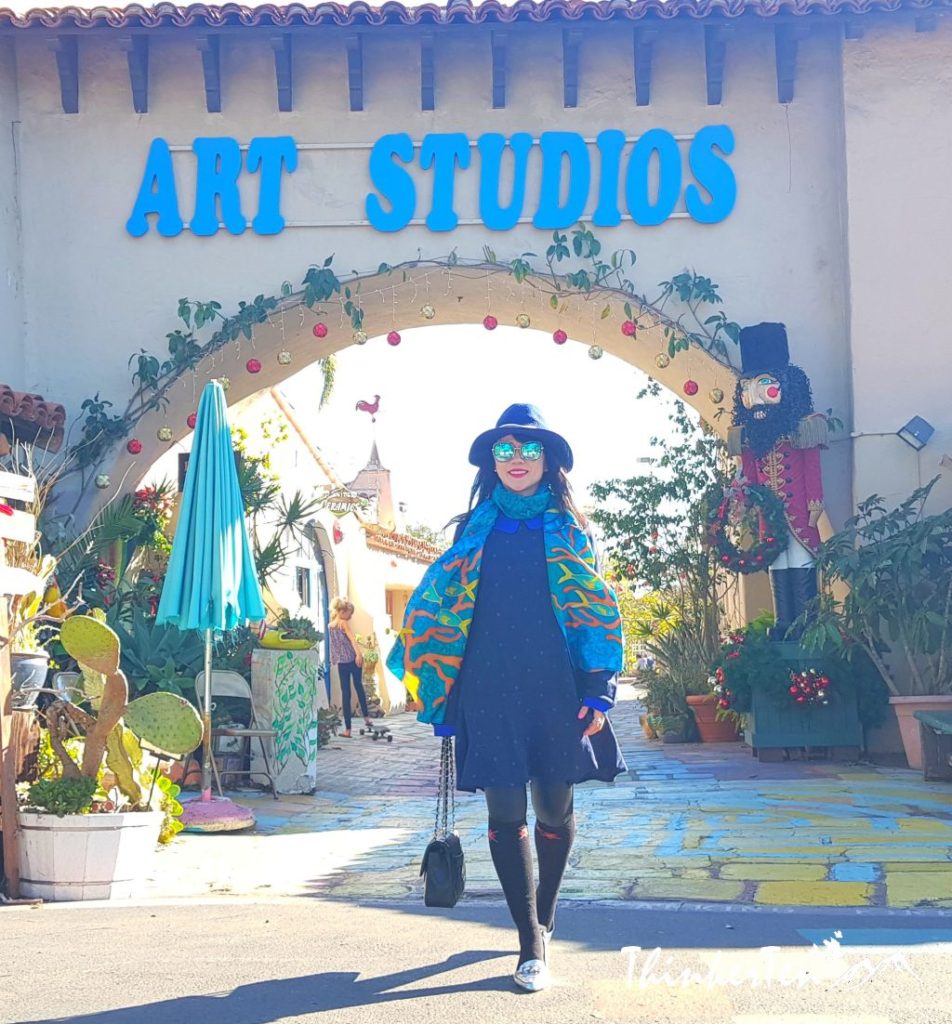 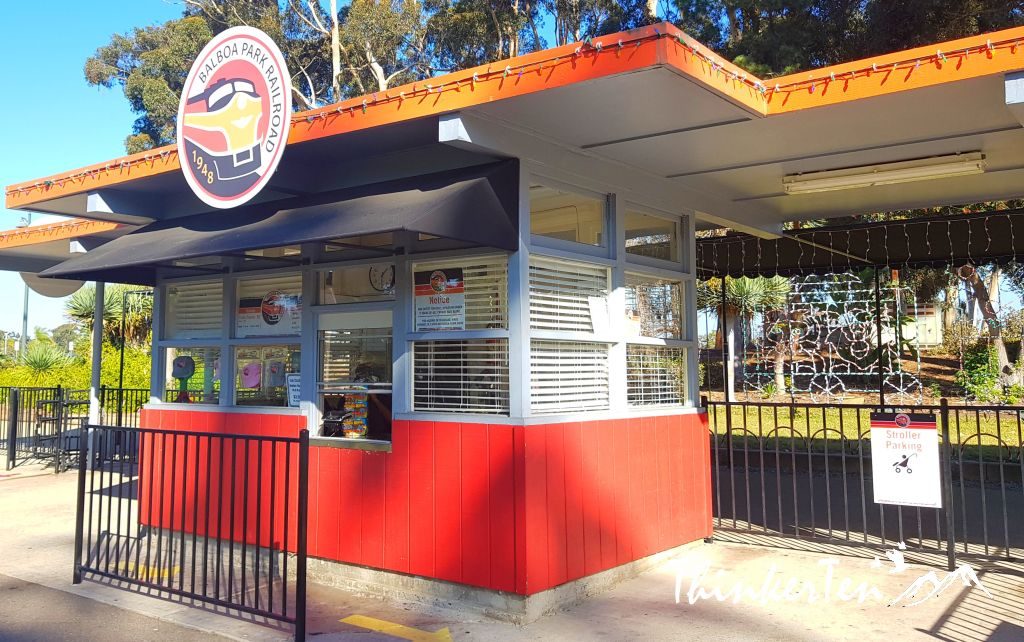 There is a miniature train run just a small portion of Balboa Park. 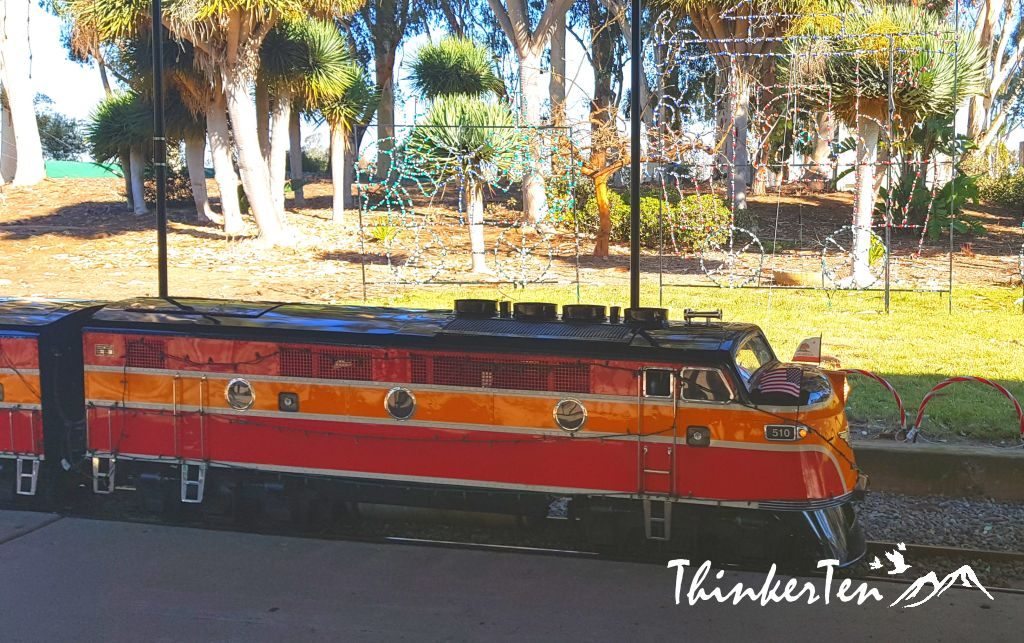 The duration is about 3 minutes and this miniature is a rare antique which is still able to function! 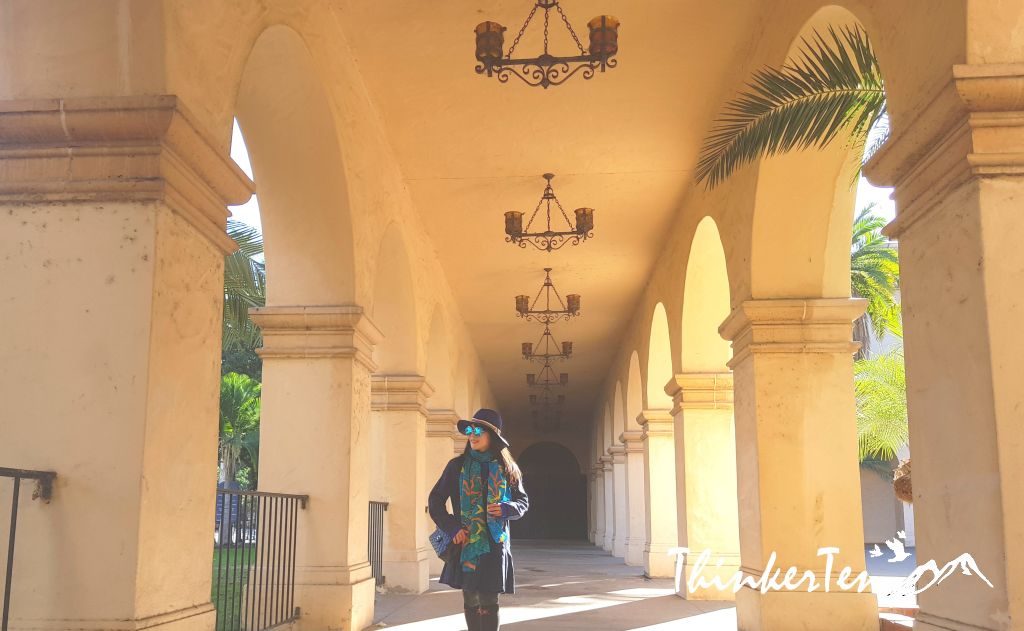 You can smell the Spanish atmosphere here at Balboa Park, Spanish children ready to pose for their parent to shoot pictures. 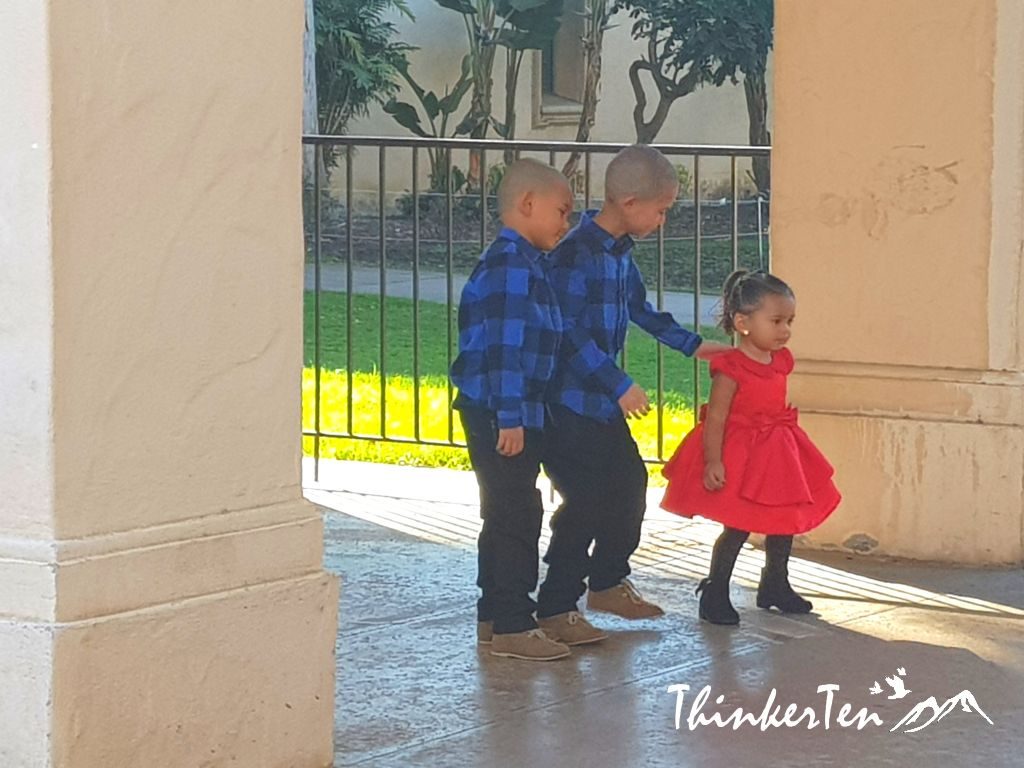 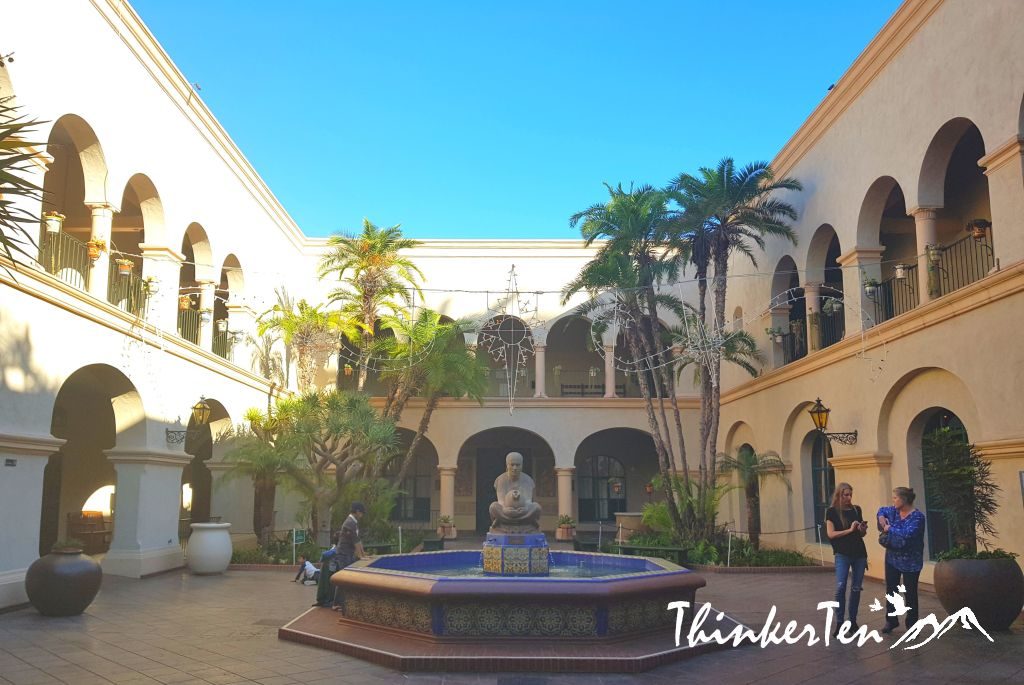 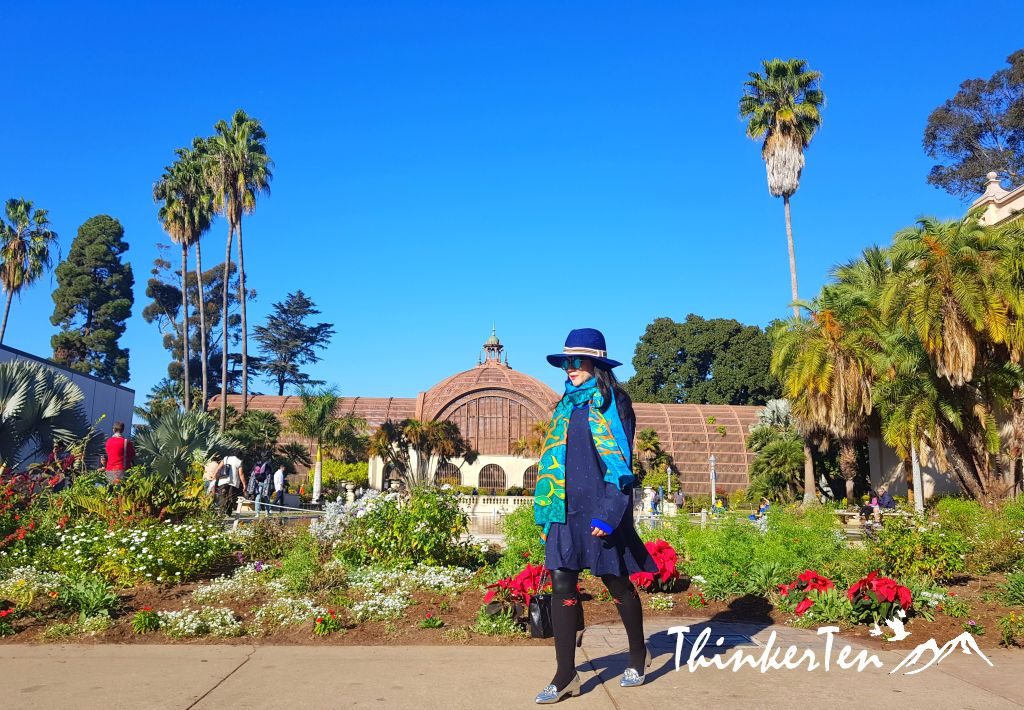 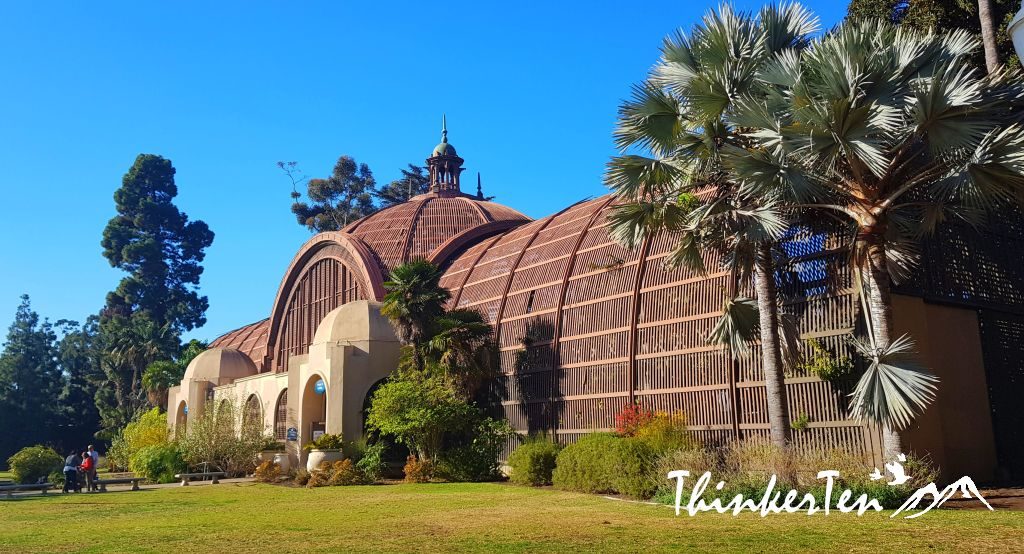 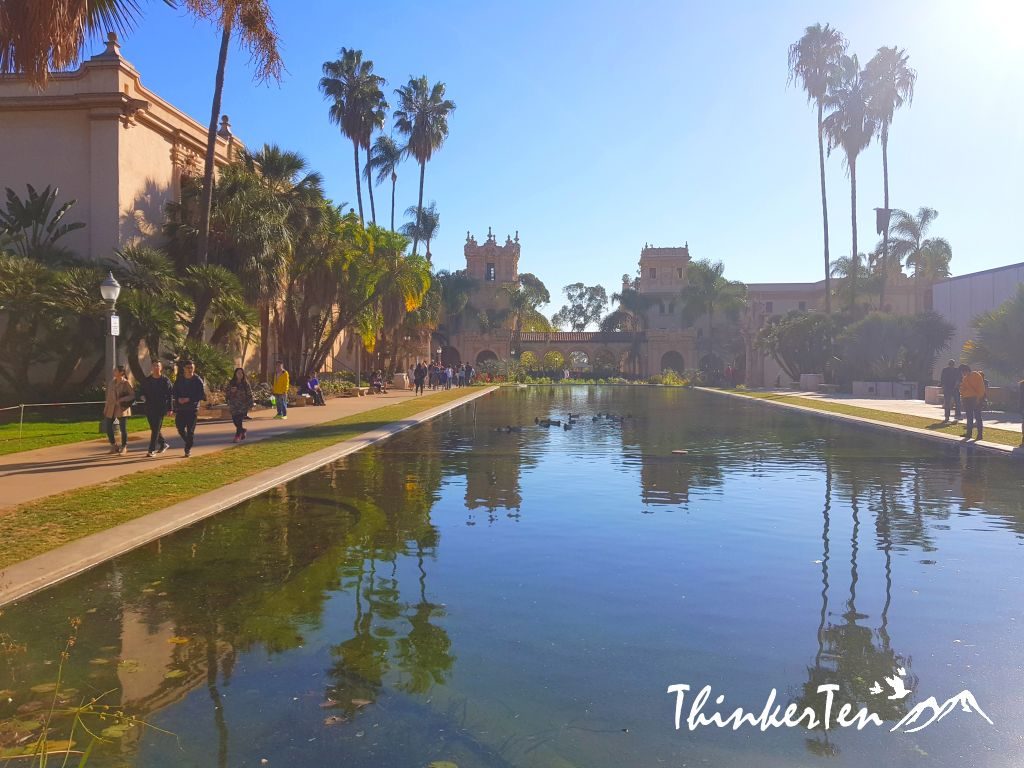 The pond here make a great landscape, you can see some reflection from the buildings and also some ducks or birds swimming in the big pond.

A huge fountain situated near the pond and the Botanical building. 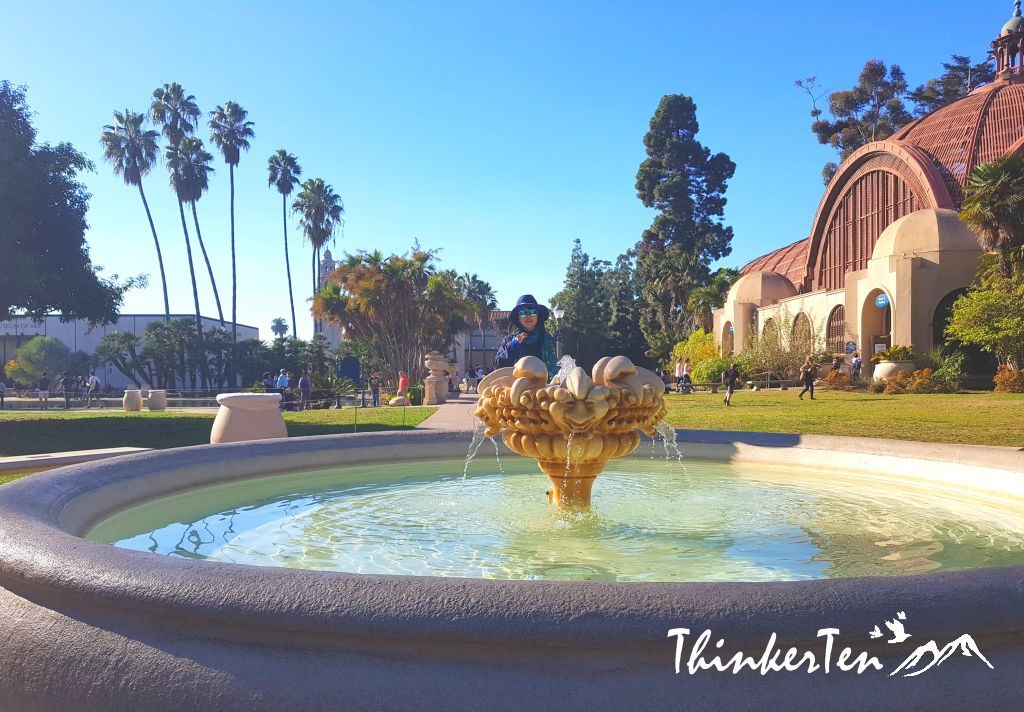 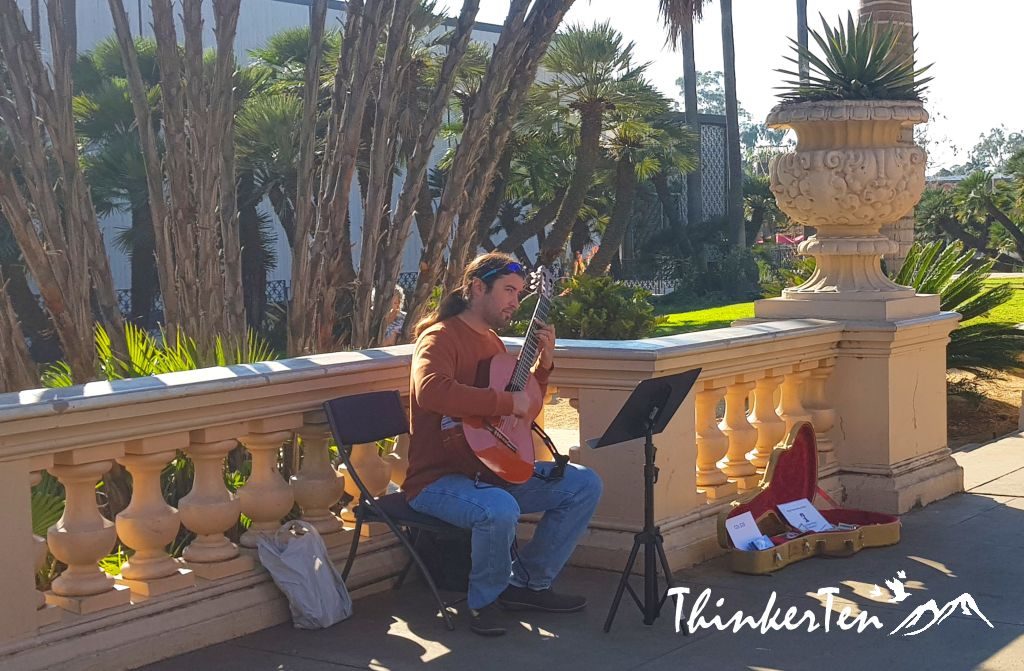 Children running for bubbles in the park. 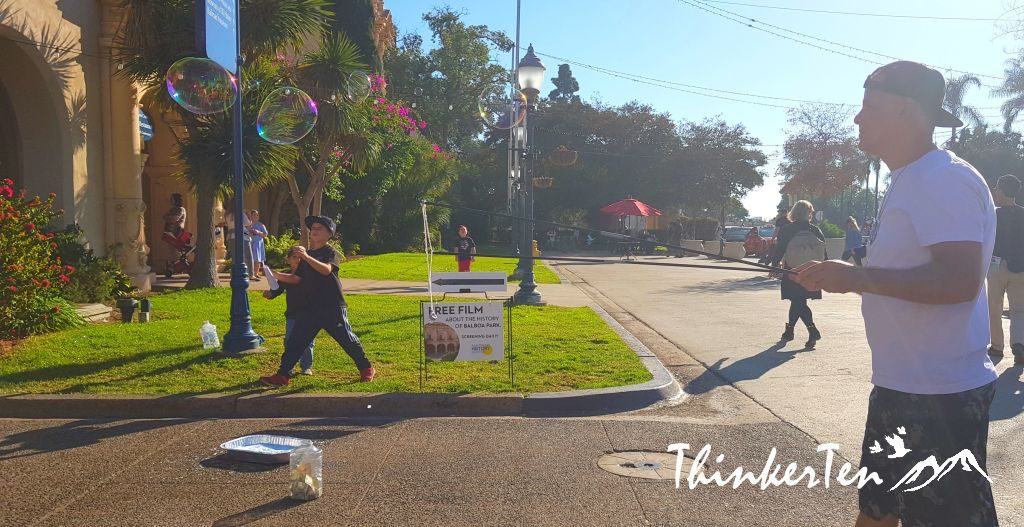 Bigger bubbles, run for it! Baby in purple. 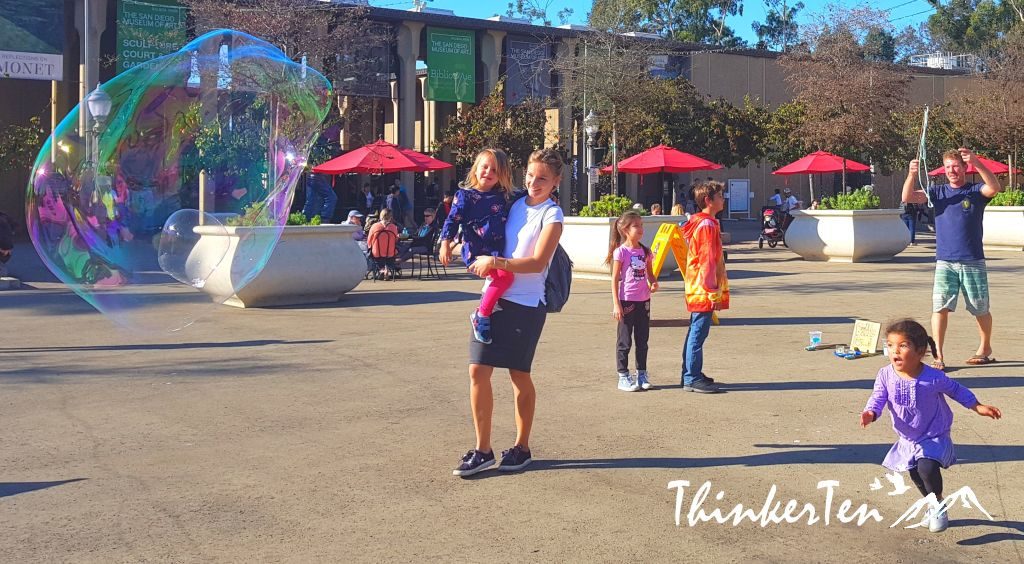 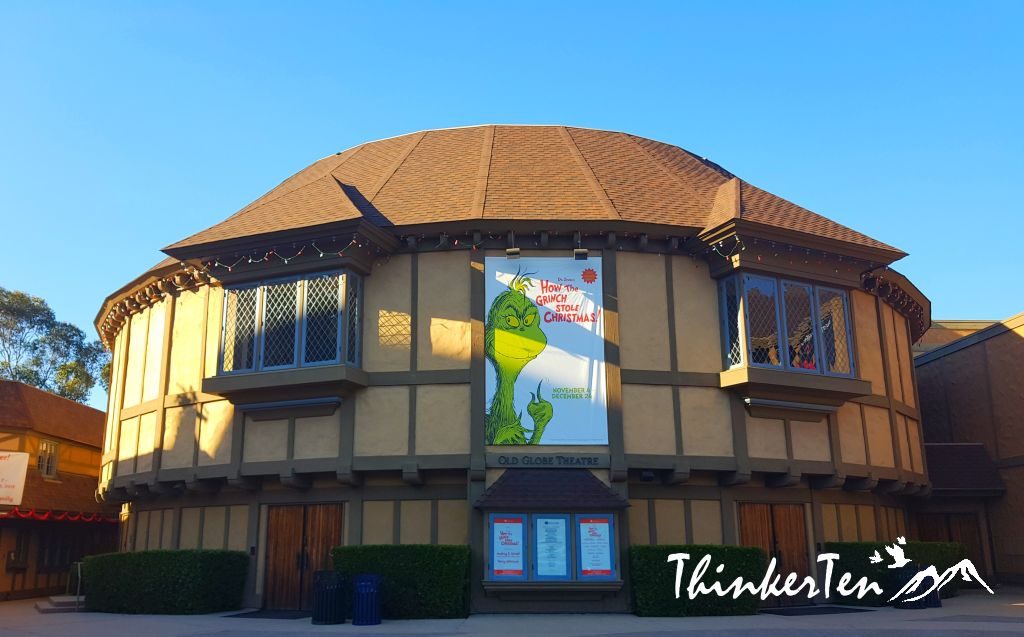 “How the Grinch Stole Christmas” musical production was shown when I was there, during the December Nights festival in Old Globe Theatre. 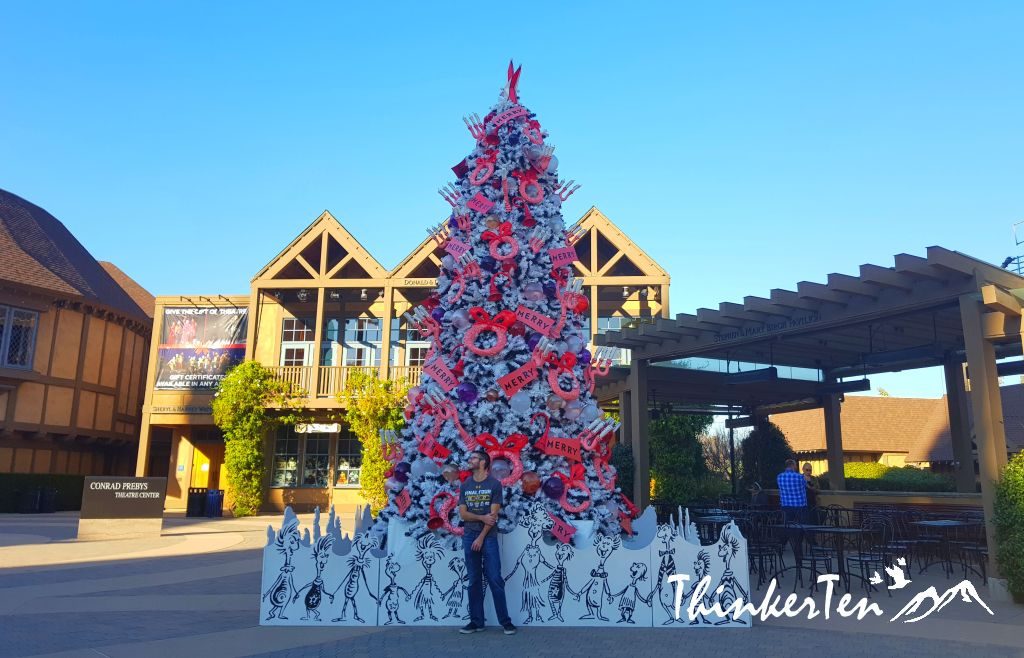 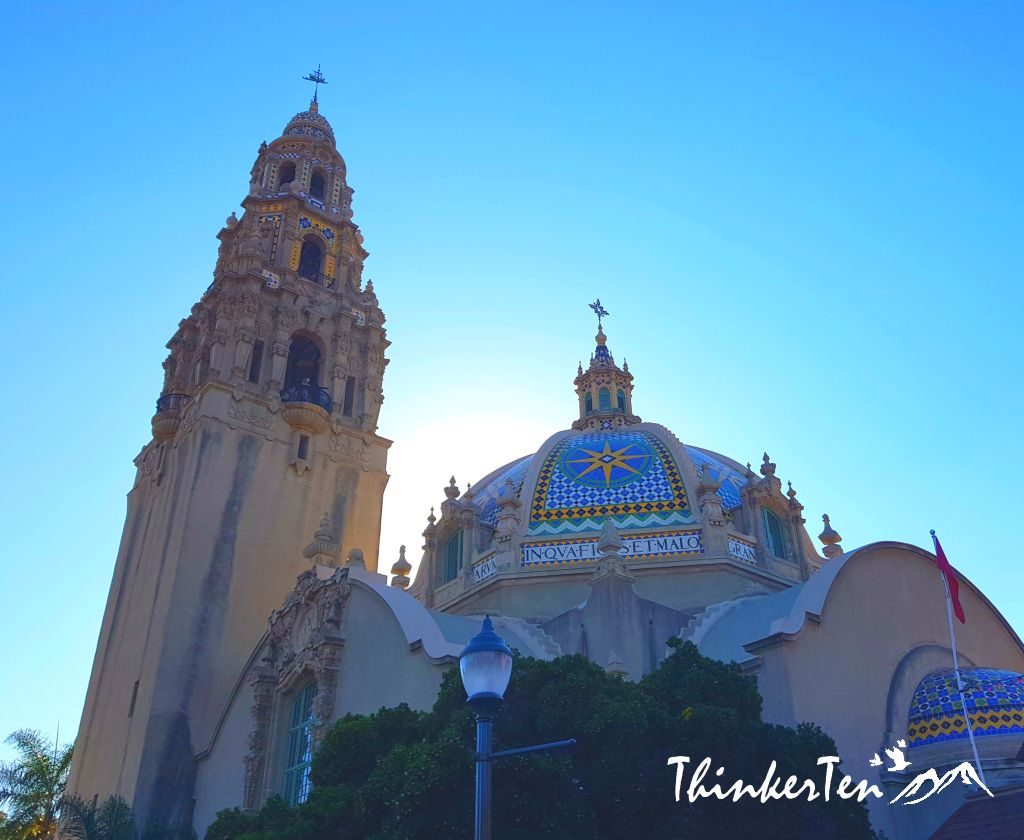 Museum of Man has one of the nicest architecture in Balboa Park which include a dome & a tower. 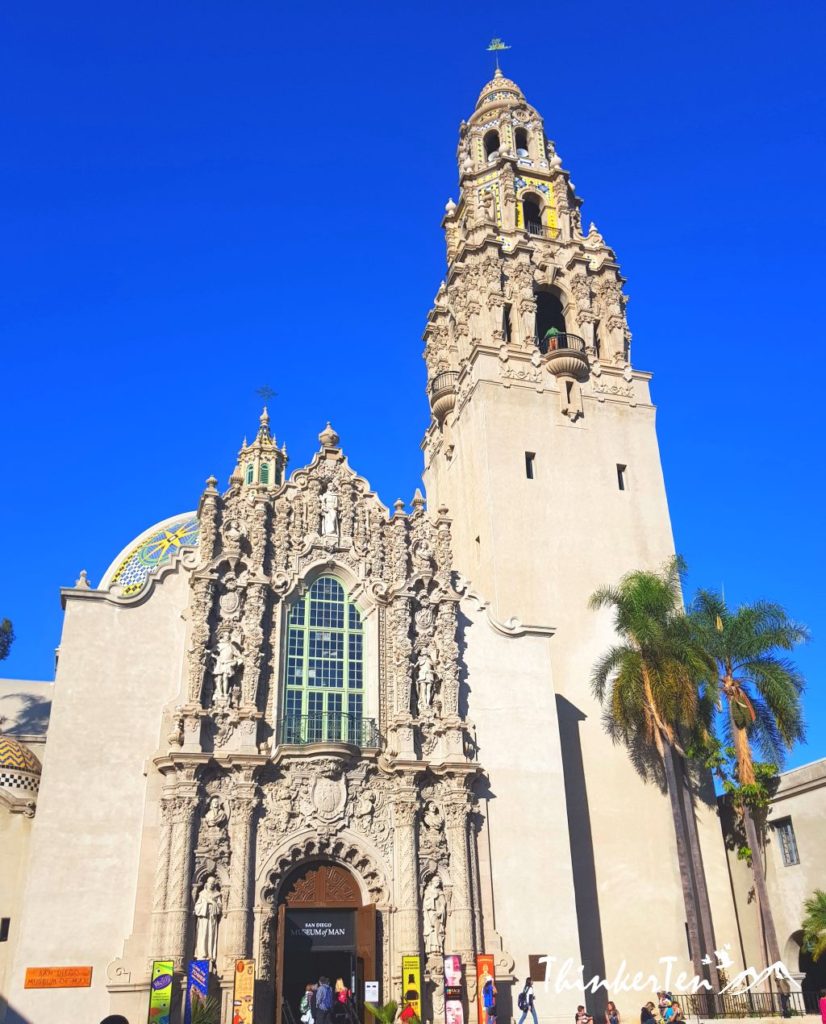 The word ‘mingei’ in Japanese meaning ‘art of the people’, the Mingei Museum exhibits for art, craft and design. 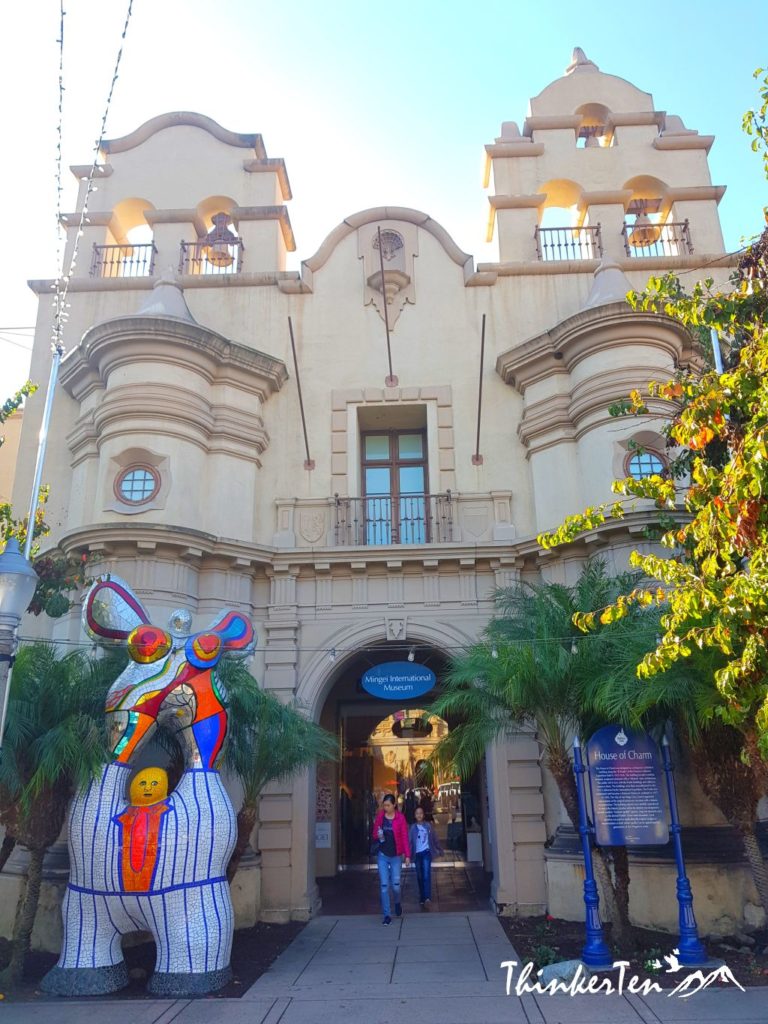 Concert held here are free throughout the year.  If you are coming at the right timing, you may be able to catch some free concert at this open air theatre. 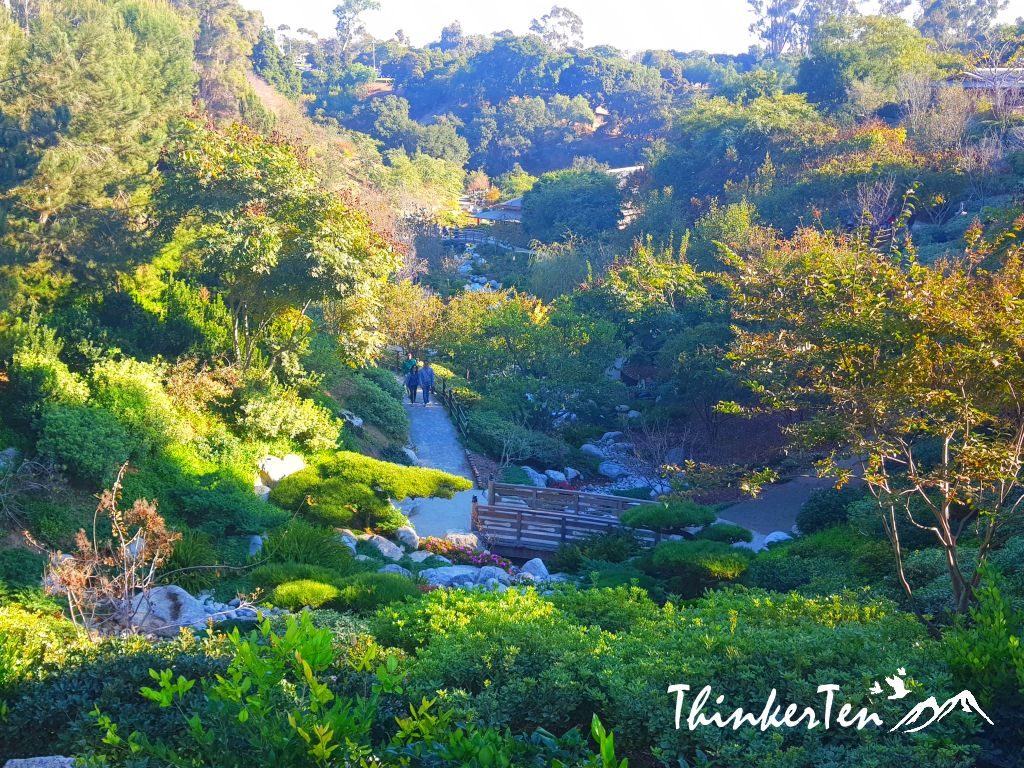 The statue of El Cid of a medieval hero of the eleventh century, located at the entrance to the Plaza de Panama.  The statue is quite striking.

Go spot this giant tree called Mereton Bay Fig Tree, is the largest of Ficus plant in Balboa Park. It was planted as a small tree in a garden back in 1915 for the Panama-California Expo and now became a giant after more than 100 years.  When I passed by this tree, I felt it was unusual & huge so took a picture of it then only realized it was not an ordinarily plants in Balboa Park.  This tree has some history! 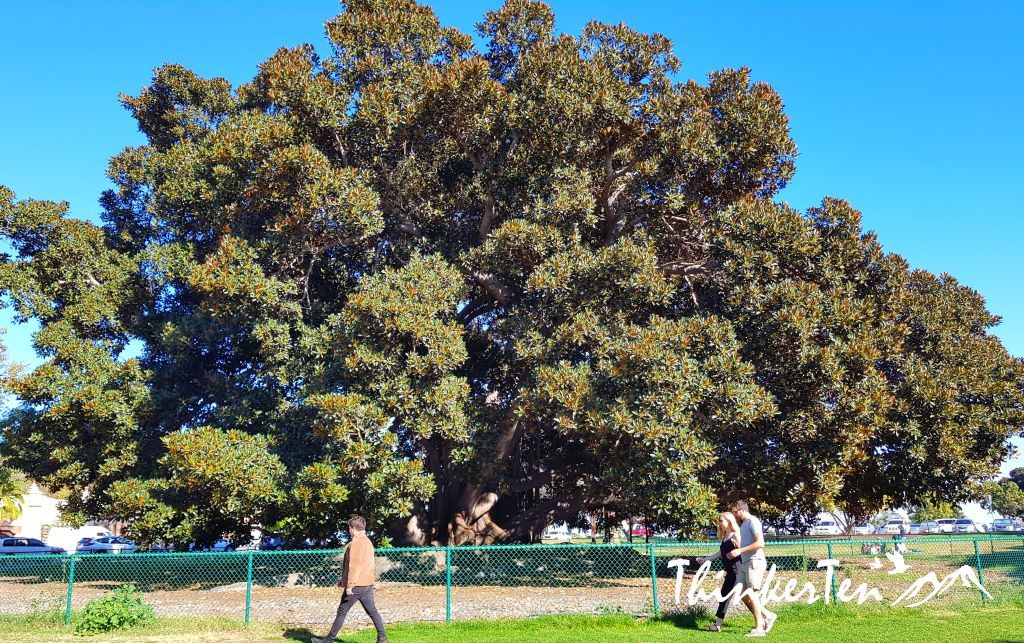 Where to eat in Balboa Park?

There are few restaurant in Balboa Park but we choose to have a quick bite at The Village Grill.  We ordered a burger & tender chicken & “fries”. 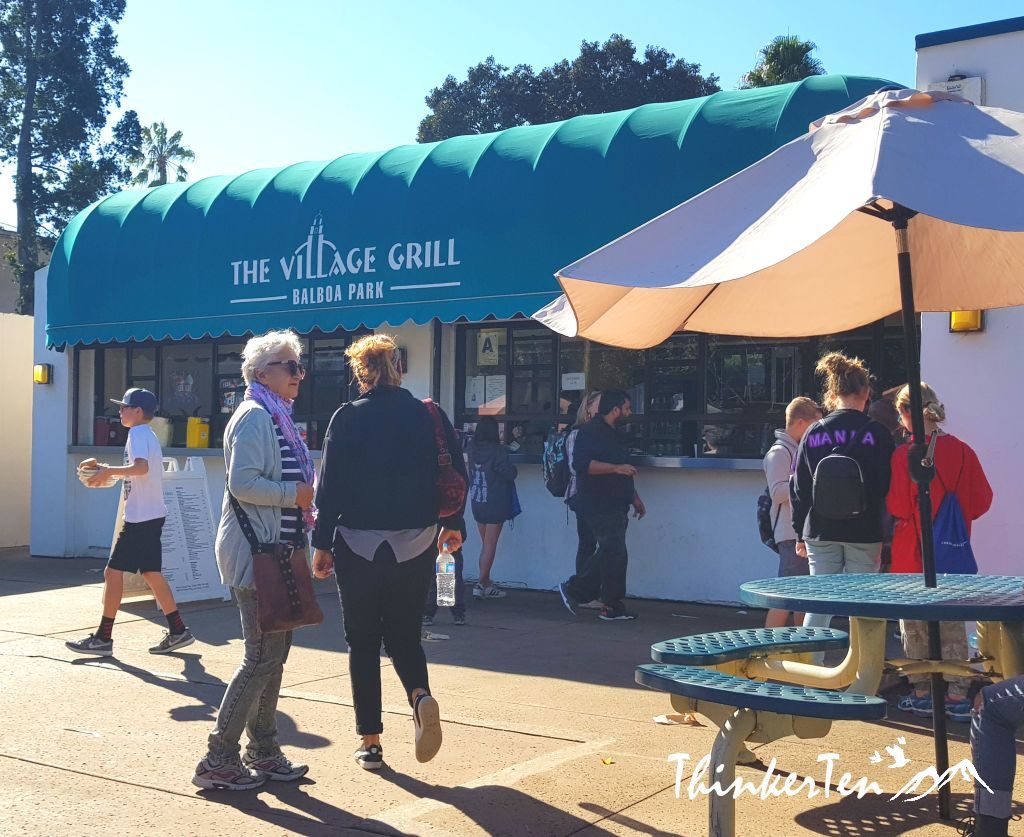 When  I made my order at the counter, I told the lady “and chips” please and she show me 4 type of packets of Lays Chips in different flavor.  Then only I realize I should tell her “fries”.  Well in Australia & UK, they called it chips or hot chips – the fried potatoes.  I was shocked and laugh when they give me the packet of Lays chips. 🙂  She happily changed the “fries” for me, seem like a lot of tourists made the same mistake like me. 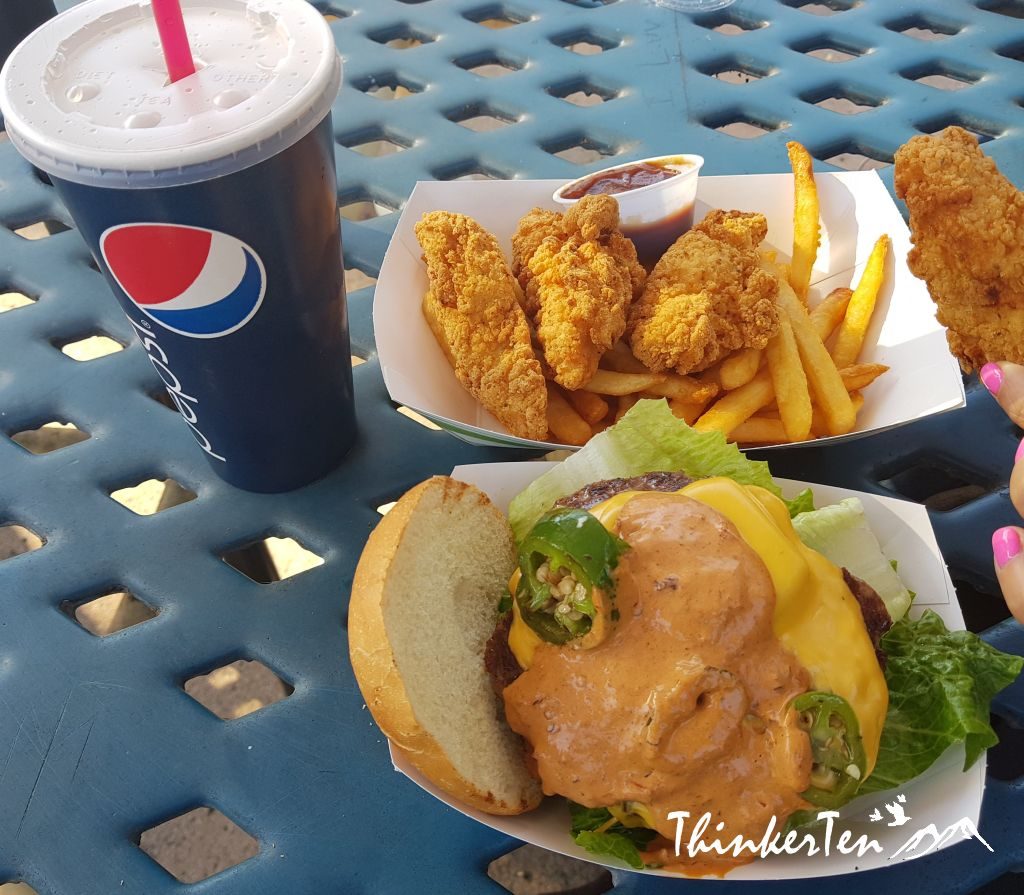 Balboa Park is so huge that you could spend days to explore.  You can imagine that as it consist of 15 museums, several theatre, garden, restaurants and San Diego Zoo.  You can choose one museum to visit and the rest you can just walk around the courtyard and take picture.  There is a fee to enter to most of the museum.  Even you don’t enter the museum, there are still plenty to explore around the courtyard of these beautiful buildings which were built for Panama-California Expo in 1915.  This is a park where nature meet culture!

I giggled reading about the chips. There’s always so much confusion over crisps, chips and fries lol. Great photos though, looks like such a beautiful place. The burger looks delicious!

I was shocked when Lay chips in the packets were given to me. I guess this is part of the fun part about traveling!

That sun is amazing! I need warm and sun! The colors on all the buildings omg! Everything looks so nice! i need to visit san diego

There are many old buildings built which was used for the Panama-California Expo back in 1915. Mostly Spanish influence architecture and you will have a taste of Spain in Balboa Park San Diego.

Balboa Park in San Diego looks like a mammoth area with so many museums and other attractions. Your wonderful pics portray vibrant feel of the park, I liked immensely.

Dear Indu,
Thank you for visiting this blog. Balboa Park in San Diego is so big that it may take few days to explore every corner and every museum. It is not only park for leisure, it also has different museums with different theme, from motor cars to human science museum, art and many more. There is even open air concert where people can enjoy the free music. It is a wonderful place to spend.

Balboa Park looks amazing with so many incredible things to see and do that making time to spend a few days there would be great.

Oh wow Balboa Park looks amazing!! So many colours and so many wonderful things to so. I would want to spend a couple of days here seeing it all, the art to the beautiful surroundings. These pictures make my eyes very happy!

The art center sounds really nice. I would enjoy the railroad park too. That looks pretty cool.

The railroad cover very small part of Balboa Park but it is fun to sit on the antique train and very tiny too! One look like a giant when sitting in this little antique train. Art centre is pretty cool especially the colorful floor.

Oh wow Balboa Park looks like so much fun, the history here looks incredible and the place is so instagrammable!

Balboa park looks like an amazing place with endless options! Thanks for the break down. I have plans to visit San Diego soon, I always hear such great things about it.

There is so much to see! I love the look of the art museums though. I feel like I would be in there for hours!

I am totally loving your outfit and the pictures, you look so pretty. Balboa Park looks like an amazing and fun place, would love to visit this. A great mixture of history, art, science, and a lot more.

Wow!! Balboa Park looks pretty awesome and looks so much fun. I will definitely show this to my kids and to my hubby. They will surely love this place to visit. Such a great recommendation for me.

It’s such a beautiful place to visit especially for a morning to afternoon stroll. It’s peaceful, colorful and interesting! I like that they changed the name to Balboa Park.

This is such amazing place to visit this year. Balboa par looks so much fun. The ambiance of this place is so fulfilling.

ok now I want to travel to San Diego! And you look so shiny there! love it!

I’ve never been to San Diego so it was great to be able to “visit” the place through your stunning photos! The architecture of Casa del Prado is breath-taking, and I love how heavenly blue the sky is on every pic.

I love your photos. San Diego is definitely on my bucket list. I will keep these recommendations in mind when I go.

What a beautiful park to visit! Love the architecture and there’s so much to explore. I’d love to visit there one day.

The Spanish Village Art Center looks like my kind of attraction! I haven’t been to San Diego yet, but it’s definitely on my list to visit soon x